In my Basement Renovation introduction post, I outlined the COUNTLESS (okay, you can count them – five) options we considered regarding our faux wood paneled walls in our basement. 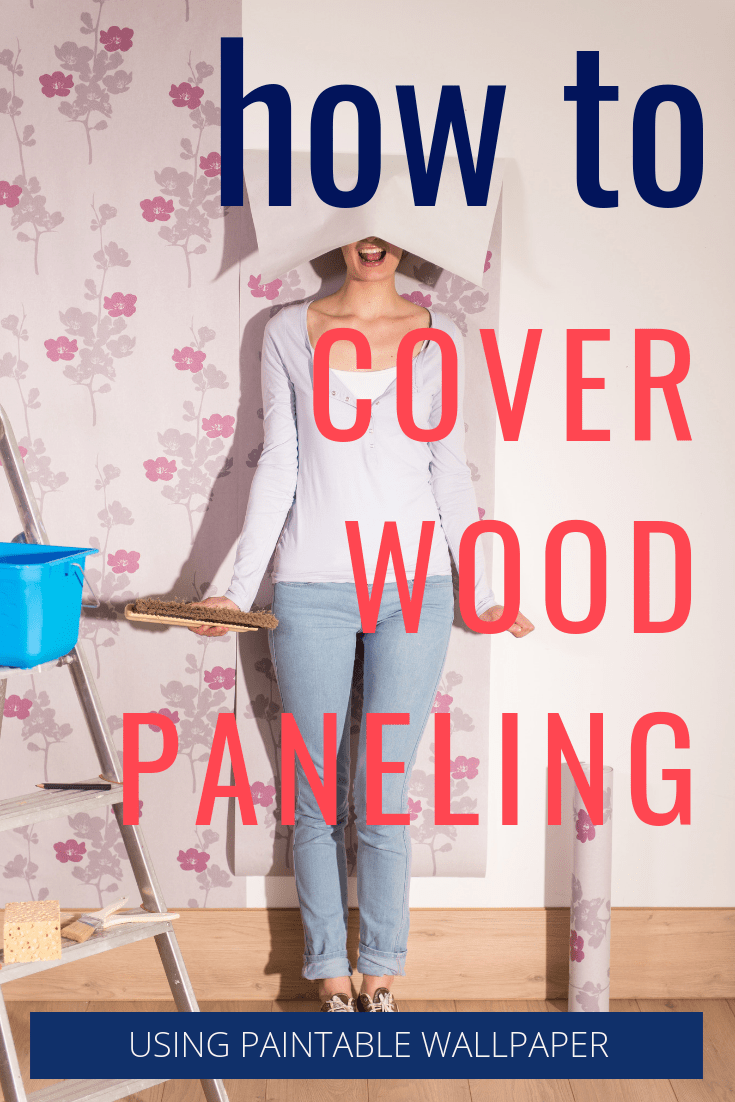 Once we decided on paintable wallpaper, I contacted three local wallpaper contractors that I found on Angie’s list.

It’s worth noting that we had this work done in September 2015. So, as of the time of writing this, we’re now 17 months past the wallpaper installation. And it still looks just as fantastic as when it went in!

There are a lot more “before” photos in our intro post, but here are some of the paneled walls again, just for reference: 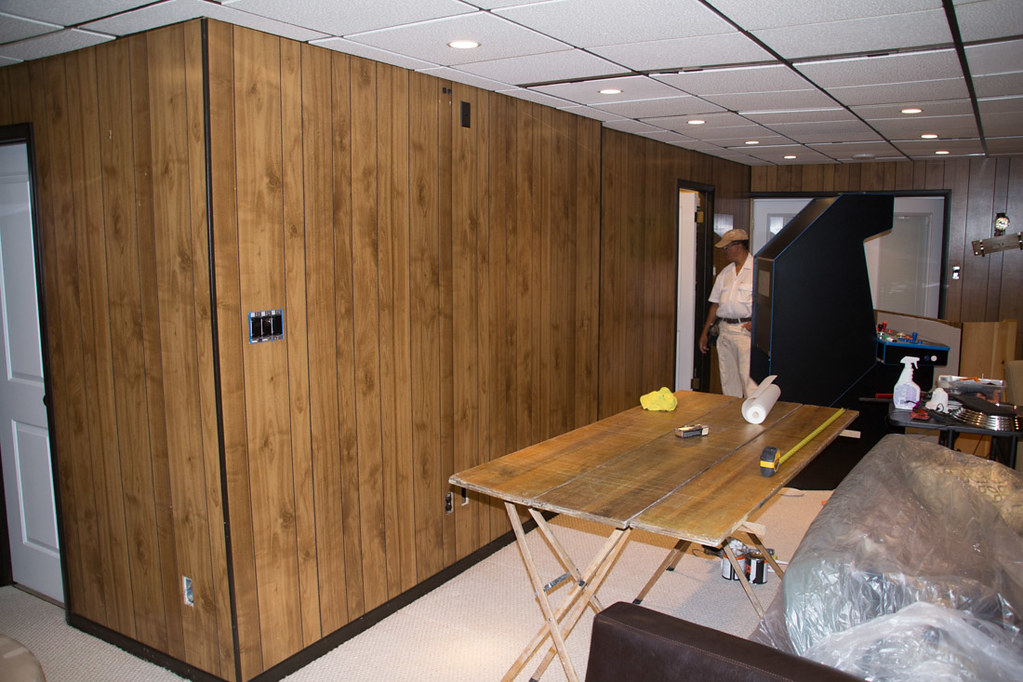 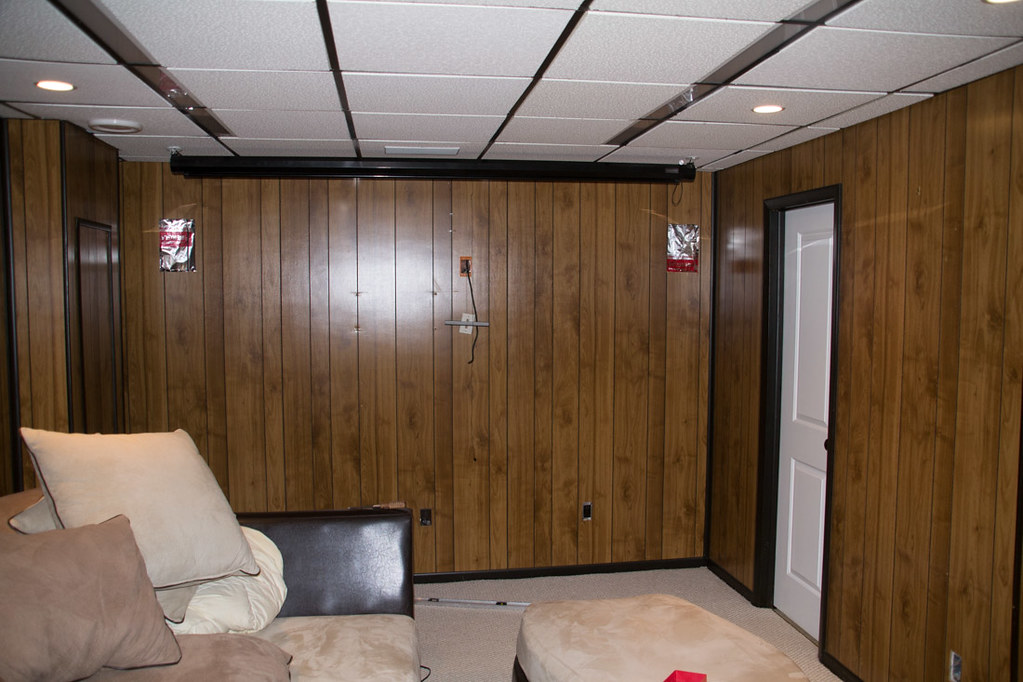 Then, the wallpaper installation began. 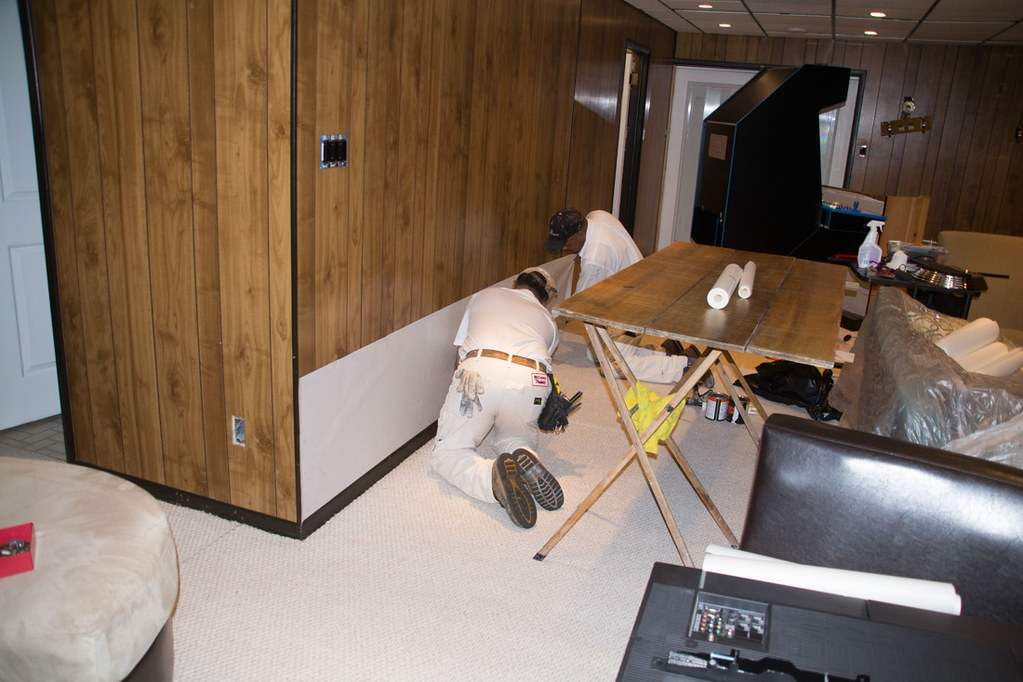 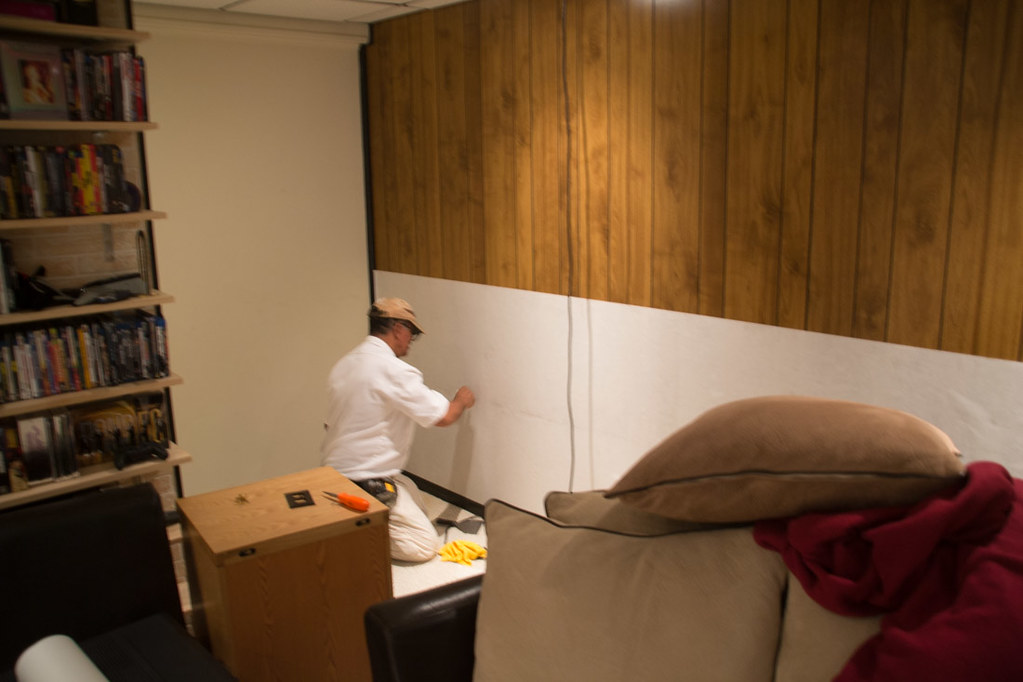 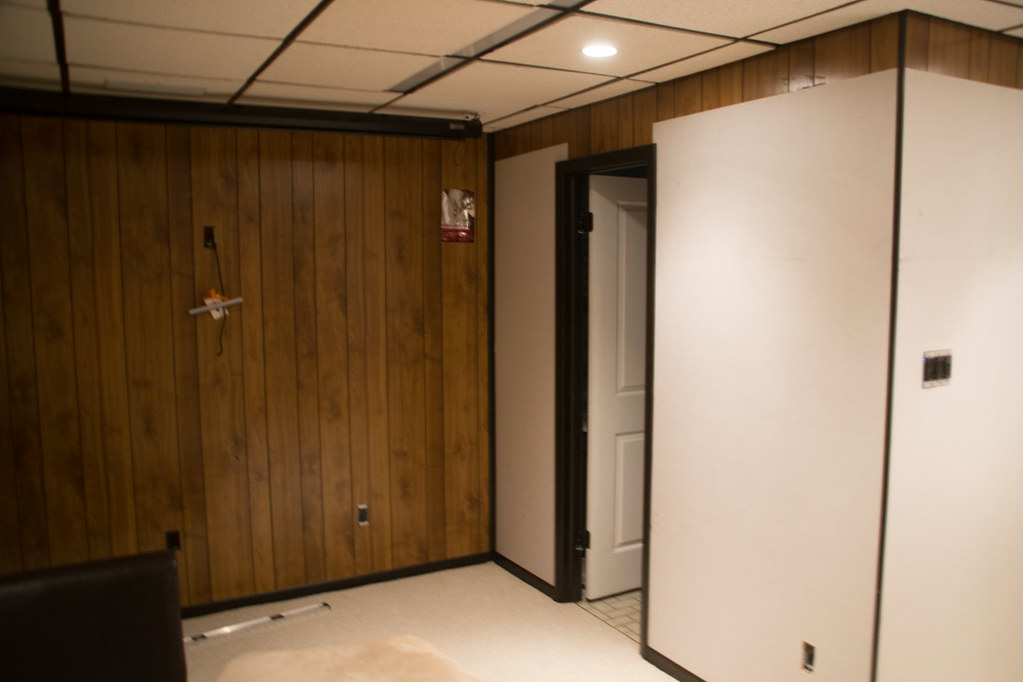 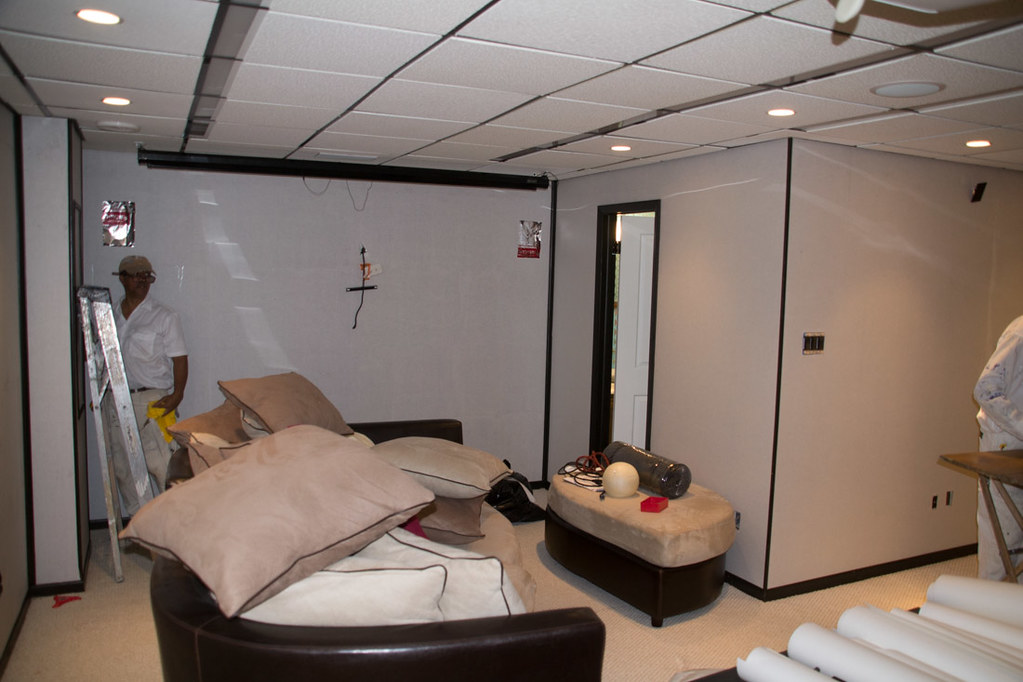 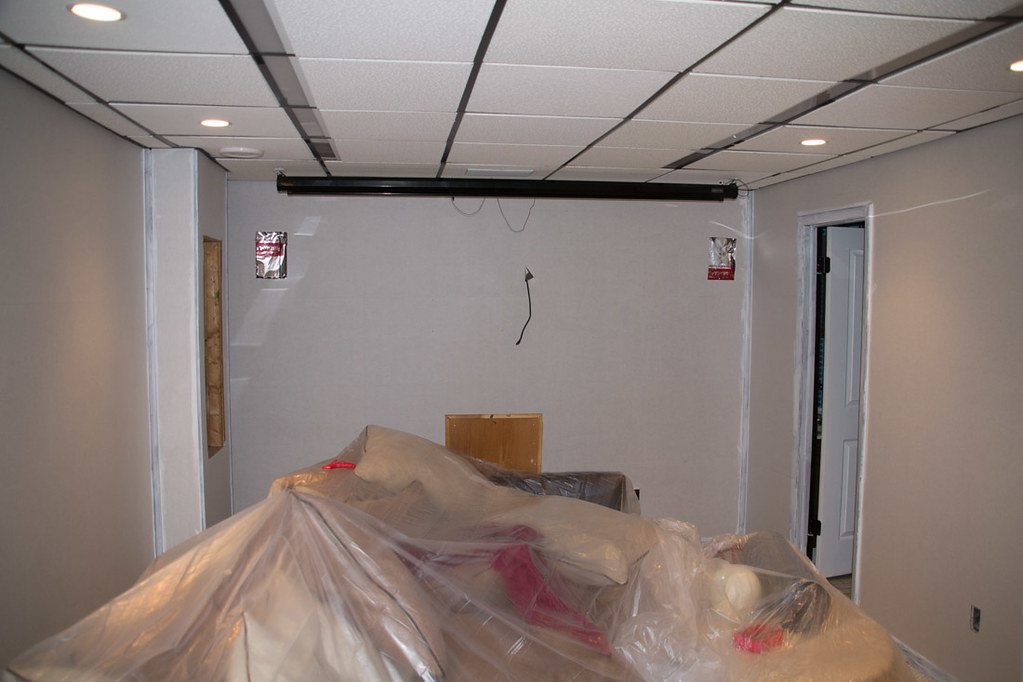 It was an incredible transformation to witness. Even before the wallpaper was painted, our basement looked like an entirely new room. 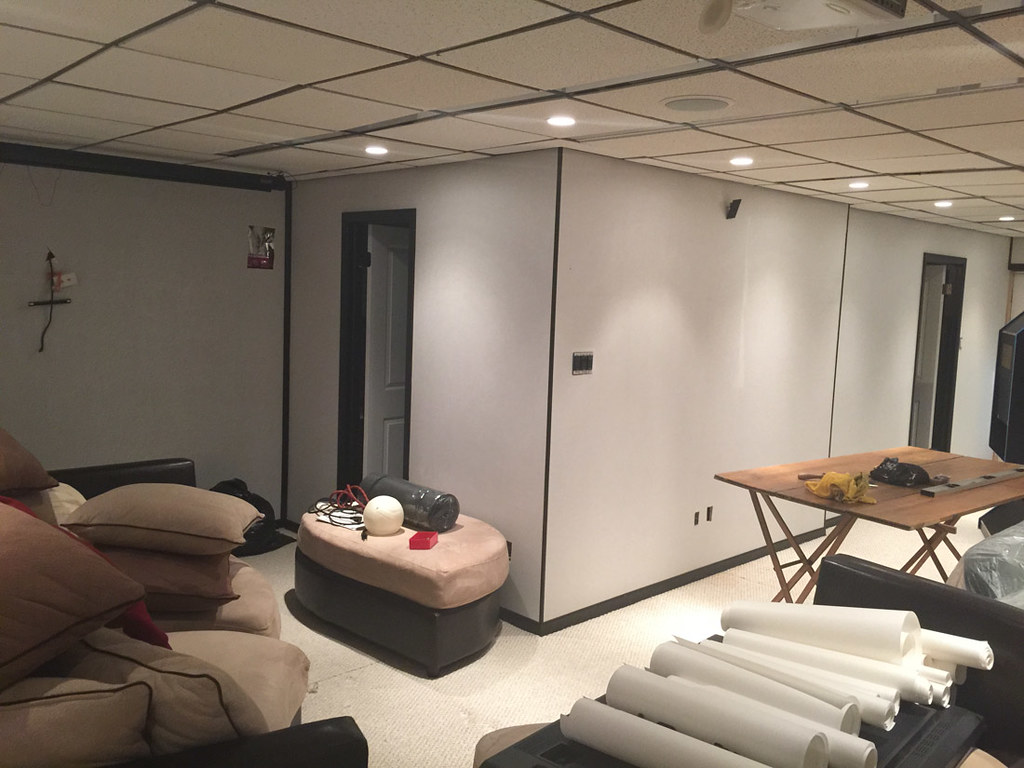 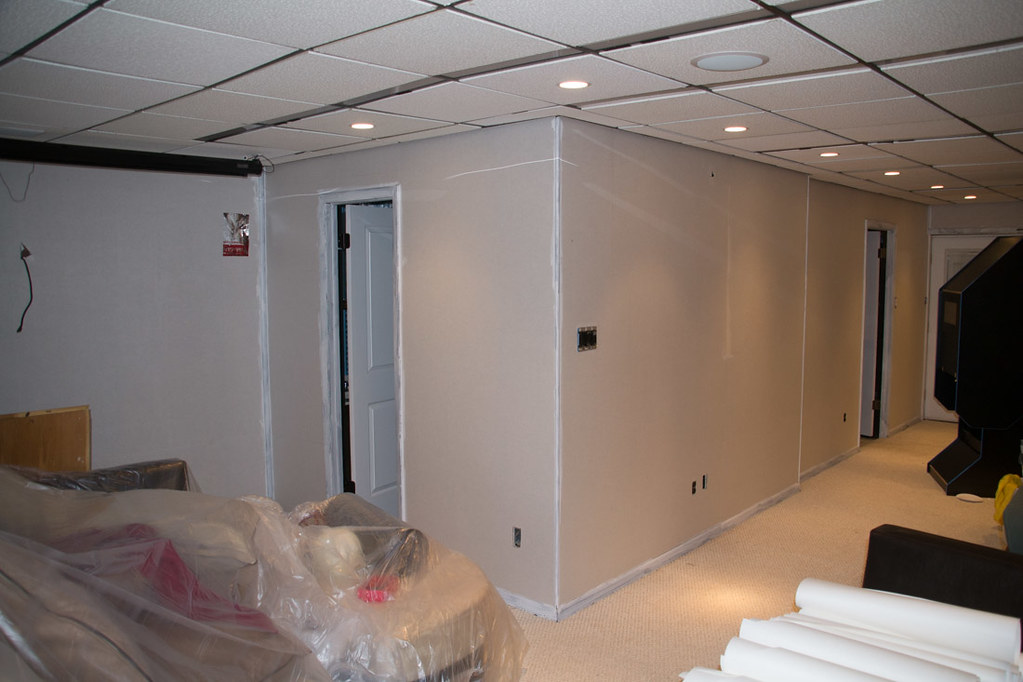 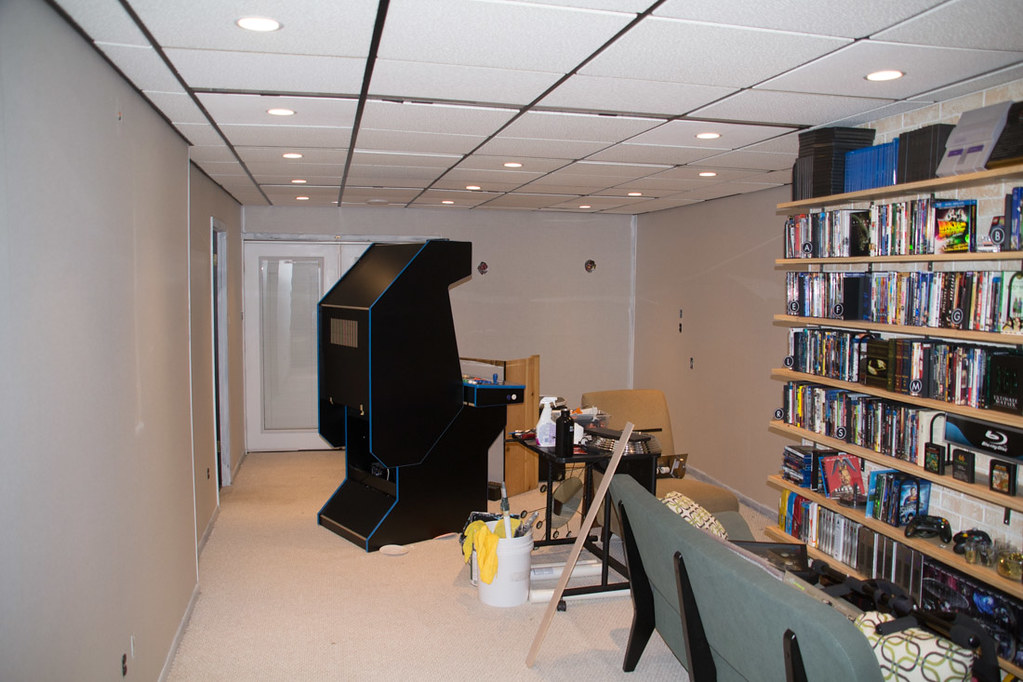 I’m not sure how necessary this step is, but just thought I’d share it in case others are considering the same option. After the wallpaper was up, the installers decided to cover the seams of the wallpaper with a little bit of caulking. I think this was to help in case the wallpaper shrunk a bit as it dried.

The instructions on the wallpaper said to give it 72 hours to dry before applying paint. So, three days later the contractors showed back up to paint the wallpaper! 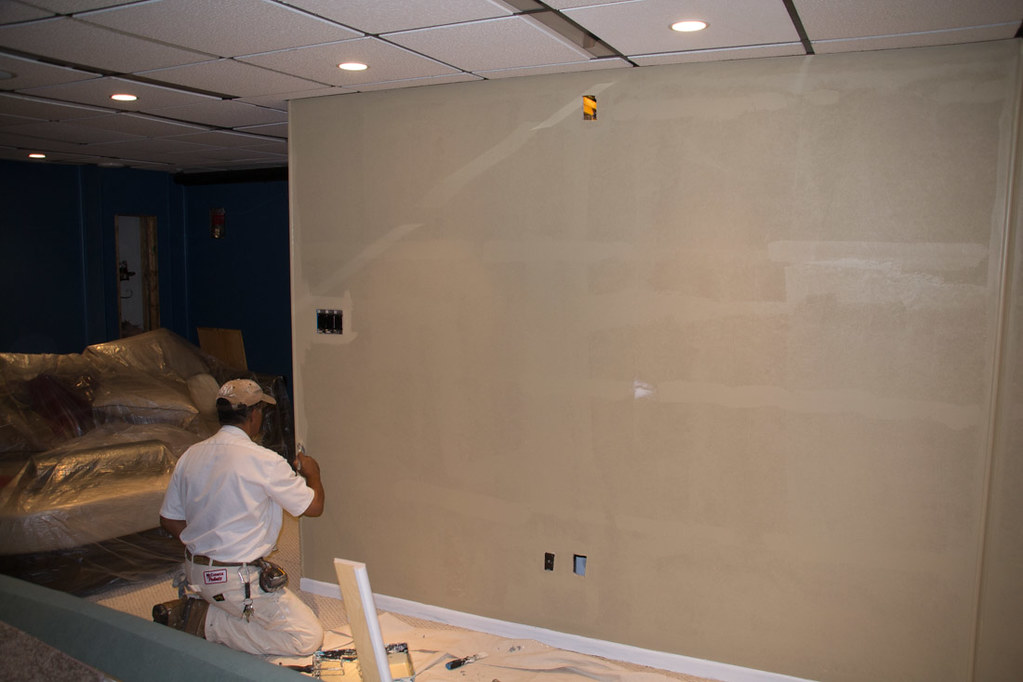 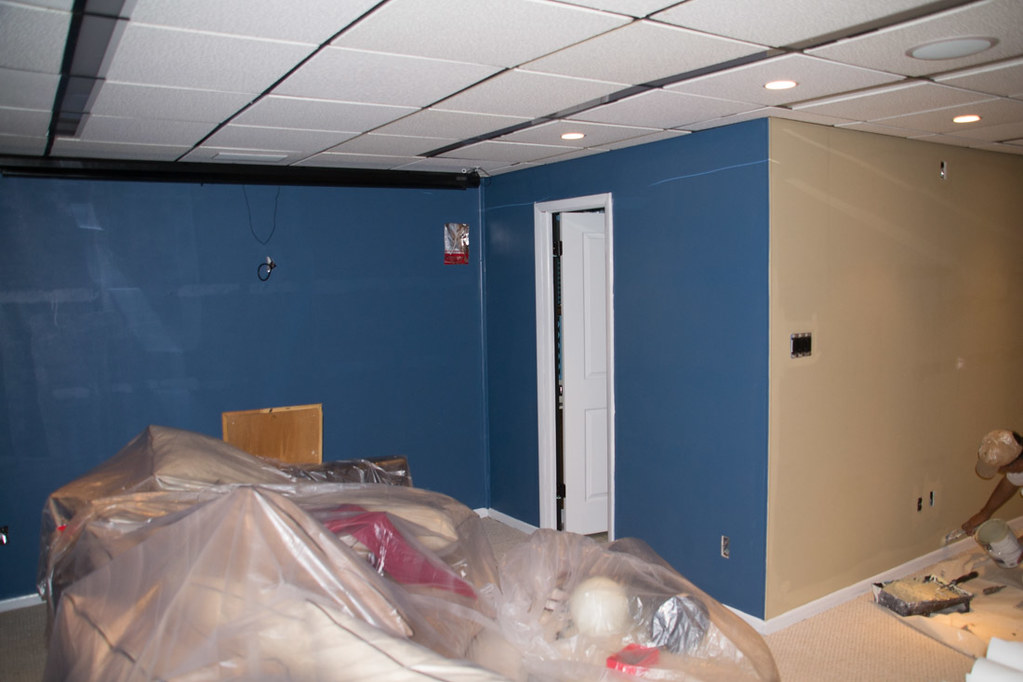 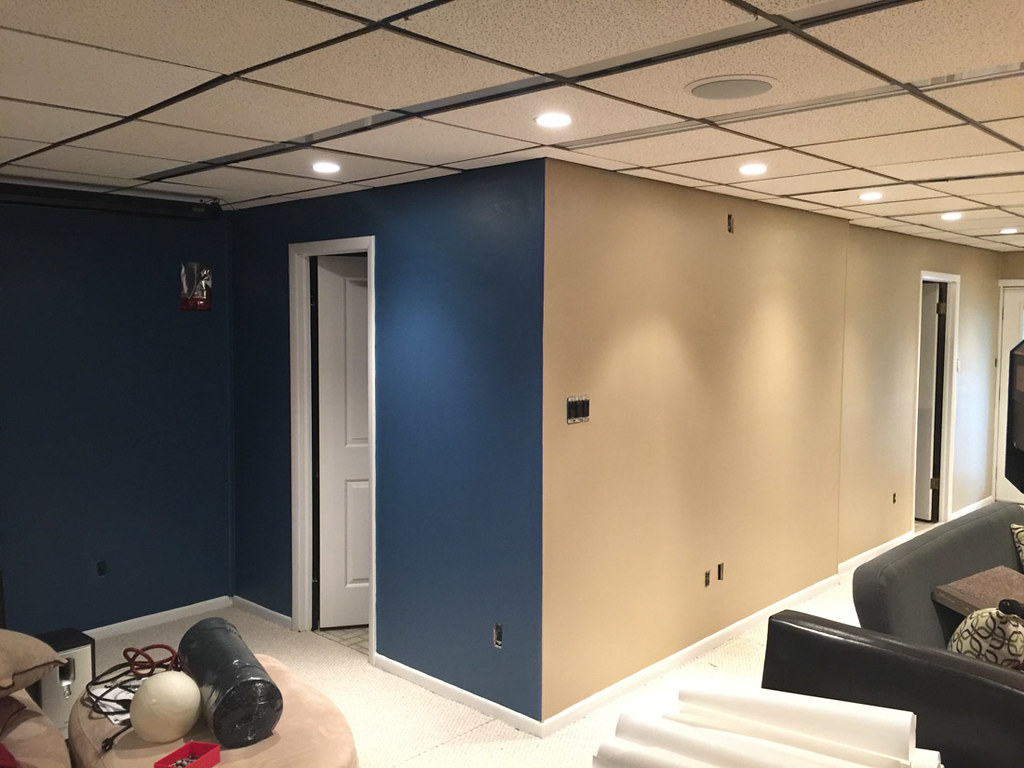 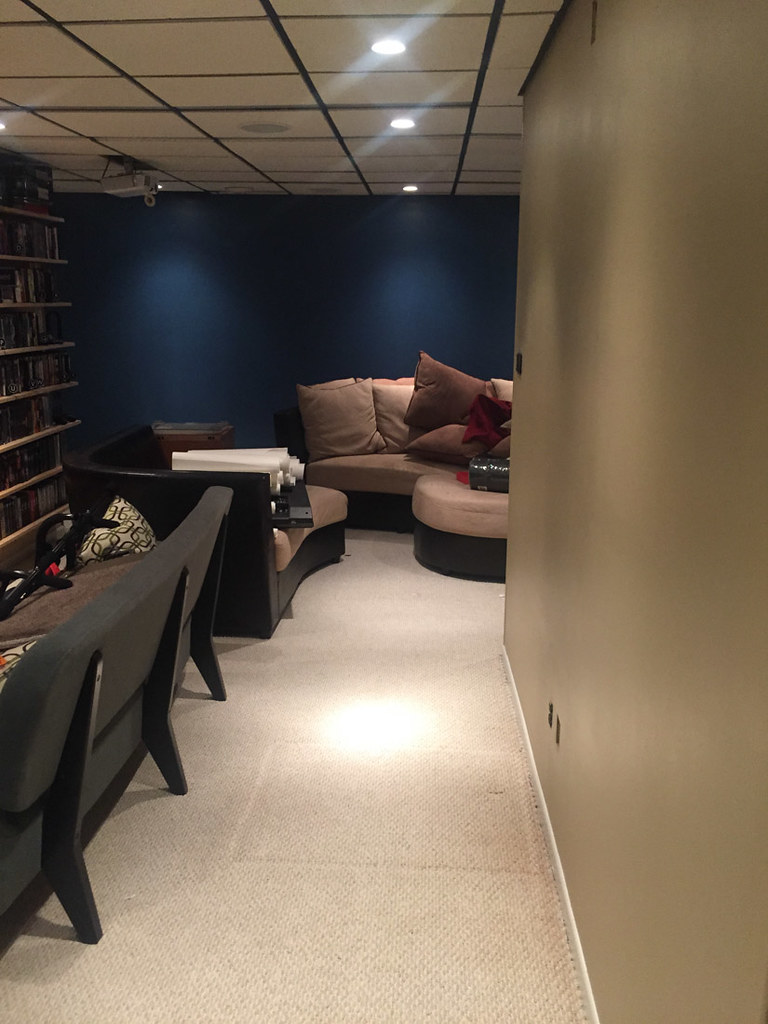 Like I mentioned at the beginning of this post, it’s now been nearly 18 months since having this work done, and it still looks so fantastic. Just for absolute disclosure though, there is one teeny tiny portion of paneling that is visible under the wallpaper. So, I never had looked very closely at our paneling, but apparently paneling is installed in pieces that are several feet wide. Where these pieces “join,” there is a slightly larger groove than the normal part of the paneling. THAT thicker groove, every 5 feet or so, is ever so slightly visible under the wallpaper.

Here’s our attempt to photograph the deeper groove: 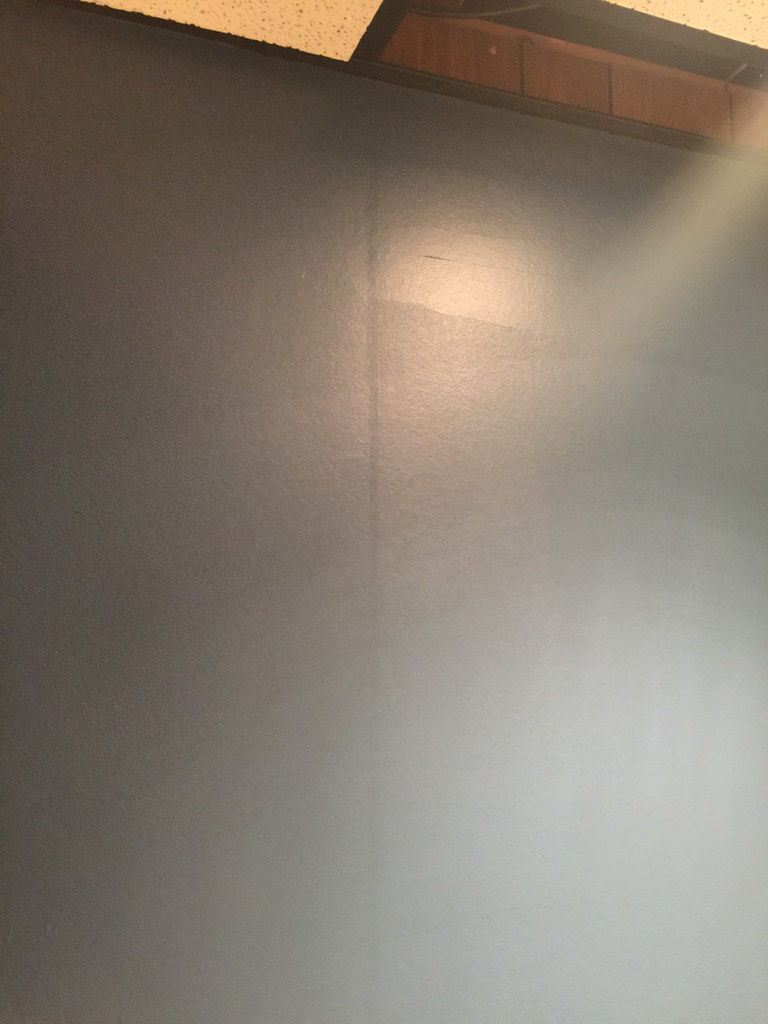 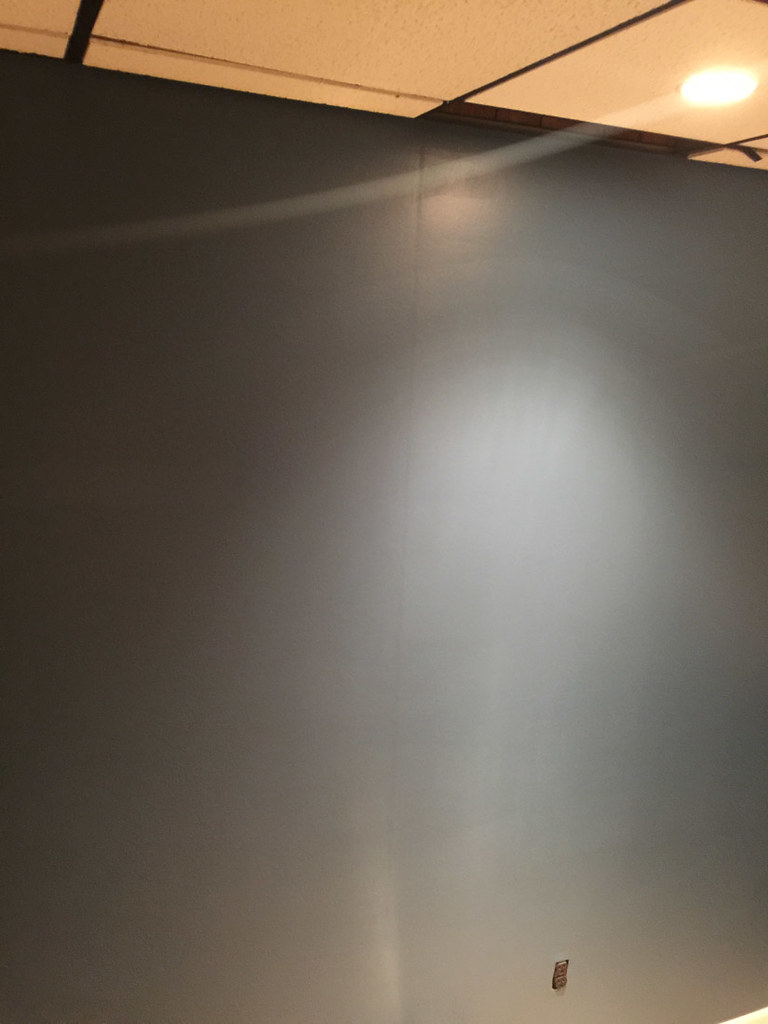 But seriously though, that’s probably only visible to us because we know it’s there. It still doesn’t change our mind that the paintable wallpaper was the easiest and most cost effective option (for the style impact it has) for our basement! And we haven’t had any trouble with the wallpaper settling into any of the regular grooves.

** Here is the sample that the contractor installed on our wood paneled bar before we removed it. We also then used that spot to identify paint samples we’d eventually want to use on the walls. 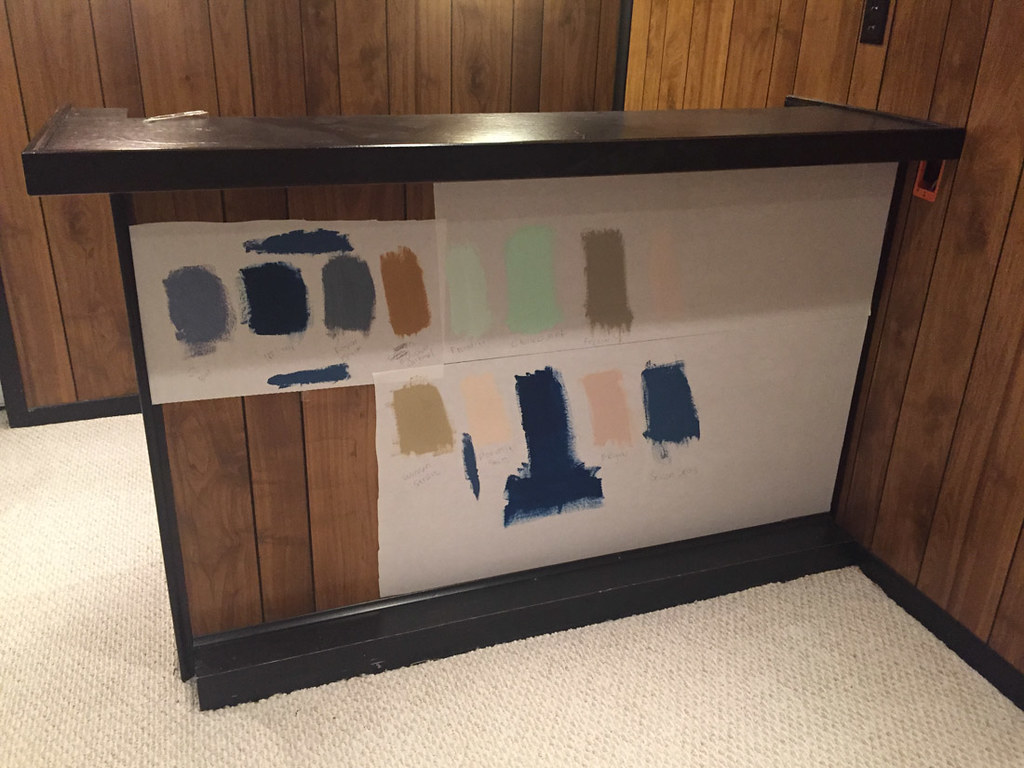 If anyone is in the DC / Northern Virginia area and would like to pursue this option, message me and I can send along the contractor’s info.  They were great.

Again, here is a link to the paintable wallpaper we used.

**Update.  Because I’ve had a few folks ask about the paint colors, we used Behr Woven Straw and Behr Seven Seas, both in eggshell finish.  I find it super easy to order paint samples from Home Depot online in case you want to experiment with different colors.

Do you have a 1970s era wood paneled room in your house? Did you do anything to cover or replace the paneling? What option did you use?

Hello, this post was great. We are thinking about doing the same thing to our basement that has painted wall paneling. I was wondering how you hid the seams between the next roll that was applied to an adjacent roll? I know you said they caulked in some areas but did that produce a smooth transition? Also at the outside corners how did you make it so it was smooth and that you didn’t see the wallpaper ending/beginning? Thanks!

Hi, yes, the seams are virtually invisible! We had professionals install it, so I think they’re great at being able to hide those seams. Not sure if we would’ve been able to do the same ourselves!

I was wondering what you may have done to prep the paneling before you papered over it ?

zero prep. They just wallpapered over it. It’s been 5+ years since doing this project and it’s still holding up great!

I notice they hung the paper horizontally instead of vertically. Do you think this was absolutely necessary?

What a big difference! Love the colors you chose

can you give me a ball park estimate of how much you paid for this?

Hi, Melissa. What a great solution. I stumbled upon your post looking for ideas on how to update a wood-paneled room. My husband and I are in the northern Virginia area too and would love to have your contractor’s information if you wouldn’t mind sharing it!

Sure! I sent you an email with his contact info.

Wow, I can’t believe I found this post. Thank you so much for sharing. I have just collected 3 estimates for tearing out the existing paneling to “update” our basement. The last contractor told me I should reconsider said this is really nice basement, you should consider painting it & saving your money (right). So that got me looking on the internet, AGAIN, for options and I found yours through googling wallpapering over paneling (which I had learned through pinterest). I am really really thankful & would really hope you can share the contractors name & number with me. I live in Md, right over the Wash DC line, hopefully, they will be interested.

Wow. I’ve got a 1000 ft basement installed drywall paint and trim less than a thousand, did it myself but it saves on labour cost.

Yep, no way we would’ve been able to do it ourselves and have it look even halfway decent, lol.

I have crappy cheap wood paneling. Do you think this would work on it?

Ours was crappy cheap wood paneling too, although it was in good condition. So yep, I think it would work.

Hi we’d love your contractors name as well! Does he only do painting and wallpaper? Have you used his for other jobs?

The link to the wallpaper you used is for wallpaper lining. This is a heavy paper that typically is installed on walls that have problems prior to installing wallpaper. Did you use lining paper only?

Yep, that’s all we used. We’re now 4+ years since putting it up, and it’s still holding up perfectly!

Will this paper cover woodchip paper.

I don’t know, sorry! I’m not sure what woodchip paper is.

I’m buying a small farm house. It has bead board, although I love beadboard the space is too small for that many lines so looking at covering it up. This seems much easier and cost effective than replacing with drywall. Thanks! I pinned this to my pinterest account. It looks great!

Thank you SO much for posting this article – you were very thorough and honest with the pics! It was EXACTLY what I wanted to know!!!!

Glad it was helpful!

This is so great! Planning to do this project during this isolation period. Do you happen to know what they used for the caulking??? Thanks!!!

Hmmm, I do not unfortunately! It was the same stuff they were using to caulk in between the mouldings and quarter rounds.

Thanks Melissa! Just tried it myself with a friend and it’s not going as well as it looks like it did with your contractors. Do you know if they were using a tool to smooth it or if excess glue was coming out? I know you didn’t do the project yourself so you may not remember or be aware. We are having trouble with the paper dried and still being able to see the ridges pretty well.

Thanks so much for these pics!

I redid my own paneled basement a few years ago, but I sanded the paneling to scuff it, applied mud in the grooves, then did a skim coat of thin mud over the entire paneling. Sand, repeat, sand, repeat. It took about a month for it to look good enough to paint.

So far it’s OK, but I DO have a few places where the mud cracked along the paneling seams. NOW I wish I’d used caulk, like your installers did! Latex caulk would have flexed with the paneling instead of cracking.

Now I’m kinda thinking about redoing it your way… :-O

Did they paint straight onto the Brewster liner or add another paintable roll of wallpaper over the liner? I’m about to order some to cover some paneling myself, but am reading conflicting information on different websites (e.g. Home Depot) as to whether it is actually paintable or not.
Thanks!

They painted straight onto the liner.

This was done in My parents home many years ago, probably 20. It has developed bubbles in areas but over all it was a wonderful idea. Of course now the problem is-how to get the wallpaper off so we can make the wall smooth again. It’s on all four walls in small areas, the largest being about a 12×12 inches. In the latter years my father likes the house really hot so I’m thinking moisture may have gotten in somehow. Anyway, if you have any suggestions, please please please pass them on. The painter is at a lose.

Why would you not caulk the lines regardless what they are from. I am going to try the wallpaper as well but I am planning on having to compound seams or crevices were paneling shows I am just concerned with the cost. You stated it cost $2300 and have to ask if most of that was labor? Just a note that any job always look better if you take the time to compound any defects and sand then in so nothing is visible to the eye after paining

You literally cannot see any seams or grooves except for the “big” ones every several feet, and even those are difficult to see. It’s been 5+ years since undertaking this project and it still looks great. I would imagine that caulking every seam would’ve added considerable cost and time to our project, and it definitely wasn’t necessary. The wallpaper is very thick.

I have been researching how to update our basement paneling and never even thought of paintable wallpaper. Yours turned out nicely. So happy I stumbled across you post. Just thinking about having to use an oil based primer had me feeling nauseous. Great colors by the way!

Thank you for this blog! It is very helpful. Do you happen to know if the contractor used additional glue to help the wallpaper to stick or just what came on the paper? Thanks again!

This is GENIUS! So glad I stumbled upon this!! I read the article twice and don’t see the answer, but forgive me if you stated it — what did you do on the corners/edges where the two panels meet.. is the trim still there or did you remove?

Hi, sorry for the delay responding! Trim pieces are still there, we just painted over them to make them blend in more with the wallpaper color.

Hi Melissa!
I think these comments will go on forever lol. I’m assuming from your post & comments this is not good idea for renters?

Hi Melissa, I stumbled across this list. The walls look beautiful. Would you please send me the contractor’s information? I’m having trouble finding anyone who will do this. Please and thank you! I live in the DMV.