After we rebooked our train to an earlier time, we still arrived at Penn Station with enough time to grab a snack before our train departed.

As I mentioned in the introductory post, I transferred 24,000 Chase Ultimate Rewards to my Amtrak account to redeem two first class tickets on the Acela train from New York to DC. While this probably isn’t the greatest value of Chase Ultimate Rewards points, I should point out that when I was researching tickets for that day, Amtrak tickets were exceptionally expensive at around $200 each. Much higher than the $49 tickets we got going up to New York! I’ve always wanted to try the Acela, but I’ve never been willing to pay the price premium, so I figured what the heck, and booked Acela First Class. 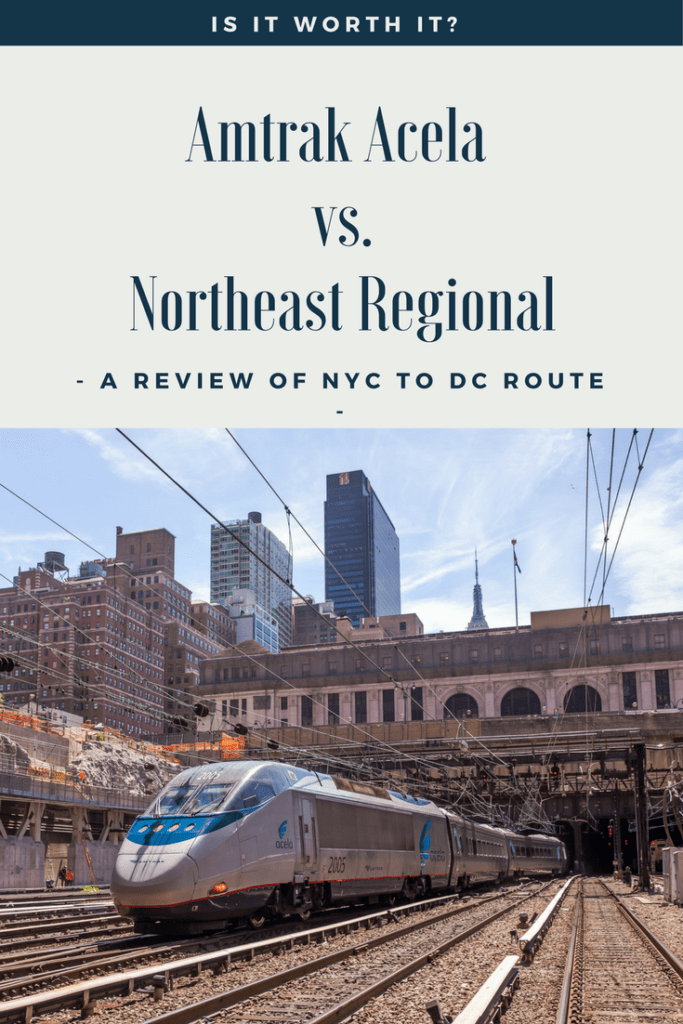 We were able to use the Acela first class lounge, called Club Acela, at Penn Station. It was small and dark, but it was a good place for some quiet, considering the near constant announcements going on in Penn Station. 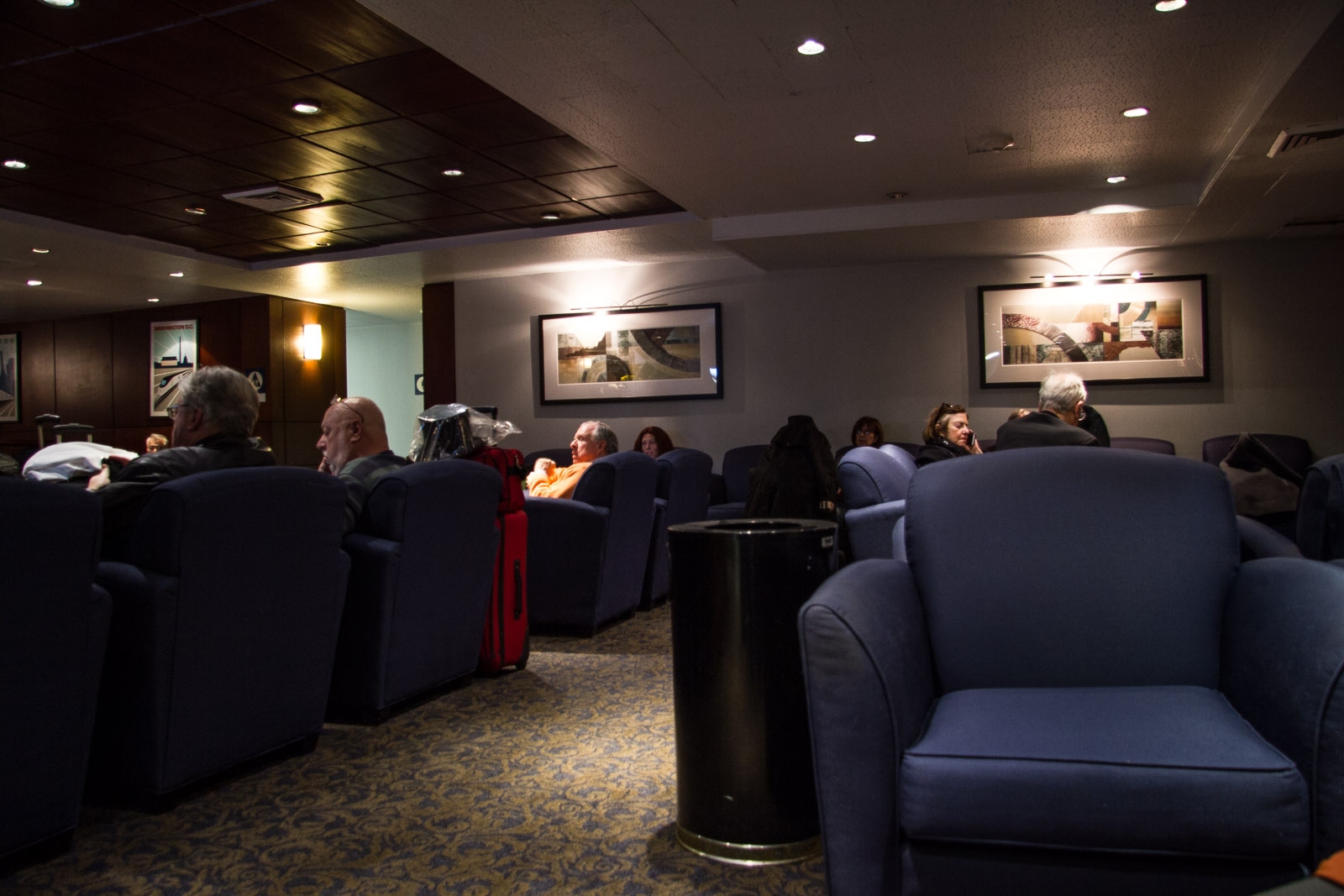 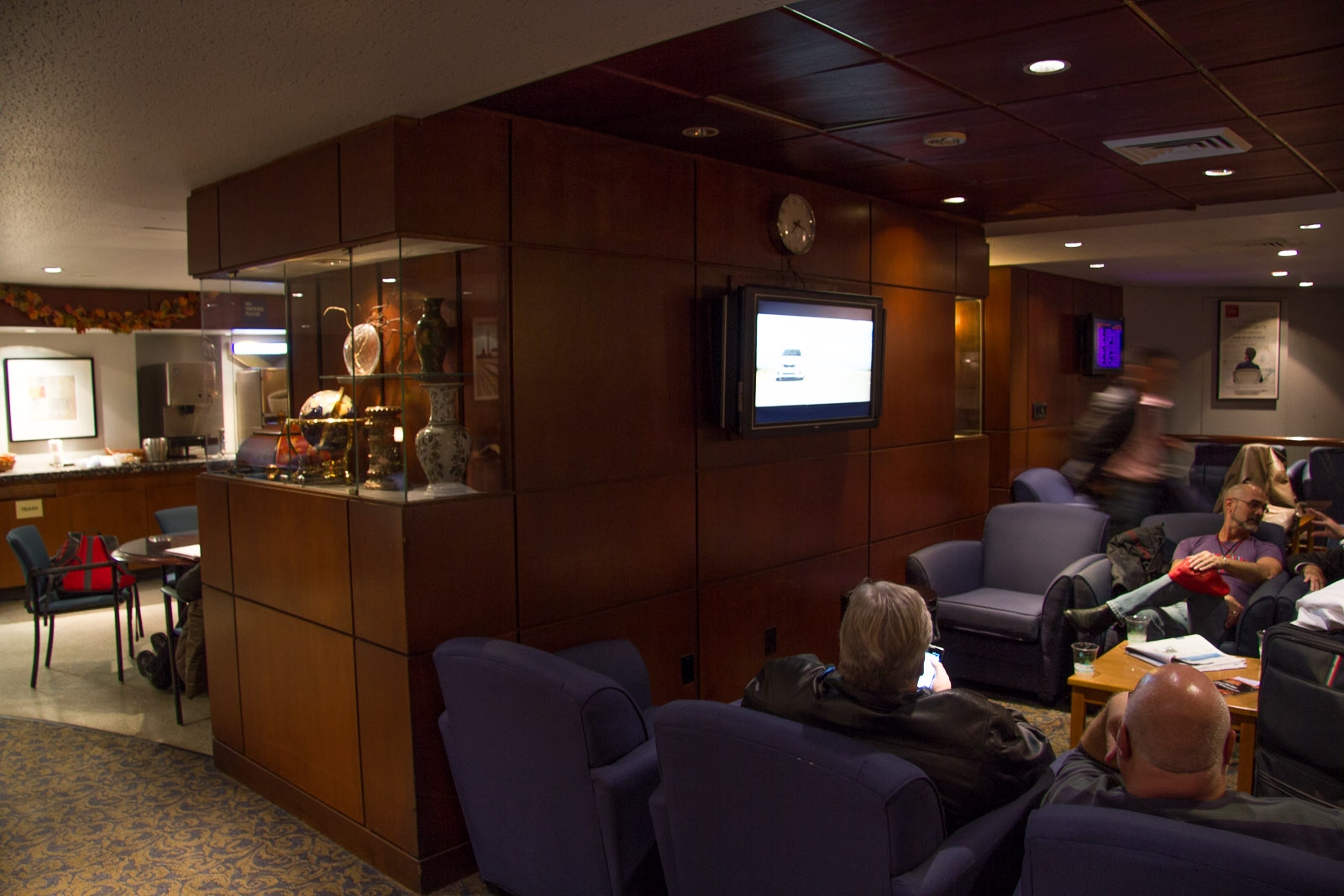 There was a small bar area with sodas and coffee, near the check-in desk. 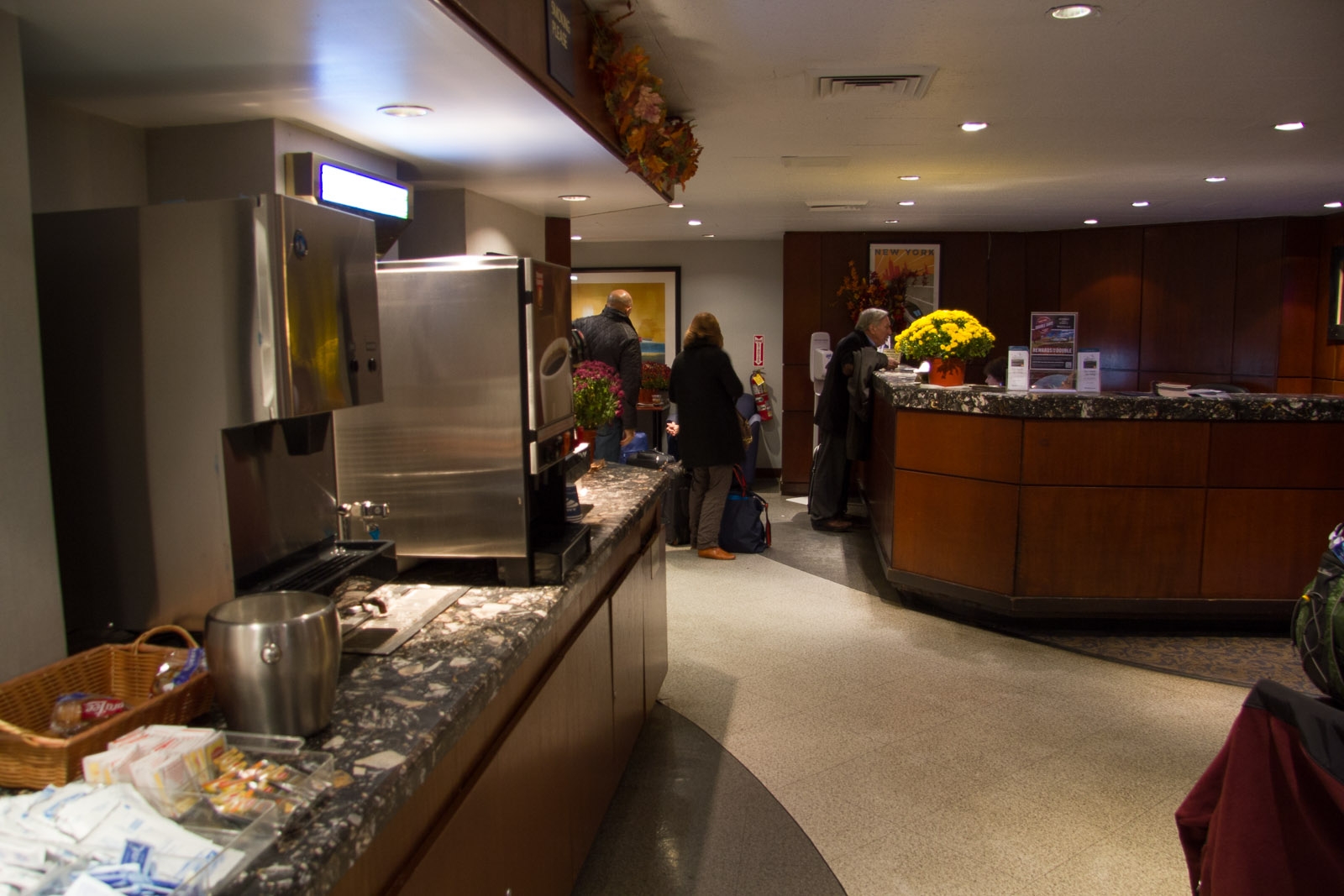 And a small business and work area. 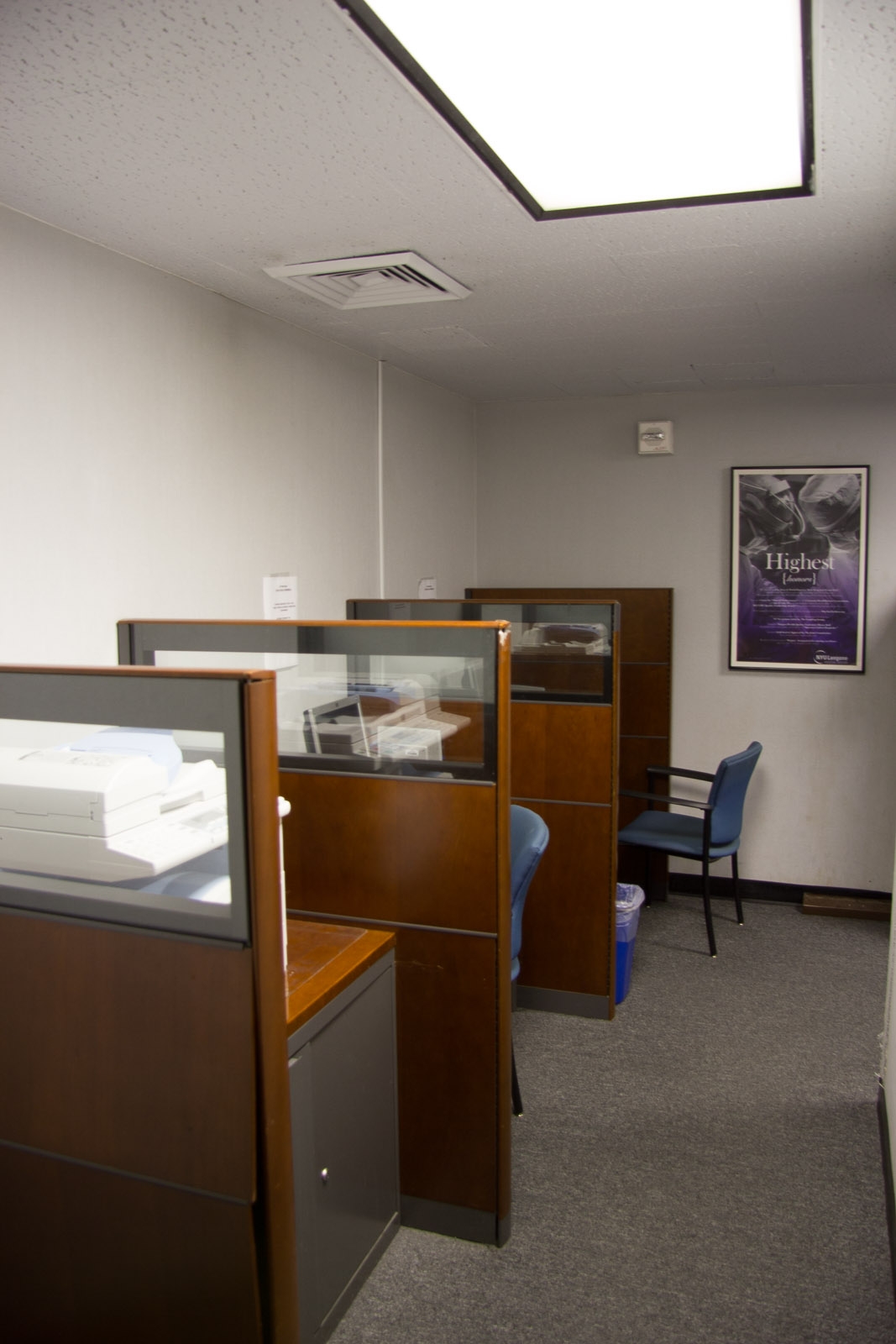 Not long before our scheduled departure, staff in the lounge announced boarding for our 4:00PM Acela train to Washington, DC’s Union Station, departing from Track 13. 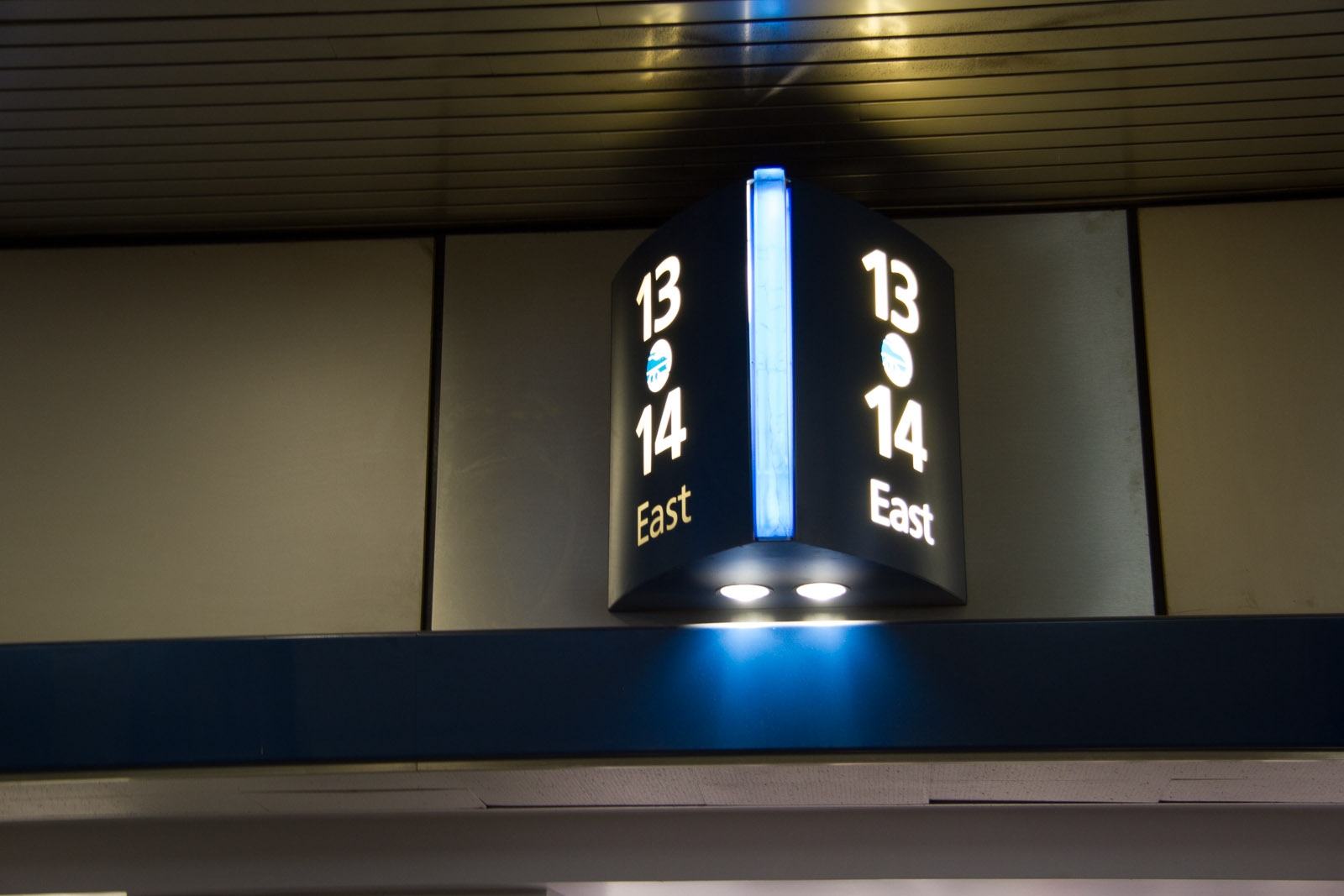 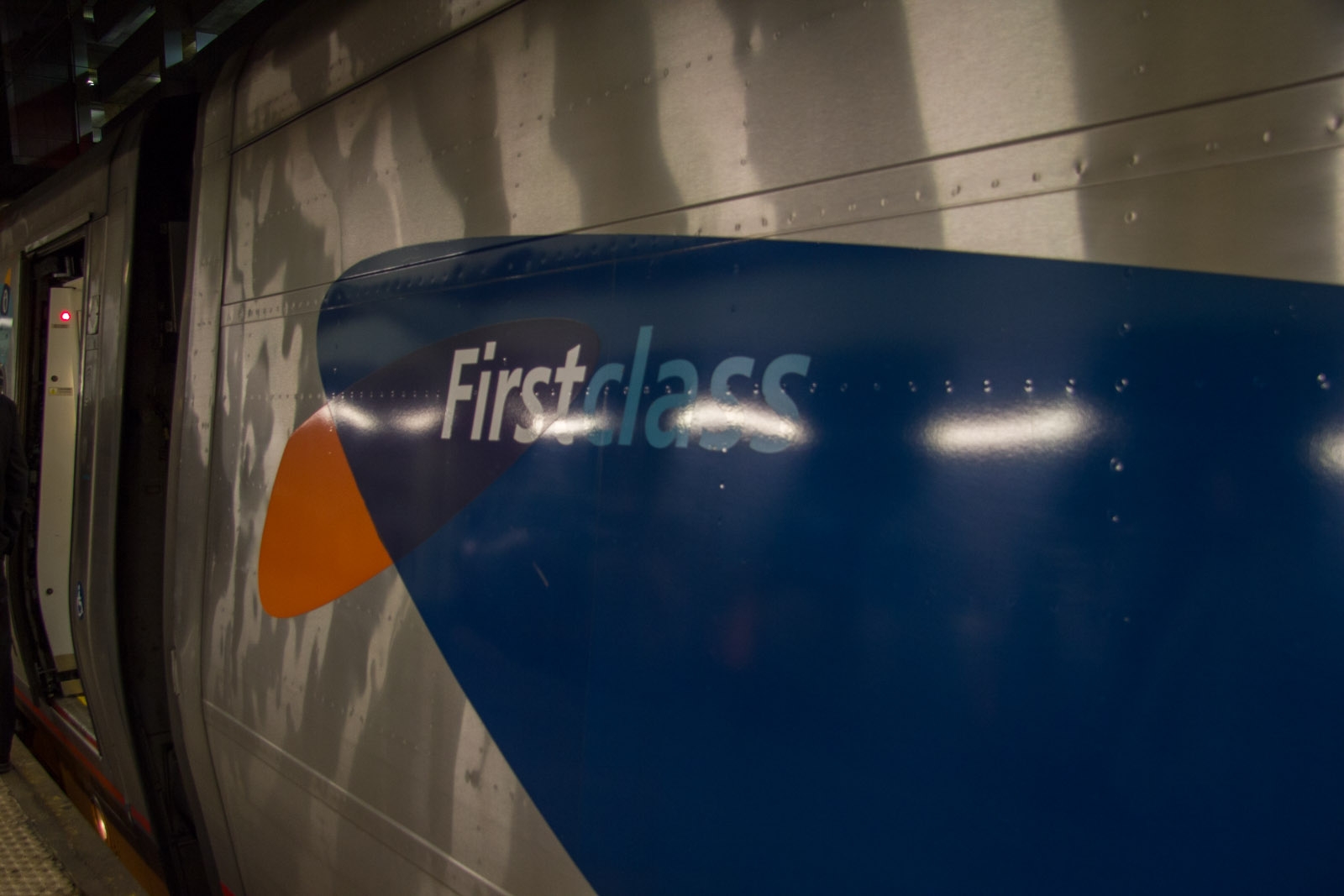 Seats were arranged in a 2 x 1 layout, so if you’re traveling alone, you won’t end up sitting right next to a stranger. 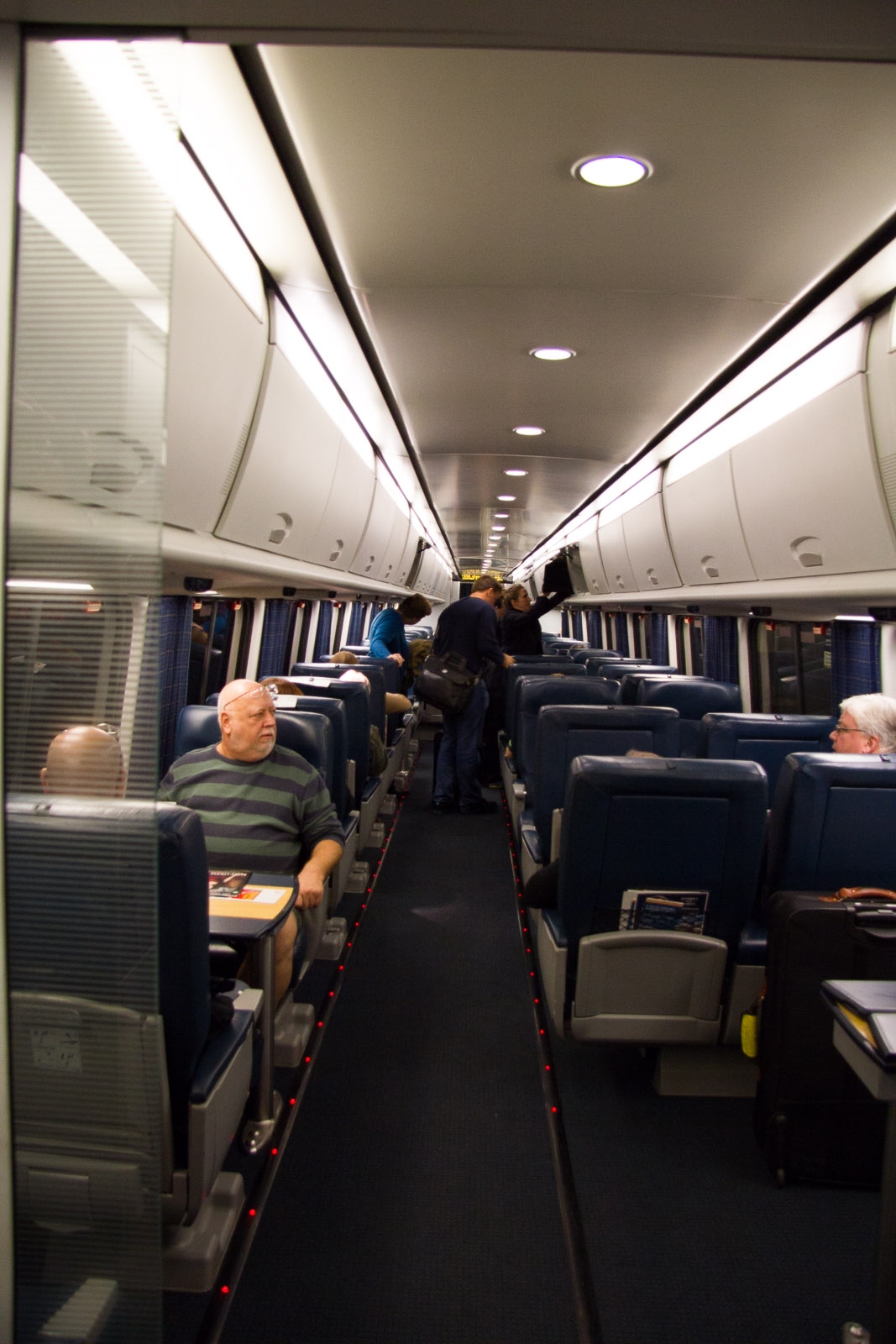 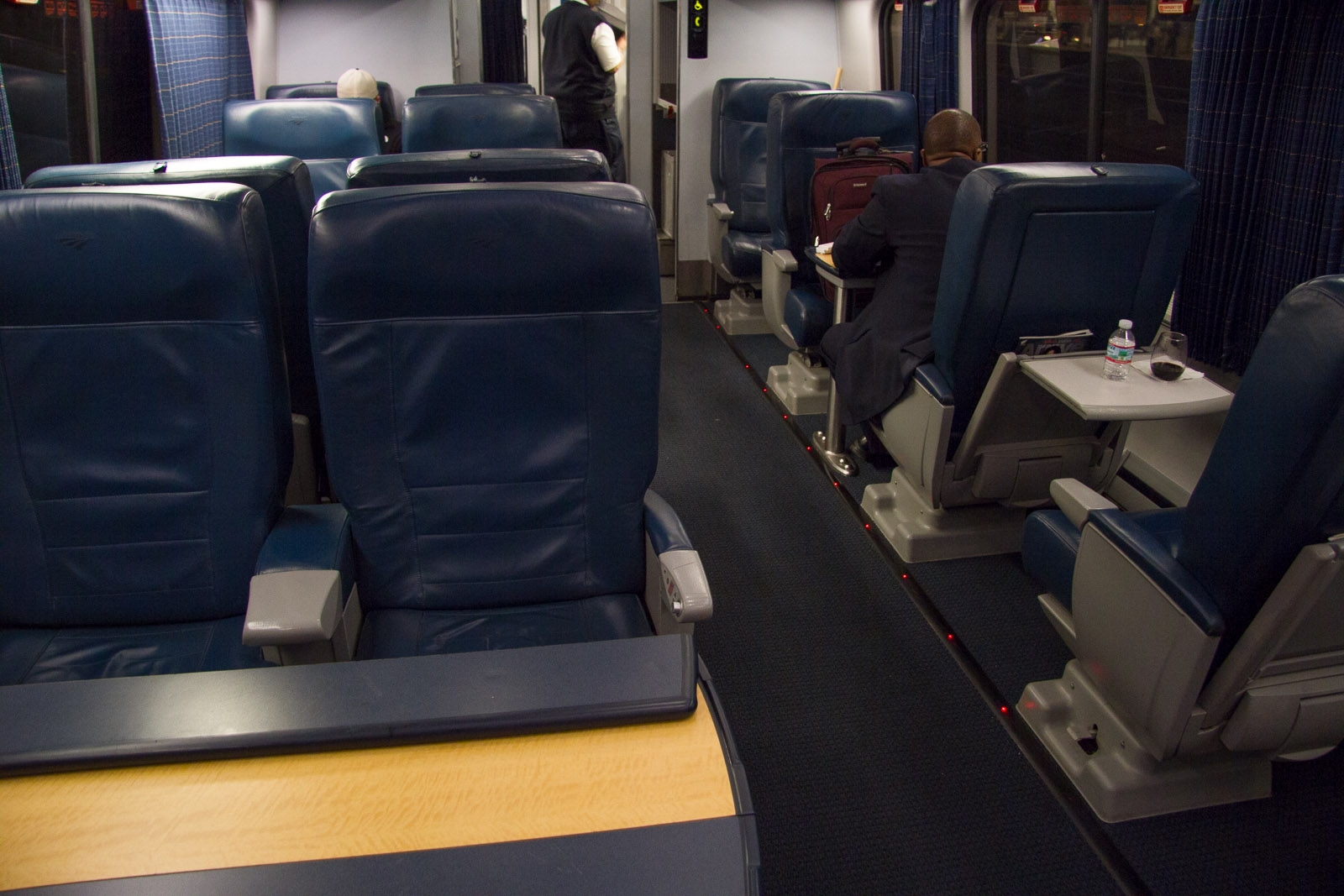 There were also a few groupings of seats that faced each other, separated by a table, which would be great for groups or families traveling together.

Obligatory legroom shots of the seats. 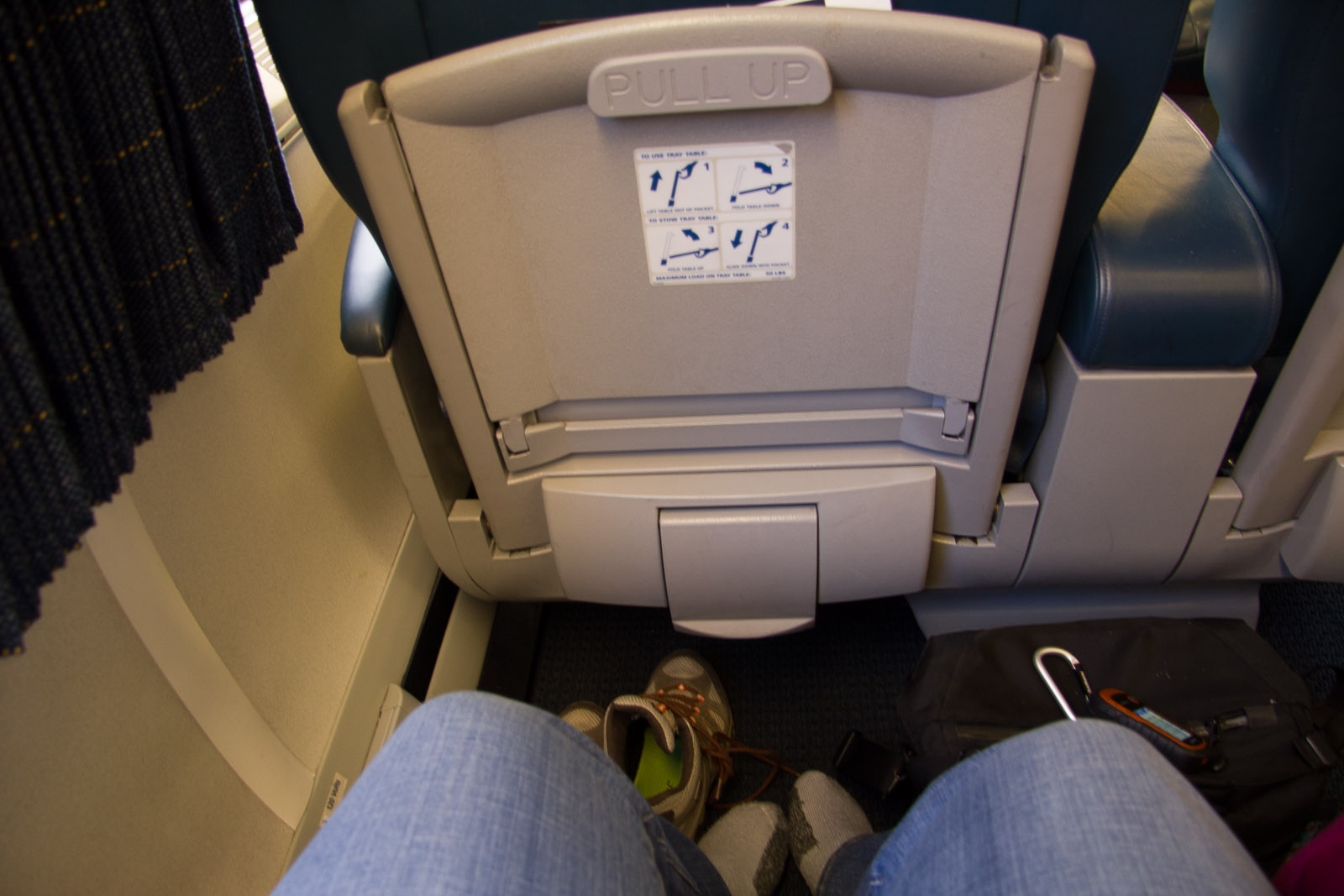 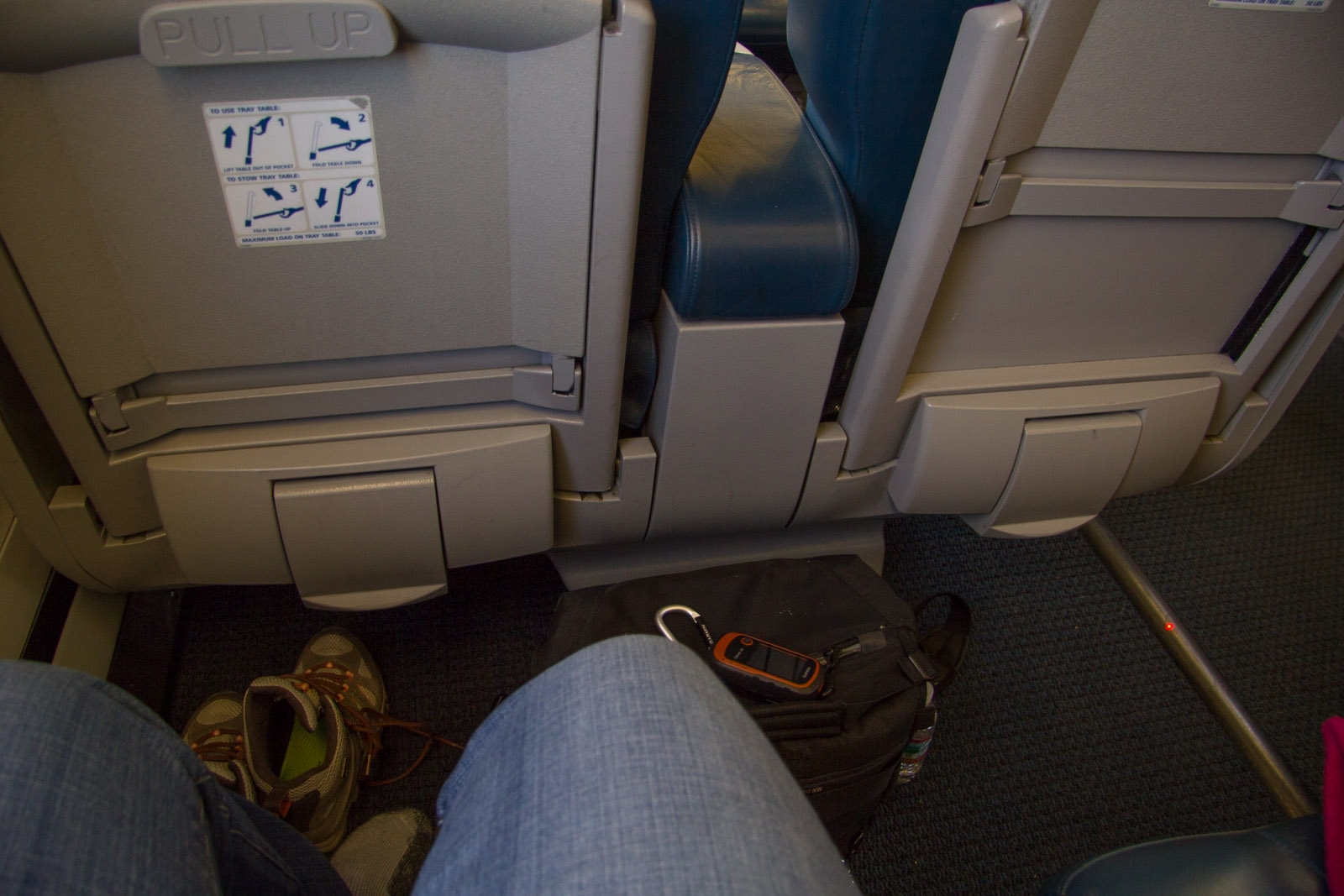 I was really hoping that the first class seats would have a little recliner foot rest, but instead all it had was a foot rest attached to the seat in front of me. 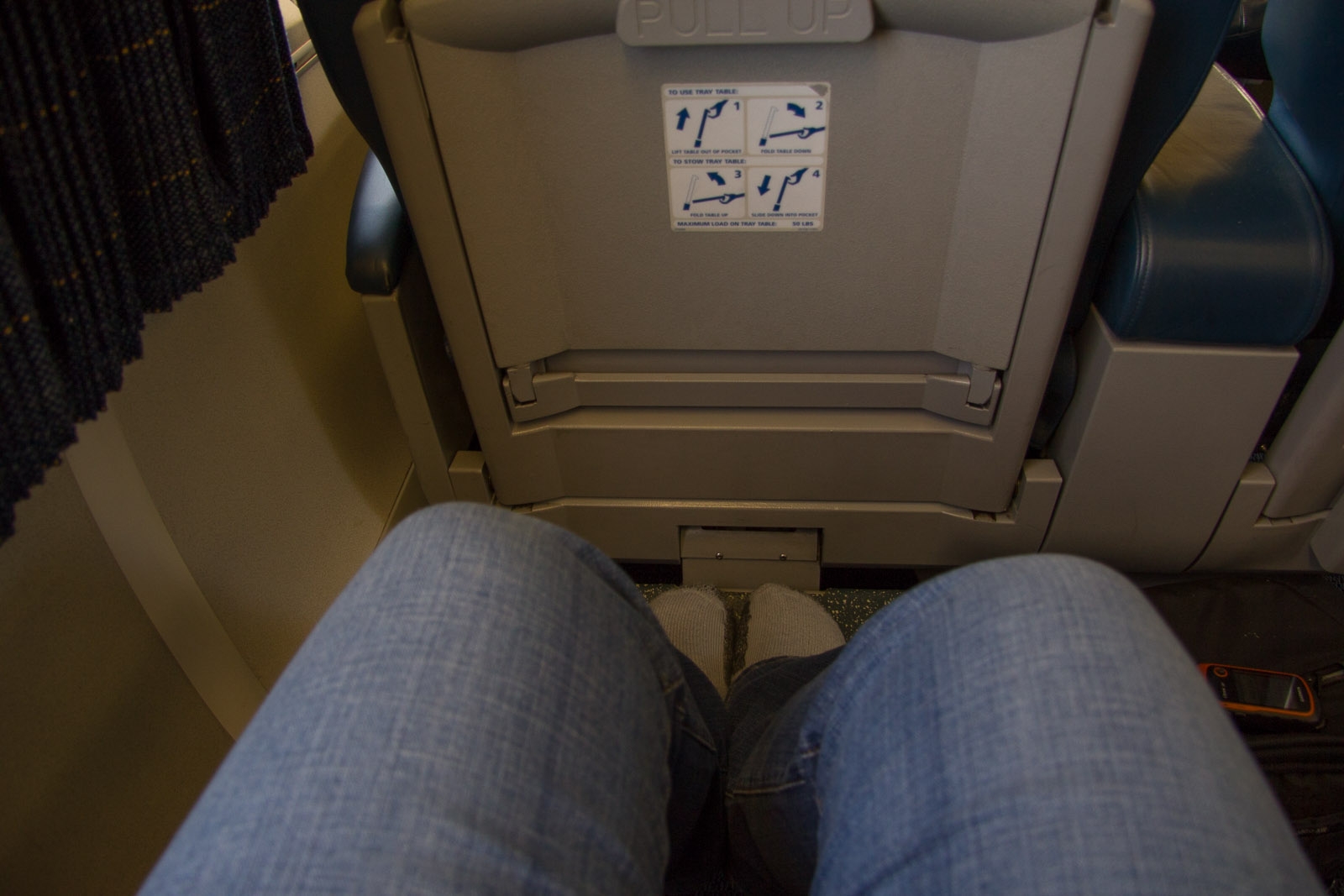 One of the benefits of First Class Acela versus the rest of the classes is that you get free food and beverages, including a nice selection of alcoholic beverages.

Here was the menu on our train. 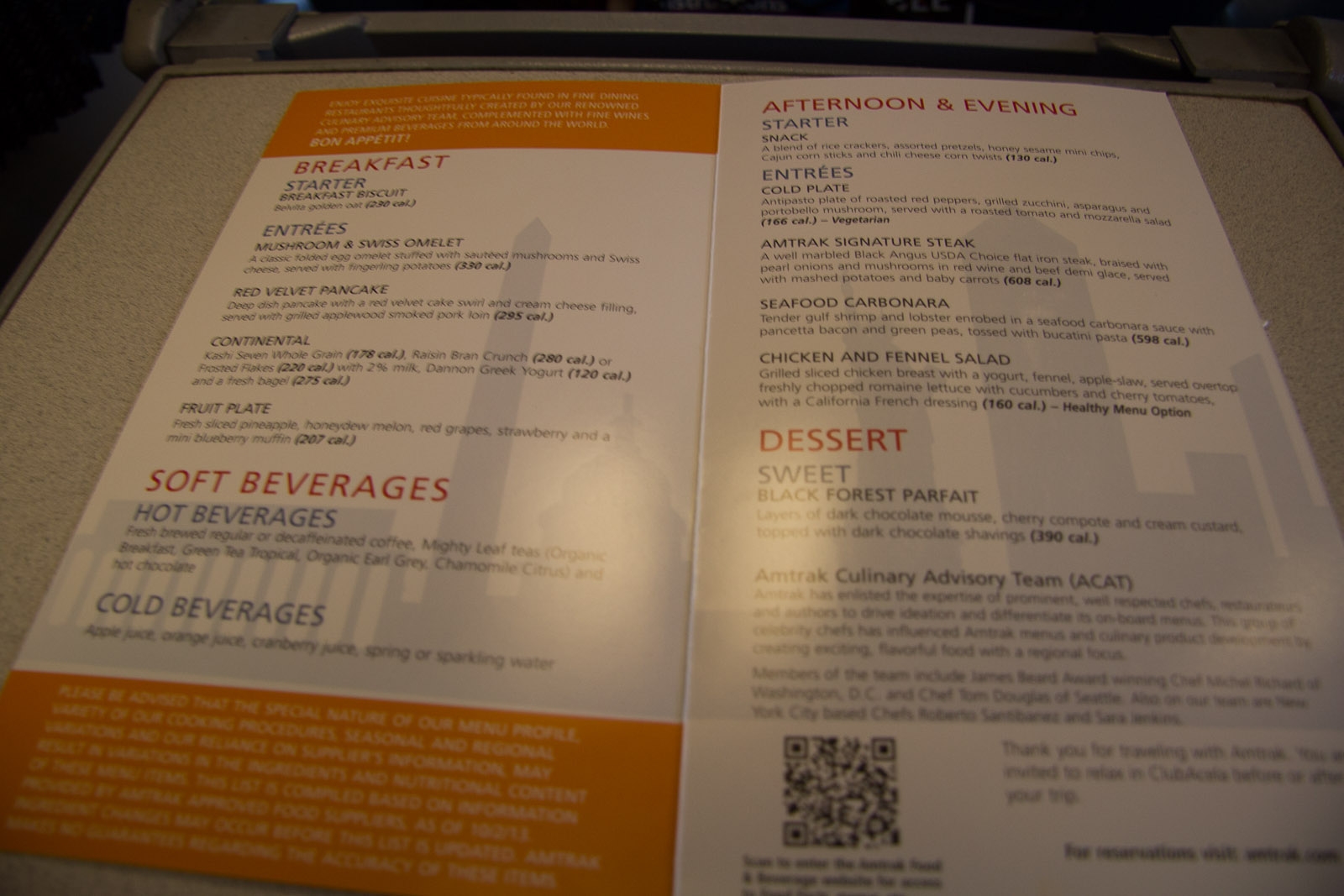 I started out with a soda and some crunchy snacks.

I ordered the Amtrak Signature Steak, and so did Ken.

When my food came out, it looked like the sauce had spilled all down the side of the plate and then been microwaved. 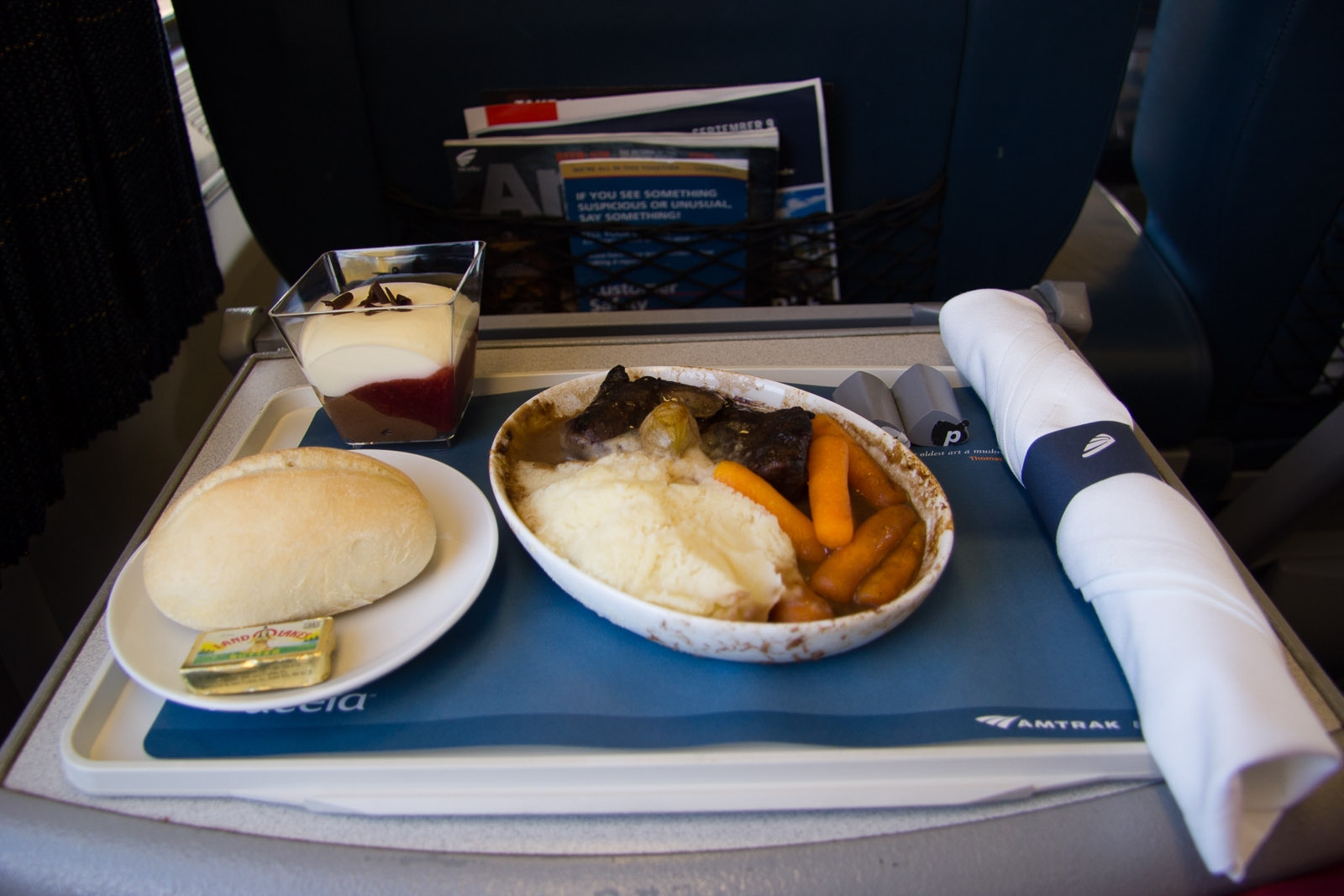 Ken’s dish was a little neater.

But we both agreed that the steak was really, really terrible. In fact, I’m not sure how they could call it a steak. It had the consistency of a pot roast, and it was exceptionally bland.

Although I did enjoy a few Dogfish Head IPAs 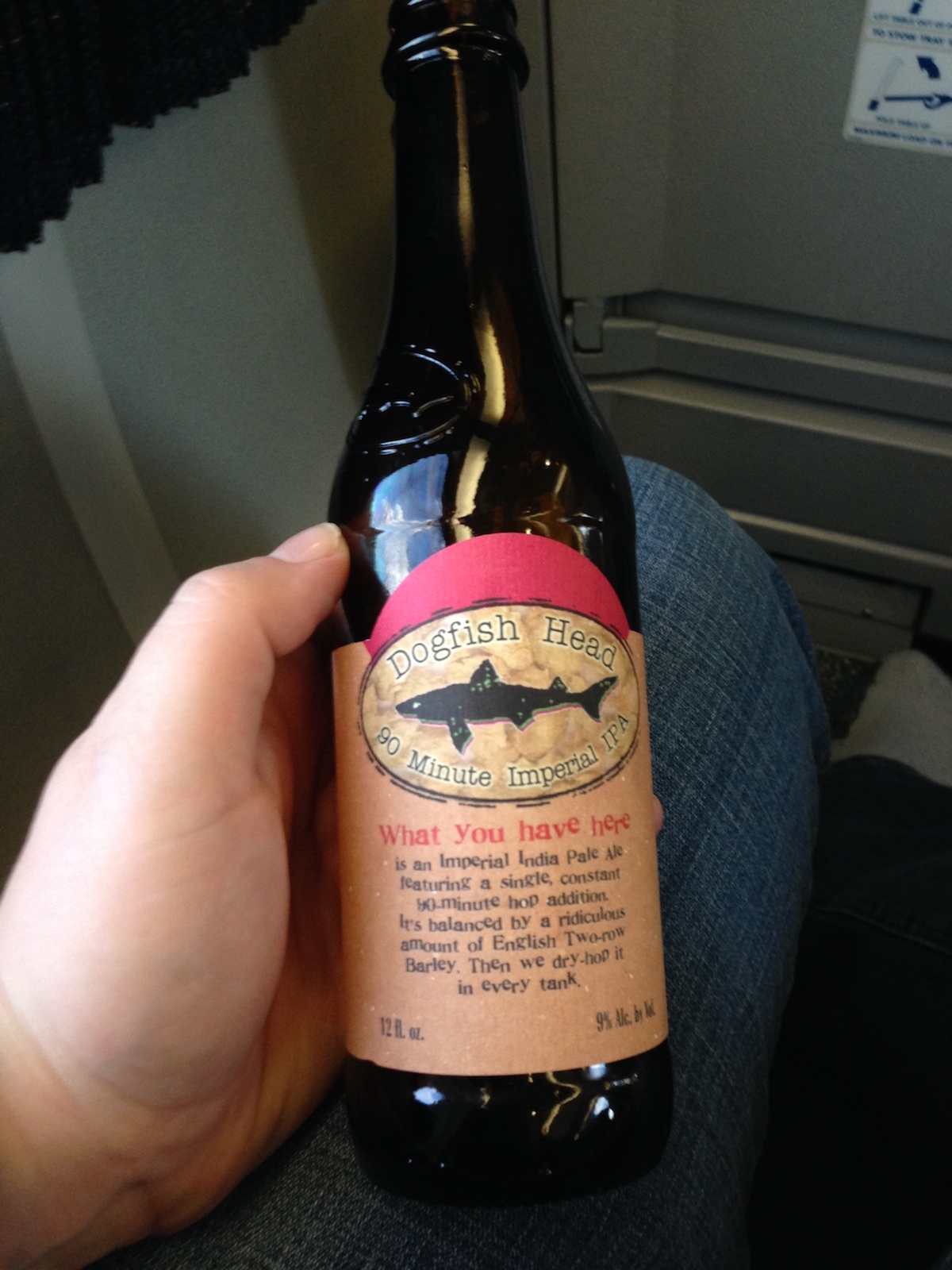 As for the speed of the Acela, we were monitoring that the whole time with Ken’s handheld GPS. On our trip up to NYC (on the normal Amtrak regional train), the max speed the train hit is about 100MPH, and it didn’t stay at that speed very long. The Acela had longer sustained speeds, and went up to about 120 MPH. It was difficult to tell a true time savings because our train up to New York was delayed along the way due to mechanical problems, but the Acela train itself was scheduled for about 30 minutes shorter than our Amtrak regional. I did like that it made fewer stops than the Regional, as it made for a smoother ride.

I don’t think I’d take the Acela, and especially Acela First Class, again in the future unless there’s some amazing sale. I just don’t think that the price premium was worth it considering that it A) wasn’t that much more spacious; B) Didn’t have good food, and C) the time savings was not all that significant.

Has anyone else taken the Acela, or specifically the Acela First Class? What were your thoughts?

Using Google Docs to Save and Organize Owner’s Manuals