The next stop on our Alaska cruise was Skagway. We booked the White Pass and Yukon Route railroad excursion. It was for a two hour, 3000 foot ascension to the White Pass Summit. However, that excursion wasn’t departing until the afternoon. So first, in the morning and early afternoon, we took a port-operated shuttle to the town of Skagway. 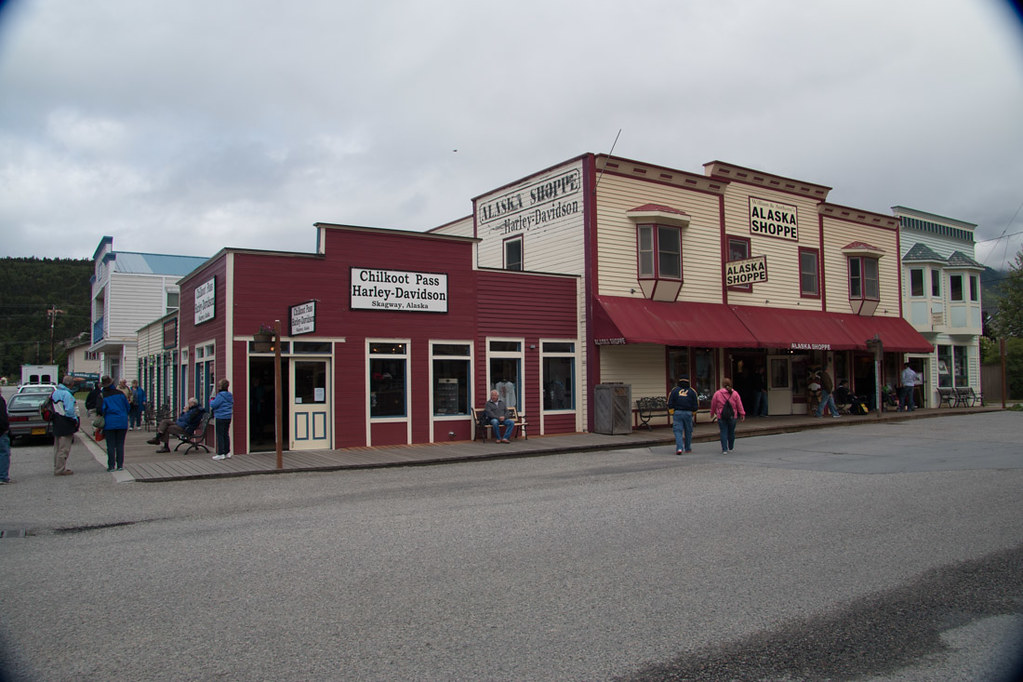 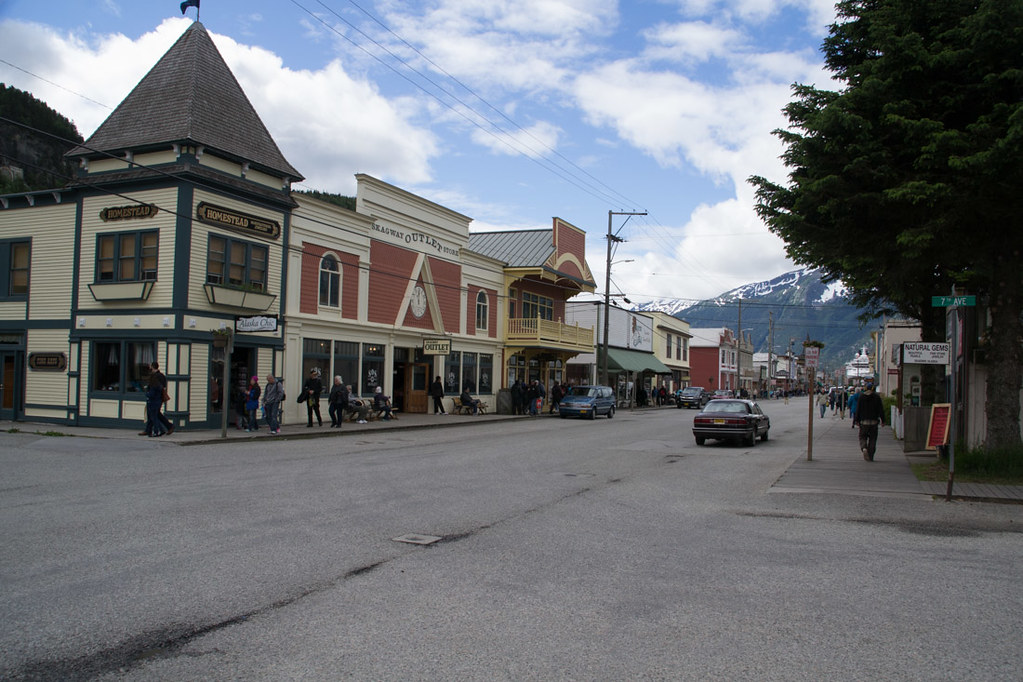 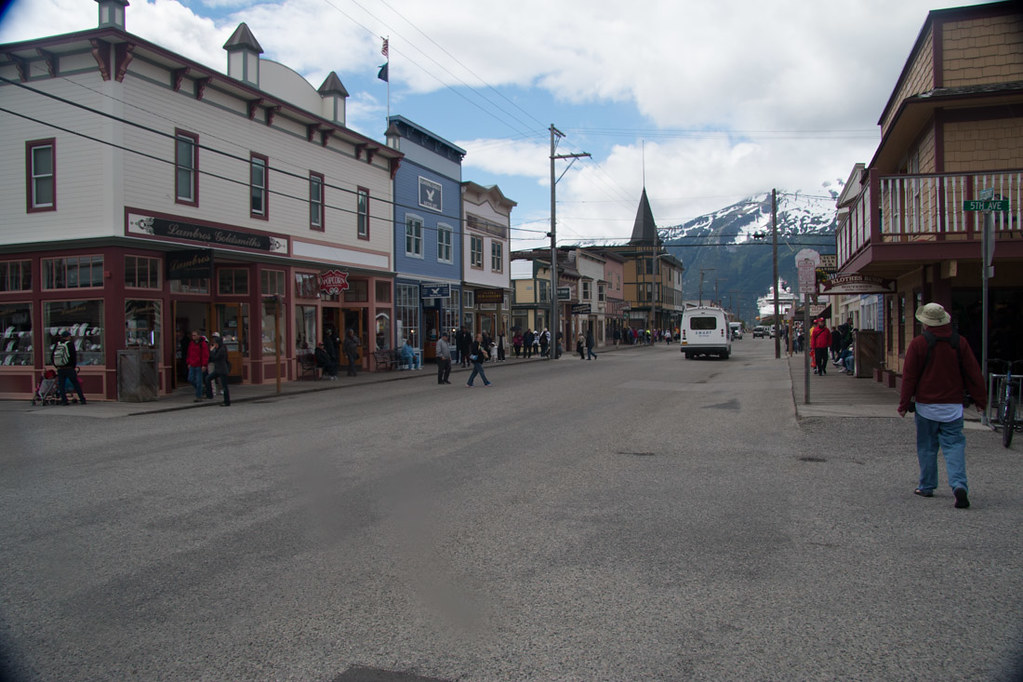 Skagway was quaint, but looked kind of “off.” On closer inspection, I think the buildings are all actually relatively new, but were built to look “old-timey.” I can’t say for certain, but it really looked like that after we walked around for a while. Kind of a Disney-ish vibe. But, with those mountains in the background, still very scenic nonetheless! 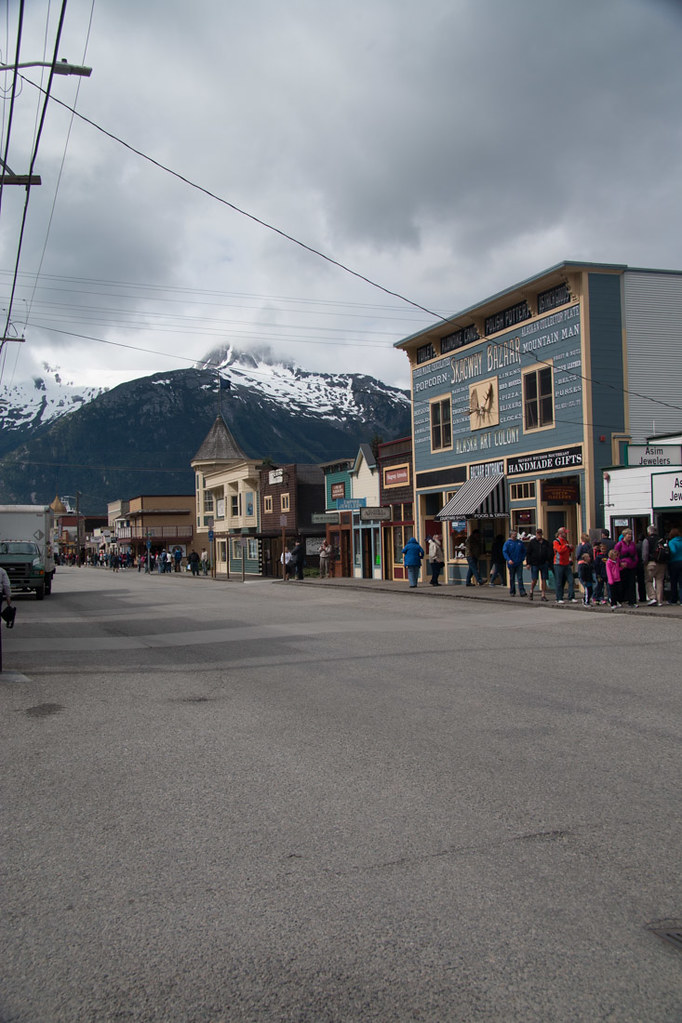 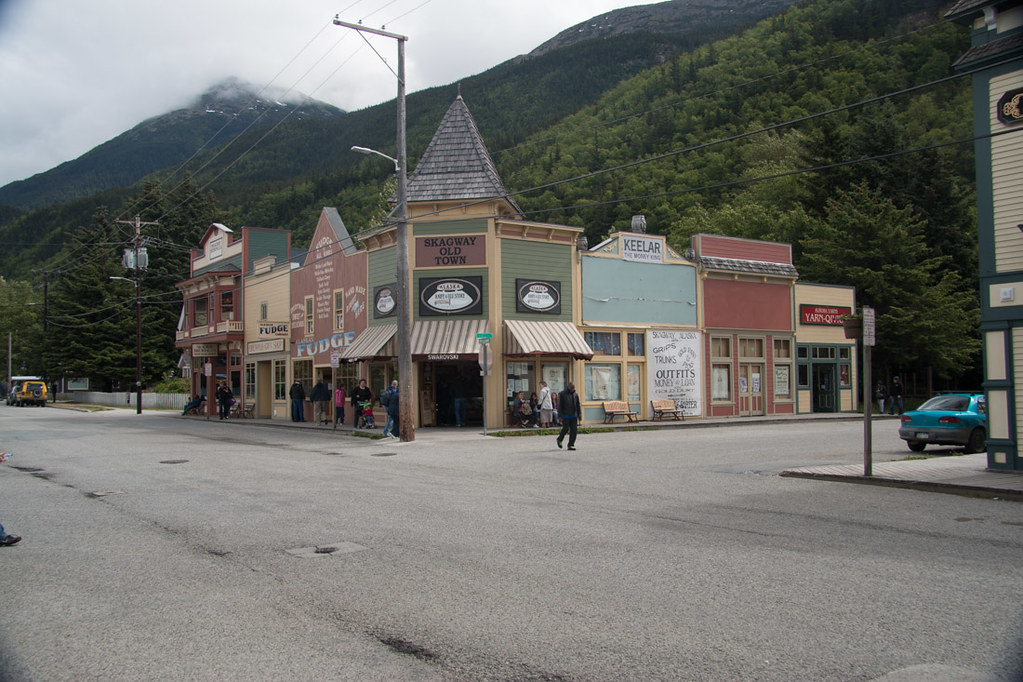 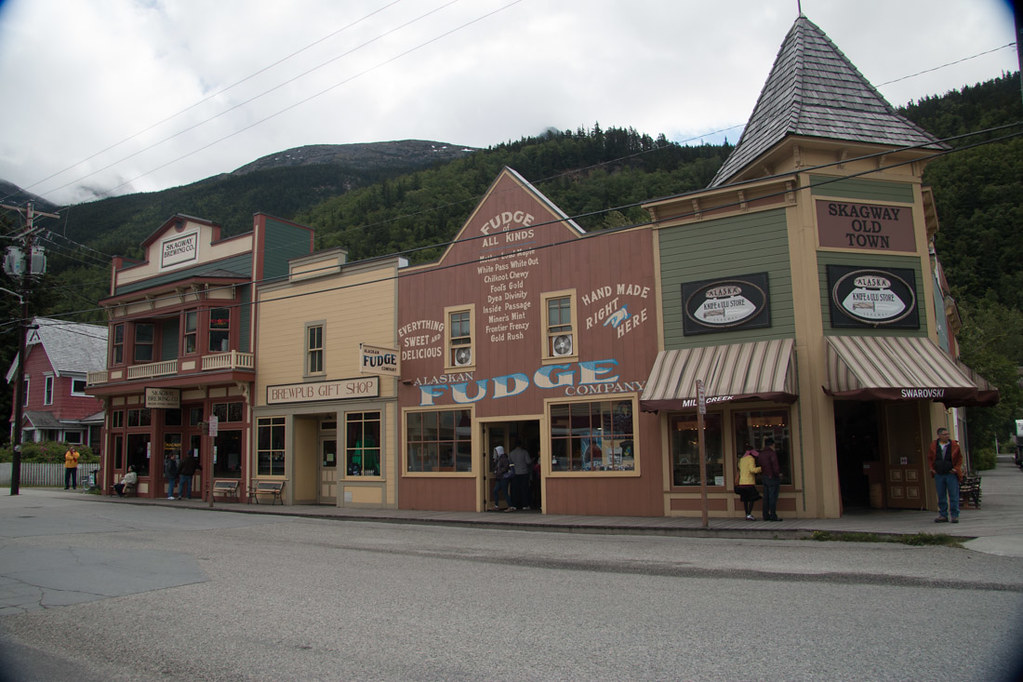 This was actually the first place Ken and I did any souvenir shopping. We bought a few souvenirs, for ourselves and for family, and then headed back to the ship to get some lunch before the train excursion departed.

My dad was also going on this railroad excursion, so we had booked a handicapped-accessible car on the train (we were able to request that by going to the excursions desk on the cruise ship).

The train actually picked up right next to the port. We waited for a few minutes until they called all aboard. 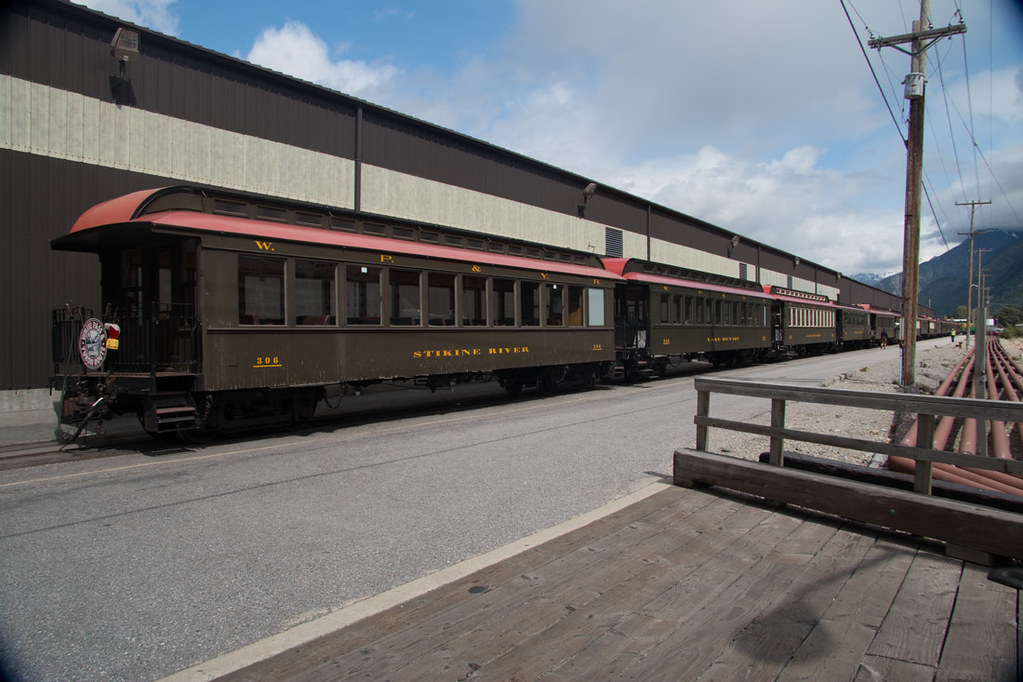 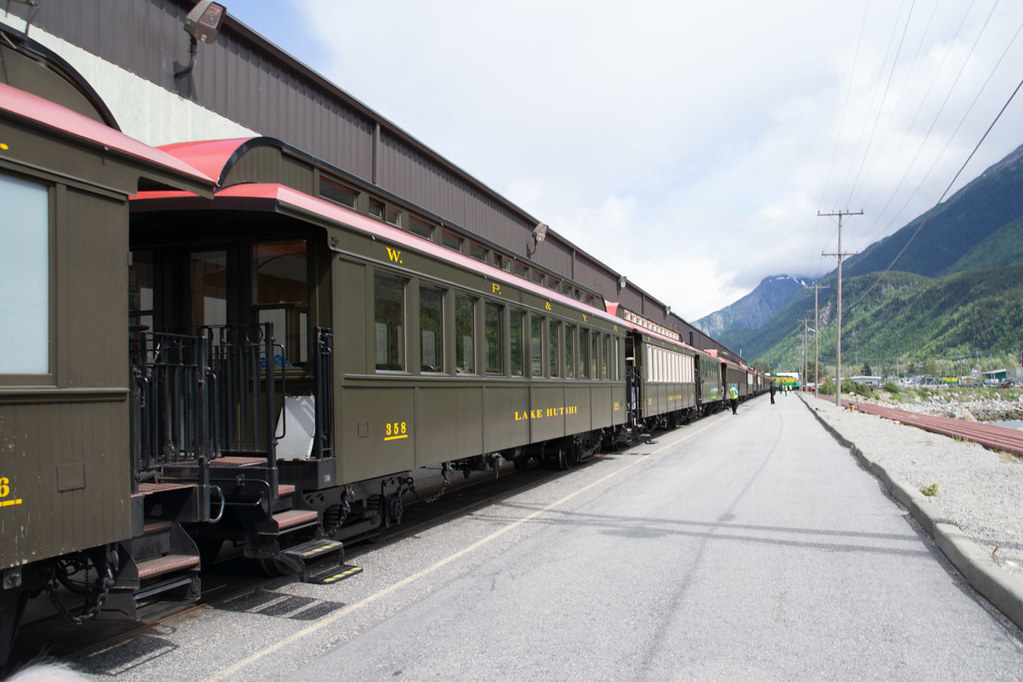 There was a small lift that my dad drove his motorized scooter on, and they lifted up each mobility-impaired passenger (there were several) one-by-one. It was very effective, and nice that it was available as an option, as the steps to board the train were small and fairly steep. As luck would have it, the train reserved for the mobility-impaired and their families/companions was the emptiest car on the train. 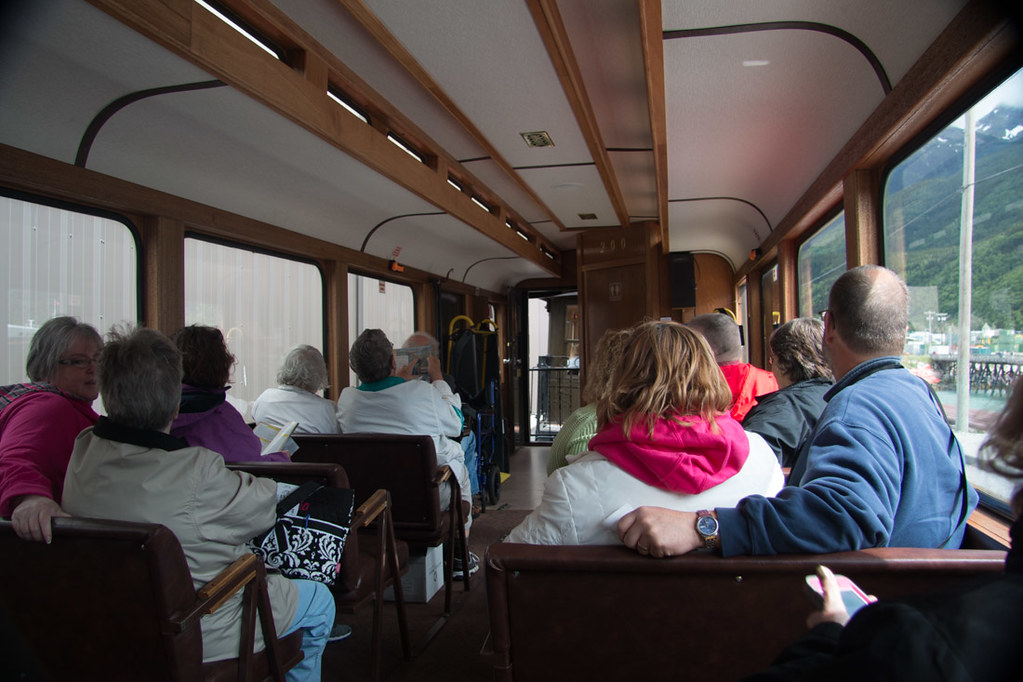 The train moved slowly and started the long 3000 foot ascension to the White Pass Summit. 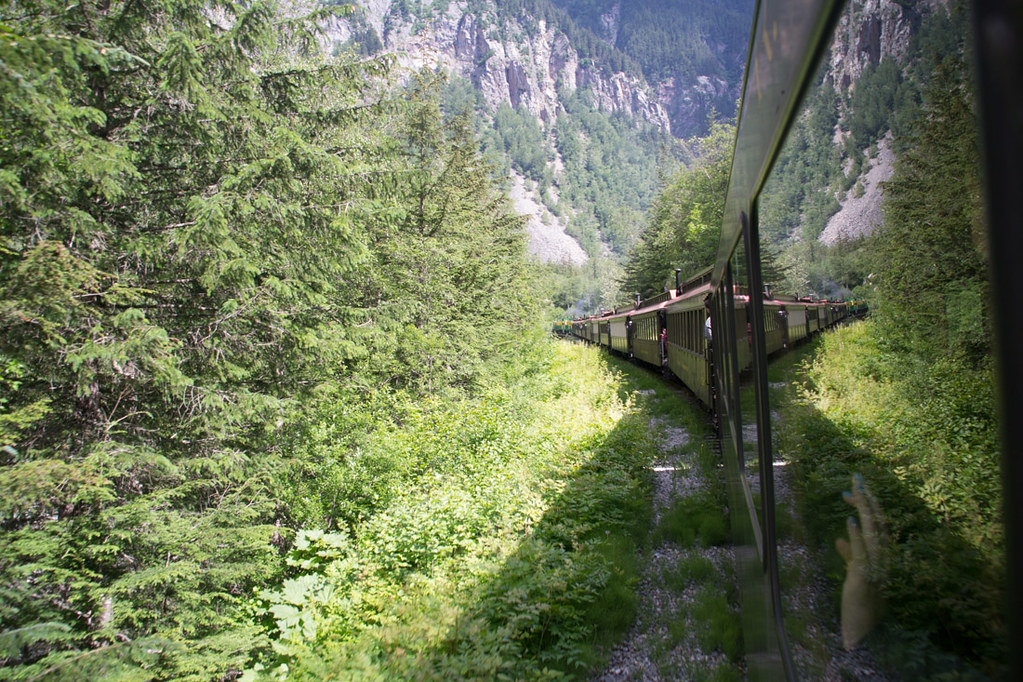 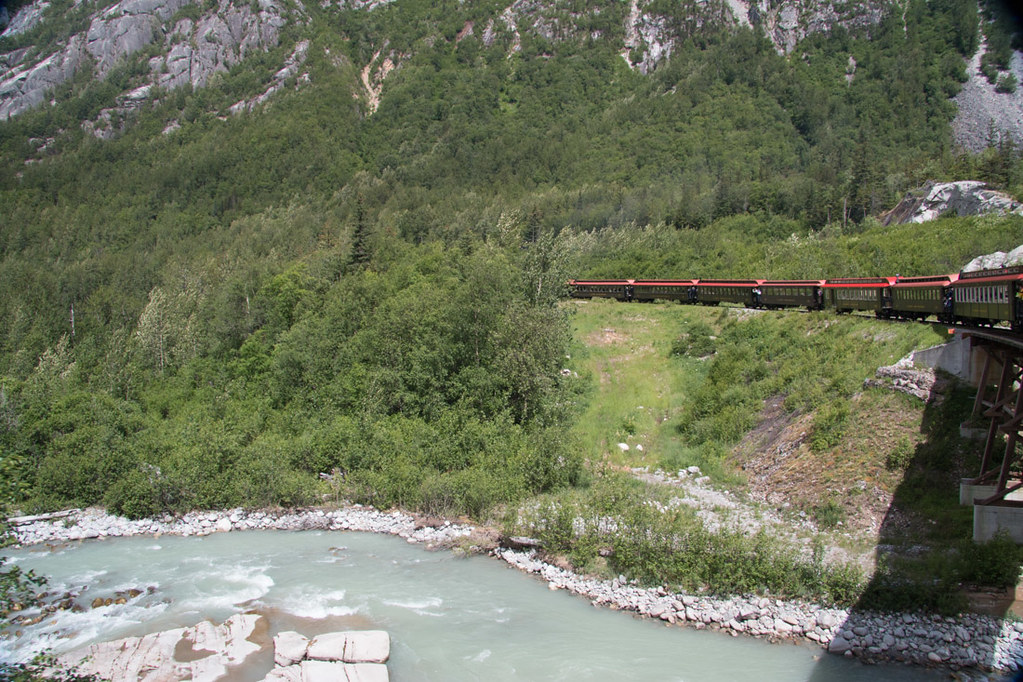 There was narration from a live tour guide over a train-wide speaker system, explaining the history of this route and the mountain we were climbing.

But man-oh-man, that scenery was AMAZING. I’ll let the photos do the explaining here: 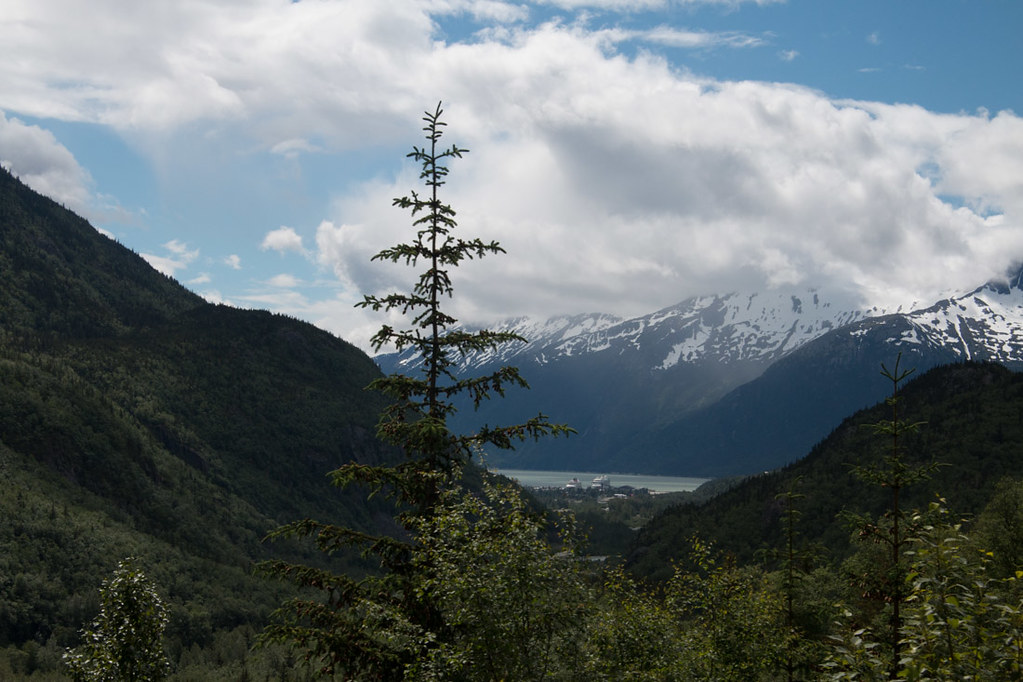 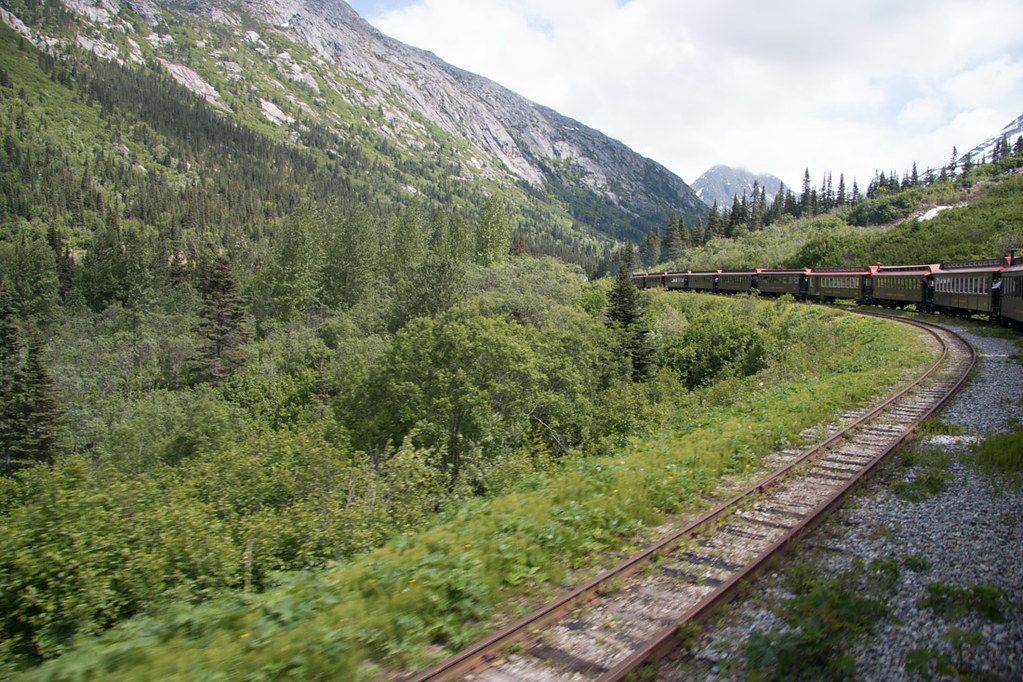 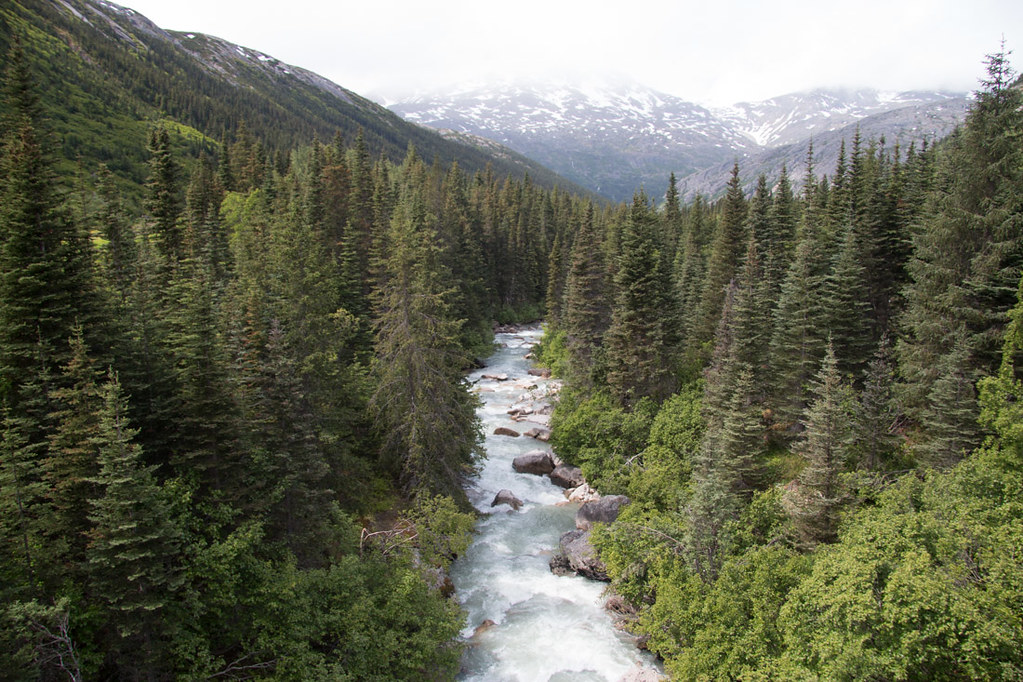 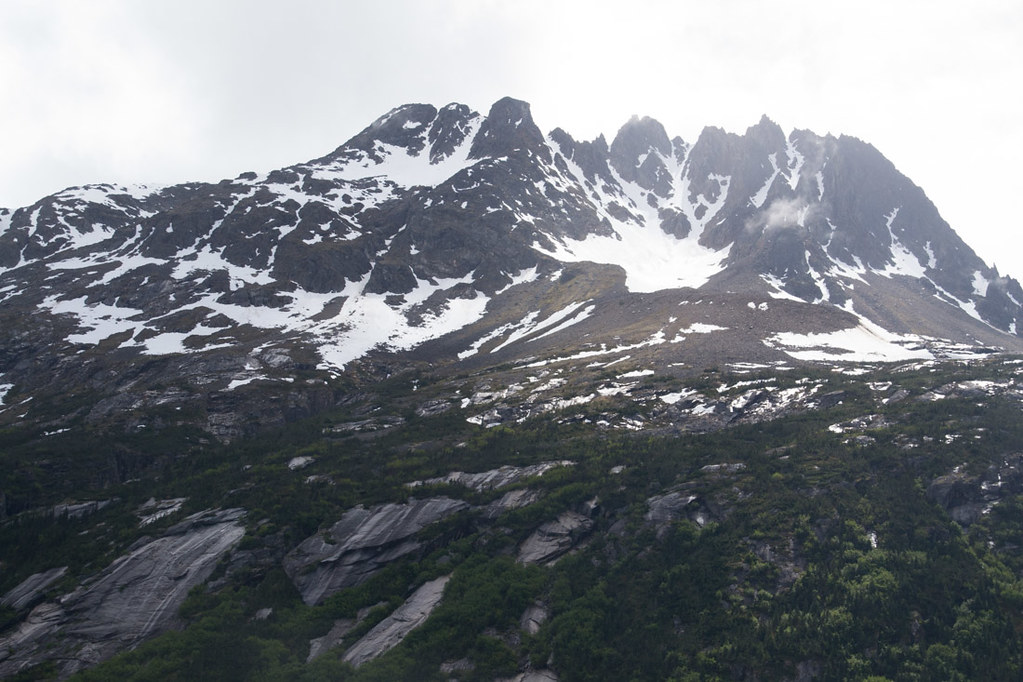 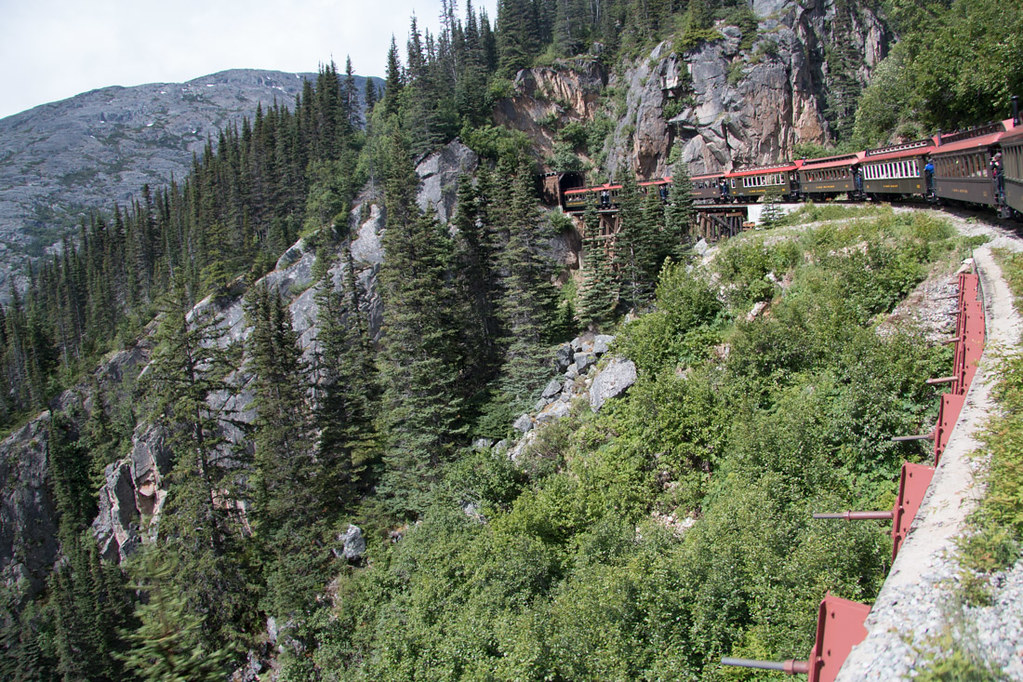 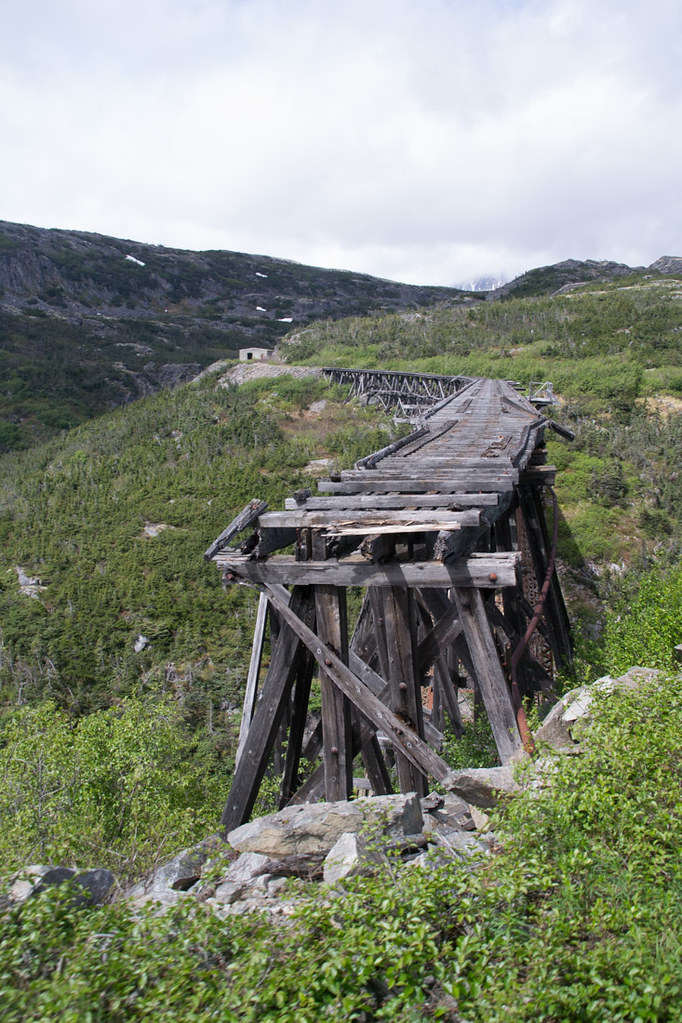 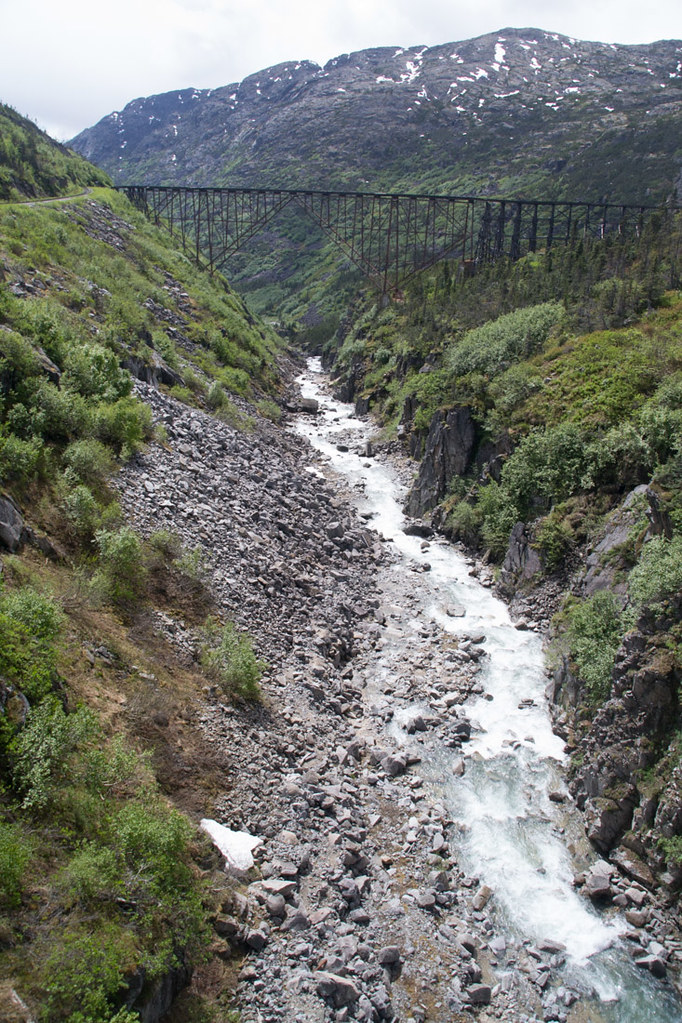 The views were good from inside the car, but we took most of our photos standing on a small platform outside each car. 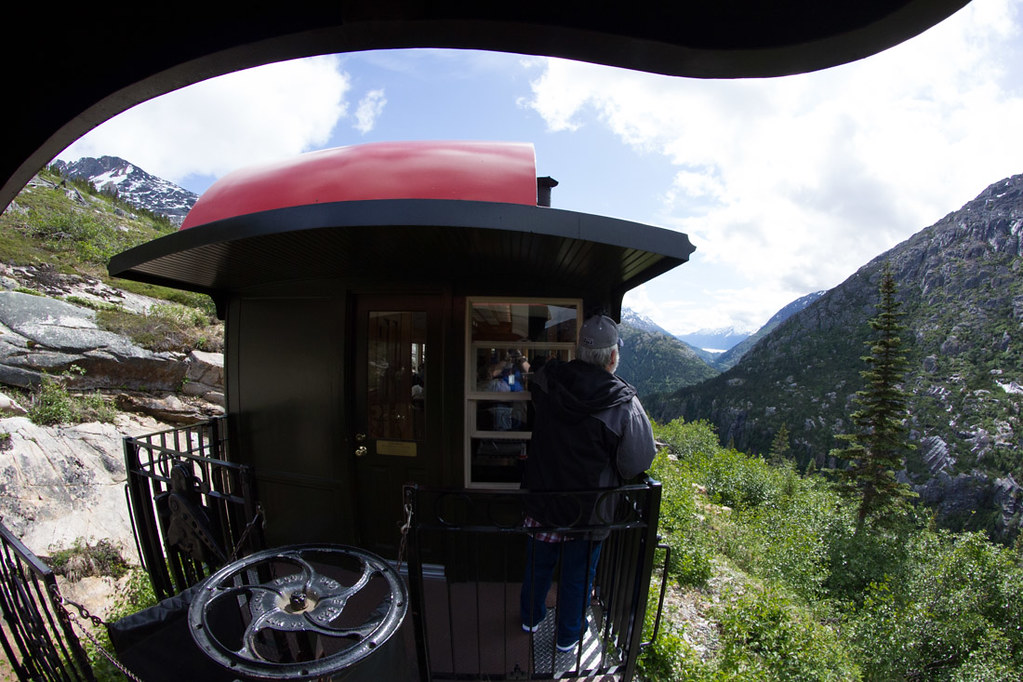 As we approached the summit, the guide explained that we were briefly going be crossing the Canadian border. But, since we weren’t getting off the train, we didn’t need our passports! The American and Canadian flags denoted the border. 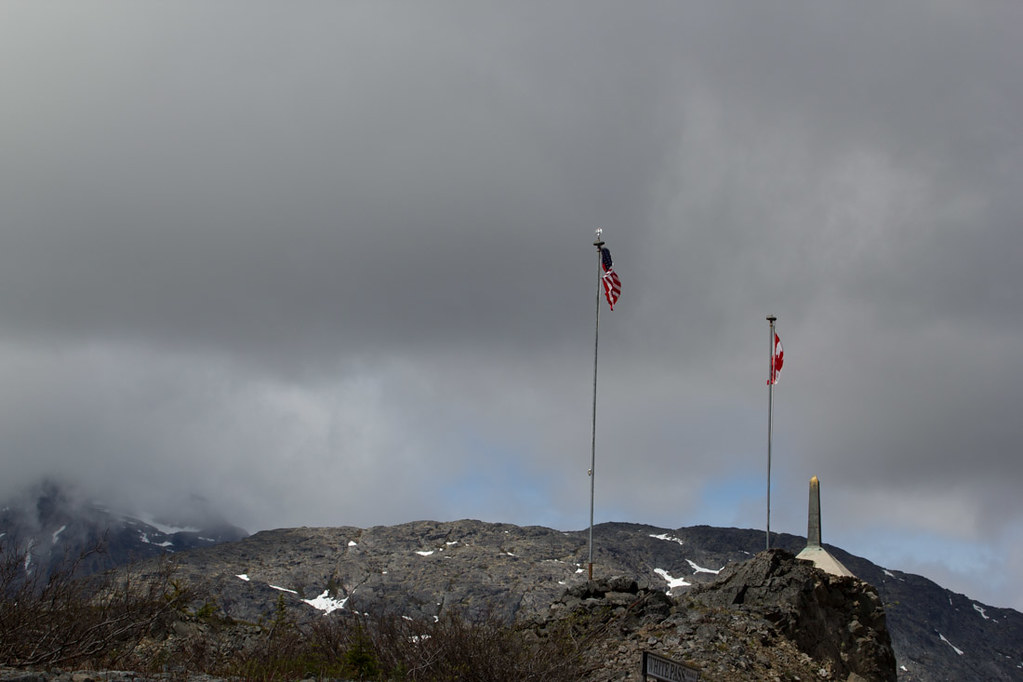 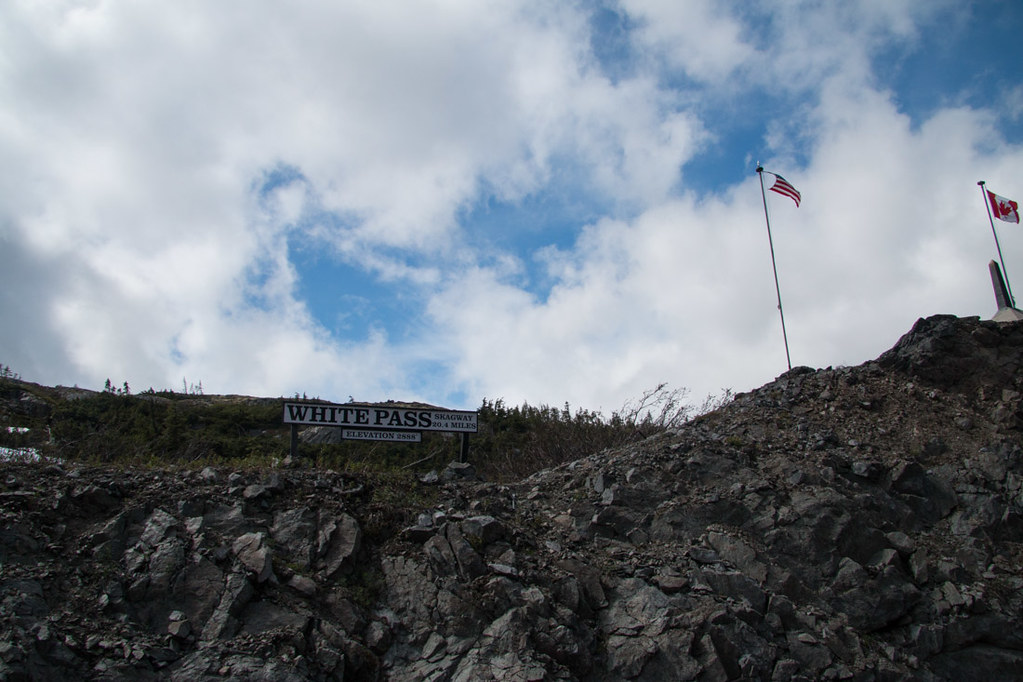 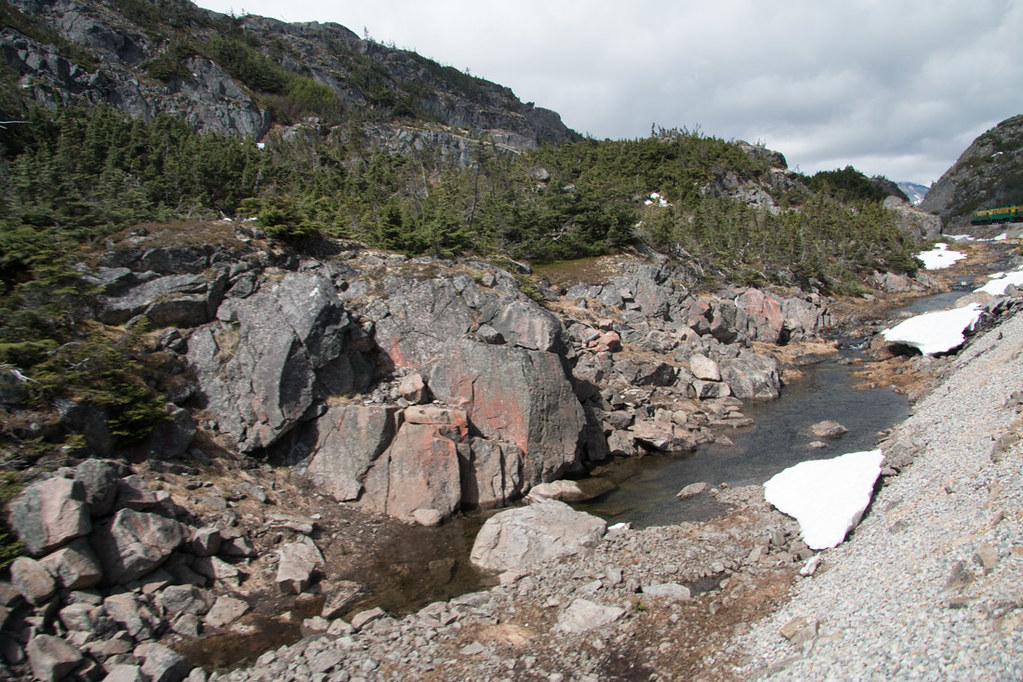 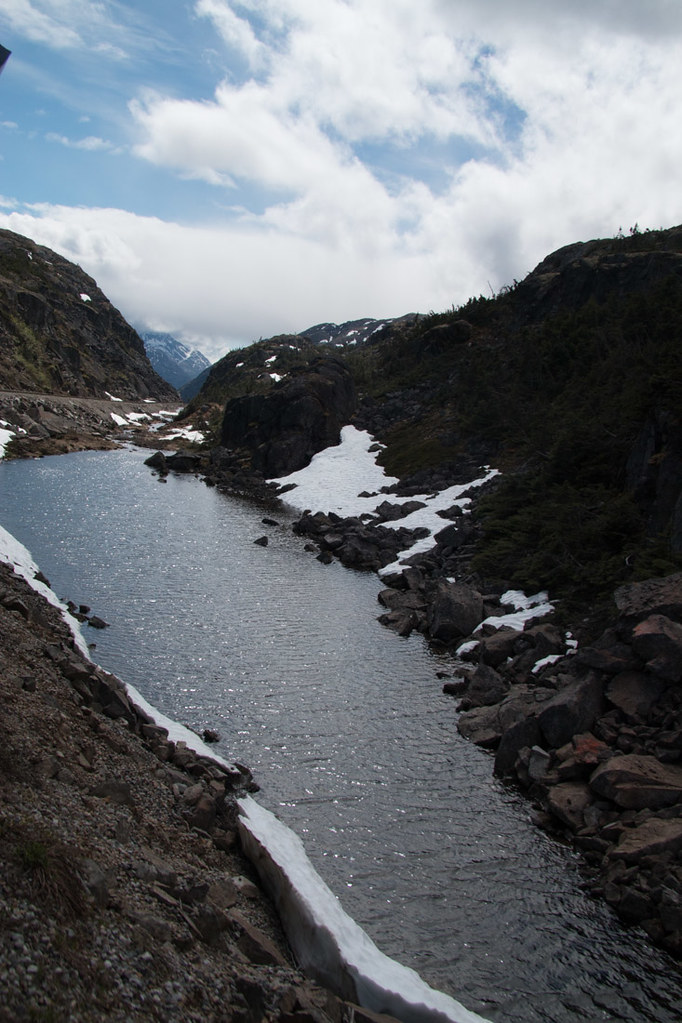 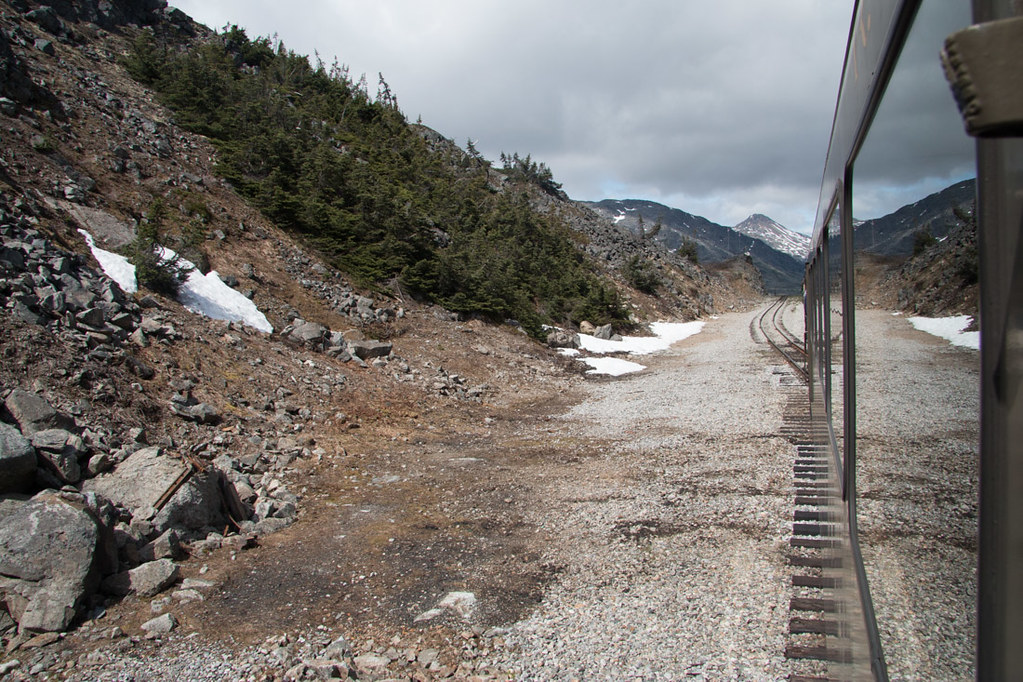 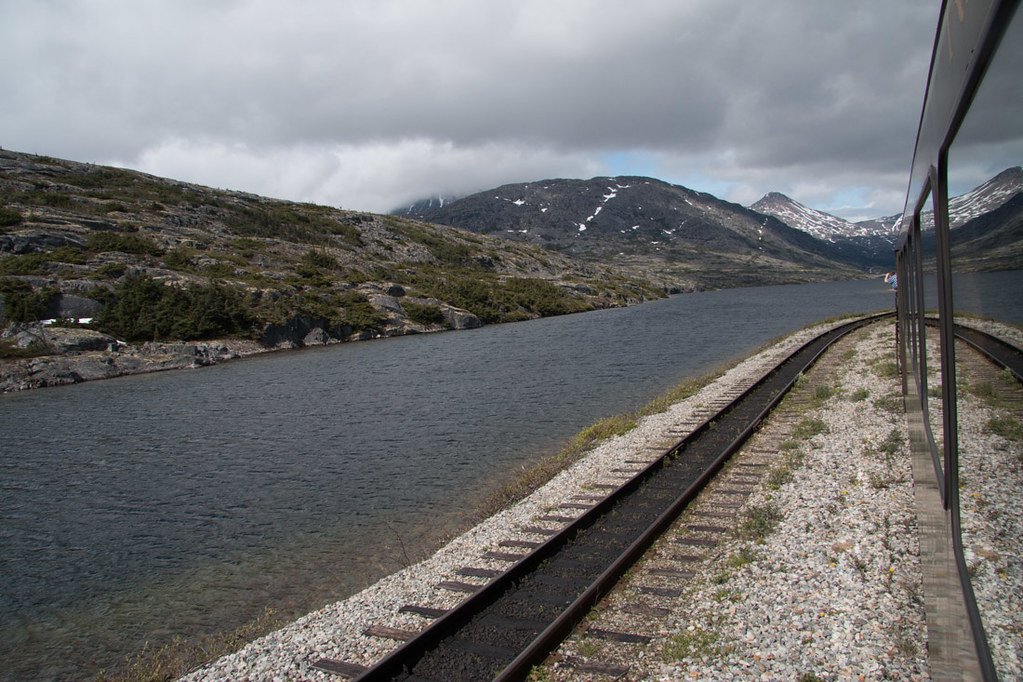 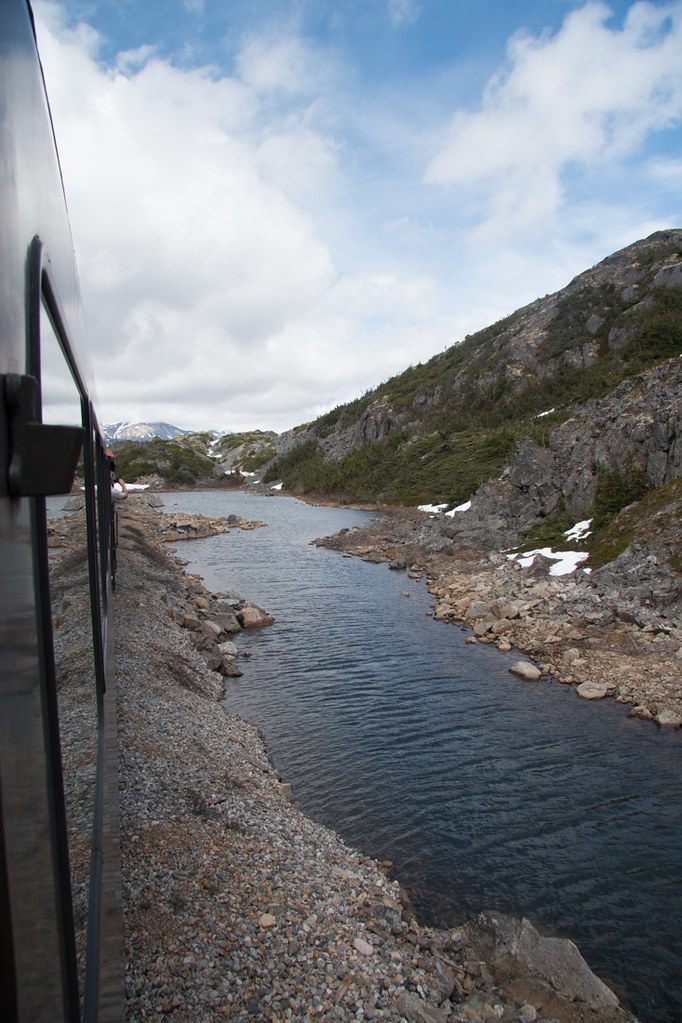 The guide also explained how to “flip” the seats in our train cars so we wouldn’t have to sit backwards on the way back down the mountain!

I will say that the trip back down the mountain was not nearly as pleasant as the trip UP the mountain. I don’t know much about train engines and how they’re powered. I might be a bit off in my description, but this is just how I recall the guide explaining it, so forgive me if I’m a bit off. It seems like this train was actually gas-powered, which is fairly unusual. The train seemed to use a tremendous amount of gas as it braked going down the mountain. The braking was frequent and jolting, and the gas fumes became overpowering at times. I’m not terribly prone to motion sickness or anything, but the jolting motions coupled with the strong fumes made me a bit queasy on the trek back down the mountain. If I recall correctly, there are some trains that operate on that same line that are NOT gas powered, so you might have a different experience.

But, on the other hand, I did manage to capture photos like these (one of my favorites from the entire Alaska Cruise!) on the ride back down the mountain: 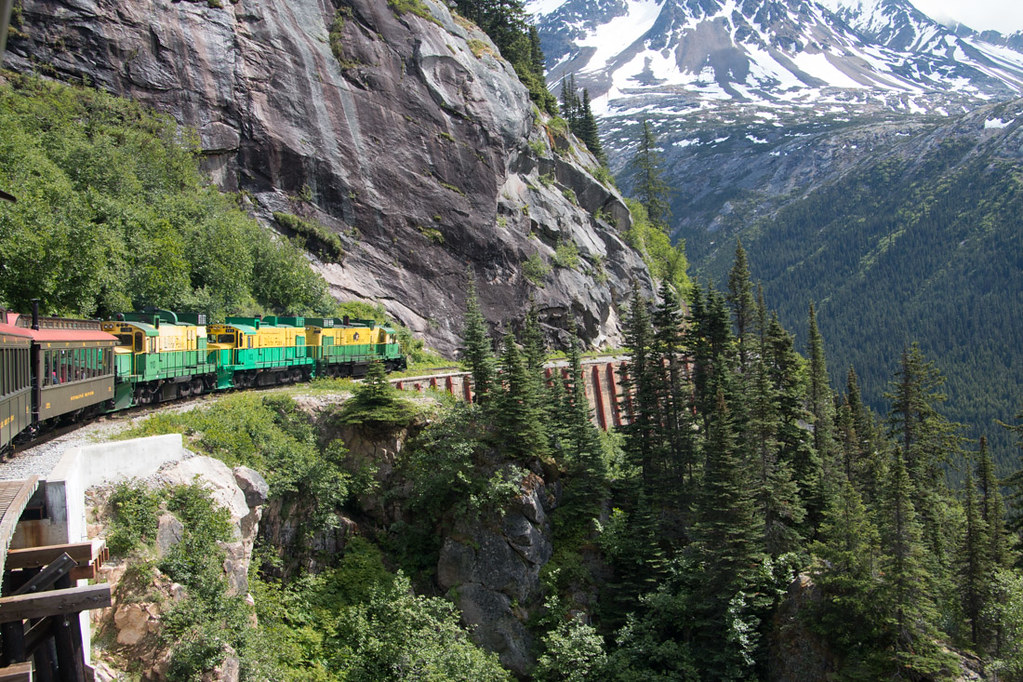 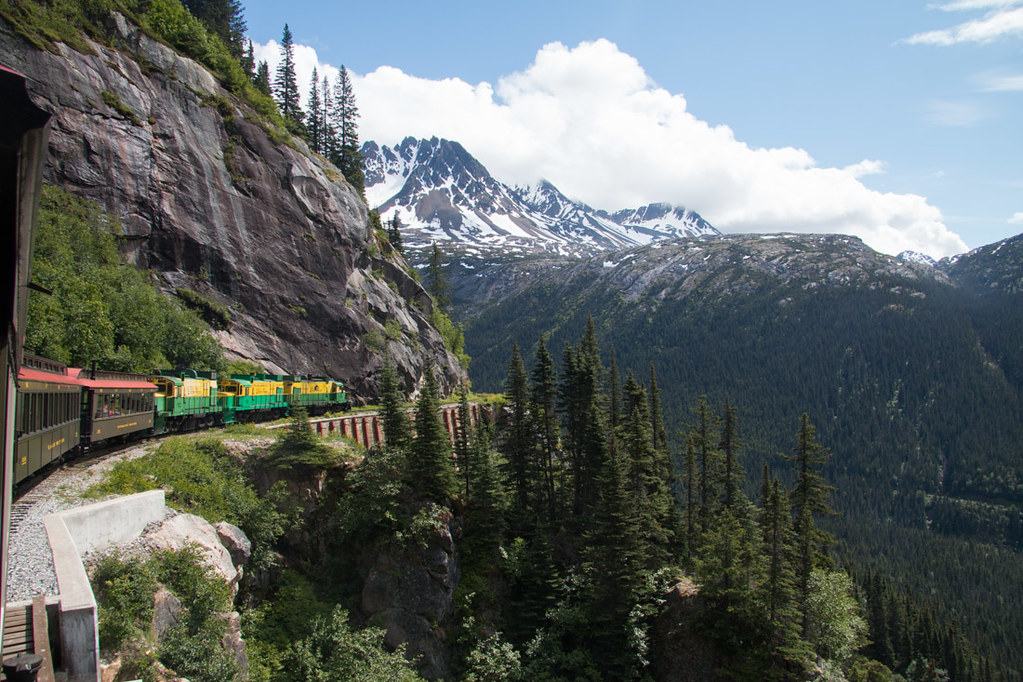 Once we got back to the bottom, we had to wait a while to disembark since my dad needed to use the “lift” thing to get him (and his scooter) off the train. By the time we were off the train, the line to board the ship was VERY long, since basically every person on that long train was a passenger on our cruise. Luckily a kind cruise employee noticed my dad in his scooter and offered us a separate ramp to board the ship, and helped my dad navigate his scooter over some of the bumpy thresholds on the ramp.

And that was it for our time in Skagway. Despite the less-pleasant ride back down the mountain, this was an incredible option for a cruise excursion. Gorgeous scenery and amazing history.

Downsides of Being a Long Distance Landlord (so far)