I had been putting off writing a “review” of Mardi Gras grandstand options for a while. Mostly because I did a pretty terrible job of photographing the actual grandstands and locations. Go me. But, I figured others may find information helpful, especially because when I was researching grandstand options, I couldn’t find much information. And anyway, we have plenty of pictures that we took FROM the grandstand locations, and I figure that’s what is most important anyway, right? The view? 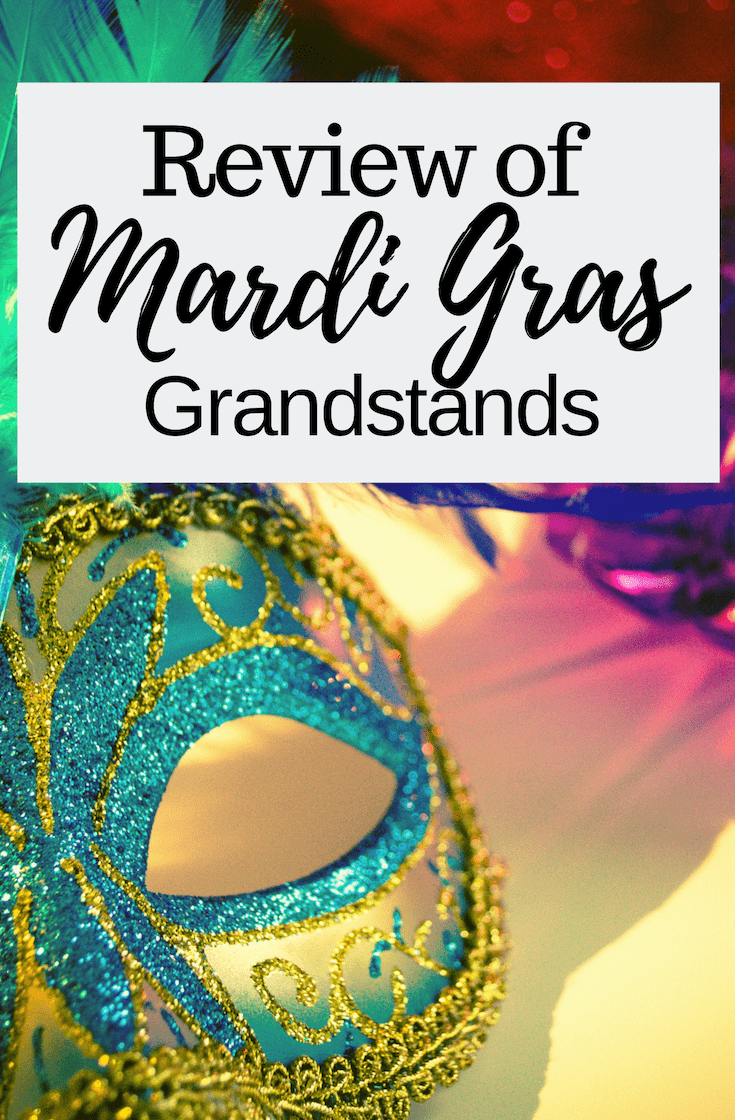 I covered in this post why we were interested in getting grandstand tickets for some of the parades. But, in case you don’t feel like clicking, here’s the excerpt: 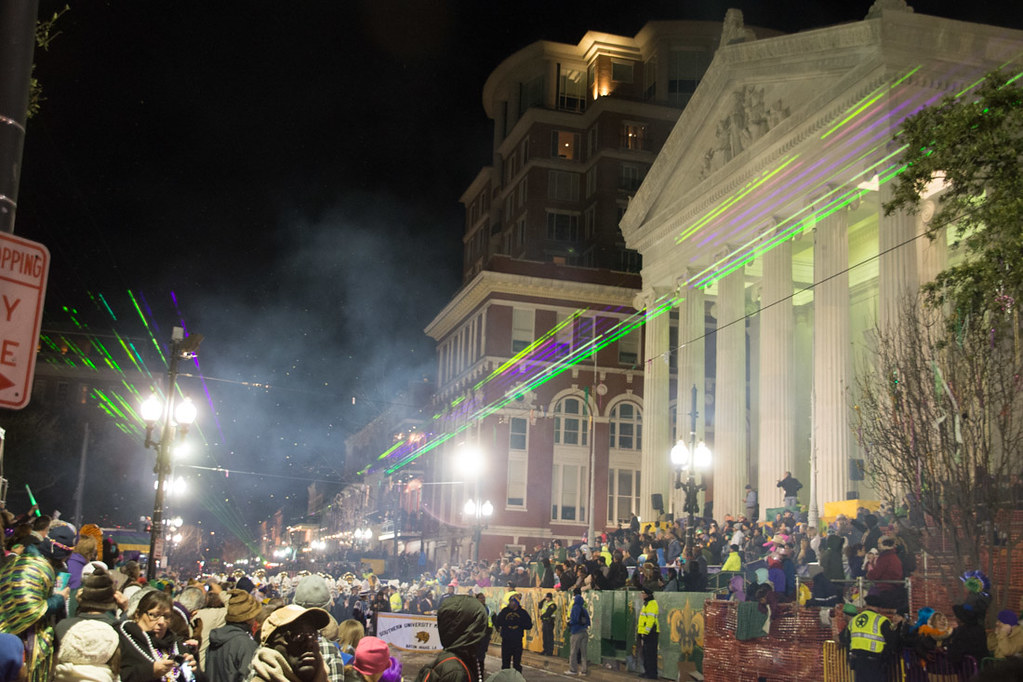 Because we weren’t sure if any of the grandstands would be particularly better than the others, we decided to spread the love among the different options.

Not cheap, I realize, but because of the reasons I outlined above, it was money well spent for us.

So, how did we like the grandstands? They were great! One of the common complaints about the grandstands that we had read online was that people felt too far from the action or not like you were a part of the parade. I can say that is definitely not the case! And for what it’s worth, we also watched plenty of parades from the sidewalks when we didn’t have grandstand tickets (like the Krewe of Iris, Krewe of Tucks, and others). However, we just kind of happened-upon those parades. We didn’t stake out spots or watch them for hours on end. We did end up getting closer than what I thought we would though without grandstand seats.

It’s also worth noting that sometimes these parades were VERY VERY LONG. The Bacchus parade kept getting “stuck” and there were very long waits in between each float. So, it was nice to have a spot in the grandstands to sit while waiting for the next float to come!

For those interested, here are some of the various views from the grandstand areas!

Ready to book your stay in New Orleans during Mardi Gras?  Check out my hotel review of where we stayed, the Roosevelt.  Want to check out other hotels?  Head over to booking.com to see their deals on hotels in New Orleans.

It was night time, so please forgive how dark the photos are! But here are the Place St. Charles grandstands before the start of Endymion: 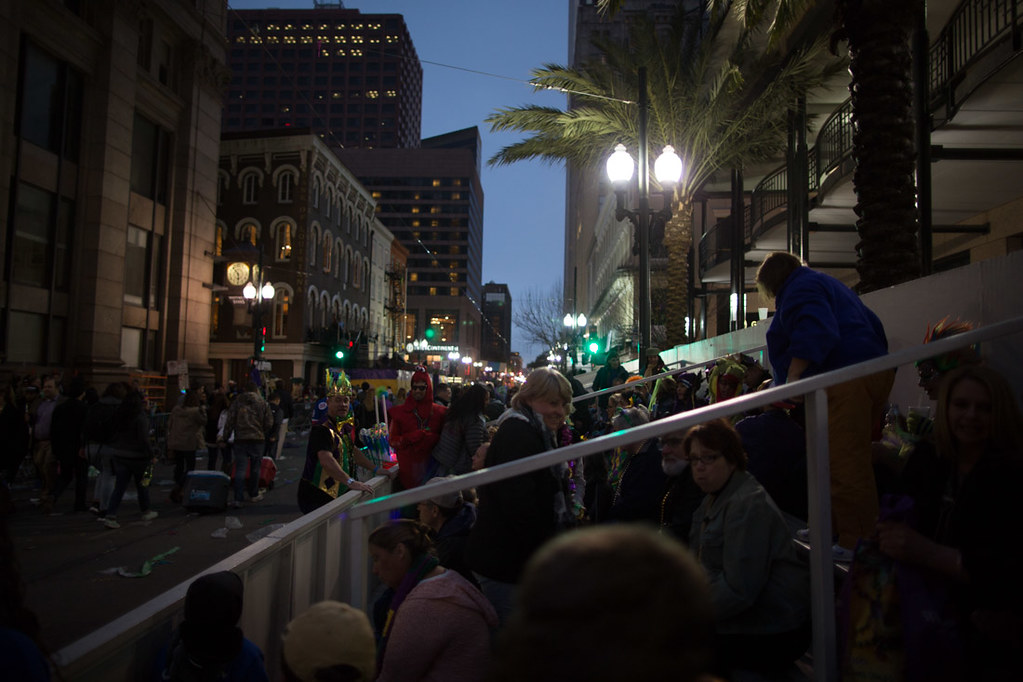 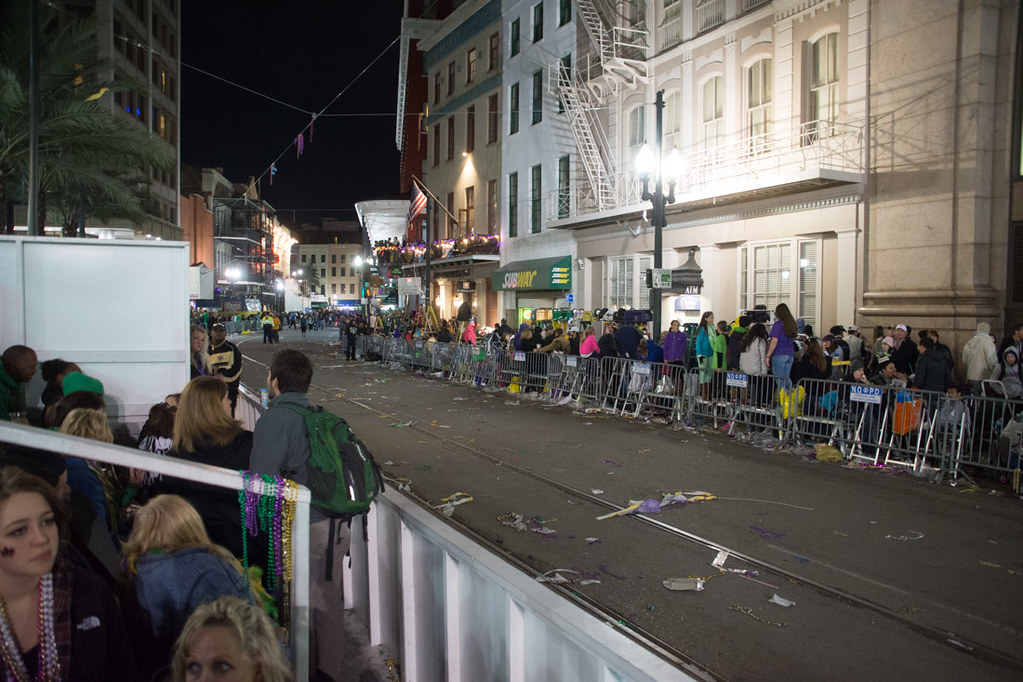 The grandstands were not very high, so there weren’t that many people behind us, and although the grandstands were full, it didn’t feel overly crowded (as you can tell by looking behind us in this selfie). (For what it’s worth, the Lafayette Hotel grandstands the next night were much emptier). 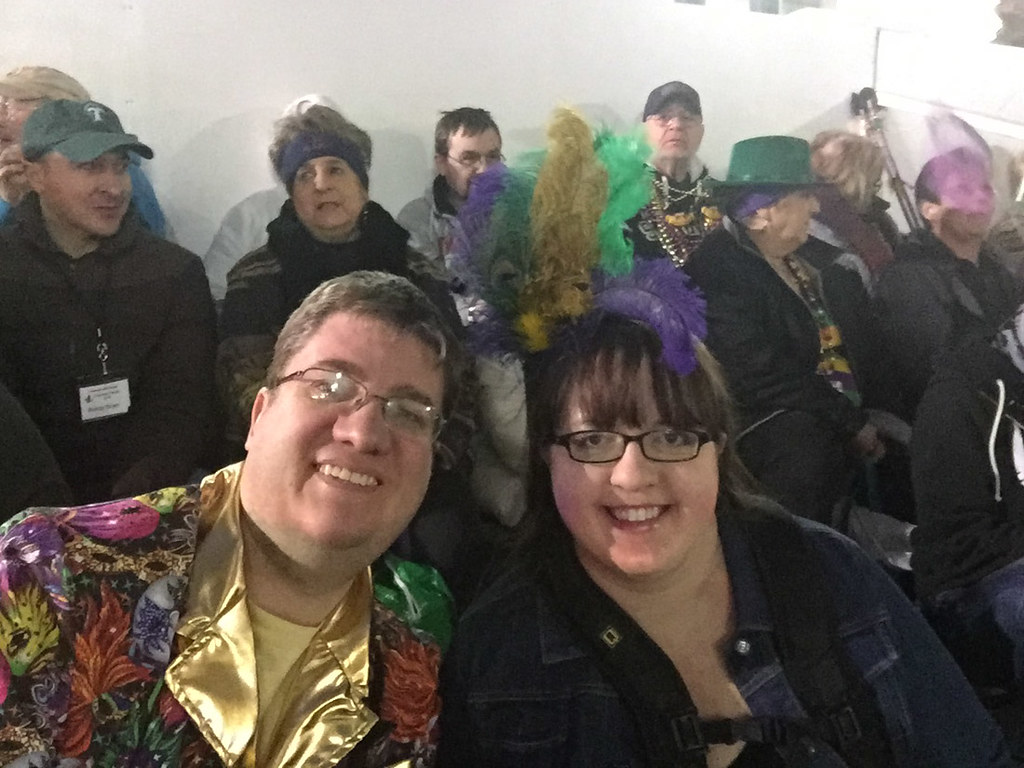 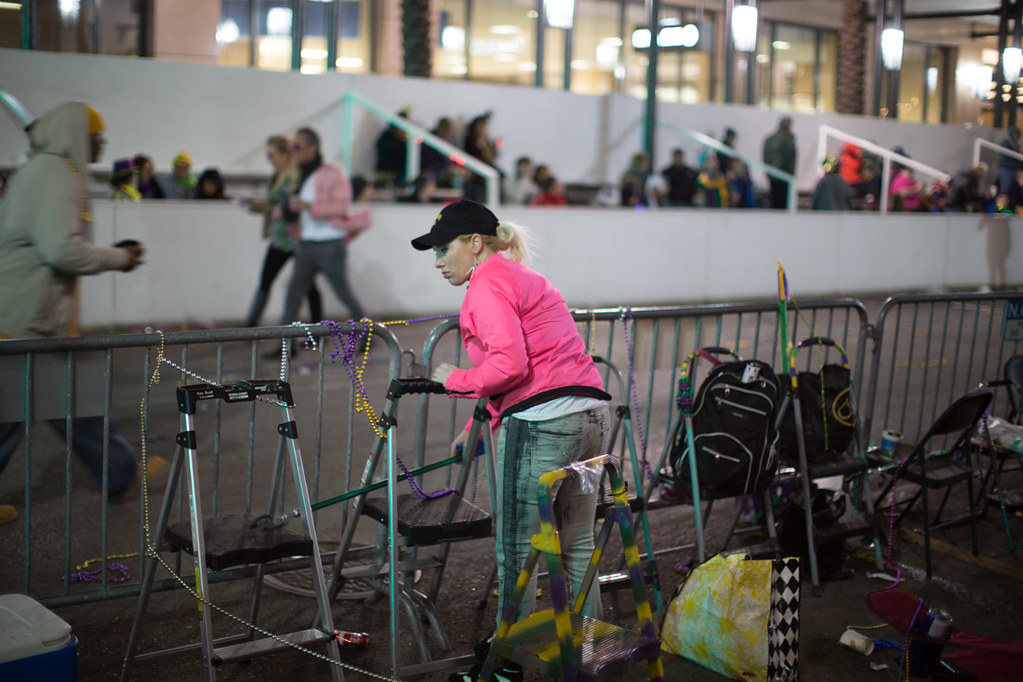 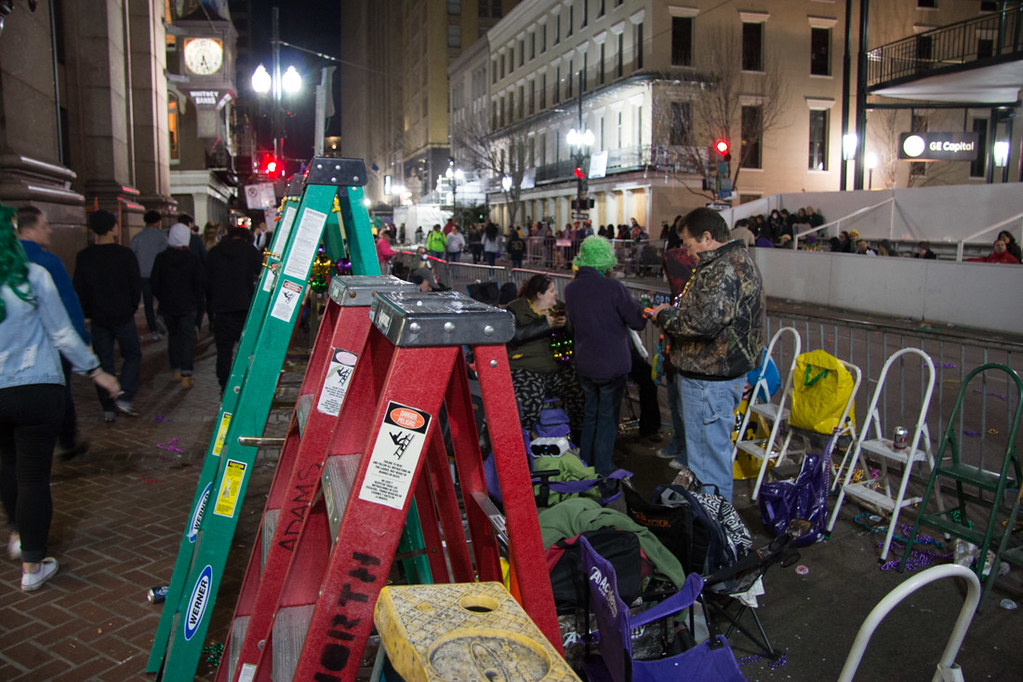 We were in the second row of the grandstands, and we still had a great view! 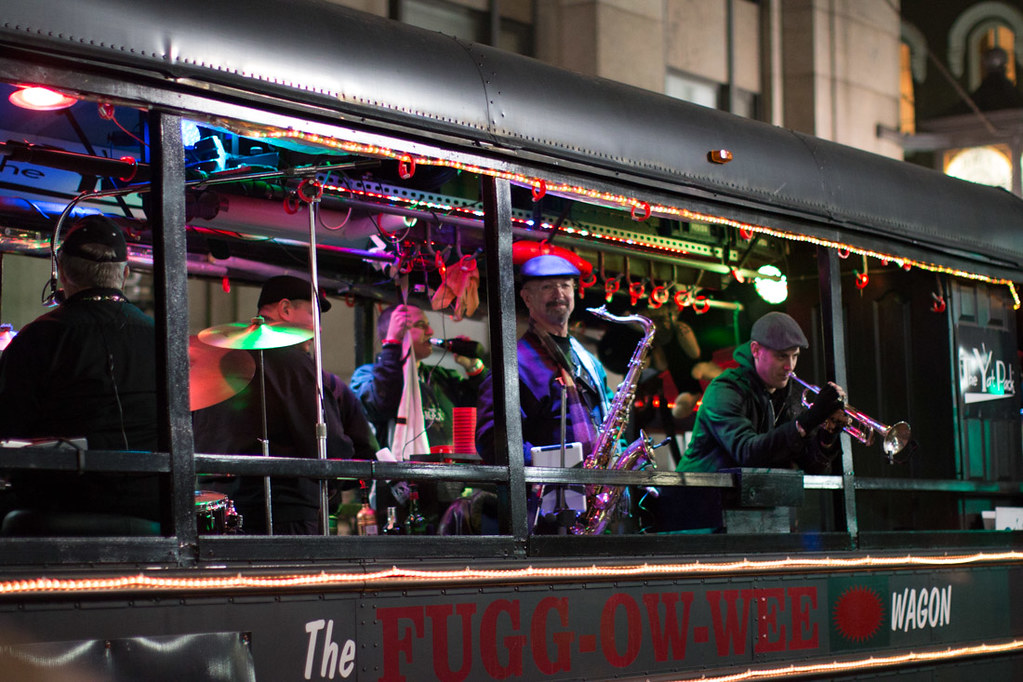 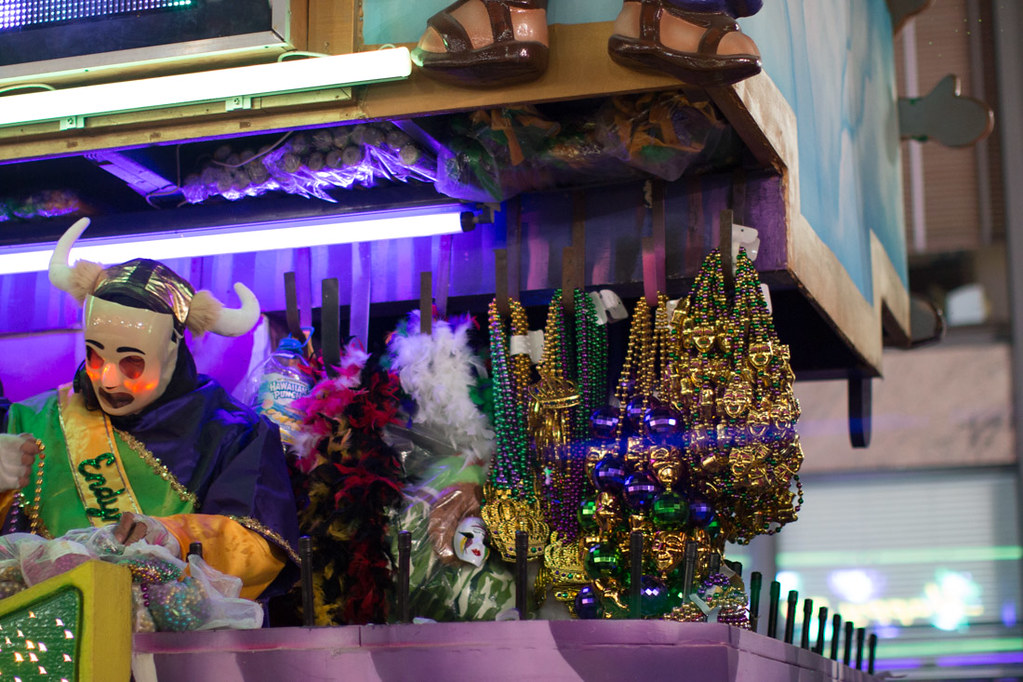 In fact, when people did “get in the way” of my photos, I feel like it conveyed how fun and festive the atmosphere was! 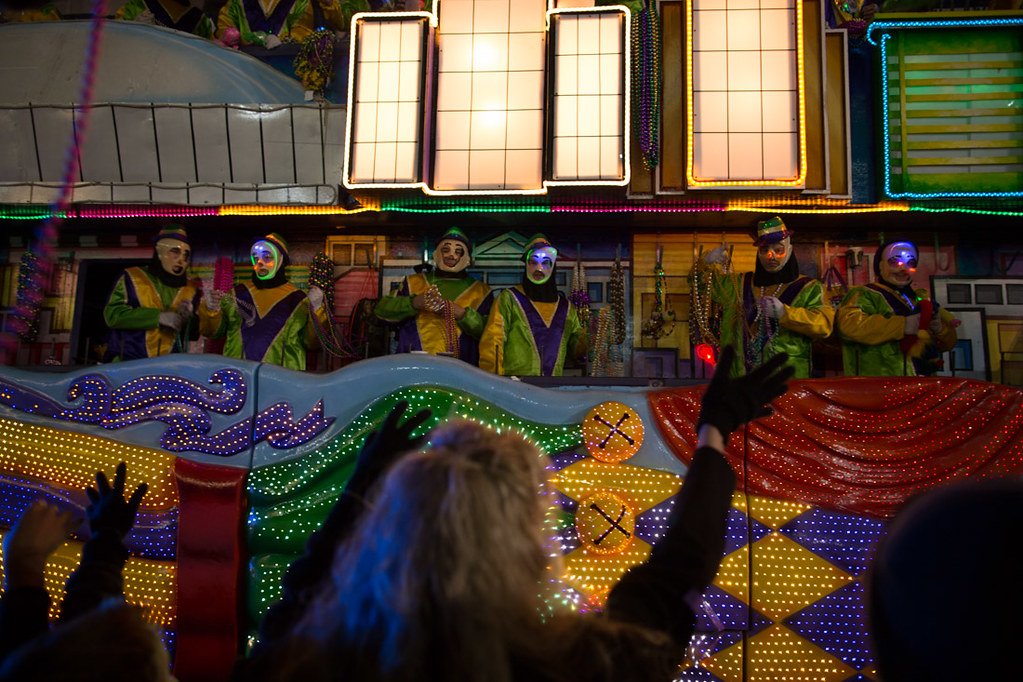 For what it’s worth, the Krewe of Endymion approached from the LEFT of our grandstands at Place St. Charles.

For this parade, I didn’t take a single photo of our actual grandstands. I’d say that I liked this location LESS than the Place St. Charles grandstands, although they were still just fine. My main complaint is that there’s a lot of excess light from the nearby buildings, which kind of “takes away” from the fun lights on the floats.

For example, whatever that building is here with the columns was a bit too bright and kept affecting my photo exposures: 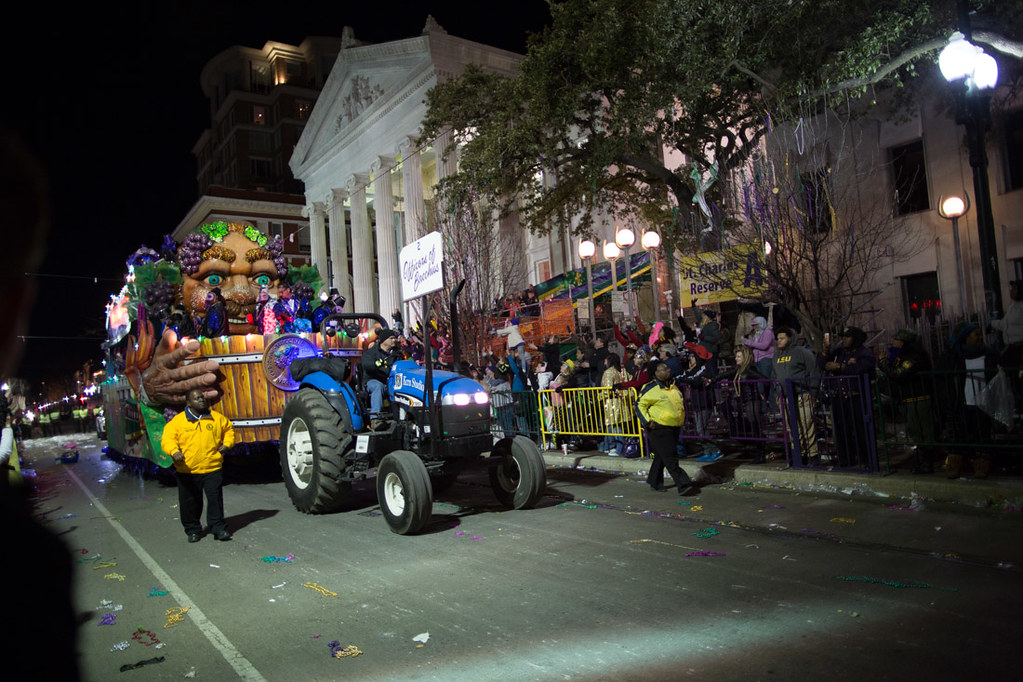 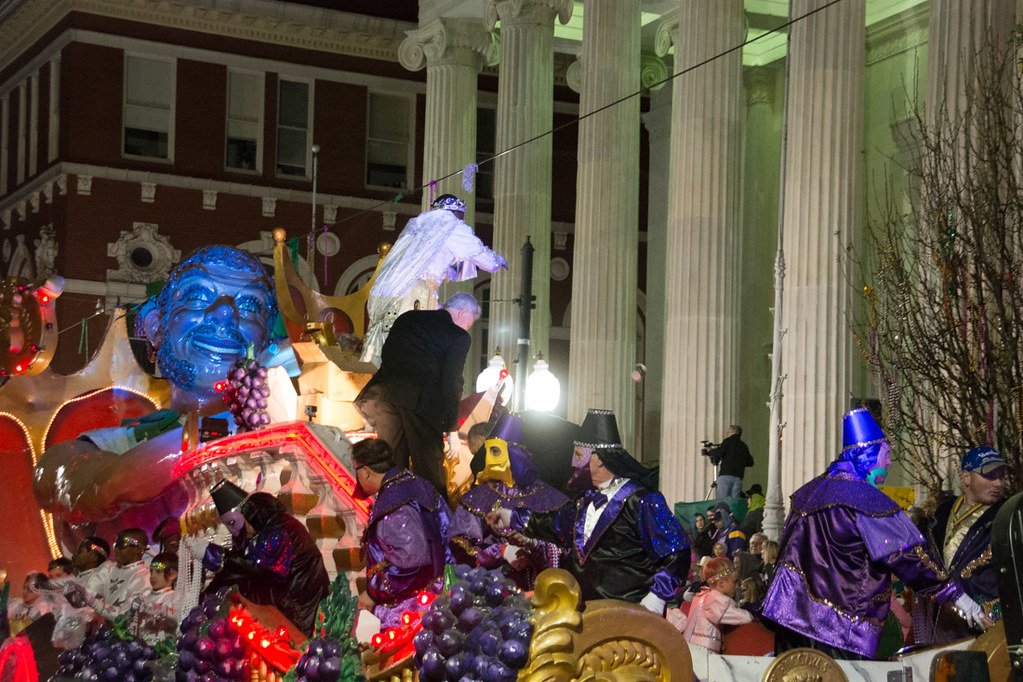 However, there were more grandstands in this area (Lafayette Hotel) than there were in the Place St. Charles grandstands, so it felt a little less cramped. There was also more space between the first grandstand row and the metal street barriers, meaning there was more room for people to go and take turns to stand in front of the grandstands. We We lucked out with fairly empty grandstands at this location, although that might have been because it was very cold, and that the Bacchus parade was taking FOREVER to pass because it kept getting “stuck.” So there were long delays in between almost every float and a lot of people started to leave.

We got some great photos of the parade though! 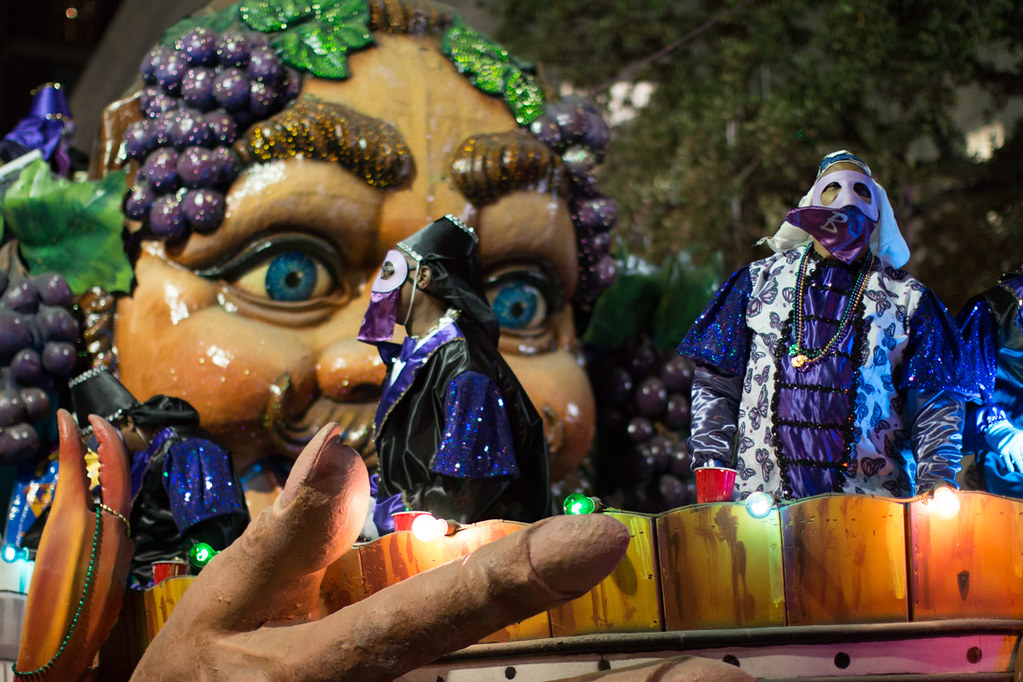 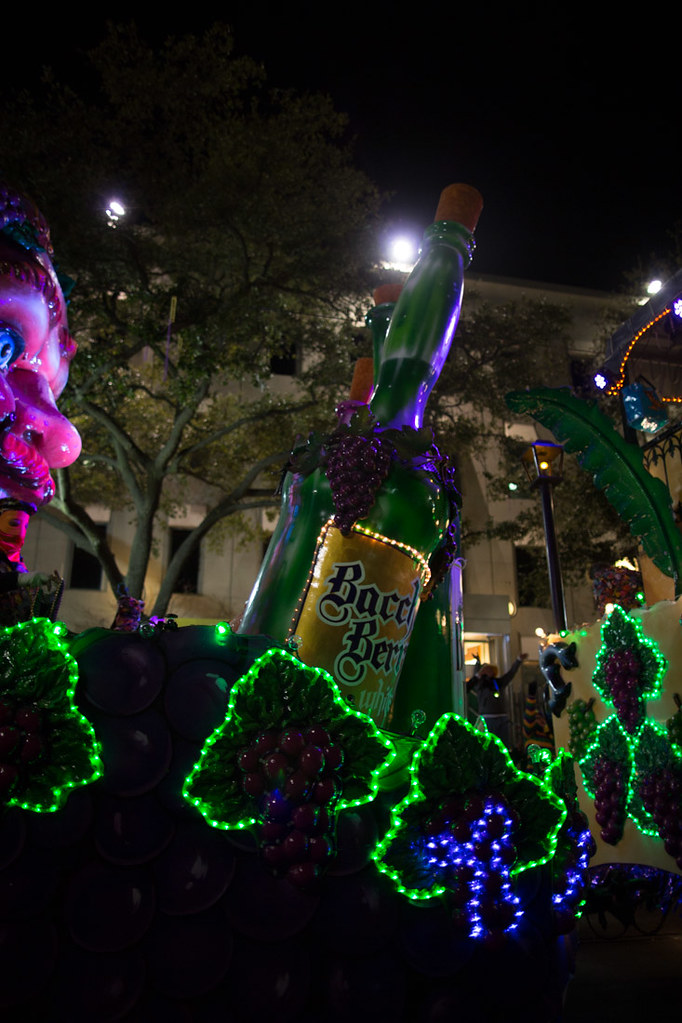 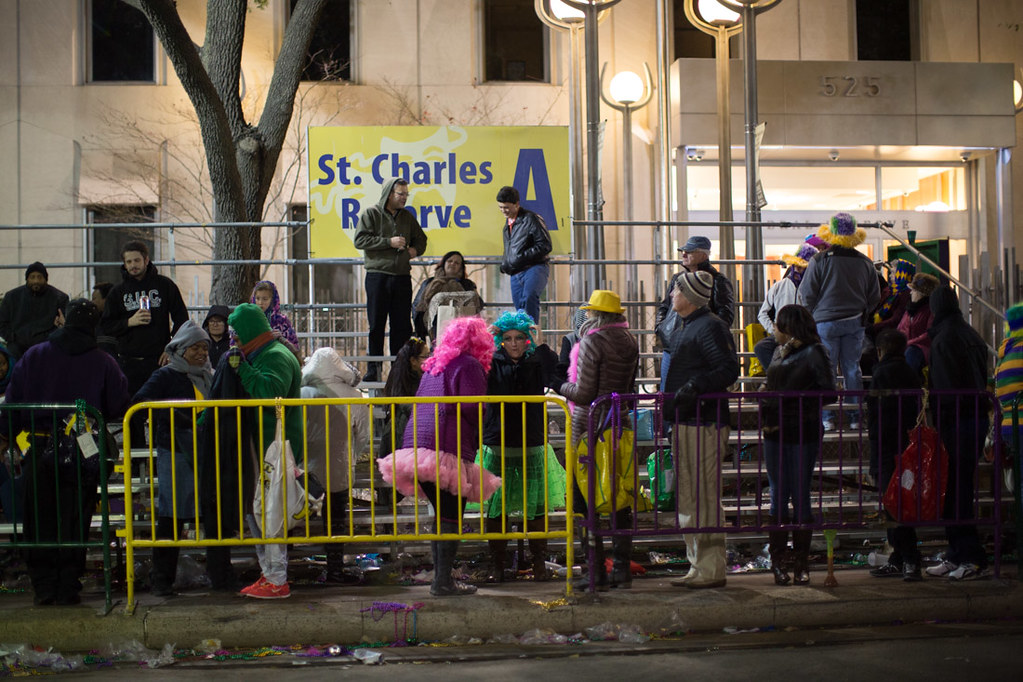 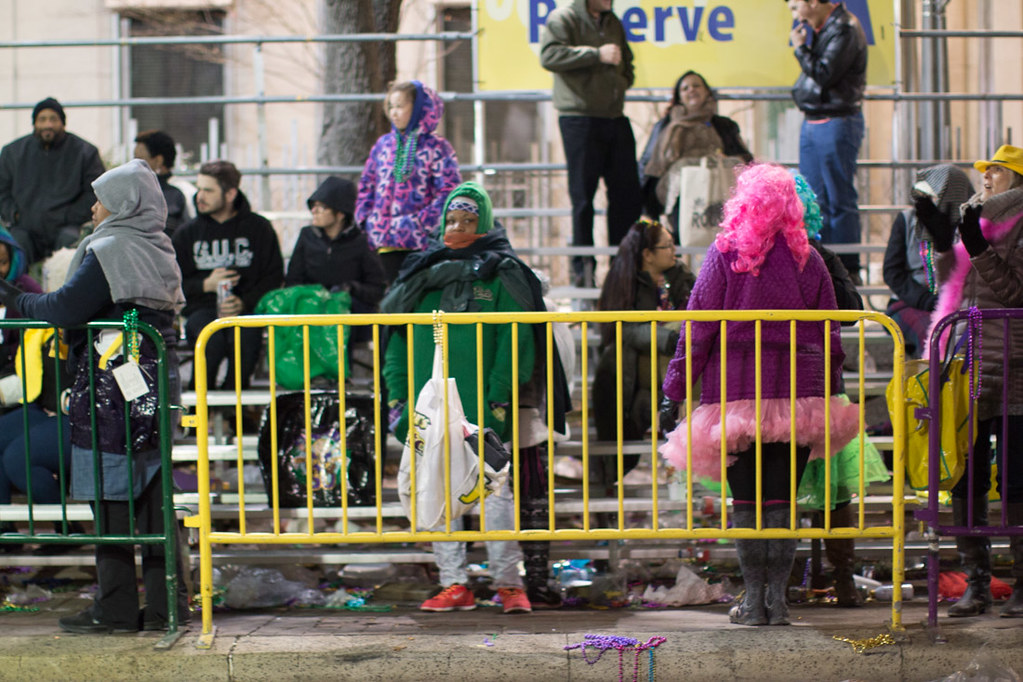 As you can see, those ones weren’t very crowded either. But again, not sure if that’s because it was so cold.

One upside of this area though was that we could hear the parade emcee. They must broadcast from that area. We didn’t even know there was a parade emcee the night before when we were in the other grandstands!

Again, keeping with my theme of completely forgetting to take photos of the actual grandstands, here is my best photo I have of the Hotel Intercontinental Grandstands: 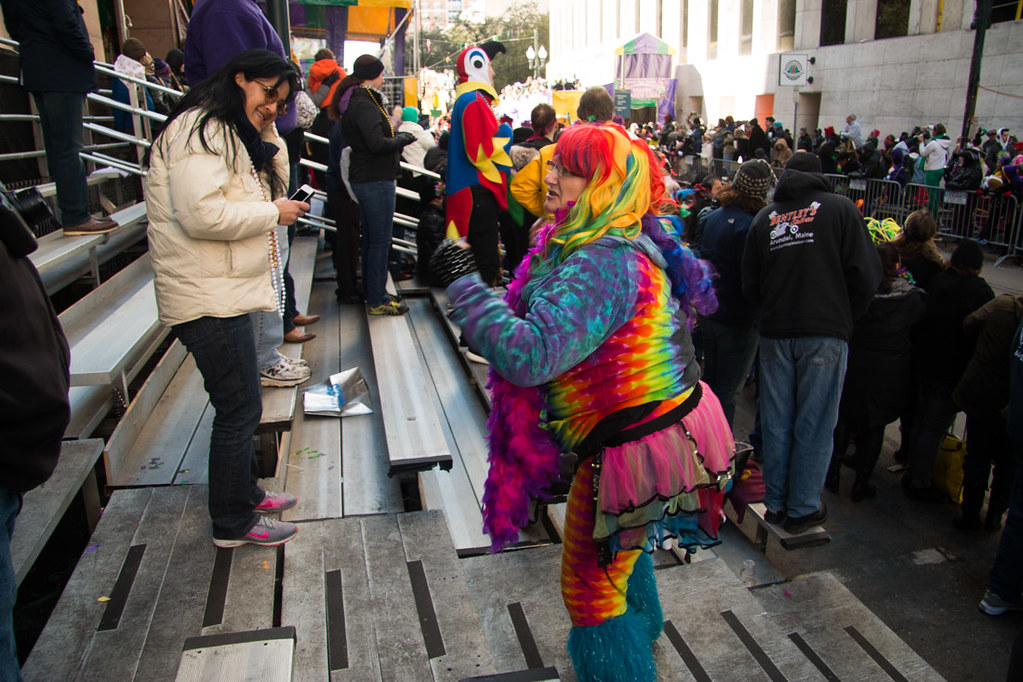 As you can probably tell, it is more crowded than the Lafayette Hotel grandstands, and they had higher grandstands too. But the REAL upside of these grandstands was having access to clean bathrooms inside the hotel and having a place to go to warm up after being outside during the cold weather and not having to worry about losing a good spot! (Hotels are completely closed to non-guests during Mardi Gras. But since we had grandstand tickets, we were given wristbands to enter the Intercontinental. There are porta-potties available for other parade goers). We also ate lunch at the Intercontinental in between the Zulu and Rex parades. That was a nice option too since so many restaurants are closed on Mardi Gras (it’s essentially a holiday in New Orleans).

We were a few rows up, but people frequently transitioned in and out of the front “standing room” only area, so we were able to go down for some front row photos pretty often. We still had a great view! 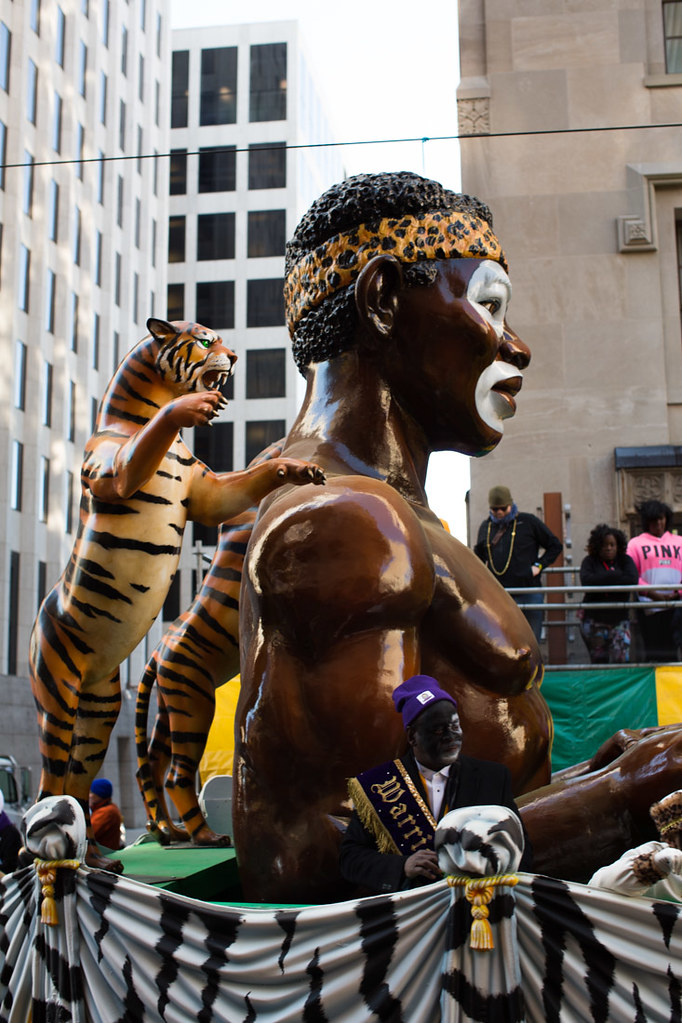 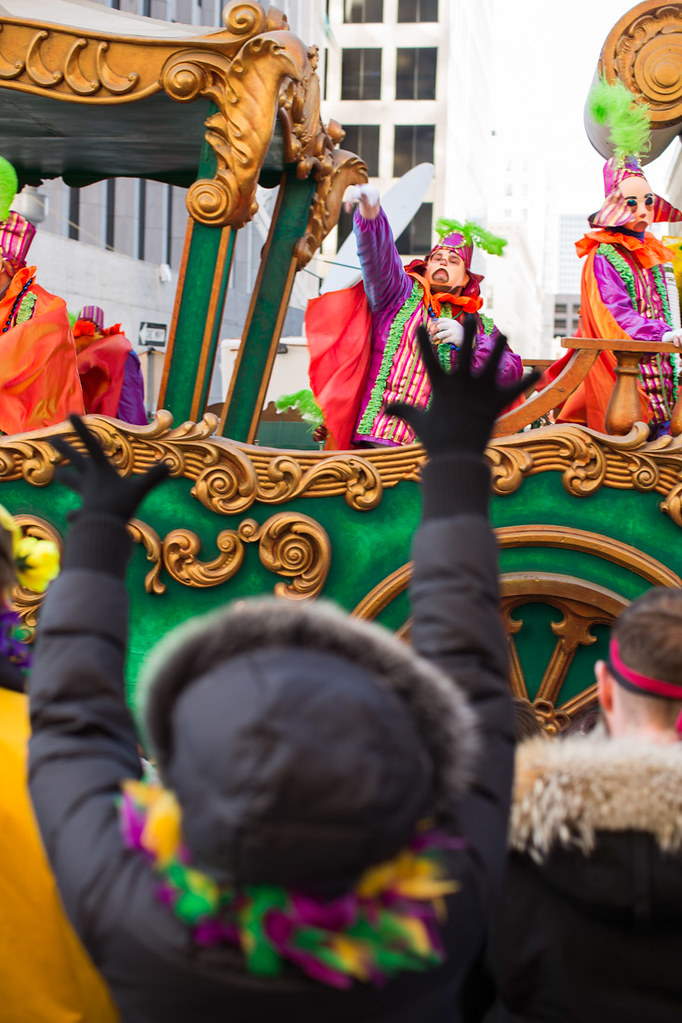 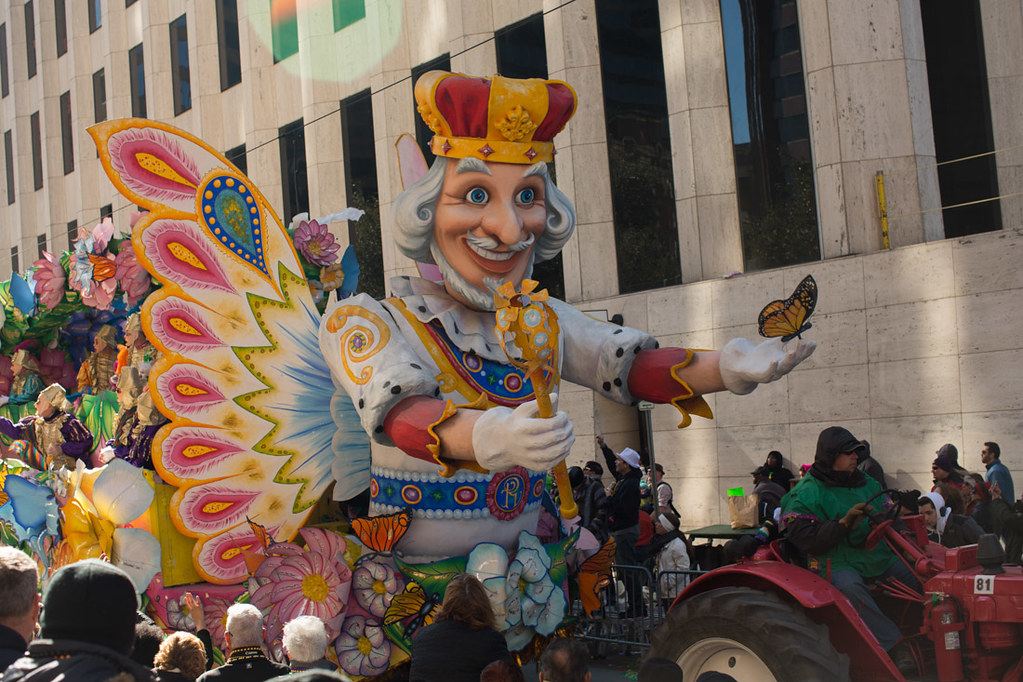 So, there you have it! Three Mardi Gras options tried and tested! Have you been to Mardi Gras? Did you opt for any grandstands? What did you think?

Ready to book your stay in New Orleans during Mardi Gras?  Check out my hotel review of where we stayed, the Roosevelt.  Want to check out other hotels?  Head over to booking.com to see their deals on hotels in New Orleans.

Our Experience Shipping Luggage Ahead

It looks like the Intercontinental stands had seating did the stands at Lafayette hotel and St Charles have seating or would you have to stand?

All the stands we selected had seating.

Hi Melissa! Great info. Is the Palace St. Charles the actual name of a hotel, office building, etc? If so, do you recall the address? We booked tickets in this grandstand as well, and want to make sure our walk there is seamless.

I’m really not sure! The map of the grandstand locations was a really small scale, so all the grandstands are very close to each other and easy to find.