Ken and I had booked a mini suite with a balcony on the Ruby Princess. This was our third cruise together. On our first cruise (a Caribbean cruise), we had a balcony. But on our second cruise (a Mediterranean cruise), we had opted for no balcony to save some money. We really regretted the decision on that cruise. So we decided that for all cruises in the future, we’d book a balcony.

This review will cover our mini suite, as well as a handicapped accessible, obstructed view outside cabin that my dad booked. My sister and her family also booked a mini suite, so no separate review is required there! My sister and I decided to book cabins nearby one another on the same deck, but on opposite sides of the ship (one on port, one on starboard). That way, regardless of the side of the ship with the best scenery, we’d have access to a balcony!

Review of Mini Suite onboard the Ruby Princess

This was the view of the room immediately upon entry. The small doorway on the left leads to the closet and the bathroom door. 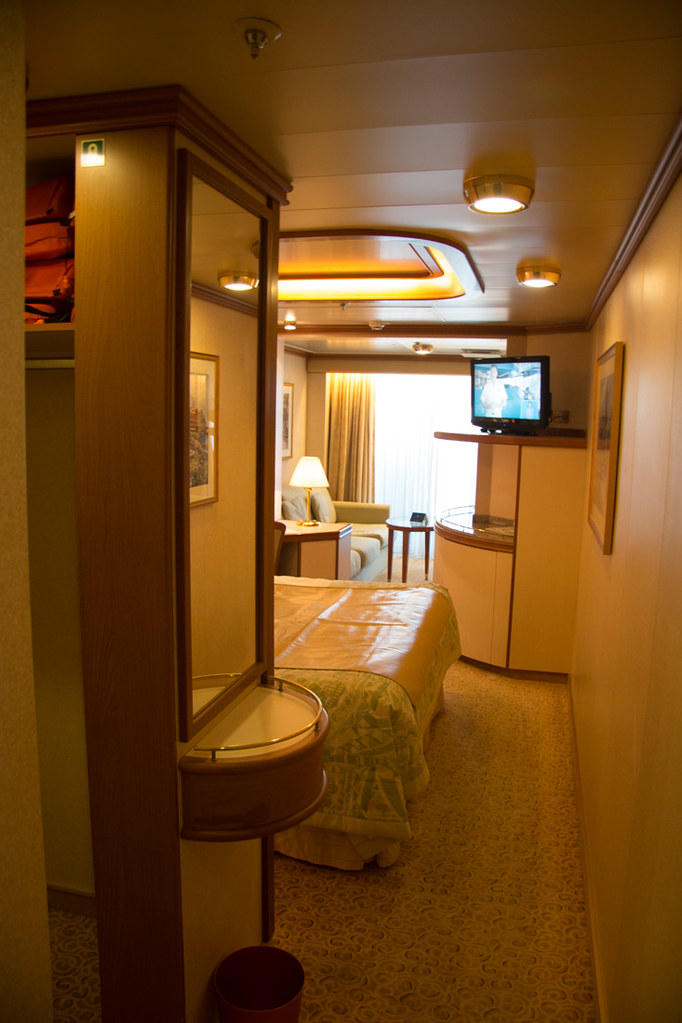 And here was the closet. There was a hanging part of the closet, as well as tons of shelving behind the mirrored doors. 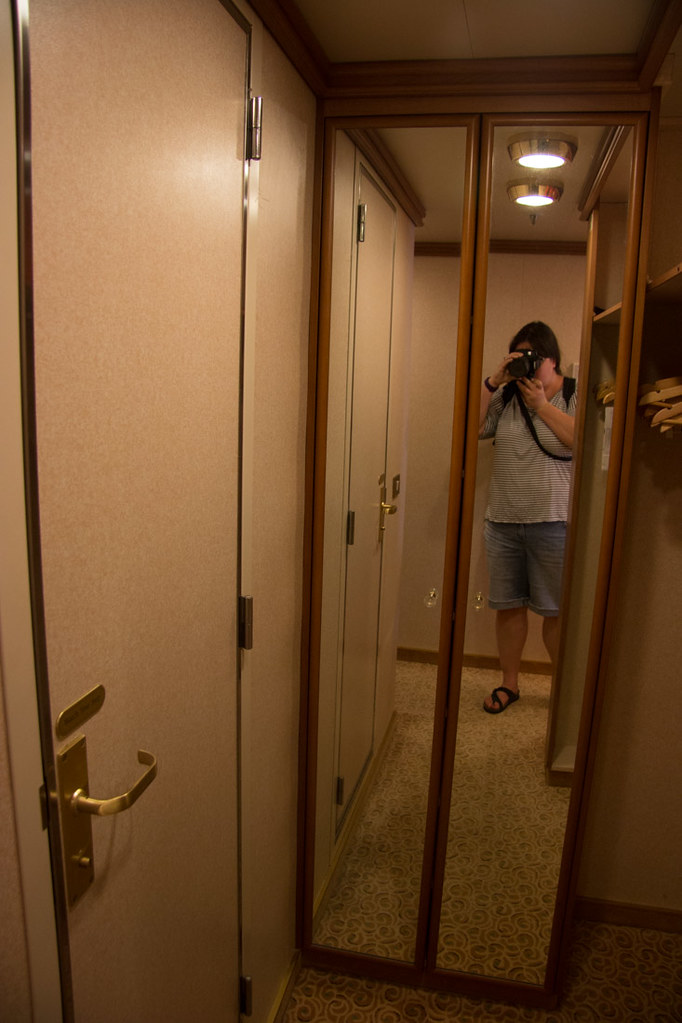 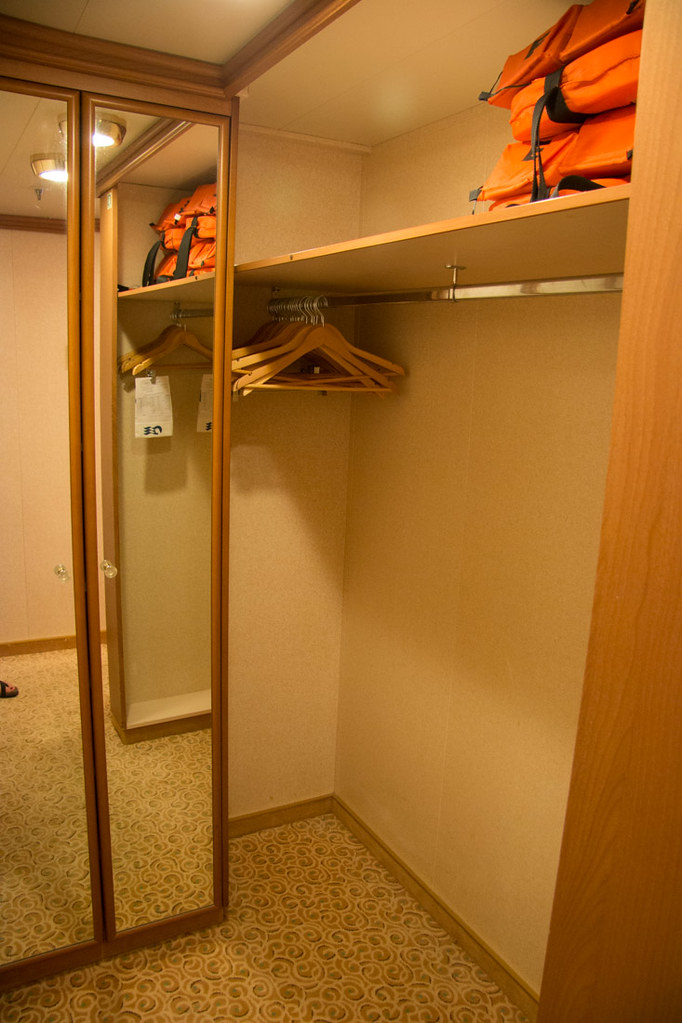 The bathroom was basic, but had plenty of countertop storage space, as well as some small shelf space too. The mini suite had a shower / tub combo. 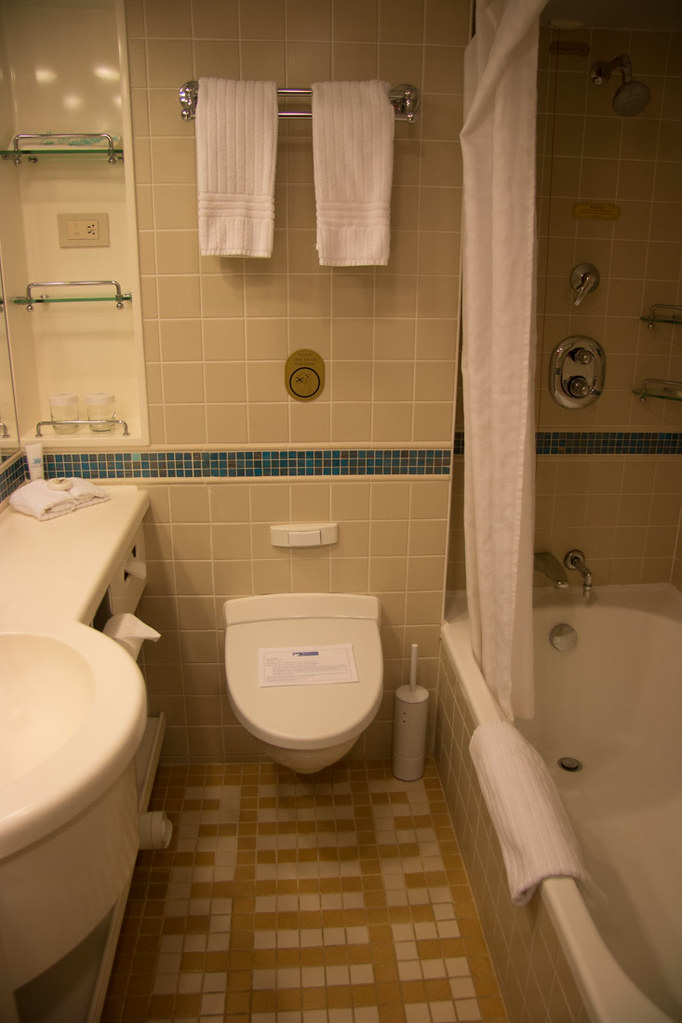 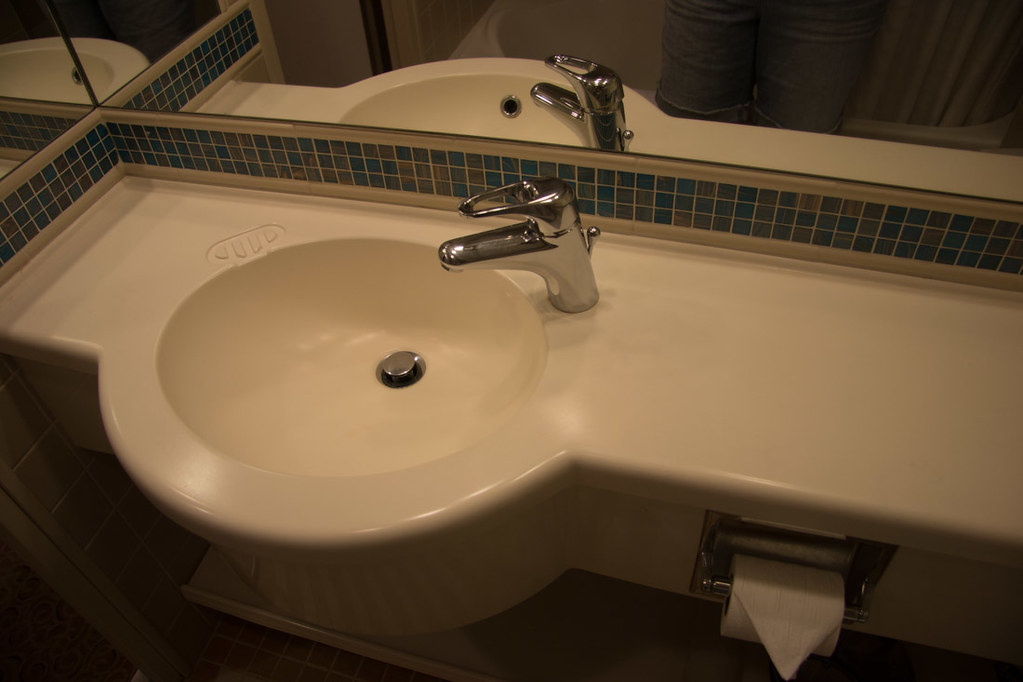 I wish there was a little more space for shampoo and soap bottles in the shower, but I feel like those tiny shelves are pretty standard in all accommodations these days. Boo. 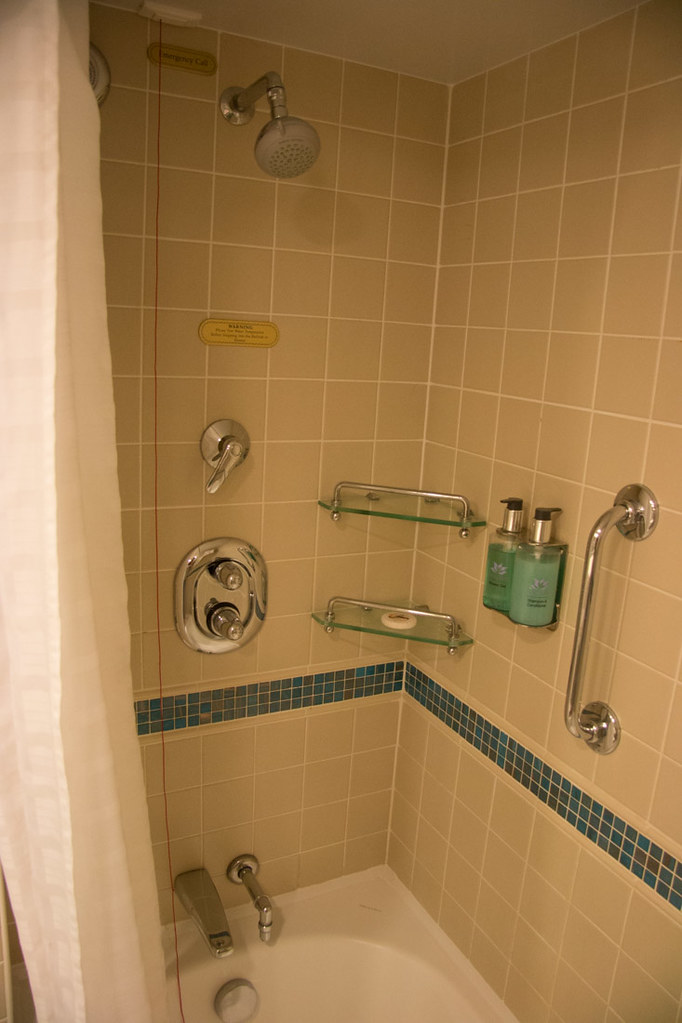 The queen size bed was comfortable, and there was a desk area right next to the bed. The desk doubled as the nightstand for the one side of the bed. 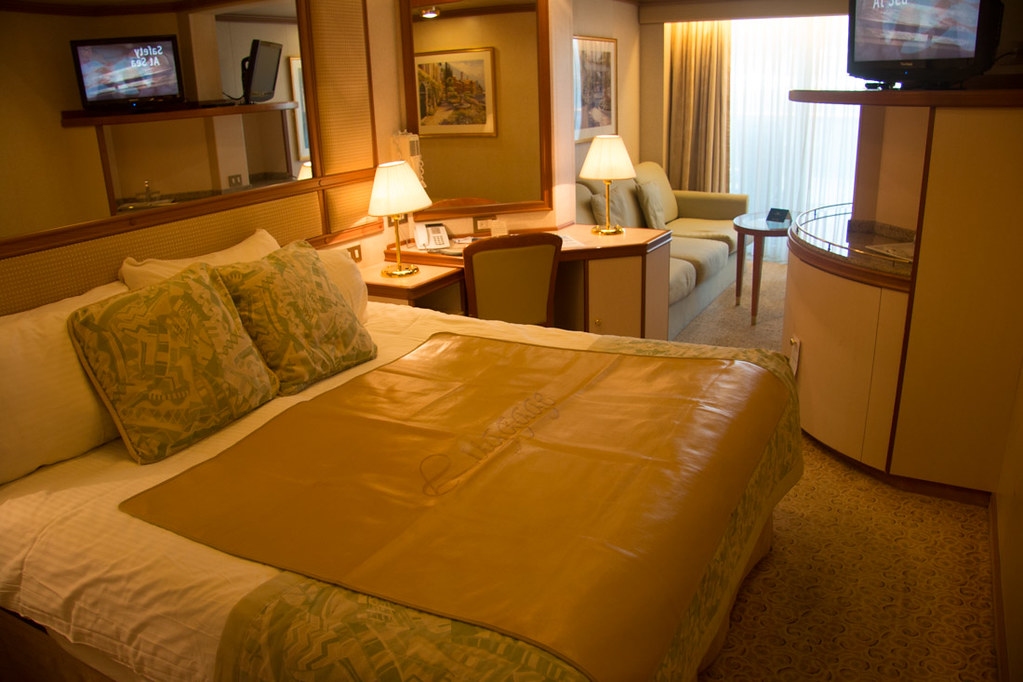 The other side of the bed had a small nightstand with two drawers. 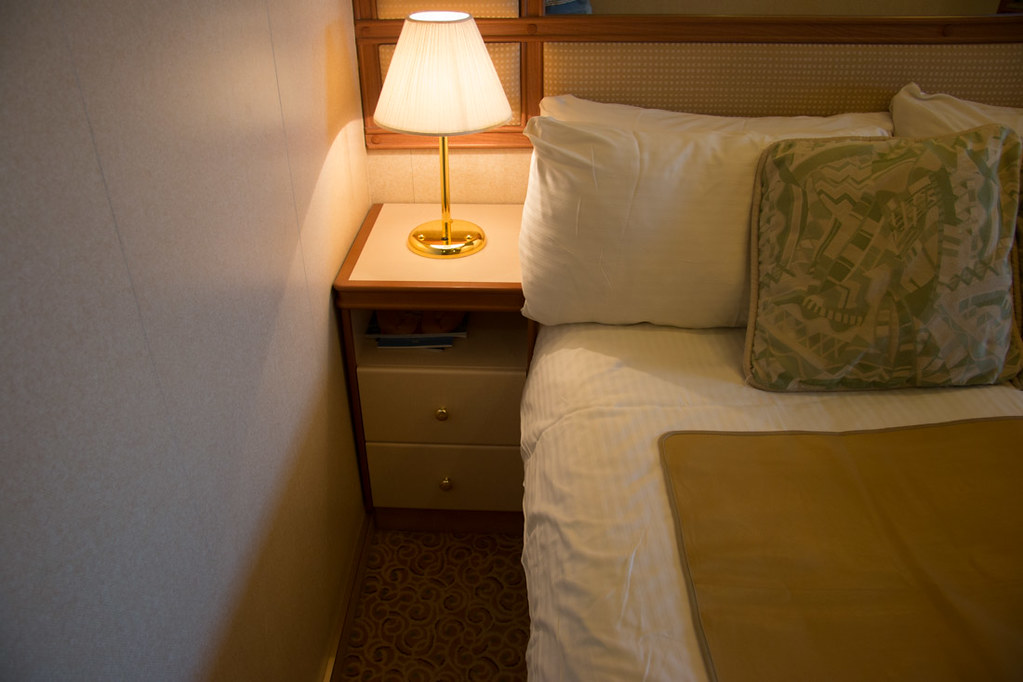 The “seating area” also had plenty of storage, along with a small couch, a sitting chair, and a small coffee table. 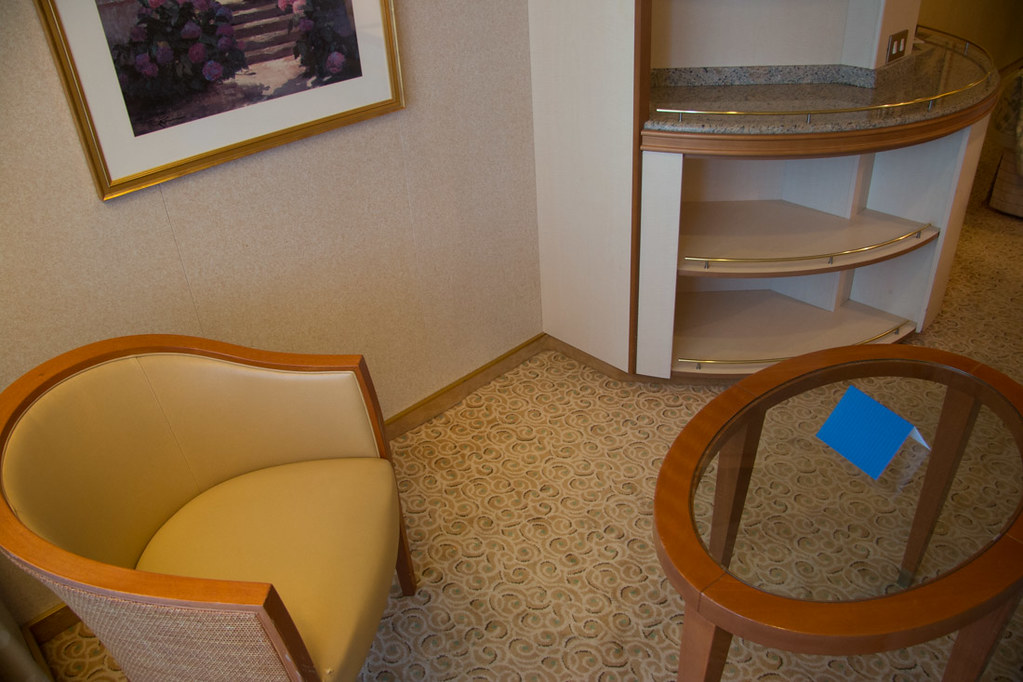 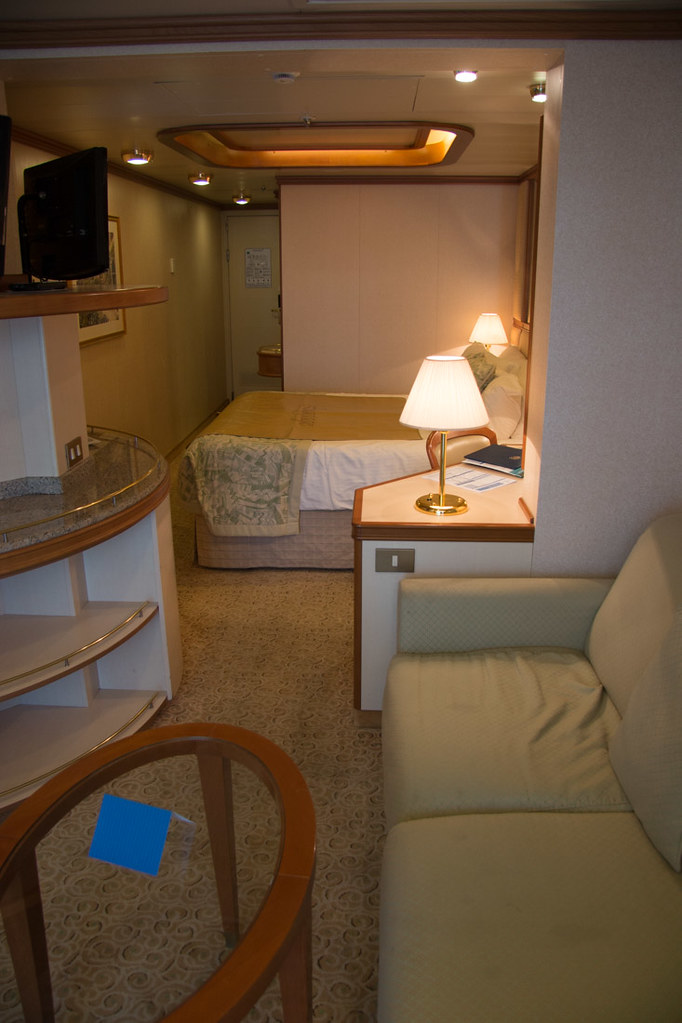 The storage area was great for things like charging our cameras and cell phones, and we kept things like bottled water and sodas on the lower shelves (that we had brought with us onboard the ship). 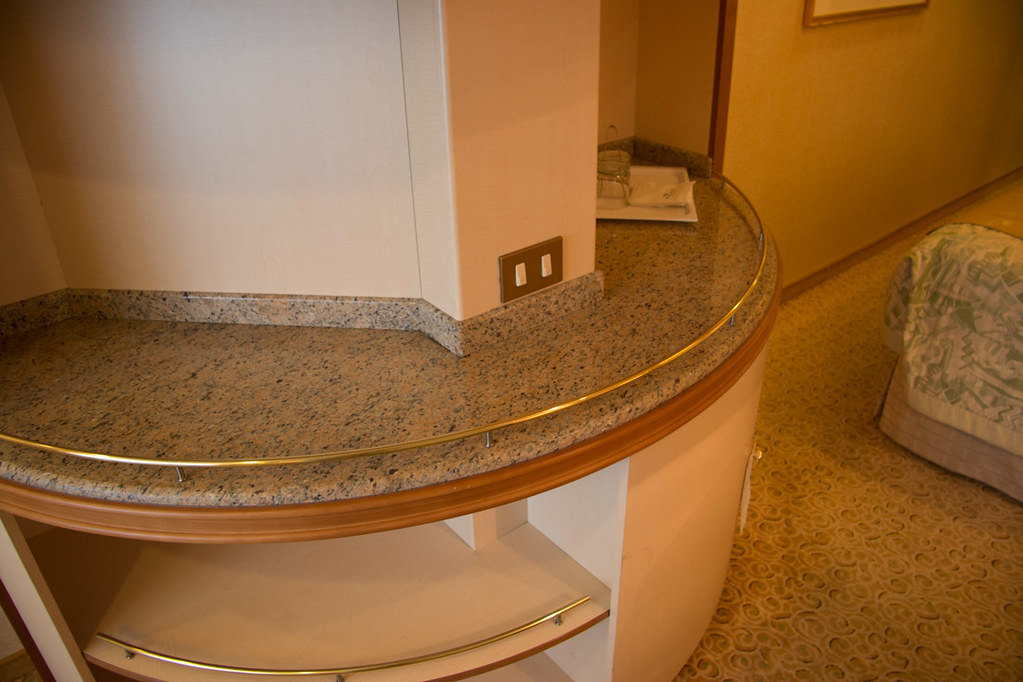 And, of course, the balcony! There were two small chairs and a small table on the balcony. 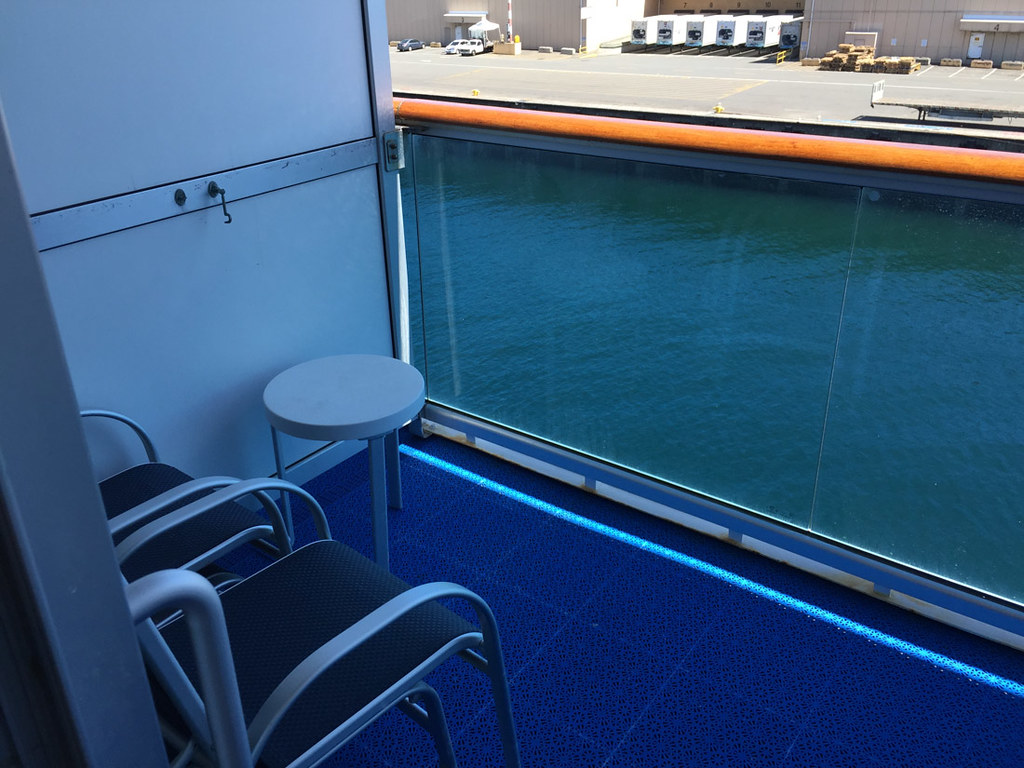 It’s worth noting that we were on the Emerald deck. Not all ship cabin balconies have fully covered “roofs.” We definitely wanted to be on a deck where our balcony was fully covered, to shield us from the rainy Alaska weather as much as possible. We were really lucky and only had one day of rain, but I’d still recommend the fully covered balconies.

Here are a few other miscellanous photos of the cabin, just from other angles. 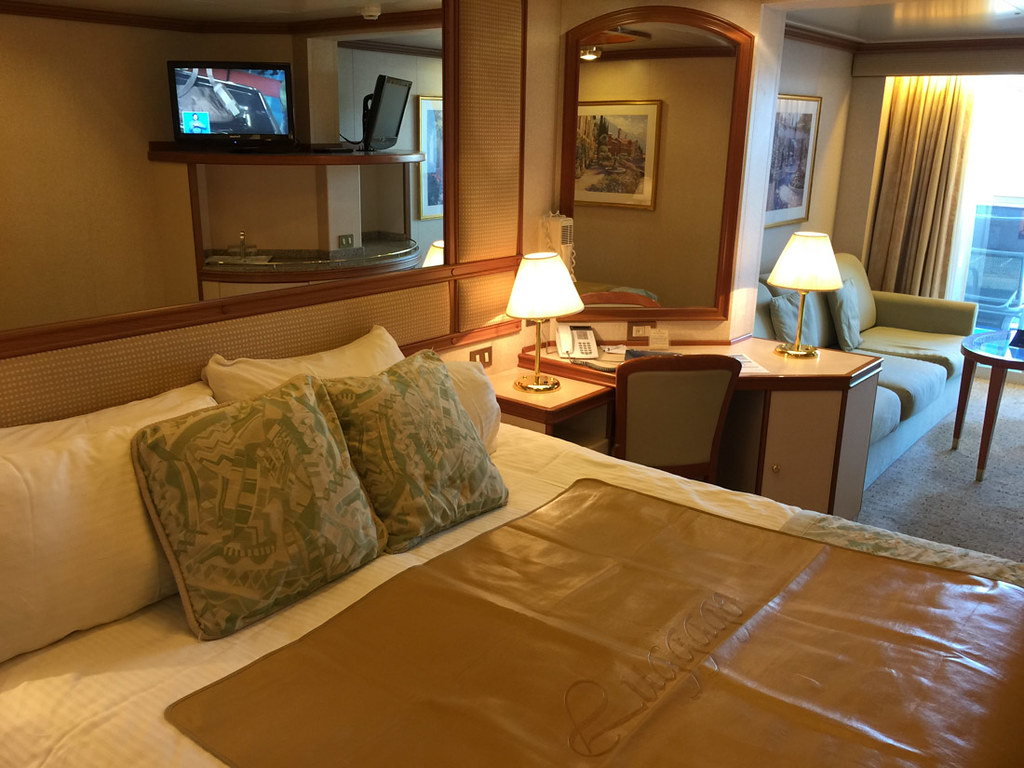 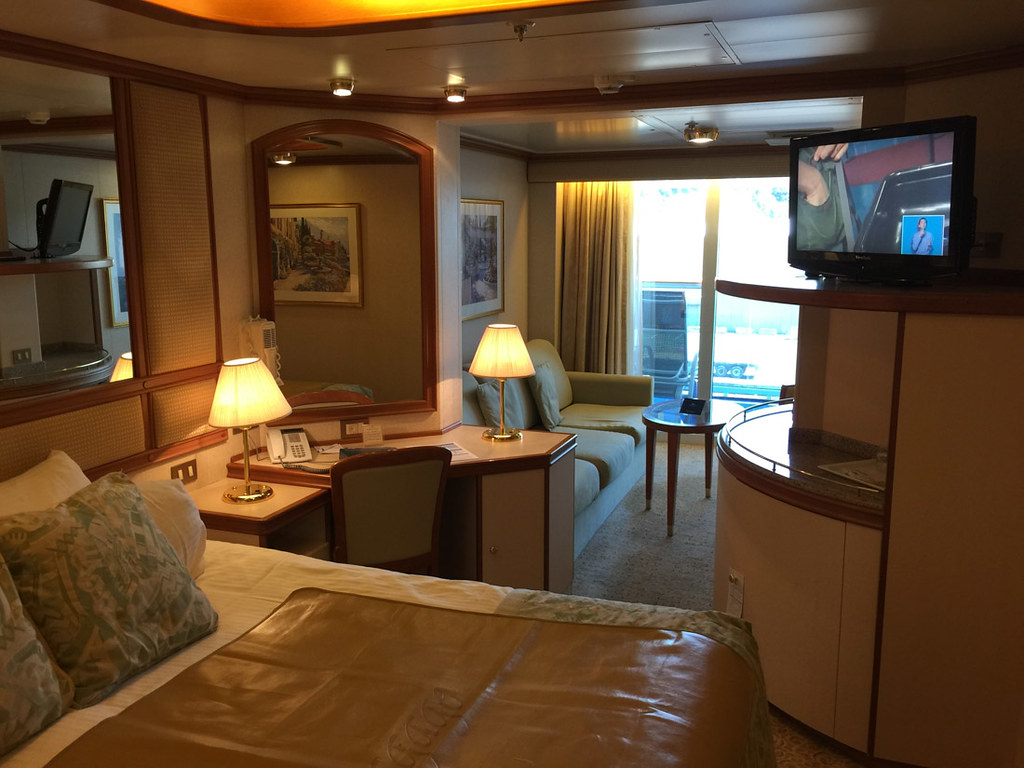 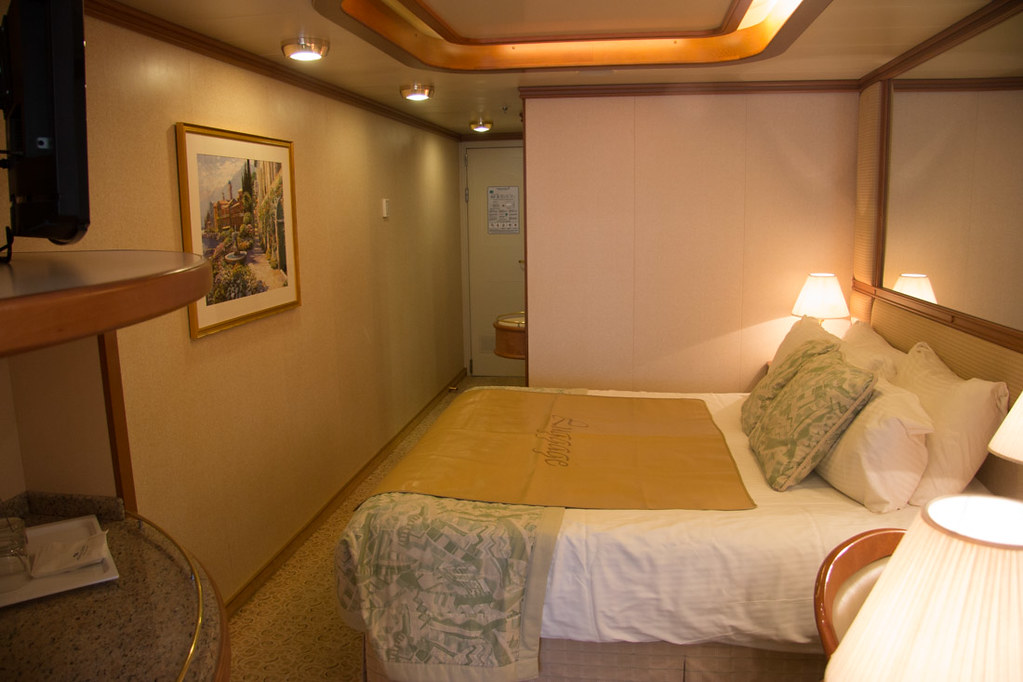 My dad was going on this cruise, and since he has some pretty extensive mobility problems these days, we booked him an accessible room. It had large open floor space in between the furniture, a no-threshold shower, and plenty of grab bars in the shower and next to the toilet. 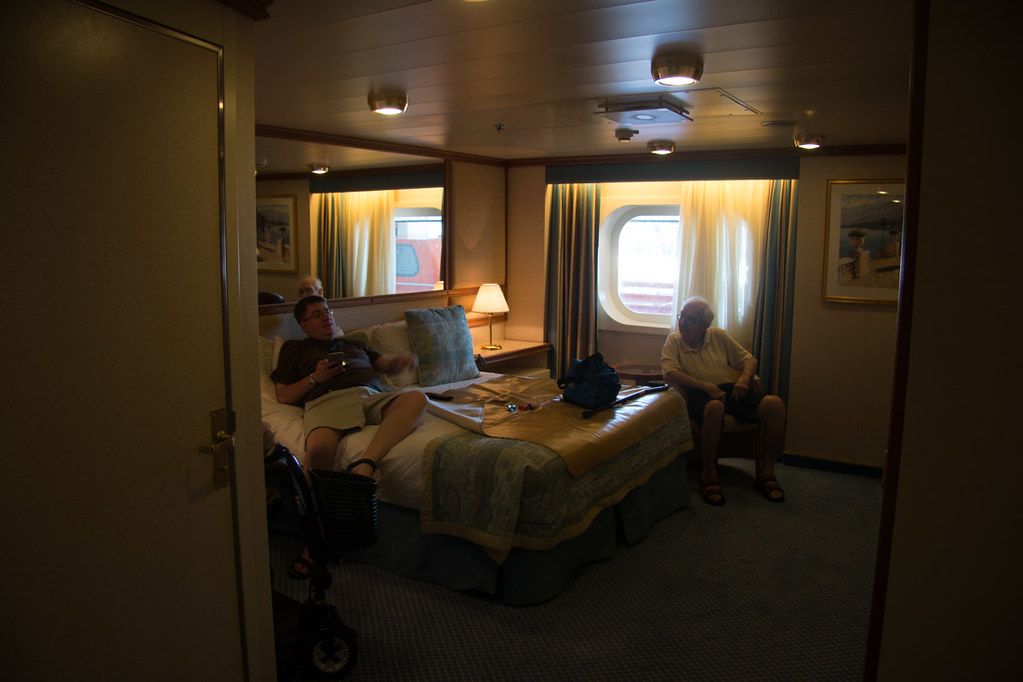 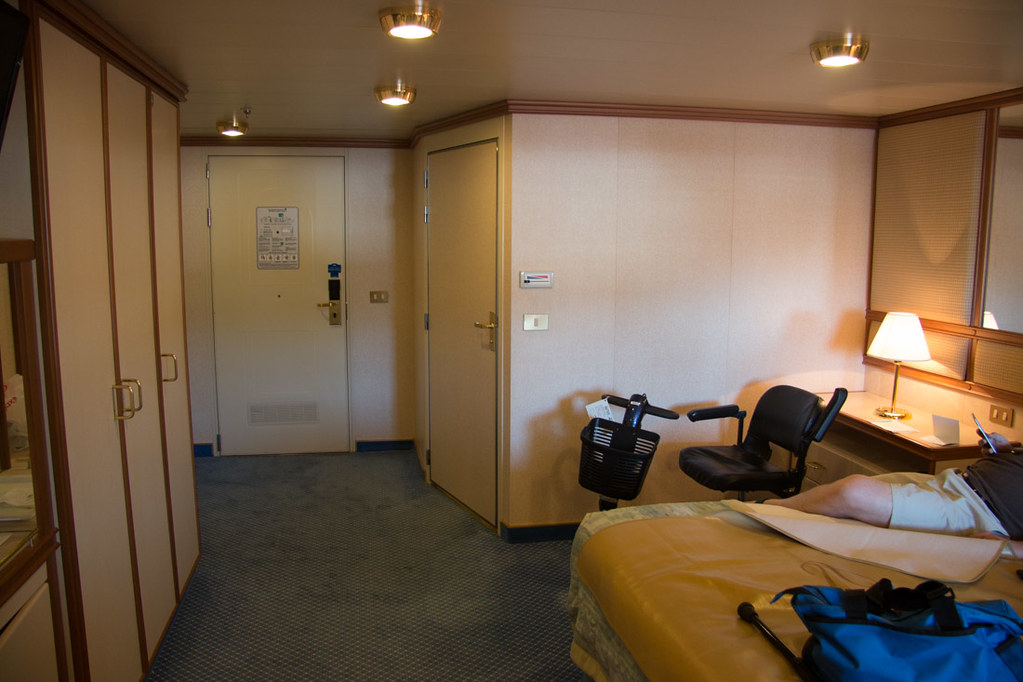 There was plenty of room for the motorized scooter that we rented for the duration of the cruise. 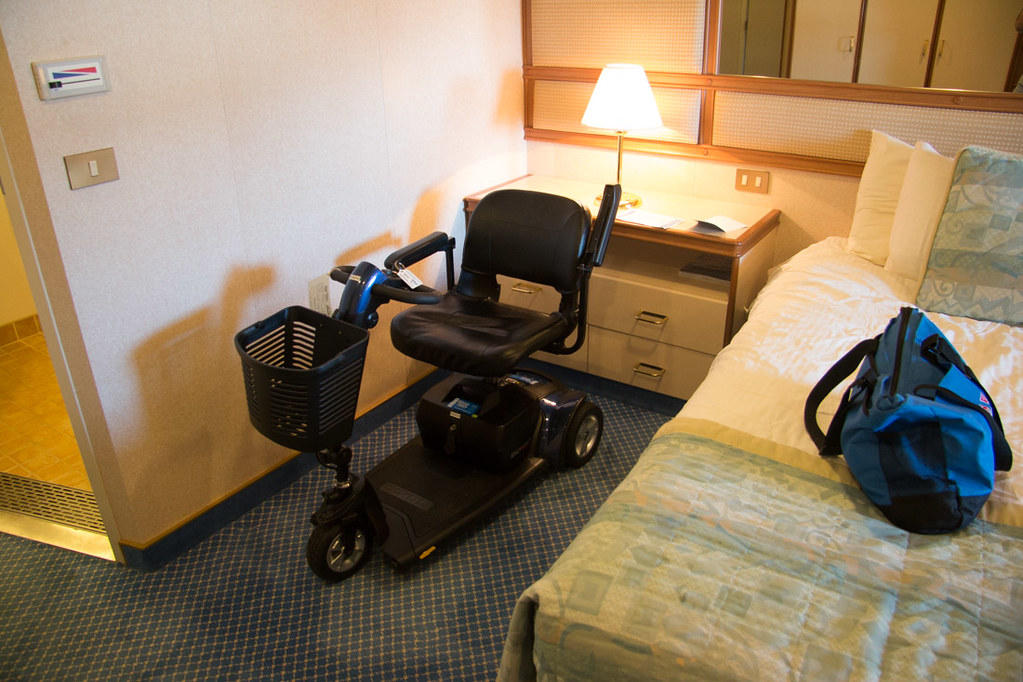 The storage was low to the ground, with the exception of the safe that was higher up in the closet. Luckily my dad can still stand up and everything just fine, it’s just something to keep in mind if traveling with somebody who can’t stand at all. 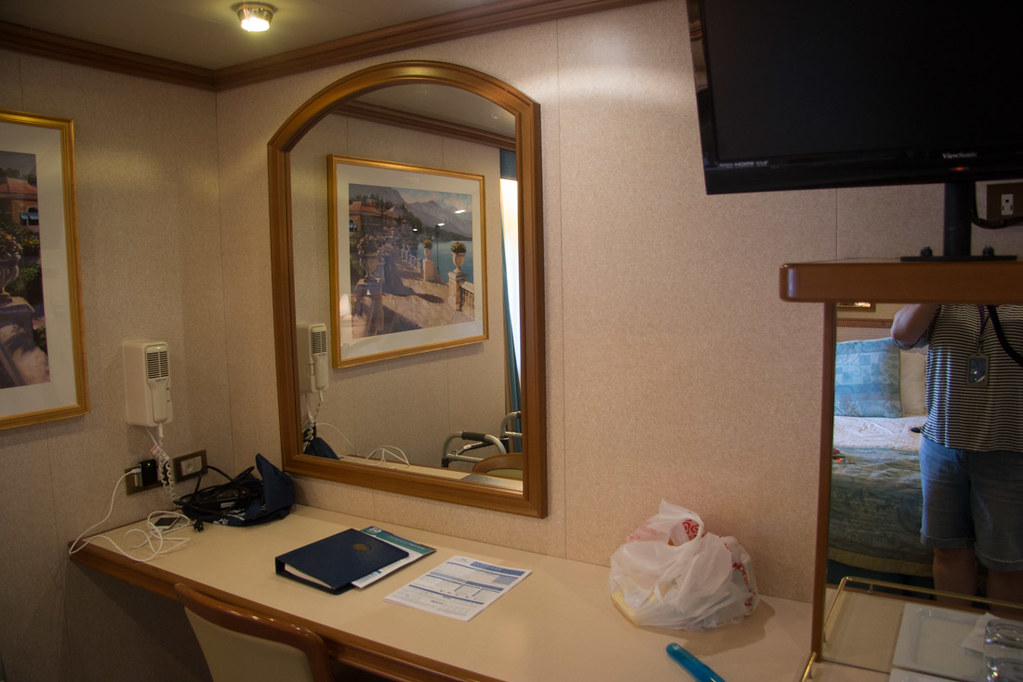 The bathroom was fantastically spacious and easy for my dad to get around in. 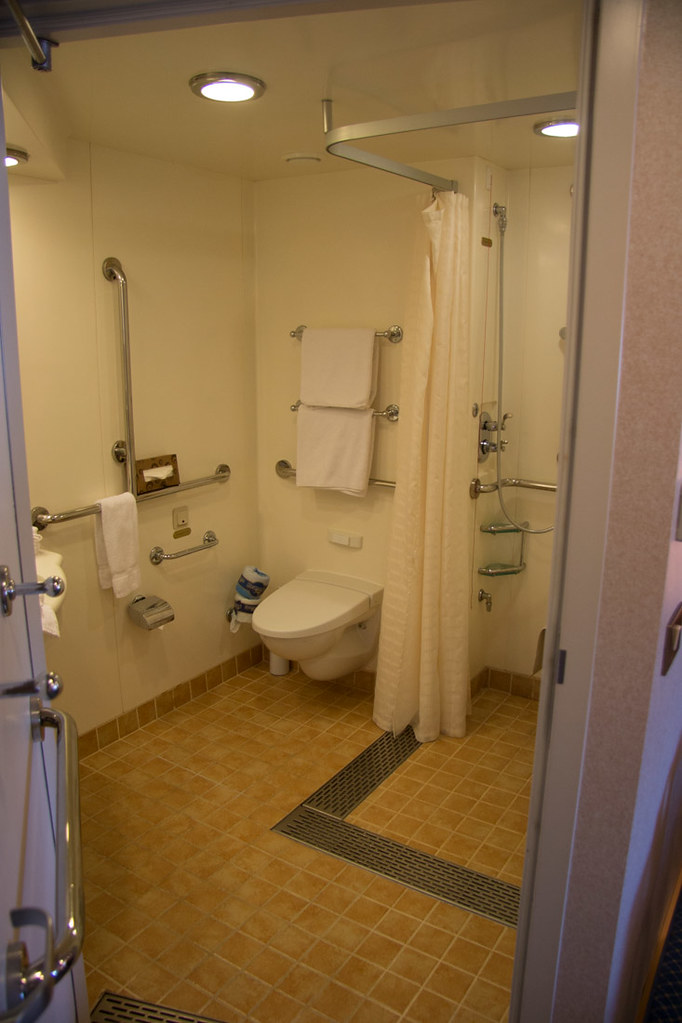 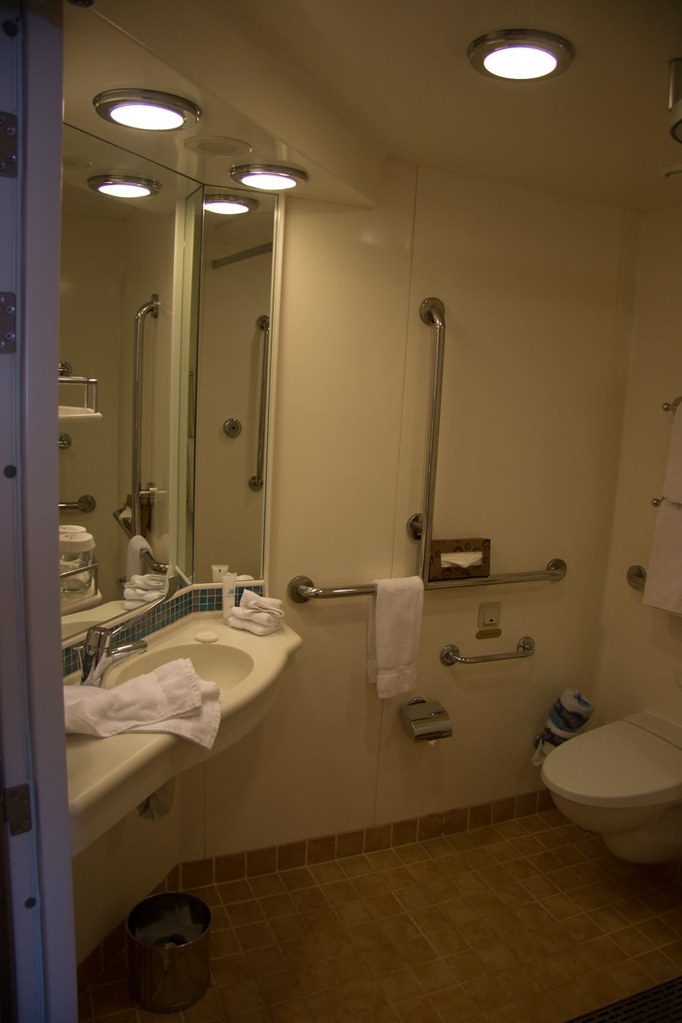 Like I mentioned, there were plenty of grab bars in the shower, as well as a good size bench for him to sit on. (Which was good for the two fairly rough seas days we encountered). 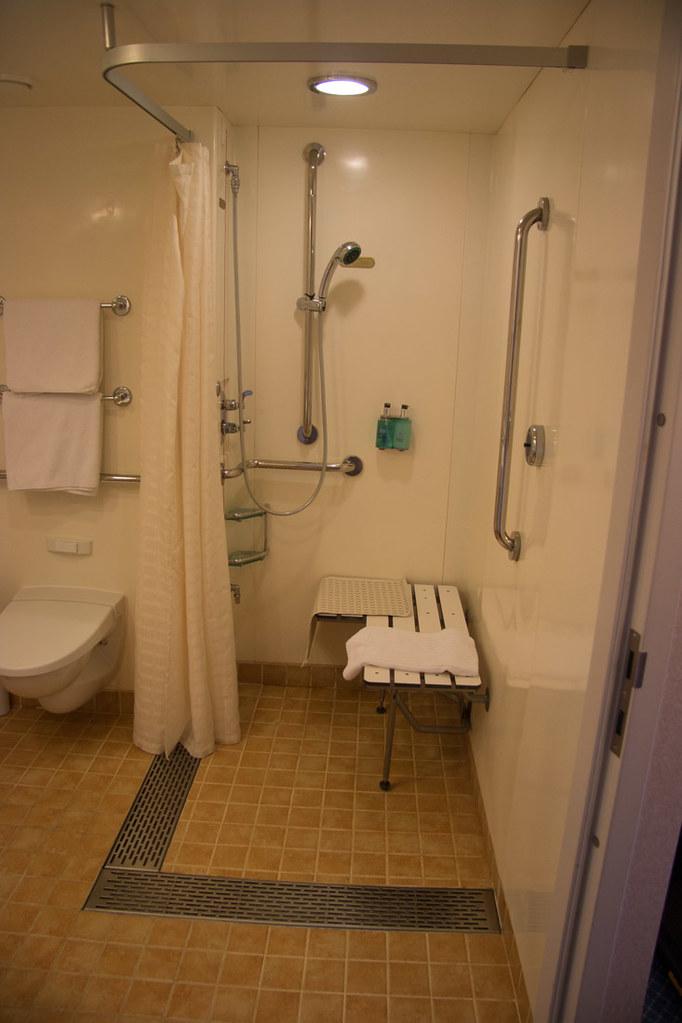 I also liked that there was a “help” button next to the toilet. 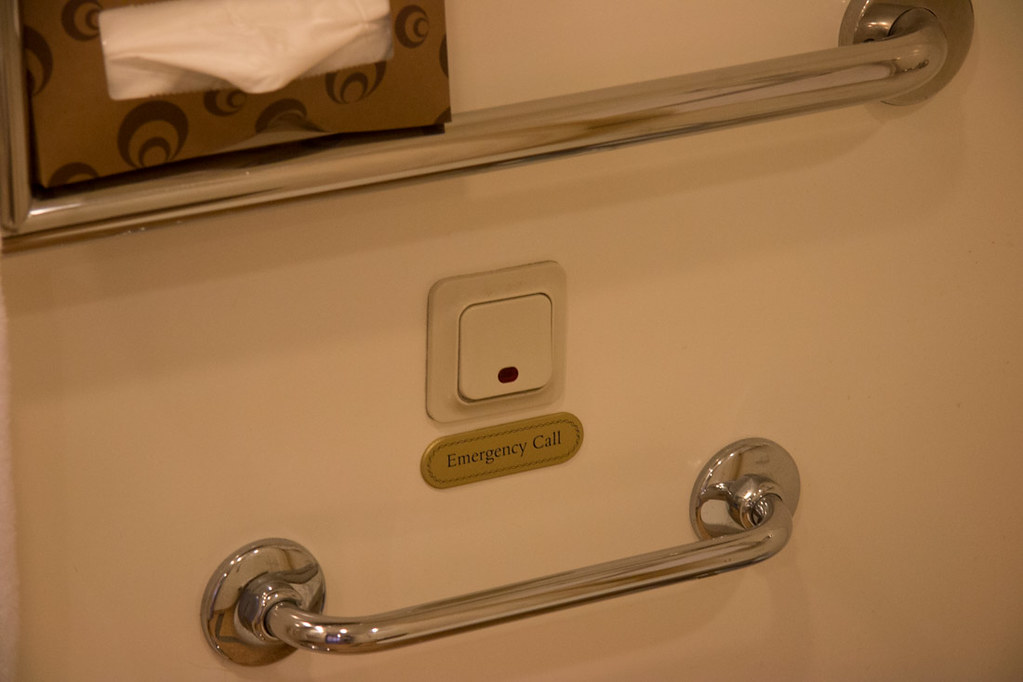 Although it’s not the best picture, hopefully this gives an idea of the “obstructed view.” Basically right outside the window is a deck walking area (in other words, the window port hole is not directly on the side of the ship). There was also a lifeboat right outside the railing of the walking area. But, at least you get sunlight in your cabin! It was only a few dollars more than an inside cabin. 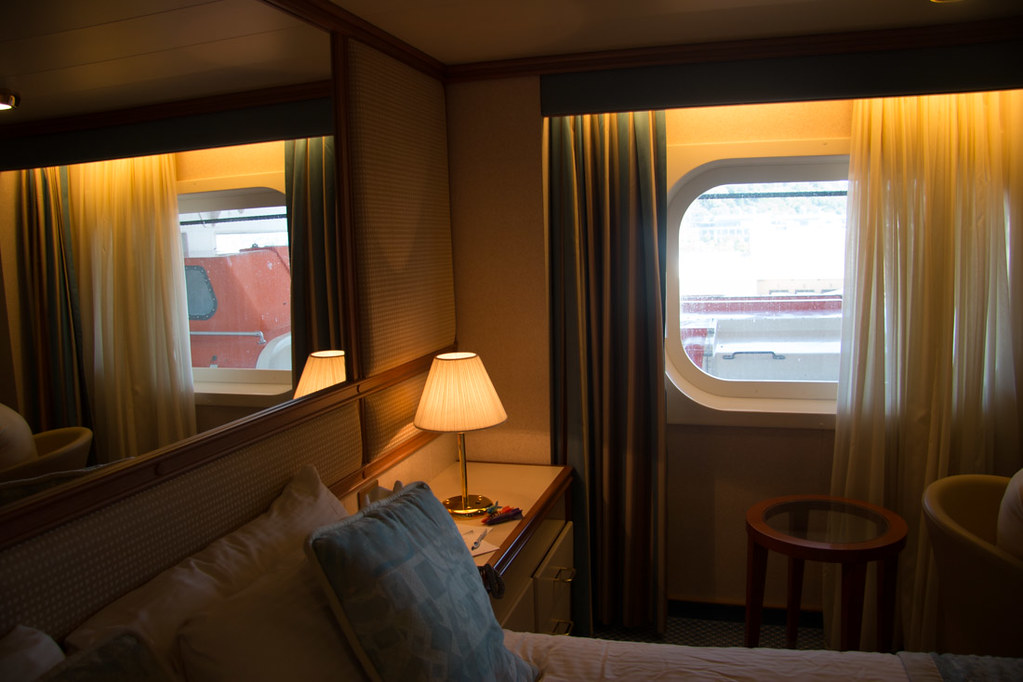 The only real complaint about the room was that the door to the room was incredibly heavy, just like all the other cabin doors. That made it really difficult for my dad to open the door, which opened inward toward the room, and maneuver his way out the door on his scooter. It would have been really nice to have a button that would automatically open the door for a few seconds to give him a chance to get out the door without having to try and open it.

One other minor complaint. Like most cruise ships, the cabin/stateroom hallways and corridors are very narrow. And throughout most of the day, cabin stewards keep cleaning carts along the walls of the corridors as they clean the cabins in the morning and do things like turn down the beds in the evening. When these cleaning carts were in the hallway, which was much of the waking hours, my dad had an incredibly difficult time moving around the hallways. Luckily my dad’s room was right by the elevators, but sometimes it was more convenient to use another elevator bank, or if he was coming to our cabin or my sister’s cabin.

Anyway, I don’t think that is specific to Princess cruise lines, and it’s definitely nothing I had noticed on previous cruises, but that was only because I was never traveling with somebody who had mobility problems before.

In the next post in this series, I’ll cover a review of the ship and the ship amenities, like the pools, restaurants, and bars!