After our first night of sleep in Sochi, we were feeling so much more refreshed. In fact, since we didn’t get to sleep until nearly 2AM the night before thanks to how late the Women’s Halfpipe went, we slept in until about 11AM on our second day in Sochi! I’m sure persistent jetlag wasn’t helping matters either!

We had tickets for the Luge Team Relay competition on this evening. After we showered and got ready for the day, we had some lunch at the ship’s buffet. Then we headed to the Olympic Park area. We stopped by a mini convenience store type of place and purchased some snacks and drinks to keep in our cabin for the rest of our stay in Sochi. We found this interesting snack! Red Caviar flavored Lays potato chips! Yum? 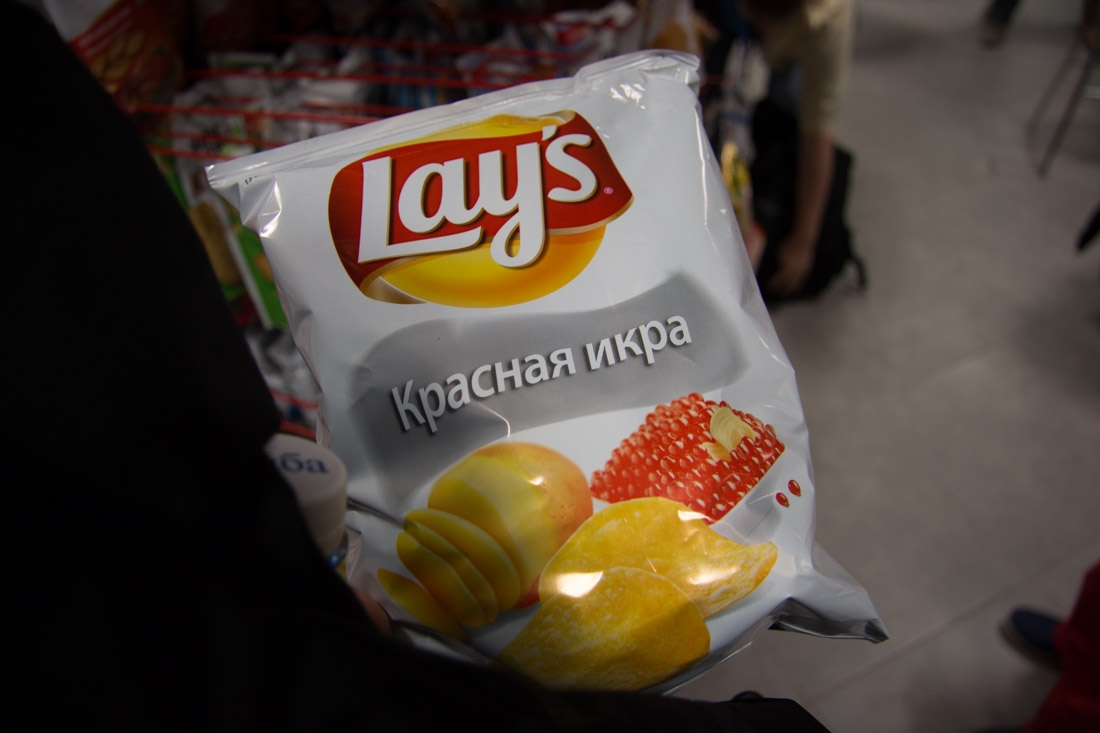 We meandered around the area for a bit, but we didn’t actually go into Olympic Park, because somehow the day was escaping us, and fast! I guess sleeping until 11AM will do that to two weary travelers!

It was 60 degrees in the coastal area of Sochi that day. Back in DC, the entire city was shut down due snow. We didn’t even need our coats walking around the coast.

We headed back to the ship and got our cold weather gear together which we would definitely need for the mountains though!

Like the day before, we took the train to the Krasnaya Polyana train station, which served as the primary transportation hub for all of the mountain events. The trains were free of charge during the Olympics, and they looked brand new. 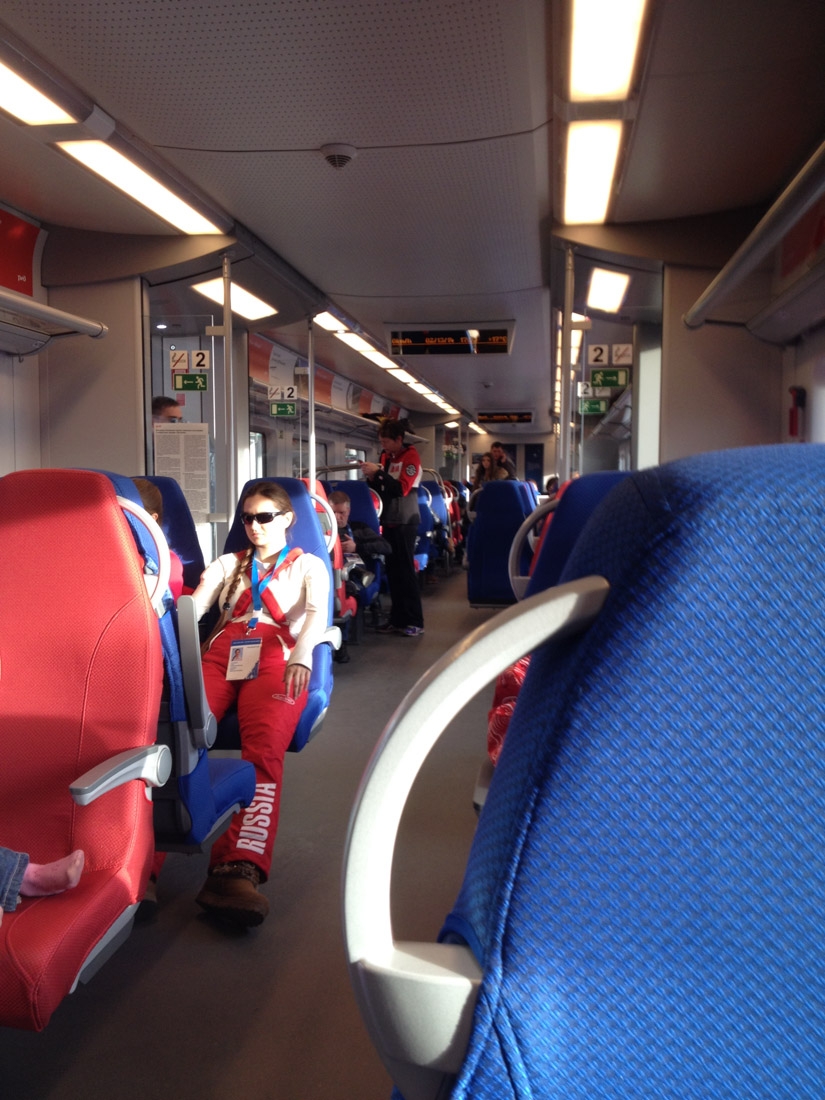 The only problem was that they were SO slow, especially going up the mountain. I had read online that there was a certain section that was only one track, so trains had to stop and wait for the trains going in the other direction to pass. It was nearly a one hour train ride from Olympic Park to Krasnaya Polyana.

So, I forgot to mention this in my post about the previous day, when we took the same train to go the Women’s Halfpipe competition. So, I’ll tell the story here, but it happened on our first day in Sochi, not our second.

Much of the train seats are groups of six. Three seats that face another three seats. Ken and I sat in a grouping that had three other Russian kids, probably college aged. We heard them speaking Russian to one another. Then out of the blue, this happened:

Russian College Kid: Excuse me, are you Christian?
Me: (Thinking to myself) Oh my goodness, this is never a good topic, NEVER a good topic. There is no winning answer.
Ken (while I’m thinking): Um, sure.
Russian College Kid: What kind?
Me: (Thinking to myself) What does that even MEAN? Oh my god, we’re so dead. I don’t even know what religions are acceptable here in Russia. When I traveled around other parts of the world, they could freakin stone or behead you if you were the “wrong” religion.
Ken: Lutheran. I went to a Lutheran school.
Me: (Thinking to myself) LUTHERANS. Oh god, what do Russians think of Germans these days? Do they hate them? Would they hate Lutherans because they’re associated with Germans? I’m going to throw up.  Should I chime in that I went to Catholic school?
Russian college Kid: What kind of Lutheran? More conservative or liberal?
Me: (This guy knows there are different sects of Lutherans. What the hell?  Why don’t you stop being so damn judgmental Melissa!)
Ken: Oh, the more conservative one.
Me: (Nervously) But we don’t go to church or anything. (Maybe this will help ease things over).
Russian College Kid: We (points to him and his friends) are Baptists. Do you know Baptist?
Ken: Yes, we know Baptist
Me: (Russia knows about BAPTISTS? That isn’t limited to the southern USA? Am I in some alternate dimension?)

The Russian College Kid then proceeds to pull up video footage of some church choir singing, presumably taking place at a Baptist church. I watch, and he looks at me as if I should start to sing along.

Me: (Wait, are we being witnessed to by Russian Baptists on a train? Is this real life?)

I have not been in such an awkward situation in a really long time. Shortly after that conversation, there was a train stop, and some seats opened behind the group of six we were sitting in. Ken and I politely said we were going to move back there to be able to stretch out. And with that, we said so long to the Russian Baptist College kids.

Now, in retrospect, my brain probably dramatically overreacted to that conversation. But it was my own fault for not learning more about religion and faith in Russia before we traveled there. Maybe then I would have not been so panicked. Ken was not panicked at all, so I’m glad he just handled the situation.  I will say that I did my homework when I got back to the USA, and on average, only 0.06% of Russians (about 90,000) identify themselves as Baptists, compared to the more than 23 million members in the USA.

[End story that should have been added to my Day 1 Sochi post].

After we arrived at the Krasnaya Polyana transportation hub, we walked around for a while before making our way to the gondola that would take us to the Luge venue. 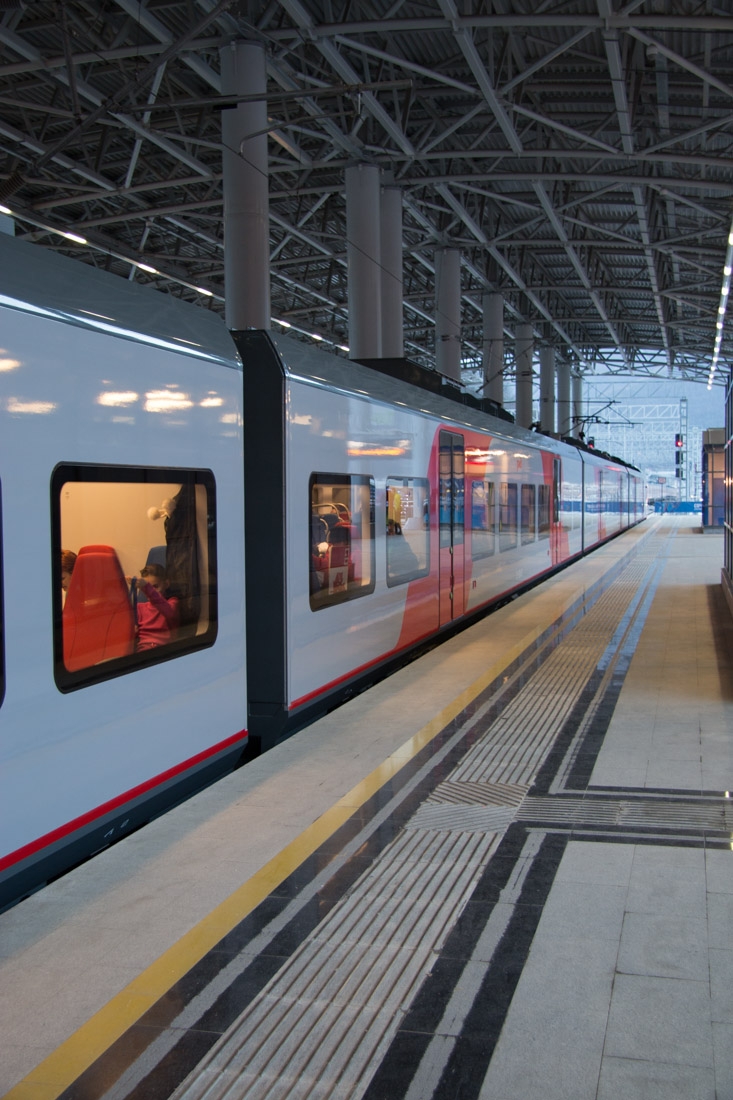 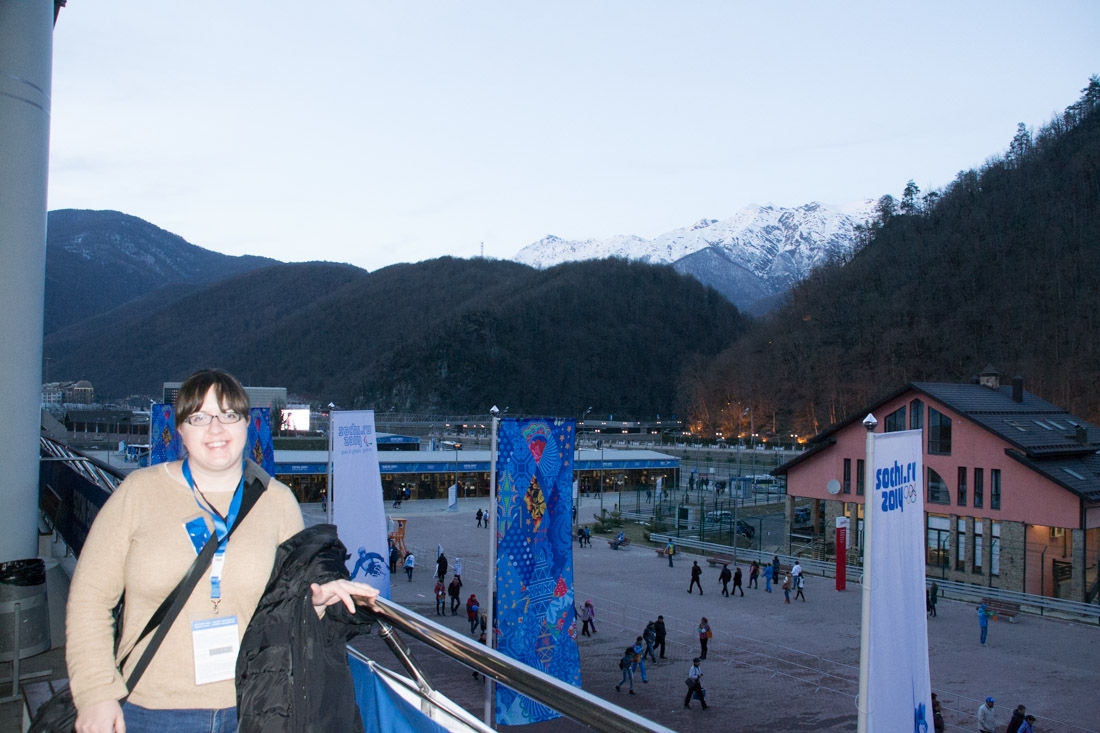 Standing on the train platform at Krasnaya Polyana with the amazing Sochi mountains in the distance.

We walked to this building, which was a kind of ski-resort type building, and served as the location for the gondola departures as well.

We were standing around outside of the building taking some photos, and a volunteer asked us if we needed help. Then he asked us if we had any Olympic pins to trade. Unfortunately Ken and I were just learning about the whole pin trading thing, so we told him we didn’t. But we had a lovely conversation. He was so excited to be a volunteer for the Olympics in his home country and he said he loved being able to meet so many new people. We told him that we had been having a great time in Russia, and just how beautiful we thought it was. It’s hard to explain, but it was just a nice, but brief, conversation. He seemed so proud and happy that we were having a good time.

Once we got in the building, I wanted to find a restroom. I found this room, which I assumed was a ladies room. When I walked in, it was filled with men. 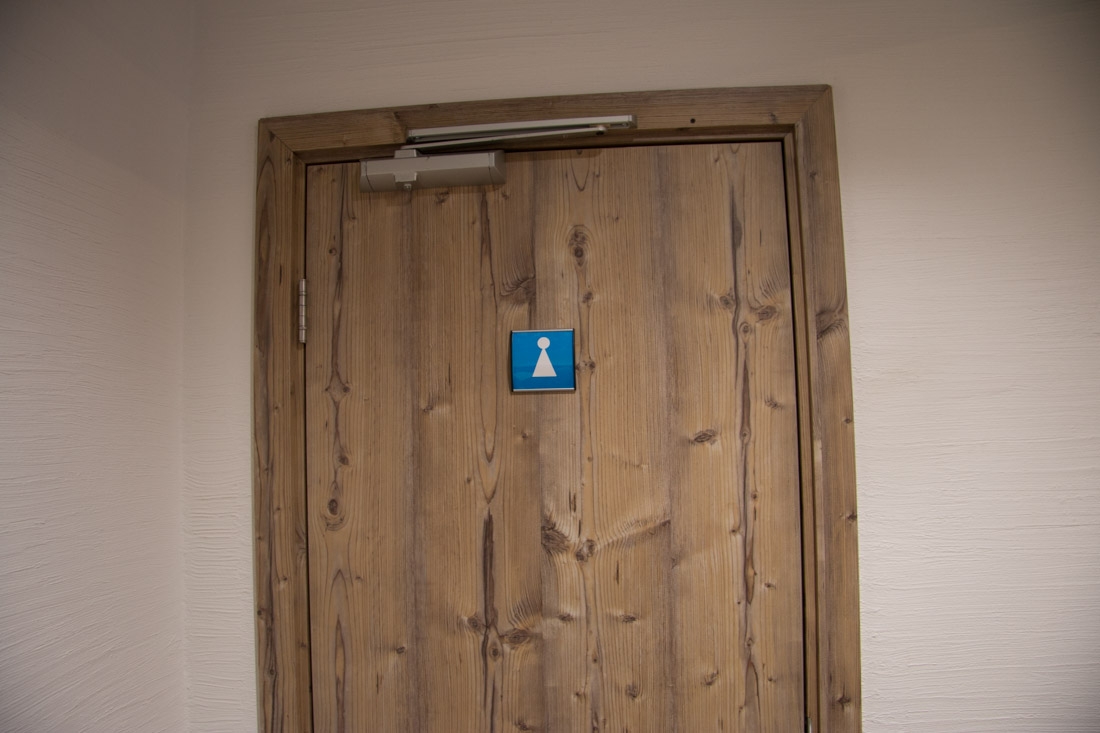 Ken went into that bathroom, and I found a door around the corner that had the exact same icon on it. I walked in. It had women in it. Whew! I still can’t figure out why the icons were the same. I speculated that maybe they were unisex bathrooms, and that there just happened to be all men in the first one I walked into. But Ken said there were urinals in that bathroom. There were no urinals in the bathroom I located around the corner.

After our adventurous bathroom break, we were ready to stand in line for the Gondola that would take us to luge. 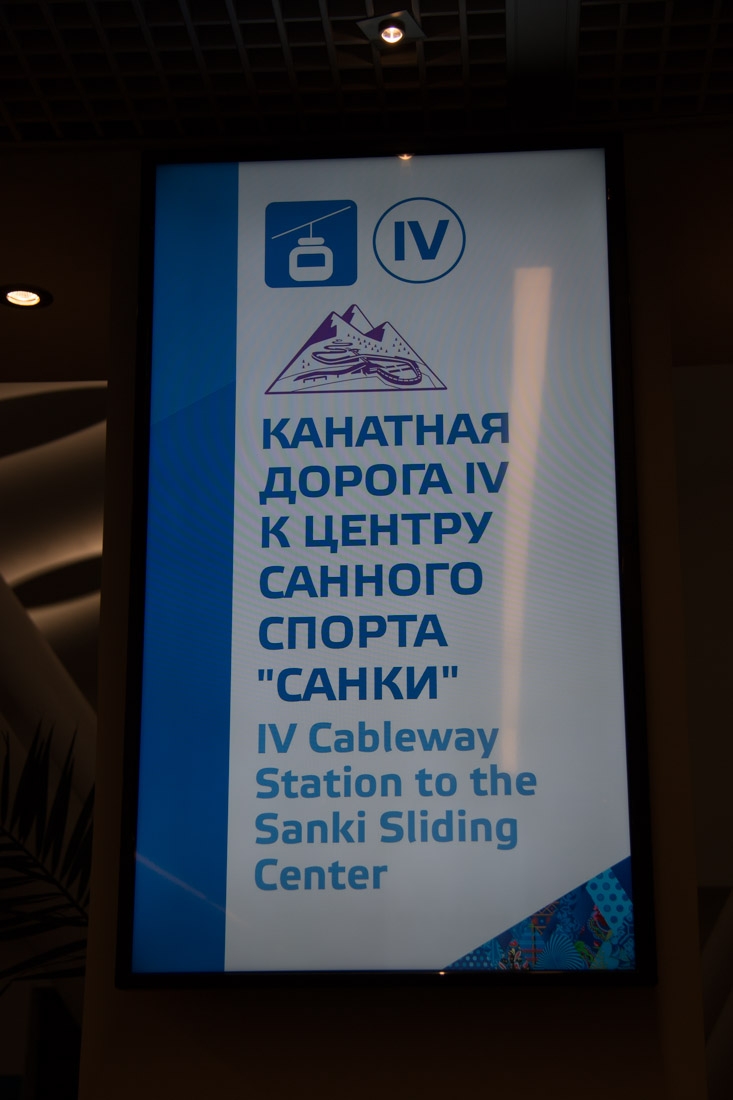 Ken and I weren’t quite prepared for how fast these things continued to move as we boarded them. We were practically knocked over! 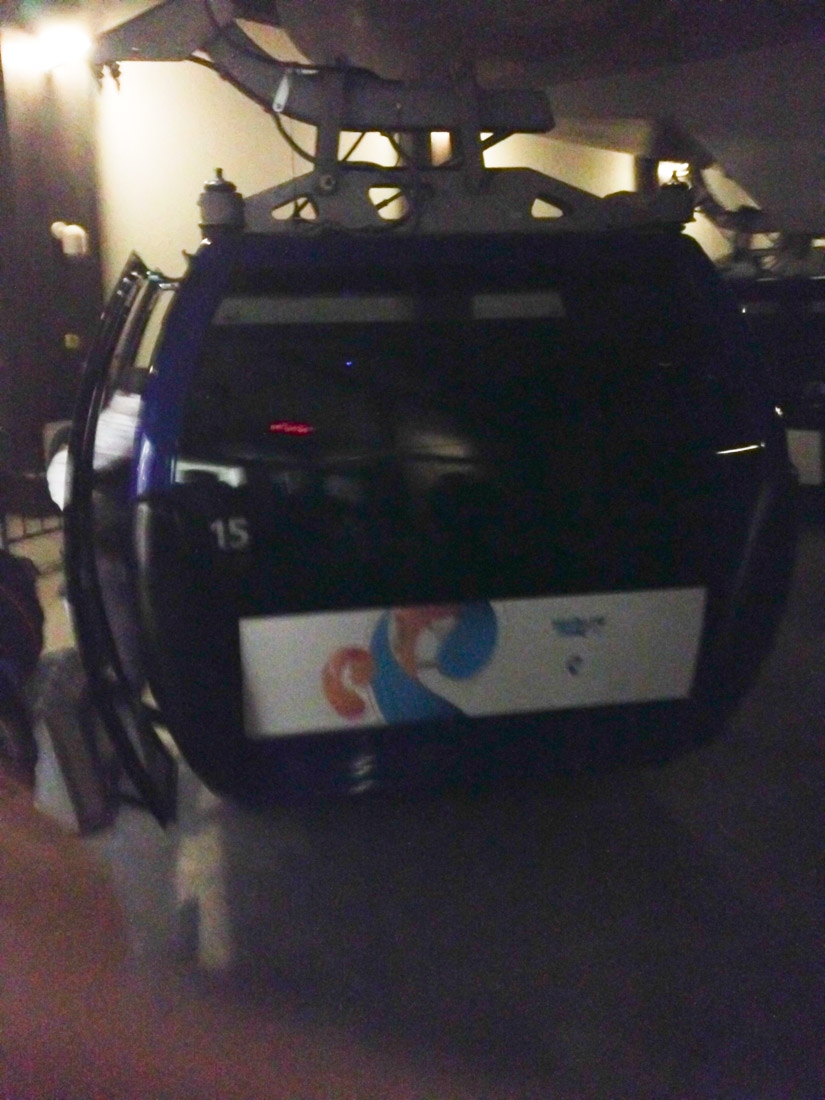 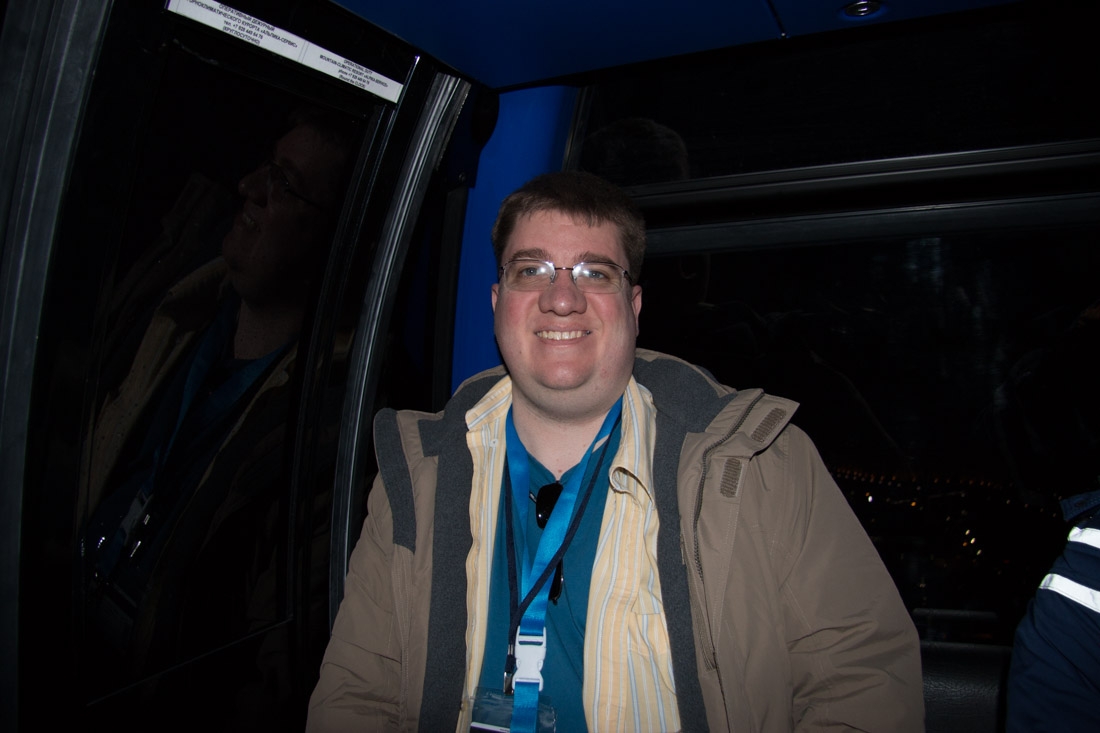 Ken in the gondola!

We got some fantastic views of the Luge venue as our cablecar/gondola approached. 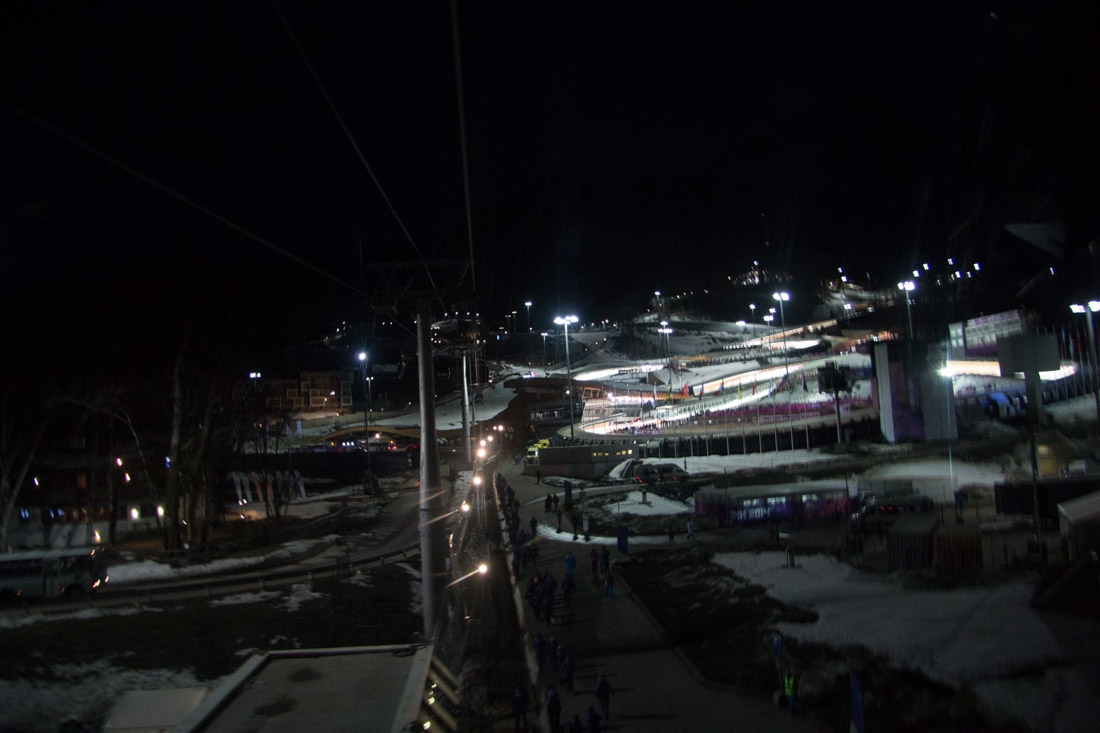 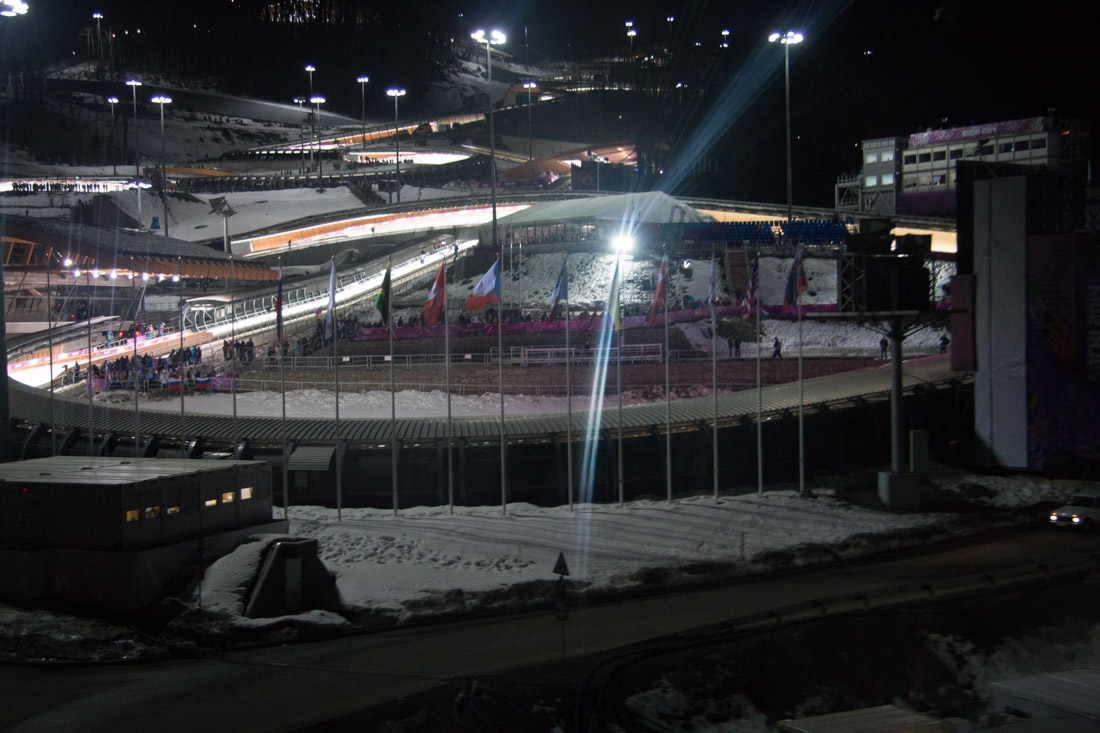 I was amazed by how close we could get to the luge track. 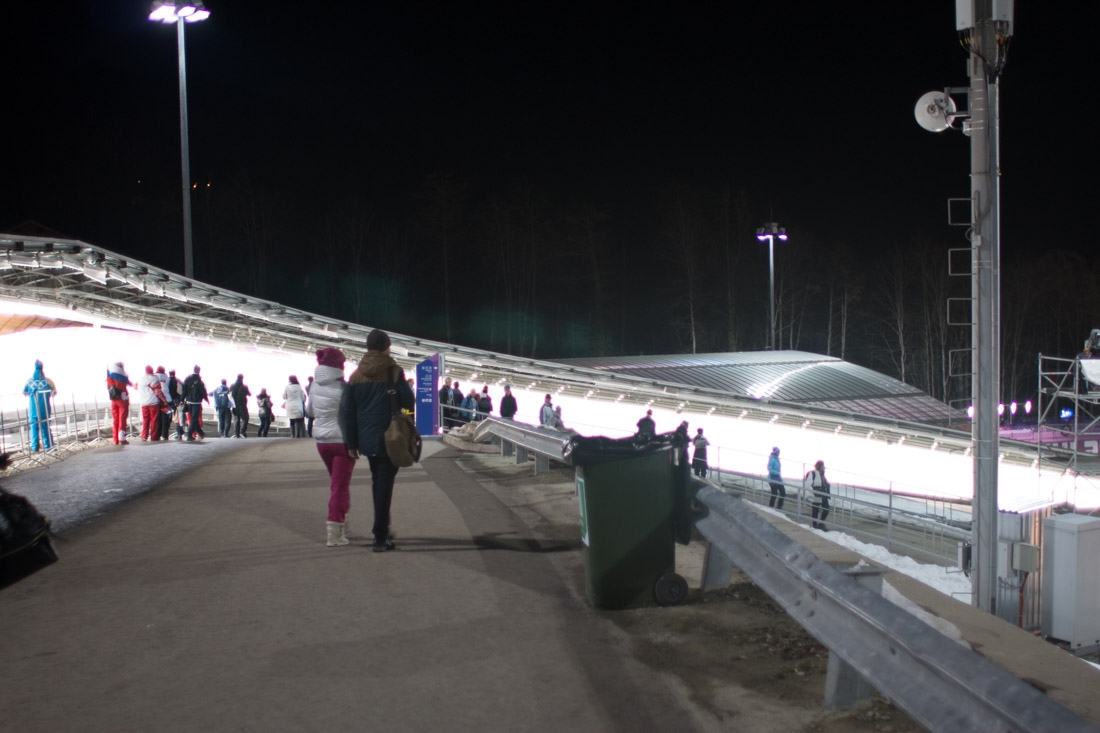 I was also fascinated by the video cameras and all the angles, and kept thinking to myself, “So that’s how they get that shot on TV!” 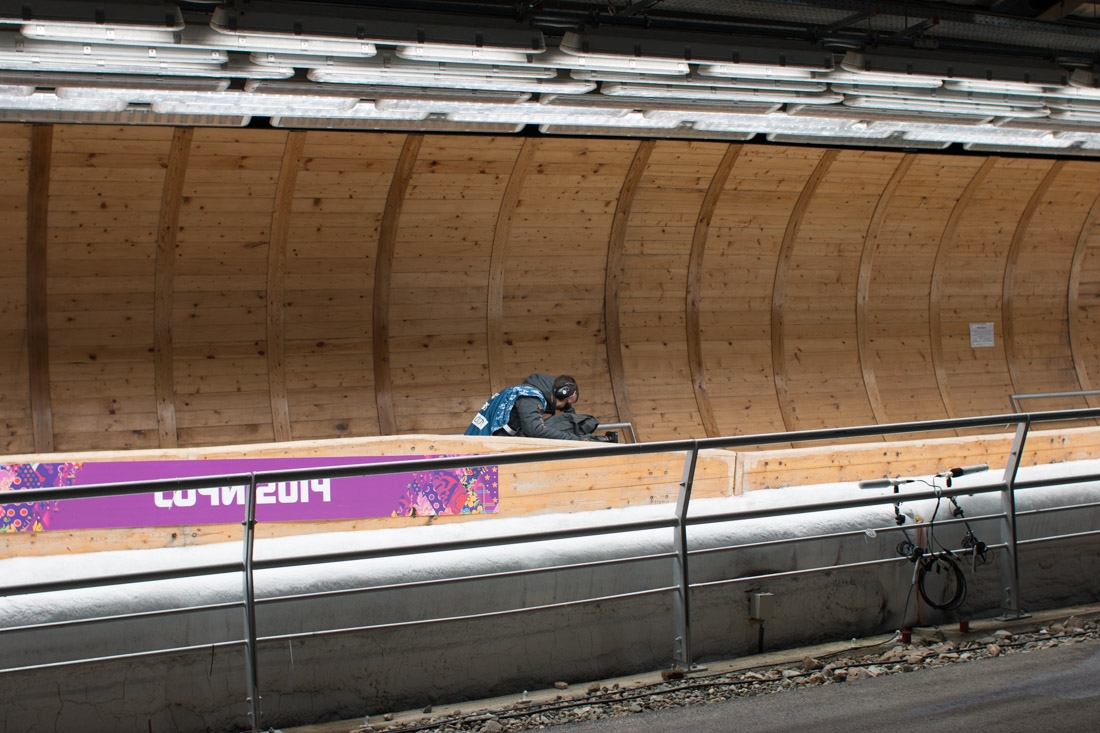 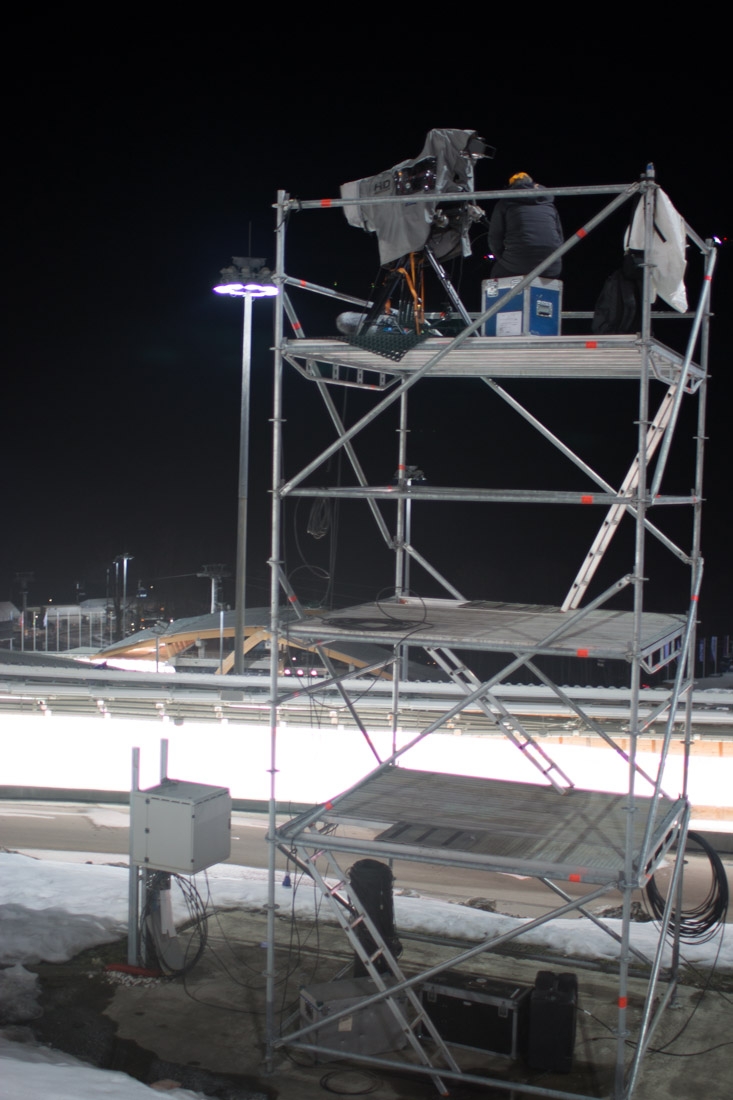 The most amazing thing, I thought, about luge was just how fast the athletes travel. I mean, I knew it was fast, but I don’t think I really appreciated it until I saw it in person. The lugers would pass us on the track in a fraction of a second. 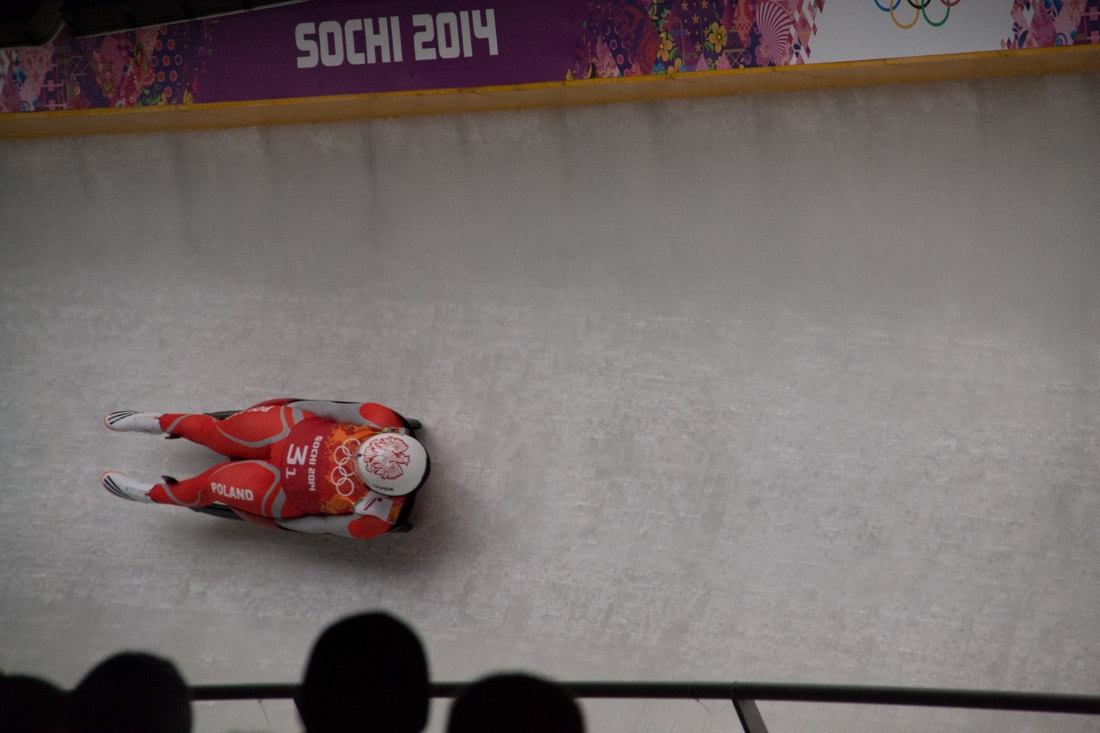 And perhaps most amazingly, you could actually “feel” them coming down the track before you ever actually saw them. There would be a vibration in the air and on the track. Then before you know it, blink, and they were gone. We had our camera on burst mode to capture some really fast shots. 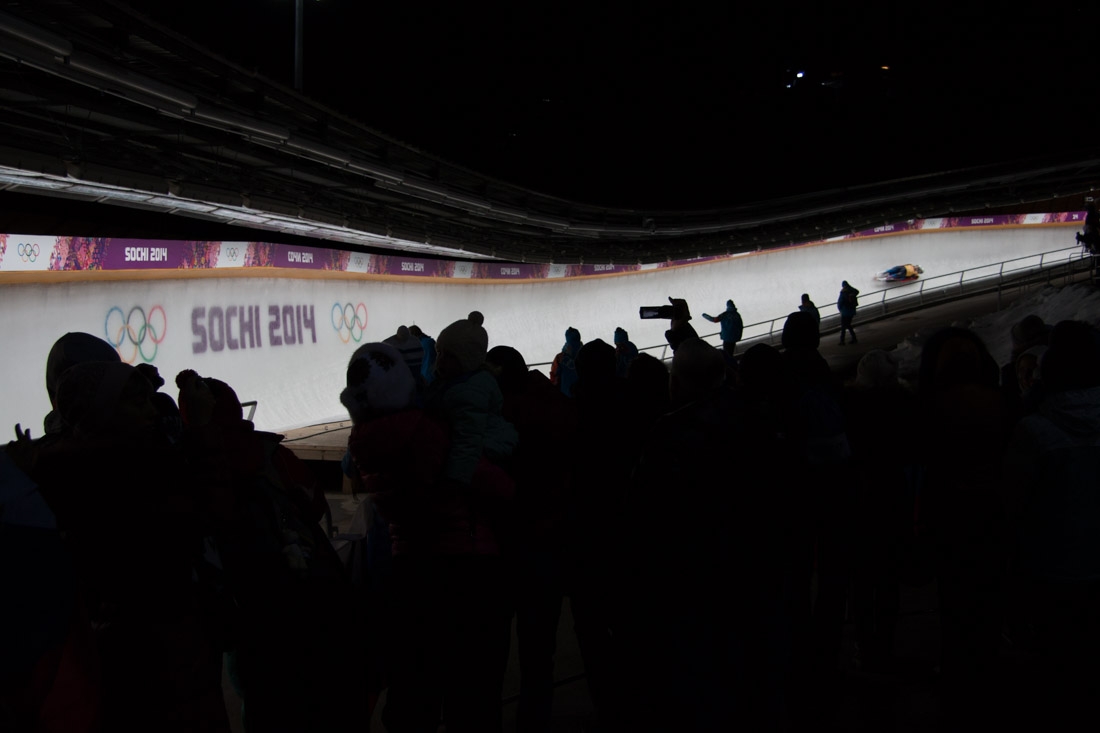 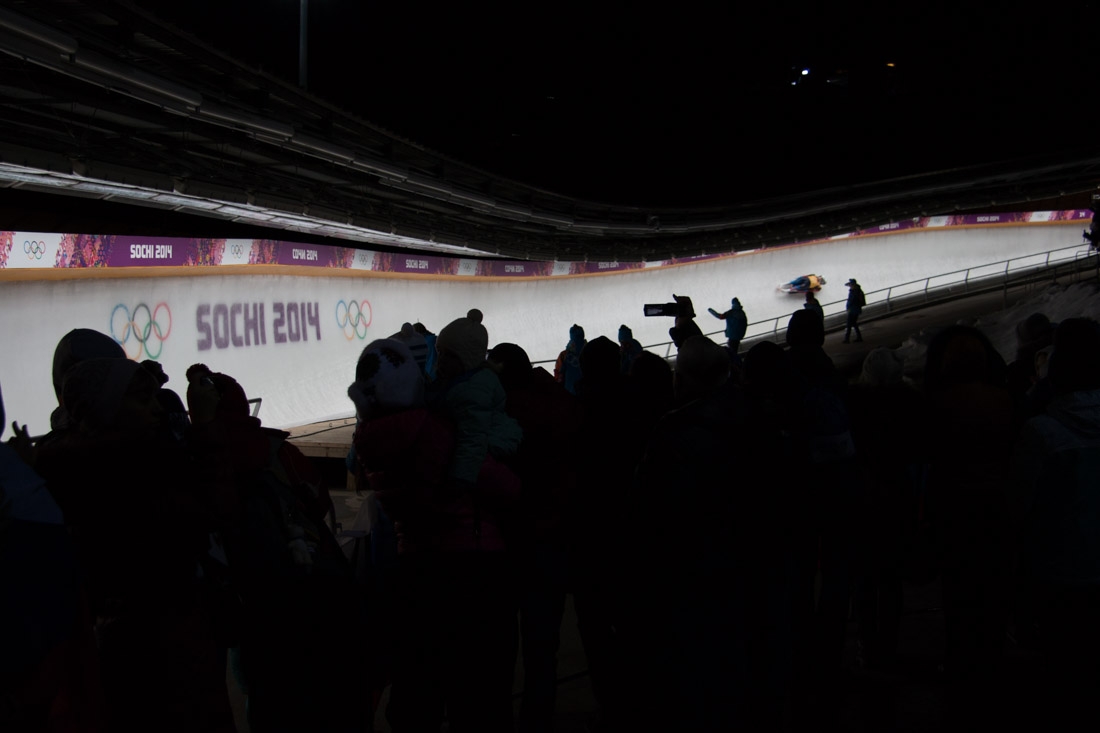 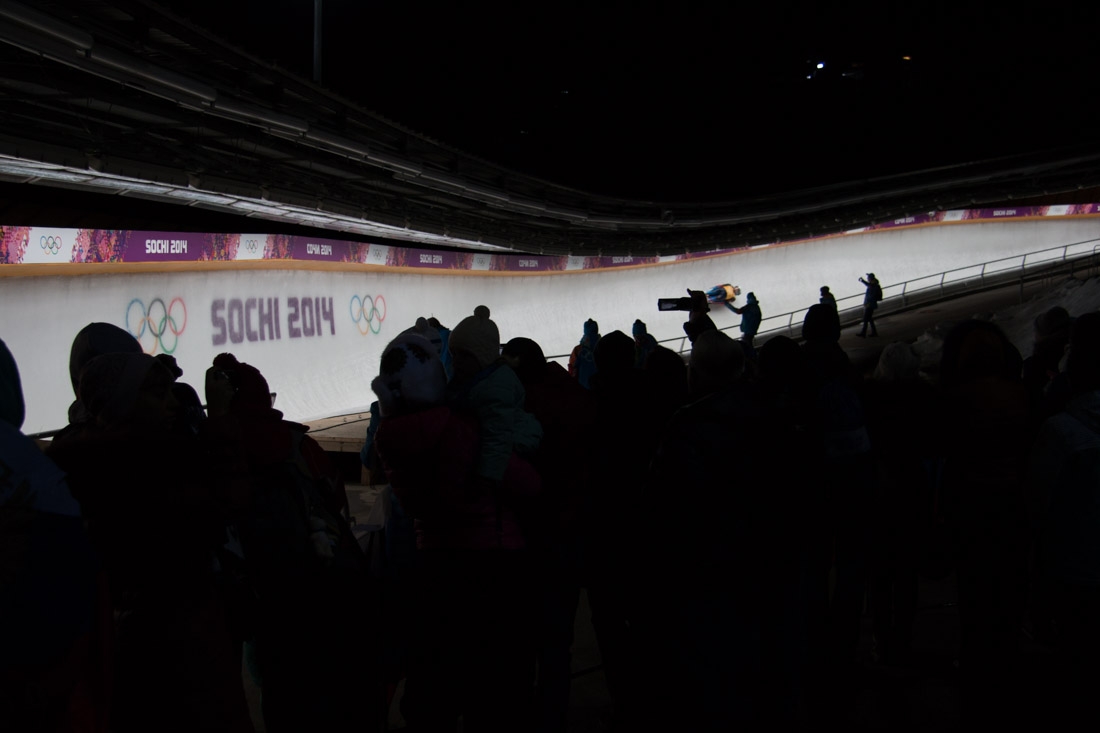 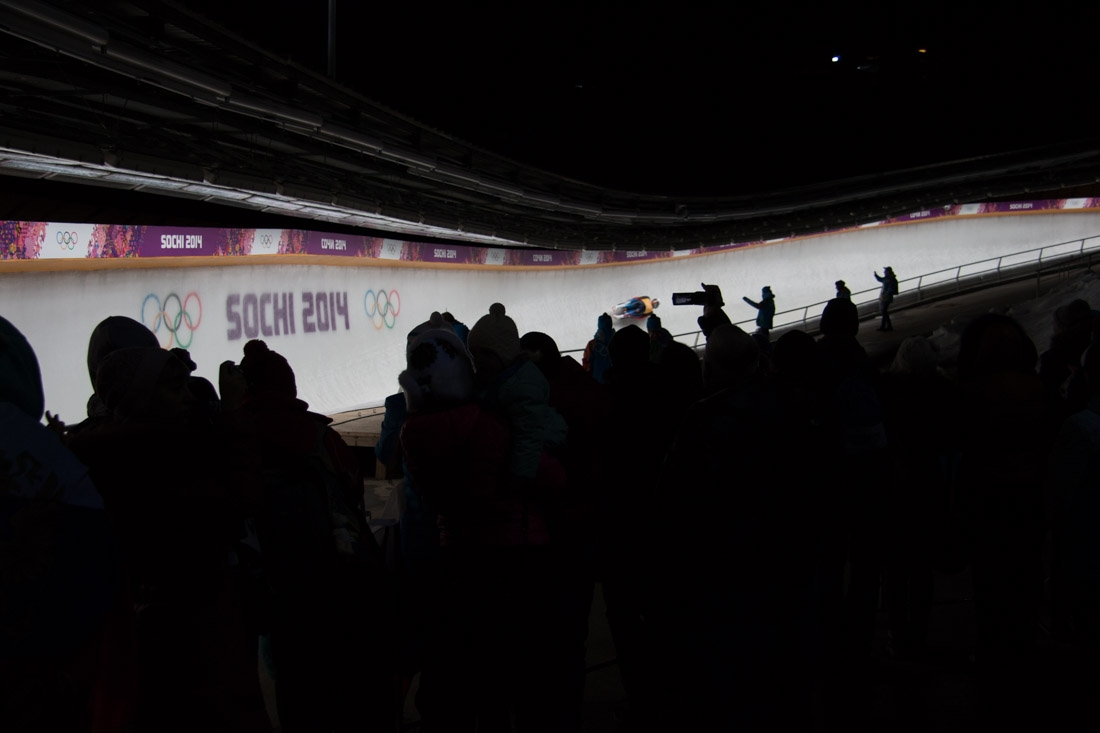 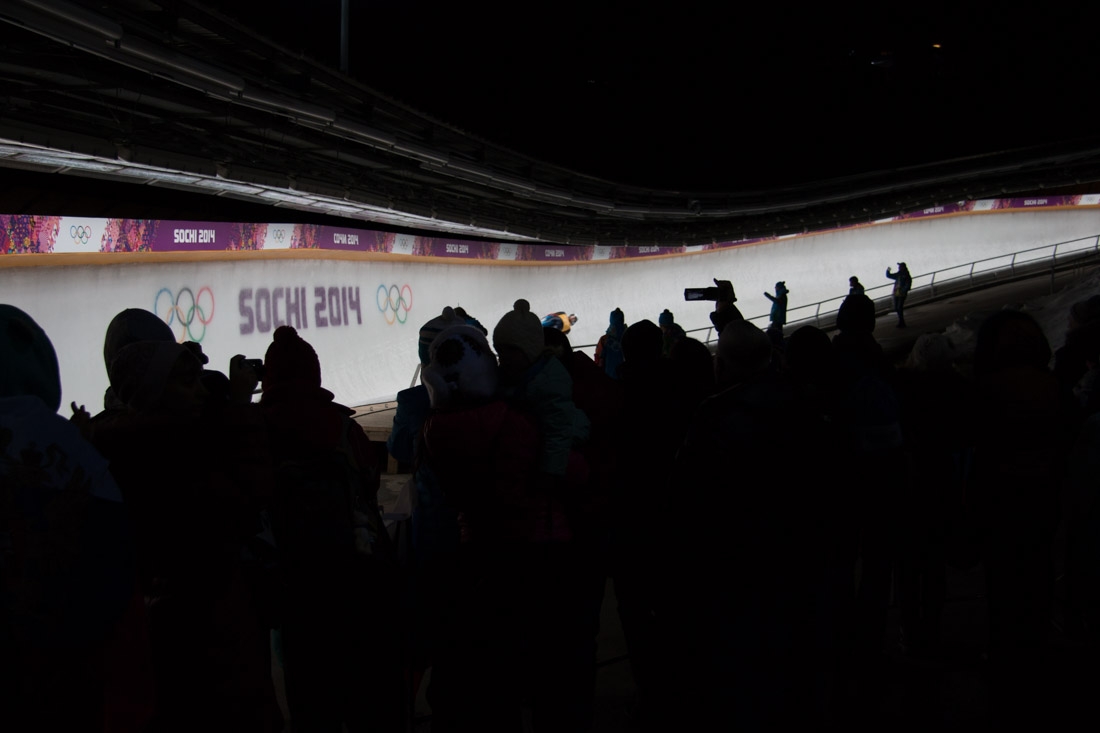 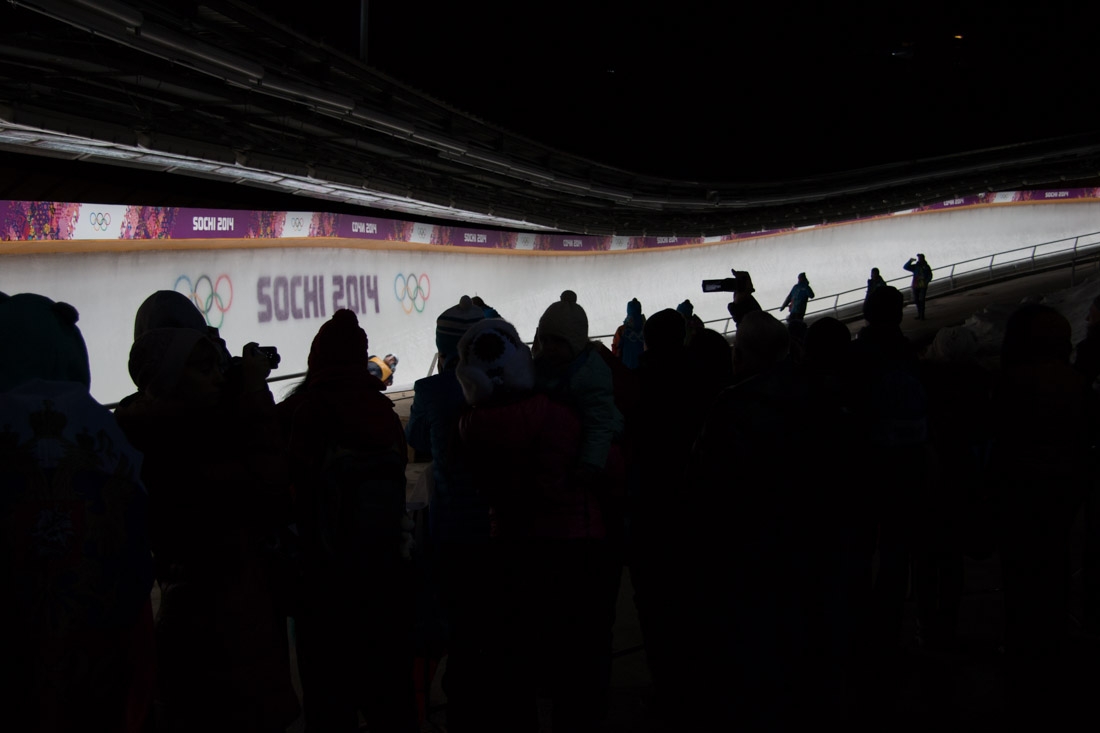 After standing in one section for a while, we walked around to different sections. This was the Luge Team Relay, which was a new competition for 2014. The team member would hit this paddle near the end of the track, signaling that the other team member, at the top of the track, should start. 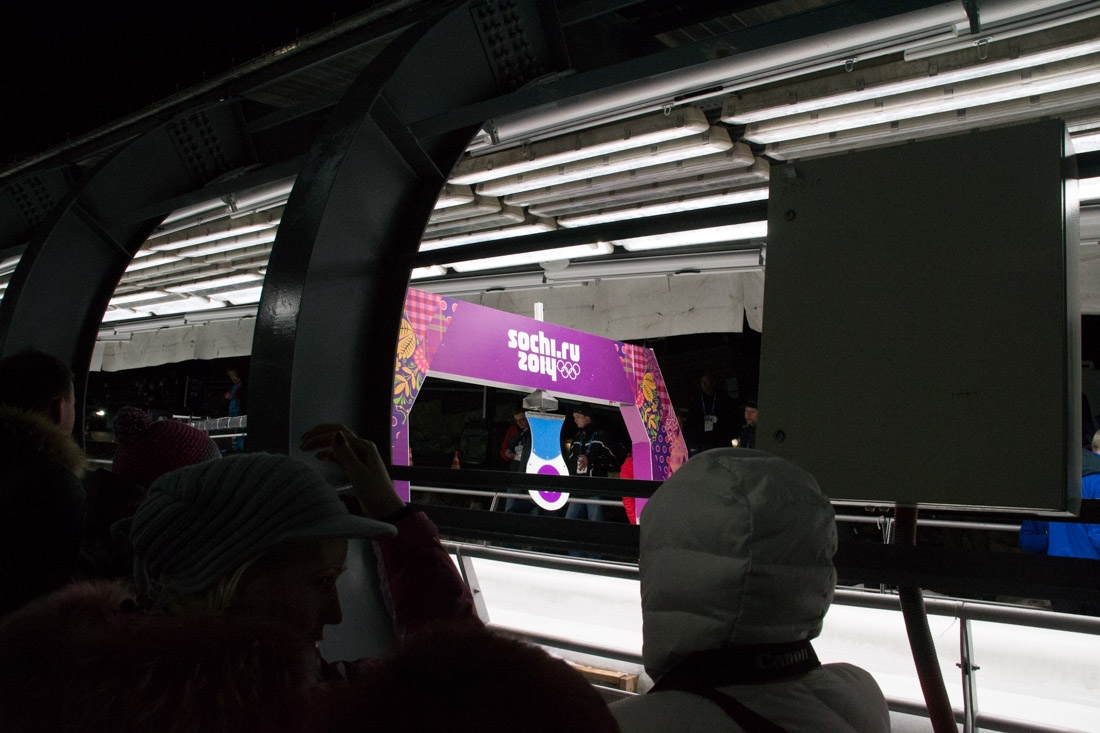 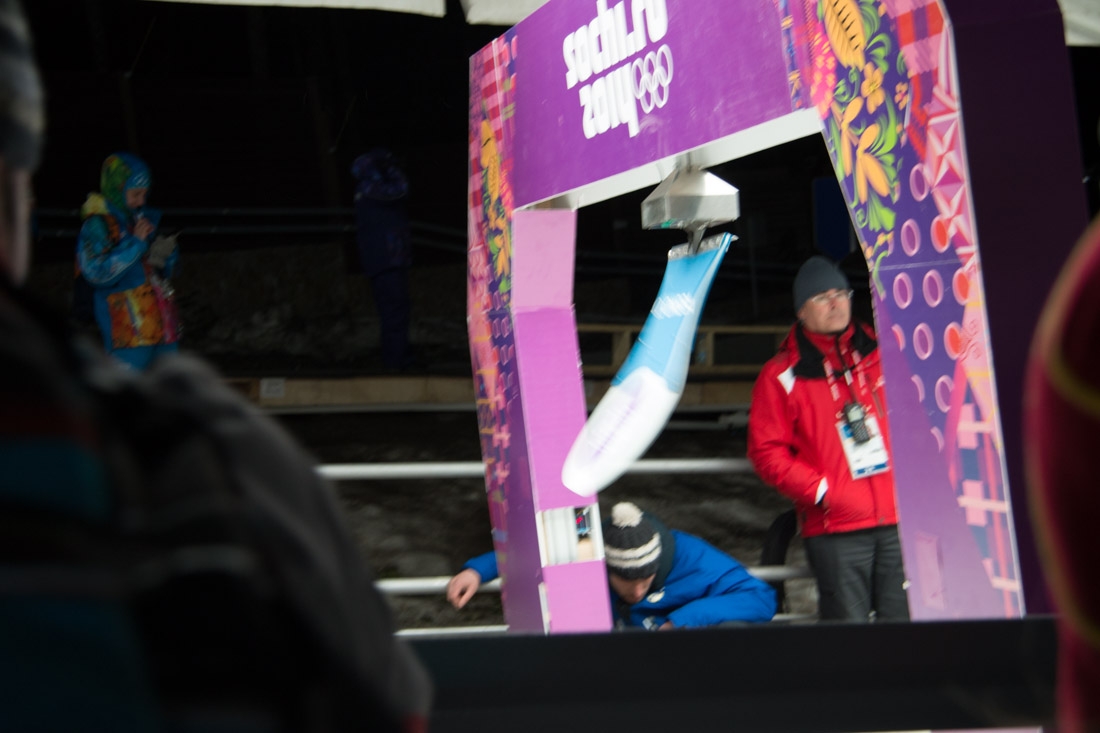 Then they’d zoom by! 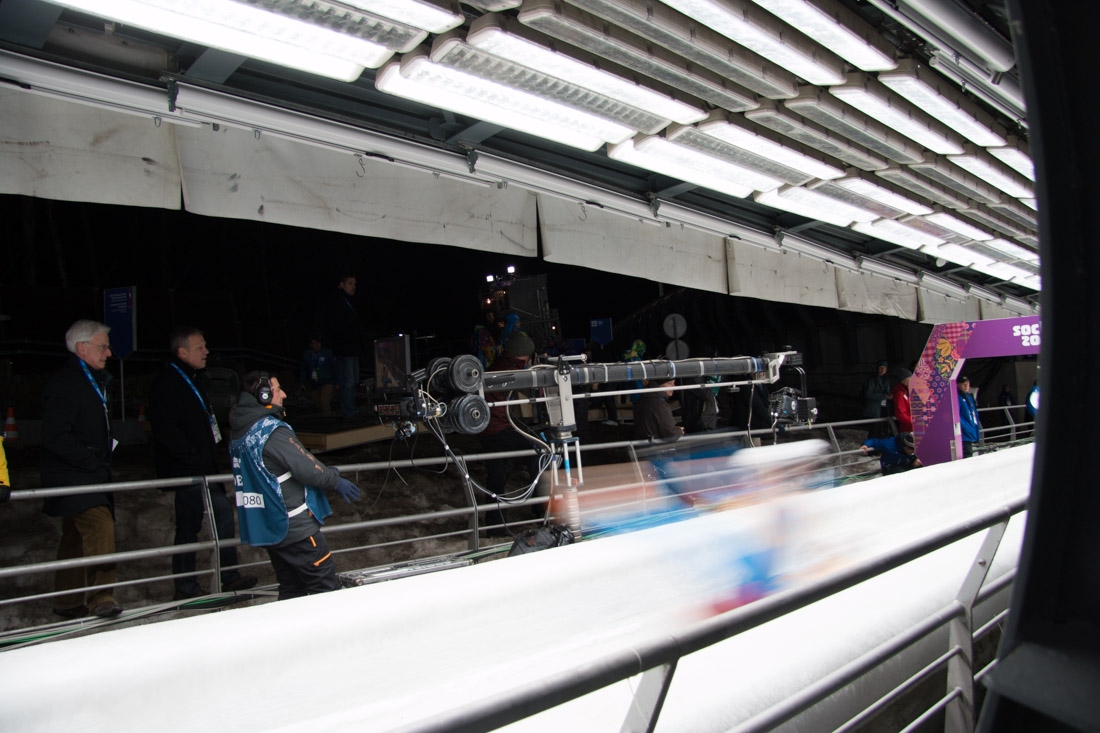 And of course, there were stretchers every so often, a stark reminder of how dangerous this sport could be. 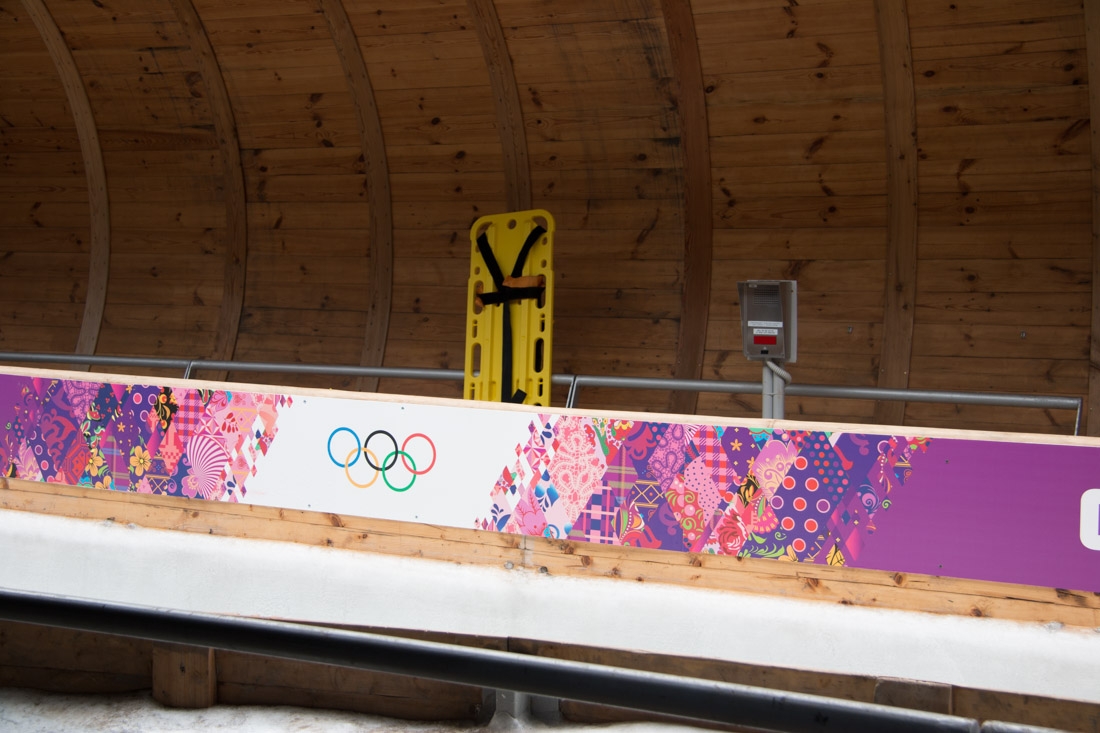 When the competition finished, the track was quickly covered by volunteers that pulled down shades. Presumably this is to keep the track from melting during the daylight hours. 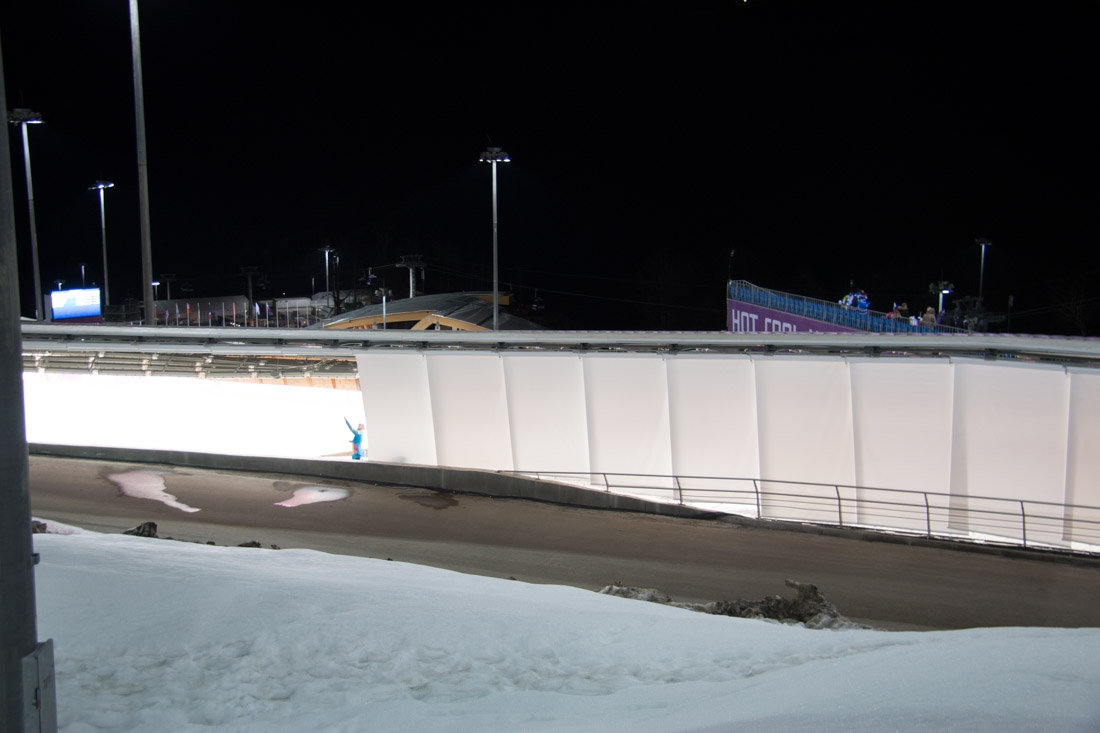 We took the gondola back to Krasnaya Polyana, and then took the train back to Olympic Park (instead of the bus like the night before). The train going down the mountain was much faster than the train going up!

We got back to our ship, had a very late dinner again, and plopped ourselves into bed. We were spent!