I was pretty excited for our stay at the Ararat Park Hyatt in Moscow!

I booked three nights using 66,000 Chase Ultimate Rewards points transferred to my Hyatt Gold Passport account (this was pre-Hyatt devaluation). This hotel goes for up to $750/night, even for a basic room, so this was a great points value redemption!

Before getting to the Hyatt, let’s start with our last night in Sochi.

After the speed skating event, we went back to our ship hotel. Our flight from Sochi to Moscow on S7 airlines was leaving at 5:55AM, so we were going to try and get some sleep. But, by the time we ate, backed up our photos from the day, packed our things, and we STILL weren’t adjusted to the time difference thanks to the crazy Olympic game schedules, we weren’t even tired by 1:00AM. And the ship had arranged for an airport transfer to Sochi airport that was leaving at 3:30AM. Oy.

Our flight from Sochi to Moscow was relatively uneventful. We flew economy on S7 airlines, which is a OneWorld partner. They even served a full and pretty tasty breakfast for the two hour, very early flight! There was some sort of medical emergency onboard, and the flight attendants started giving a man oxygen. I guess he was okay, because we didn’t have to make an emergency landing or anything!

We barely slept on the plane thanks to the excitement of the medical emergency, and we were actually dreading the private tour of Moscow we had arranged for 10AM that day because we were so exhausted. As soon as we landed, I contacted the tour company to reschedule, and they had no problem with that.

Before our trip, we had arranged for an airport transfer through the Ararat Park Hyatt. We landed at Moscow Domodedovo (DME) airport, which is quite far from the city. After checking prices with multiple companies, we were so shocked that airport transfers routinely exceeded $150. So, the airport transfer booked directly through the hotel was not that much more expensive, and we figured they’d know exactly where to take us.

At DME, the driver was holding a sign with the Park Hyatt logo after we picked up our luggage, so he was very easy to find. He walked us to the car, which was just outside the door. The car was a Mercedez Benz E-class. It was a nice looking car, but there was some trash in the back seat, like empty water bottles, which I was pretty disappointed with. As soon as Ken and I got in the car, with both passed out asleep.

When we arrived at the hotel we were hoping so so much that they would let us check in even though it wasn’t even 9AM, and check in time wasn’t until 3PM. We figured we’d offer to redeem more points for another “night” just to be able to check in. But luckily they had a room for us!

We went up, I snapped some pictures, and we slept for probably nearly six hours before heading out to do some touring of our own of Moscow!

Our room was a Park King. As soon as you entered the room, there were two closets and the door to the bathroom on the left. This is the view looking down the hallway. 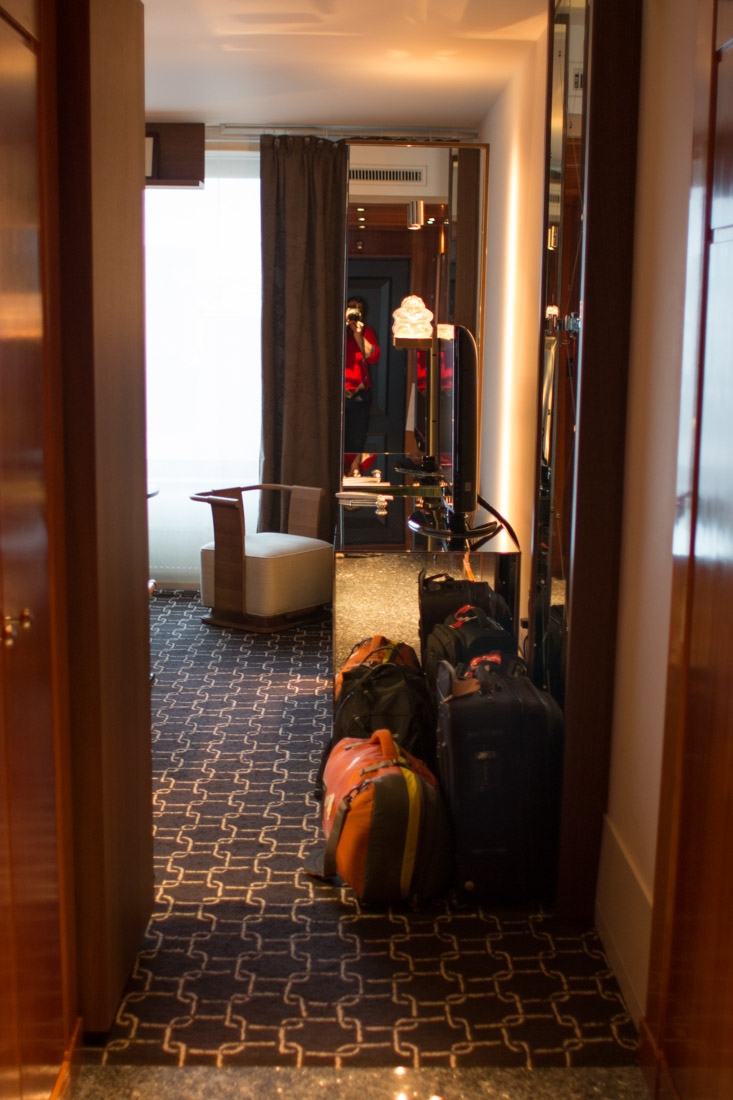 The bedroom area was small but lovely. 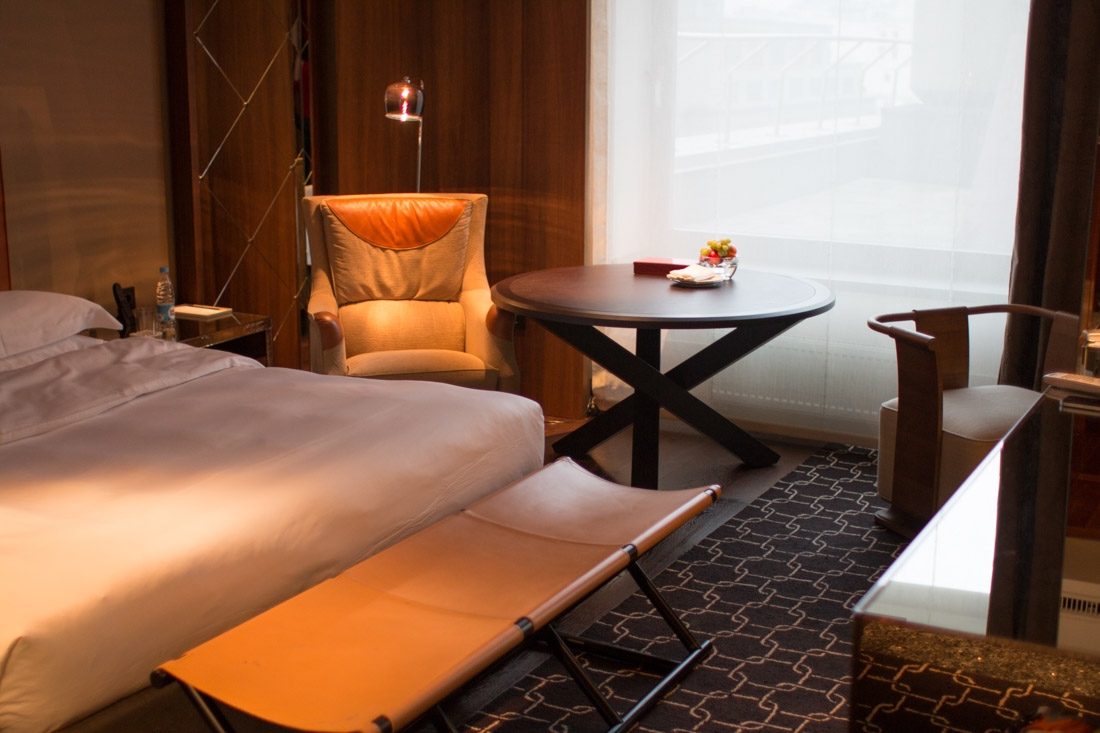 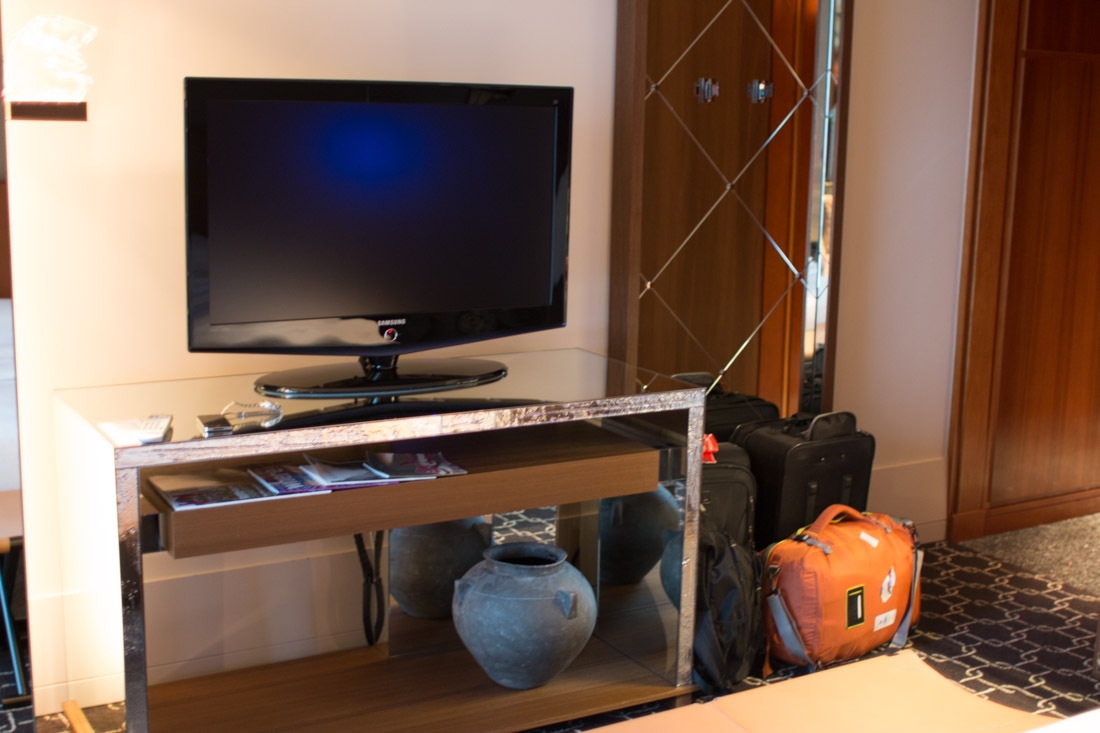 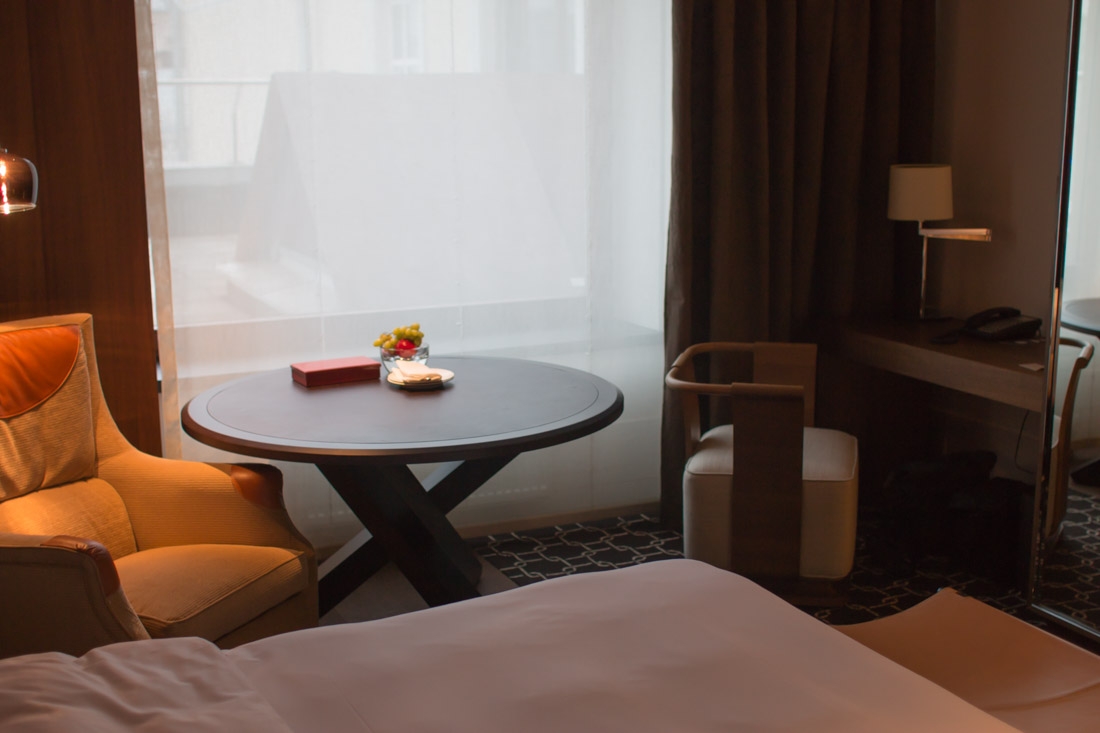 There was a small desk and easily accessible power outlets in the corner. My only complaint was that the chair, which swiveled so you could use it at either the small table or the desk, was so insanely heavy, making it difficult to move it closer to the desk. 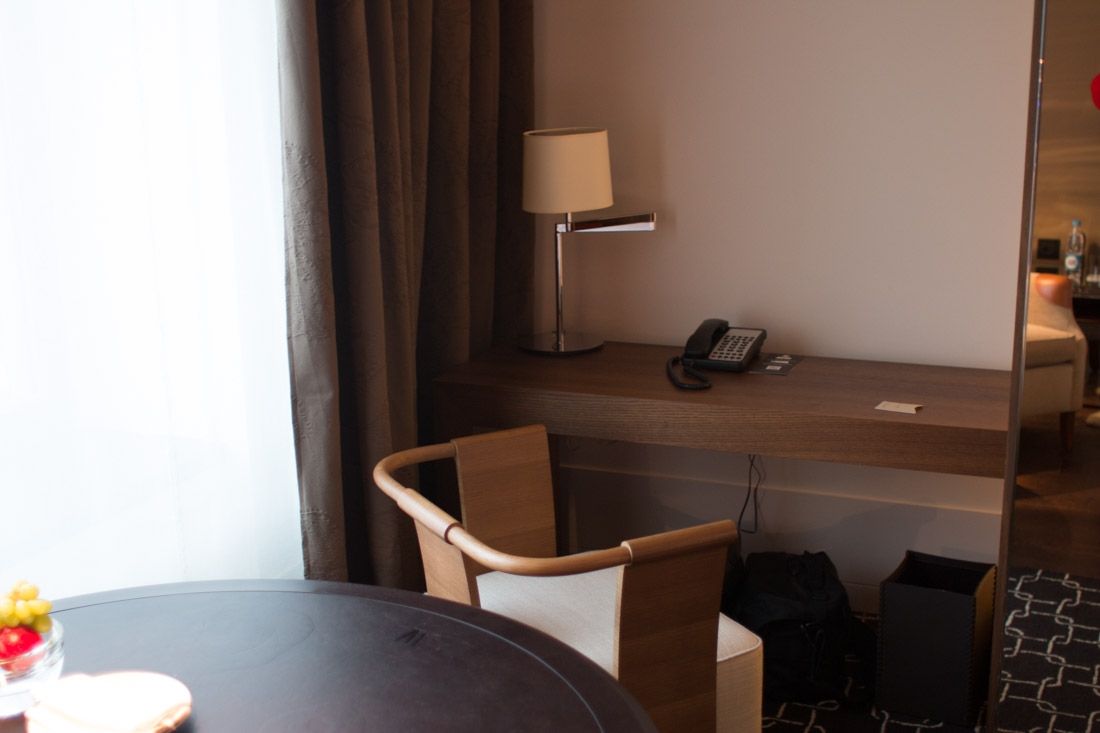 There was a small nook next to the bed housing coffee and tea supplies. 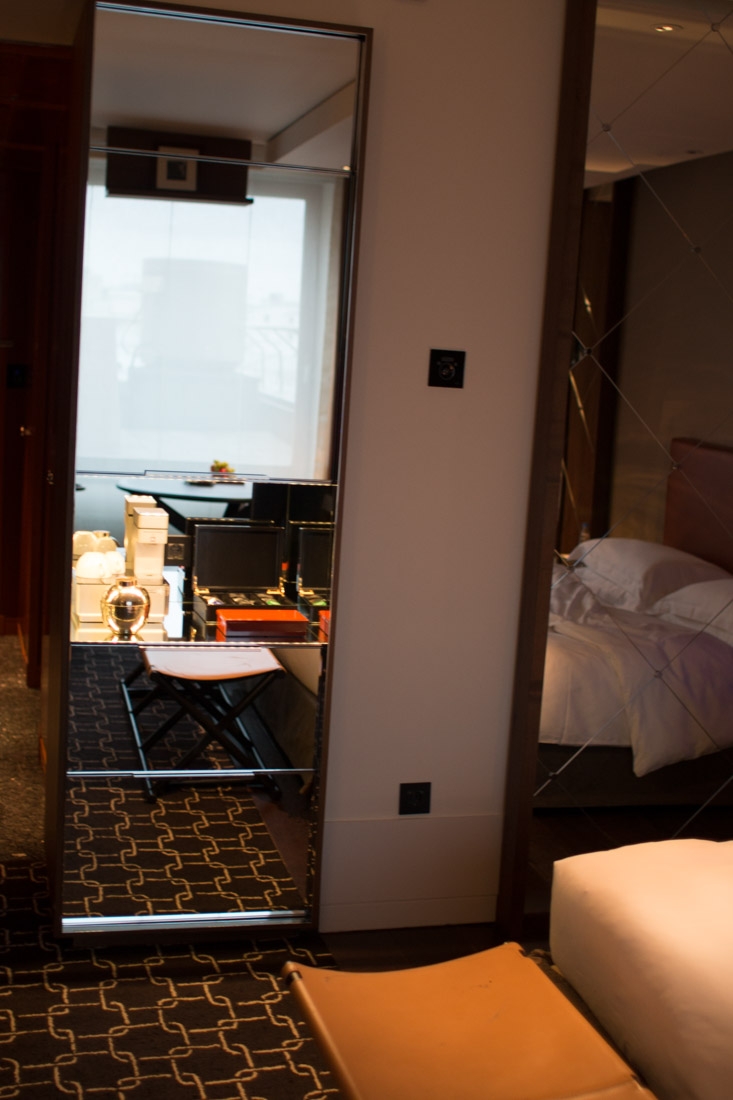 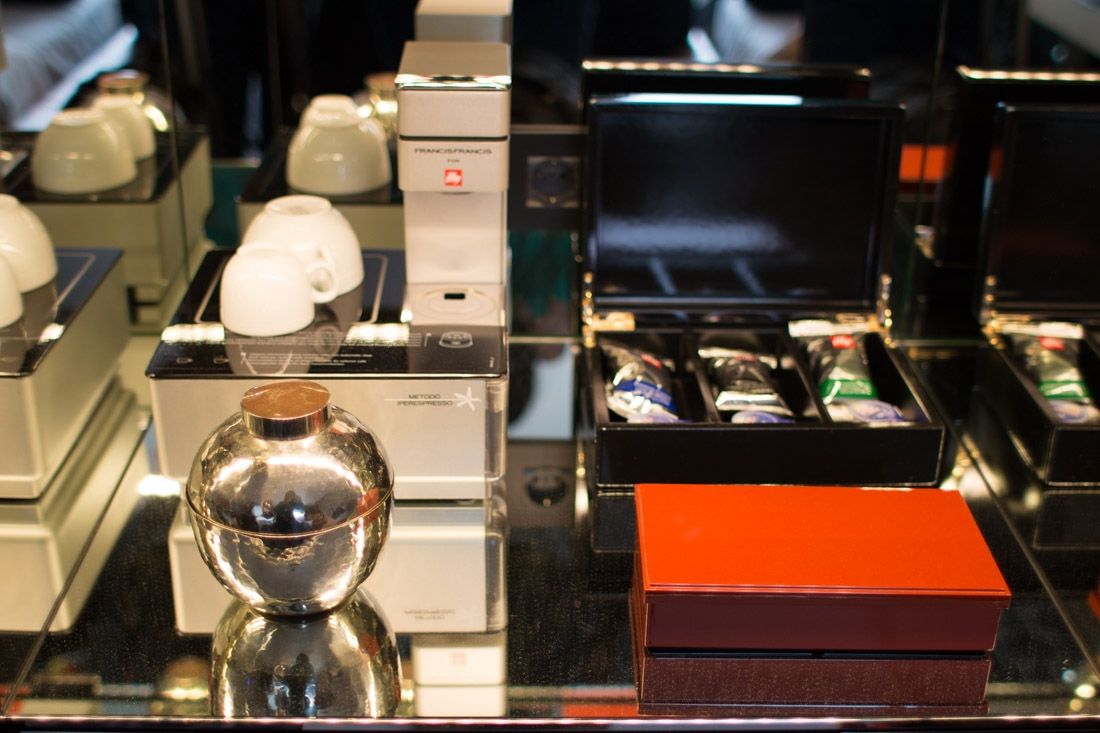 I thoroughly enjoyed the room’s automation features. Next to each side of the bed was a small control panel. 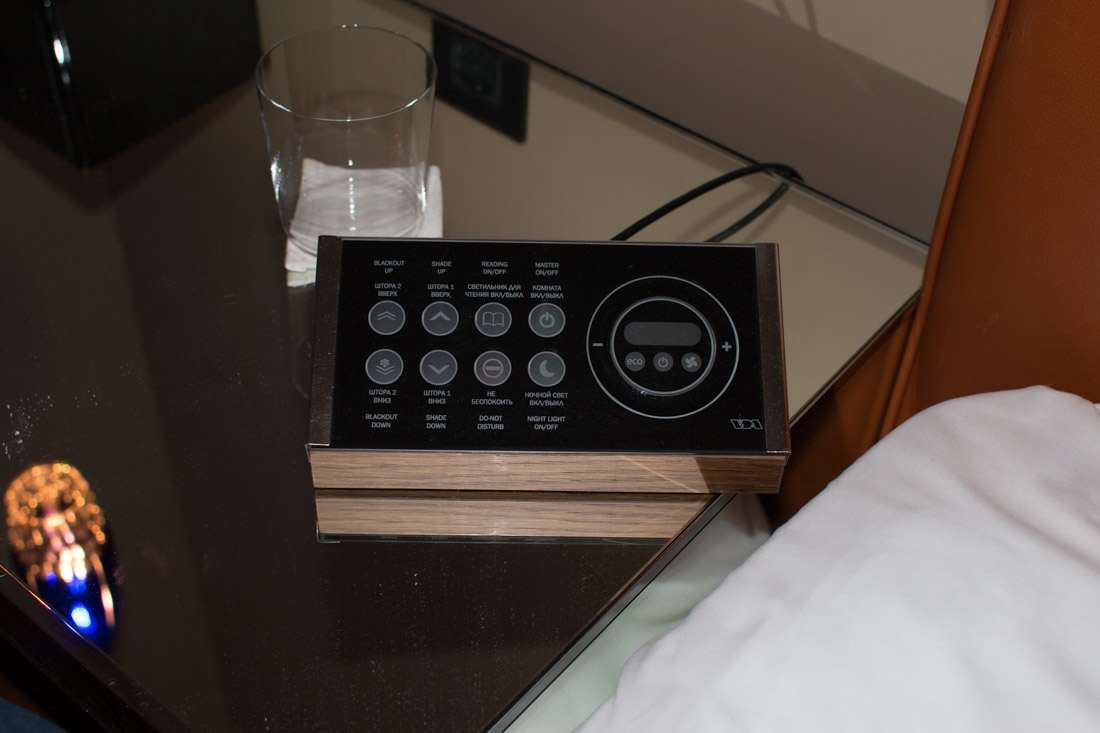 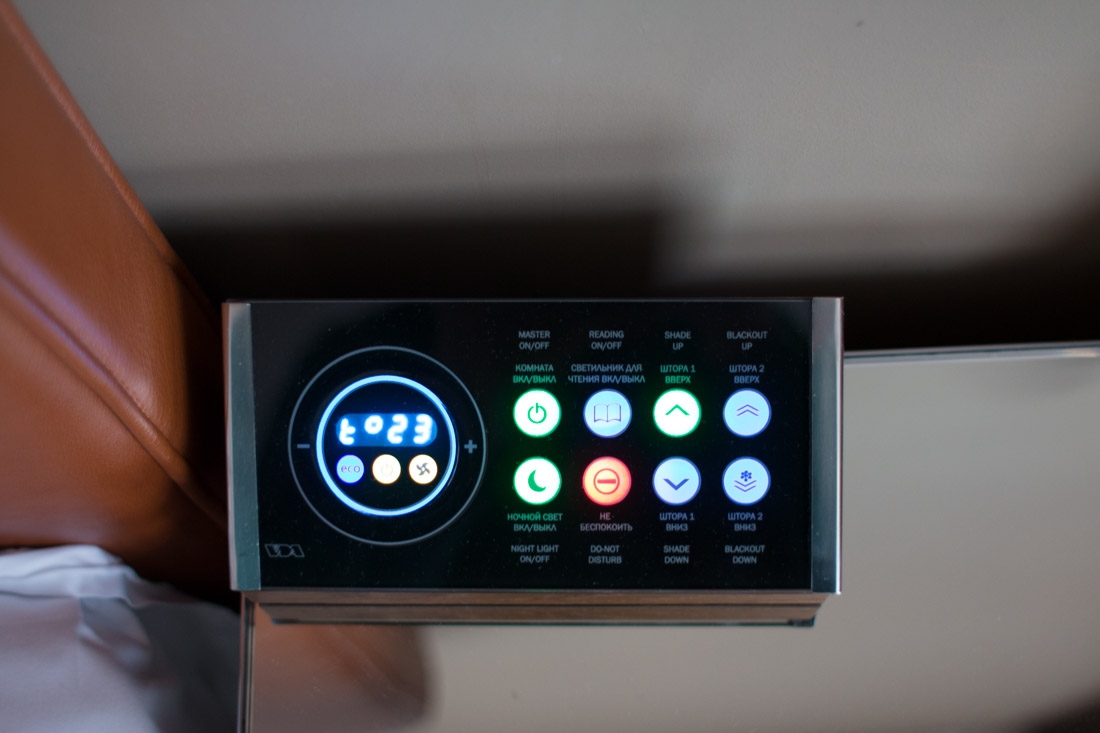 From this control panel unit, you were able to control the temperature in the room, adjust the shades or blackout curtains, turn on or off lights, and, perhaps the most fun, set your room to “do not disturb.” None of those pedestrian “do not disturb” door hangars at the Ararat Park Hyatt!

I didn’t get a picture of it, but there was a similar unit in the room’s hallway, which also allowed you to control the radiant floor heating in the bathroom.

The view certainly wasn’t anything to write home about, but the Ararat Park Hyatt was on a pretty narrow street, so I don’t think there would have been any amazing views of anything anyway. 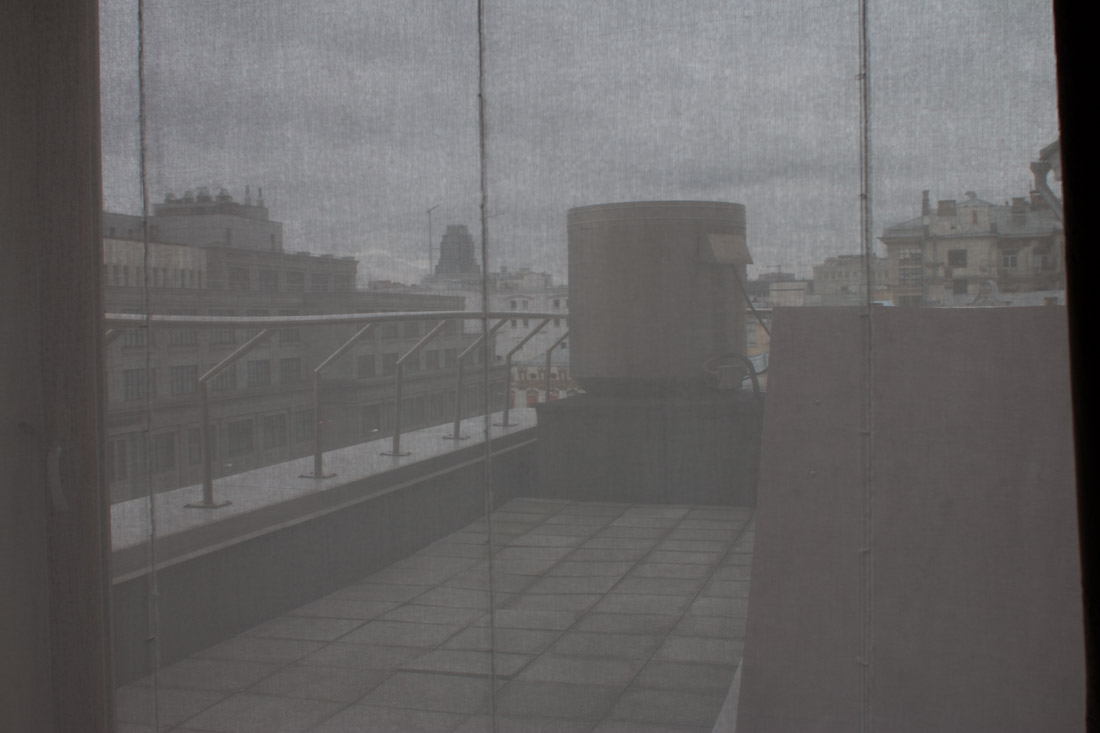 Looking down the hallway from the bedroom area. 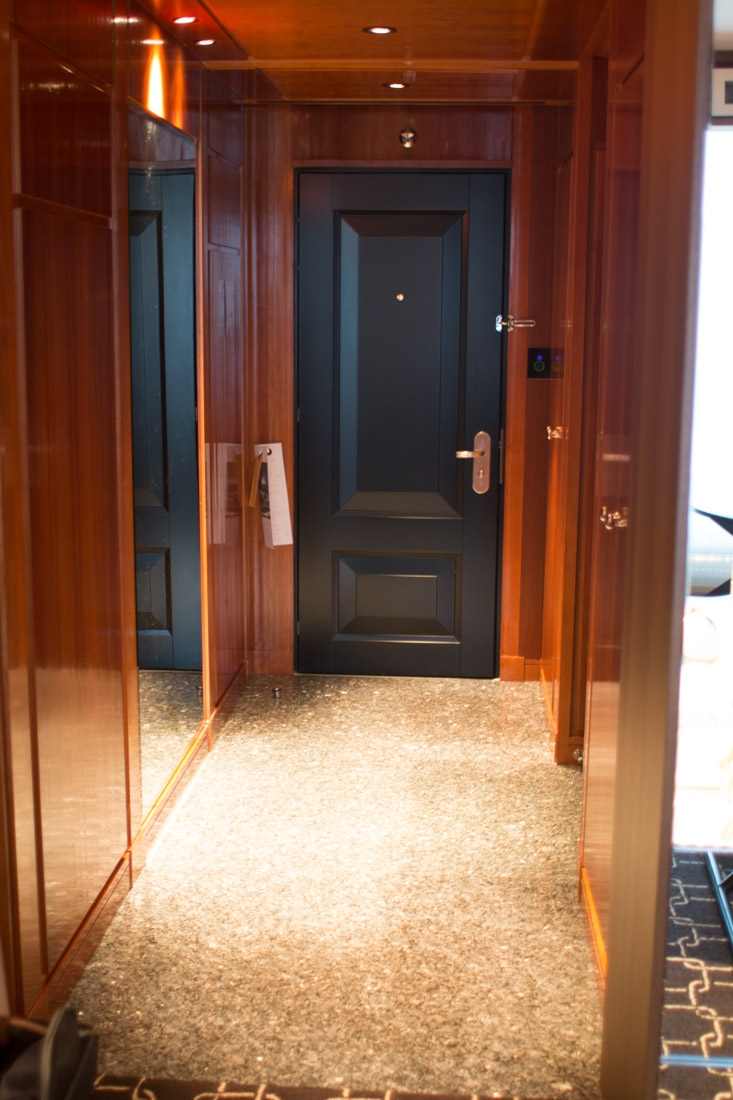 The bathroom was AMAZING. So, so incredible. For one, there was radiant heating on the granite floors. Being in Moscow in FREAKIN’ WINTER, the radiant floor heating was such a luxury! The decor was beautiful and there were many mirror and glass finishes, like on the sink area. The sink area also had plenty of counter space and storage to the left and right of the sink. 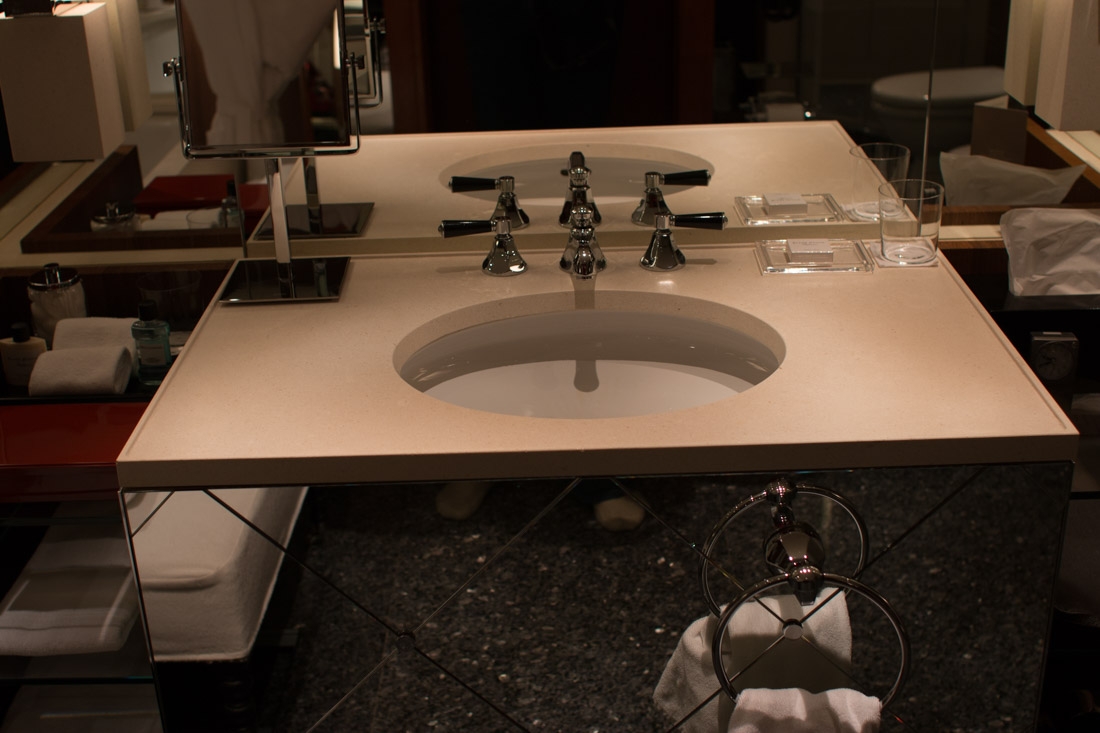 I also used this huge tub twice during our three day stay. 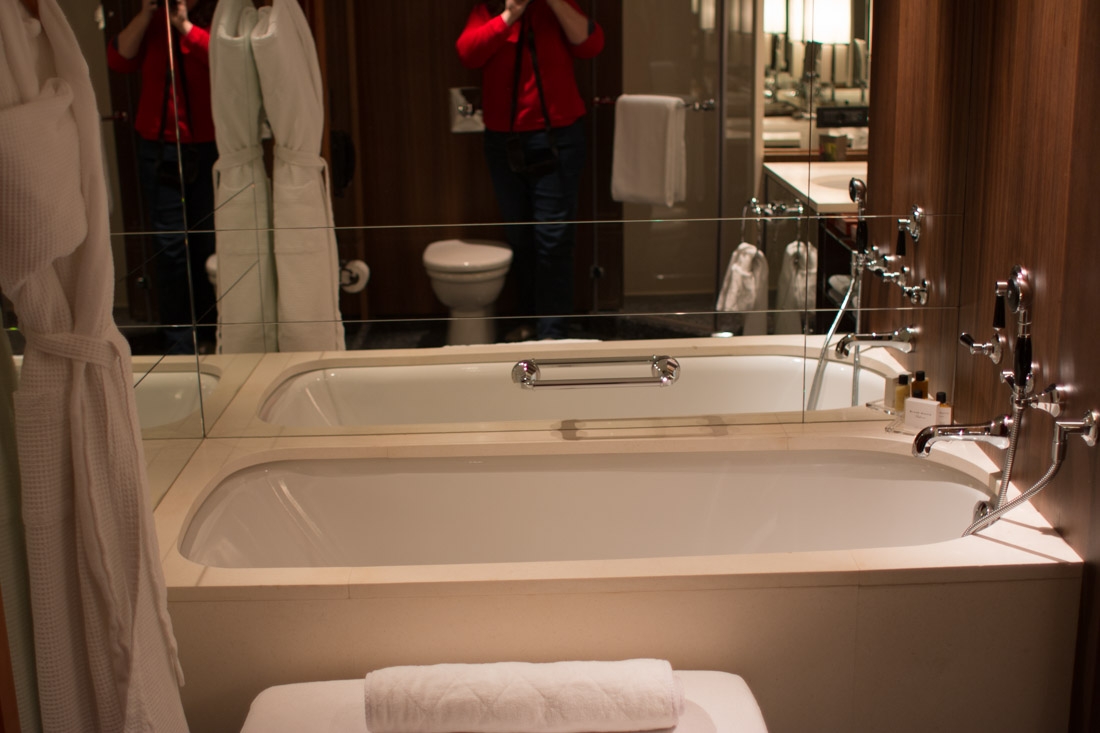 There was a glass enclosed, standalone shower in the bathroom. I did have one minor complaint about the shower. Whatever texture they put on the floor to make it nonslip really kind of hurt my feet. They looked like very thick grout lines or something, and there were about five of them, so they were hard to avoid while standing in the shower. 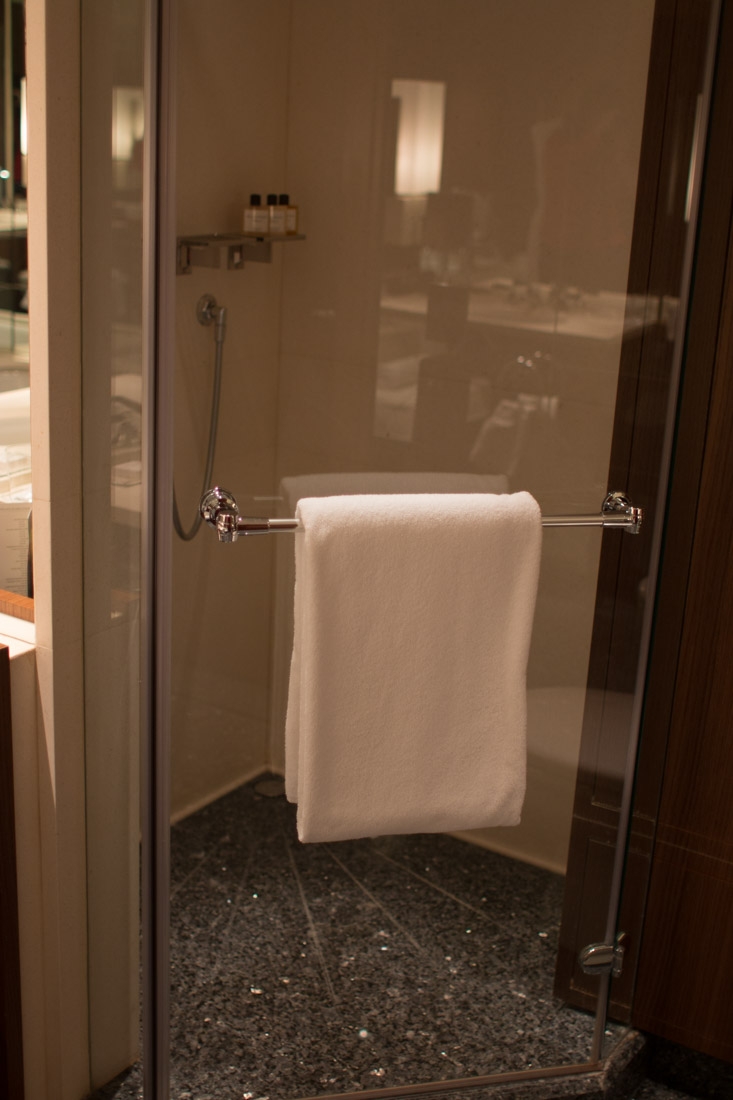 The toilet was not separated from the rest of the bathroom, but that’s not a major complaint. 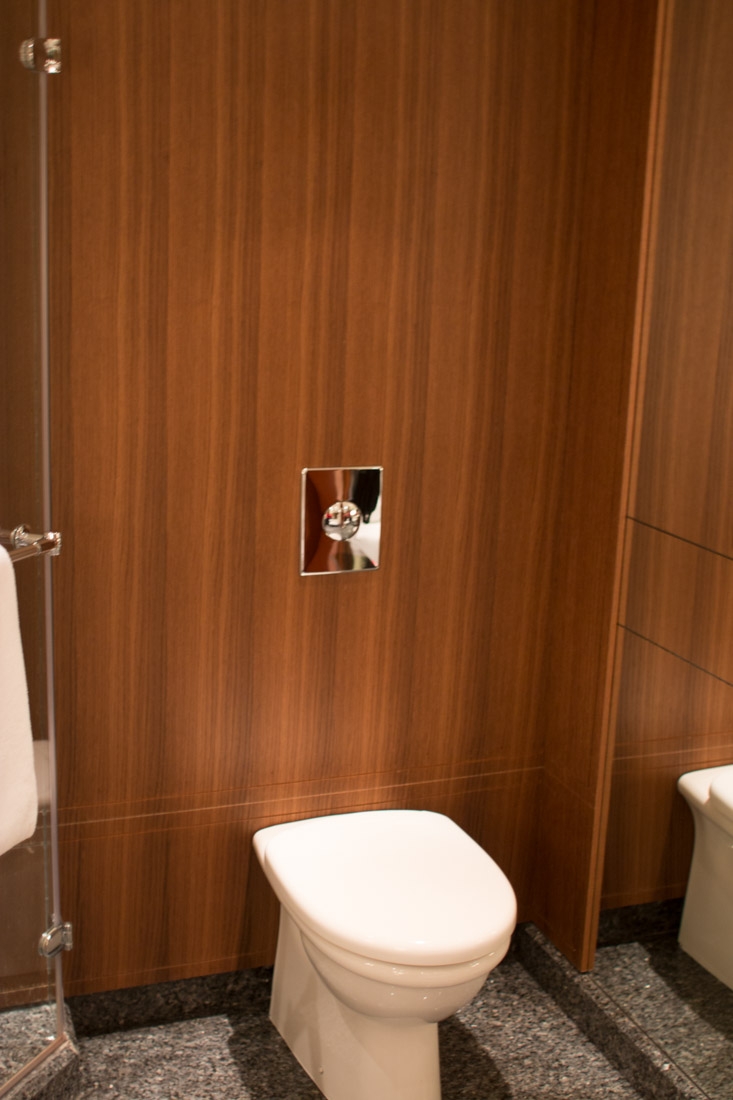 While taking pictures of the hotel lobby, I was promptly interrupted by a hotel employee. He stretched out his arm, panning the room and said, “Please. The children.” Nevermind that there was not a single child in sight. I just said that I was a guest, and continued to take photographs. He looked annoyed, but did not object any further. If he had, I probably would’ve stopped. 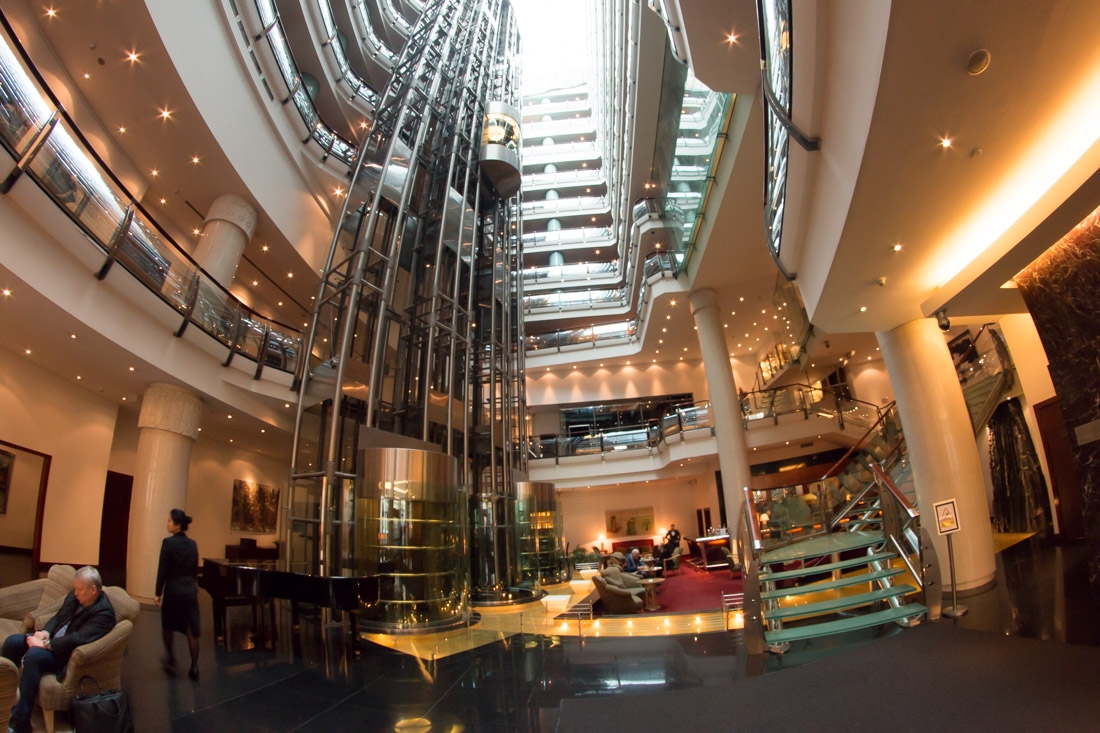 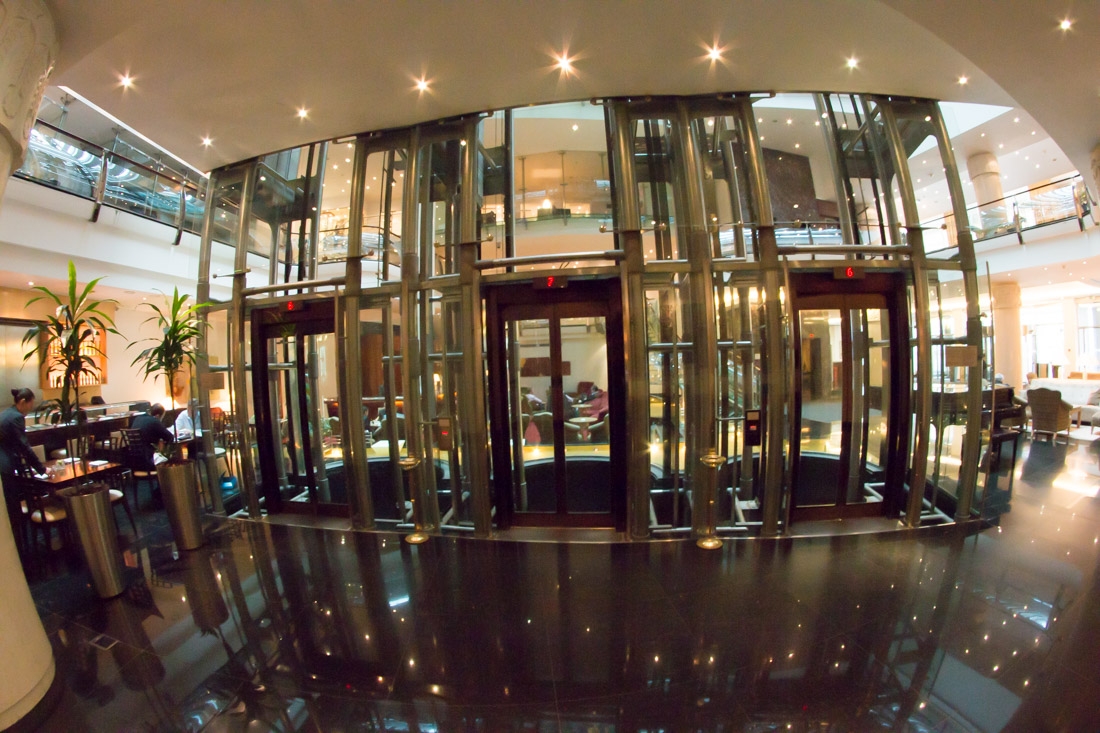 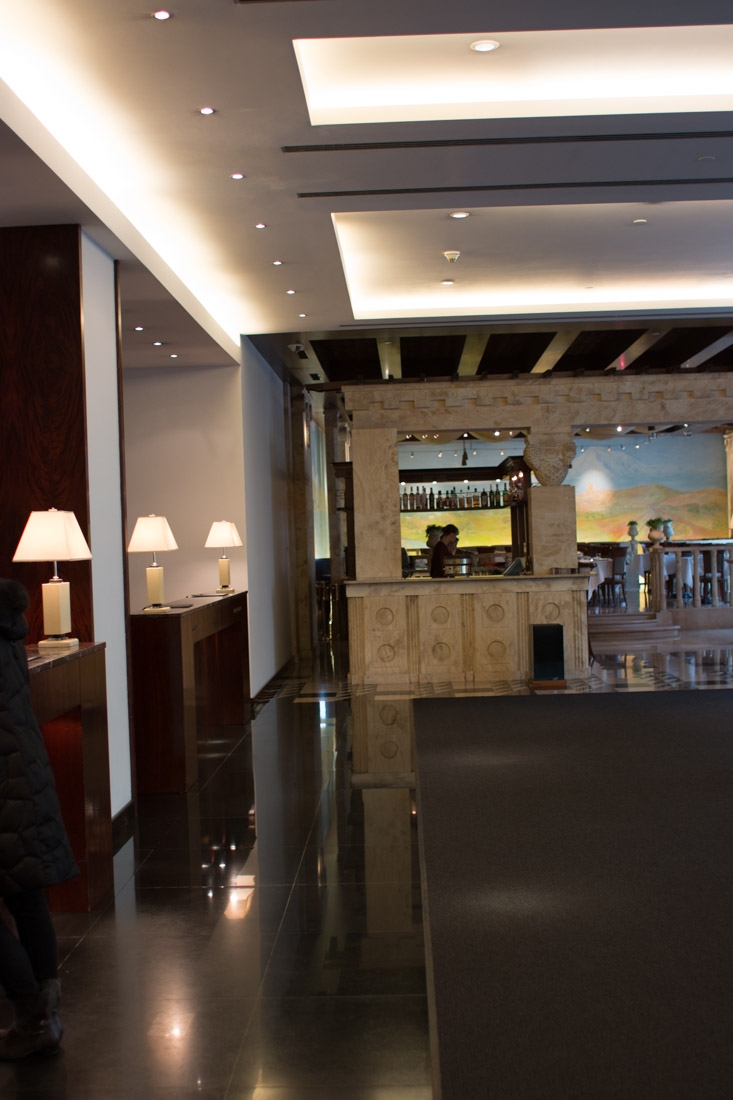 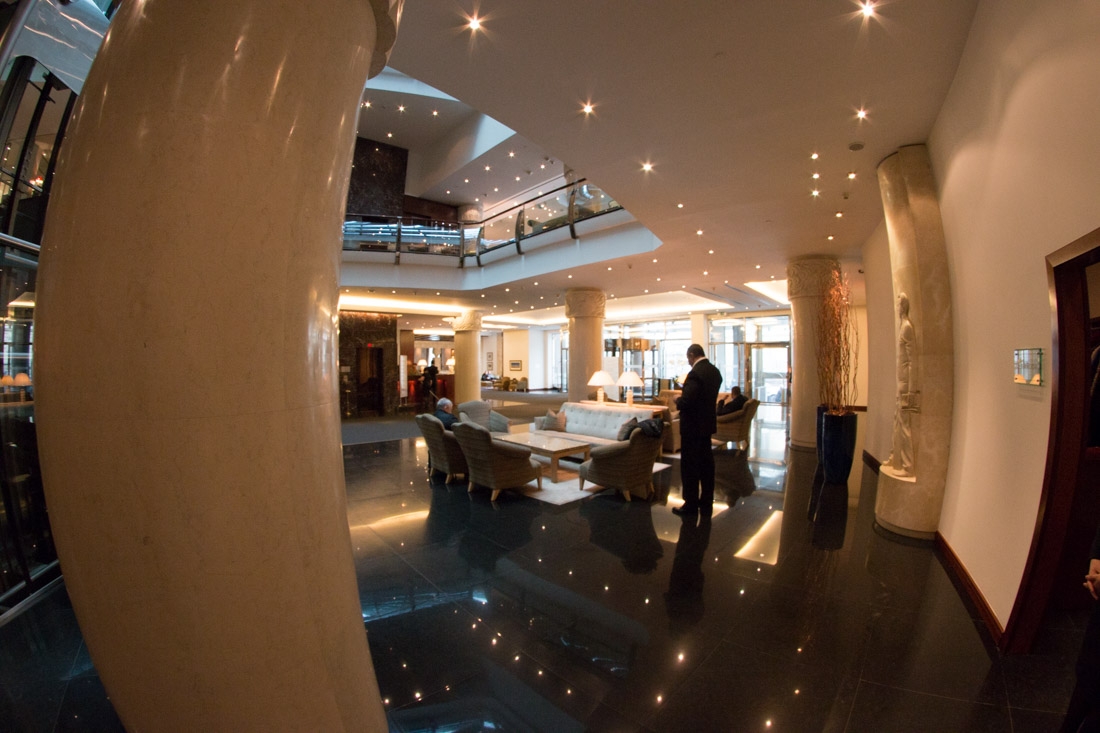 I also took some photos from our floor. I believe we were on the 7th or 8th floor. 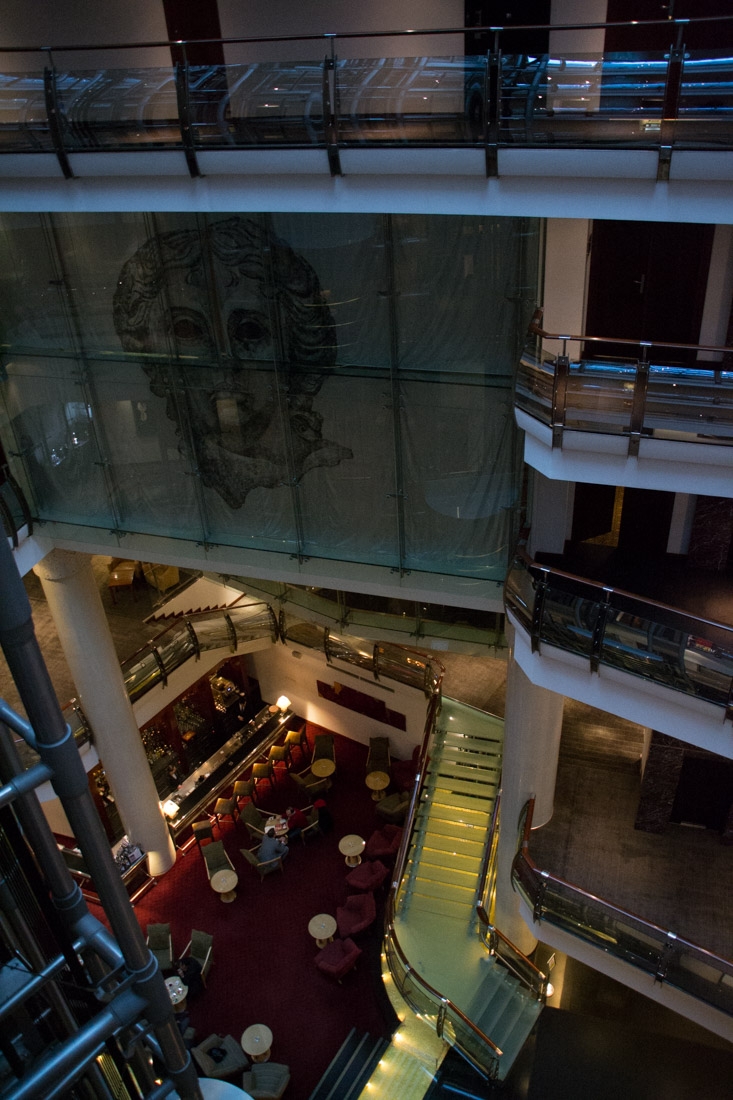 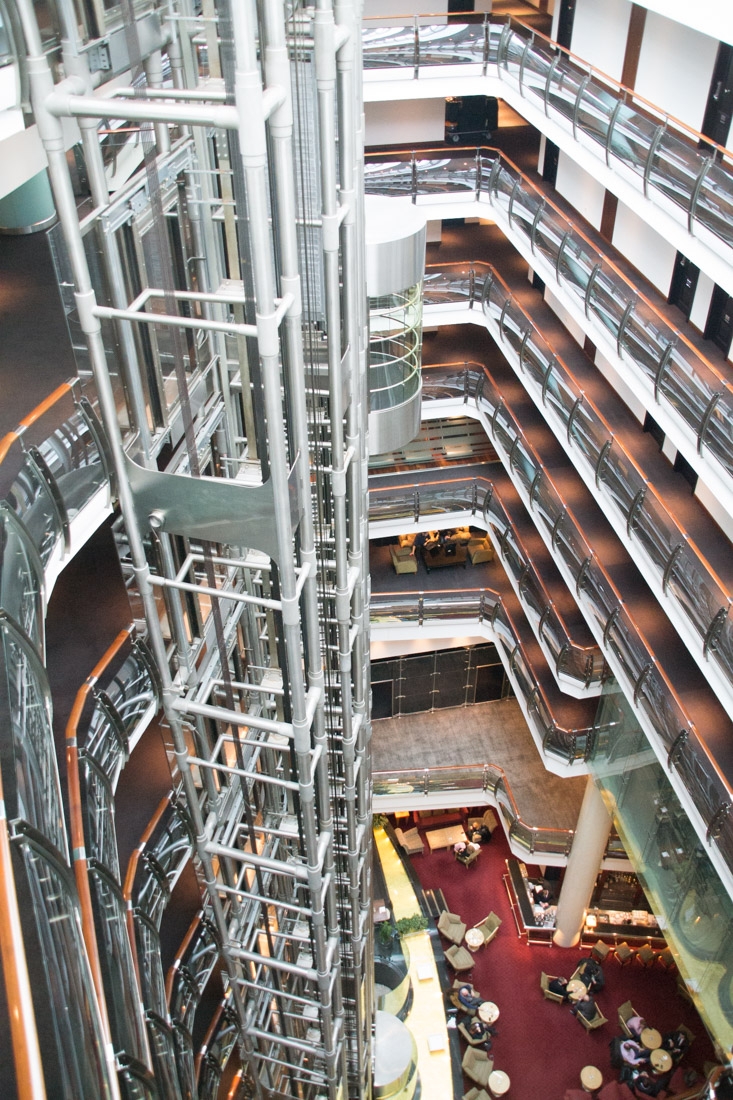 We did eat breakfast at the hotel one morning, and it was very tasty, but unfortunately it was incredibly expensive ($30 for a plate of pancakes anybody? $45 for the buffet?). Sorry, I didn’t get any photographs of it.

Luckily we found a nearby pastry shop that served as our breakfast location for our remaining days in Moscow!

I’d definitely recommend the Ararat Park Hyatt to anybody planning a trip to Moscow. The service was impeccable. The concierge staff even booked and picked up train tickets for us, and left them in our room while we were out touring. It was also incredibly easy to arrange for our visa support letters prior to our departure, which is a requirement when getting a Russian tourist visa.

I’m definitely excited to try other Park Hyatt properties in the near future!

[…] There was no bathtub, but that’s not a complaint. (Even though I had baths in the fantastic tub at the Park Hyatt in […]