We had an approximately 8 hour layover in Istanbul. We had a few discussions on what to do during that layover.

Option 1: Go sightseeing in Istanbul on our own
Option 2: Hire a guide to jam pack as much sightseeing as we could in Istanbul in just a few hours
Option 3:  Just hang out at the airport

There were a few additional sightseeing options that would have been nice, but they would not work because the times did not work out. For example, Turkish Airlines provides free (FREE!) tours for passengers on a long layover in Istanbul. You can read more about the tours and times here, but basically the tours departed at either 9:00AM or 12:00PM. Since our flight was not scheduled to arrive until 4:45PM Istanbul time, neither of those tour departure times would work for us.

In fact, with our late afternoon arrival, we realized that many of the major sites in Istanbul would be closed by the time we’d get out of the airport and arrive in the city. For instance, the Hagia Sophia closes at 5:00PM. We knew there could be other things to visit, like the Grand Bazaar, in the evening hours, but we ultimately decided leaving the airport would not be worth the hassle.

Plus, I was SO excited to visit the Turkish Airlines lounge at Istanbul Airport, which is purported to be one of the best airline lounges in the world. I read that the lounge had sleeping rooms and showers that we could use, so we could just use our time at the airport to enjoy the lounge and get some rest. (I had read that your layover has to be 8 hours to get access to one of the sleeping rooms, and that they are very strict on the full 8 hours. Since our flight was arriving at 4:45PM and our connecting flight was departing at 12:15AM, it wasn’t quite an 8 hour layover, so I was really hoping to arrive in Istanbul early!)**

We did arrive in Istanbul nearly an hour early! After we deplaned in Istanbul, we followed signs for International Departure connecting gates. We had to transit security, but luckily we did not have to transit any immigration or customs since we were not leaving the airport, so that saved us some time. The security line moved quickly.

After security, we followed signs for the Turkish CIP Lounge. It was at the complete other end of the airport, so we got to see a lot of the airport’s amenities as we walked by!

When we got to the lounge, I showed them our ticket stubs from our business class flight we had just flown. The woman working said that this was a departures lounge, so they had to see our connecting tickets. I just thought this would be to confirm that we did, in fact, have a connecting flight.

If you recall from the introduction post, business class award seats never became available for our flight from Istanbul to Sochi, so we had to purchase coach seats.

The woman working behind the desk said we couldn’t use the lounge because our connecting flight was not business class! It didn’t matter that we had just spent 10 hours on a business class flight from Washington. I had not read about this anywhere, and I was trying to find information about it on my phone while standing there, but they were insistent that we could not use the lounge.

I was SO bummed and really disappointed in myself that I hadn’t known this was a possibility. (Although to be fair, I still cannot find any information online that specifies this policy, even through anecdotal information). I had been so excited to see the lounge after reading descriptions of it, like here and here. 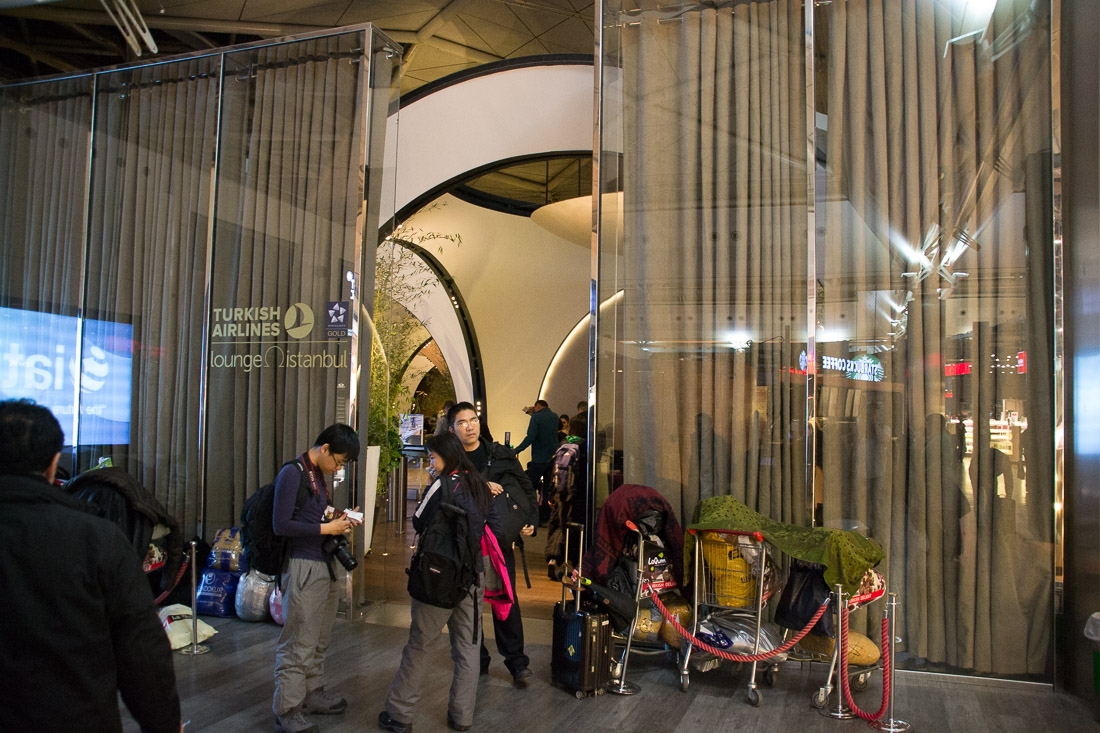 Ken and I were hot, feeling pretty gross after our long flight, and just wanted a quiet place to relax. I knew there was a hotel right in the airport, so we set off to find it. Luckily it was just downstairs from the lounge. It was outrageously expensive, but we didn’t want to hang out on airport seats for the next 8 hours. The hotel had rooms available so we booked a double room for 4–6 hours for 154 Euros (about $210). Ouch. But, it was so convenient because it was on “airside,” meaning we wouldn’t have to transit security again. 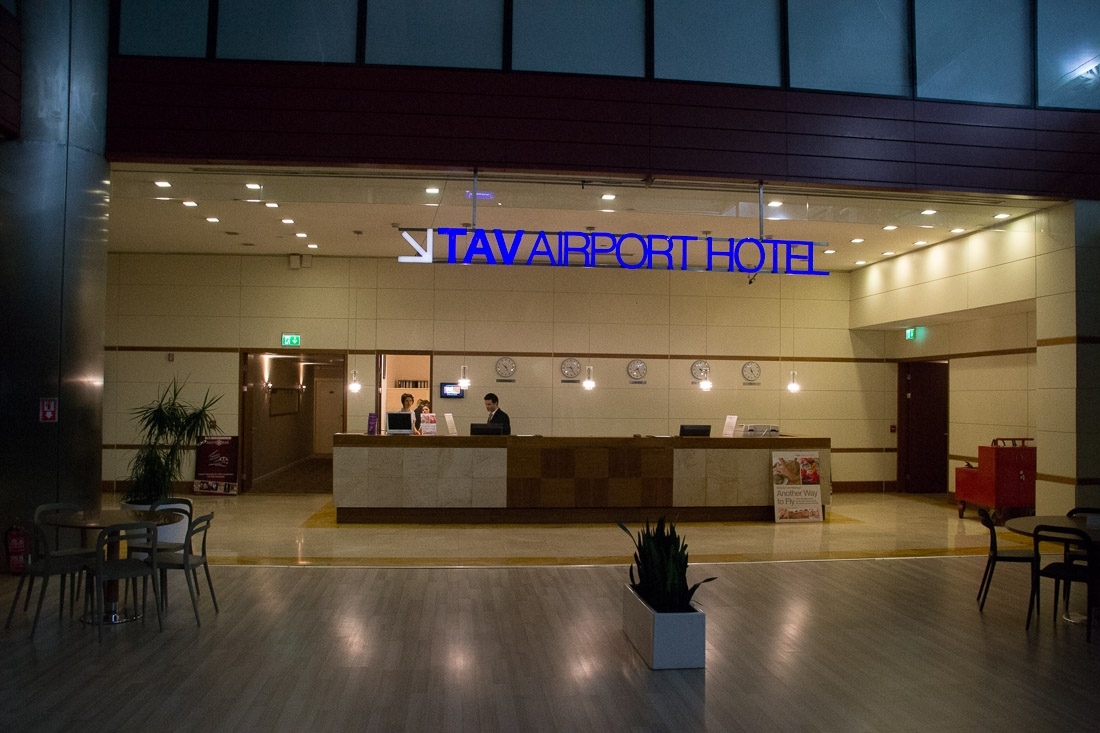 I was very pleasantly surprised by the hotel room. I was expecting very basic accommodations with nothing more than a bed. But it was just like a normal hotel room. There were two beds, probably a little smaller than double beds, lots of storage, a flat panel TV, a desk, and free WiFi. The windows were fake windows, with artificial light shining in them, but I think it did make the room less claustrophobic.

(Sorry, I only took pictures when we were checking out, so everything is in disarray. Booking the hotel was such a last minute decision that I forgot to take pictures when we first got there.) 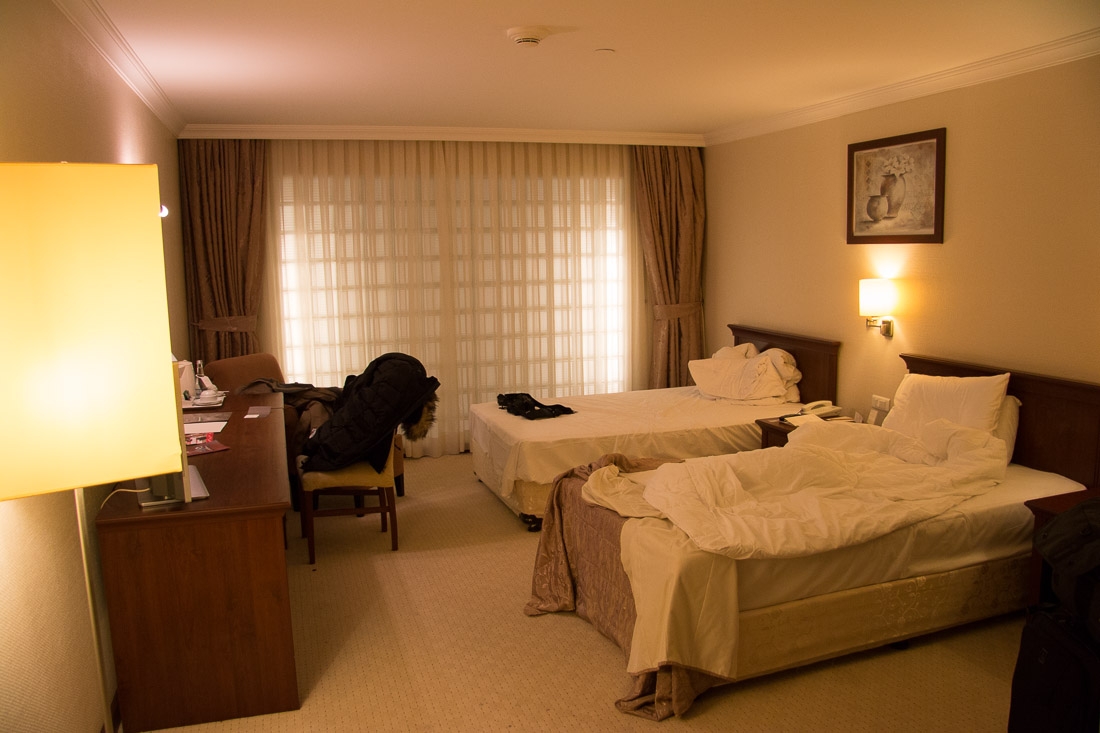 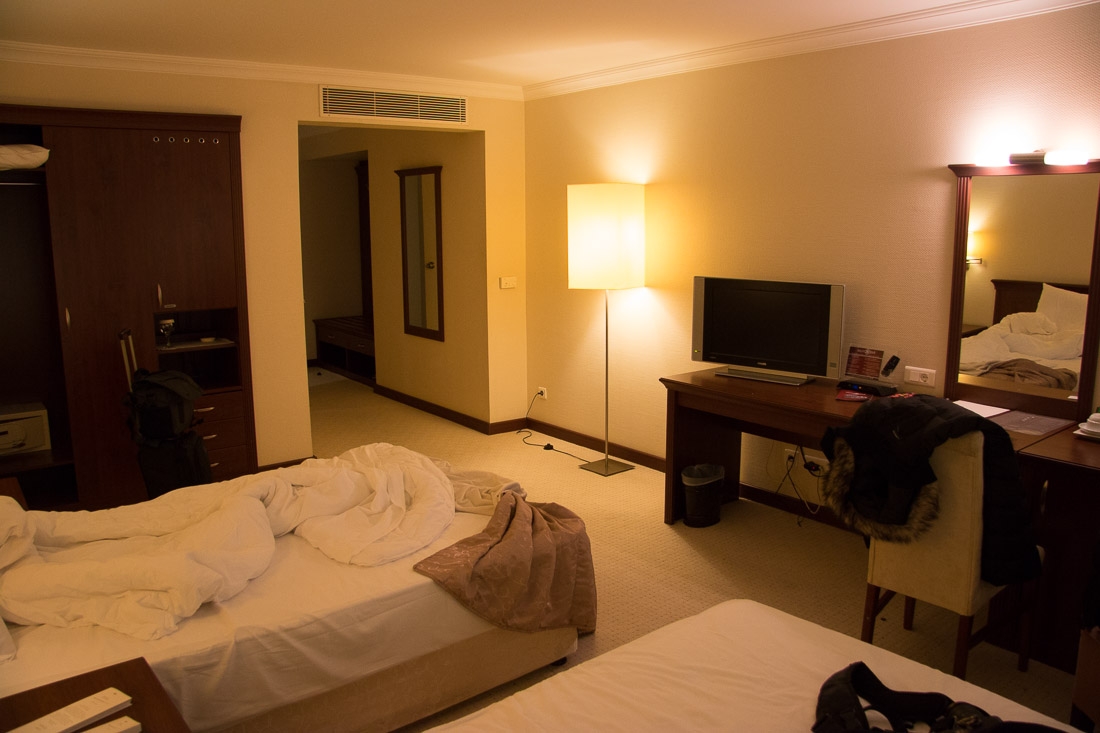 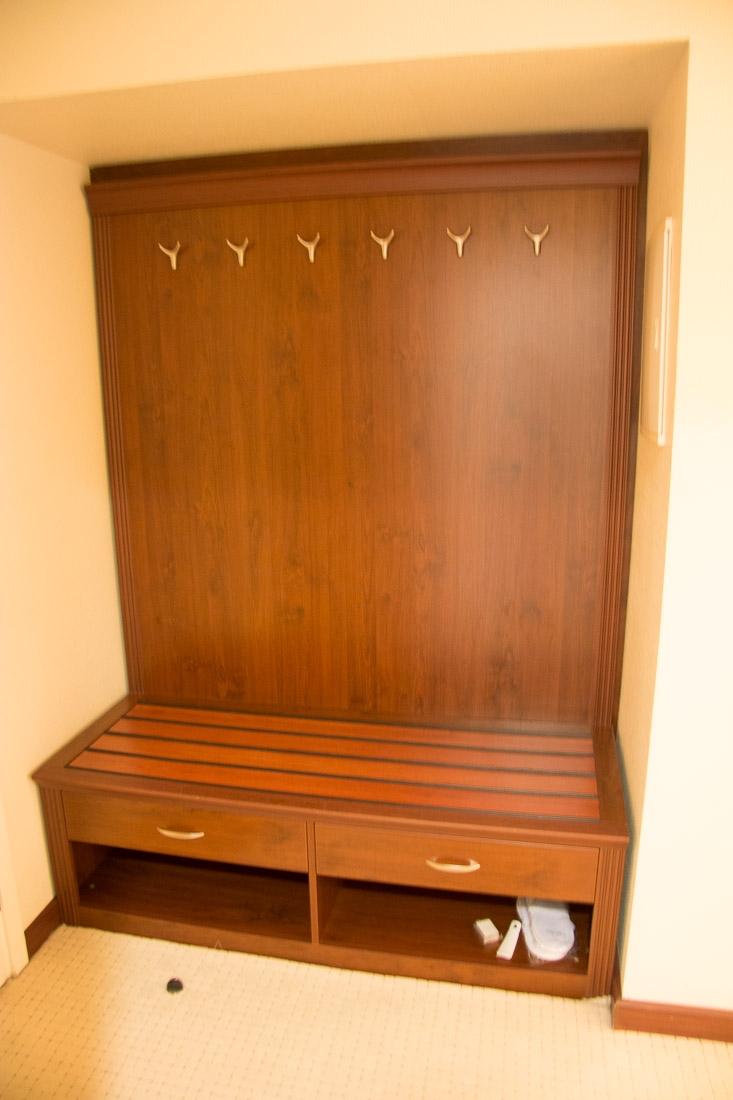 The bathroom was clean and spacious, and the showers had great water pressure. The toiletries were a welcome amenity since we had not been able to pack any liquids in our carry on bags going to Sochi. Even the towels were large and thick! 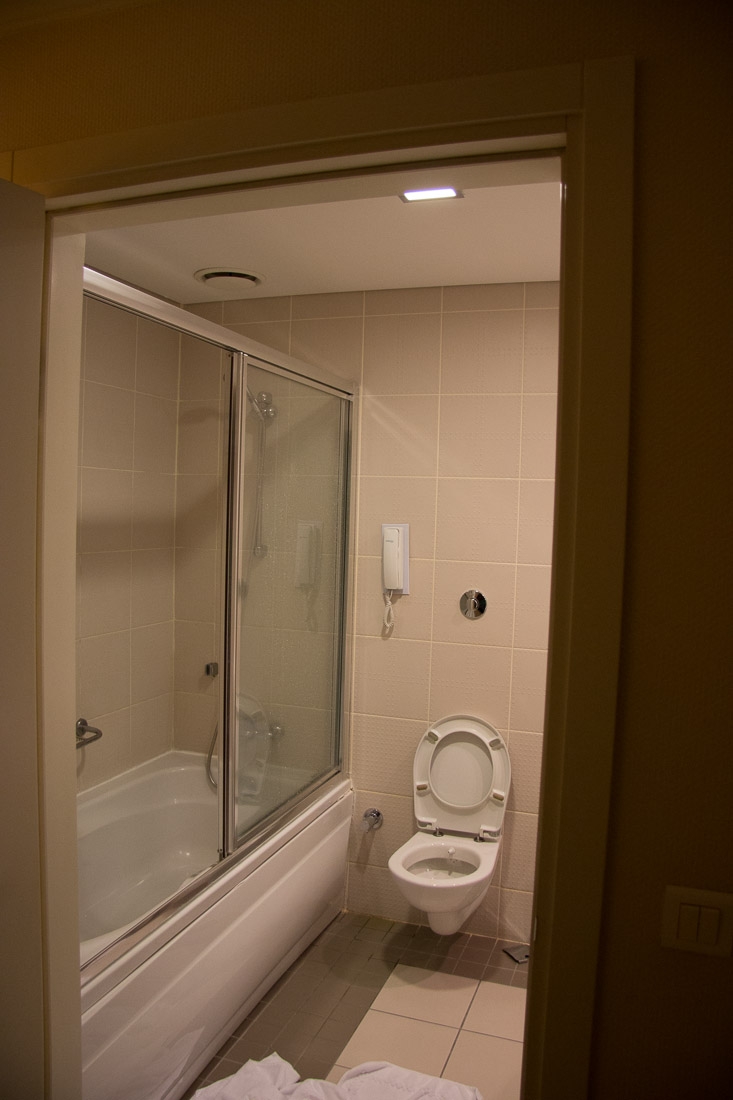 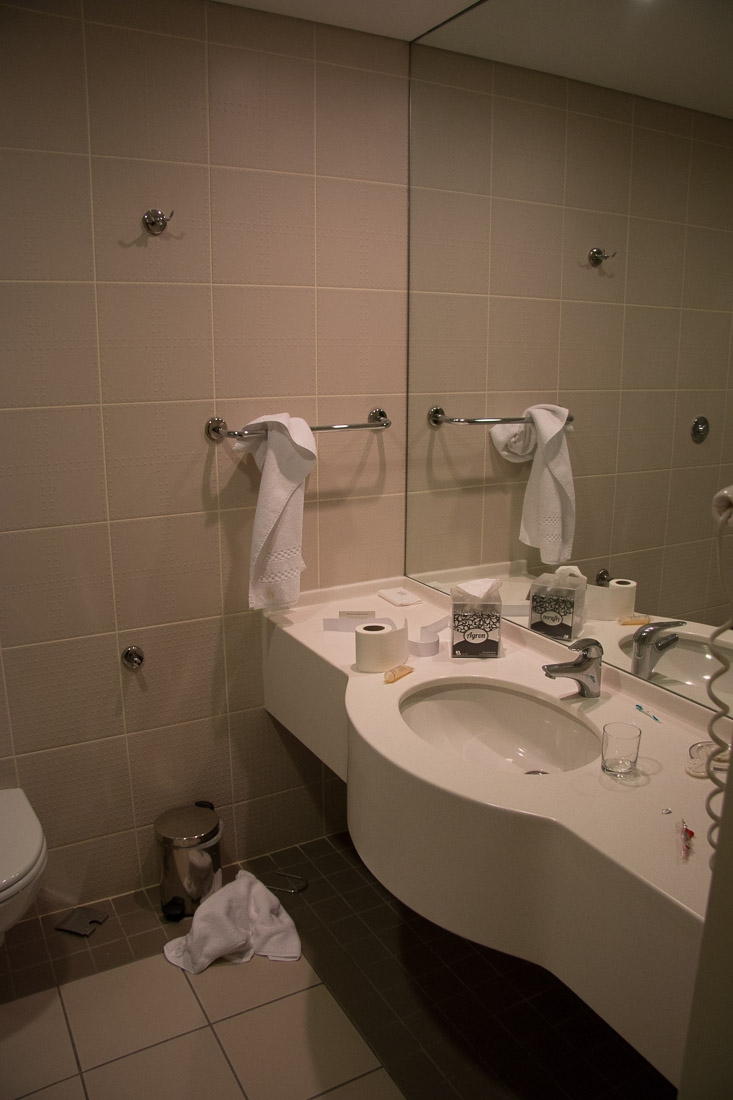 After we checked in, we both took about a two hour nap. We weren’t terribly tired because we had gotten a decent amount of sleep on the flight from Washington, but we knew we still had another very long day ahead of us.

After our nap, we walked around the airport and headed to the food court. The airport was clean and modern. But it was SO crowded! My goodness. 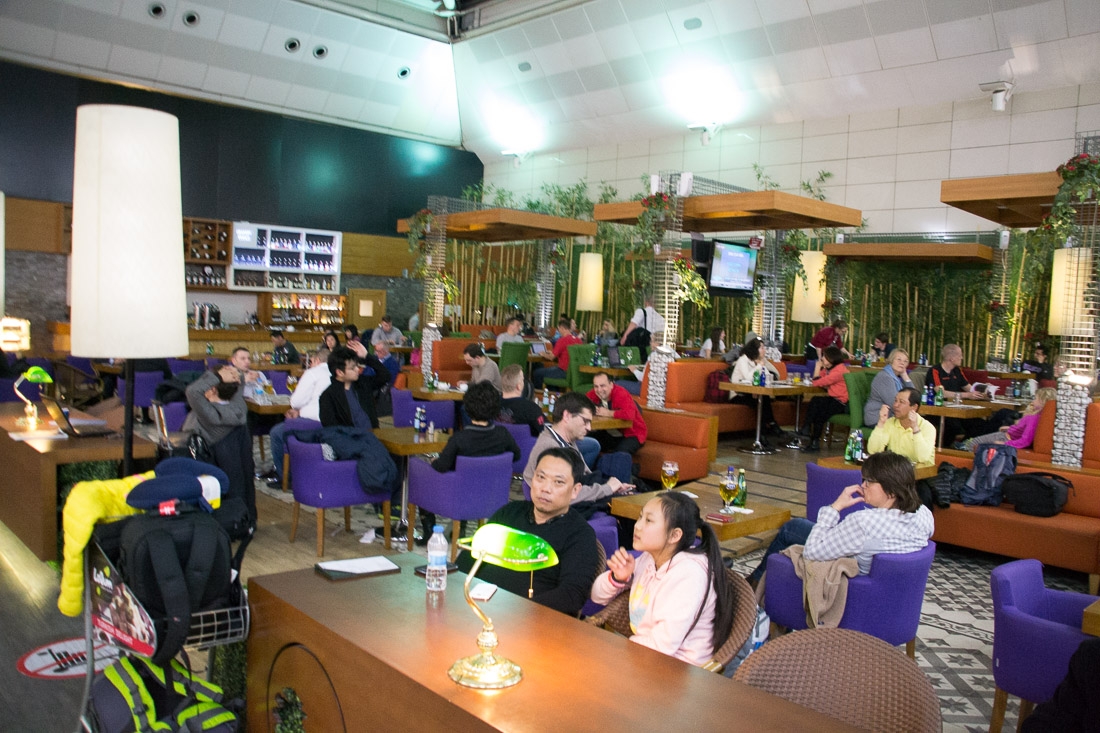 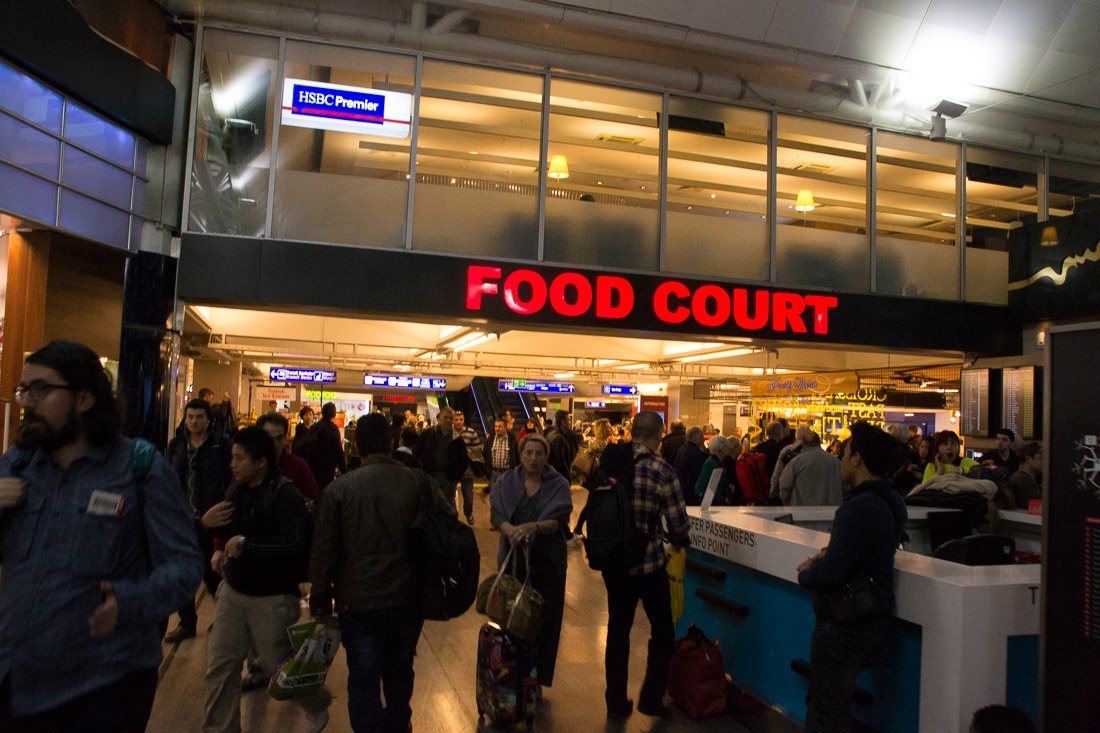 If I didn’t already know I was in Turkey, I swear this food court would have been indistiguishable from a food court at any mall or airport in the United States, complete with a Popeye’s, Burger King, and random Asian buffet place. 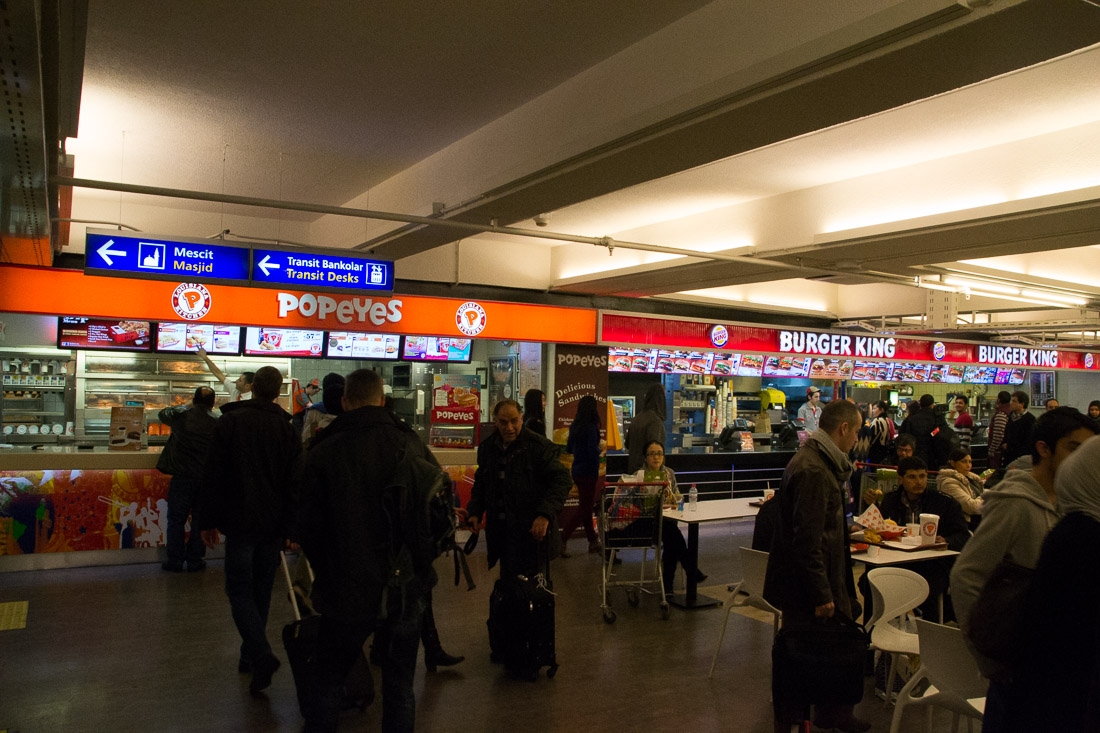 And even a Sbarro. 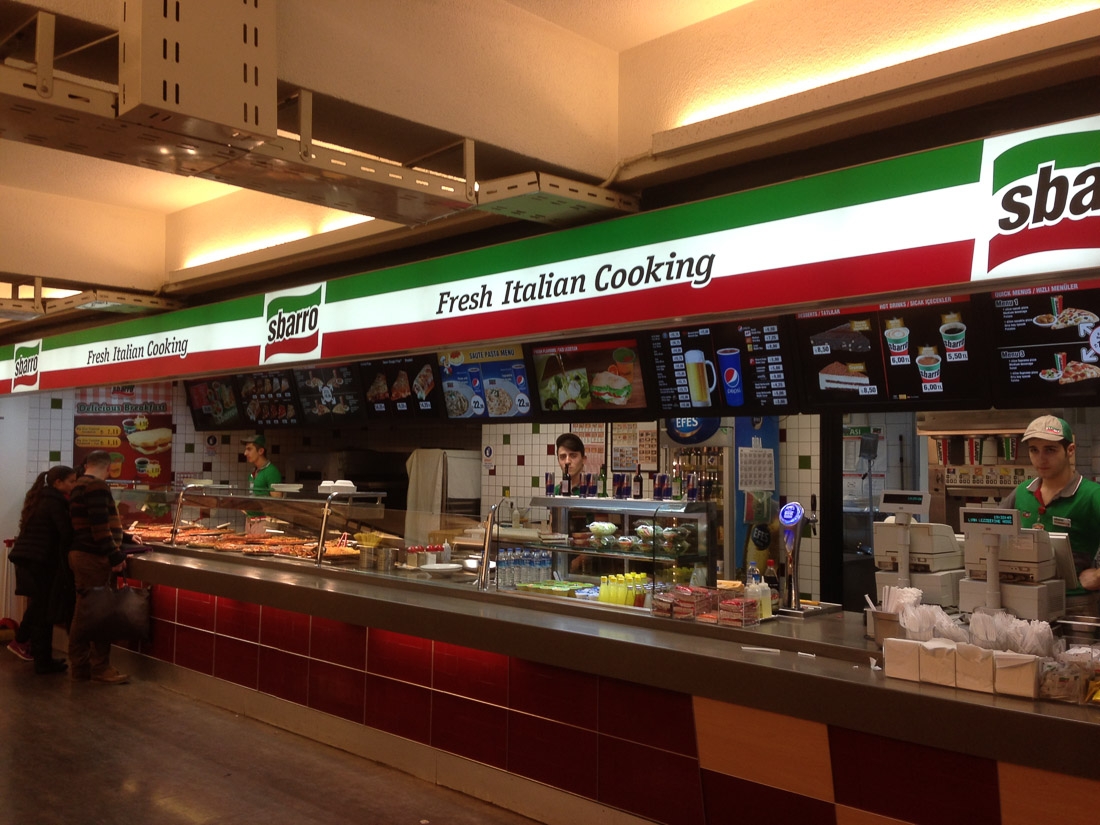 What can I say, it was no Turkish Airlines lounge food, but we had our fast food meal, and then even enjoyed some Turkish Ice Cream. 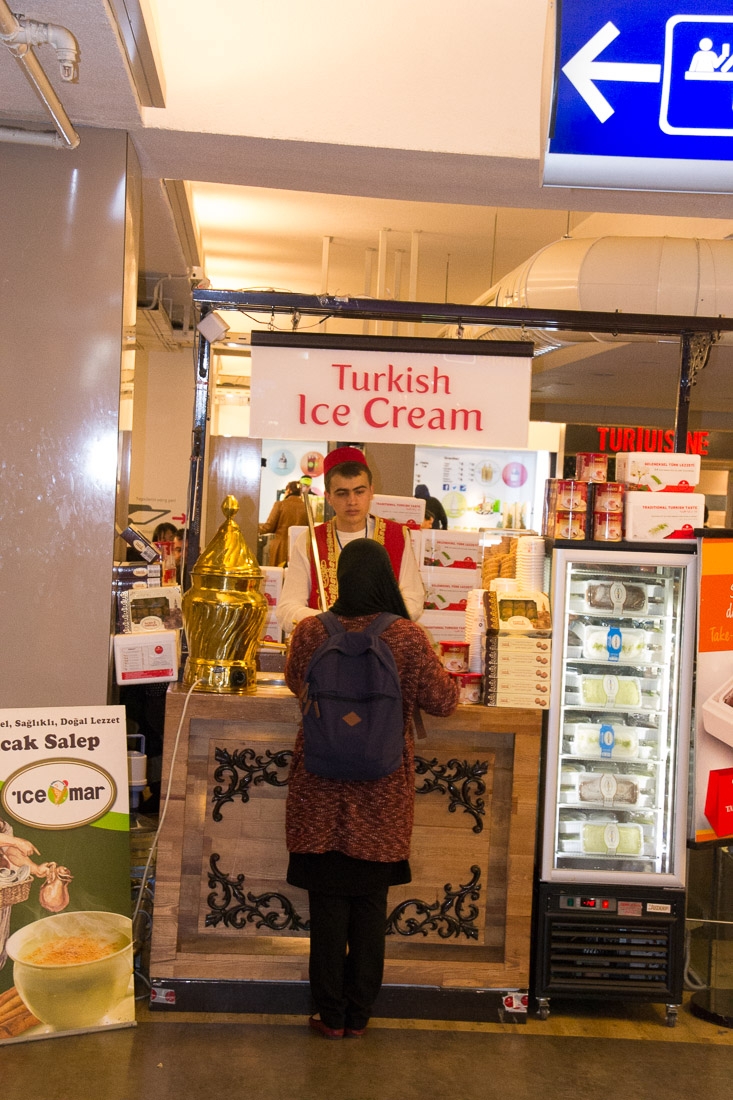 We headed back to the hotel. We showered and then tried to take another nap. It took us a while to fall aslep this time since, again, we really weren’t that tired, but we were anticipating another long 24 hours ahead of us.

We both slept for another 60–90 minutes, and then it was approaching the end of our 4–6 hour window in our hotel room. We packed up our things and headed to the gate for our flight to Sochi.

We both decided to have another light snack before we boarded, and I just grabbed a small tomato mozzarella sandwich from a kiosk vendor near our gate area.

Once boarding was announced around 11:30PM for our 12:15AM flight, we stood in line to board a bus. A gate agent checked our passports and checked that we had the proper Russian visas. While we were waiting in line, we met an American woman in her 60’s who had been to every Olympics (winter and summer) since 1984! There was also a handful of athletes on our flight, although it wasn’t clear what country they were from. They had a small media crew interviewing them at the Istanbul airport.

The bus ride to our plane seemed to take forever. Once we finally got there, we boarded through a rear door. 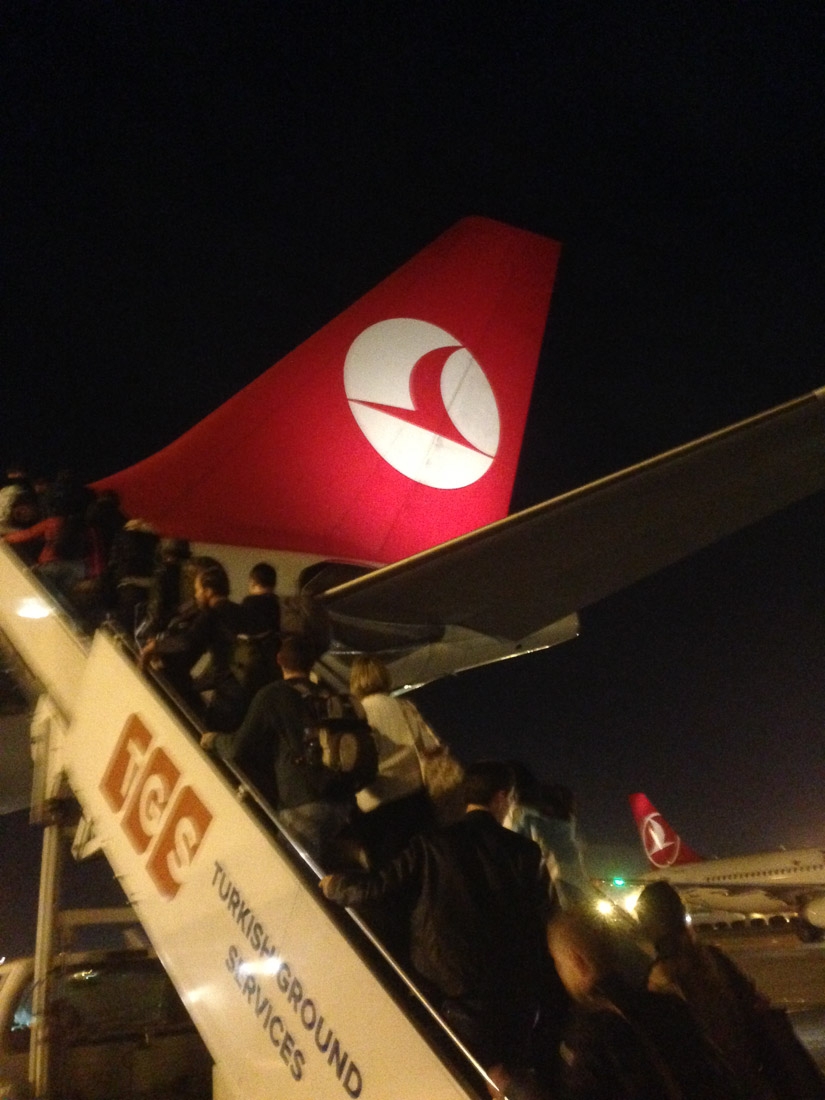 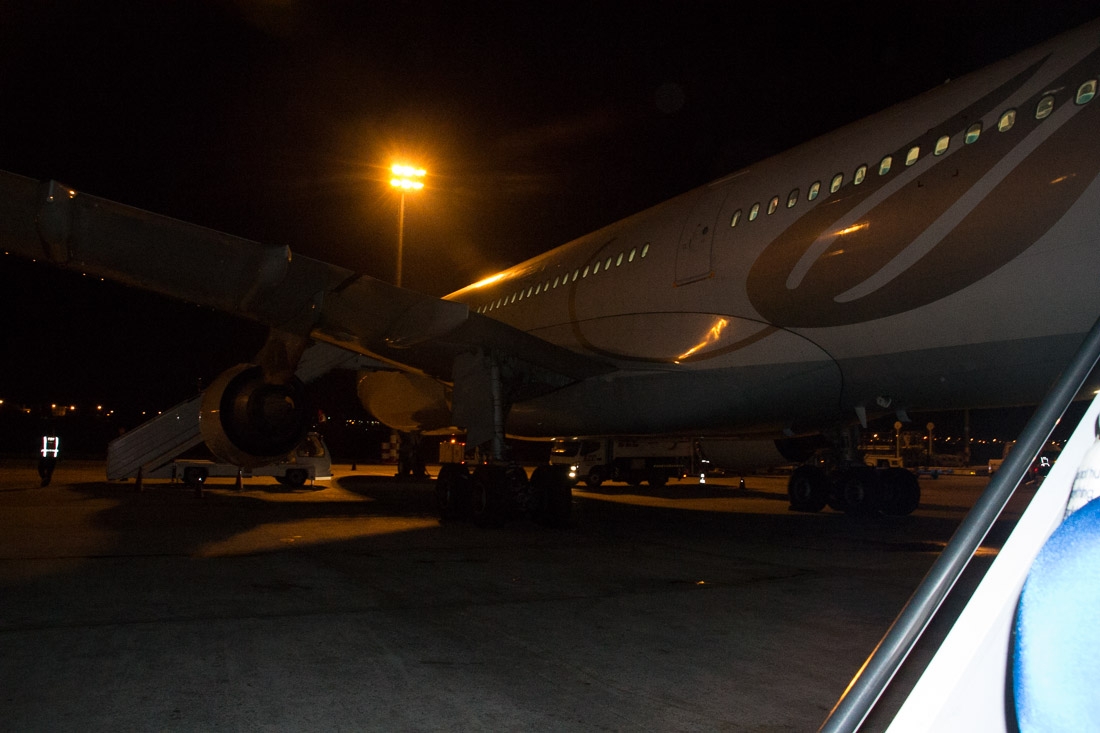 My sister and her family, who had taken this same flight just 48 hours earlier, told me that they taxied for nearly 90 minutes after the plane’s doors closed. Nearly the same amount time the entire flight to Sochi took!

I’m glad to say that after our plane’s doors closed (on time), we were airborne in less than 10 minutes. Whew!

The flight time to Sochi was barely an hour. The passengers on board were abuzz with excitement!

As we were landing in Sochi, we could see Olympic Park! (Forgive the crappy cell phone pictures, I wasn’t anticipating such good views). 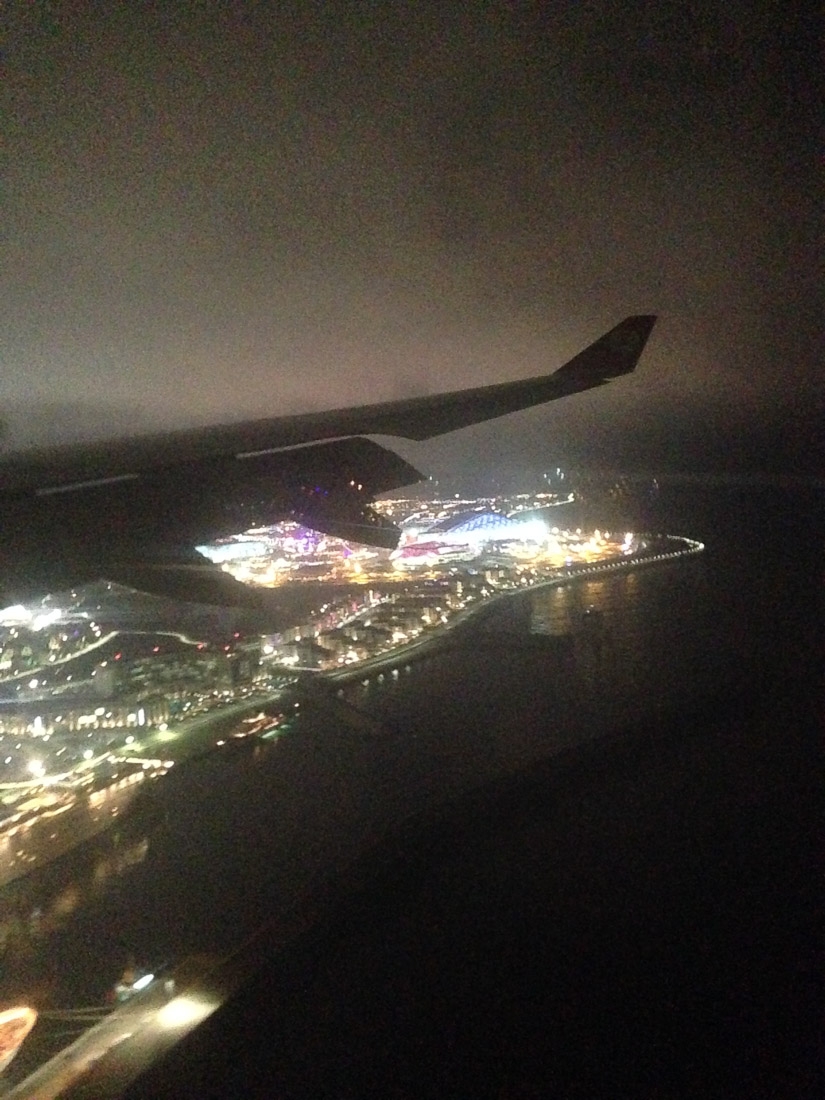 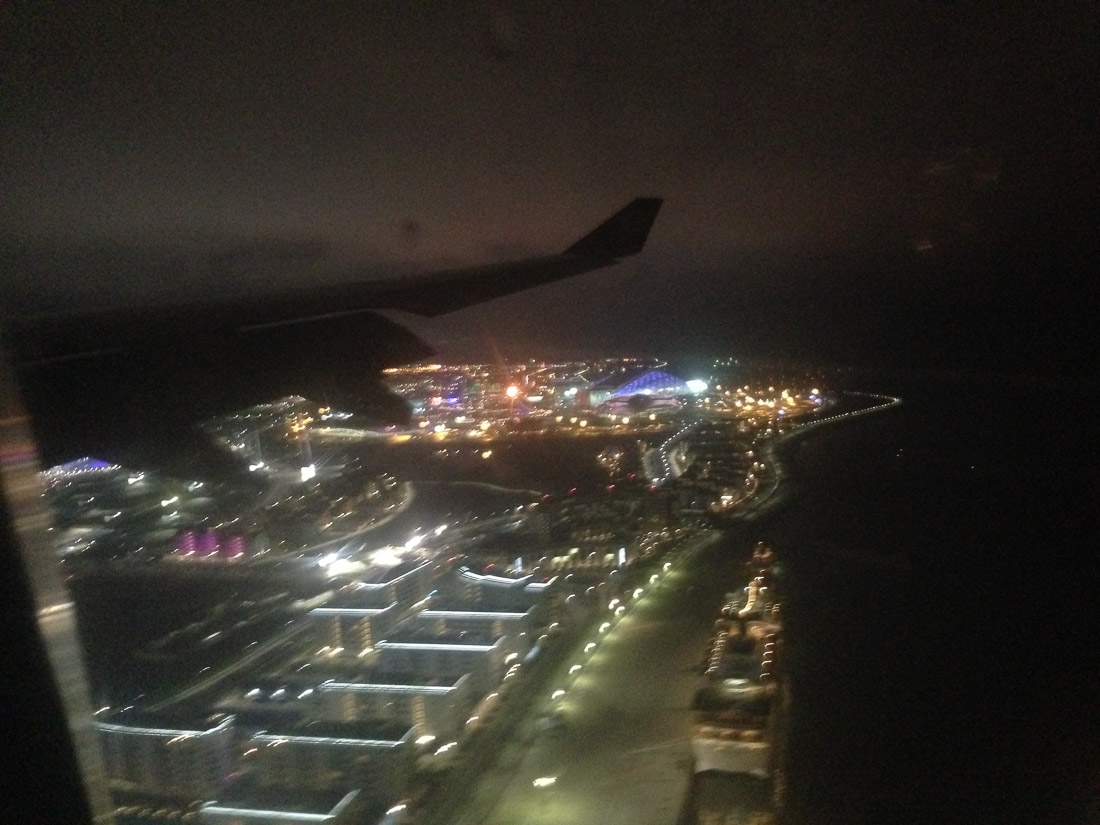 Next up, I’ll talk about our crazy Sochi accommodations drama!

**I’ve read several variations on this minimum time standard, ranging from 6 to 8 hours. There’s no information about it that I could find on the Turkish Airlines website.