After our time in Moscow, it was time for the next leg of our trip, St. Petersburg. We took the high speed train from Moscow to St. Petersburg, and unfortunately we had a very bad experience at the Moscow train station when somebody tried to steal our luggage (I’ll tell the full story in the next post in this trip report series).

But first, I wanted to review our hotel!  We stayed at the W St. Petersburg. With the exception of one or two customer service issues, we had a fantastic stay. The hotel is centrally located and within walking distance of many of St. Petersburg’s famous sites. The room was a decent size by European standards, and it had an amazing bathroom.

The W St. Petersburg was 12,000 SPG points per night. We used 36,000 points for our three nights there, making our stay entirely free. And since I’m SPG Gold, we even had free WiFi! (Typically there is a charge at the W). We had earned most of the points needed from the SPG Amex Personal card, which Ken had signed up for several months before the trip.

They were very efficient in getting us our visa support letters (required for Americans when applying for a Russian tourist visa) prior to our departure!  They responded less than a day after our request.

We stayed in the “Wonderful Room” – King Size Bed. 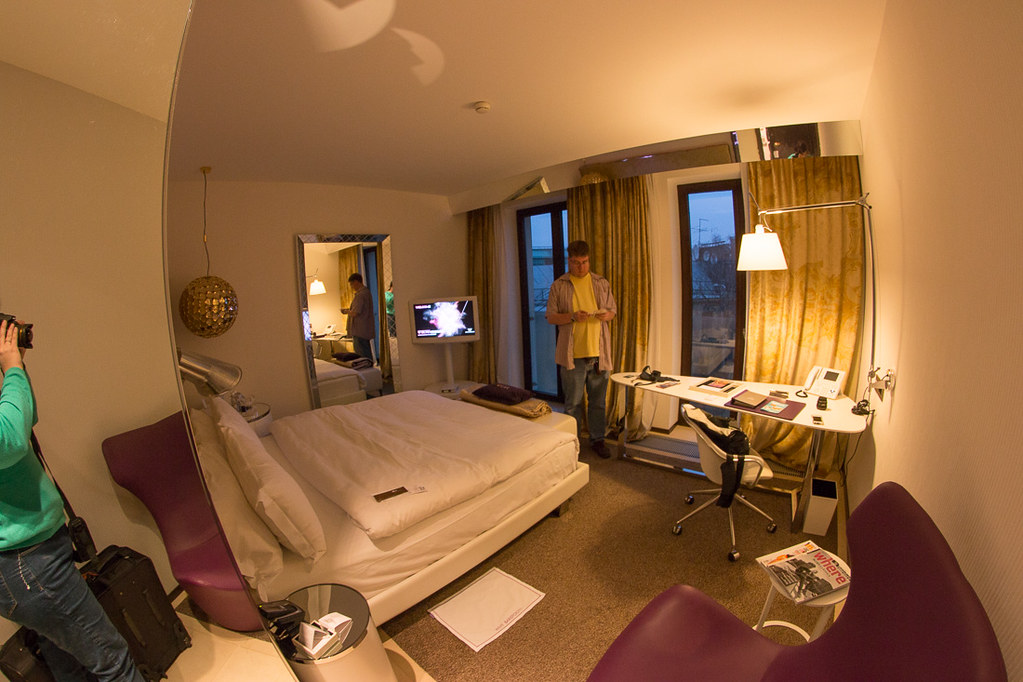 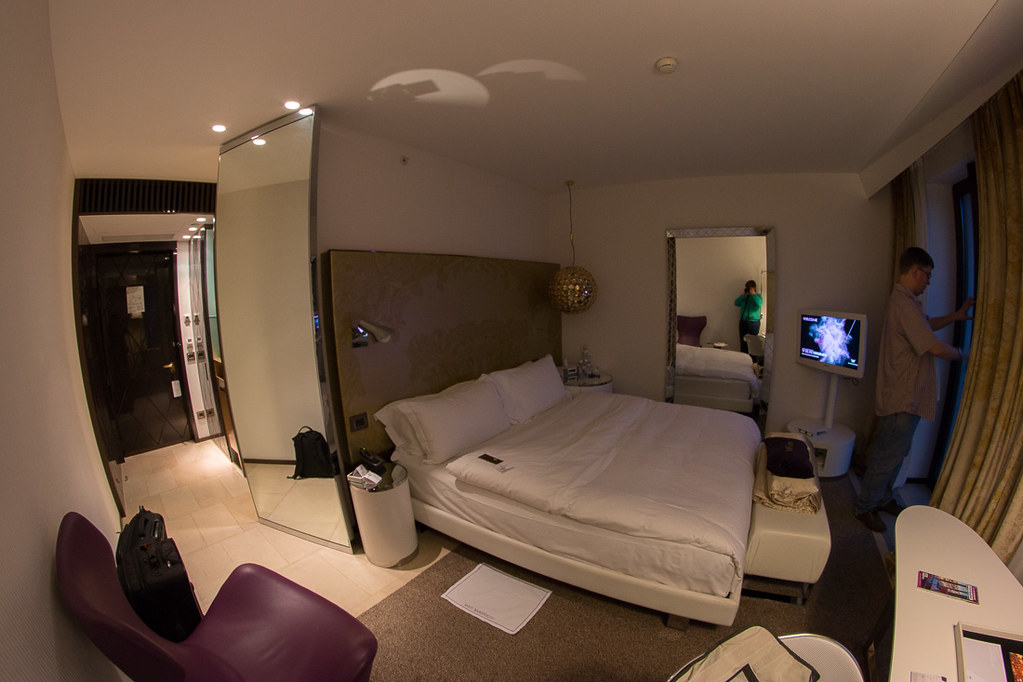 There was a large desk, which was fantastic as a landing zone for all our stuff, like cameras, chargers, etc. The desk also had table-height electrical outlets, both on the desk and to the right of the desk on the wall. 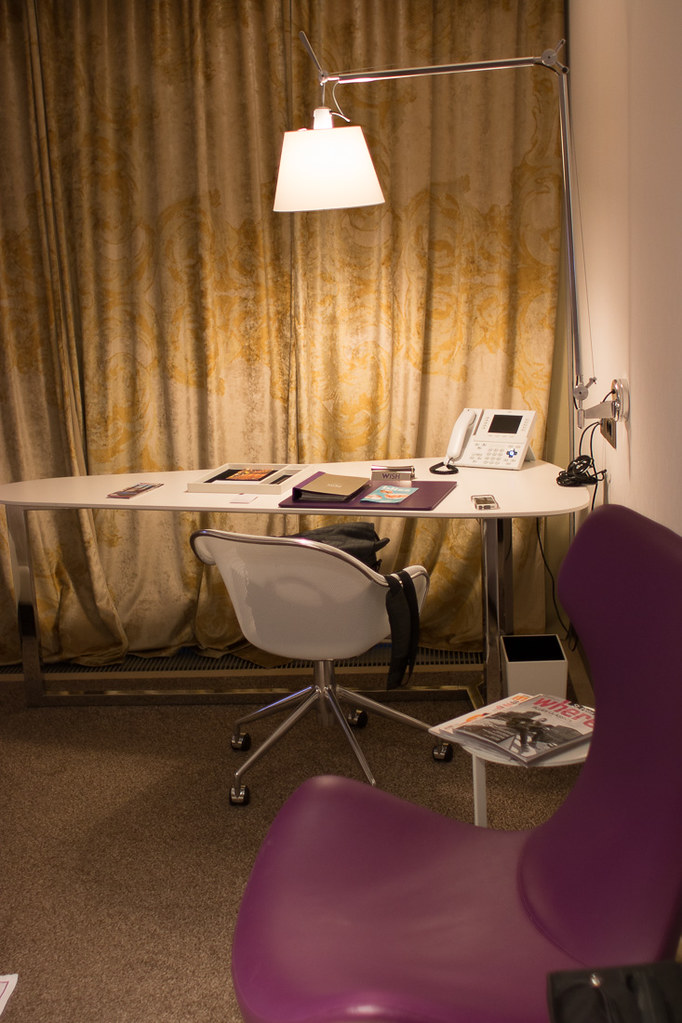 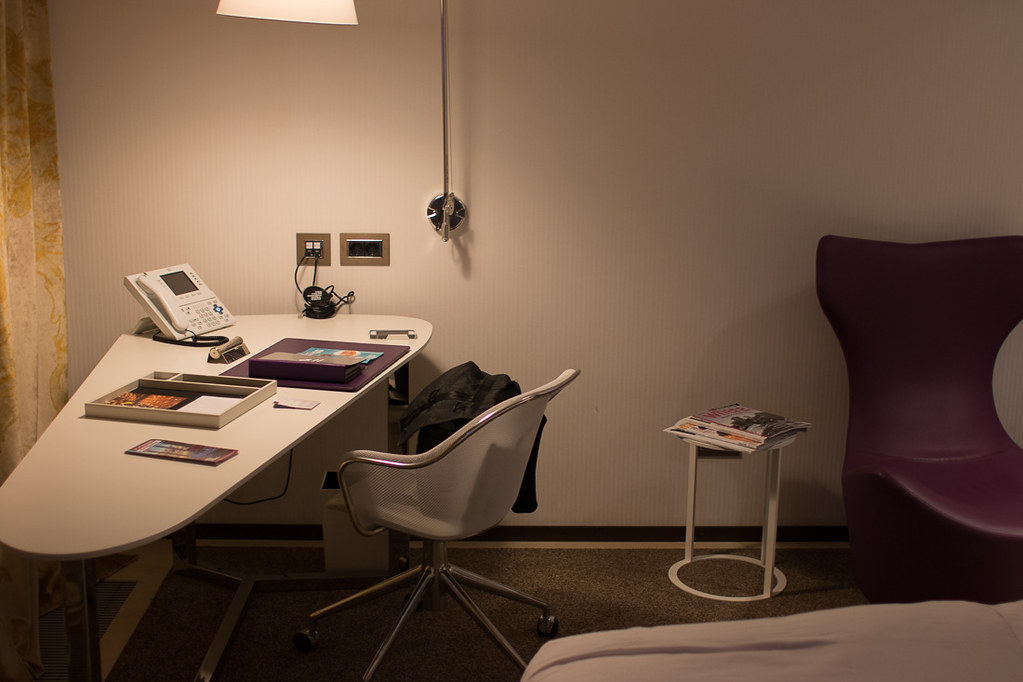 Besides the desk chair, the only other “sitting” furniture available was this trendy looking piece, which actually was pretty comfy. 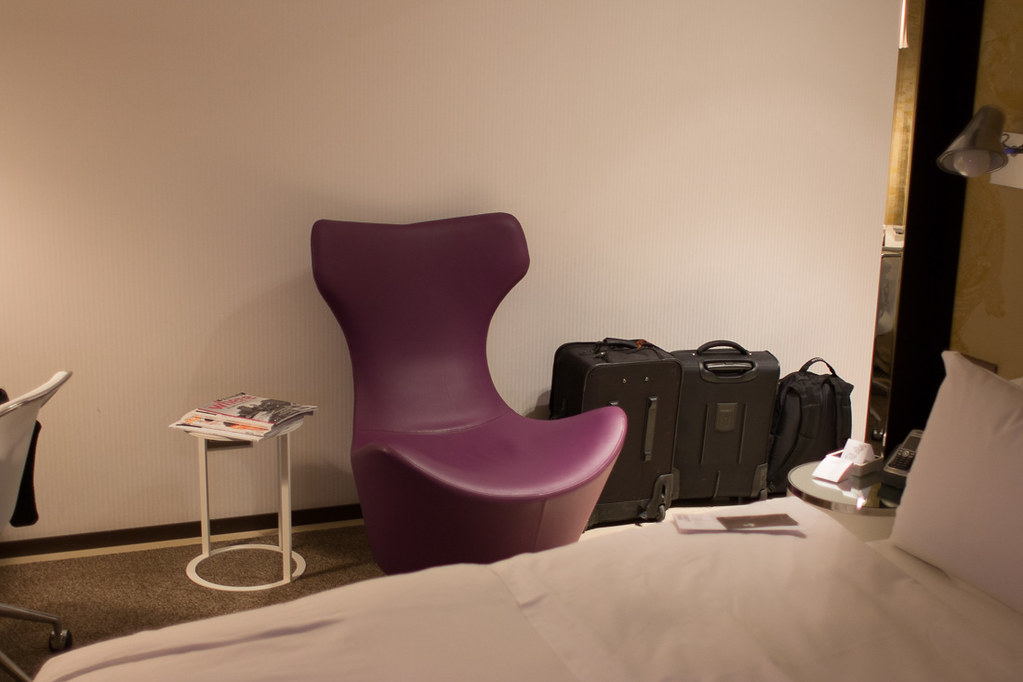 The bed was plush and amazing. Great for stretching out after long days of touring! 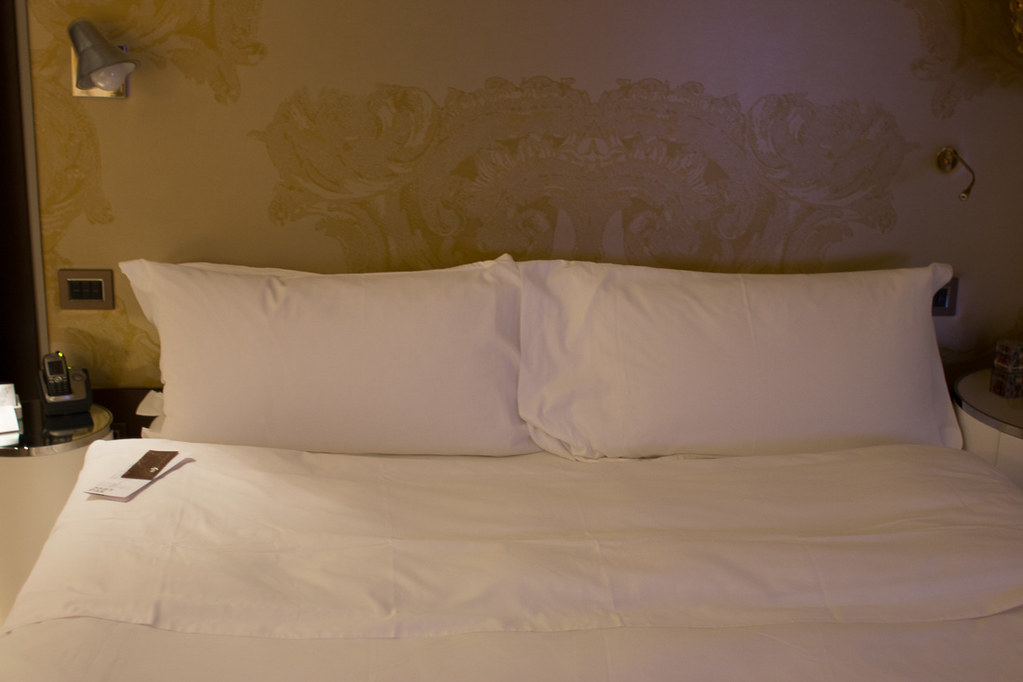 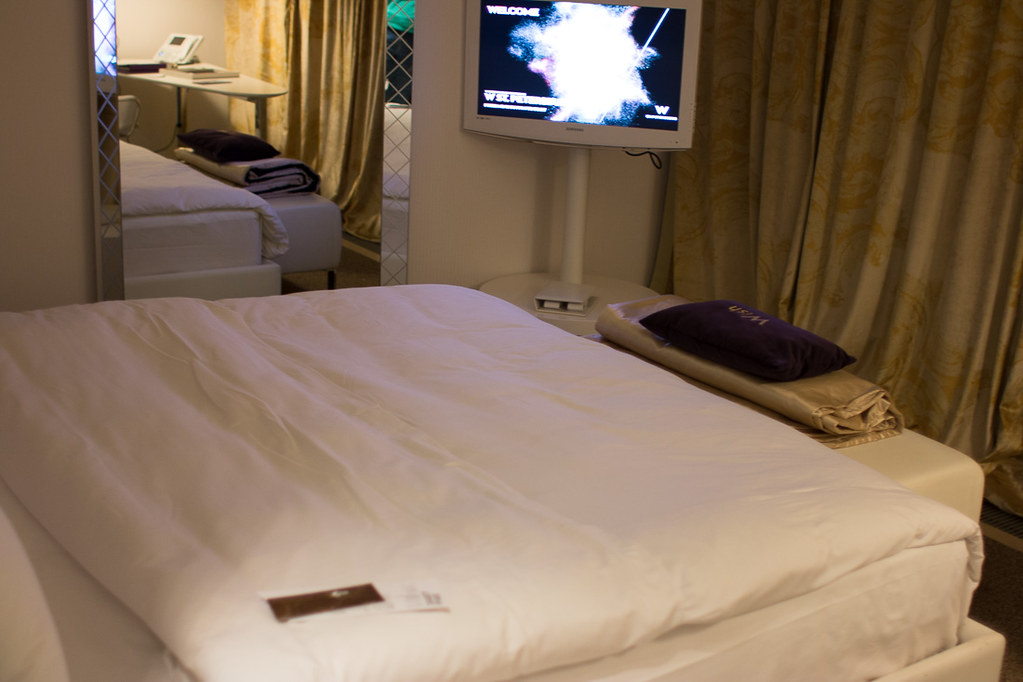 It is worth pointing out that the nightstand on the left was comically tiny, but it was better than nothing! 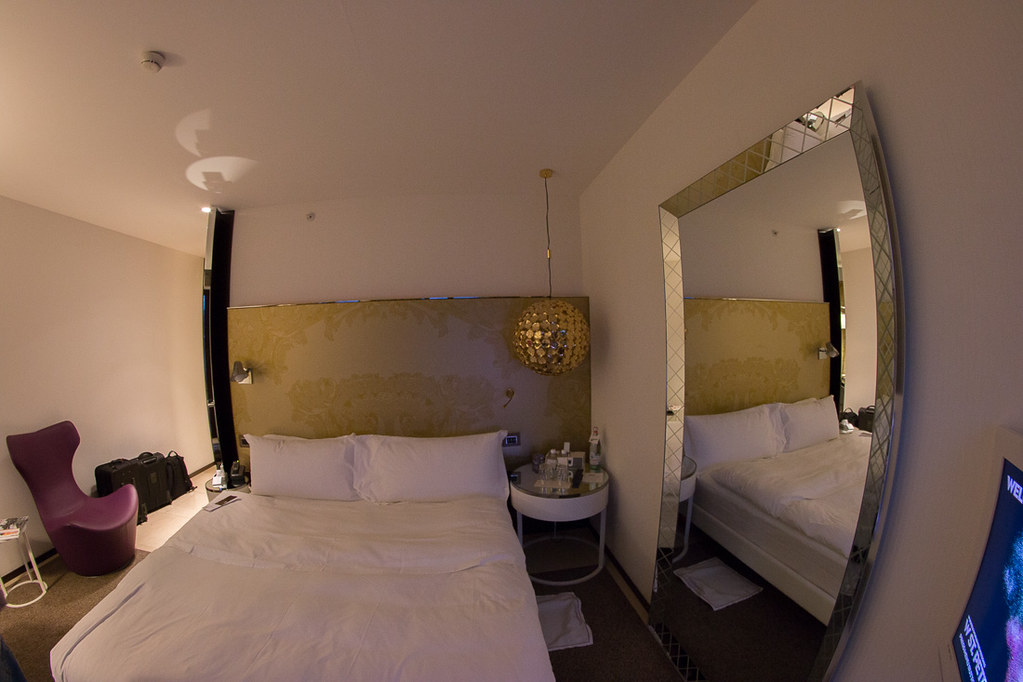 There was a flat panel TV, probably about 32 inches, in the corner of the room. 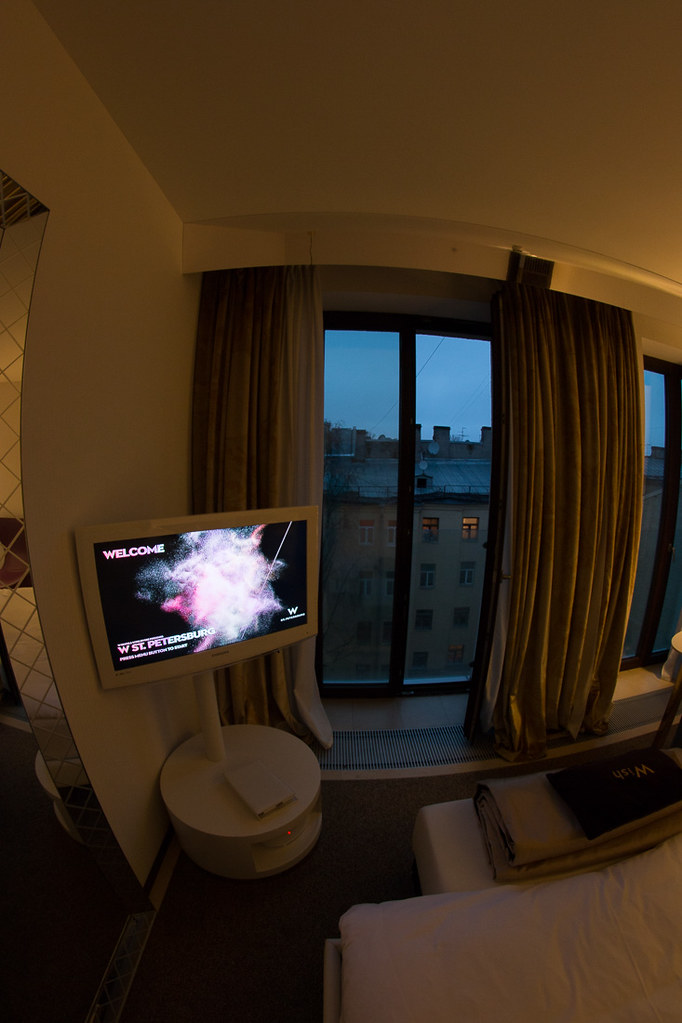 It was on that TV that we watched news coverage of the events starting to unfold in Ukraine. We started to get worried calls and messages from family and friends about the violence. We just said, “We are SO far away from the Ukraine right now, probably close to 700 miles! There’s no need to worry!” And naively, we said, “Anyway, that’s the Ukraine, what does it have to do with Russia besides being relatively nearby?”

My oh my, that fell apart fast and obviously we learned pretty quickly how what was happening in the Ukraine was, in fact, related to all things Russia!

The bathroom was on the left, right after you walked into the hotel room. 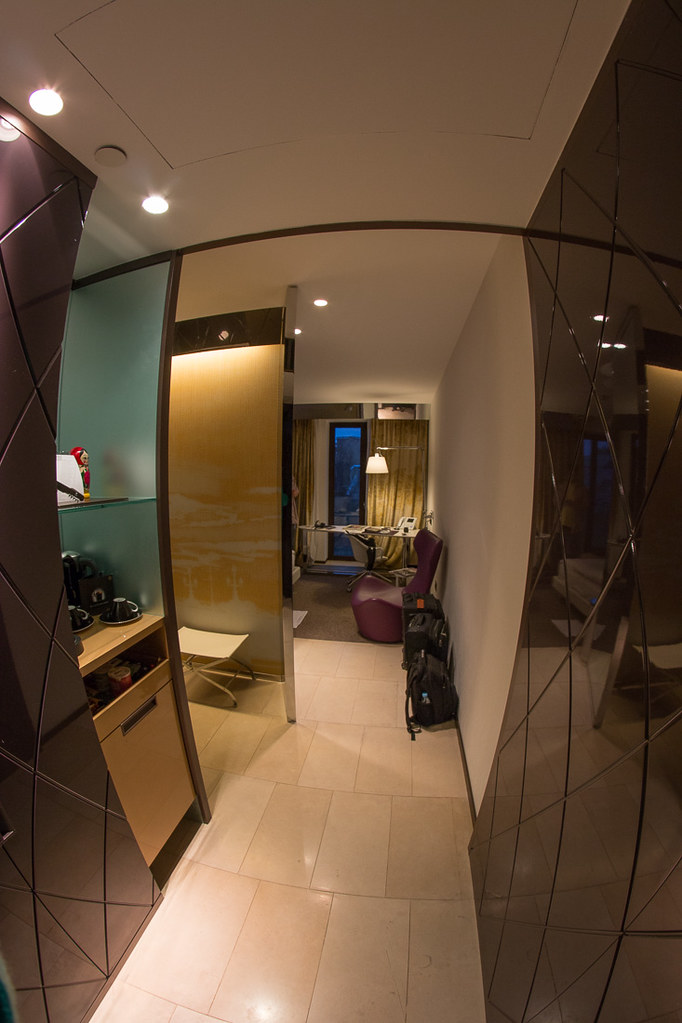 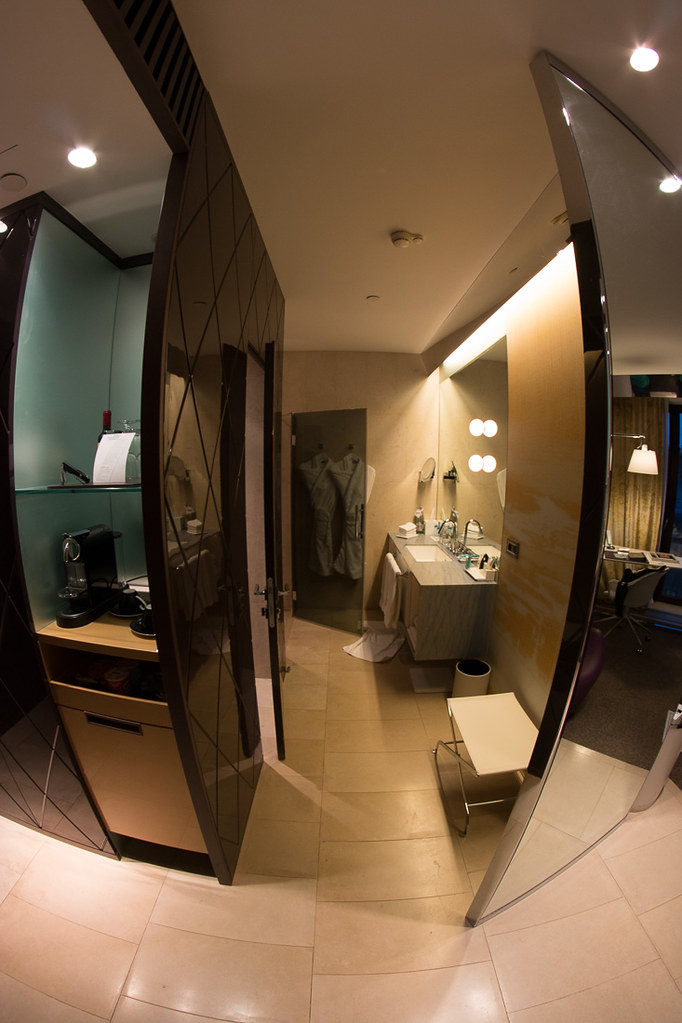 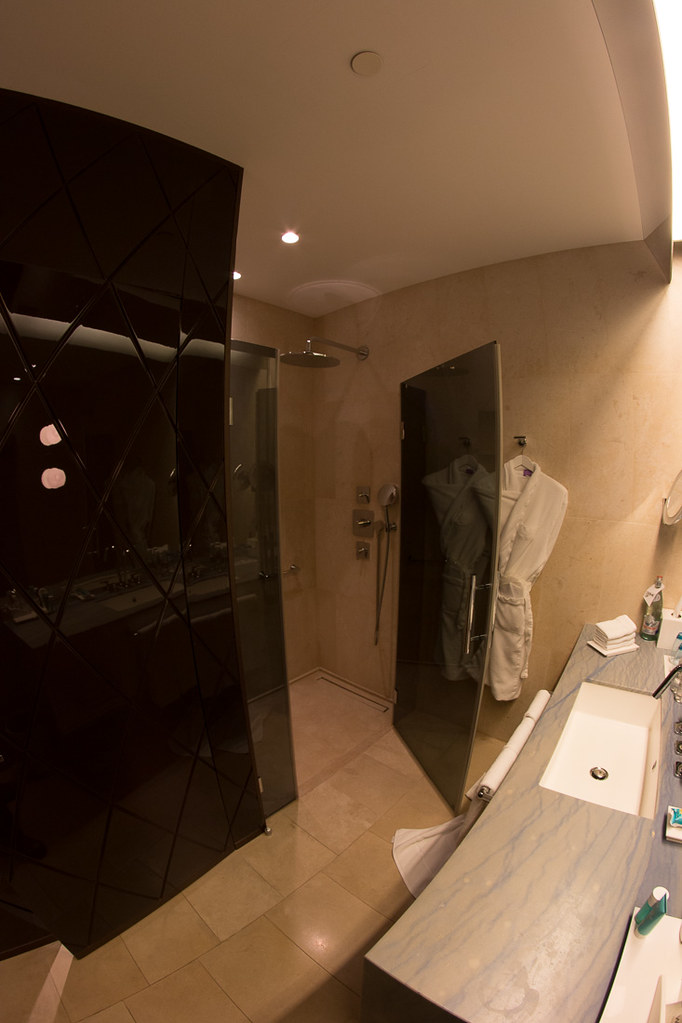 The shower was spacious and had great water pressure. There was no bathtub, but that’s not a complaint. (Even though I had baths in the fantastic tub at the Park Hyatt in Moscow!)

There was a rain shower head, plus a separate handheld sprayer if you needed it. 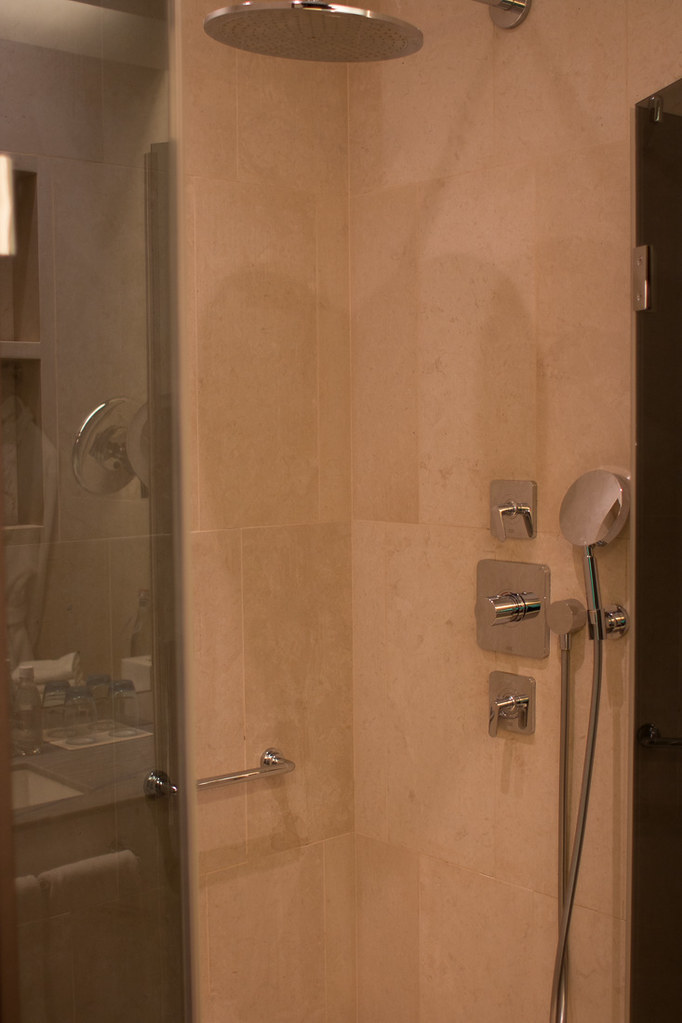 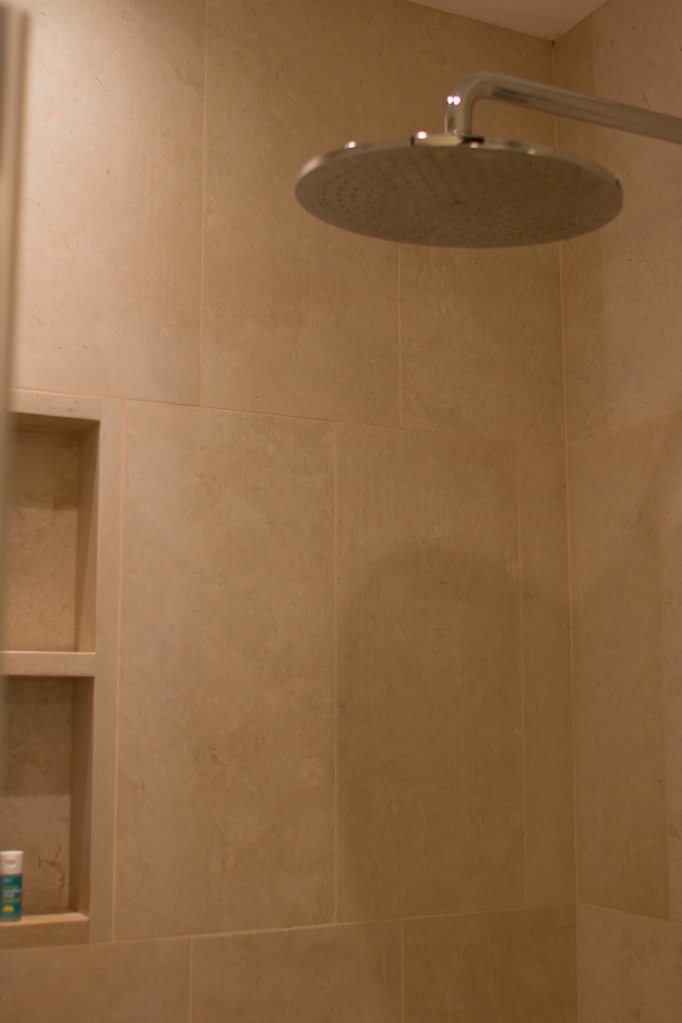 The shower had a glass door, which I’m always appreciate. I’m not a huge fan of the recent trends of only having like a “half” glass door for showers, much like what we saw during our stay at the Andaz in New York. 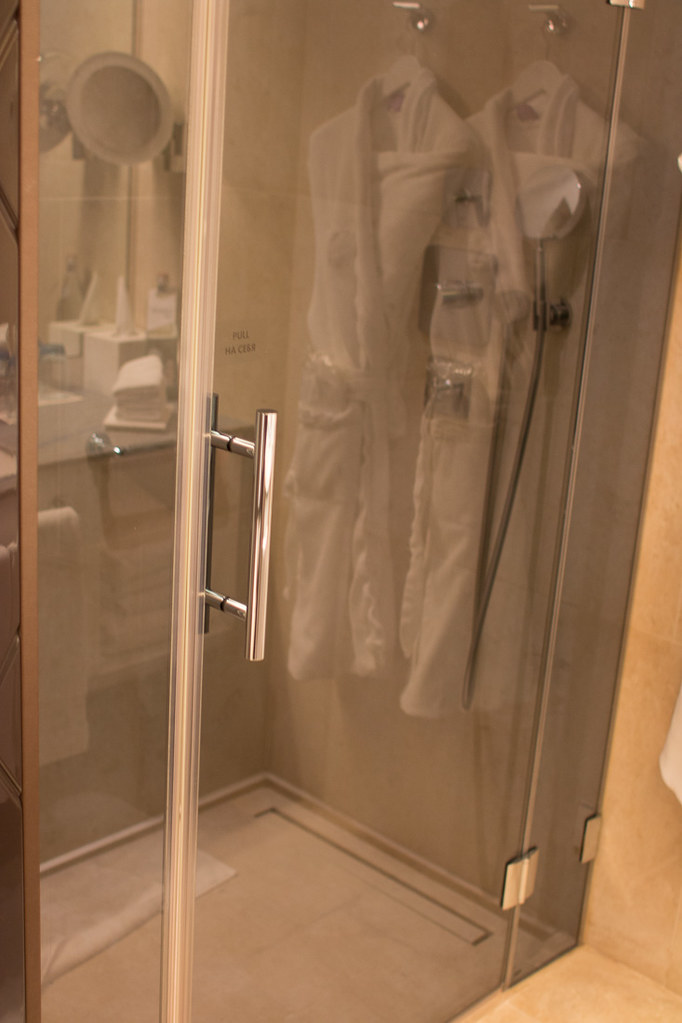 There were two plush robes available, and the sink had plenty of countertop space. 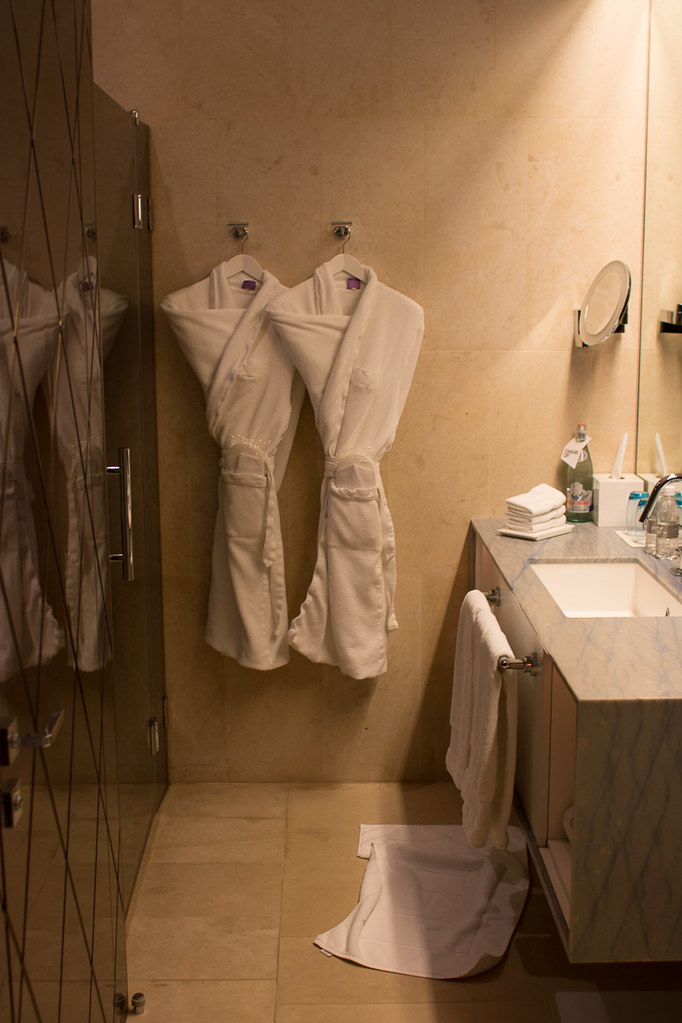 Also a big plus was the separate toilet stall in the bathroom. 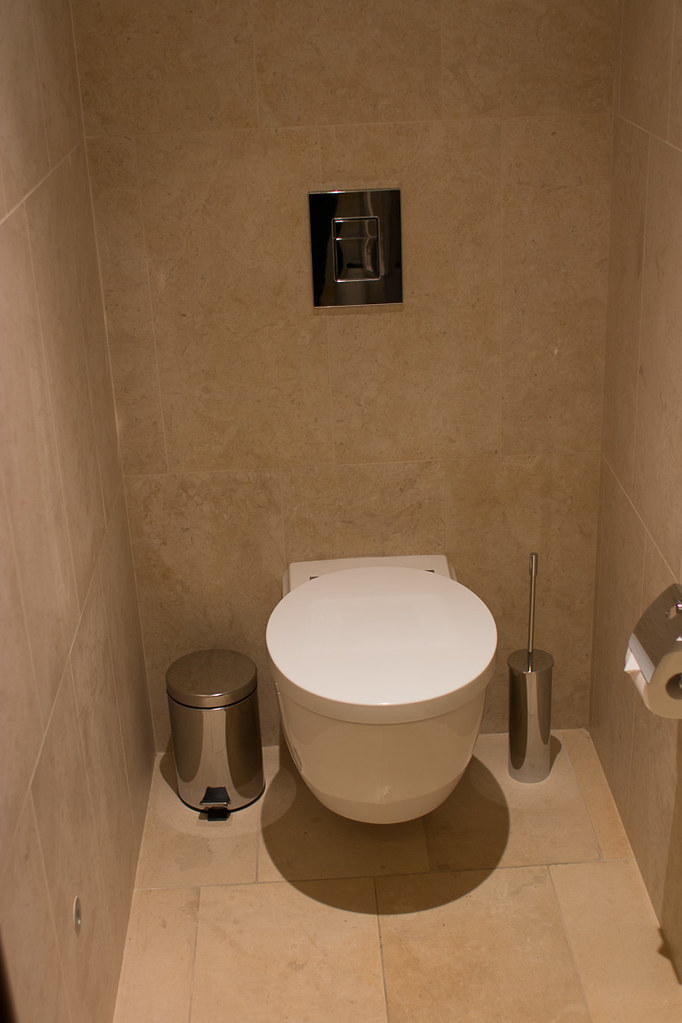 The W was on a quiet side street, and the entrance was very unassuming. (See the white “W” about halfway up the photo? That was the entrance.) 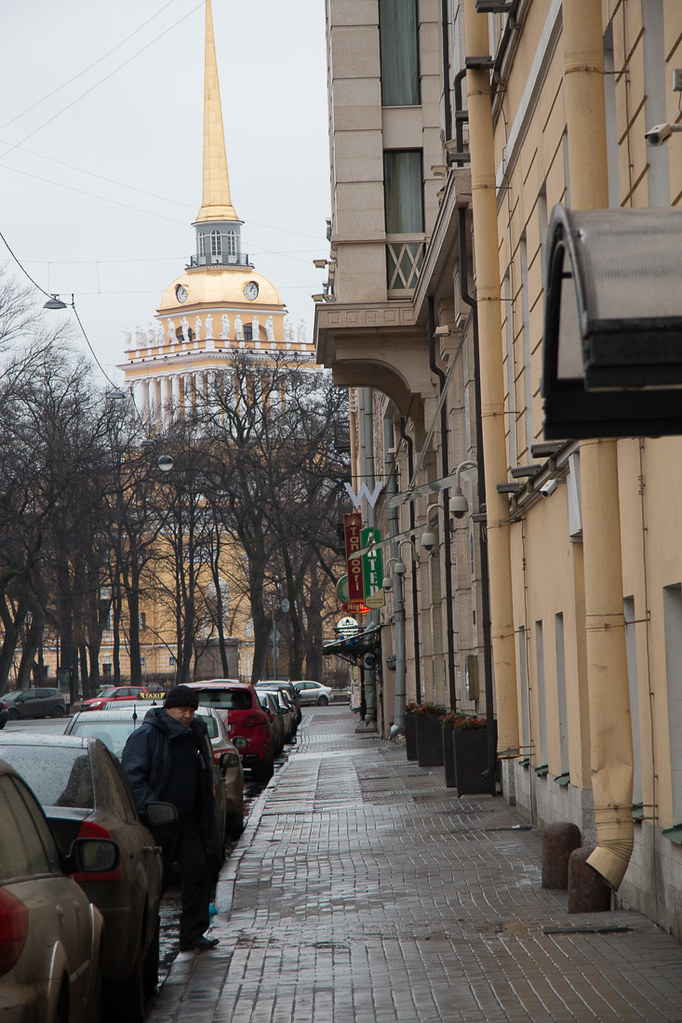 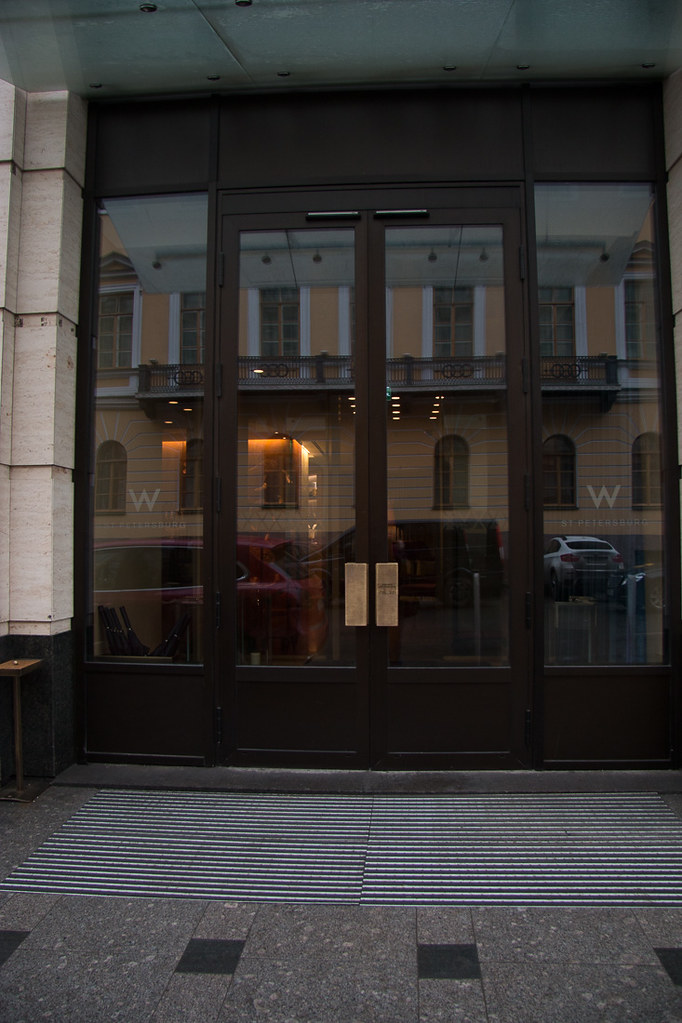 There were umbrellas just inside the entrance, available to guests on rainy days. (Which there are many in Russia in winter!) 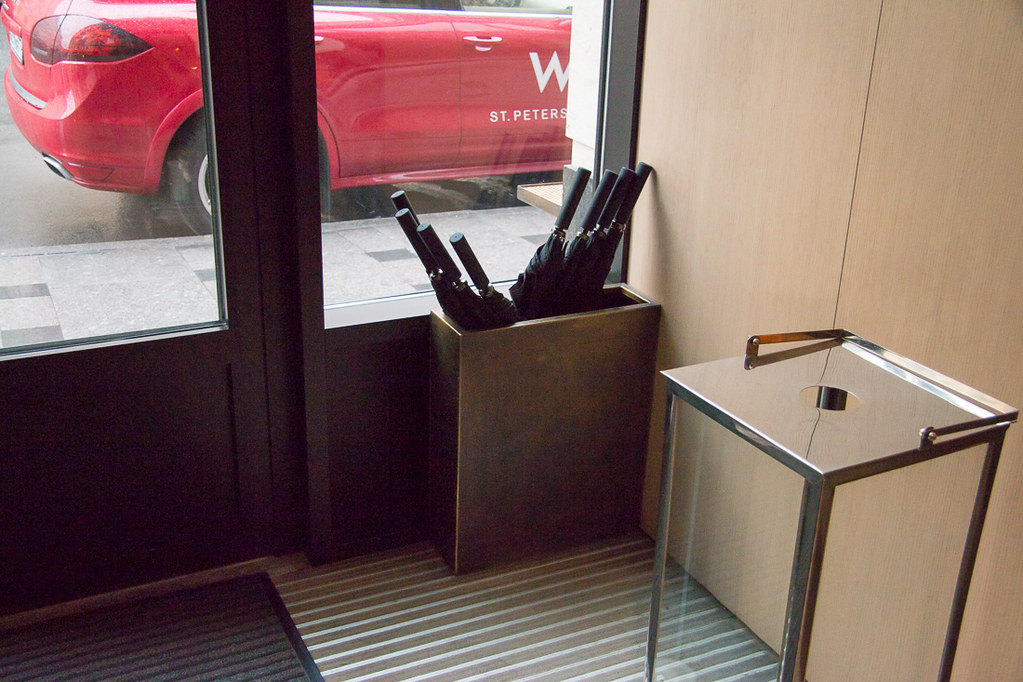 The lobby was really beautiful, and had plenty of seating areas. 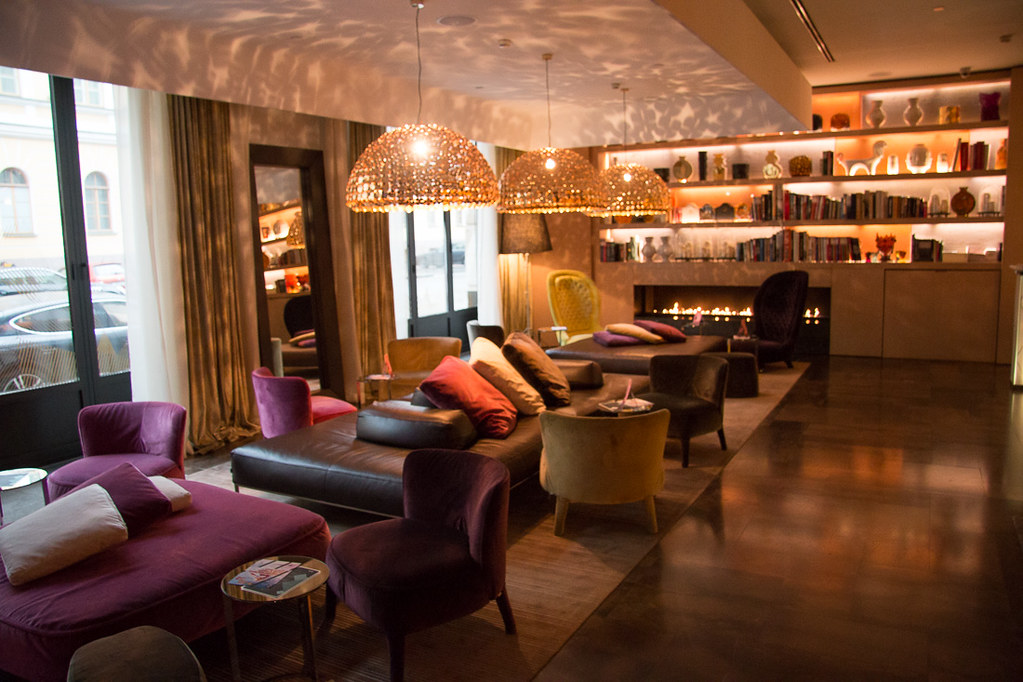 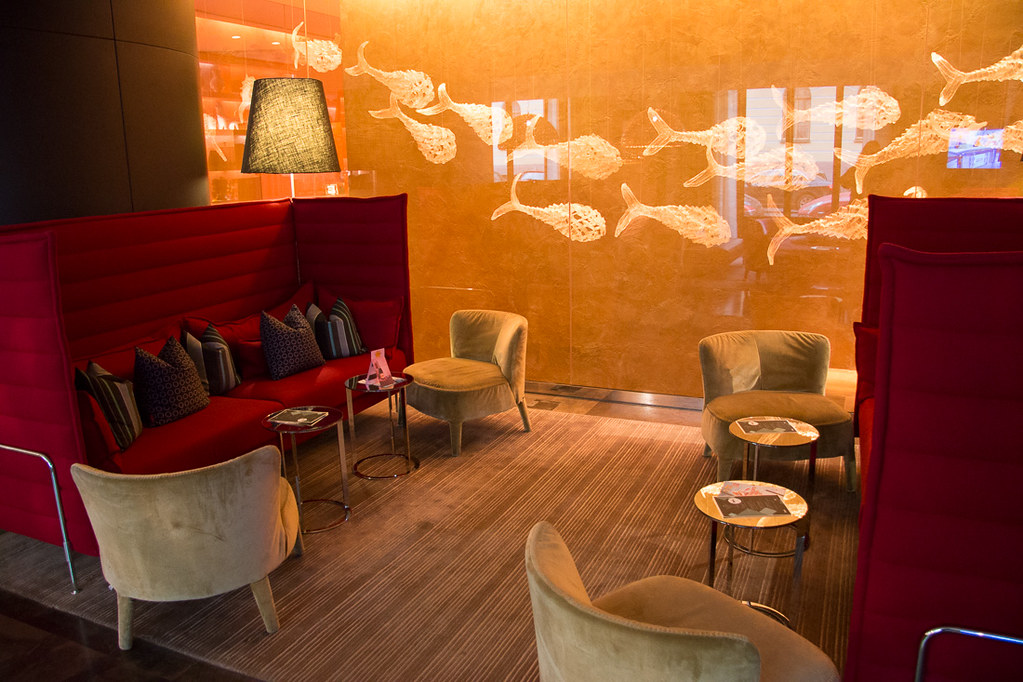 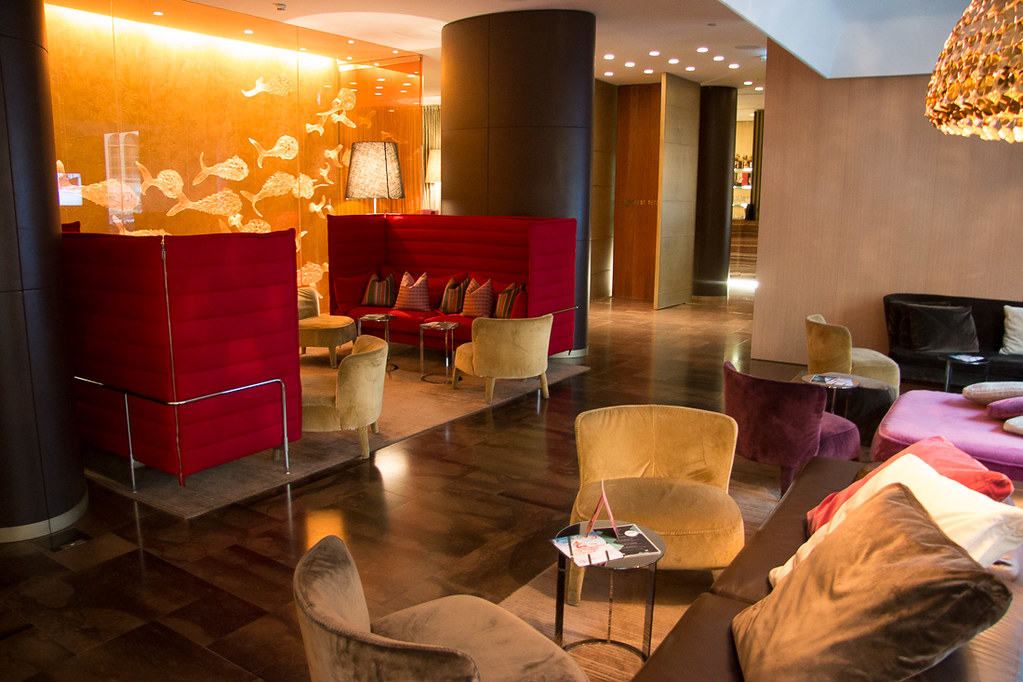 There was also a fireplace that Ken and I sat around to warm up after our tour excursions. 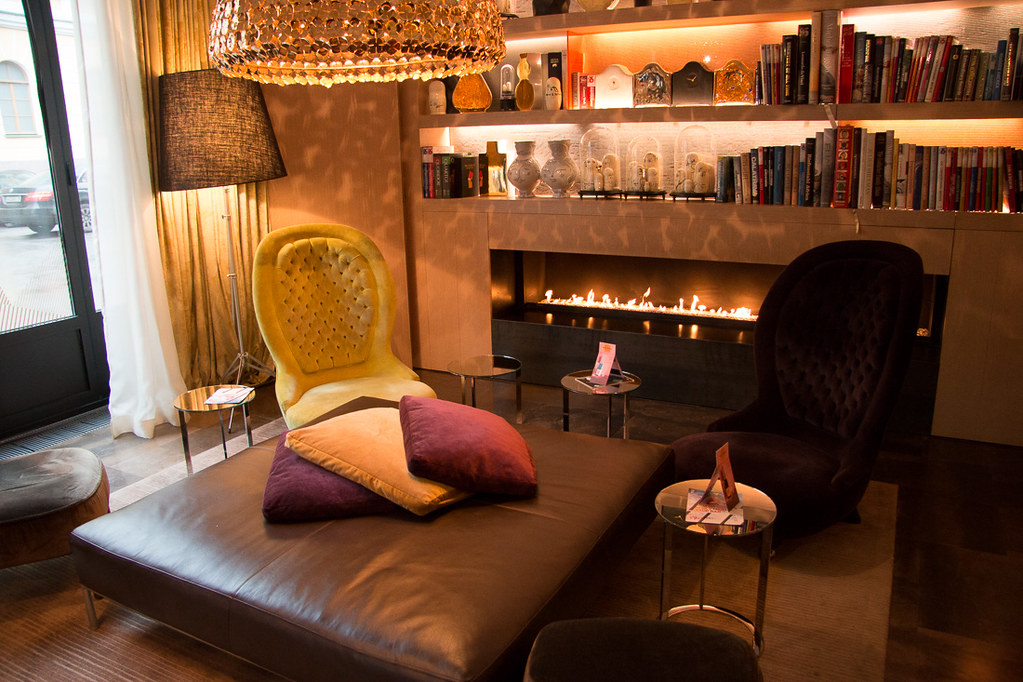 There was a bar in the lobby, but we never tried it. 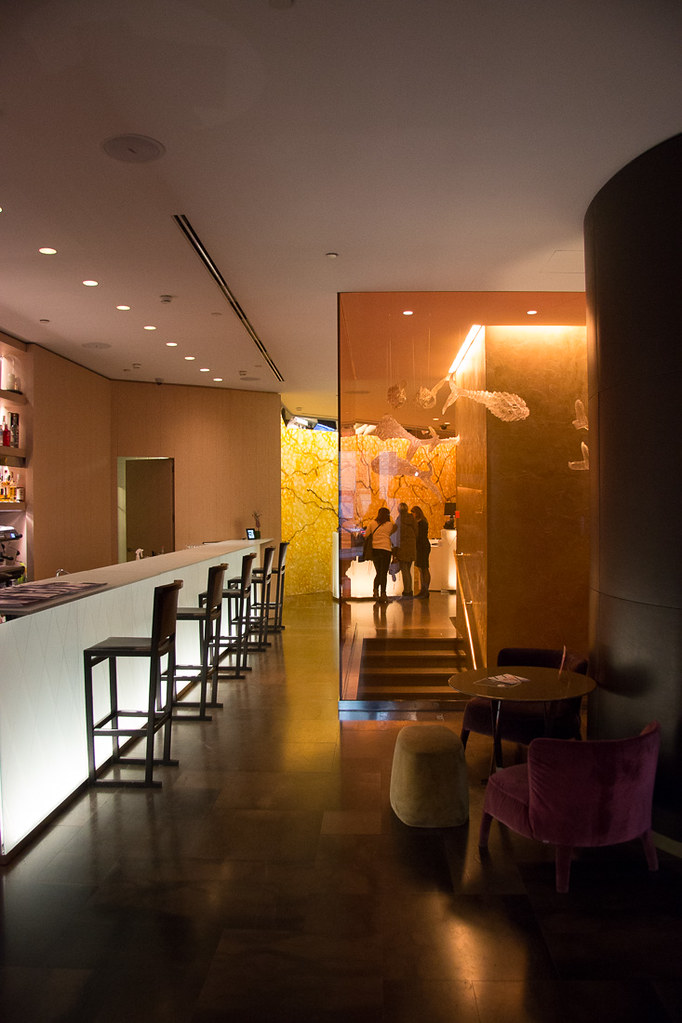 The check-in area was minimalist, and there was a seating area directly to the right of it. 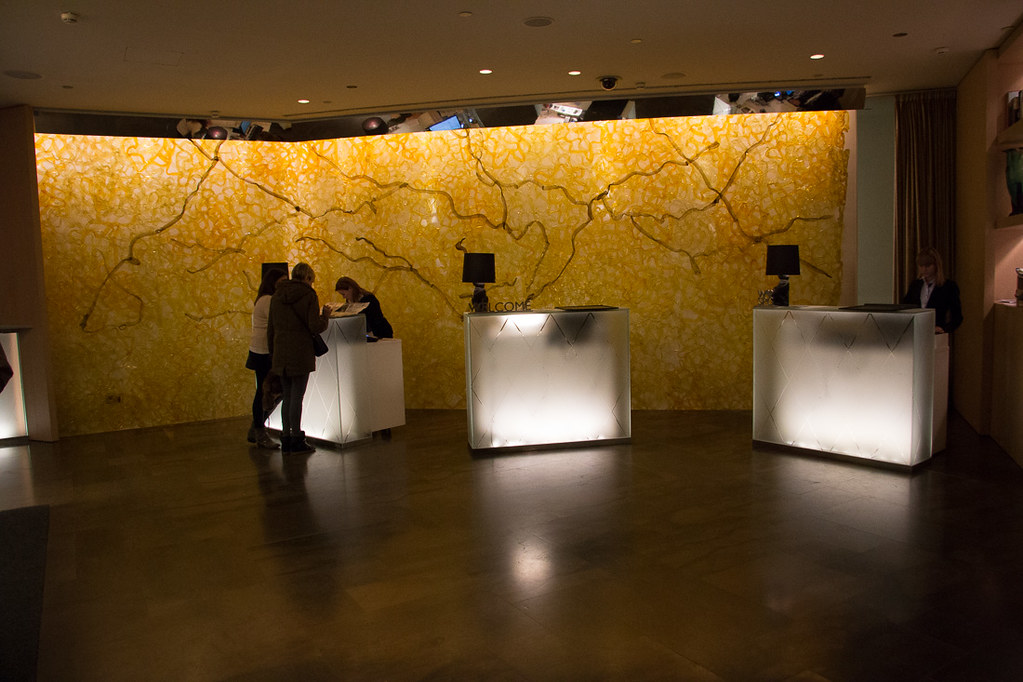 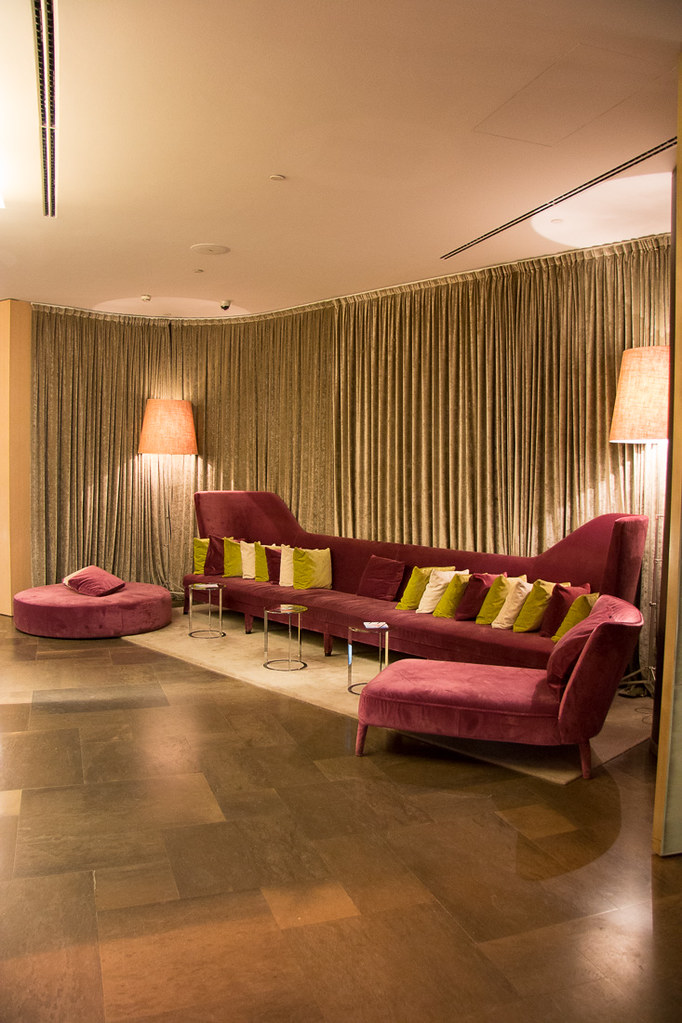 It was a great stay. There were a few customer service issues to point out:

1) The W St. Petersburg apparently has a fantastic rooftop terrace that provides great views of the city. Well, it was locked each time we tried to go up there. When we asked the front desk if an employee could just let us up there quickly to snap a few photos, we were pretty rudely told no. It’s fine that we couldn’t go up, I figured it didn’t hurt to ask, but they were really rude about it.

2) We had a very difficult time getting a taxi from the St. Petersburg train station to the W hotel. Each driver wanted to charge us about five times the amount that it would really cost (the hotel’s website had a very helpful section estimating what a taxi should cost from various waypoints, like the train station). We called the hotel, and they actually dispatched a taxi for us, pre-negotiating the price. So that was VERY helpful.

When it was time to take a taxi to the airport on the last day of our trip, we wanted to make sure that the hotel staff negotiated the price of the taxi before we got in. Well, for whatever reason, the doormen were nowhere to be found. So, we went to the front desk to ask if they could get us a taxi and verify the price to the airport. The lady (the same one who was rude about the rooftop terrace), told us to just go outside and hail a cab. We tried to explain the problem we had at the train station a few days earlier, and she just said, “No, it shouldn’t cost more than 1500 rubles to get to the airport.” We were like, “Yeah, we know what it SHOULD cost, but that won’t stop a taxi driver from trying to rip us off.” Then she sighed loudly and angrily walked toward the front door to get us a taxi.

Anyway, those two small incidents didn’t affect our enjoyment too much (I’d still stay there again and recommend it to anybody going to St. Petersburg), but I just thought I’d point out that there are some elements of their customer service that could be improved.

Bottom line? The W is a great option if your travels take you to St. Petersburg! 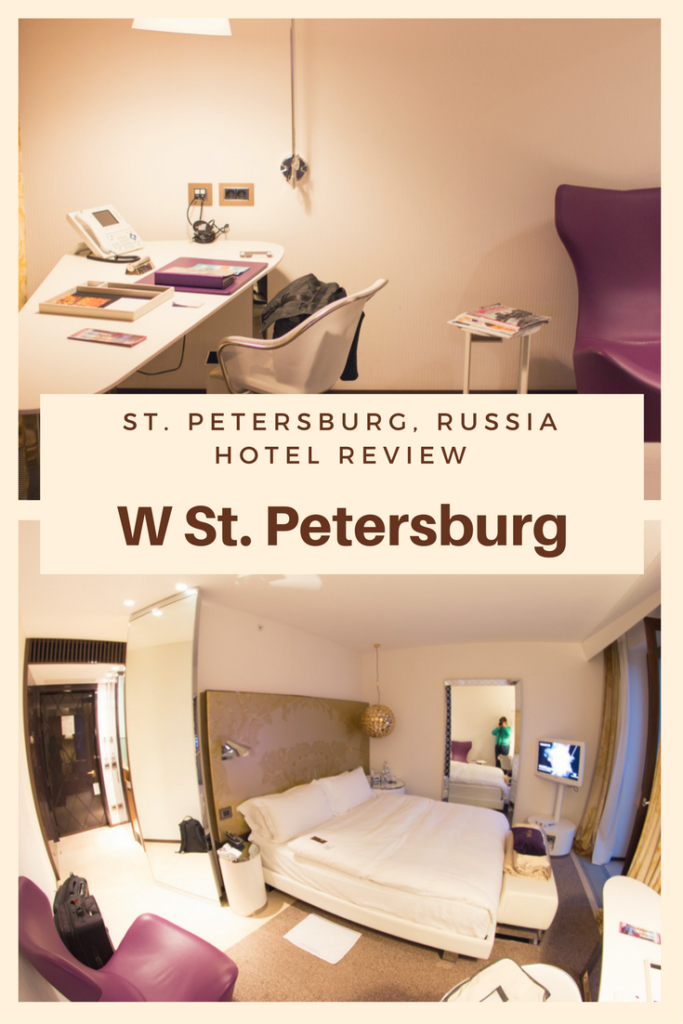 […] We wanted to walk along the Neva River some more to take in the sights. Luckily it was a short walk from theW St. Petersburg. […]