This post will combine events we saw on two different days.

The third event we had tickets for at the Sochi Olympics was Ski Jumping. It was the first non-medal event we’d be seeing, but it was still great! The jump was the “long jump.” I didn’t even know there were two types of ski jumps. The smaller jump is on the right, and the long jump is on the left. 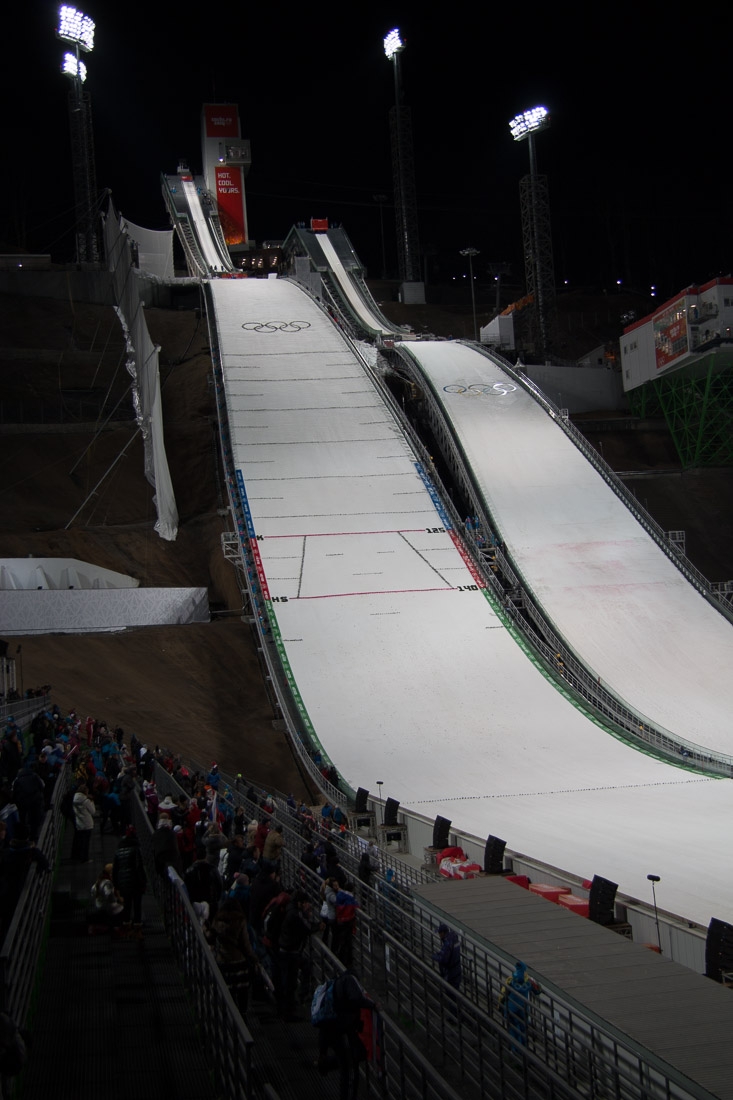 Like the luge event the night before, we had to take a Gondola to the venue. These gondolas were slightly larger, and we were better prepared to board them and didn’t get nearly knocked over this time! It was always so difficult to gauge how long it would take us to get from the coast (where we were staying) to the mountain events. We ended up arriving at the venue nearly 90 minutes prior to the event start time. But not to worry, we got to watch the practice round! Nearly all of the 60 or so jumpers decided to participate in the practice round before the qualifying event. The stands started to fill up as the qualifying event was underway. I captured a wide angle shot of the venue, with the jumps on the left, the scoreboard at the bottom of the hills, and the media box on the right. There was an elevated structure, right near the “jump” part of the hill, and we’re not sure what that was. We think it might have been judges and/or coaches. 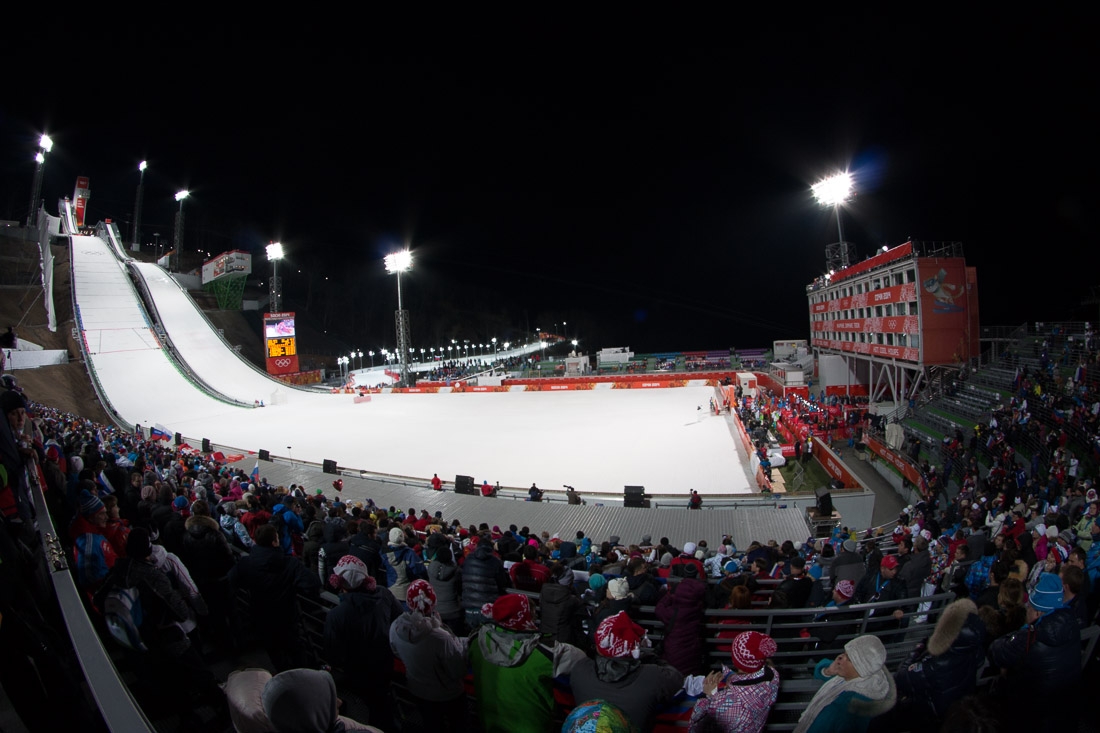 Here is a high speed capture with sequential images of a single jumper, much like the high speed sequence I posted in my luge post! 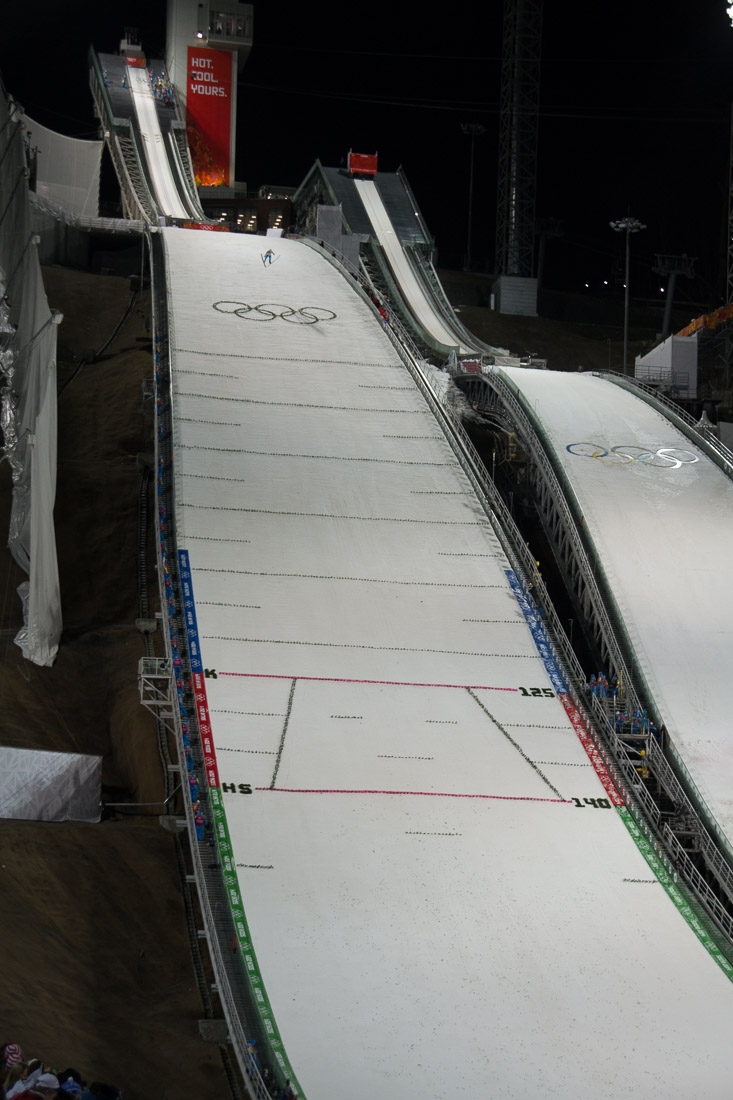 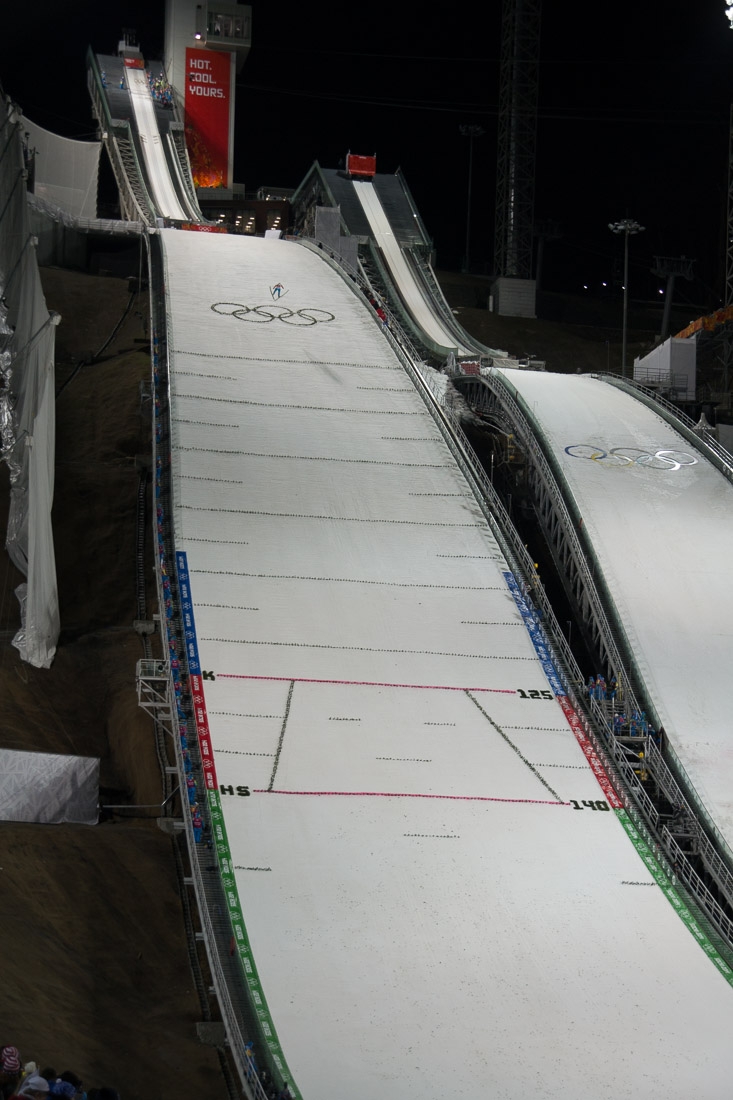 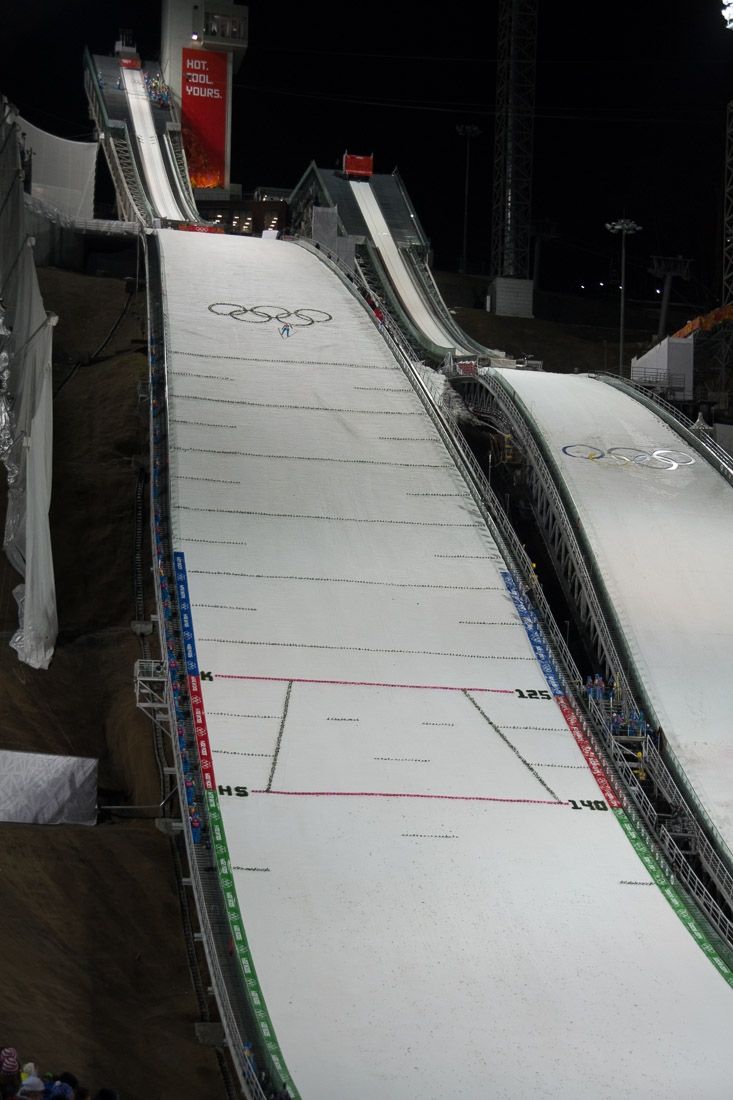 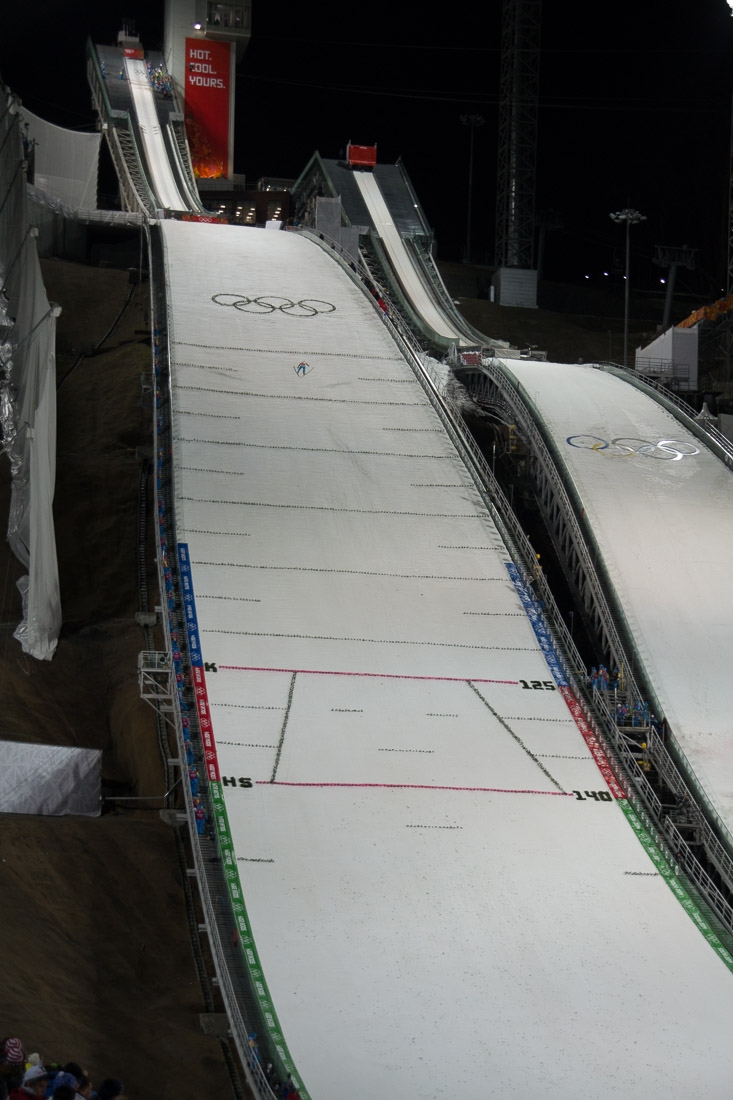 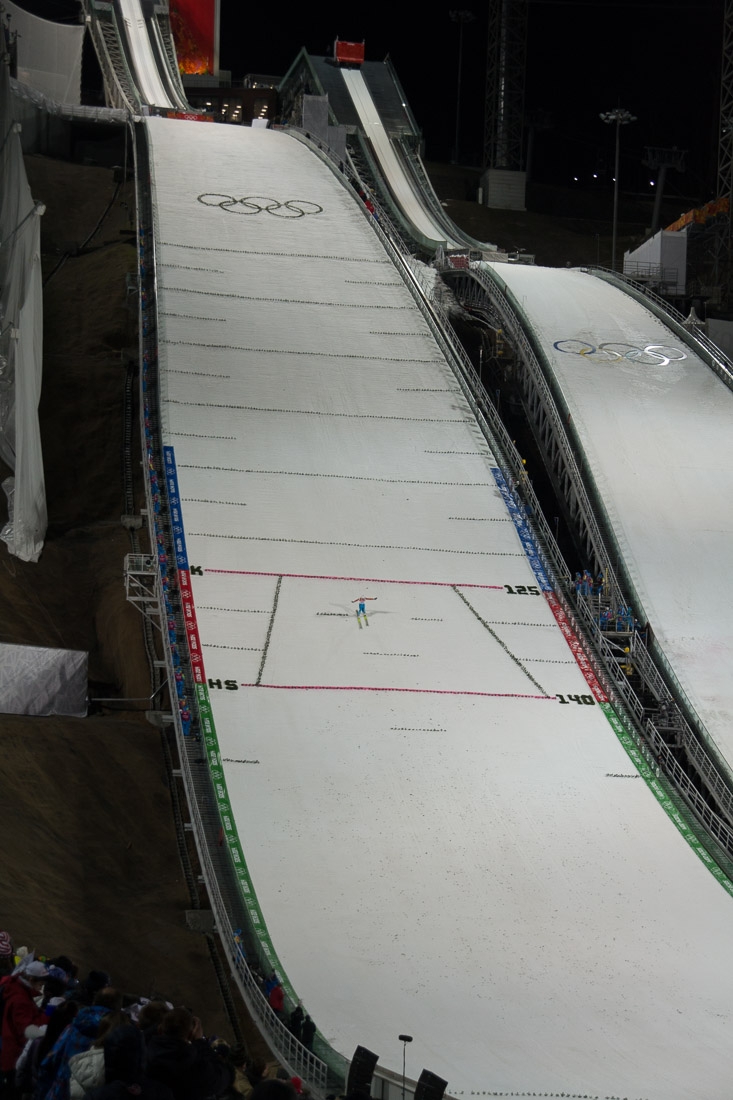 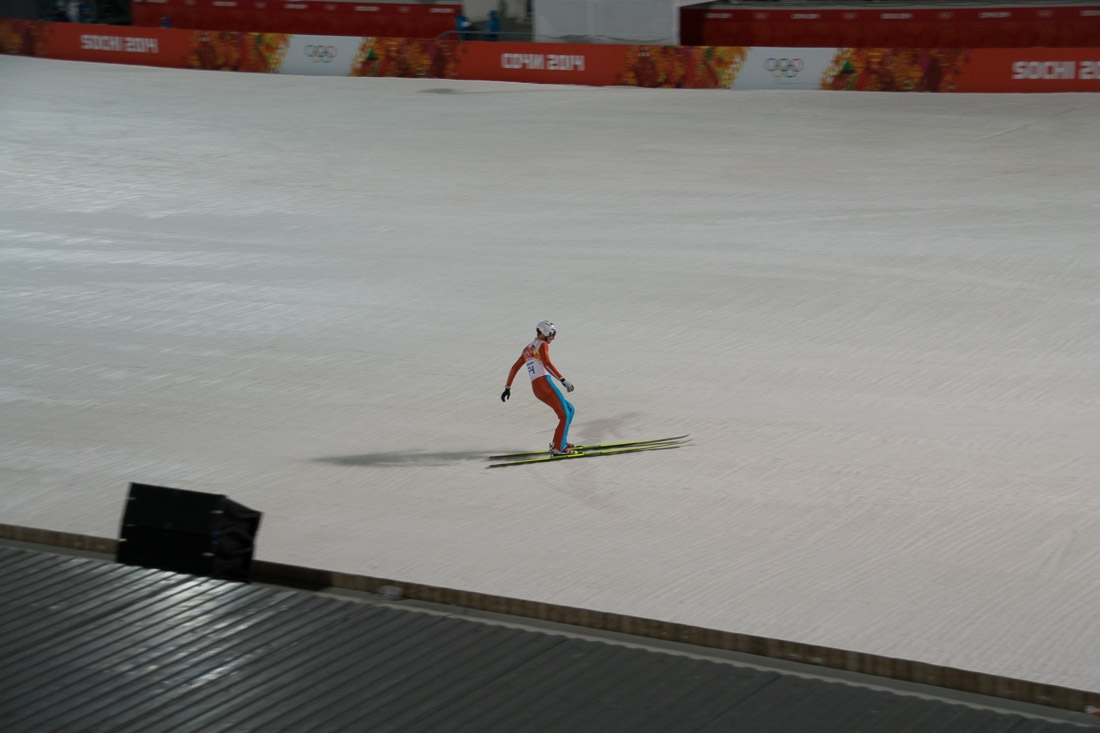 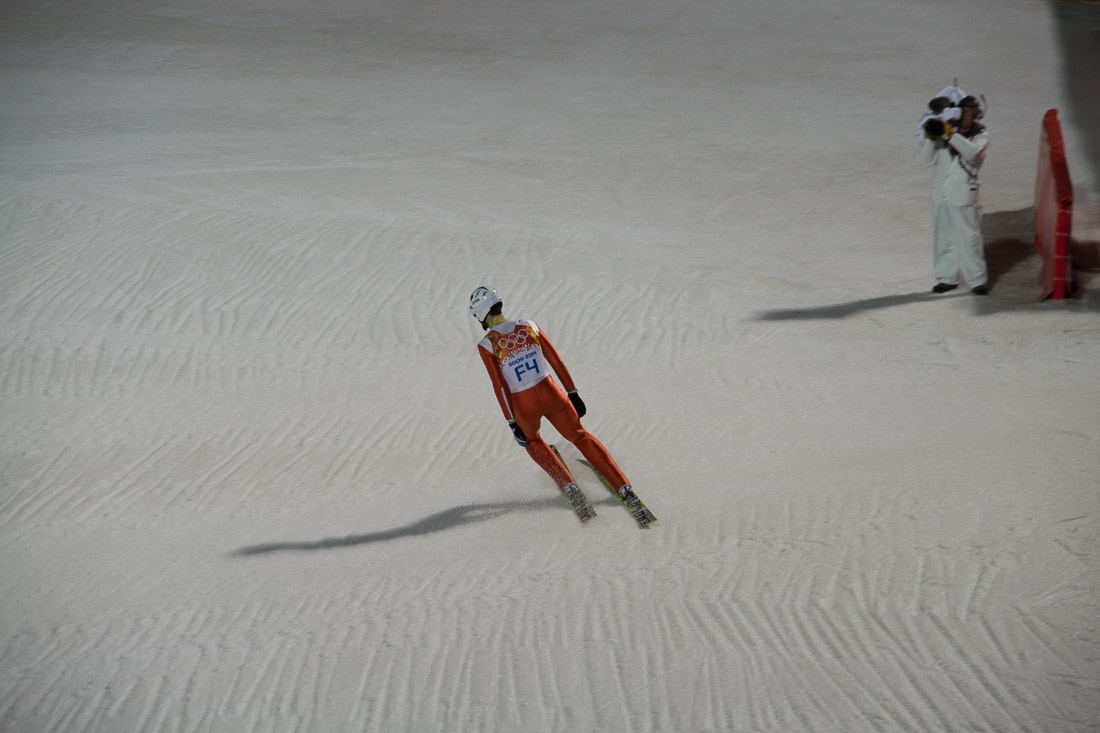 If you look close up on the hill, it looks like there is like dirt or debris on the hill. Those are actually pine needles (and some other greenery) to help jumpers determine where their landing surface is. When you jump and all you see is white snow, it’s difficult to tell how far away the snow actually is. You can read a better explanation of it here. 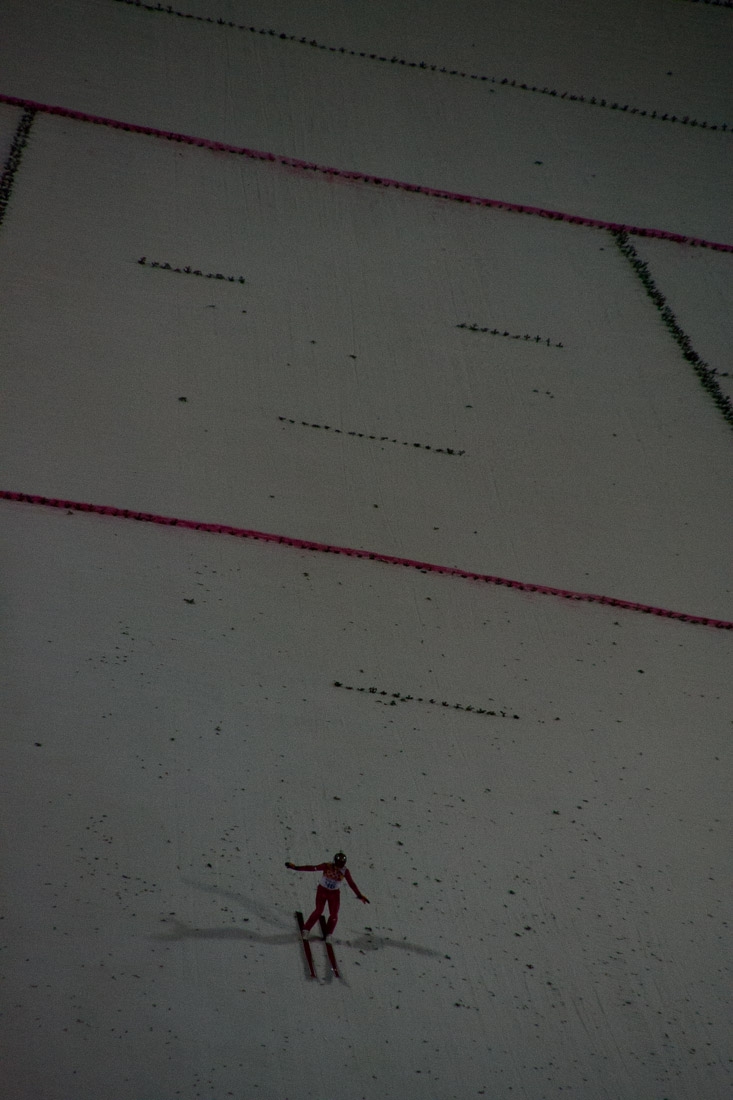 As things wrapped up, my sister took a picture of me and Ken, and then we all headed back to the gondolas that would take us back to the Krasnaya Polyana transportation hub. 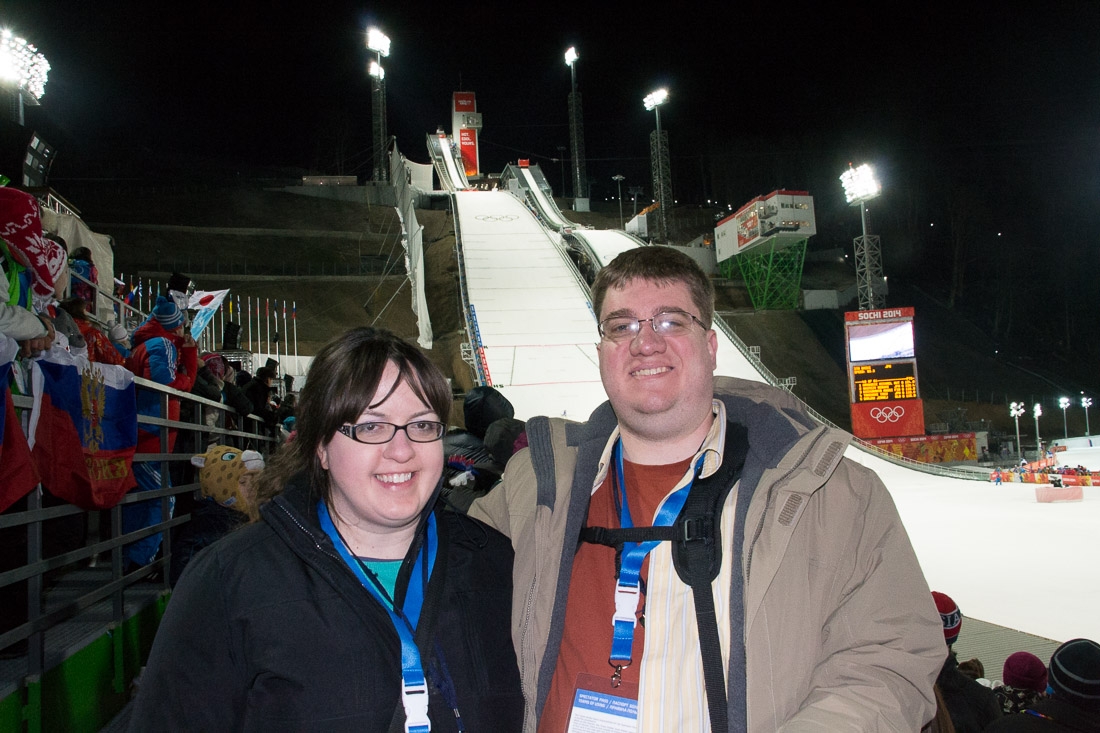 The next night, we had tickets to Speed Skating (the Men’s 1500 m), the only event we saw in Olympic Park! As we walked to the venue in Olympic Park, the air was electric with excitement. The USA-Russia Men’s hockey game was starting soon, and Russians were just chanting with pride as they walked through Olympic Park. Spoiler alert: By the time we left the Speed Skating event, the Russians had already lost the hockey game. It was so quiet in Olympic Park you could hear a pin drop! A very different mood than earlier! We arrived at the venue really early, and captured some pictures of a very empty rink! 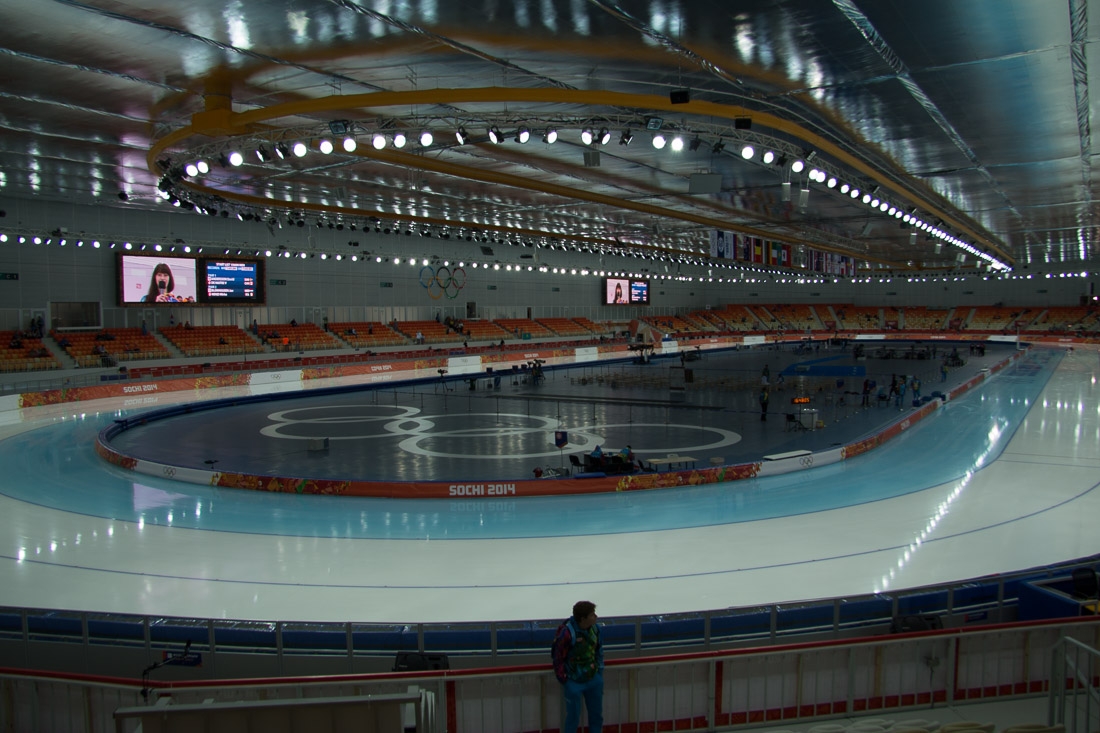 Right before a race would start, they would put images on the big screens of famous speed skaters doing the “shush” sign so that the audience would quiet down. 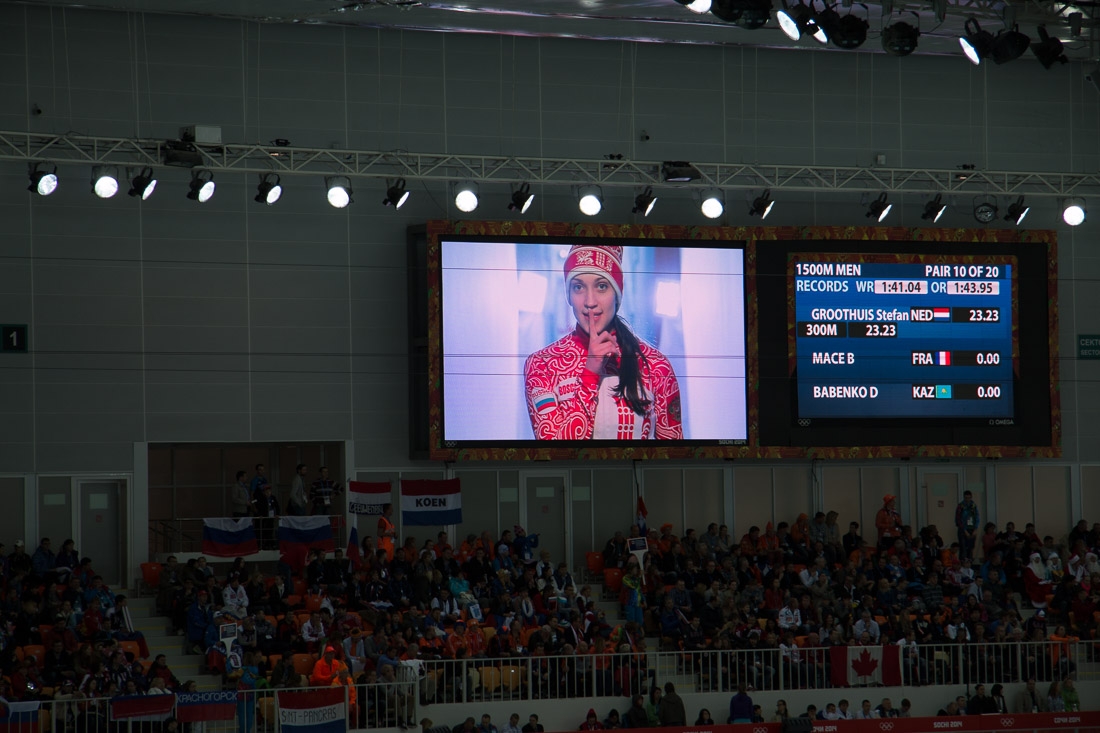 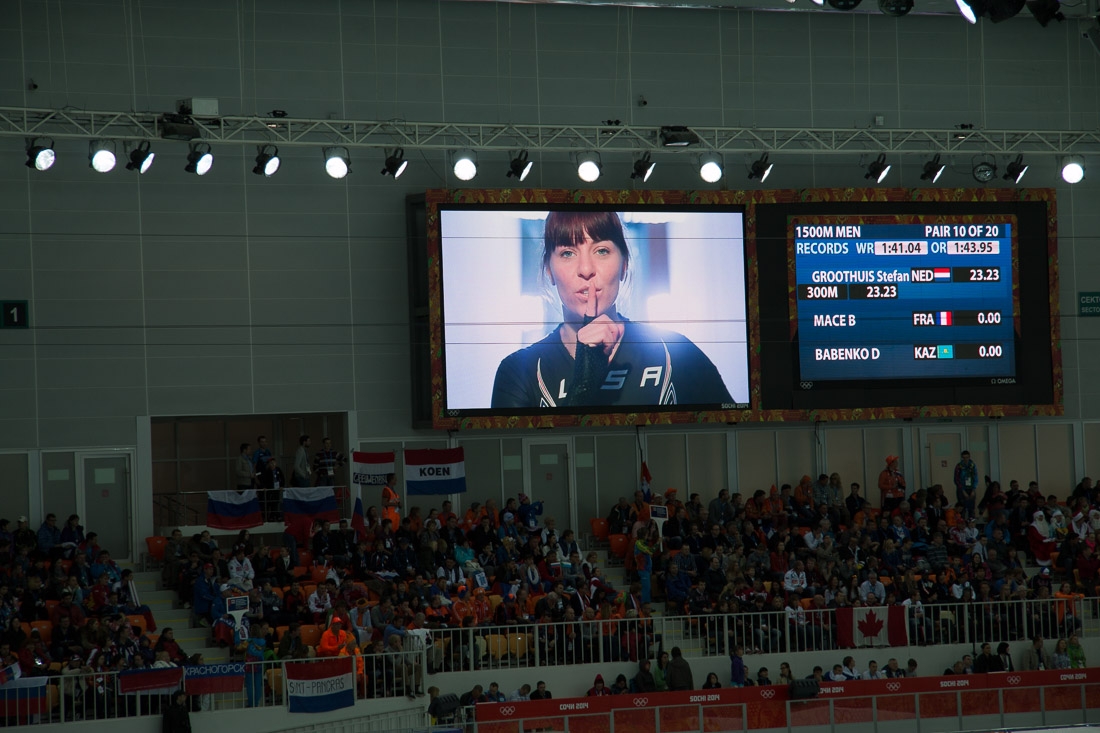 I think there were 20 or 30 pairs “races.” I put races in quotations because the two skaters are not actually racing one another. That is called “short track” speed skating. Instead, in this type of speed skating, they just so happen to skate in pairs, but all that matters is their overall individual finishing times compared to the other competitors. I love the look of determination on their faces! I also didn’t realize how short speed skates are and that they don’t even cover the ankle. 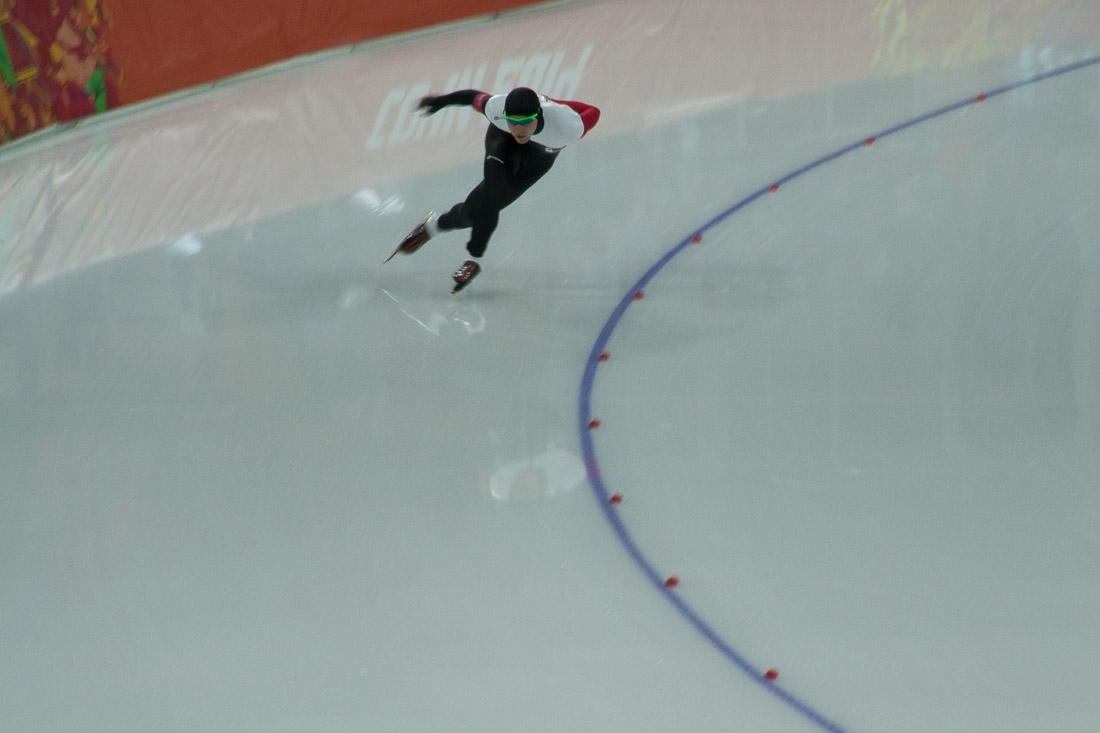 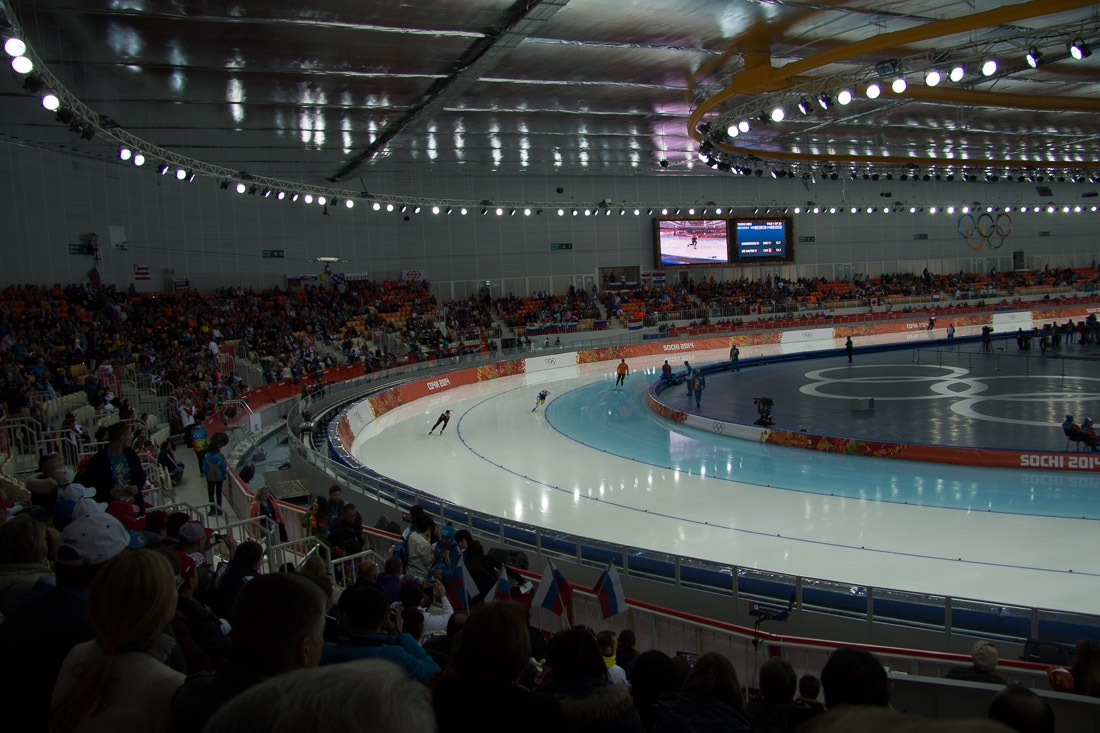 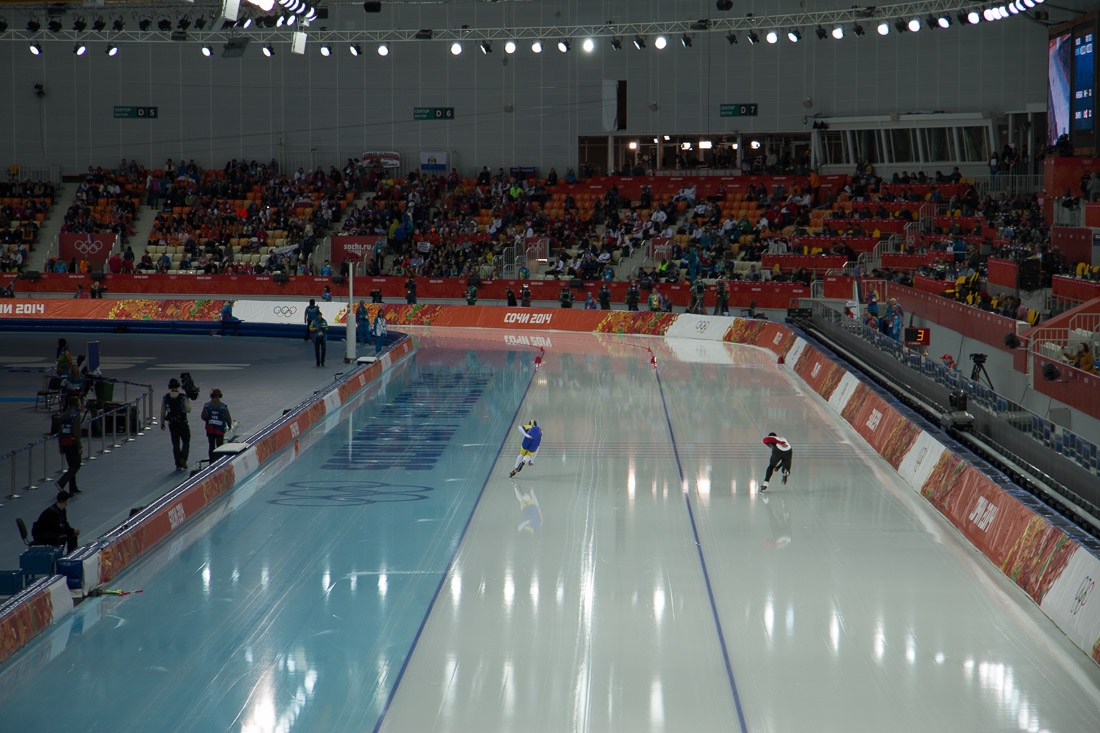 Like many of the other venues, I was fascinated by the camera equipment used to film the events! 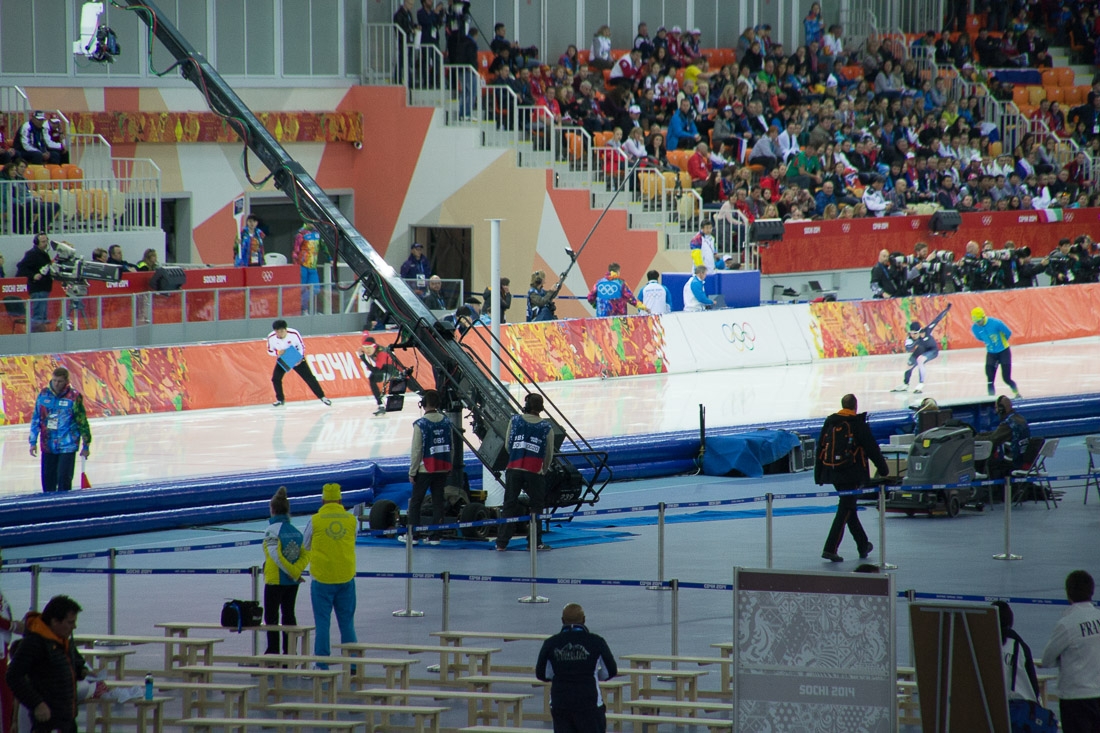 This was a medal event, and it was really crowded. And much of the crowd was decked out in orange, because I don’t think there are bigger speed skating fans than the Dutch! They typically dominate the sport! 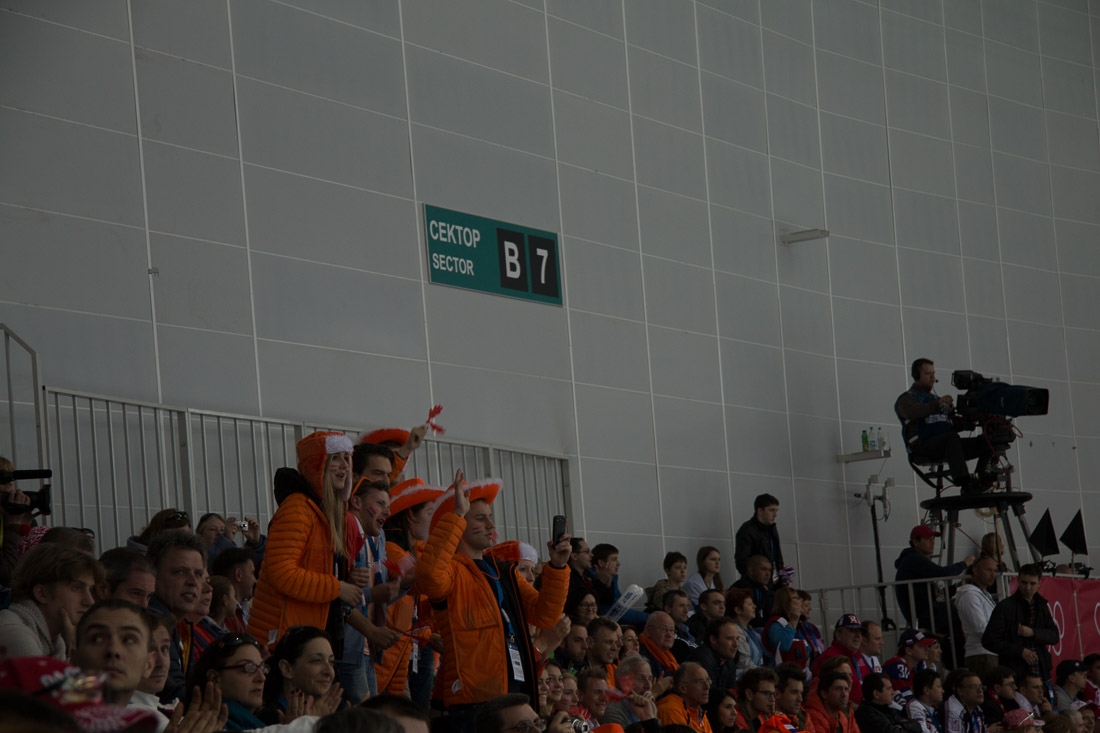 But of course, we were cheering on Team USA! 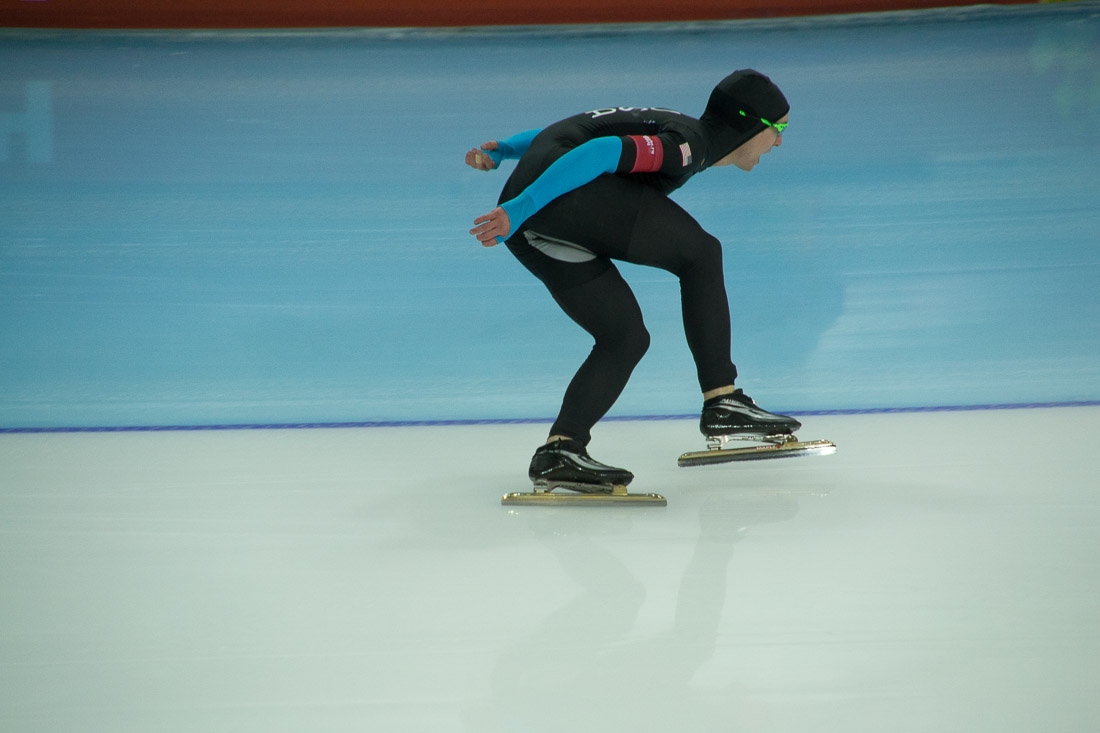 After the event was over, a band came through and played in the middle of the rink! 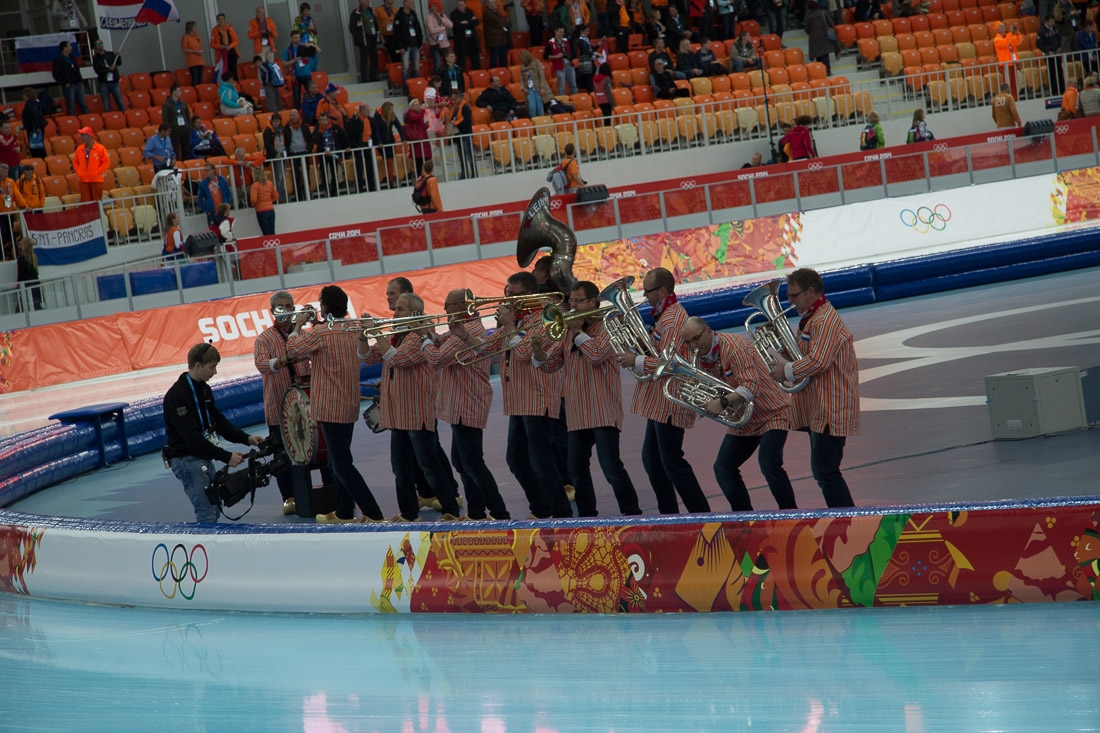 And we said farewell to speed skating, and our last Olympic event during our five days in Sochi! 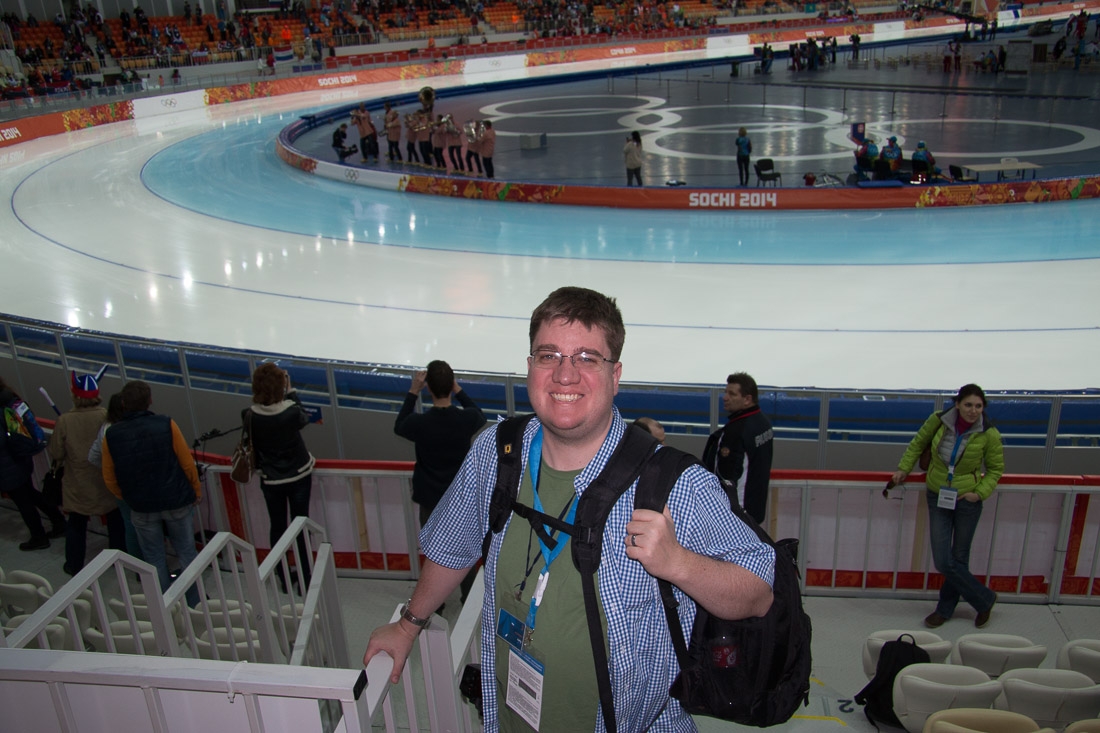 Remember in my post about Olympic Park that I lamented the three hour wait time just to ENTER the souvenir store? Well, there was a little souvenir kiosk at the speed skating venue. During a “zamboni” break in the competition, I went to the kiosk, but there was a line to enter. They were only letting like three people in at a time. I waited for nearly 30 minutes, and was still like five people away from entering. The competition had started back up, so I left the line. The kiosk closed right after the event was over (seriously, why do they do that?) and the last customers had already been allowed in. It was our last night in Sochi, and I wanted to leave with SOME SORT of Olympic souvenir. Outside of the store, I just kind of looked at the security guard and said, in English, “Look, I know exactly what I want, I’m just going to go in here real quick,” and I slipped past the retractable belt barrier that had been put up in front of the entrance. The security guard didn’t object, but the people working the counter in the store kind of did. I just looked really sad and pleaded with them. I knew exactly what I wanted, picked up the items, and checked out. Whew! We had a few souvenirs to take home. Ken took this picture while I was in there. Note the belt barrier that had been in front of the door. 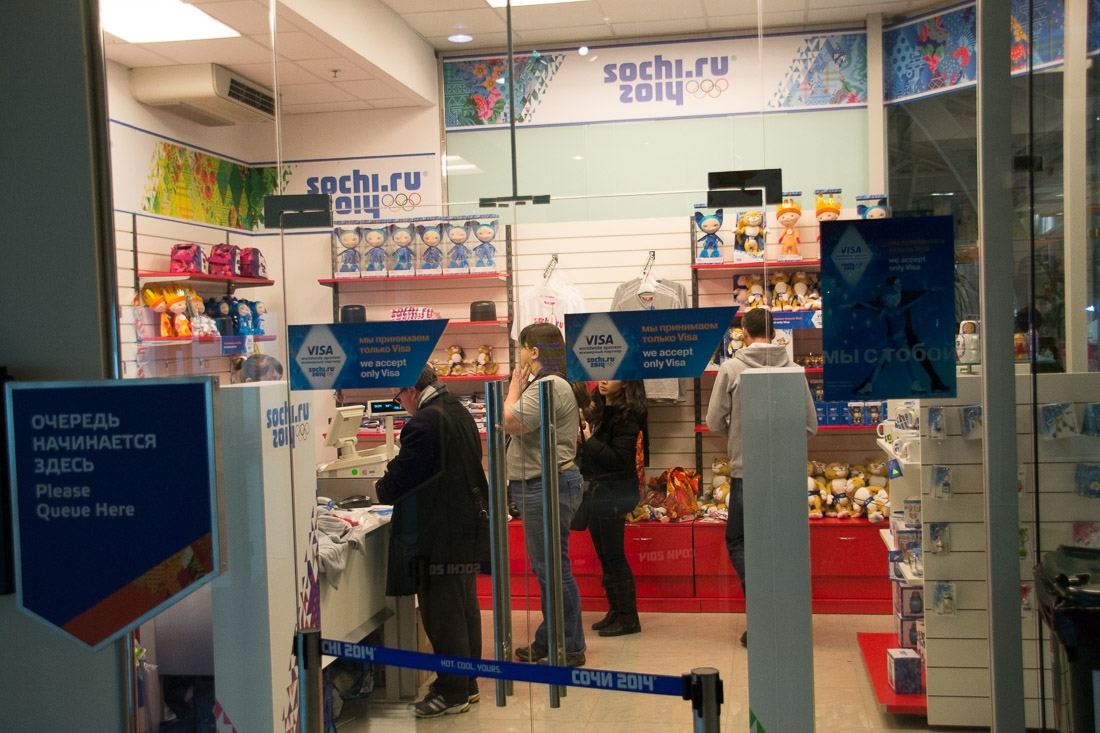 And that was it! As we left the park, we walked past the Olympic Flame one more time, and snapped a few photos. Then we headed on the (long) walk to the exit, and headed back to our cruise ship hotel to pack up our things for our very early morning departure for Moscow! 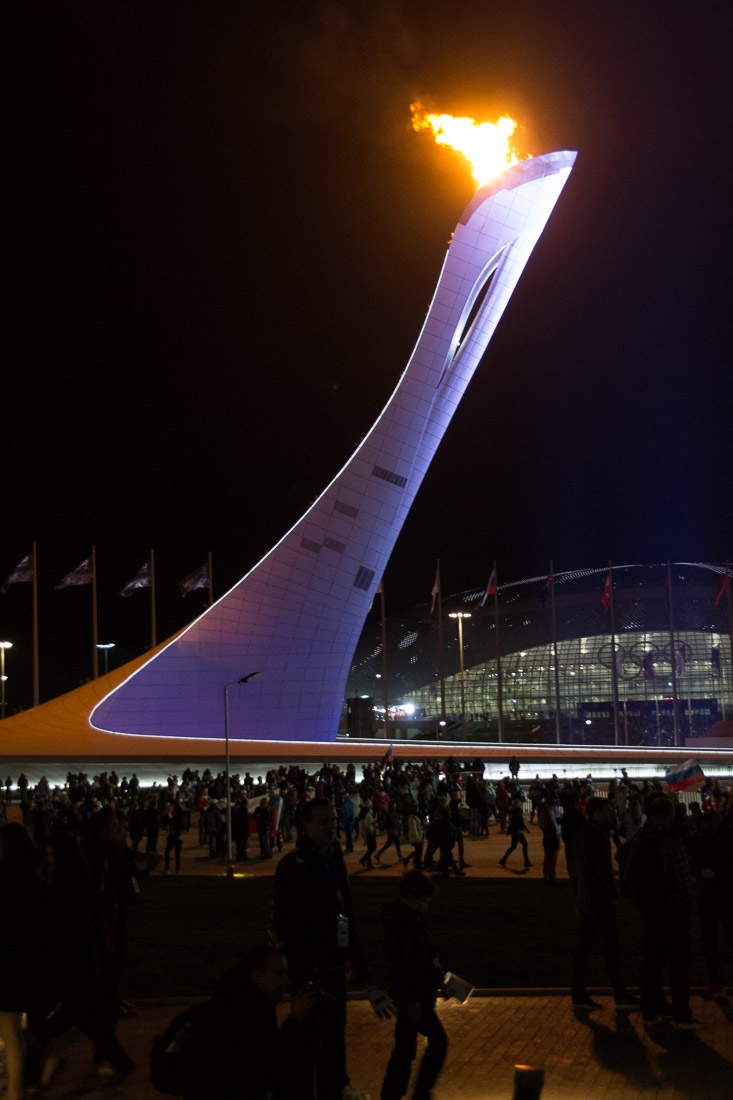