Last year, when I talked about our DIY DVD shelf project, I apologized in the post for the terrible lighting in our photos because our basement was so poorly lit. Our basement has zero windows. It has a set of french doors that lead out to our patio, but the doors are directly under our deck, meaning we get virtually no light. We had a whopping three ceiling lights in our 600 square foot basement, one of which we actually uninstalled after we moved in because it was right over our sofa and shined right in our eyes as we watched TV.

In other words, the ceiling lights in our basement were virtually useless and horrendously ugly. We tried to make do with floorlamps and task lights and even some sconces, but it was always dark in our basement, even in the middle of the afternoon. 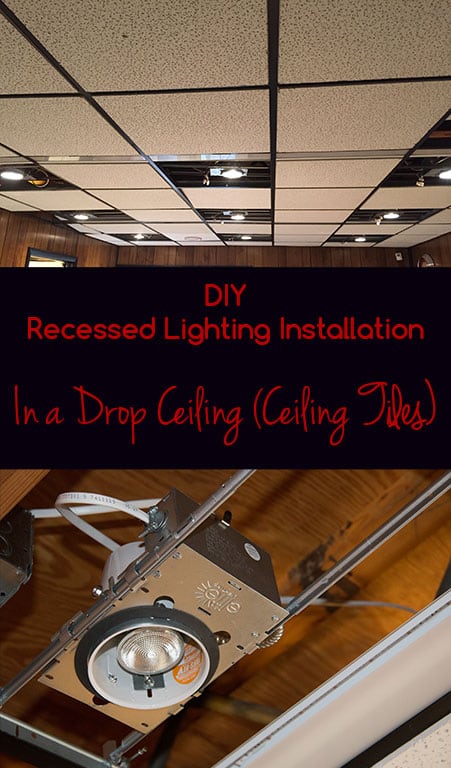 We had always tinkered with the idea of getting recessed lighting, but we shuddered at the thought of the electrician’s bill. We’d want 22 lights installed, and we estimated that would be about 16 hours of work. At $175/hour for our electricians, we just kept putting off the task as too expensive.

Then Ken started tinkering with the idea of doing the recessed lighting himself. He had done some other small scale electrical work around the house before, but I’m always pretty nervous when he’s playing with electrical wires. It doesn’t matter if the circuit breakers are turned off and his wire tester says the wires are off, it still makes me nervous, even though it shouldn’t.

Since we have a drop ceiling in our basement, all the wires he would need would be easily accessible, and doing it himself would save us a crap-ton of money. And, as the real bonus, of course, we’d actually BE ABLE TO SEE THINGS in our basement thanks to the added light.

Prep Work from the Electricians

So, I say we DIYed this project, but in reality, we did need to have the electricians come and do some preliminary work. But, it was only about 90 minutes of work instead of 16 hours. That’s a much smaller bill!

This is what we needed from our electricians: 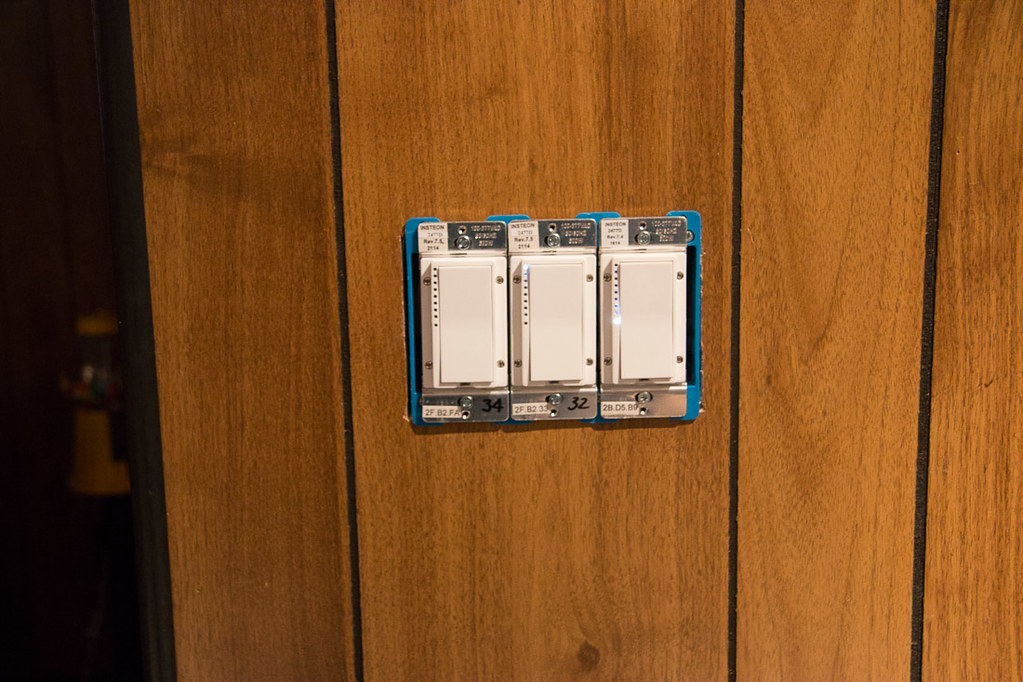 Before the electricians came, however, we did a decent amount of prep work. First, Ken made a “map” of all our ceiling tiles. He made notations where the ceiling tiles could not be used for lights, such as ceiling tiles that already housed air conditioning vents, where we mount our movie projector, and where we have speakers mounted in the ceiling. Then, in the illustration, he marked where he intended to eventually install the lights.  (OL=tile with old light fixture. L=tile where we wanted new light fixtures installed). 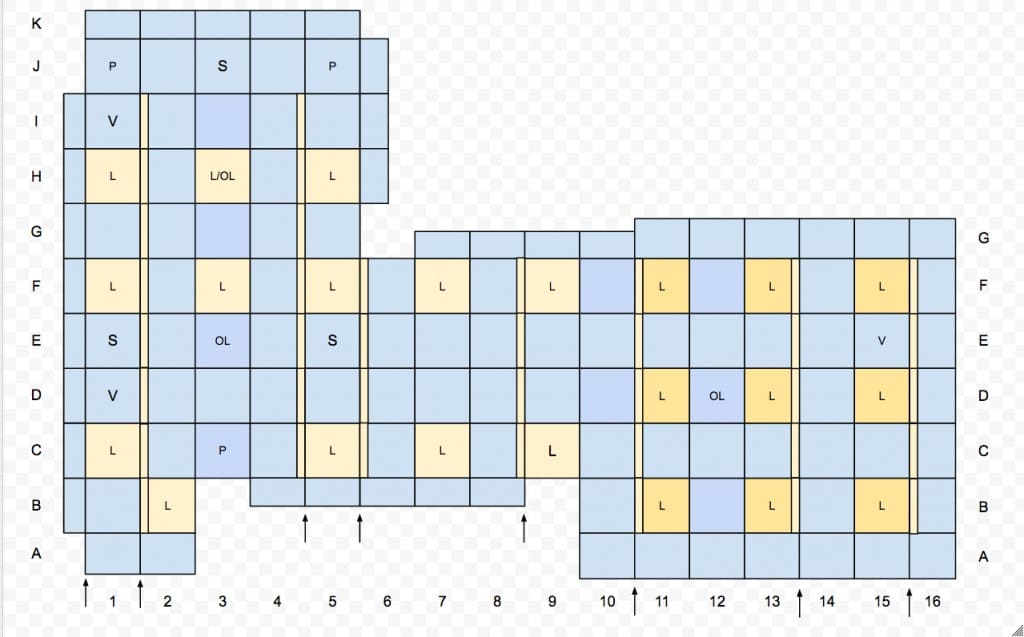 The illustration was so helpful in figuring out precisely where we wanted our new recessed lights. And it helped make sure they were evenly spaced out, and that we wouldn’t have a bright light right above our sofa shining in our face as we watched TV and made sure we didn’t accidentally plan to install recessed lights in a ceiling tile that was already being used, like for a vent or our projector.

You get the idea.

We decided on four zones (In the above diagram, zone one was columns 1-5 (with the exception of C5, which we added to zone two), zone two was columns 7-9, zone 3 was columns 11-15, and zone 4 was C1 and B2 (basically the lights we’d want on when walking up and down the stairs). Which meant that we needed the electricians to install three light switches, one for each zone, since we wanted to be able to control each zone separately. (The fourth zone, C1 and B2, were already controlled separately by an existing light switch, so we didn’t need any changes on that one).

The electricians installed the switches on the wall, wired it up to the new switches on the breaker panel, and then Ken was ready to proceed with his part of the project!

Removing the old, ugly light fixtures in preparation for the new ones!

Hopefully this goes without say, but WE ARE NOT ELECTRICIANS.  Working with electricity is risky, makes me nervous, and you should always ask an electrician for help!

(It’s worth pointing out that we purchased some extra ceiling tiles before this project. We figured we’d mess a few of them up, and then we also needed some new ones to replace the spots where we were removing old light fixtures).

So, we started with removing the old, terrible, annoying lights that we didn’t want anymore. Please look at how hideous these lights were: 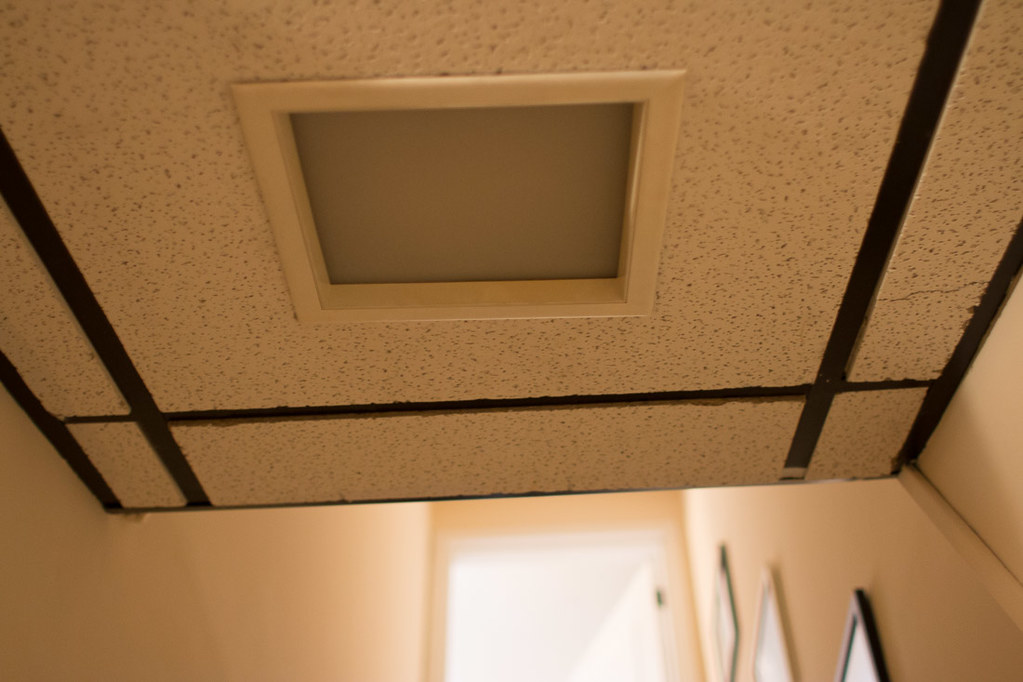 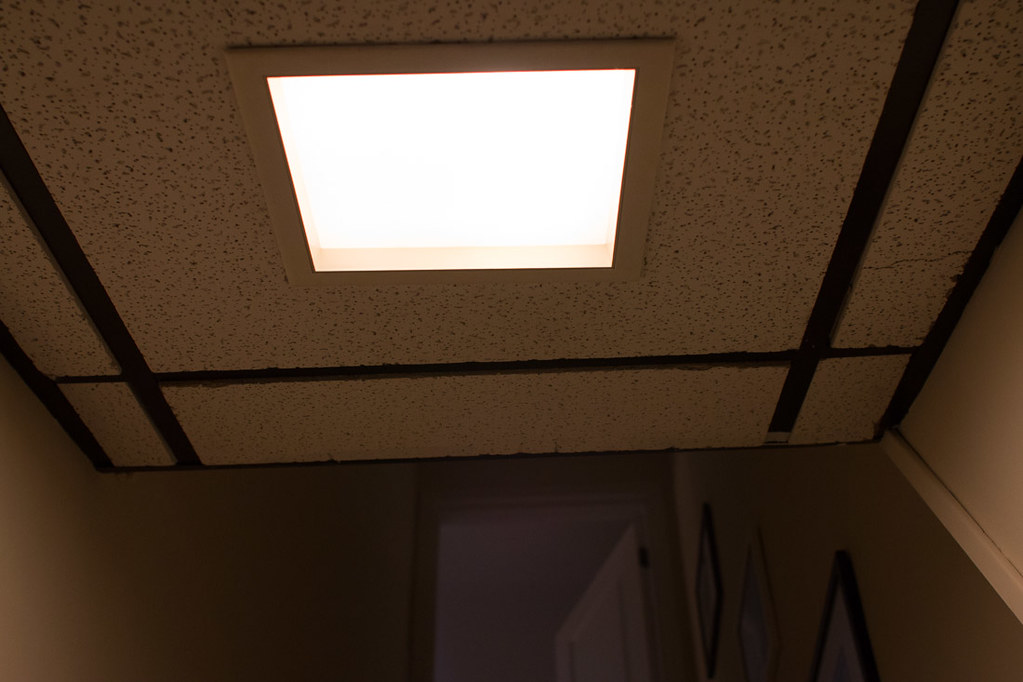 First, we shut off the circuit breakers for all the ceiling lights. Then we took the tile out of the ceiling and just kind of let the fixture hang. 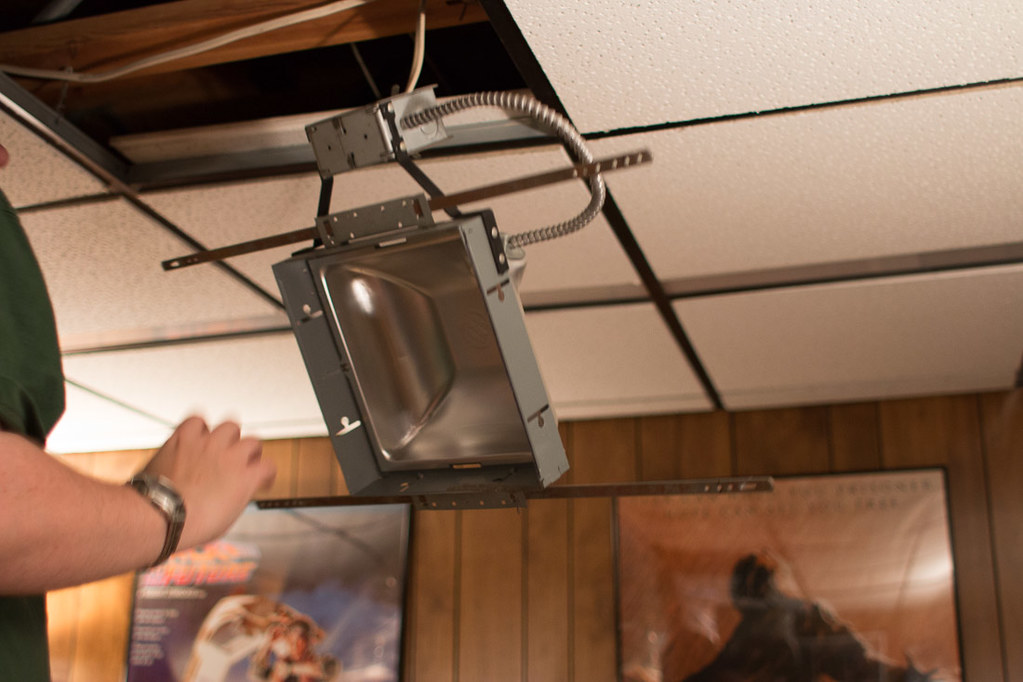 Ken confirmed that the electricity was off to those fixtures by using his wire tester. In this photo, he first confirmed it was on, and then turned off the circuit breaker and verified again using the tester. It was a blinking red light, meaning the power was off). 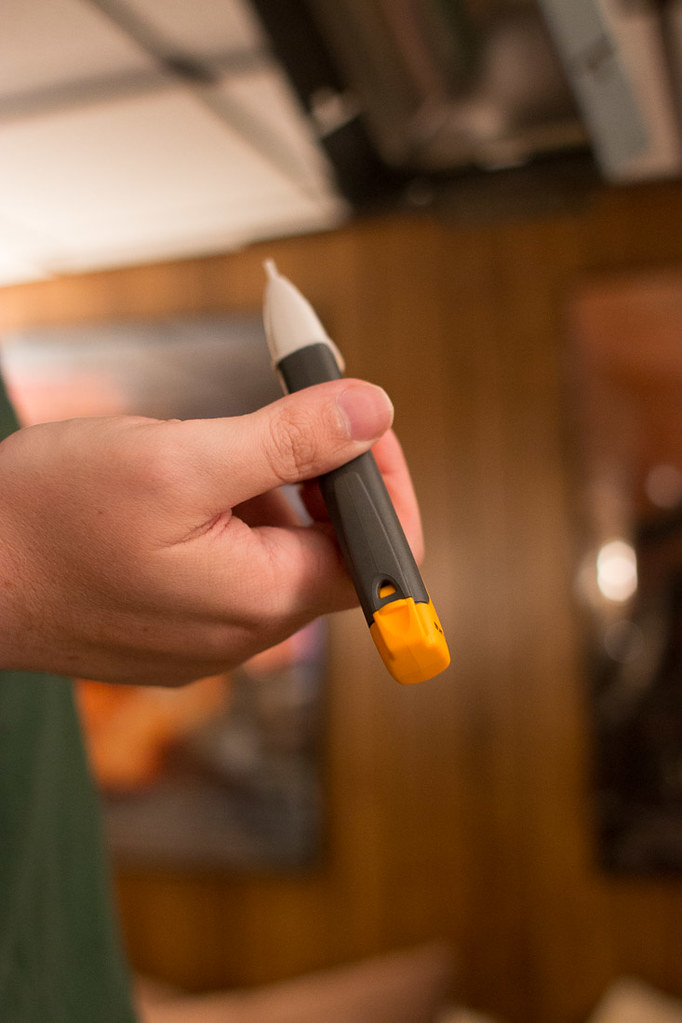 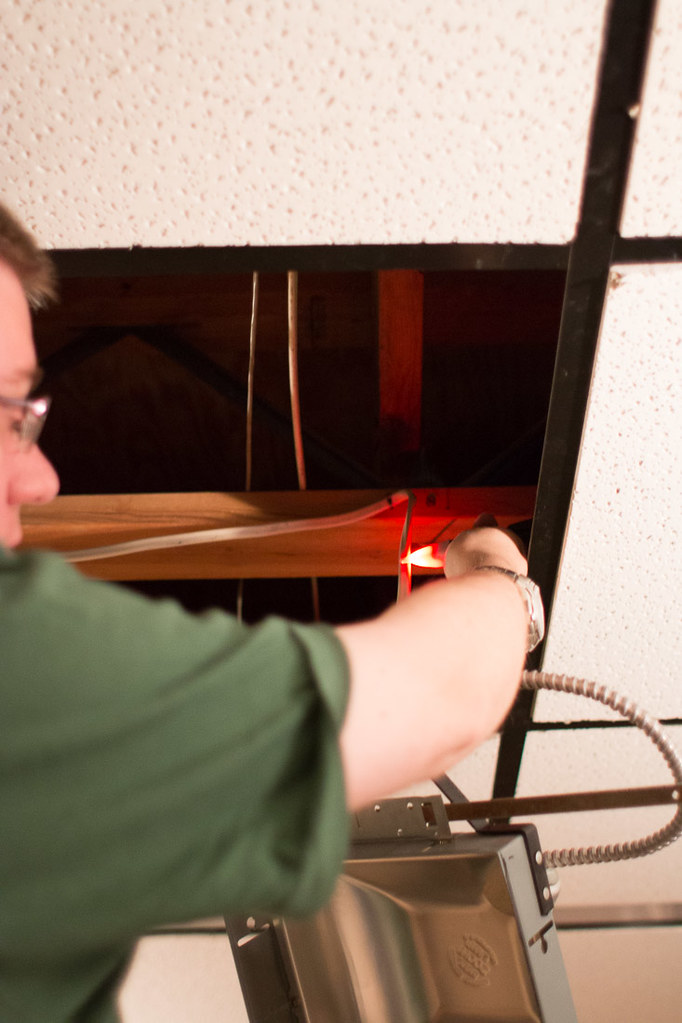 Then, after confirming that the electricity was off, Ken disconnected removed the front of the wire housing box 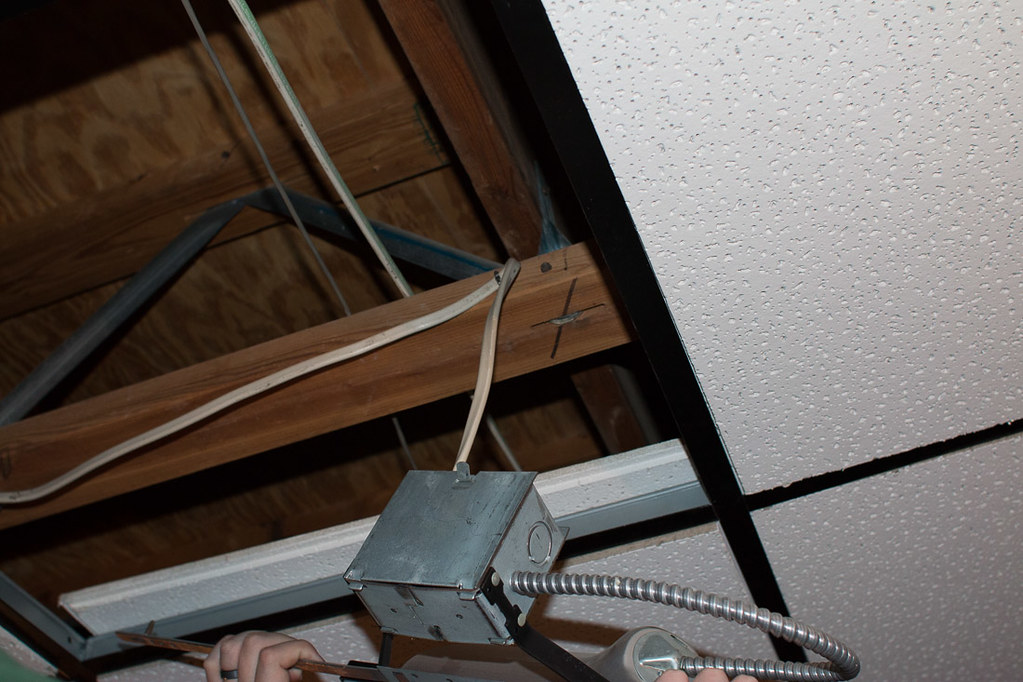 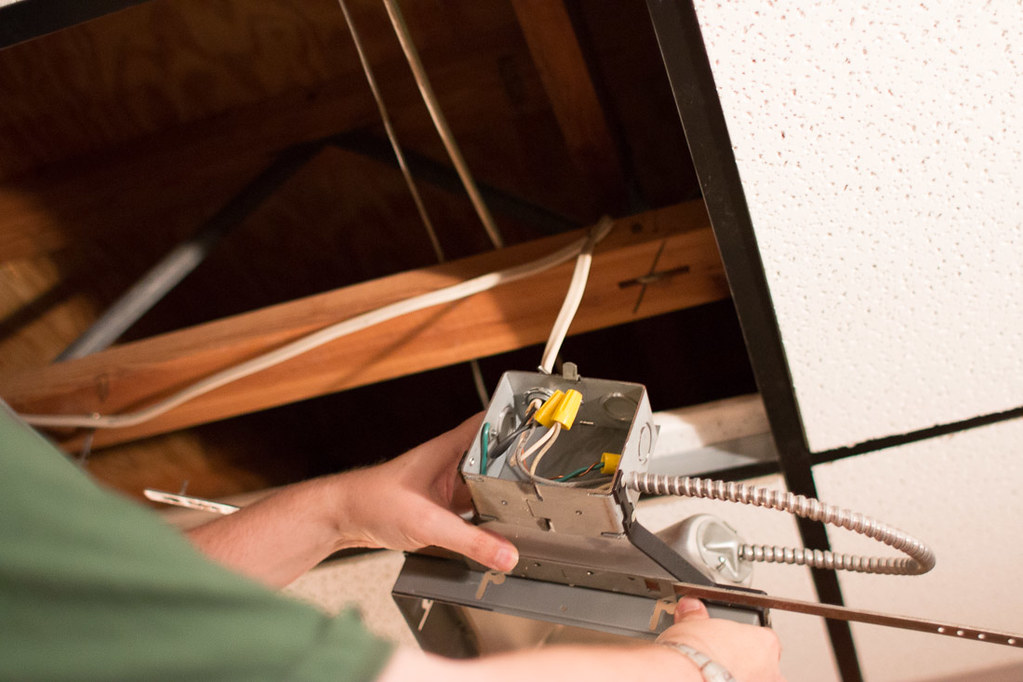 Then he removed the wire from the old light fixture. He did that by using a screwdriver to loosen the “wire clamp” on the old fixture. 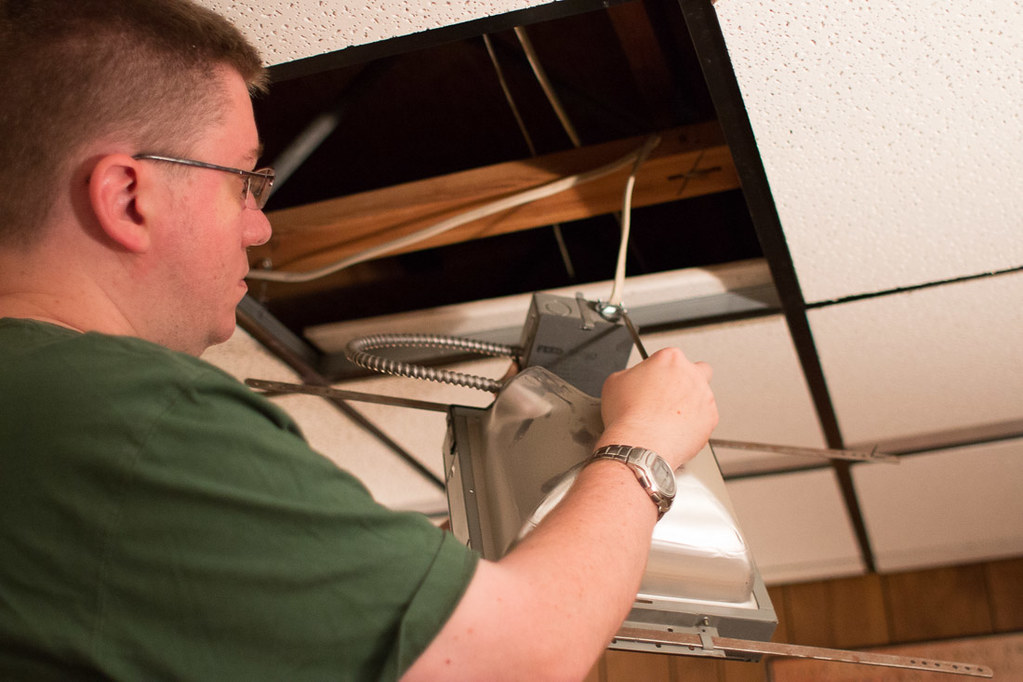 For the wires inside the housing “box” in the fixture, Ken removed the yellow wire nuts (which are actually the wires that are “combined” in the thick white wire, but just not sheathed together). 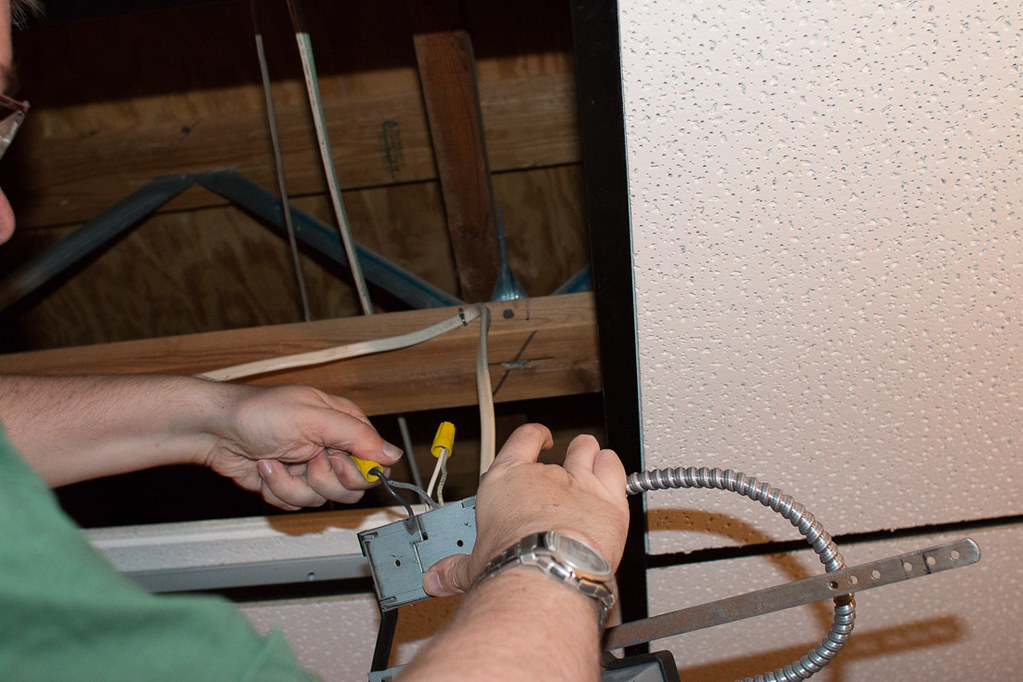 Since he had already removed the wire clamp above, the two individual wires (revealed after the wire nuts were removed) were able to just slip through the loosened clamp.  (He didn’t have to put wire nuts back on the ends because the power had been disconnected to those wires, so that wouldn’t pose danger in our ceiling) 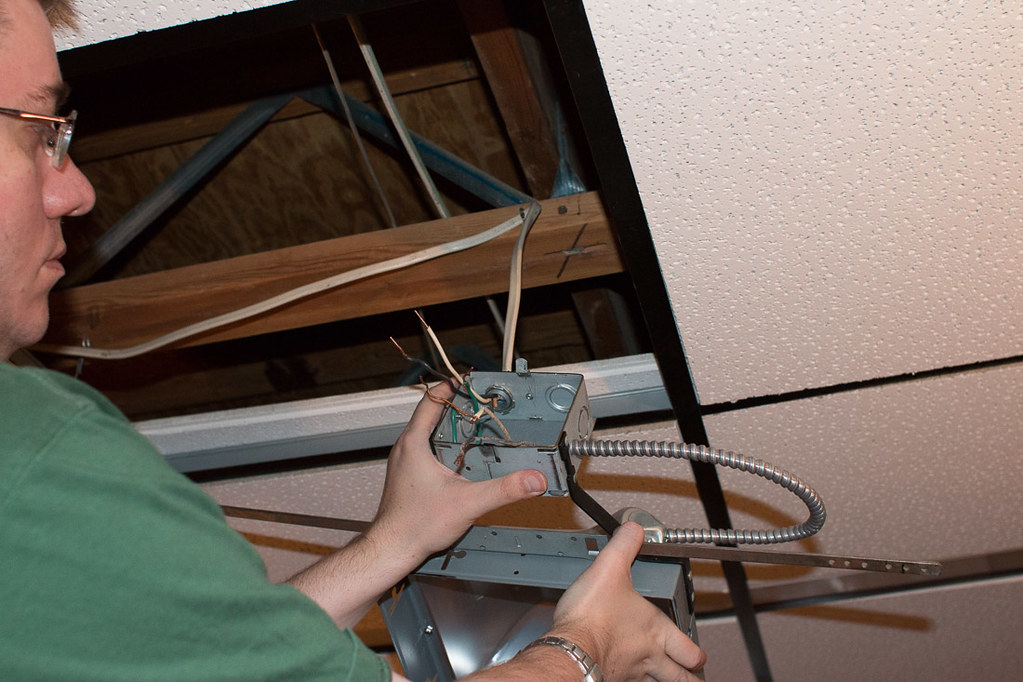 All our prep work was done!  It was time to start installing the new light fixtures in the ceiling, which we’ll cover in the next post in this series!

Celebrating One Year of our New Kitchen!