Update 5/22/2020: I’ve noticed that this old post has been getting a lot of traction recently! I suppose that everybody is looking for projects to keep themselves busy during quarantine, and scanning old photos is a great project that can be done without leaving the house!  Since this post is from 2014, I thought I would add a few additional links. Believe it or not, our photo scanning projects STILL continue.

Okay, and now onto the original post!  Stay safe, and happy quarantining!

Starting in 2008, I began scanning old family photos.  I have scanned approximately 11,000 photos and attempted to organize them both digitally, as well organize the physical photos.

Our old family photo organization was an absolute mess.  Some photos are in albums, some are loose in drawers.  The ones that are in albums are sometimes in no particular order.  There are photos from my first birthday are right next to the photos from my sixth birthday.  We never had much money growing up, so it looks like my parents just bought whatever the cheapest camera was when an old one broke.  The physical quality of the photos vary greatly, from photos that look barely faded, to photos that are almost unrecognizable and were so fuzzy.  A lot of photos are in those horrific sticky page albums, and it’s easy to rip the photos if you want to take them out to scan them.

So, I’ve been scanning in and organizing these photos.  Over the years, I’ve made changes to my workflow to help with the scanning process.  These are some of the things that I use:

So, I’ll walk you through the lessons I’ve learned scanning in old family photos and offer up a lot of the tips and tricks so that you can do the same!

Over the next few posts about photo scanning, I’ll walk you through the step-by-step tutorial of what worked for me, and some important lessons I learned along the way. 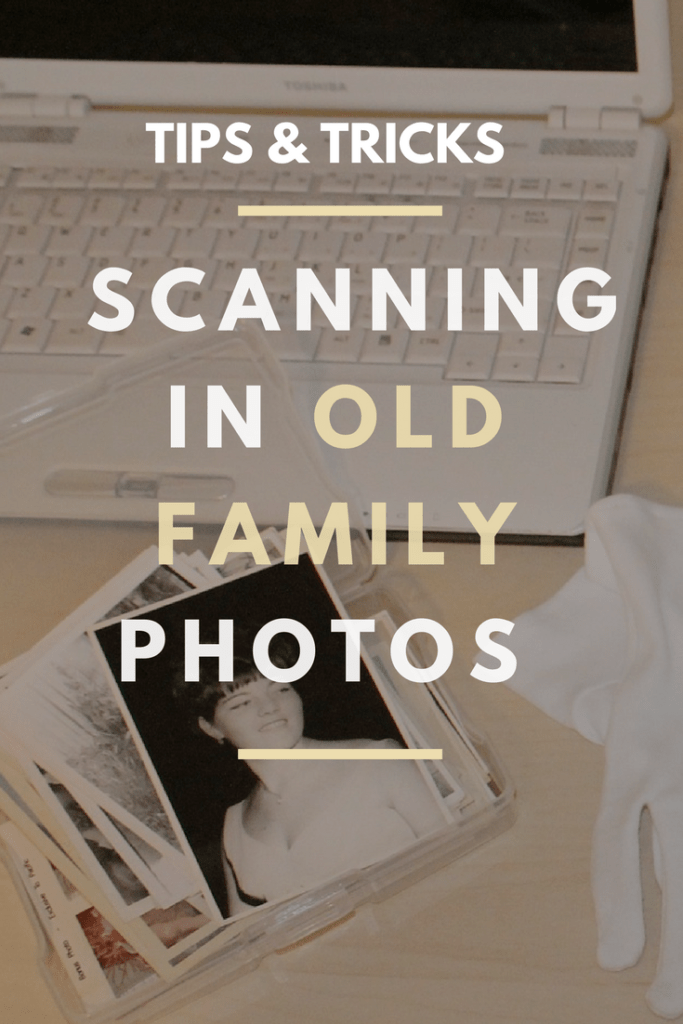 Gathering and Organizing Photos for Scanning

Although this guidance has nothing really to do with with any actual scanning, it is an important first step, especially if part of your goal is to also organize the physical copies of your photos.

So, if your family maintained perfectly organized photos in photo albums or boxes all neatly labeled and arranged by year (ahem, my husband’s family), then you can probably skip this post and wait for the next one.

Take an evening to yourself and do some very quick organizing.  You’re going to organize your photos just enough to get them ready for the next steps.

Dump.  Take one drawer full of photos and dump it in the middle of a clean floor with ample space around you.  Take a deep breath, put on some upbeat tunes, and have a pen, marker, envelopes, and photo baggies, all within reach.

Triage.  I call this step triage instead of sort or organize because your assessment of the photos has to be quick.  Don’t worry about chronology at this point, we are only “sorting” by general subject.  Trying to sort chronologically at this point will drive you crazy.  When I triage a drawer, I have several piles, including:

Label and Put Away.  Now it’s time for a break.  But before you can do that, we’re going to put your triage piles in envelopes (for smaller piles) and large baggies (for bigger piles).  Put the photos into an envelope or bag, and label the outside of the bag or envelope with the pile’s name/category.  Congratulations.  Your photos are considerably more organized at this point!

Repeat the Dump, Triage, Stack steps until all your drawers of photos are in an appropriate triage pile.

Why is this process so important? Can’t I just scan them in and sort them into files later?  Ummm, sure. But, in my experience, this is not optimal. When I started scanning old photos, I followed this process.  It made the photos infinitely easier to sort into more detailed folders once they were on the computer.  (For instance, I just had to find the “Weddings” group and then I could sort it into “Mary and Joe’s Wedding” and then “Mark and Michelle’s Wedding.”)  About two years ago, my mom found a HUGE box of photos in the garage that were a disorganized mess.  I did not sort these photos according to this process.  Instead, I just scanned them willy nilly.  Ugh, organizing them digitally now has been a time consuming nightmare. Finding and sorting photos by thumbnail is a lot more annoying than sorting a physical 4×6” photo. So, I definitely recommend this process (or something similar), but if you’d prefer to skip it, go ahead.

If you have photos in albums, keep them in there, at least for now.  There were several albums that, as I scanned in the photos, I determined that it would actually be detrimental to keep them in the albums.  Those albums included many sticky page albums and albums that were yellowed or otherwise discolored and were affecting photo quality. Other albums that were in good shape I

Has anyone else organized drawers full of old photos?  What are some of your tips?

Creating an Emergency Kit for Home, Work, and...

[…] vacation, we can easily return with a combined 100+ gigabytes of photographs. Since I’ve been scanning in family photos for the last 4 years or so, storing those newly digitized photographs (which I scanned at a very […]

Perhaps I missed it….but I’d love to see the next steps in this series. Love your writing/topics. Thanks!