In our house, we always seem to have several projects going on at once. And even once a project is “done,” we still always seem to be tweaking things. Some projects are more useful than others, but one of the most frequently used technology projects in our house is our video distribution system.

Within a few weeks of moving in, I remember I was napping on the sofa (hey, unpacking is hard work!), and I was woken up to Ken practically skipping with excitement throughout the house and waking me up to show me the fruits of his labor (and the fruits of dozens of packages arriving at our door) from the previous weeks. 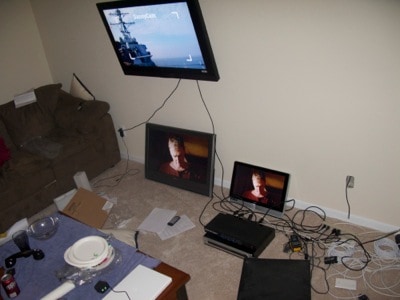 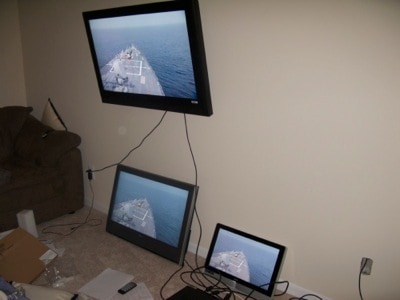 Meh, you may say. In fact, “Meh” is kind of what I was thinking in my half-asleep state. But Ken’s enthusiasm for his project was contagious!

So, what the heck is a video distribution system? Well, let’s start with what it’s NOT. It is not synonymous with home theater. However, it can be how your home theater system operates.

Let’s take a look at what a video distribution system allows you to do. 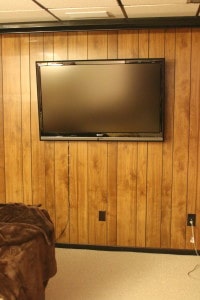 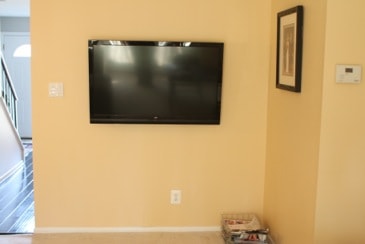 Notice anything about these photos? (Besides the wood paneling in the basement?)  NO components! No cable box, no DVD player, no TiVo, no Play Station, no Wii. Does that mean that we watch basic cable or whatever you can watch without a cable box or DVD player? Nope!

All of our components are in one closet in our house. We affectionately refer to it as the server room. Although that may be a bit of a misnomer. It’s more like a command center.

All of our components are located in the server room, and are wired to each television in the house. This allows multiple TV’s in the house to simultaneously watch, for instance, a DVD on the DVD player or Blu-Ray on the Play Station 3.

How do you make your own video distribution system?  For the non-technologically oriented (like me!) the following sentences may sound a bit scary. But not to worry. I have Ken explain everything to me, and once I know that I can understand it, I know others can understand it and build it themselves in their own homes.

Before you begin you have to figure out or decide if you even want a system like this, depending on your setup it might be overkill or not even doable. For starters if you only have one TV you probably don’t need to do this. The whole point is to allow you to use the same components on multiple TVs. If you only have one TV this it probably makes the most sense to just keep all your components near to that TV. Also if you are going to this trouble it would make sense that you have modern equipment, by that I mean HD TVs with HDMI input, and components with HDMI output. You can get away with a couple of exceptions (the Wii, for example does not have HDMI) but the majority of your devices should have HDMI.

And, once you get the basics down (which we’ll explain to you over the course of several posts), you’ll realize that even a technology beginner can build this in their homes.

[…] weeks ago, we talked about one of our most frequently used technology projects in our house, the video distribution system. We actively use that on a daily basis. However, we also have another fun DIY home technology […]

[…] a relatively complex setup in our house, which we discussed a few months ago when we described our video distribution system. We have a dedicated home server, called a NAS, or Network Attached Storage, drive. We put files on […]