When we tell people that we went to the Olympics in Sochi, the response is almost always universally the same. “Wow, did you have fun?” followed quickly by “Was it as bad as they said it was?”

Our answer is always no, it was not as bad as they (meaning as reported on the news and Twitter) said it was. We thought it was amazingly well organized, efficient, and above all, very safe, which we were so thankful for considering all the fear mongering leading up to the Olympics. The volunteers were friendly and helpful, the transportation was amazingly easy to figure out, and everything was clean and sparkling new. I think the only two complaints you’ve seen me mention on here so far have been the dreadful food selection at Olympic Park and the venues, and the three hour line just to enter the souvenir store.

But, since everyone always seems to be so interested in what was “bad” at the Sochi Olympics, I thought I would dedicate a post to it. So, while we had no complaints about anything overall, there were a few things that made me scratch my head and say, “Wow, for $50 billion, I don’t think this should’ve been an issue.”

So, these things I am pointing out are, admittedly, very petty and did not detract from our enjoyment at all. This was also our first Olympics, so these types of things might be normal in all Olympic host cities! But since folks seem so interested, here you go …

Access for the physically disabled and building safety issues

I don’t claim to be an expert on how things should be constructed in order to accommodate the physically disabled. But, considering that Sochi would be hosting the Paralympics just a few weeks later, I was shocked to see things like sidewalk ledges that were way too tall, and no visible sidewalk ramps anywhere.

I’m not sure how tall this ledge was right outside of the Olympic Park entrance, the you can see that it is nearly up to the knees of the woman walking ahead of us. And we didn’t see a ramp anywhere. 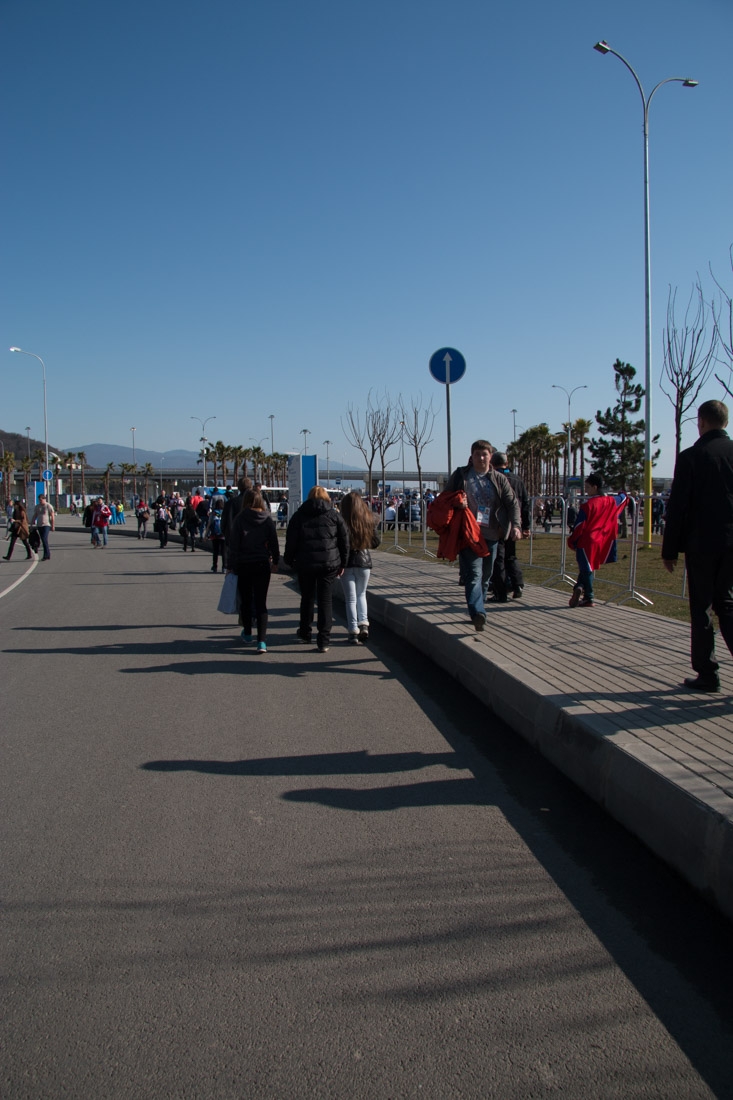 There were no handrails on this main staircase inside the Adler Arena, where we saw the speed skating event. But, in their defense, there was an elevator right next to the stairs, but I did find it a little disconcerting as I climbed the steps, especially considering I’m such a klutz! 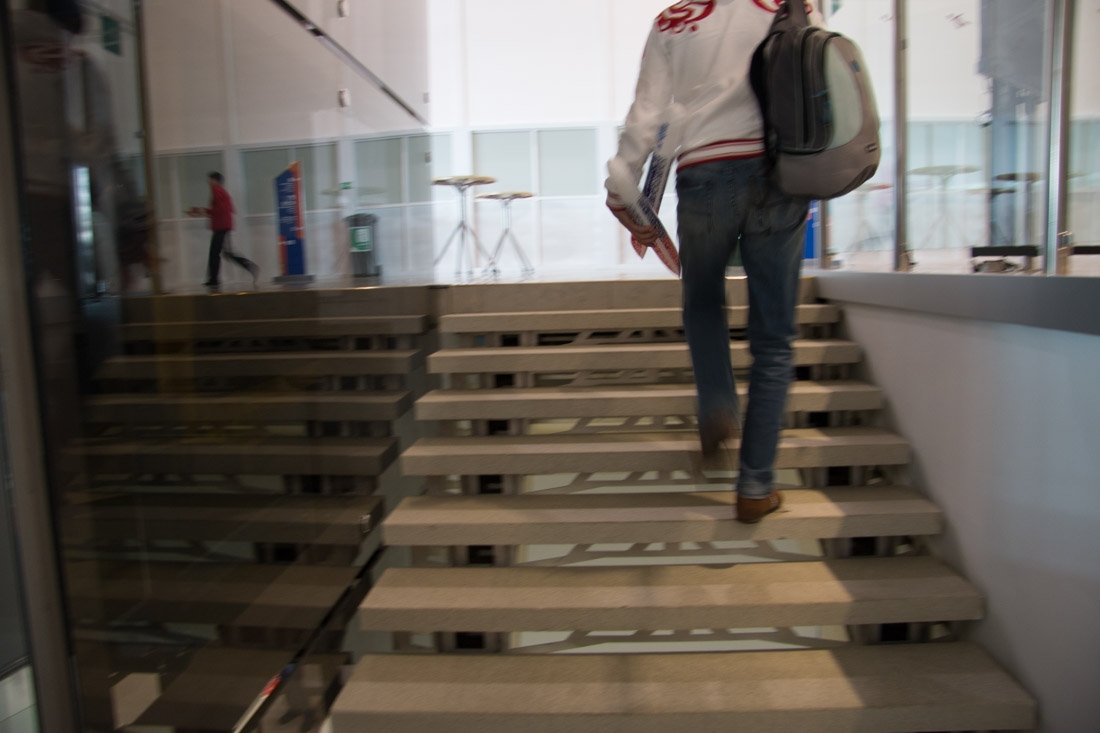 This ductwork in the hallway to get to our seats at the speed skating arena was so low, that we had to duck to walk under it. No caution tape, no padding, nothing. Seemed a bit dangerous for anyone distracted while walking. 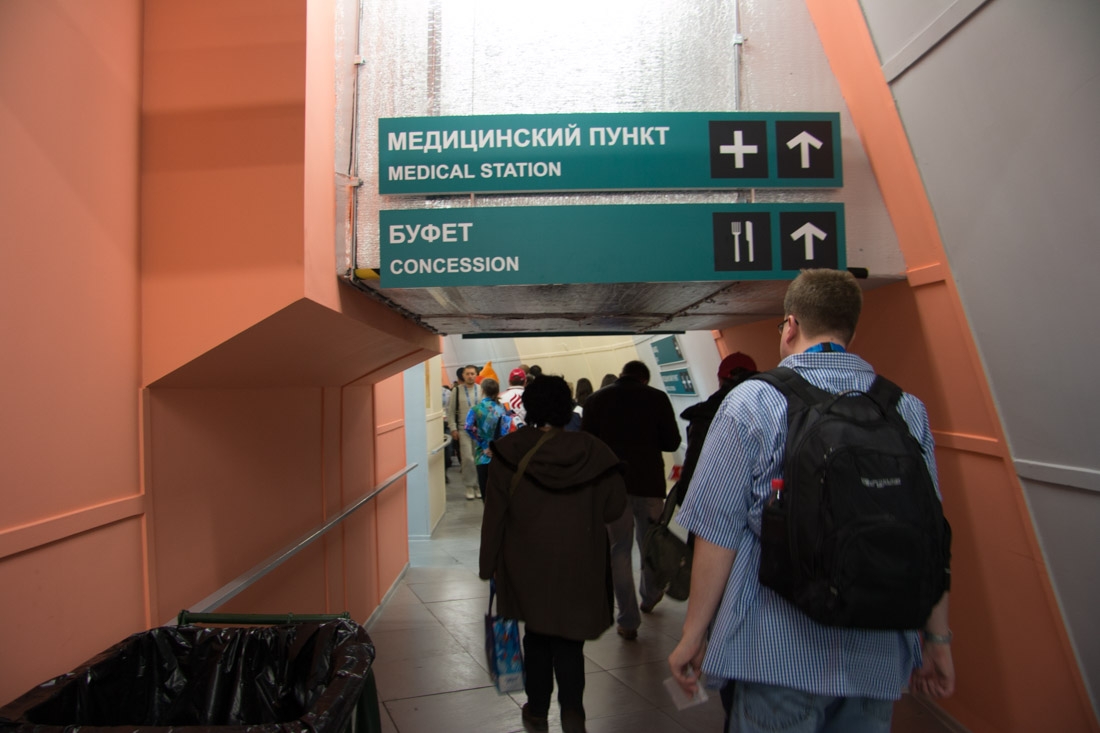 Oh the Scaffolding and Fences

EVERYWHERE. Fences to cover unfinished stuff. Even scaffolding standing in for what looked like should have been the location of a permanent structure.

For instance, this elevated pathway looked like it should have been home to a permanent structure that was never finished. This is right by the Adler Arena and directly behind the medals stage. 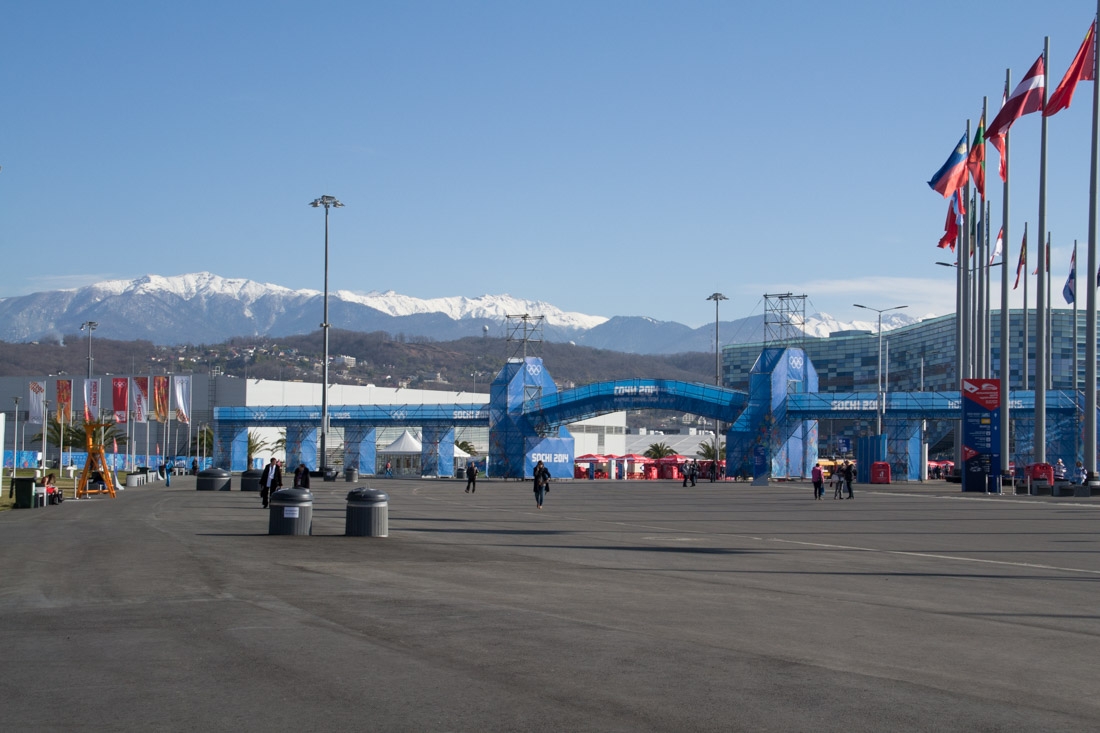 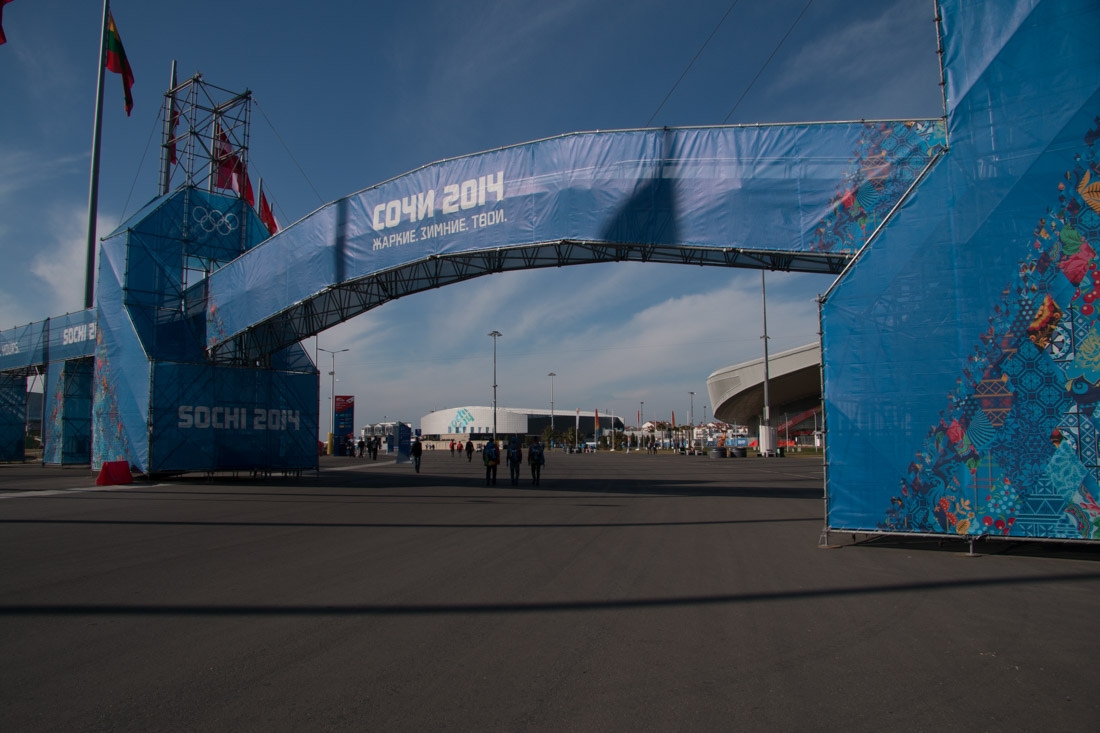 And there was a lot of fences surrounding the venue that hosted the Opening and Closing ceremonies. 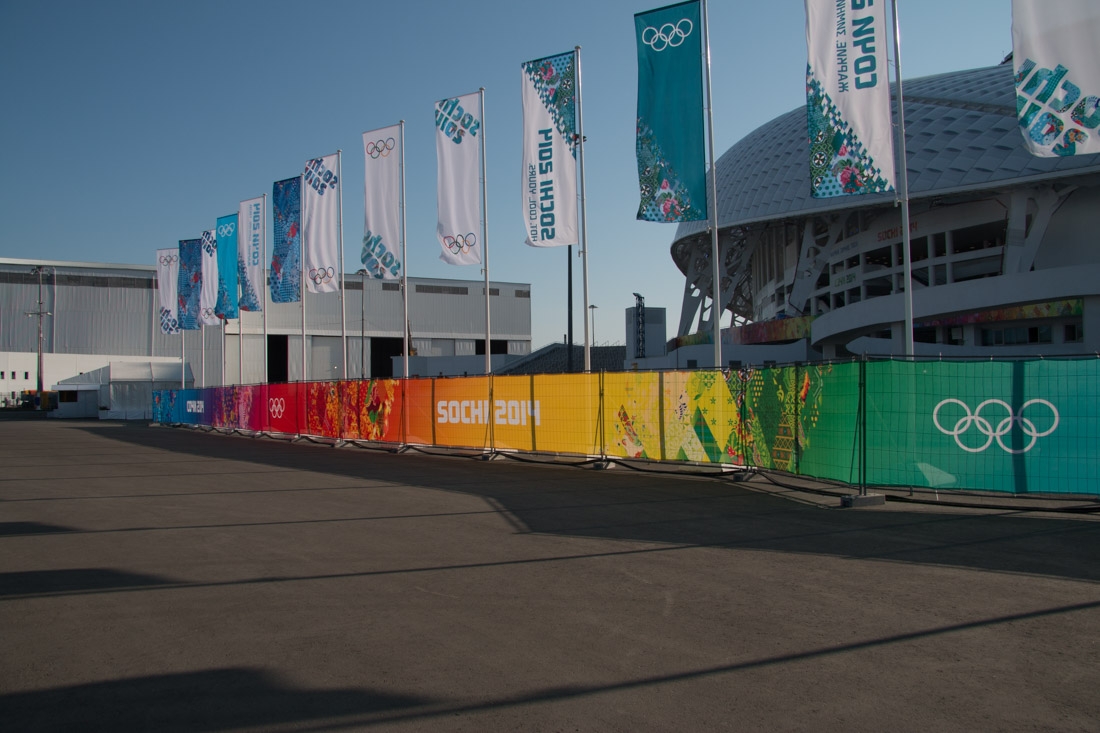 And these fences with bright orange feet around what appeared to be some sort of media building. 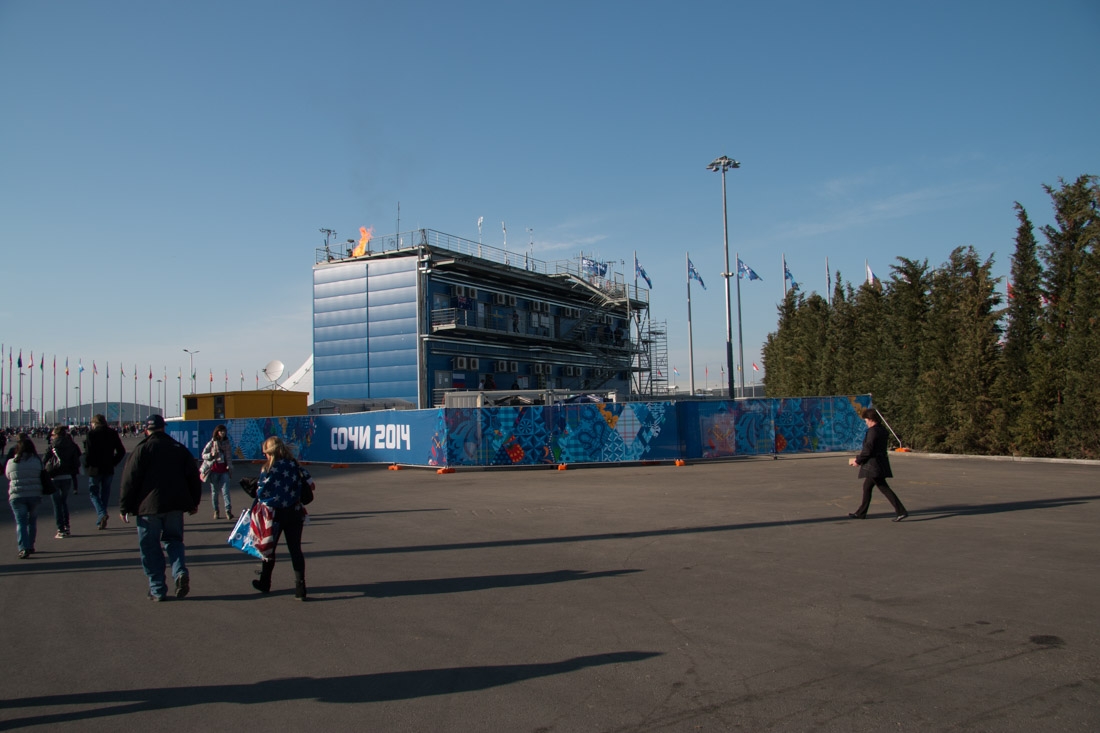 Fences hiding what should have been landscaped areas but instead were housing some sort of equipment. 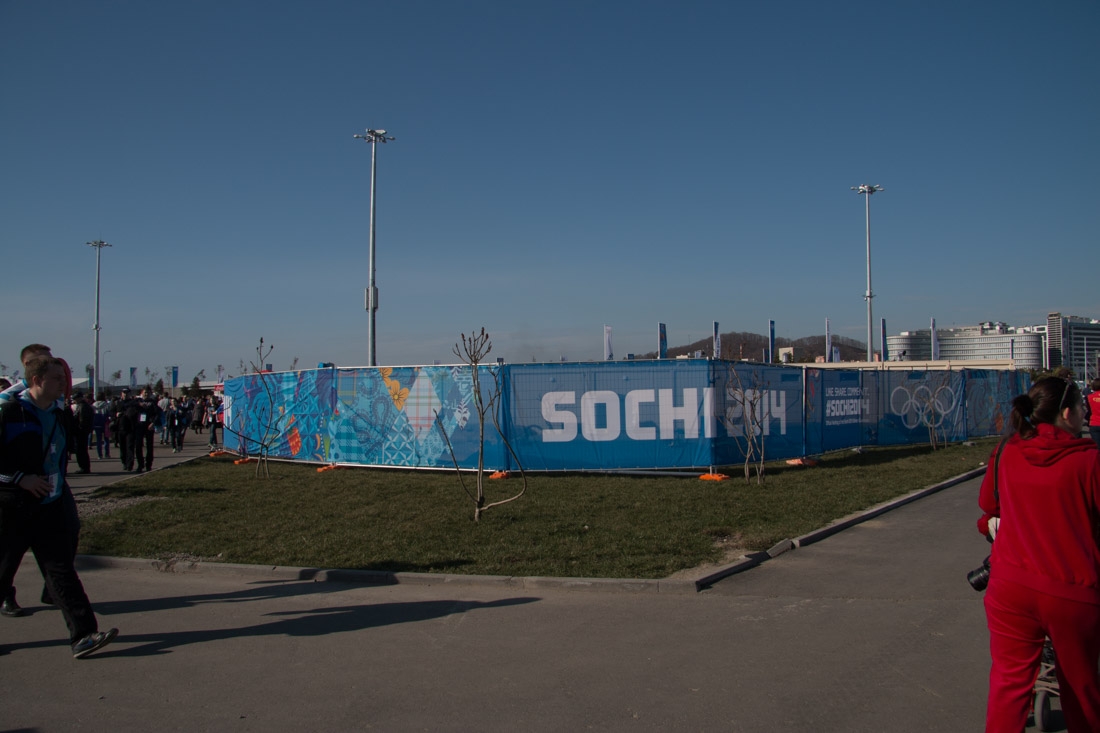 And I was really surprised at all of the ugly equipment and fencing just off to the side of the Olympic flame. 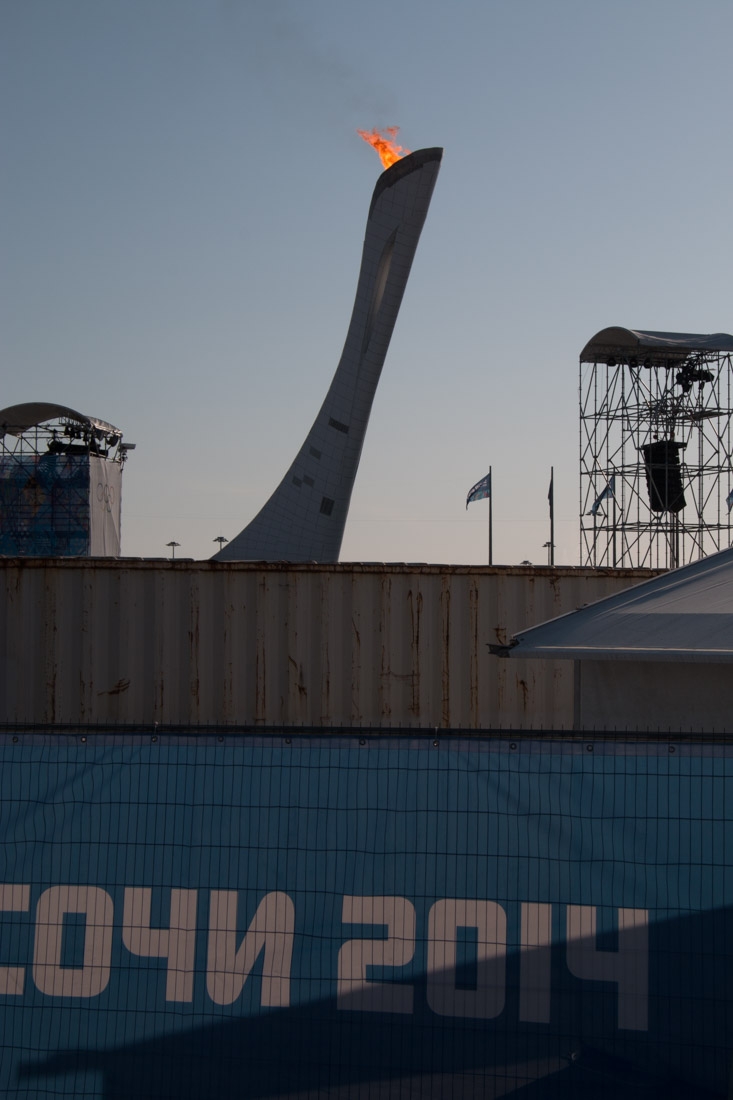 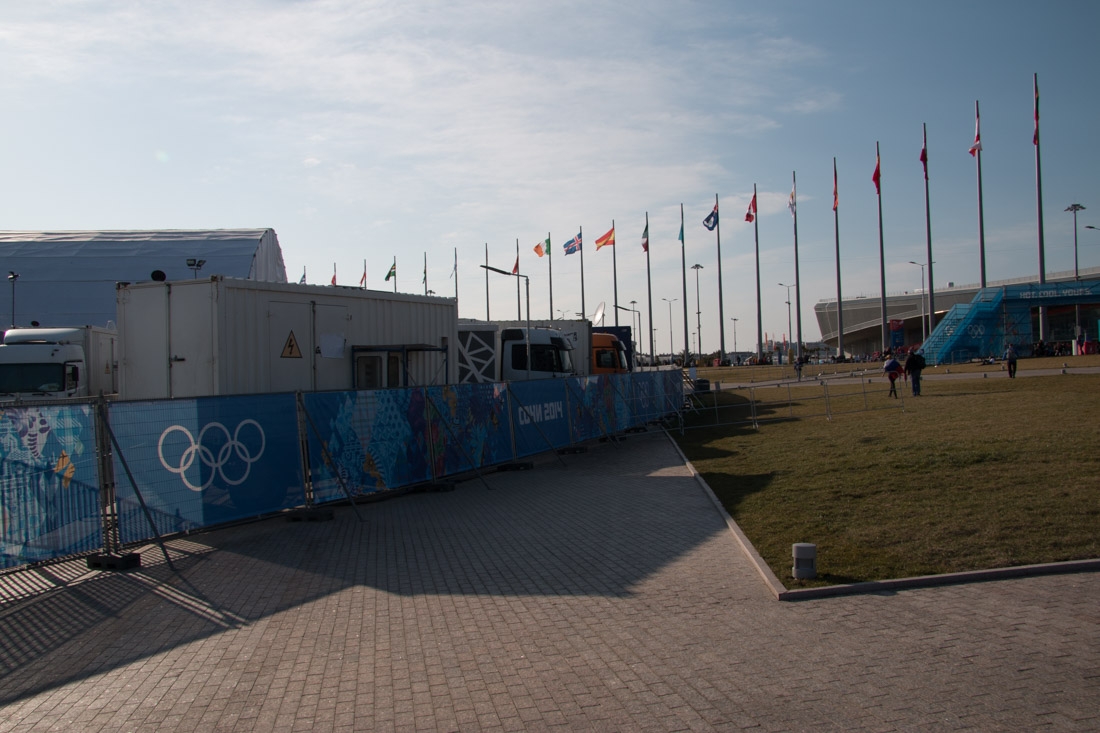 All of the grassy areas did not look healthy and you could still see the sod seams. But others were just completely unfinished. Here was an area right by the Samsung exhibit inside Olympic Park. There is a single row of sod (bottom of photo), and the rest is just dirt and no trees or shrubs. 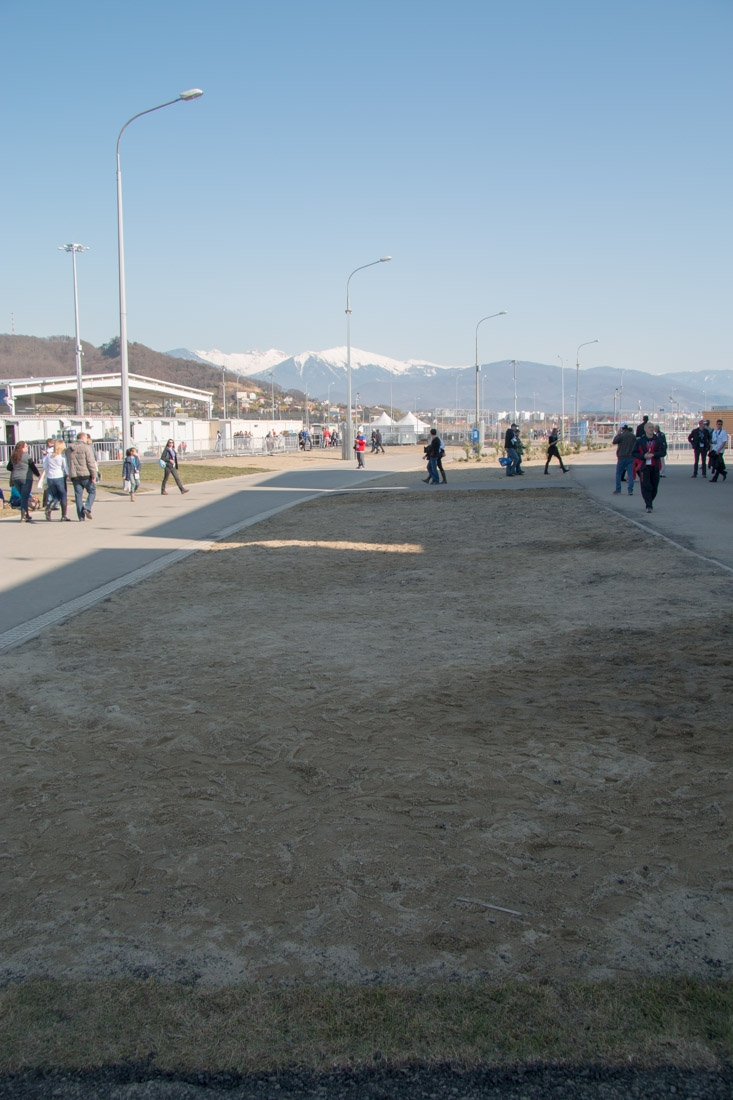 Other areas had some trees and shrubs, but still no grass. 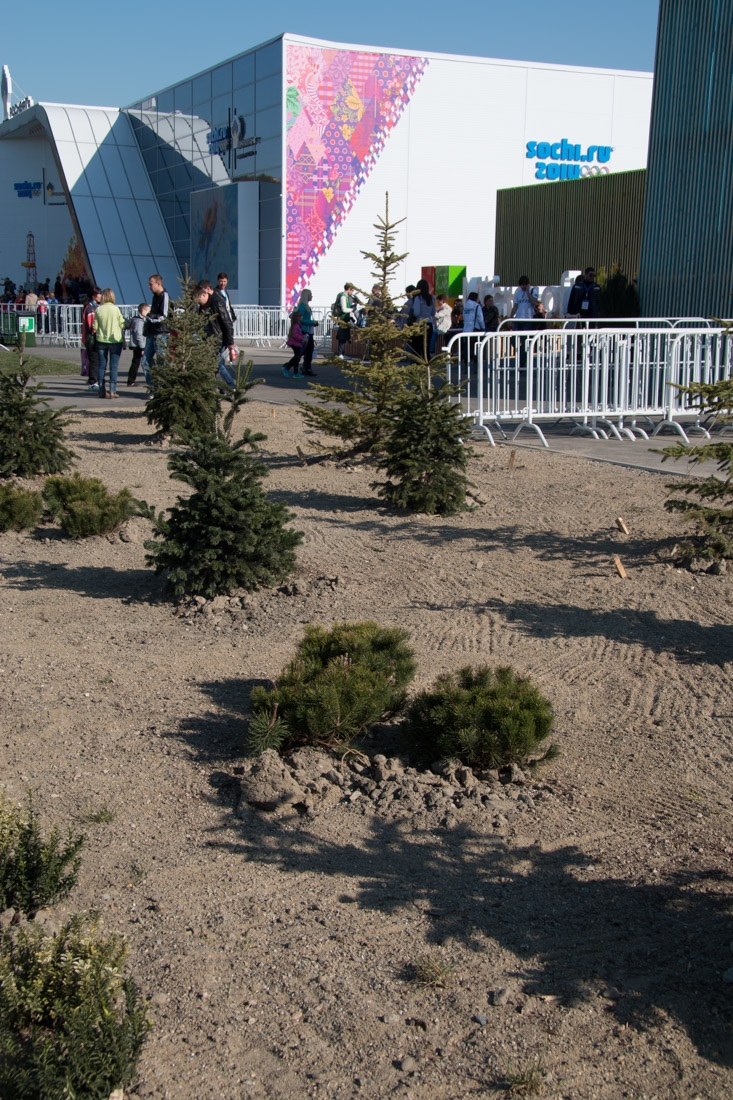 The Parking / Taxi Drop Off Situation

Our primary form of transportation from our cruise ship hotel was taxi. There was no organized drop off point for taxis to drop off their passengers. Instead, the taxi drivers would pull into this insanely disorganized parking lot-type area and drop off passengers there. Then we’d have to maneuver through parked cars (and moving cars) to get to the Olympic Park entrance or to the train station. There’s a ton of empty space in Sochi, so I’m not sure why they couldn’t have had a better situation figured out for this. 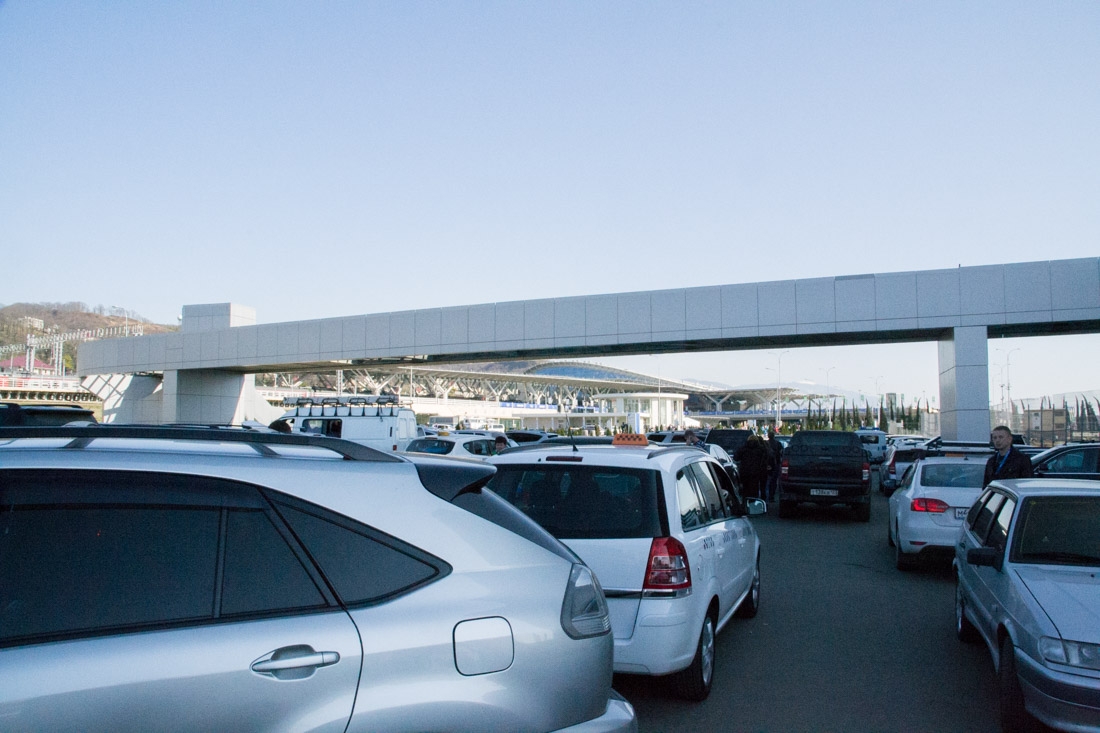 And there you have it. Those were my primary “complaints.” And even then, they’re not really complaints as much as just shock that those things should certainly not have occurred considering the $50 billion price tag of the 2014 Winter Olympics in Sochi. And you can see in my previous posts about the Olympics that everything else was so beautiful and amazing!

Did you go to the Sochi Olympics? Did you see any of the same issues?