For the first 16 years of my life, traveling with my family, I thought checking luggage was something you always had to do.  We always checked bags.

Well, when I was 16, I went on my first international trip without my family, with a group from high school.  Although I probably didn’t quite appreciate it at the time, my mom was a nervous wreck.  She ended up having me pack things for every possible contingency.  Full size bottles of shampoo and soap, a full box of band-aids, a portable alarm clock (hey, this was 1997, we didn’t have cell phones to use as alarms!), a box of cold medicine, a full bottle of Tylenol, a full tube of Neosporin … You get the idea.  I just kind of mindlessly followed her lead.

I should also point out that my family has a quirk, which I never realized was a quirk until I like went to college.  (Isn’t it kinda crazy how you never question things as unusual until you start to observe other people).  So, my family, for instance, only wears a pair of jeans once and then washes them.  Really, any clothing.  We’d only wear it once, then it had to be washed.  Jeans, skirts, even things like bath towels.**   We ALWAYS did laundry.  And now I understand why I was never allowed to buy anything that was dry-clean only!  Because my mom probably thought I’d have to take it to the dry cleaners any time I wore it!

Anyway, I’m describing this quirk to also illustrate the sheer QUANTITY of clothes I had to pack for a two week trip to Europe.  Pretty much wearing every item only once (because the HORROR of wearing something more than once without washing it.  Imagine!)  But for things I didn’t have enough of, of course I also had to pack Woolite in order to wash things in the sink.

My goodness, this all sounds so ridiculous as I type it.  But I just never even thought there was anything unusual about it!

Needless to say, I had to check my bag.  Two bags, in fact.  Plus the bag I carried on.  Ah, 1997.  Prior to outrageous checked bag fees and overweight charges.

I feel pretty stupid for saying this, because it seems so obvious, but perhaps I can blame it on being 16 and naive, but I hadn’t really thought ahead to the fact that I was going to be responsible for lugging these bags among eight cities in two countries.  From hotels to buses back to hotels to a ferry from Italy to Greece to another bus, to another hotel, to a tiny cruise ship cabin, to the bus and to the Athens airport.

I was one MISERABLE 16 year old girl.  Especially because several of the hotels didn’t even have elevators.  I was literally ready to throw away the two suitcases I had checked after the second city of the trip. 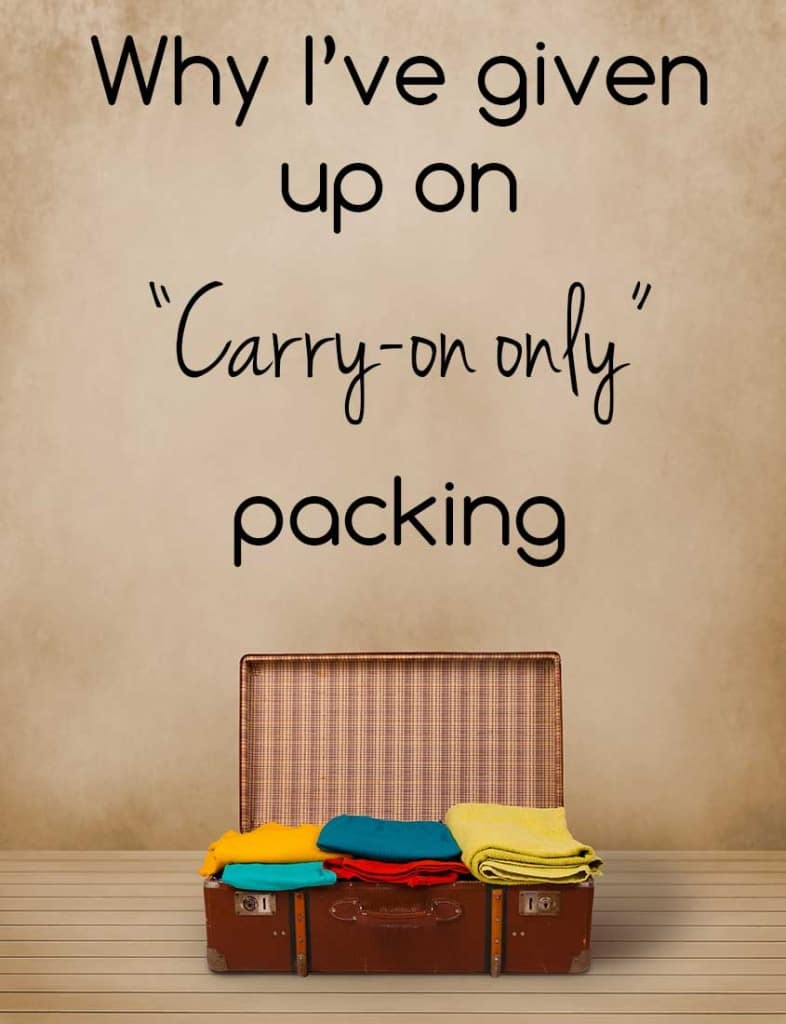 The Carry-On Only Obsession Begins

Two years later, when I was 18, I was going on another international trip right after I graduated high school.  To my mother’s dismay, I was only bringing carry-on bags.  “But the band-aids! But the full bottles of shampoo!  What would I do if I ran of of shampoo!?” “What do you mean you’re going to wear pants more than once! You’ll be walking around in filth!  I was firm in my decision.  No checked bags.  Granted, my carry on’s were pretty loaded up, but everything fit! And in 1999, airlines didn’t seem to have such strict weight restrictions for carry-on luggage.

And guess what?  That habit stuck for years.  There were very few trips in the next 15 years that I had to check suitcases. 1) When I lived abroad for nearly a year, 2) When I spent three weeks in Oregon for a work trip, and 3) For cruises, because I’d usually require a multitude of different clothes for cruises (dressy for dinner, casual for touring, swimsuits, etc.).

But then something unfortunate started happening.  Between 2003 and 2007, my checked bags (the grand total of about five times I had to check them), started getting lost.  Er, “mishandled” in airline speak.  On my Cairo>Paris>Philadelphia>Pittsburgh trip, I had to pick up my checked bags in Philly for customs and then recheck them to Pittsburgh.  Lo and behold, my bags were somehow lost on that 35 minute flight.  Then in 2007, we went on our Caribbean cruise, so I checked a bag.  On our way back from Puerto Rico, my checked bag was, once again, mishandled.  Then again in 2007, I was traveling to Portland, Oregon for three weeks for work, so I checked a bag.  I was on a nonstop from Washington Dulles to Portland.  When I arrived in Portland and my bag never arrived at baggage claim, I went to the luggage office.  They said, “Oh, your bag is still in Denver.”  I’m like, “Umm, But I was never in Denver!”  I have no idea how my bag made it to Denver.  But, United delivered it to my hotel the next day.

There were a few more lost bag incidents.  Although I always got them back unscathed, it was enough for the paranoia to set in.  What if one gets REALLY lost next time?  I know this sounds vain, but I think it would really put a damper on my trip!

So, I became obsessed.  OBSESSED with carry-on only packing.  Didn’t matter how long the trip. I was shoving everything in a carry on come hell or high water!

But then came some issues.

1) Non U.S.-based airlines are EXTREMELY strict with the weight limits of carry on bags.  It’s usually limited to just about 14 pounds, and you can only carry on that one bag (plus a small item). Keep in mind that an average carry-on with wheels weighs around 7 pounds just empty.  So that really only leaves you able to pack about 7 pounds worth of items in your bag.  That is NOT a lot.  A few articles of clothing, a pair of shoes, and some toiletries always put me over the limit.  And that didn’t include things like camera equipment, electronics, etc.

Although I was able to FIT everything in a carry on bag, the suitcase itself usually weighed closer to 30 pounds.  So this was always a problem when traveling overseas and trying to limit myself to carry ons only.

So, I started tinkering with non-wheeled based bags so that I wouldn’t be “wasting” any weight on the bag itself.  Granted, this was only necessary or trips abroad, but I was still so worried about losing my luggage again!

That brings me to the next issue.

2) I hate (HATE!) carrying a bag on my shoulder.  There is nothing quite like lugging a bag on your shoulder to the ends of the earth (er, ends of the airport terminal) and starting your trip with a sore shoulder.  I tried a few times.  I was miserable each and every time.

Finally, I reached the “F*CK IT!” phase.  I am back to being okay with checking bags for long trips.  I came to this realization just prior to our trip to Russia.

Remember what I said earlier about not having any trouble FITTING items into a carry on bag?  That it was usually just the weight that was a concern?  Well, packing heavy winter clothes for a two week trip became next to impossible.  Even though we were traveling Turkish Airlines Business Class, which had a higher checked baggage weight allowance than coach, there was still no way for me to both fit and come in under the weight allowance for my bags to Russia.

Tired of the Obsession.  Back to Checking Bags!

I finally had a realization.  I am spending WAY TOO MUCH TIME worrying about packing things so precisely in order to fit in a carry on bag and have everything weigh exactly what it needs to weight.  Seriously, it was a ridiculous amount of time.  Watching YouTube videos on the most efficient way to fold shirts, researching compression bags, researching ultra-light baggage.  It was terrible, and a complete waste of time.

Plus, it’s not like I’m just packing clothes and toiletries when I travel.  Photography is a big hobby of mine, so I always travel with my SLR plus two or three additional lenses when I go on a big trip.  That’s one carry-on bag alone right there!  Add in chargers for cameras, chargers for laptops (which yes, we need to pack so that we can backup our photos during a trip), and chargers for all our other electronics, that takes up a lot of weight and volume right there too.

So, I finally determined that it wasn’t worth my time anymore to shove every item in a carry on.  Sure, I still get nervous checking bags.  I’ve had them lost enough times for that to still weigh heavily on my mind!  But now, in the weeks leading up to each trip, I’m not researching (again, because I do it before EVERY big trip) better bags, lighter bags, ways to fold my clothes to save space.  Now, I just check a bag.  Easy peasy.  And I’m definitely not packing like my 1997 trip to Italy and Greece!  It’s just one checked bag.  And I should point out, that if I’m going away on a quick trip, I can still fit everything in carry-on bags just fine.

However, when I do check bags, I am still very cognizant about how my bags, a  mix of checked and carry on, “fit together” so that I can easily maneuver them and carry them.  For instance, no more than one wheeled bag per person, since it is next to impossible to wheel two suitcases at once.  Plus maybe a duffel bag that can rest on the luggage handle.

What about you?  Can you fit everything in carry-on bags?  Does it still come in under the weight restrictions for a lot of international airlines?

**I broke this laundry habit in like record time when I started college. I only had room for like three bath towels, and I found that I was having to do a load of laundry every three days at like four bucks a load (wash and dry).  Within like two weeks, I was using my towels for multiple days!

Granada and Toledo, Spain – Europe 2010 (Blast from the Past)