Back in January, I had to go to Seattle for five days for a work-related project. It was pretty short notice, and I knew that I wanted to stay at a hotel close to the office that I would be working out of.

There was a Hotel Monaco near the office that many coworkers recommended to me. Hotel Monaco is a Kimpton property, and I’ve never stayed at a Kimpton hotel before. (Although I have heard great things about them). I would rather bulk up my Starwood or Hyatt points. But once I saw that they matched status of other hotel programs, the Hotel Monaco just looked like such a fun and unique hotel, I really couldn’t resist.  (Update! I’ve now stayed at two Kimpton properties! Check out my review of the Kimpton Angler’s Hotel in Miami.  WE HAD A HOT TUB AND A PRIVATE PATIO).

In enrolled in their loyalty program, called InTouch. Then I e-mailed Kimpton Hotels to let them know that I am SPG gold, and requested a status match. Within a few hours, they e-mailed me back to let me know they had enrolled me in their Inner Circle (elite) status program.

You can read all about the Inner Circle program here, but what really sold me was the $10 credit to raid the mini bar (or to use in the restaurant’s bar) and the complimentary room upgrades.

I arrived at the hotel around 10:30 in the morning, and unfortunately there wasn’t a room available for me yet. So I freshened up in the lobby bathroom (I always feel so gross after a six hour flight), and rearranged my belongings. I put my suitcases into storage and then walked around Seattle for a bit until they called me around 1:00PM to let me know my room was available.

I was booked in a Monte Carlo Suite on the top floor of the hotel.

First glimpses of the room 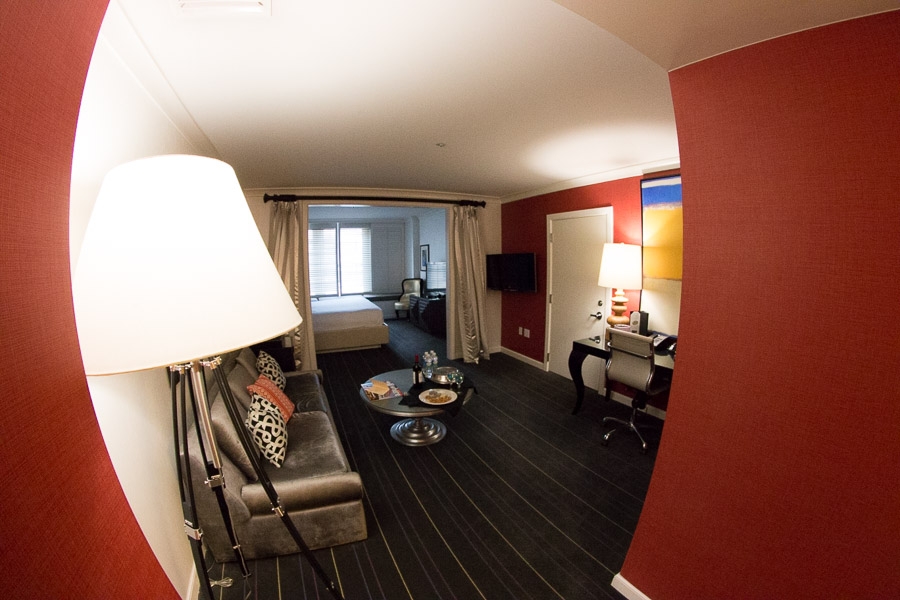 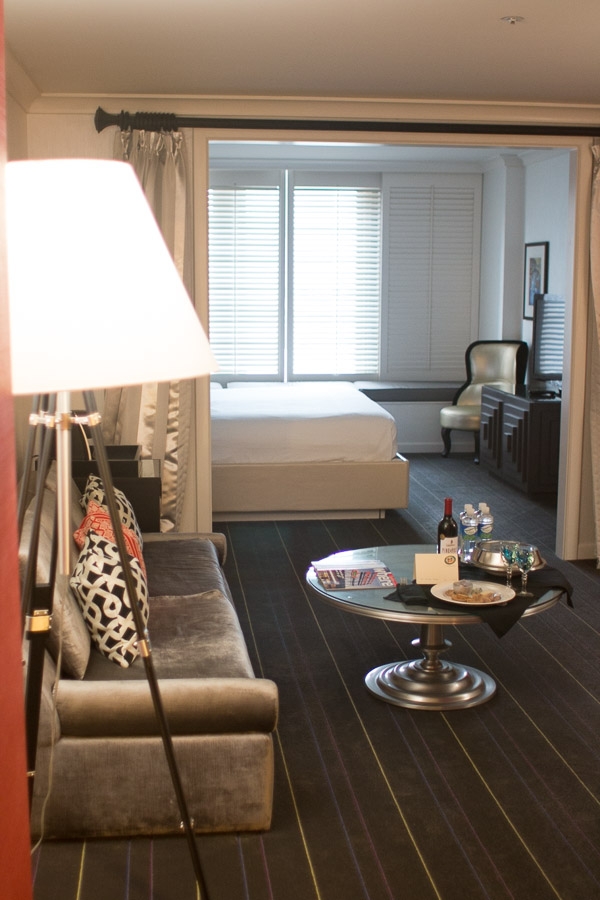 There was a separate “living room” and bedroom. The living room had a decent size sofa. 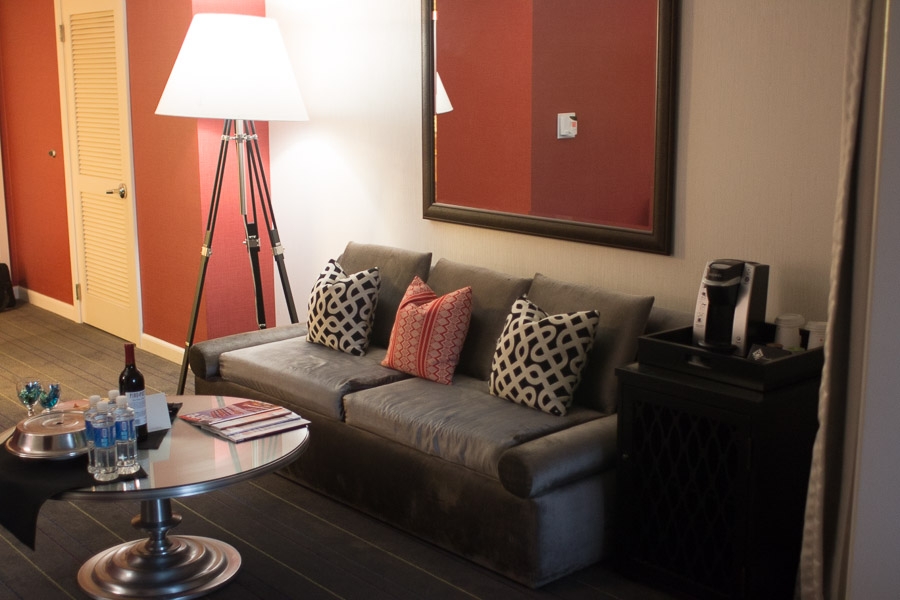 Next to the sofa was a Keurig coffee maker. 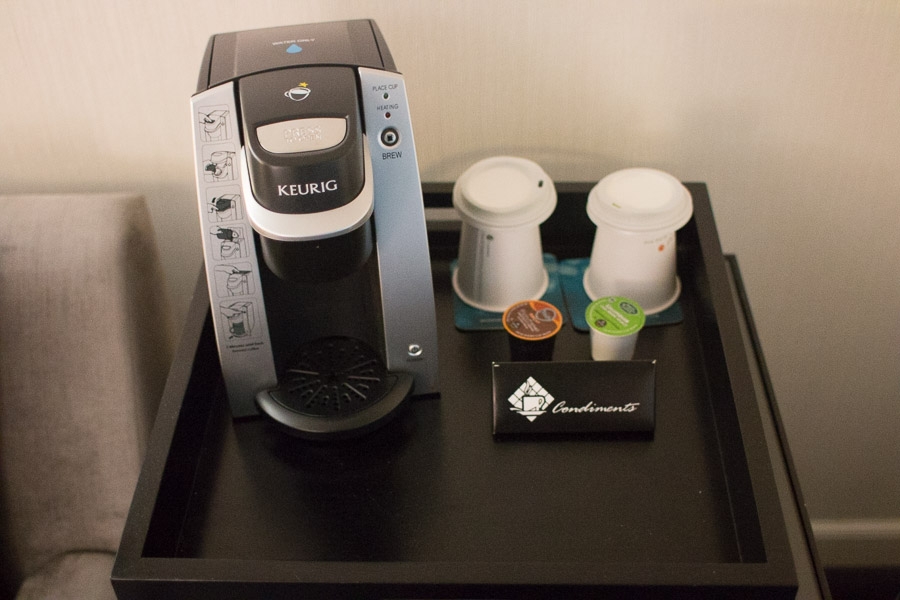 And across from the sofa was a flat panel television that was about 32 inches. 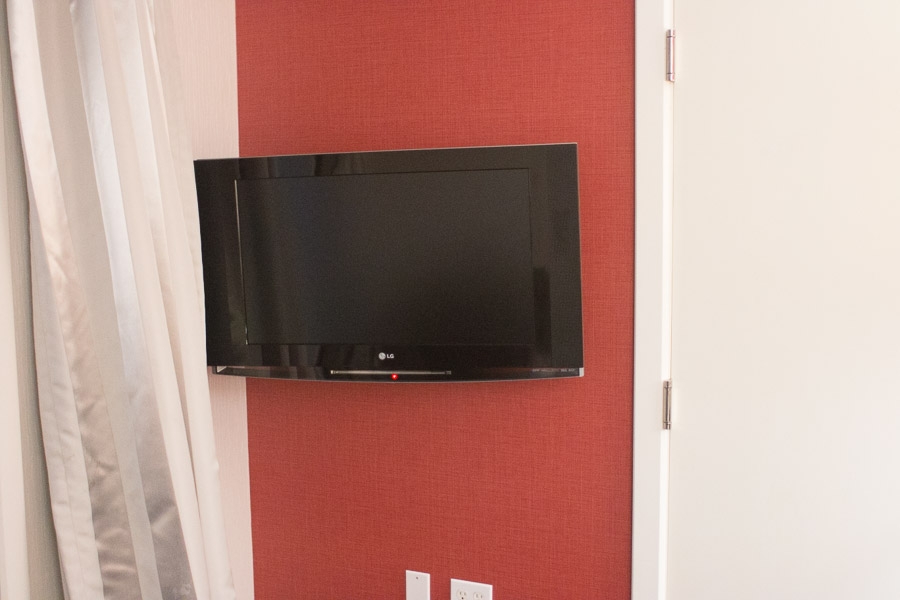 Also in the living area was a desk that contained easily accessible outlets, and perhaps the strangest amenity (amenity?) I’ve ever seen in a hotel, a goldfish named Oprah. 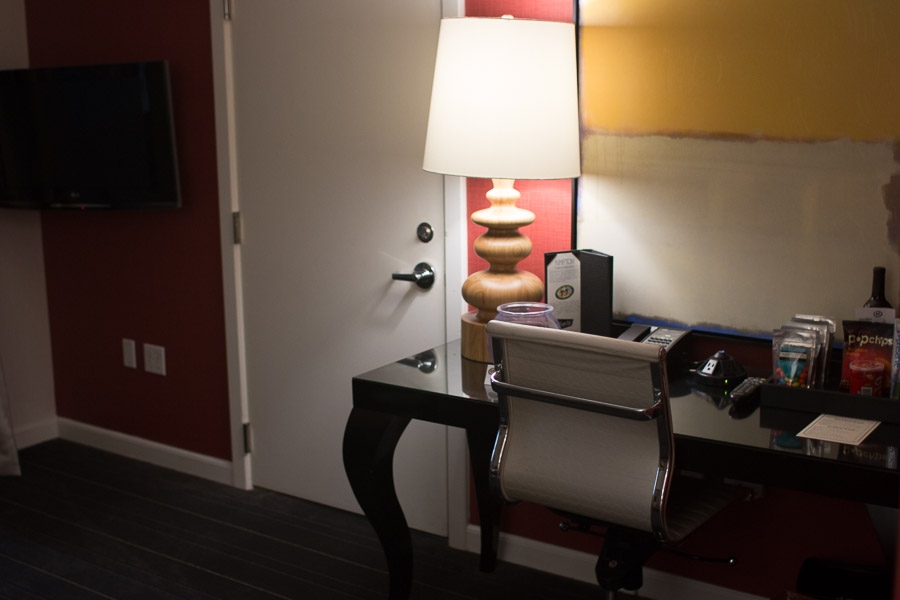 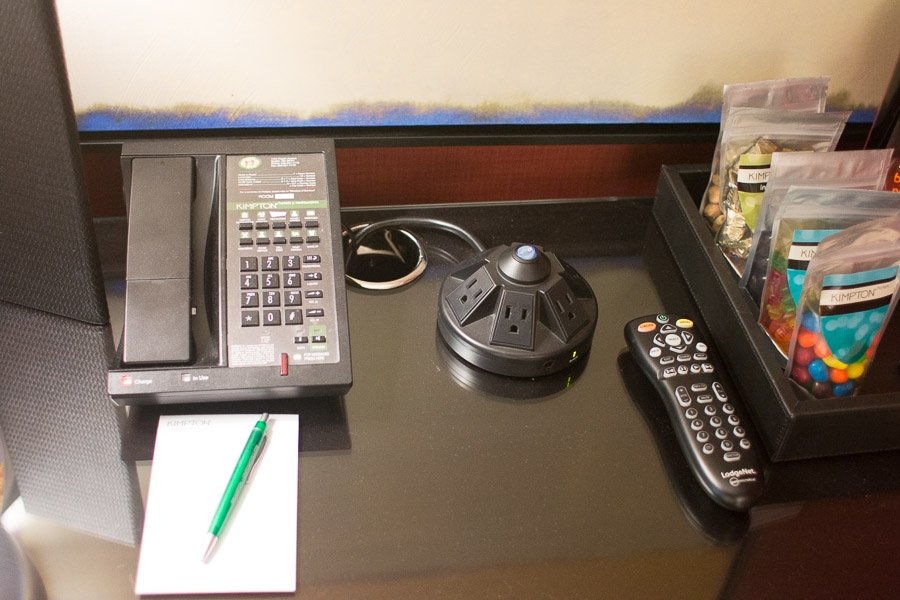 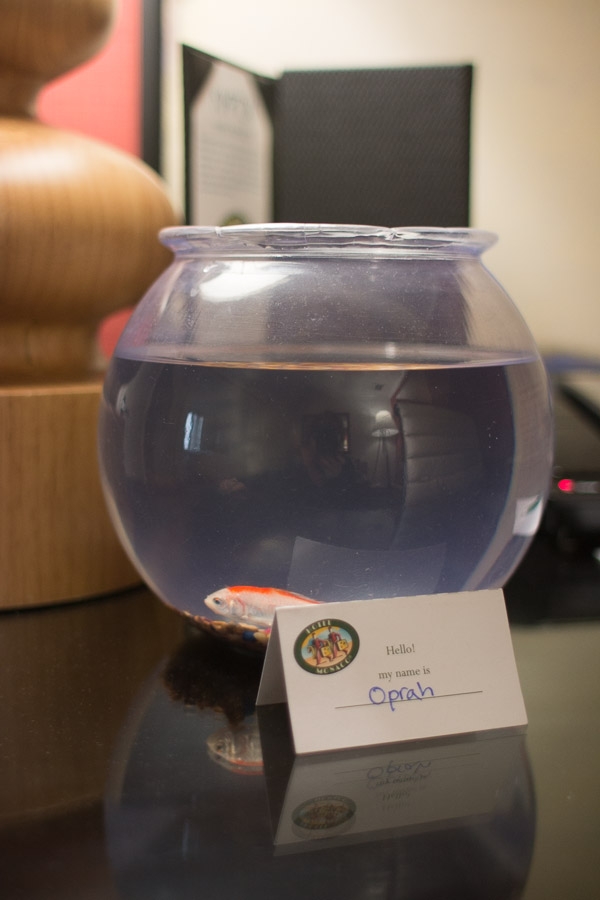 The “living room” area was separated from the bedroom by a set of heavy curtains, although I was never able to actually close the curtains. I’m not sure if that is by design or if my curtains were just stuck. 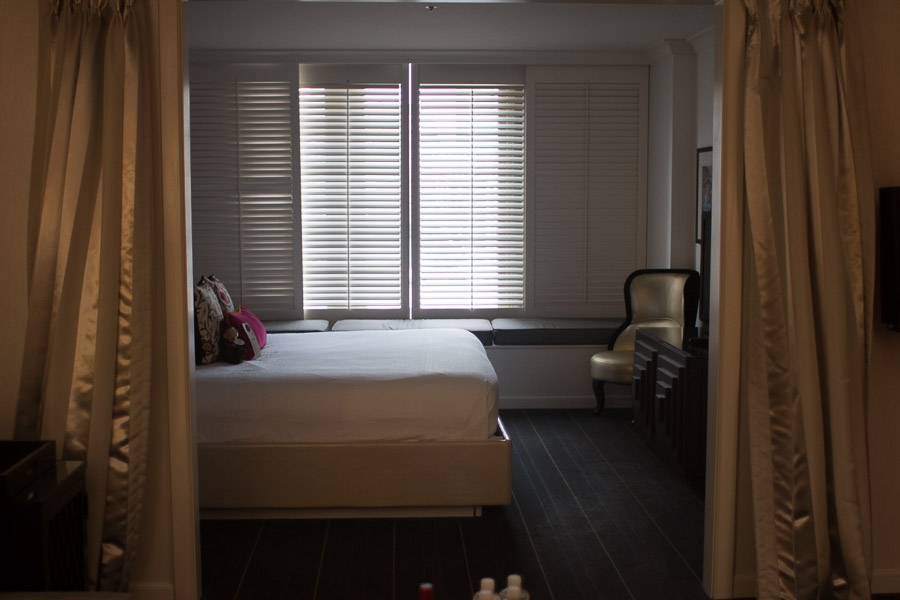 I had a king size bed, which was very comfortable. 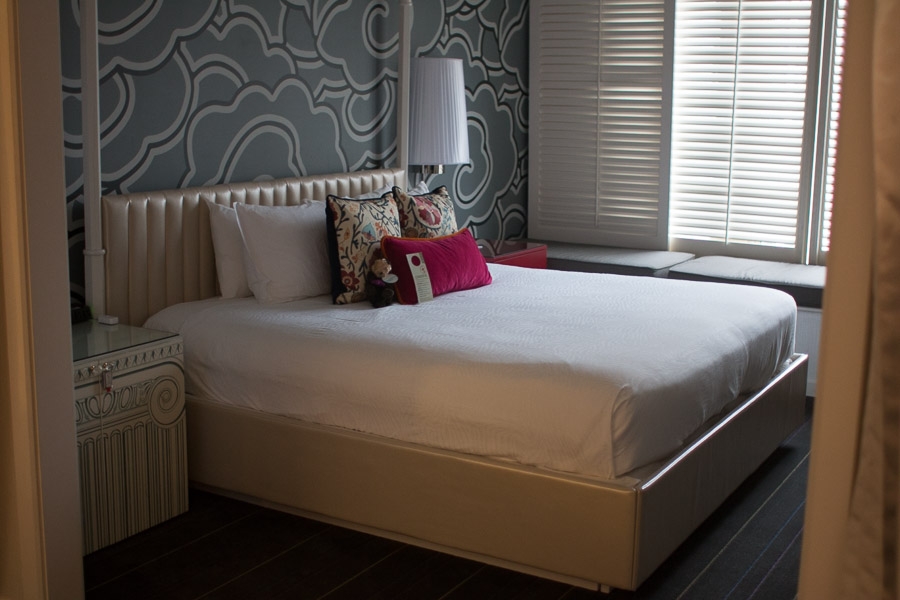 And there was some very nice window seating in the bedroom area! 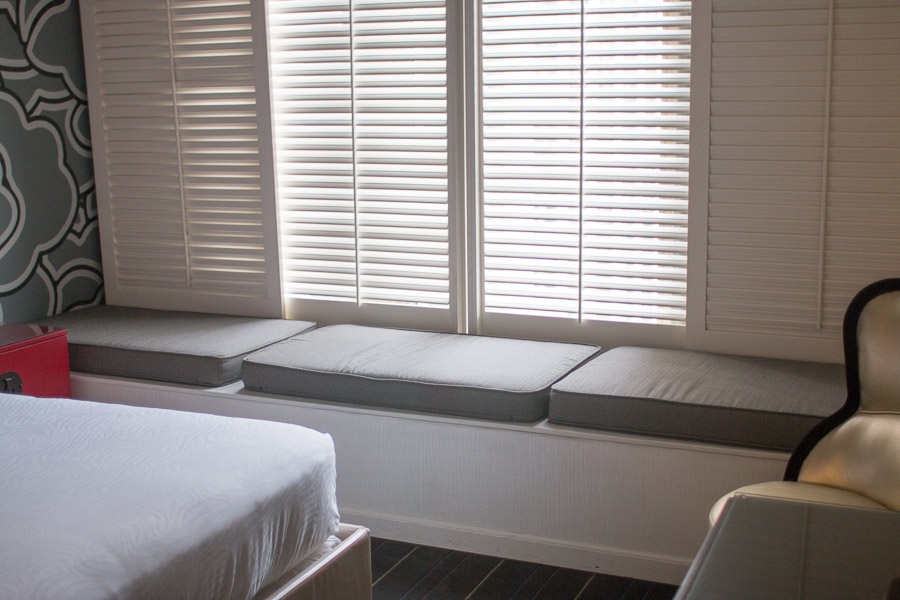 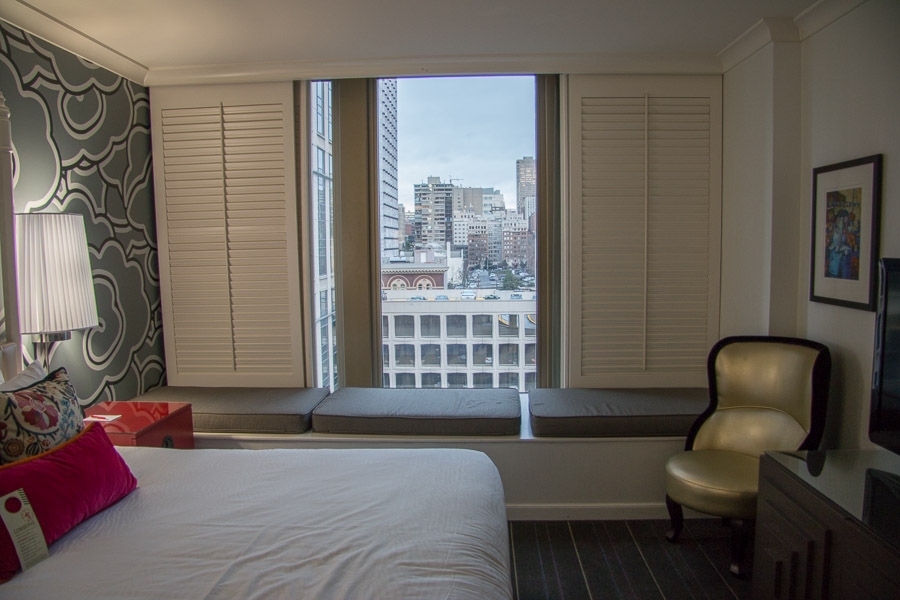 There was also a TV across from the bed, which was literally about 15 feet from the TV in the living room 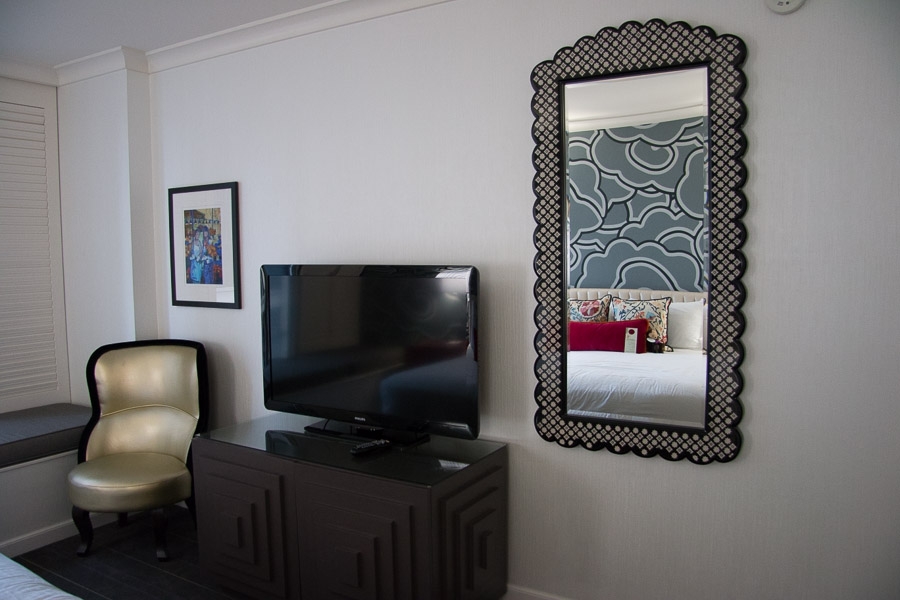 There were several power outlets on the nightstand right next to the bed, which is a HUGE convenience, and I’m not sure why more hotels don’t do this. 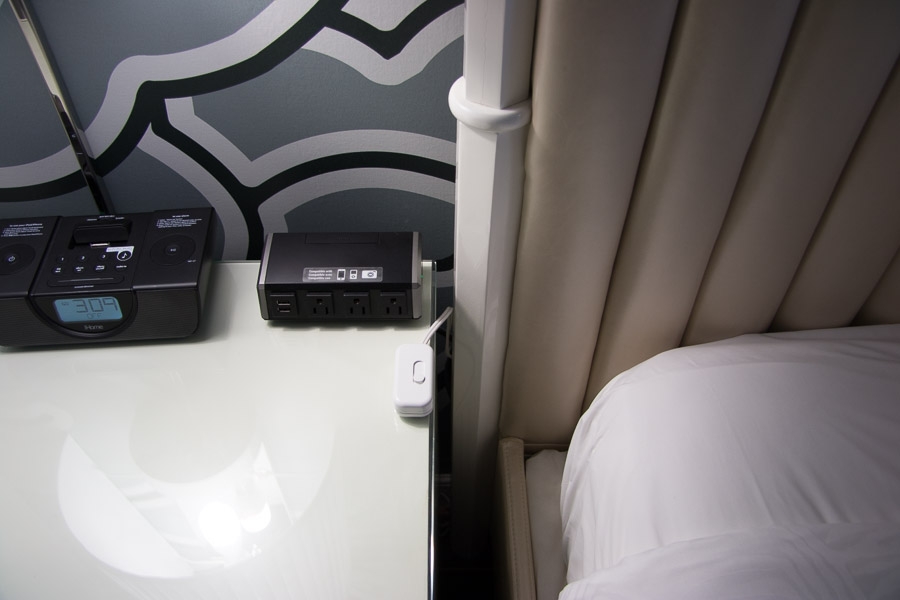 Next to the bed, hidden by the nightstand, was a well-stocked refrigerator and champagne classes. 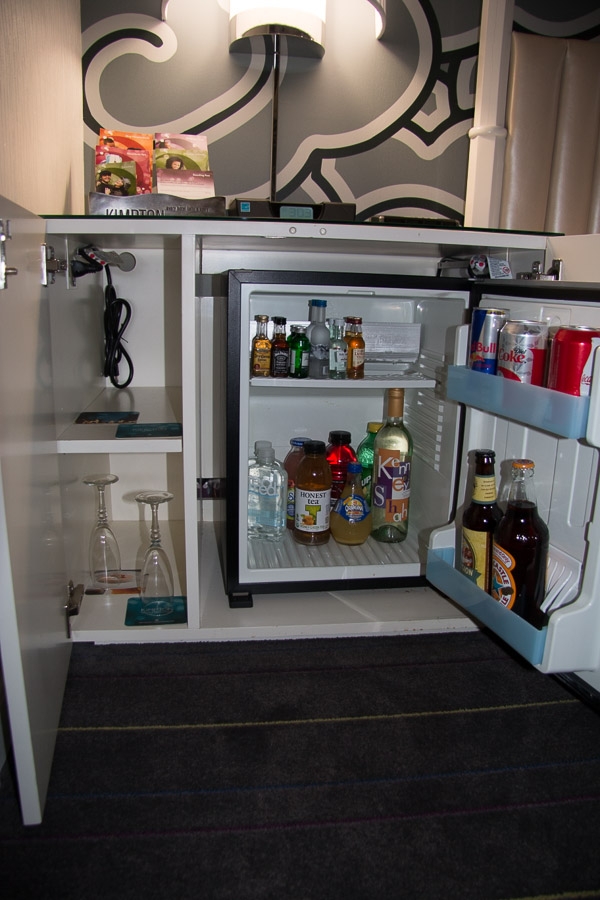 Compared to the rest of the decor in the hotel room, the bathroom was very basic, but clean and functional. 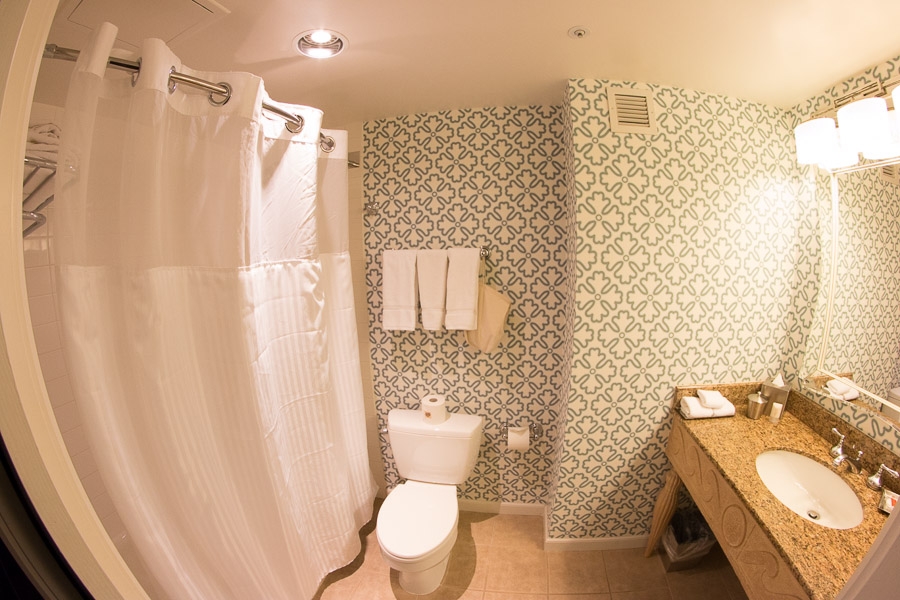 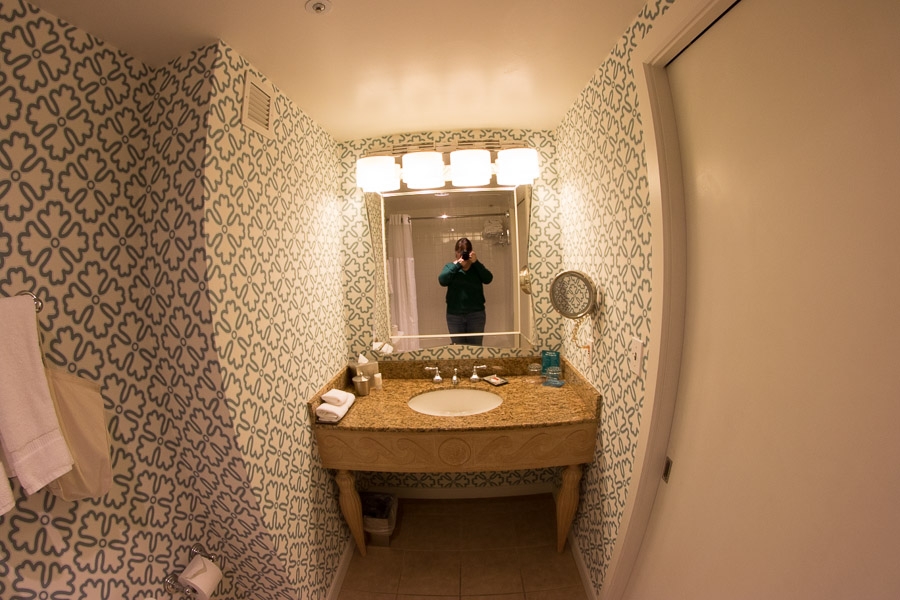 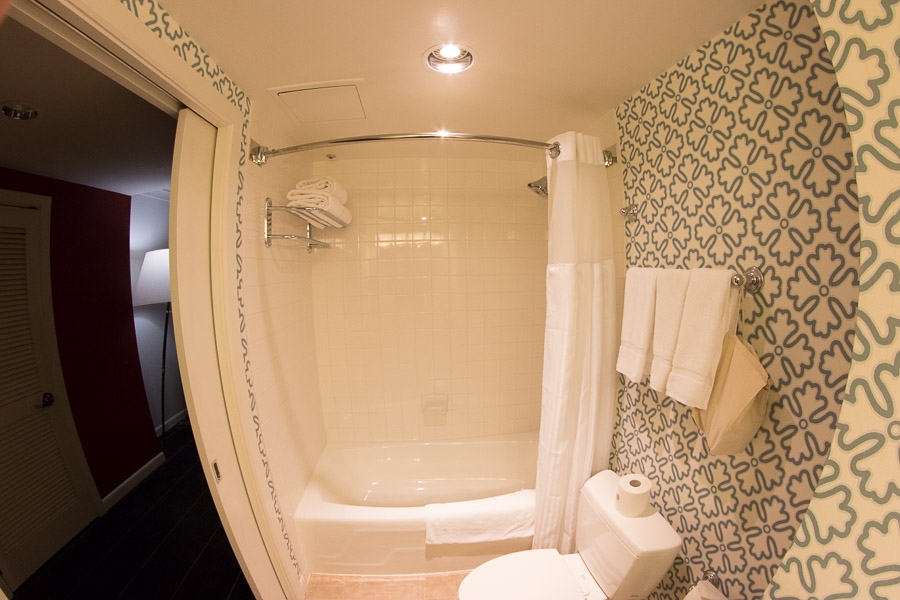 They had Gilchrist and Soames toiletries in pumps. 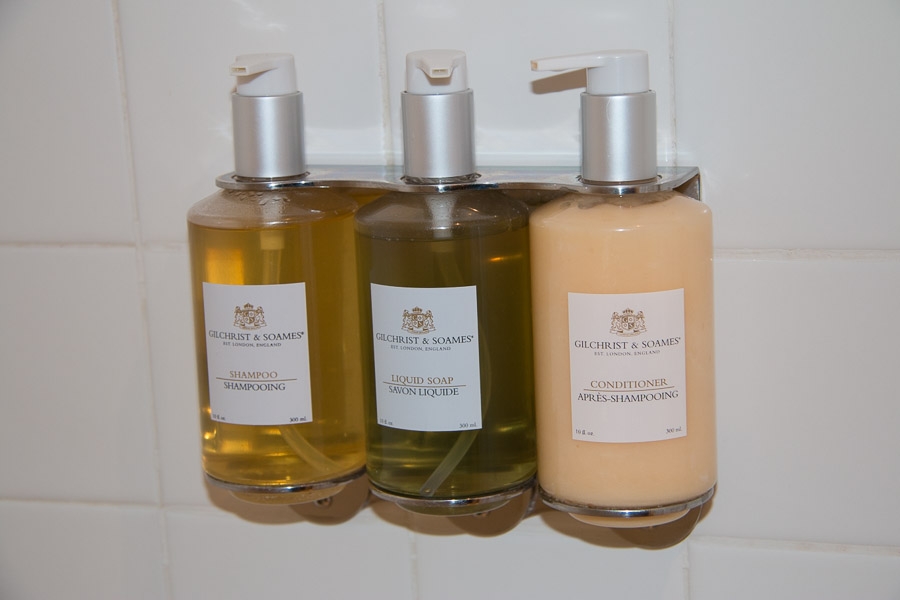 There was a decent size closet and a safe for your valuables. 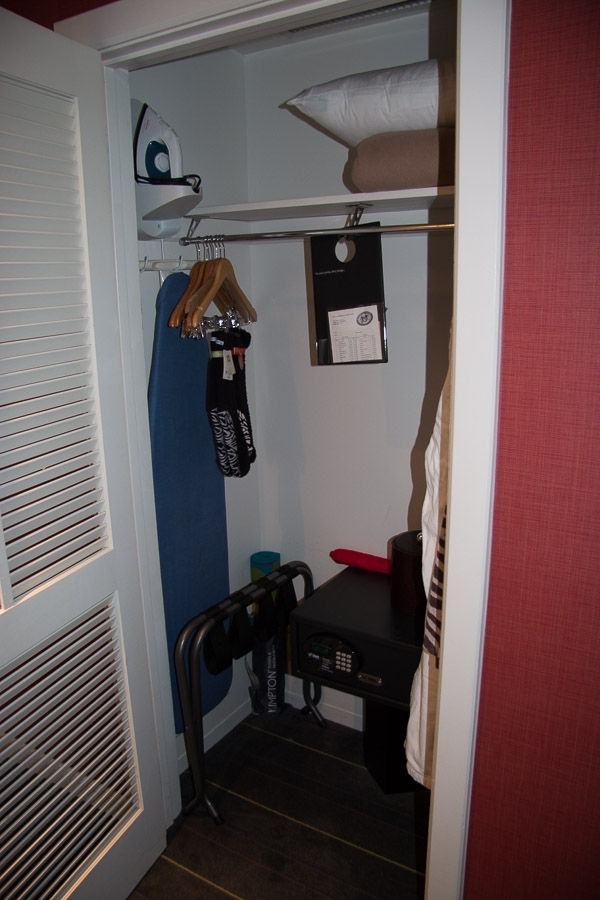 And a great idea for Seattle, there was an umbrella provided, as well as a yoga mat in the closet. 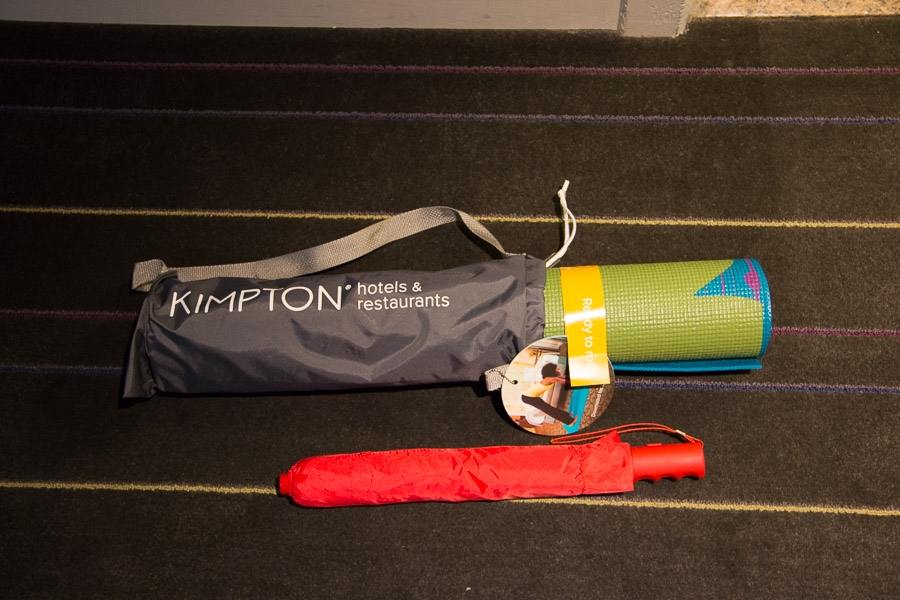 On the coffee table in front of the sofa was a tray of goodies waiting for me, including some water, popcorn (under the metal cover), cheese and crackers, and even a complimentary bottle of wine! 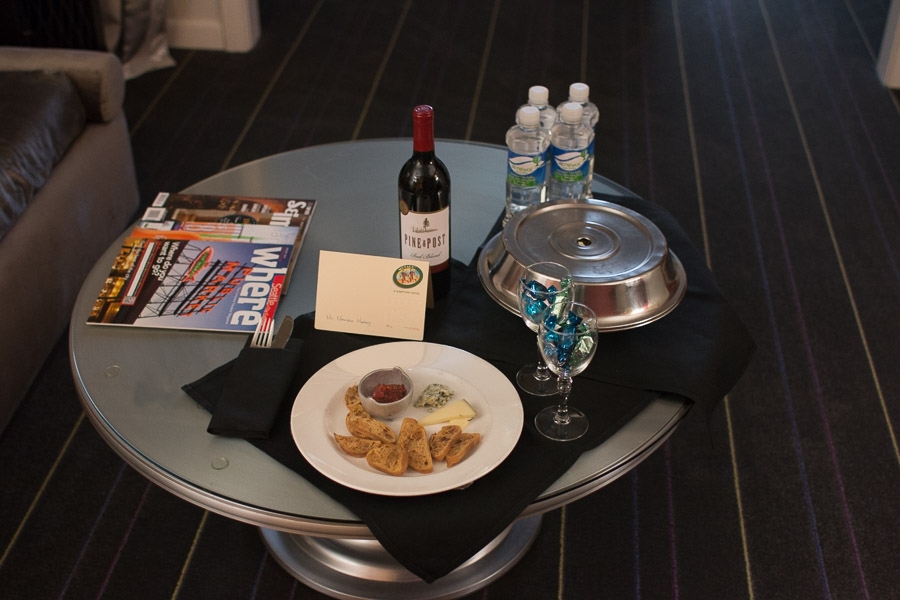 There was also a handwritten note welcoming me to the Hotel Monaco. 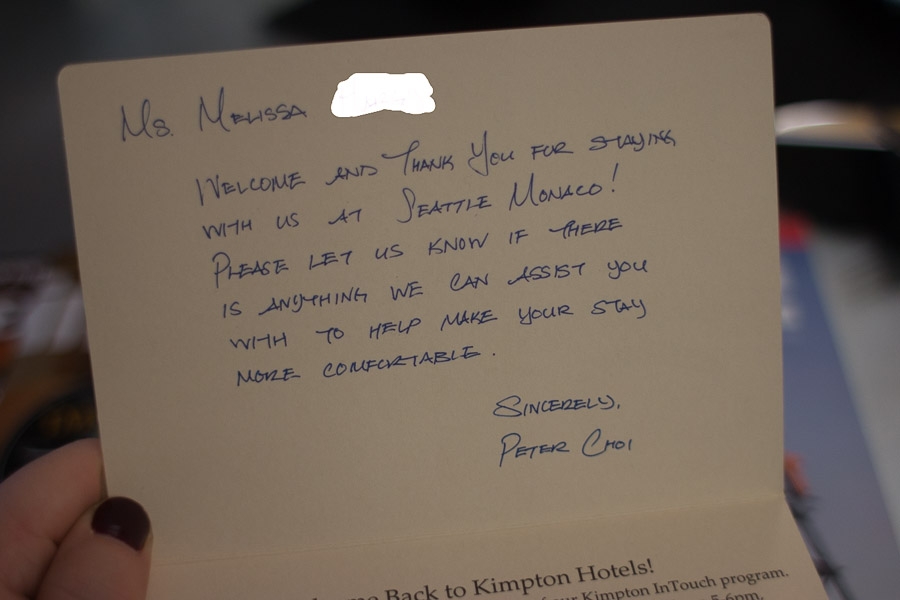 I really enjoyed my stay.  It is always so nice to have a larger room when traveling for work.  I always find small rooms so depressing.  I had room service twice, and I was very impressed with the food.  Also, the location really could not be beat.  It was several blocks to Seattle’s waterfront (although the walk back from the waterfront was entirely UP very steep hills), and there were plenty of restaurants and public transportation options nearby.  I could hear a lot of street noise, even on a high floor, but that is pretty much the case with any urban hotel. 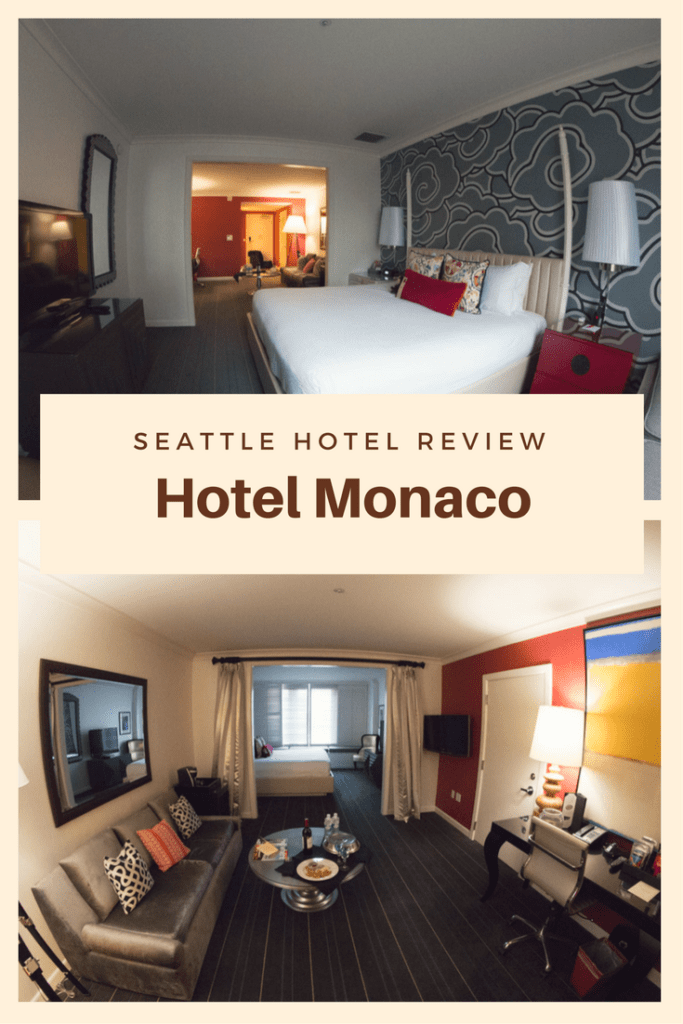 […] at the Angler’s Hotel in Miami Beach.  The Angler’s is a Kimpton property, and I LOVED the Kimpton I stayed at in Seattle last year.  I booked a “Tower Duplex Terrace King” for $314 per night (Originally […]