Europe 2010 – Spain and Mediterranean Cruise – Introduction (Blast from the Past)

I’m starting a new Blast from the Past series today! This will cover our two week trip to Europe in 2010. It all started out as a phone call from my sister that she had found a great deal on a Mediterranean Cruise out of Barcelona. From Barcelona, the ship would make stops in Nice, France, and then on to Portofino, Florence, Rome, and Pompeii in Italy.

It didn’t take much convincing for us to get on board (no pun intended) with the idea! We actually booked the cruise pretty fast to take advantage of the deal. Then it was time to figure out the rest of the details. Neither one of us had ever been to Spain before, so I thought it would be great to spend a week or so traveling around Spain before departing on our cruise from Barcelona. Ken and I ultimately booked tickets to Madrid, (paid tickets unfortunately! This was before I knew how to really play the points and miles game!), then booked an organized tour that took us to Cordoba, Sevilla, Granada, Toledo, and then back to Madrid. From Madrid we were on our own again, and then took a high speed Renfe Train from Madrid to Barcelona. In Barcelona, we met up with my sister and her family and we spent a few days there before departing on our cruise.

Despite a labor strike that disrupted some of our travels for a day in Spain, it was a fantastic trip filled with stories that we tell to this day. You might have already heard the few crazy ones. Like when Ken fell down the steps and REALLY hurt his ankle. And of course, unbeknownst to me, Ken was carrying an engagement ring in his camera bag for the first 10 days of our trip before he proposed in Nice!

Although we didn’t get to spend nearly enough time in Madrid because of the way the rest of our itinerary worked out, what we saw was fantastic, and I unfortunately learned that I didn’t really understand what bullfighting was all about, and I left that feeling kinda sad.

So, here’s just some introductory information before next week, when I’ll jump into our time in Madrid.

We flew nonstop from Washington Dulles to Madrid on Aer Lingus (an Ireland-based airline. Go figure!) 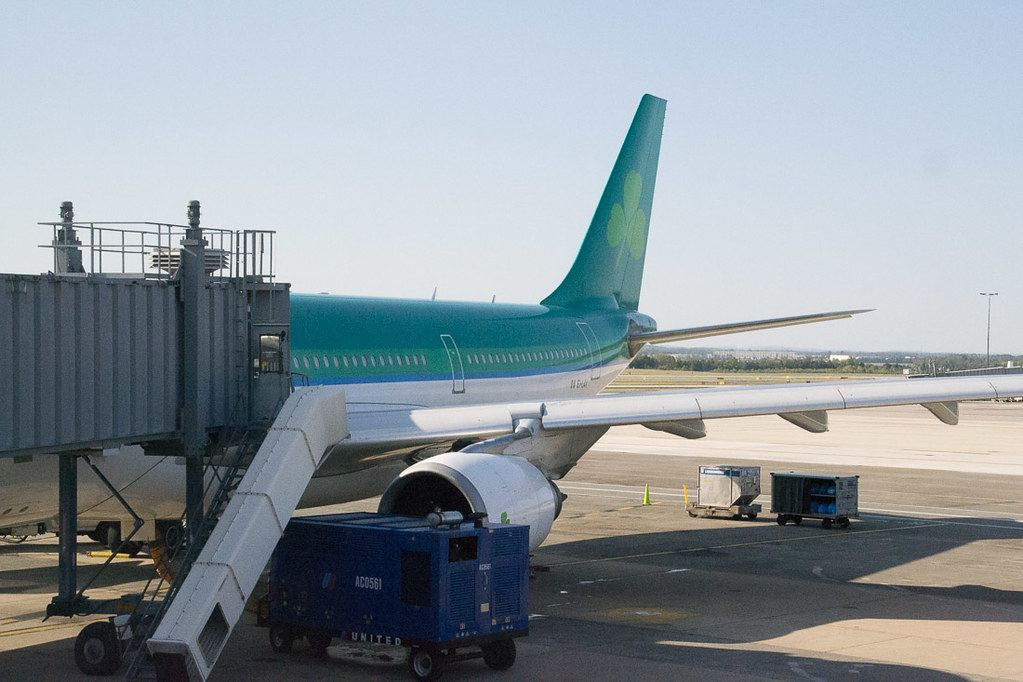 We arrived in Madrid bright and early in the morning and made our way to Madrid’s subway system that was connected to the airport.

Here I am, looking a little worse for the wear after a long flight in a coach seat! 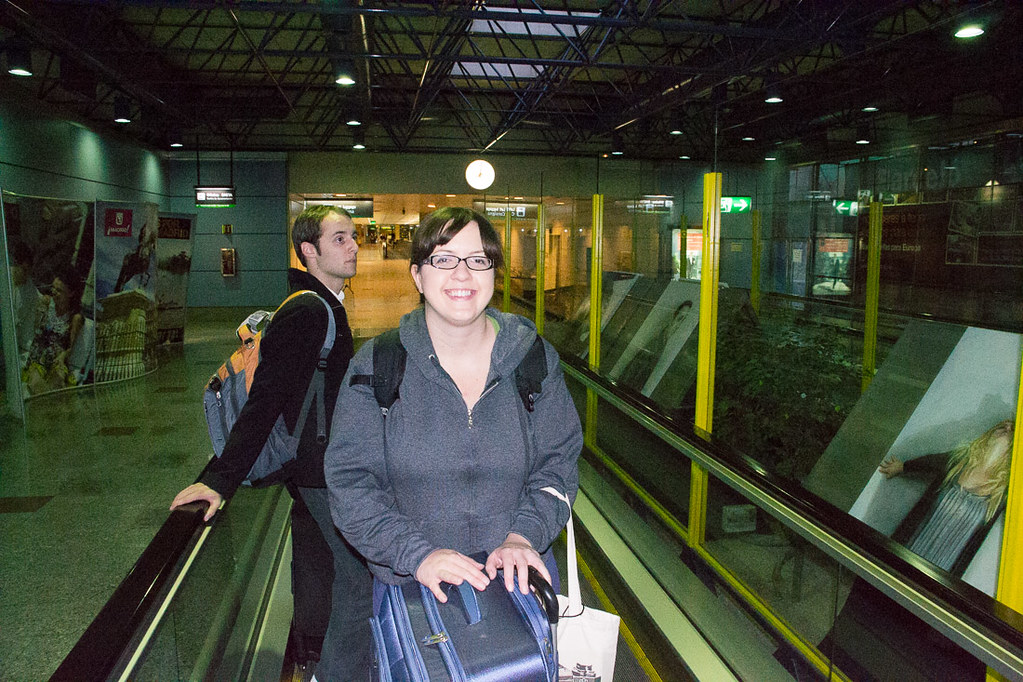 The subway system was beautiful and really easy to use. 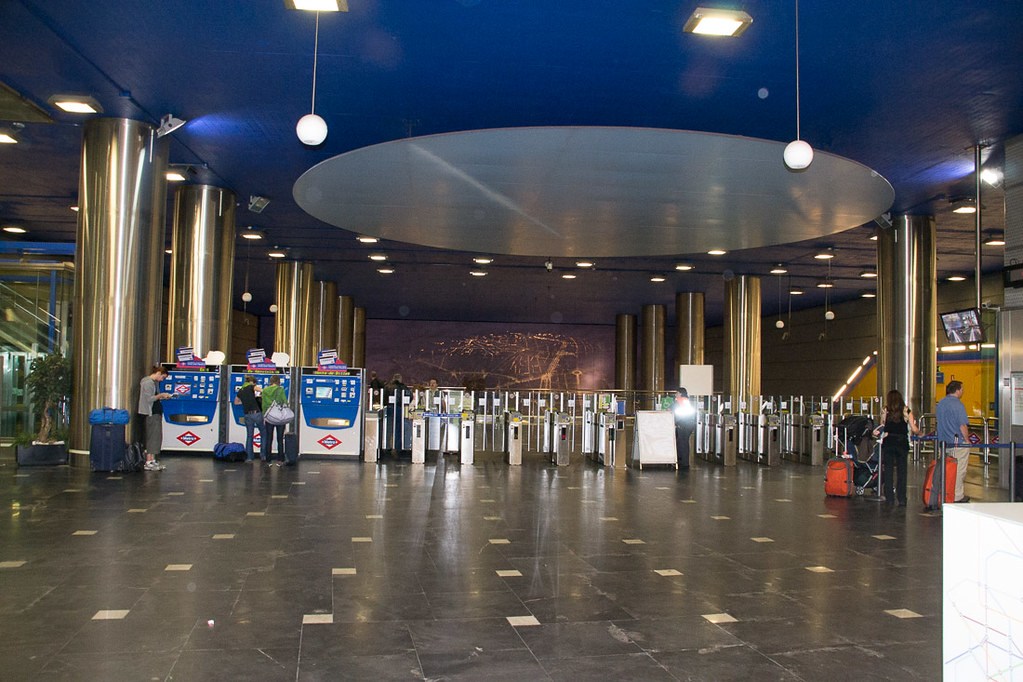 Unfortunately, I can’t figure out how I forget EVERY DAMN TIME that many of Europe’s subway systems don’t have escalators or elevators. Although we were careful not to overpack, it was still pretty annoying that we had to drag our suitcases up several flights of steps, especially because we were so tired and cranky from the long flight.

When we got to the stop for our hotel, there were multiple subway exits to take, and unfortunately we couldn’t find the hotel. Like at all. We were walking around aimlessly with our luggage, Ken had out his handheld GPS, and we both had out our iPhones trying to figure out where the heck to walk (this was before the iPhones had better navigation and walking directions).

Pretty embarrasedly, we ended up hailing a taxi and taking it the, oh, quarter mile to our hotel. Whatever. We were tired!

I should point out that it was this incident that was the sort of final straw of my days of traveling “like a student.”  No more would I try to figure out a subway system in a new city after a long flight while dragging a suitcase to a hotel I wasn’t even sure how to get to.  From that point on, it was taxis, always, from the airport to hotels.  There’s plenty of time to figure out the subway system when I’m more rested!  And since then, that’s what Ken and I have done for every subsequent travel.  Taxi or arranging a ride with a hotel/airport transfer service.  It is so much more relaxing.

We got to the hotel, and since it was still well before check-in time, they didn’t have a room available yet. We were prepared for that. But I went to the lobby restroom where I washed my face, changed my clothes, and freshened up my makeup. Ken also changed his clothes, and then we just relaxed for a while on the lobby sofas. We both felt a lot more refreshed, and we checked our luggage at the hotel and headed out for some Madrid sightseeing!

I’ll start to cover Madrid in the next post!

Why does Highmark Security Blue Make Medical Decisions instead of Doctors?