After all of the craziness of our afternoon that we talked about in our Sochi Accommodation story, it was time to go to the Women’s Halfpipe Event!

The tickets we had were actually for an eight hour duration, 2:00PM–10:00PM. But you can go late, which is just what we decided to do. Because watching snowboarding is fun and all, but eight hours of it would’ve been a bit much!

Our ship was located near the Olympic Village Train Station, so we had to travel one stop to get to Olympic Park, where the venues and main transportation hub was. 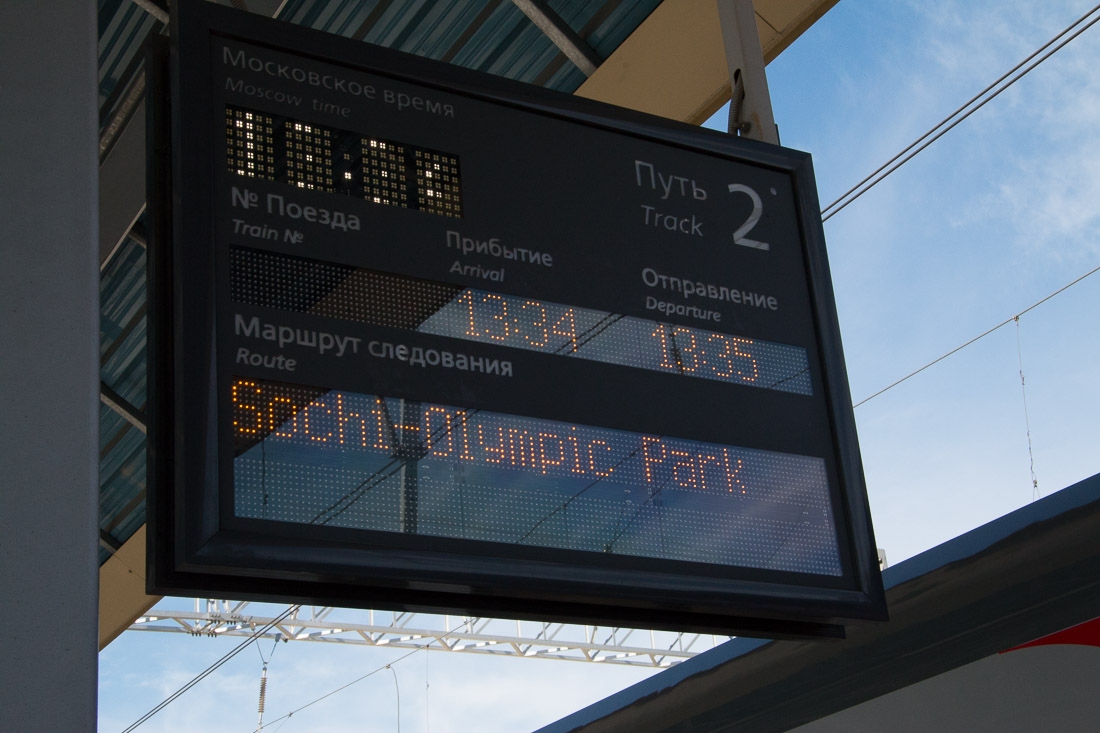 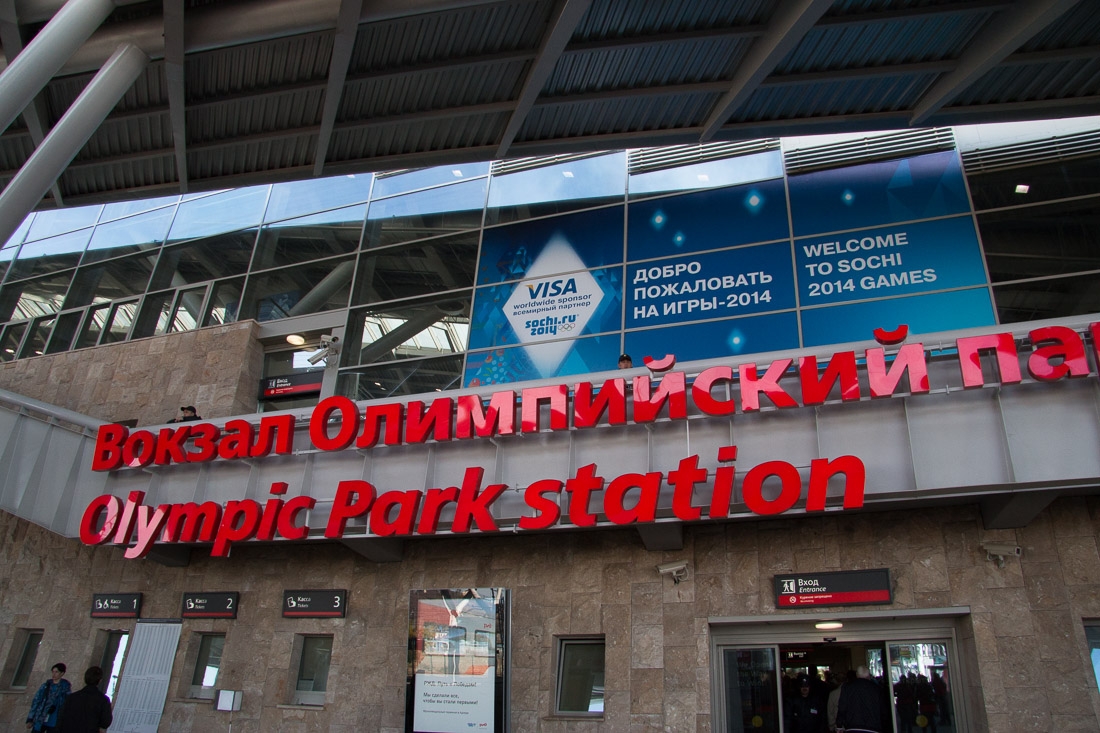 You weren’t allowed to take any liquids through security. But these vending machines were inside of security, so we stopped by the vending machine to take some drinks with us to the snowboarding event. 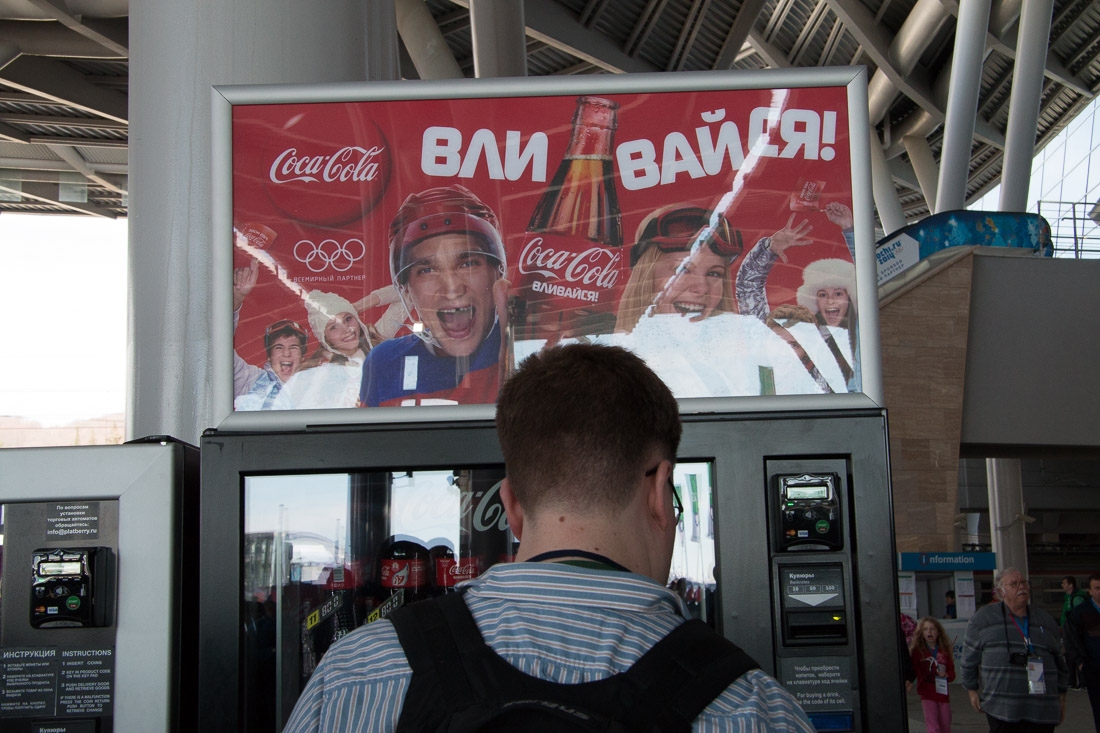 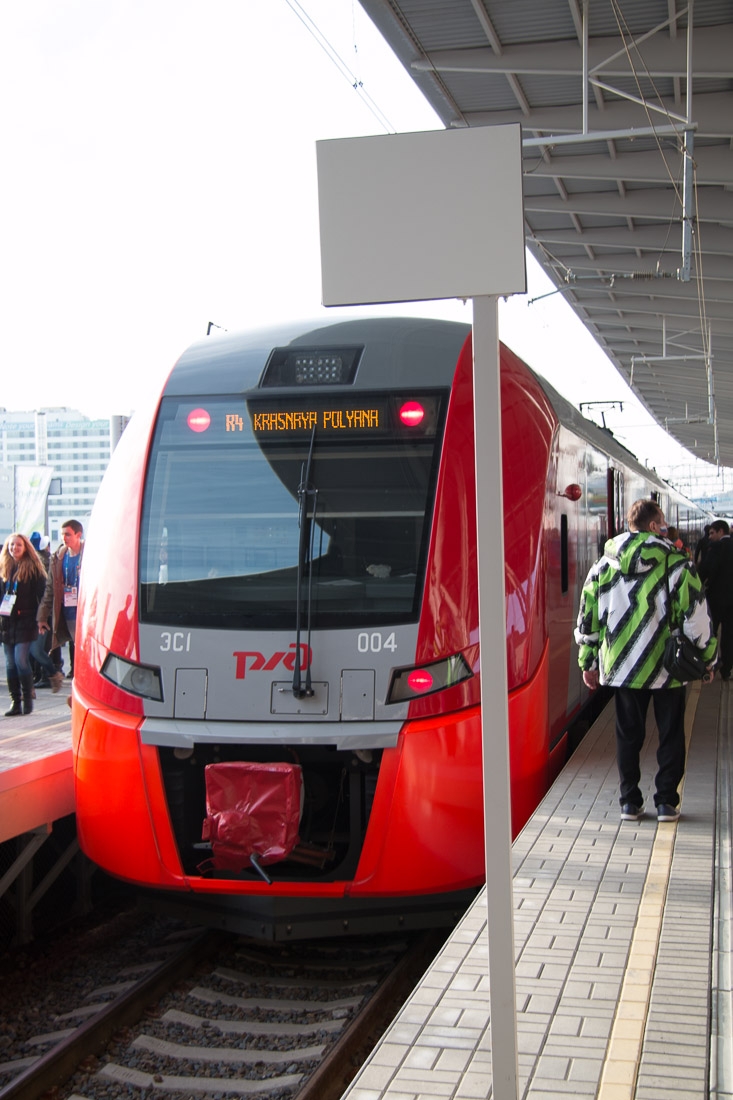 Once we arrived at Krasnaya Polyana, we had to take a bus to the snowboarding venue. 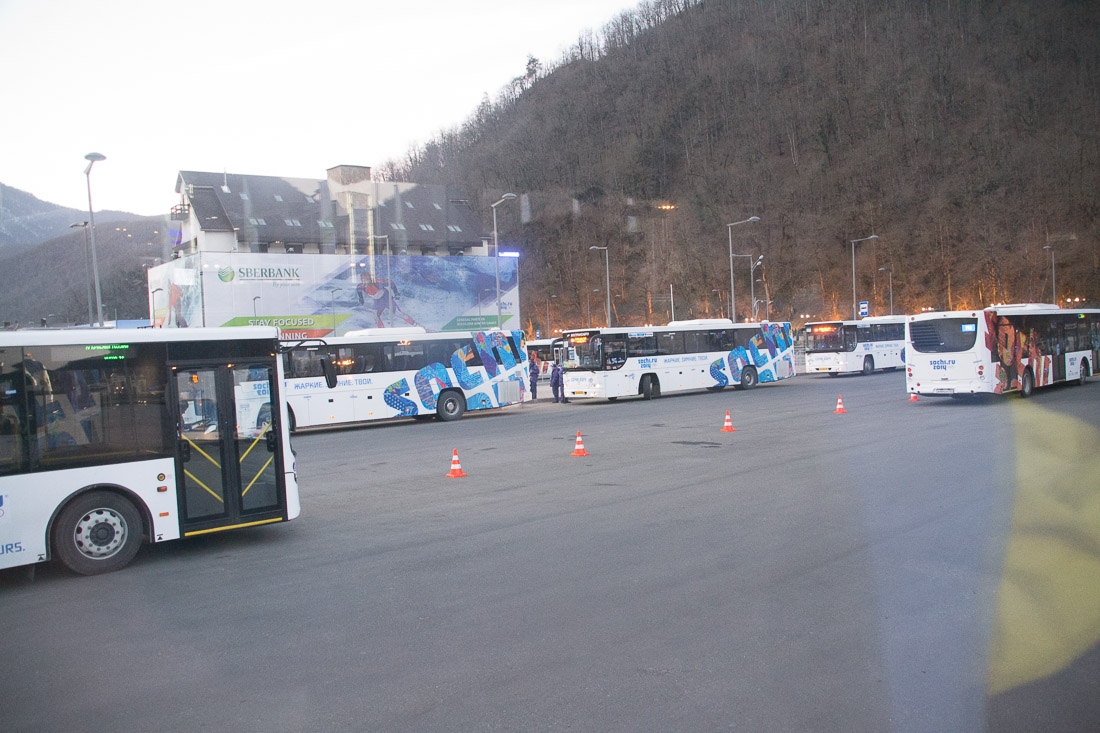 The sky was gorgeous on the drive up the mountain. This photo doesn’t capture it well at all, but use your imagination! 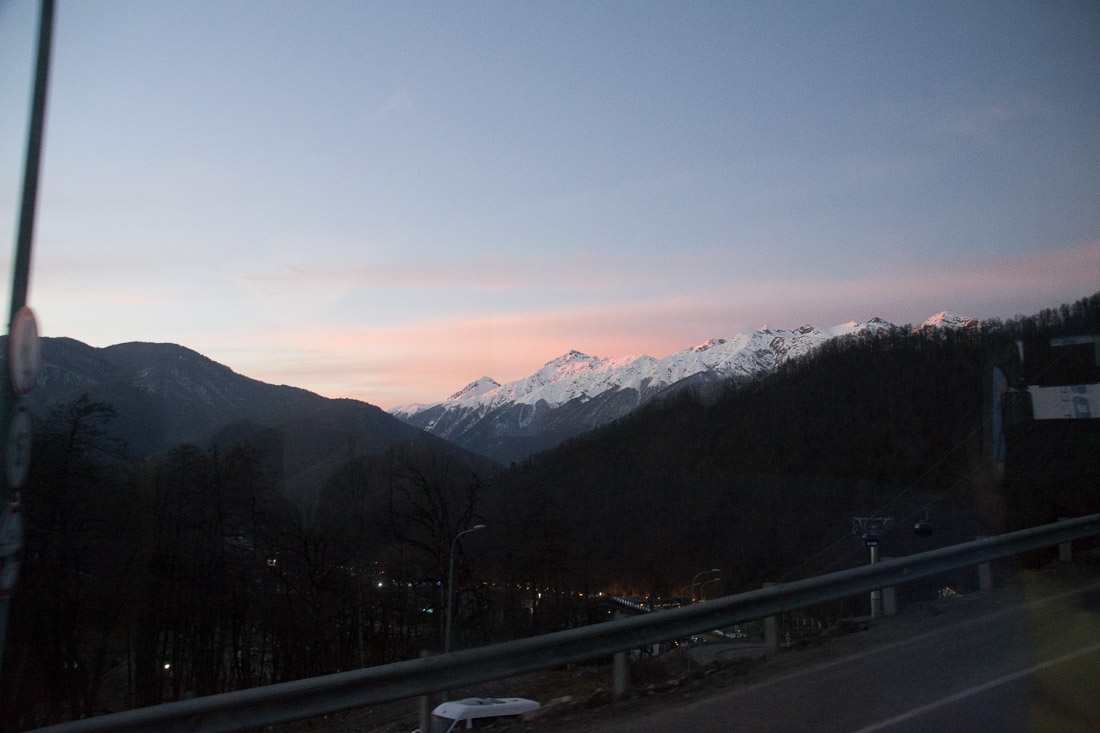 We had “standing room only” tickets for Women’s Halfpipe, but it was still a fantastic view. (The people coming down the halfpipe are “smoothing” out the pipe during a break in the competition.) 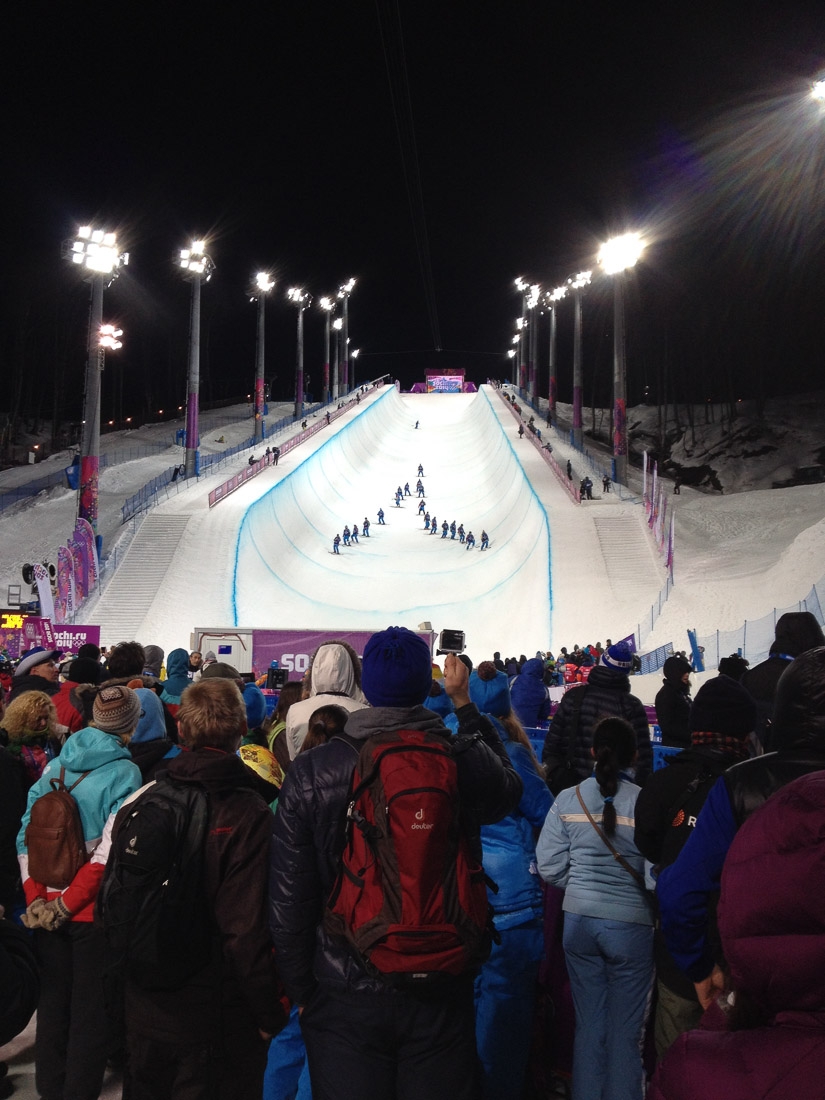 We arrived just in the middle of the semi-finals. We met up with my sister, brother-in-law, and 7-year-old nephew who had been at the event since nearly 3:00PM.

I mentioned in my previous post that my sister had come down with a pretty nasty cold (and presumed ear infection) when she arrived in Sochi. The cold wind was feeling especially rough on her ears, so she and her husband went back to the ship, and my nephew stayed with me and Ken to enjoy the rest of the events.

We loved watching the competition! 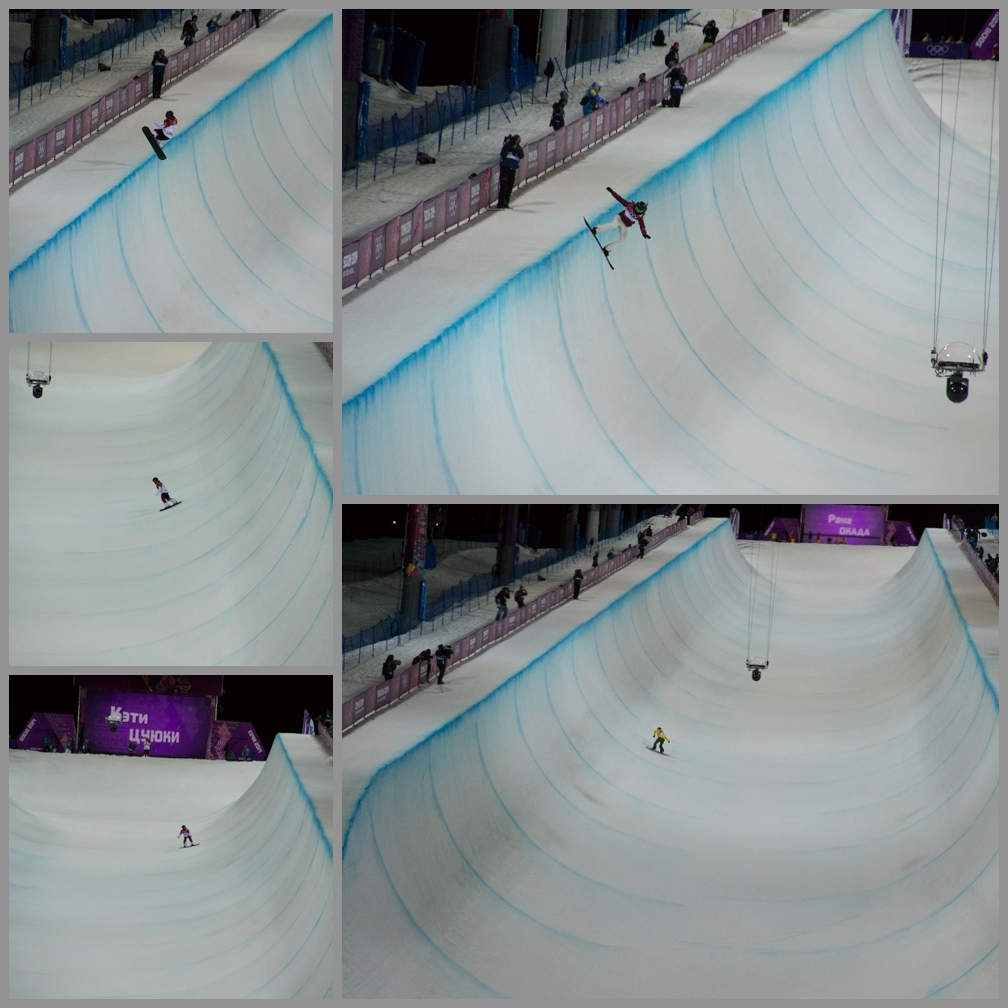 At some point, a woman came up to me holding a printed list of countries and their flags. She asked me to point to my flag, so I pointed to the American flag. I wasn’t sure why she wanted to know, then she took out face paint! I declined, but my nephew was very excited to have his face painted. 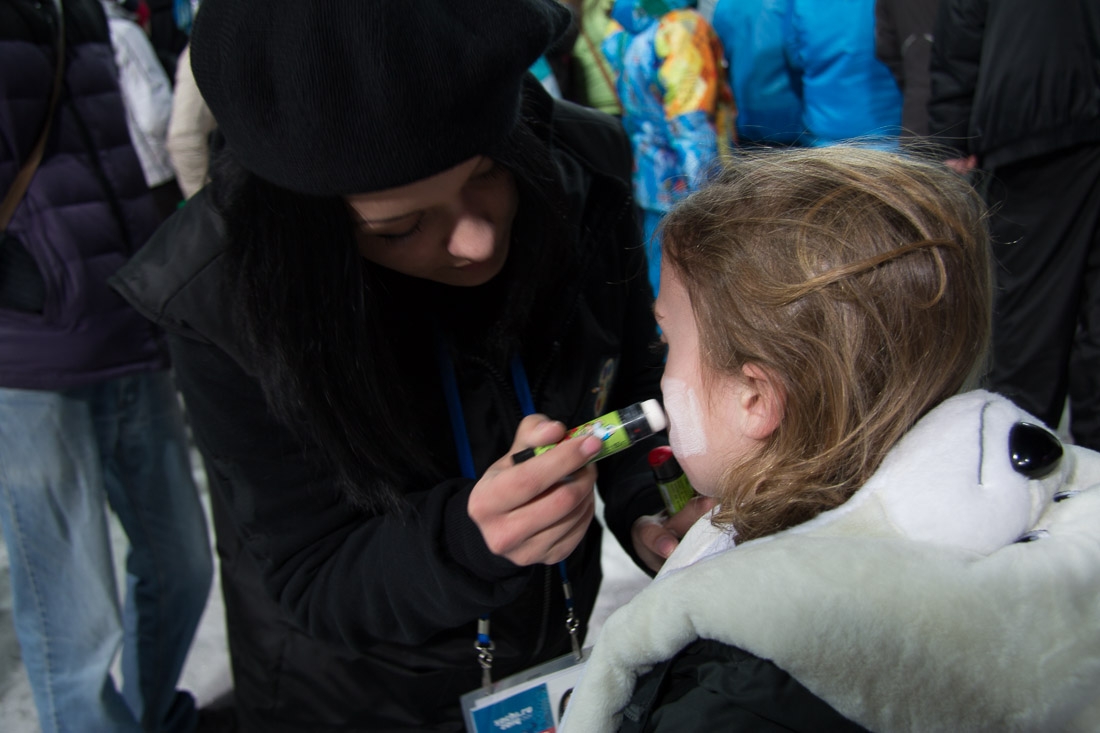 Between the semi-finals and finals, there was about a one hour break, so we headed to the concession stands. One of our few complaints about the Olympic experience was the food. It was so dreadful. 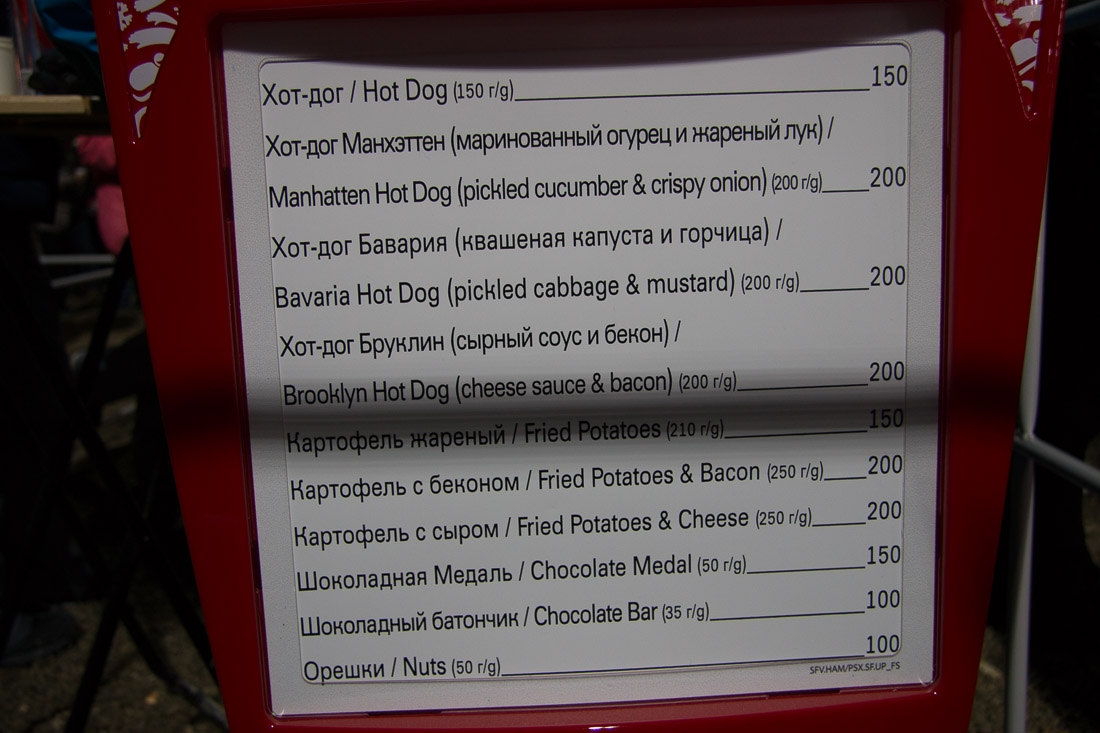 So, before she left, my sister told me that they asked earlier in the day if they could pay to upgrade to the seated area. The bleachers were only about 40% full, but they were told no, that it was a sold out event. So they just left it at that.

So after Ken, my nephew, and I had eaten, we decided to see if we would have any luck upgrading to seats, even though my sister didn’t. So we asked one of the volunteers who was checking tickets, ensuring that people were going to the correct areas. We asked her if we could upgrade to a seat.

Her English wasn’t very good, so we used some charades. I brushed my thumb on my forefinger and middle finger a few times, making the signal for money. Then I pointed to the bleacher area and squatted down like I was about to sit.

Then, in a very strong Russian accent, she said, “Yes, you want seat, go seat.” And then proceeded to walk the three of us to the bleachers. We were pretty astounded at our luck! Ken started to sit in the fourth row, and I said maybe we shouldn’t press our luck, so we went and sat in one of the very empty sections just a few rows from the top. 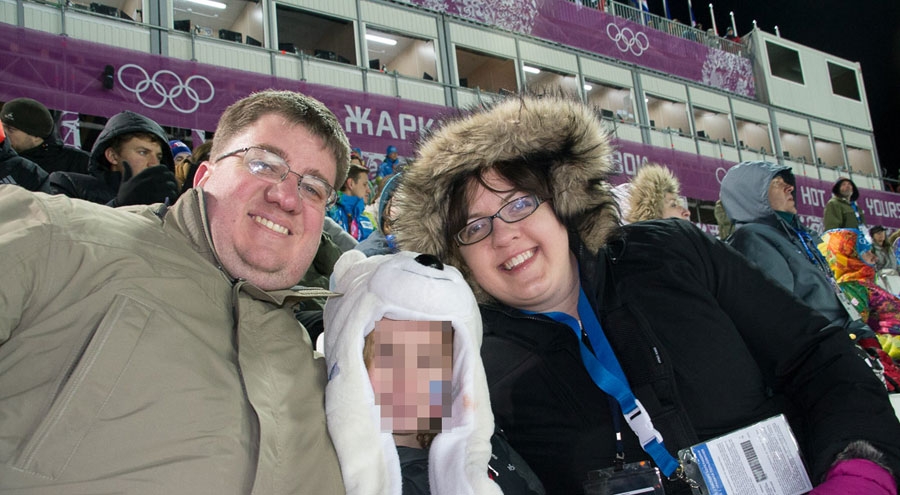 Then we waited for the finals to begin. As the finals approached, the bleachers definitely began to fill up, so we were worried we might have to move, but obviously if we did, it wouldn’t be a big deal since we were upgraded for for free! 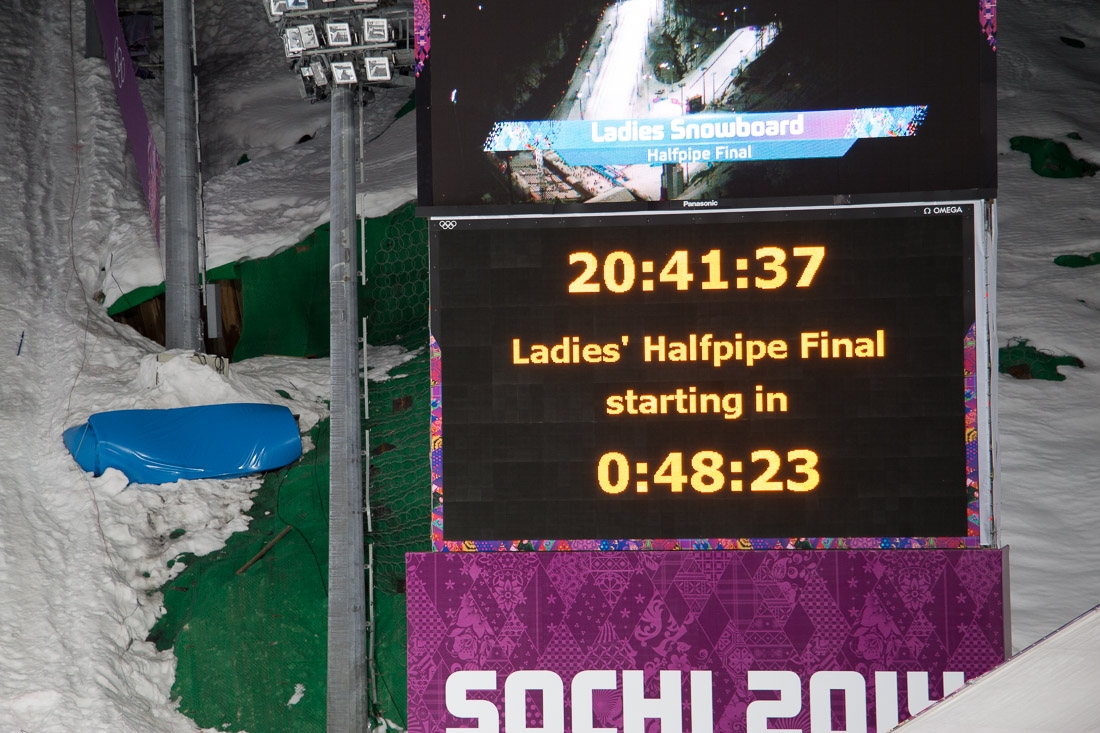 When there were only a few competitors left to compete in the finals, volunteers started setting up the podiums for the “Flower ceremony.” (Medal ceremonies were held at Olympic Park every night starting around 8:15PM.

We witnessed something so amazing! The American women took both the Gold and Bronze! We were so proud of our country’s athletes! 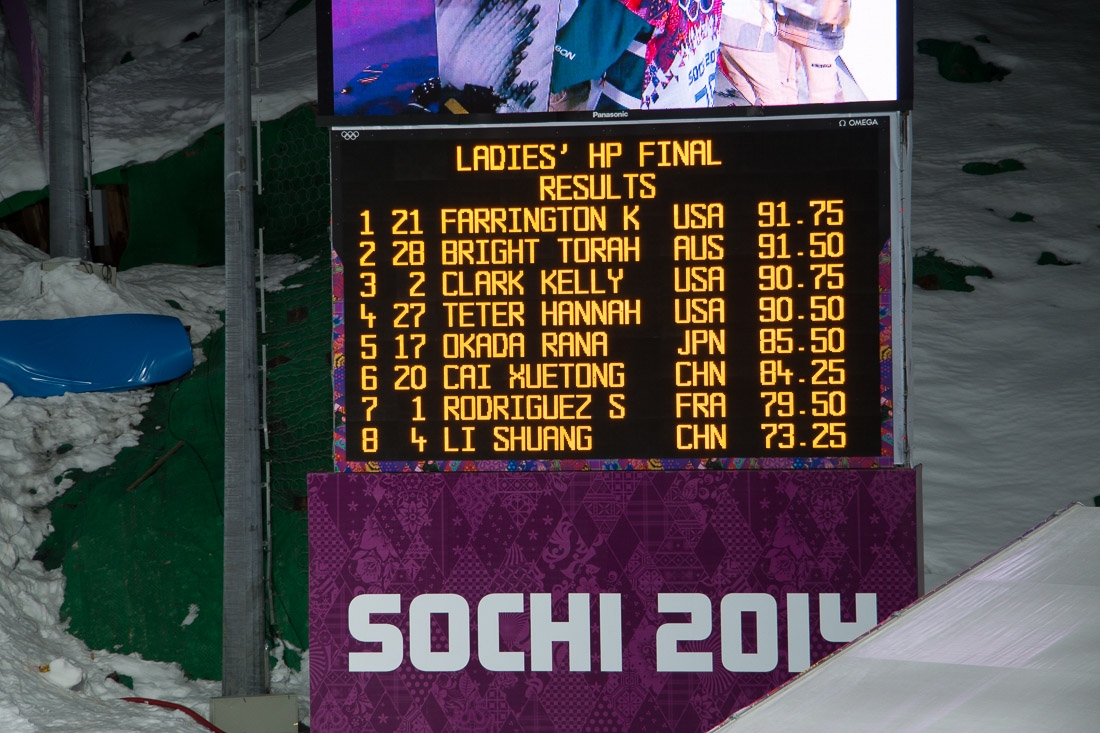 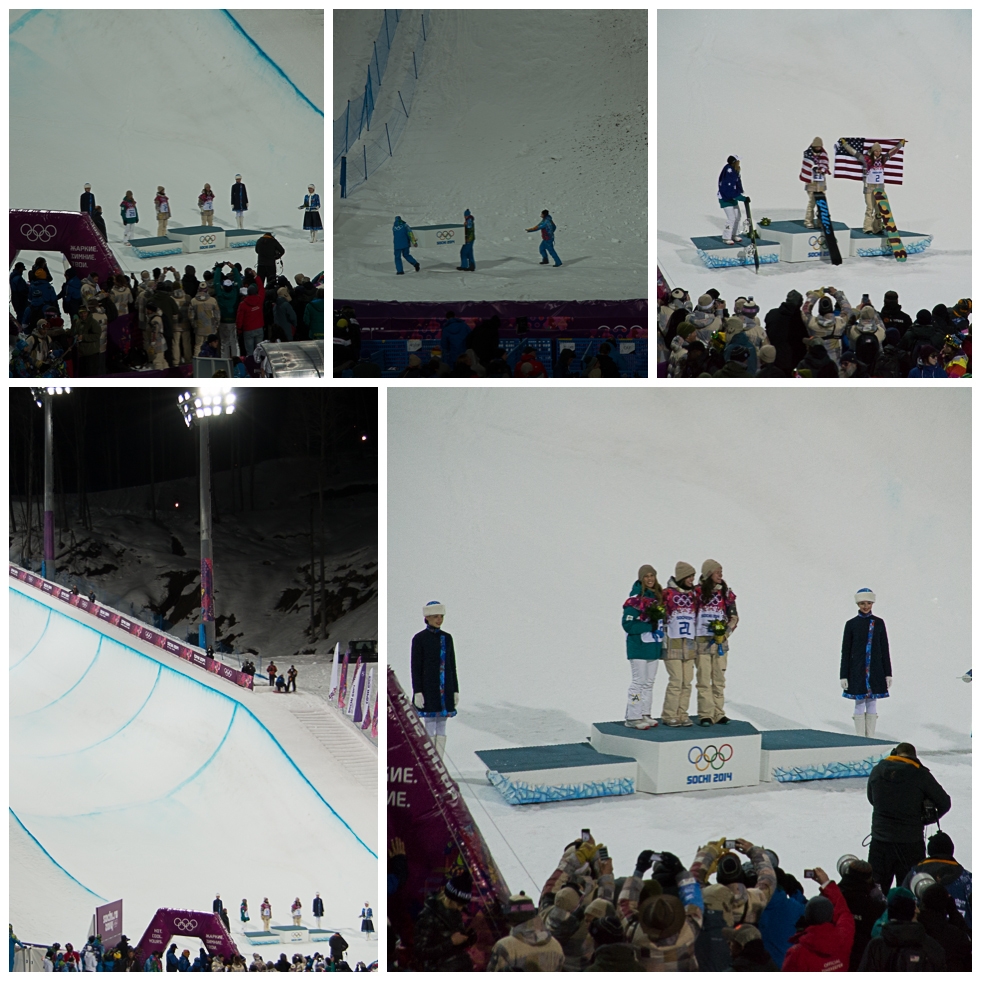 (Side Note: Just wanted to point something out here. Did you realize that some of these venues are so close to one another? We weren’t sure, but we think the hill right next to the halfpipe was the end of the Slopestyle course. And right next to that was the moguls. Go figure! I had no idea how these venues would be set up!) 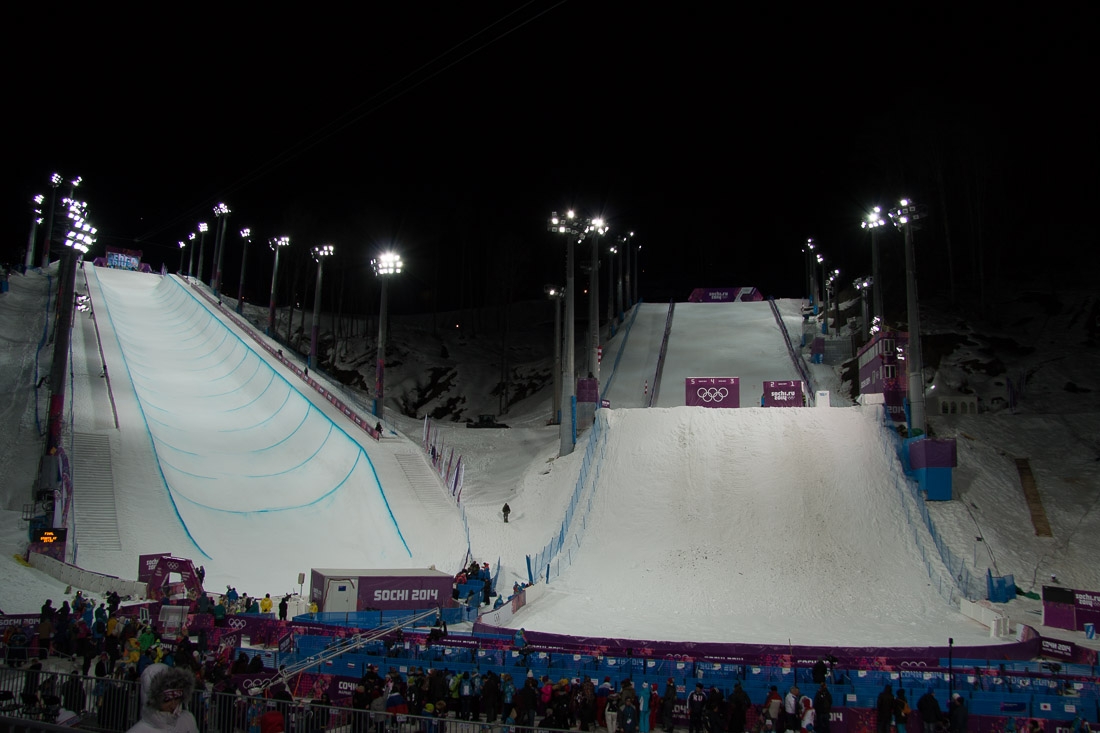 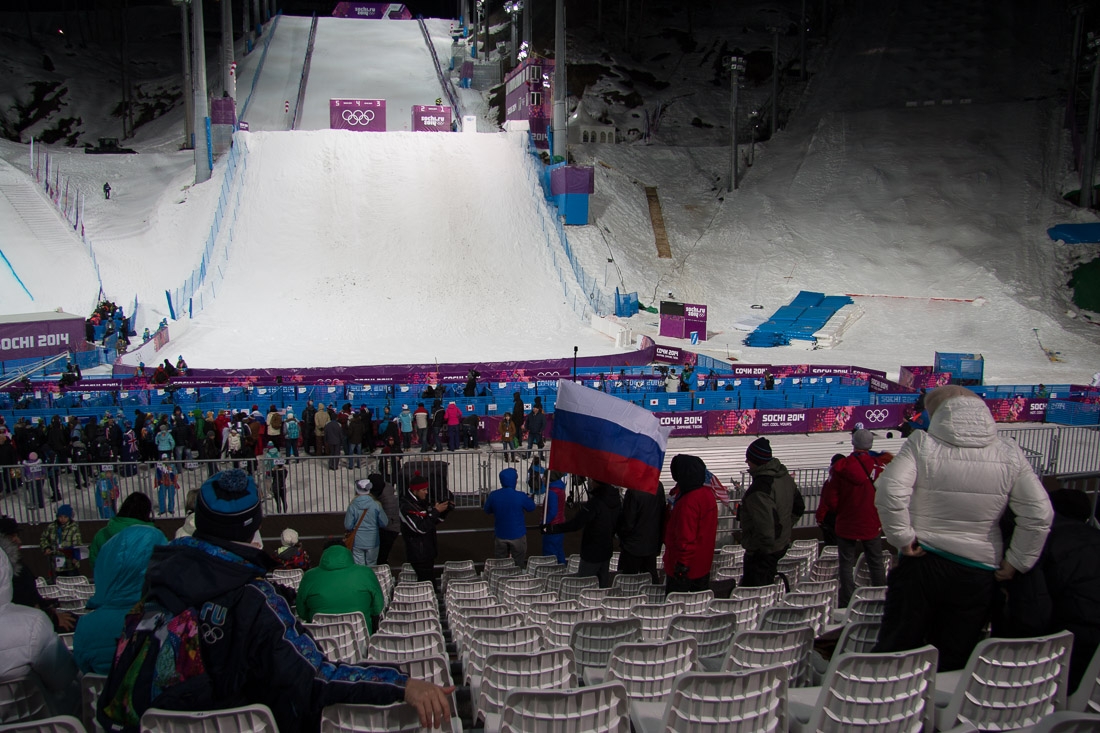 We watched the medal ceremony, and then it was time to leave. We boarded the bus back to Krasnaya Polyana. Since the trains only run once per hour, it was going to be quicker to take a second bus from the Krasnaya Polyana center back to Olympic Park instead of the train.

That bus to Olympic Park was quiet, dark, and nearly empty. It was just me, Ken, and my nephew in the front, and maybe 10 or so Olympic volunteers all seated near the back of the bus. It was nearly midnight, and given that we had basically been traveling for the previous 40 hours on only a few hours of short bursts of sleep, Ken and I were pretty tired on that bus! My nephew fell asleep hard sitting next to Ken.

I was in a row to myself, sitting in an aisle seat. I was dozing off, and as the bus rounded a sharp corner, I nearly fell out of my seat and into the aisle! The armrest wasn’t up on the seat!

Then came one of the stranger moments of the trip. The CB radio on the bus started buzzing, and the bus driver answered it. There were some Russian words exchanged. Then the bus driver pulled over to the side of the road, stood up, and started walking down the bus aisle, looking in all the seats and under the seats.

Given all the fear mongering about potential terrorist attacks during the Sochi Olympics, my brain jumped to some horrific conclusion that there had been a bomb threat or something. After looking for a few minutes, the bus driver went back up to the driver’s seat and started driving again.

Then the radio buzzed again. He picked it up, some Russian words were exchanged again, and then he tried to hang up the radio while he was still driving. And couldn’t get it clipped on the spot where it was supposed to go. So he started taking his eyes off the road to put the radio back. And it still wasn’t latching. So then he’d look back at the road, swerving a bit. Then back down at the radio. Ken was about to get up and put it in place for him!

We got back to our ship at nearly 1:00AM. I called my sister to let her know we were back with her son, and that we were all hungry and going up to the ship buffet (which luckily operated every day until 2:00AM). We all had a bit of a second wind, including my nephew, who was SUCH a trooper! We had some dinner, I took my nephew back to his cabin, and then Ken and I went to our cabin. We both crashed asleep fast, and slept until nearly 11AM the next morning!

Creating an Emergency Kit for Home, Work, and Car