So, you guys, I still have a box of Russia trip memorabilia that is just collecting dust. I’ve been on a quest FOREVER for ways to integrate memorabilia into easily displayed / accessible mediums, but I’ve never been able to decide on anything.

For instance, I love the idea of mini-albums (like here and here), but I shudder at the thought of punching holes or using glue on my memorabilia. I also like the idea of displaying memorabilia in jars or boxes, but I kind of wanted something that would be easier for houseguests to “leaf through.” You know, because I’m sure that’s what all our houseguests would want to do … spend time looking at our old ticket stubs (end sarcasm). But, you get the idea! Indecisiveness. Analysis Paralysis. Whatever first world problem you want to call it.

Anyway, even if I can’t decide on a method of displaying memorabilia, one thing I decided on several years ago was a way of displaying my foreign coins. (And, I do feel pretty proud that I had this idea before Pinterest was around). I’ll be making room for my Russian coins soon! 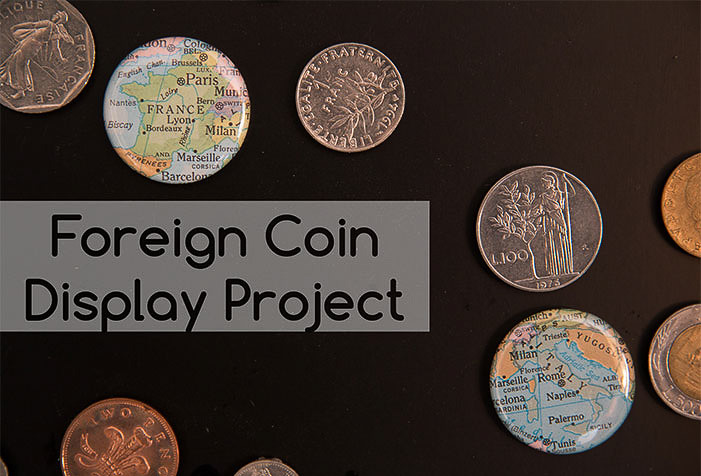 For years, (No, seriously, YEARS! As in more than a decade) I had coins from previous international trips sitting in envelopes in a drawer. Like trips to Europe in the mid 1990’s when each European country still had its own currency and wasn’t on the Euro. I had Greek Drachma, Italian Lira, and French Francs. I also had Japanese Yen, South African Rand, and Brazilian Reals. And lots more. And those beautiful, amazing coins just sat, unappreciated, in a drawer.

So, I set out to make a display of them. Even though it was pre-Pinterest days, a couple of Google search results inspired me to make magnets out of the coins. But I didn’t want to put them on the fridge, I wanted to make some sort of display.

Currently, I have two shadowbox frames displaying the coins. I’ll provide the details and how-to after the pictures. 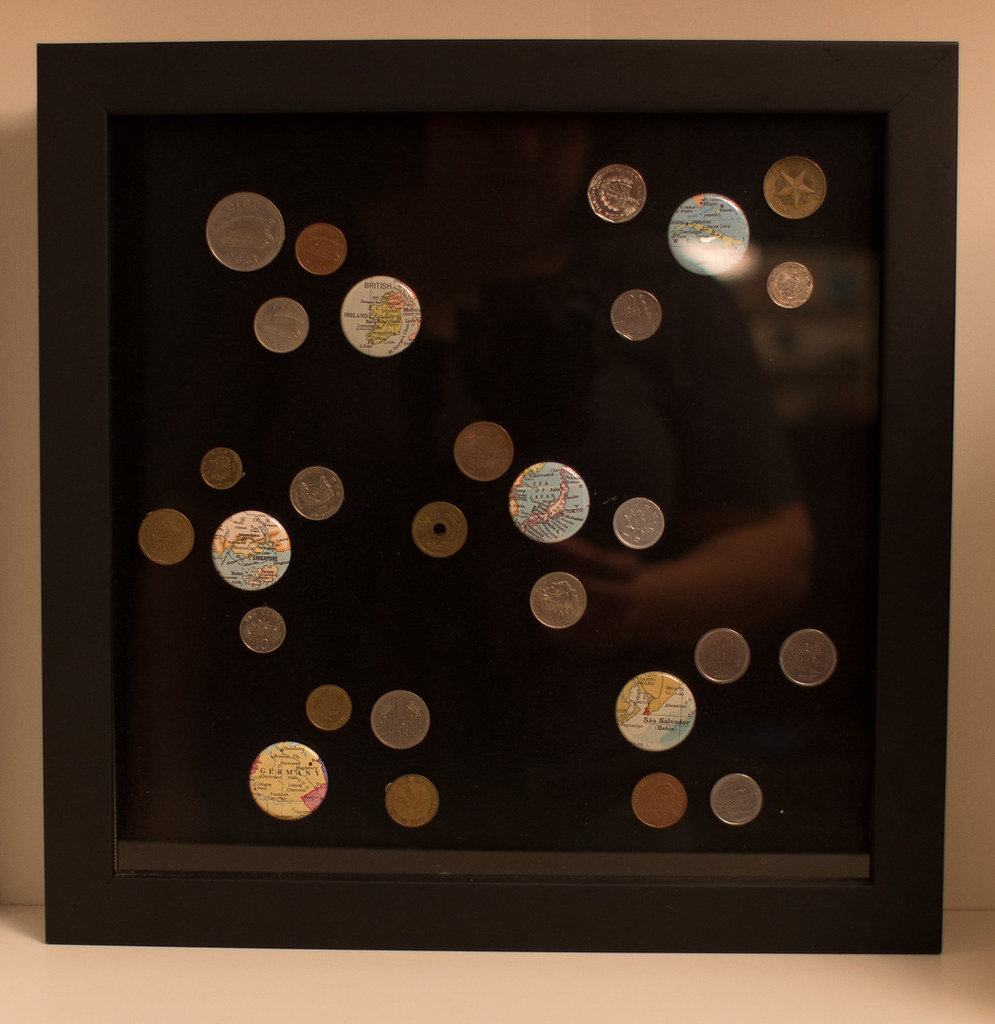 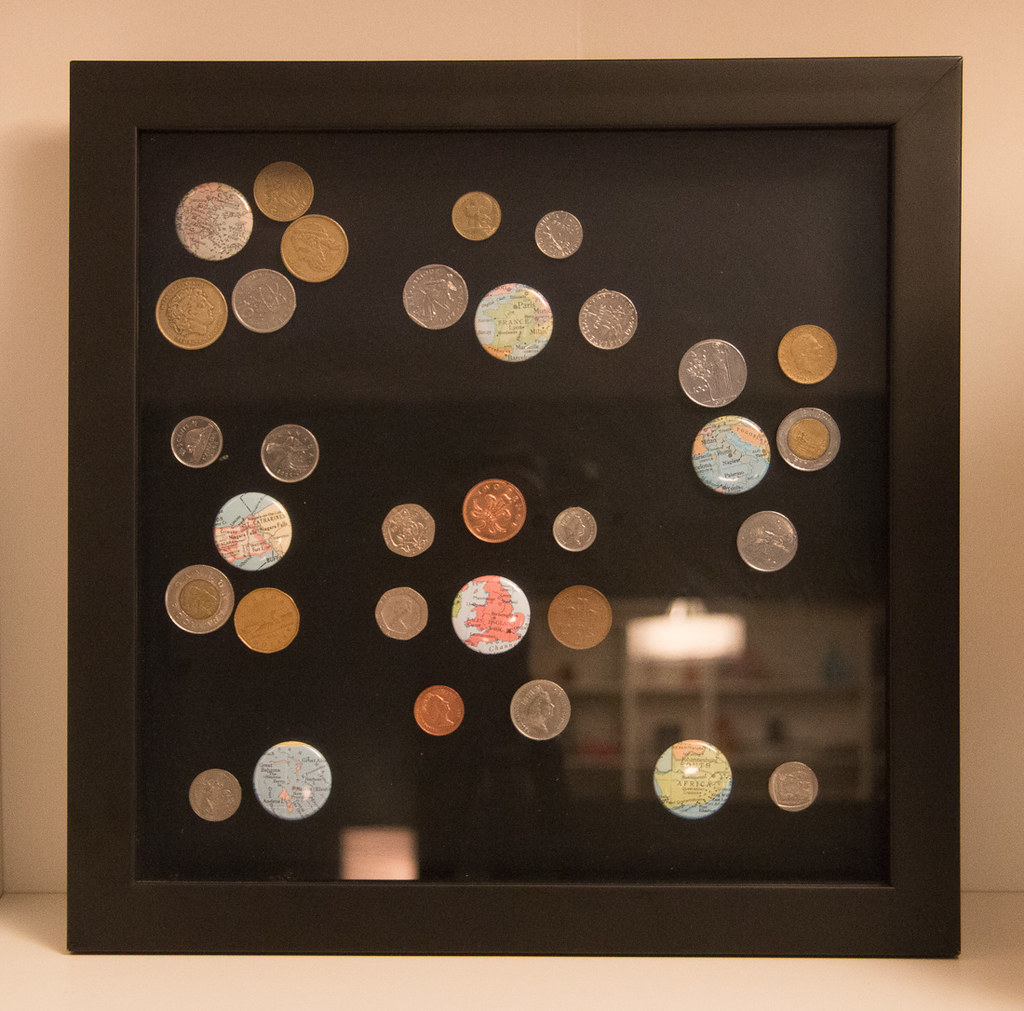 And here is one of the shadowboxes with the front “door” open, in attempt to minimize the glare. 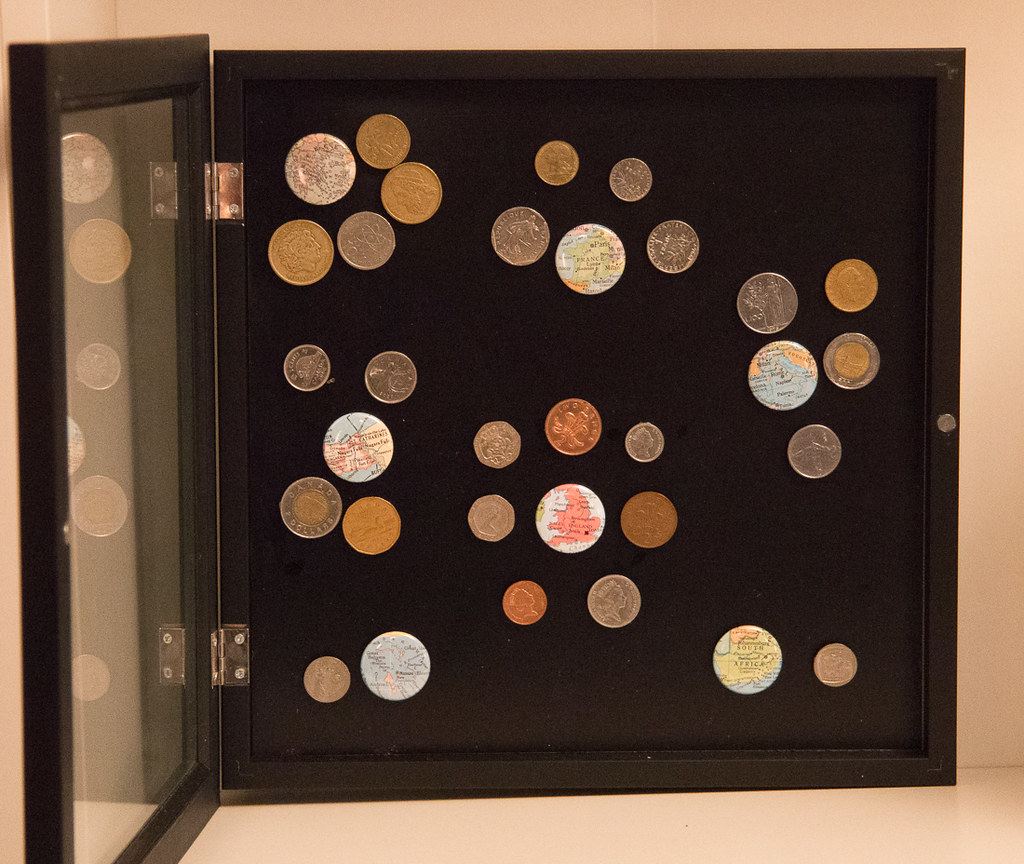 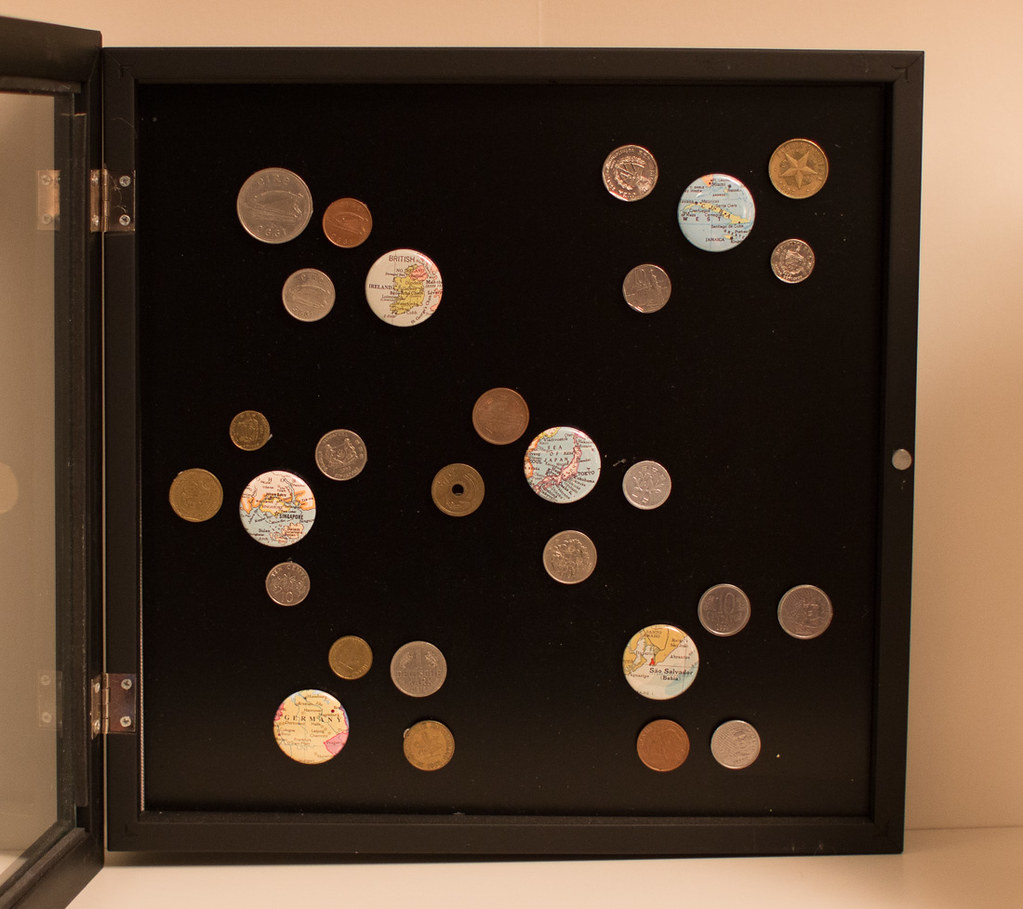 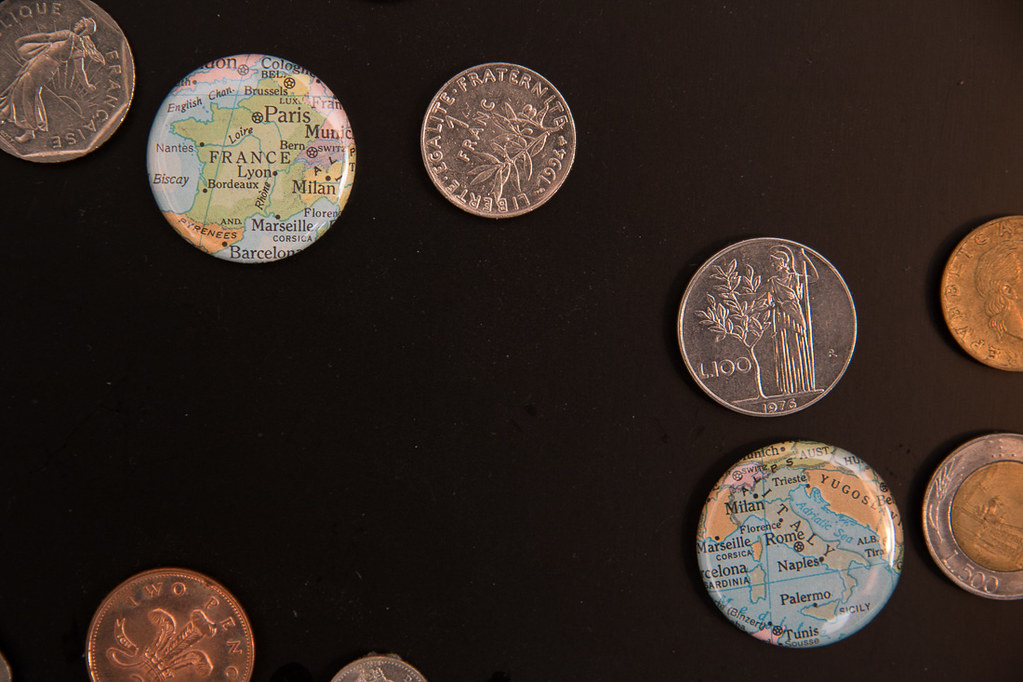 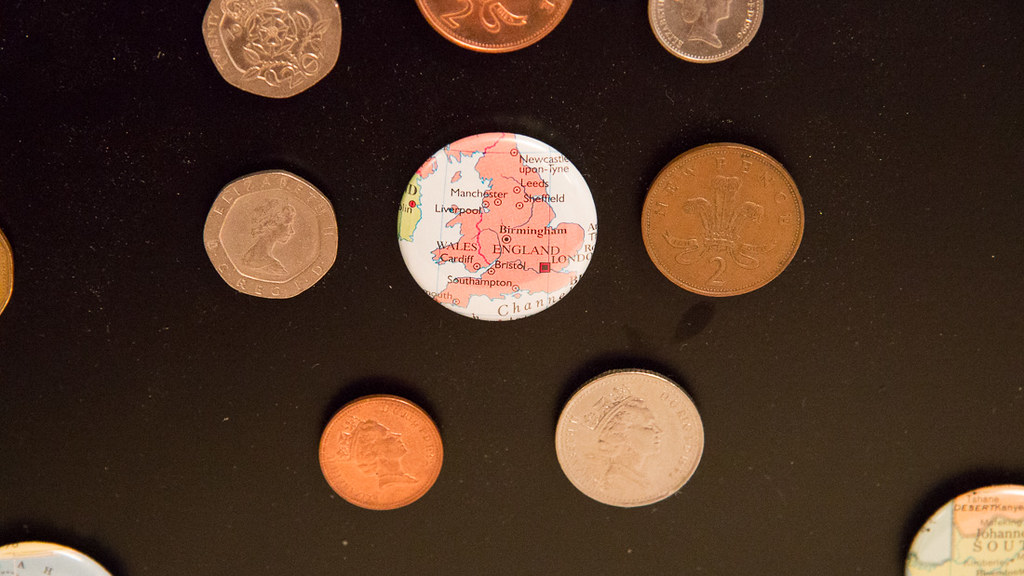 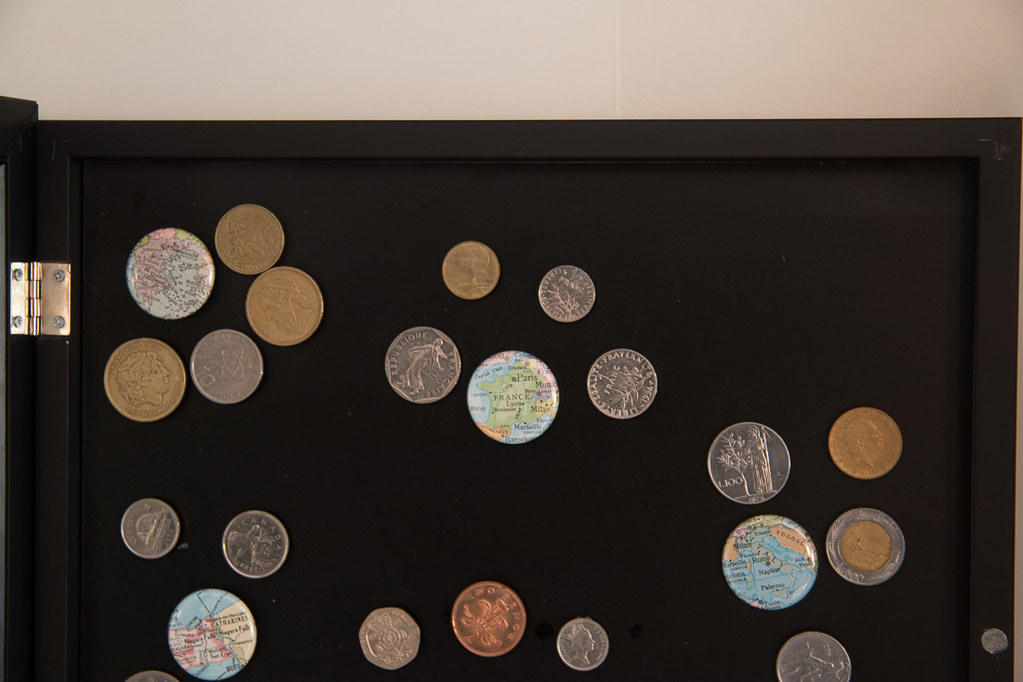 I wanted the maps displayed so that people would be able to tell easily where the coins were from. In many cases, it’s not immediately clear from looking at the coin. In case you’re interested, I ordered the map magnets from XOHandworks on Etsy. (Update October 2018: it looks like XOHandworks is now shut down on Etsy.  Here are some other Etsy sellers that have map magnets:  Tanner Glass and Luv4Sams)

Like I mentioned, this project is from several years ago, so I don’t have any photos detailing the steps I took to complete the project. But, it was very straightforward, so hopefully some text-based instructions will work just fine!

1) I purchased a 12×12 shadowbox from Michael’s. It opened in the front, but that’s not completely necessary. 12×12 shadowboxes are plentiful because that is a pretty standard size for scrapbook paper.

3) I spraypainted the sheet metal using matte black (or it might have been satin black) spraypaint. I used two coats, allowing it to dry completely.

4) Next, it was time to figure out how to make the coins into magnets. Some of the coins are ferrous, meaning that a magnet will stick to them directly. For those coins, I just put a small neodymium magnet on the coin directly. For those coins that were not ferrous, I put a tiny dab of silicone glue on the back of each coin, and then pressed the neodymium magnet into the glob of glue, and allowed it to dry completely.

**Please note that I am not a coin preservation expert! I have no idea what the long term harm might come to your coin if you use silicone glue on it. However, from my rudimentary research, silicone glue was the best option for the coins because it holds well, is non damaging, and can scrape off easily. Considering my coins are not rare, and in many cases I had multiples of each (which still sit in a drawer!), I was not concerned about this method.

5) Finally, I put the sheet metal in the shadowbox, and then started putting the coin magnets and map magnets on the sheet metal, moving them around until I was pleased with the arrangement.

6) Hang on wall or put on shelf! Enjoy your coins now on display!

There you have it! How have you displayed your foreign coins?  (Update: You can also see how I now display my old spoon collection from my previous travels!) 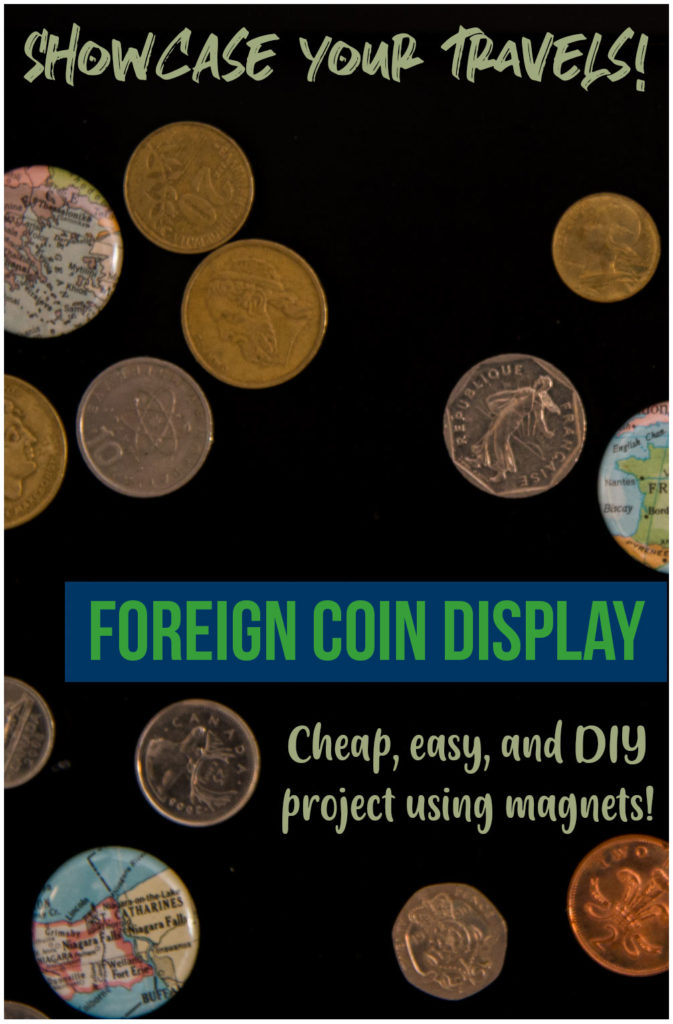 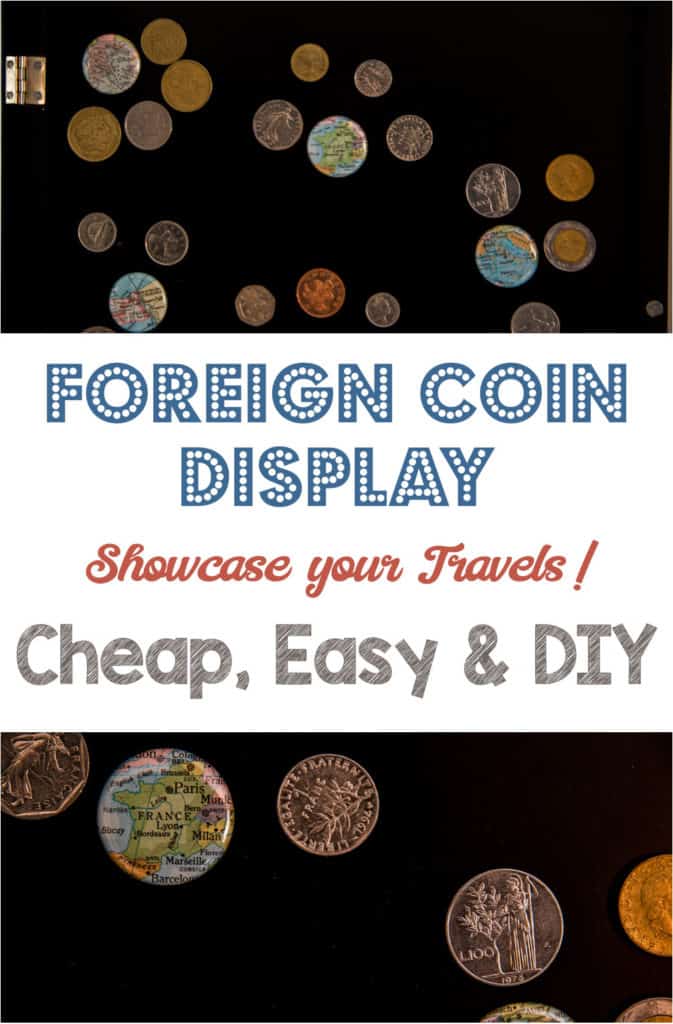 Where we Ate at Disney World

Such a great idea. I like that you included a little map. Mine are on the fridge, but I think this looks more long term. Thanks.