Modern And Easy Method Of Displaying A Spoon Collection

Way back in the day, I used to collect spoons. Yes, spoons.

It all started when I was 11 years old, and my then–21-year-old sister had gone on a trip to Paris. As a souvenir, she brought me back a spoon. And like an 11 year old brat, my reaction was something like, “A SPOON?? WHAT A LAME GIFT! WHAT AM I GOING TO DO WITH A SPOON.”

But, after getting over my initial bratty disappointment, the spoon spawned a collection hobby over the course of 10+ years. Everytime I traveled, whether with my family or by myself, I bought a spoon. Pretty soon, my spoon racks at childhood home were packed to the gills. 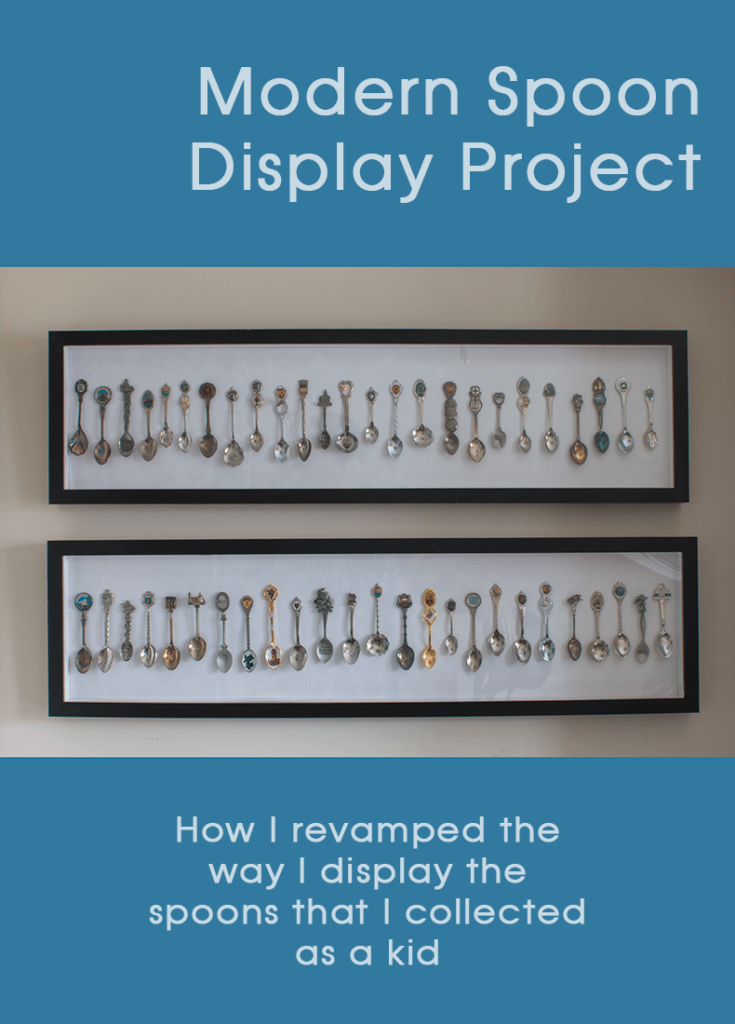 I stopped collecting spoons sometime in the 2002 range. I started traveling to more diverse destinations, and spoons weren’t always available in gift shops. Plus, I learned the value of buying locally made souvenirs, or souvenirs with some cultural meaning. (Although I still like to buy my Christmas ornaments!)

But, that still left all my old spoons. Still sitting in their display racks at my dad’s house. I wanted to keep the spoons. And I liked the idea of displaying them in our house now instead of my dad’s. But I wanted to figure out a more modern way of displaying them. Plus, I thought that the racks always looked too cluttered: 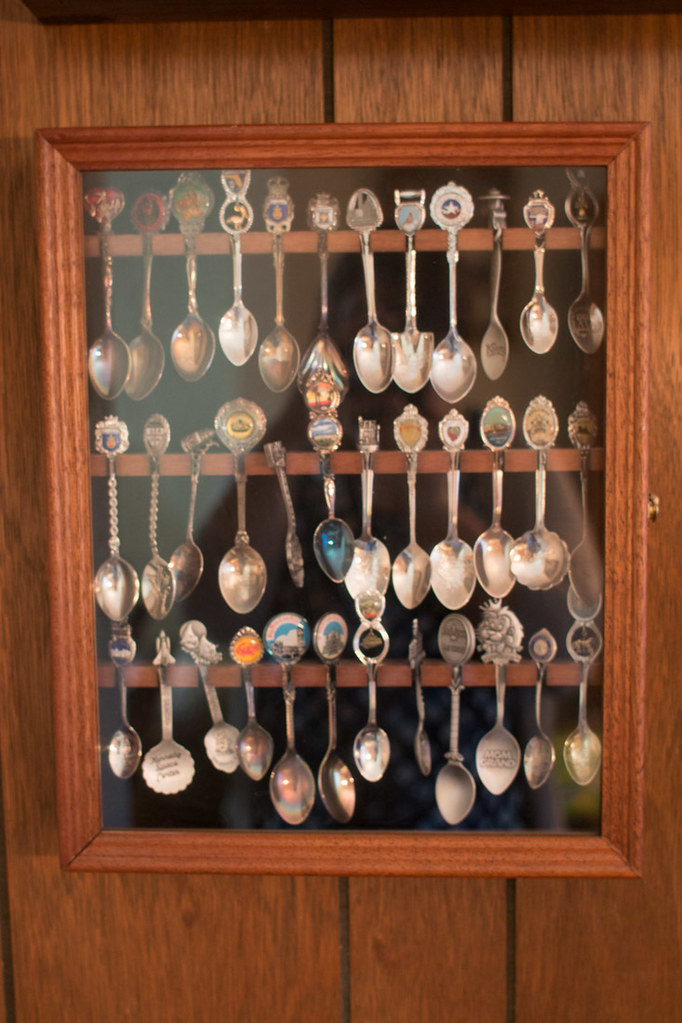 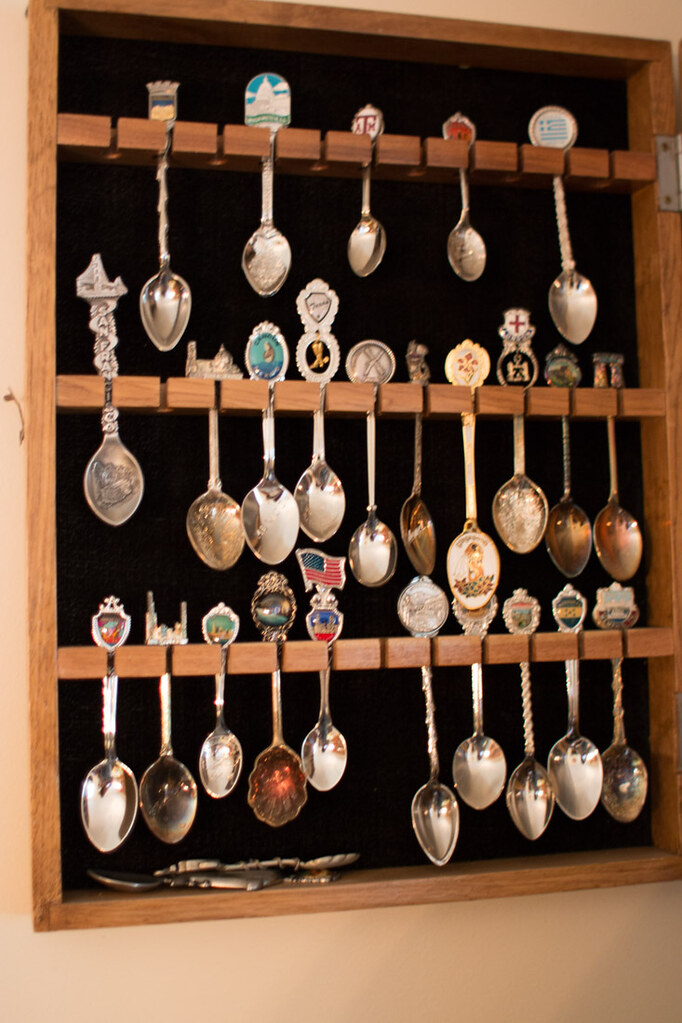 Plus, some of the spoons were too “fat” and couldn’t even fit in the slots. So, they just kinda laid at the bottom of the rack. 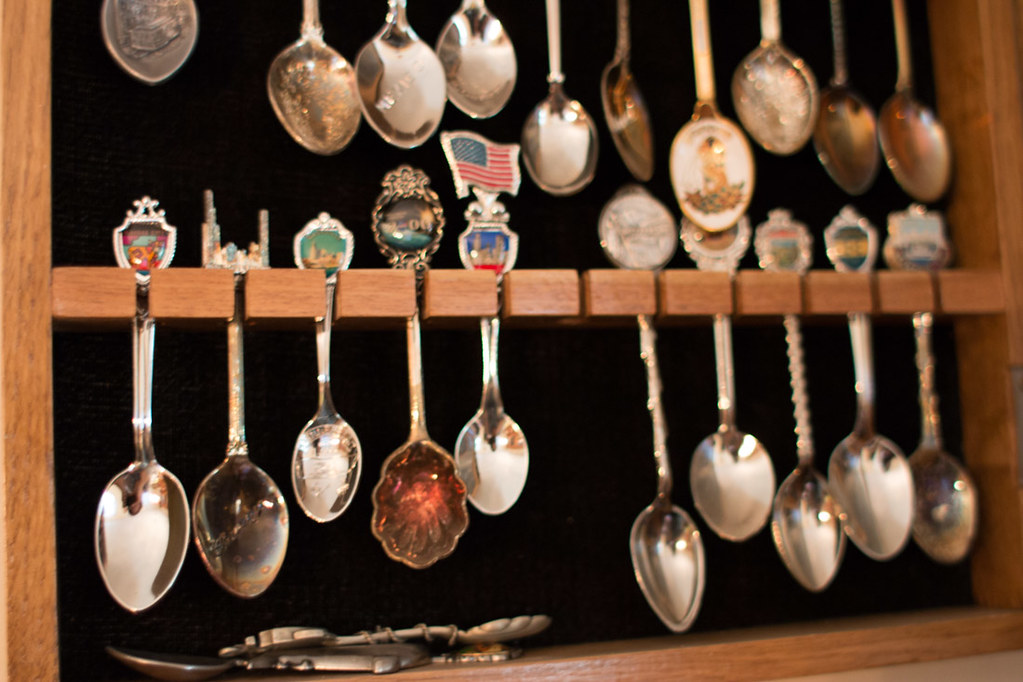 A little old fashioned, no? 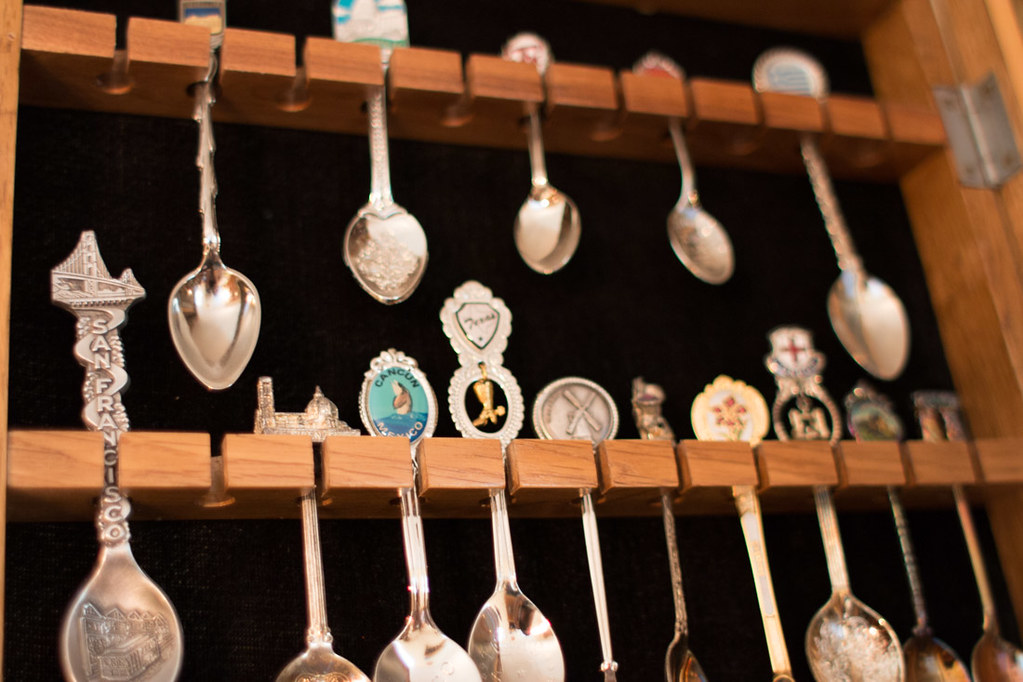 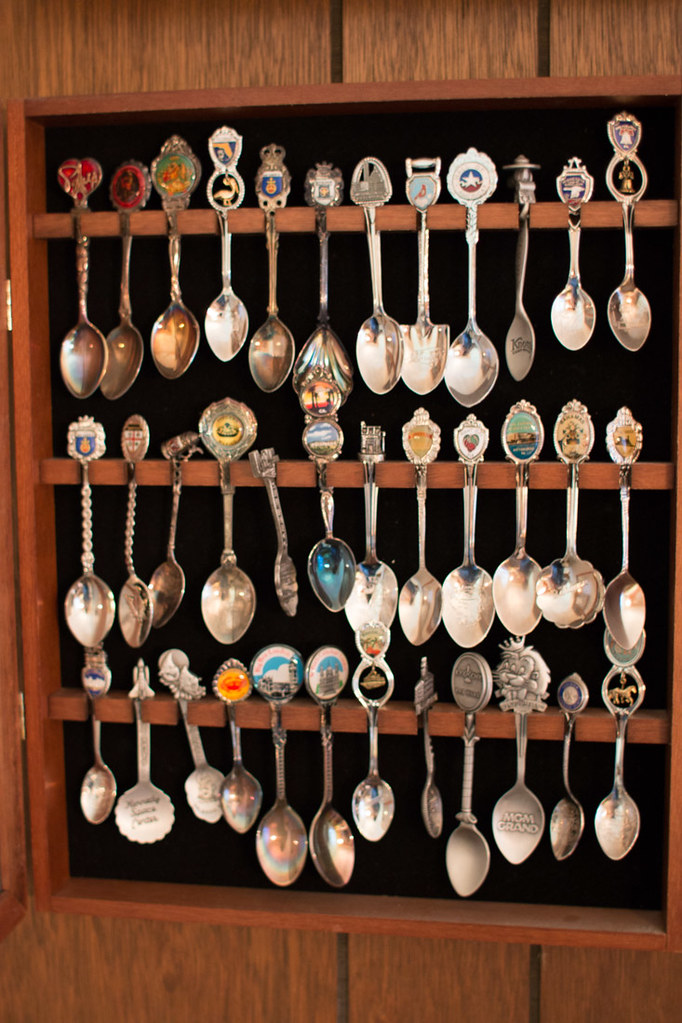 So, after considering many different options for displaying my spoons, I kept coming back to this image as inspiration that I found via Pinterest. I really liked the display option. Clean, modern, uncluttered.

But, unfortunately the photo was sorely lacking in any sort of explanation or tutorial about how the spoons were mounted. After trying many different solutions (all of which failed), I settled on plain old hot glue. (I’ll talk more about my experimentation with different materials at the very end of the post).

First, I bought some shadowboxes. After many MANY trips to places like Michael’s and AC Moore, I concluded that A) Pretty much every shadowbox was poor quality. B) Despite being poor quality, large shadowboxes were still quite expensive, even when using Michael’s regularly-offered coupons. C) And finally, even ignoring the quality and cost, I couldn’t find a shadowbox in a wide enough size that I was hoping for.

So, I ordered a custom size shadowbox from PictureFrames.com, and I was really pleased with the quality. They weren’t exactly cheap, but they were exactly the dimensions that I wanted, they cut a high quality mat precisely to size, and the frame and glass were great quality.

In case anyone is looking to get something similar, this is what I ordered:

First, I laid out the spoons on the white suede mat until I found an arrangement that I liked. I staggered the spoons from the approximate middle of the matboard, which I thought looked nice considering that they vary so much in side. 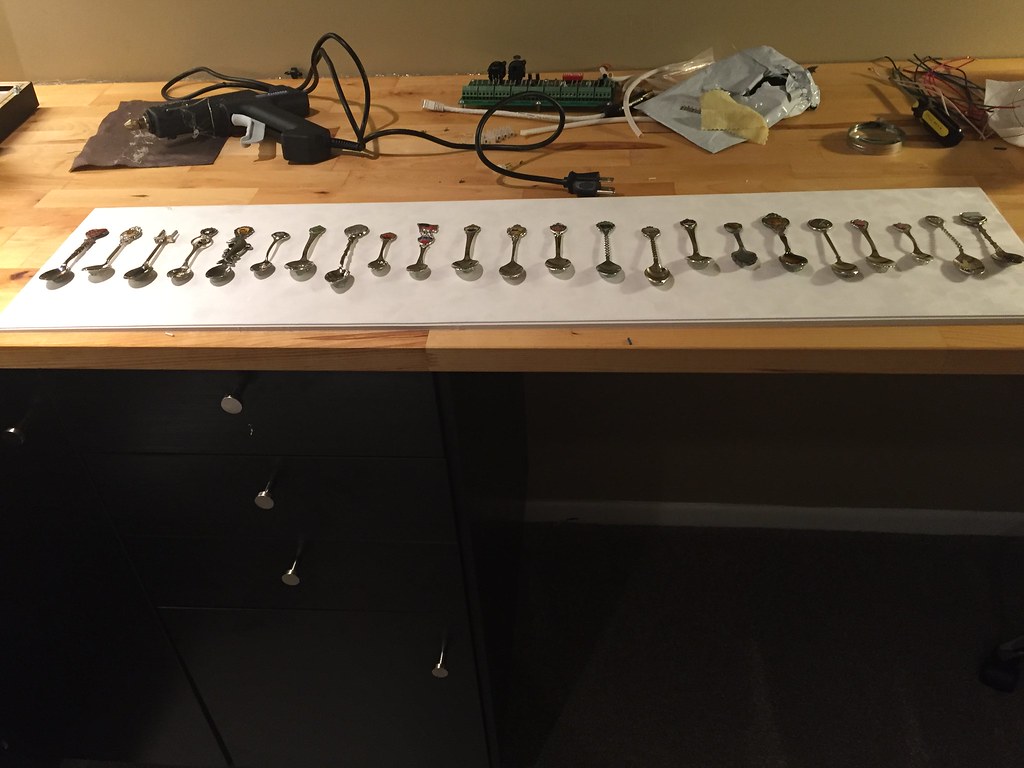 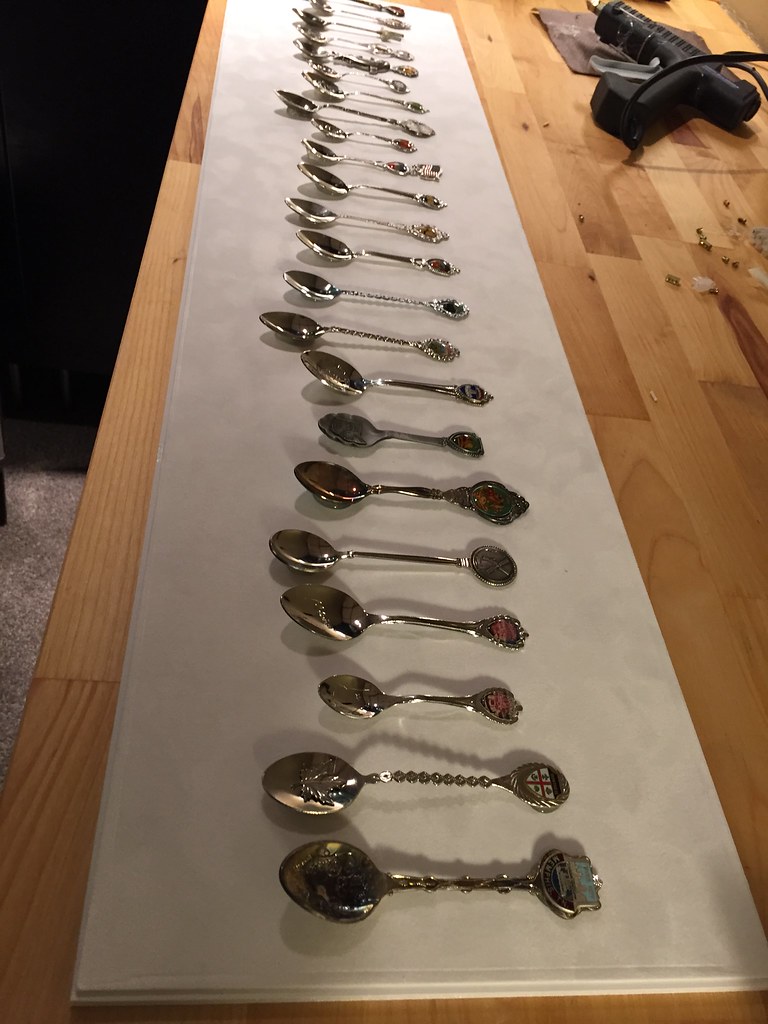 Next up, it was time to hot glue the spoons to the mat. Using the tiniest dabs of hot glue that I could manage, I put a dab on the “most convex” part of the spoon (is that a thing?). Basically the back of the spoon that has the most surface area that would touch the mat. Then I also put a tiny dab of glue on the top of the spoon. This part was really tricky for some of the spoons that had dangling ornaments in that area. 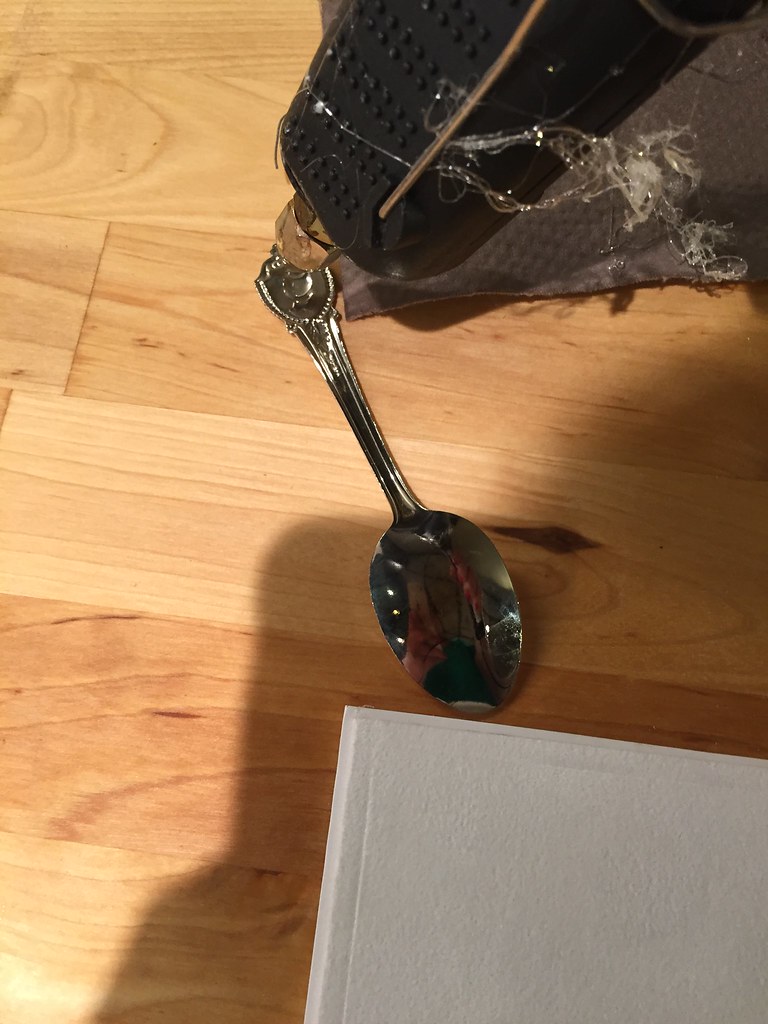 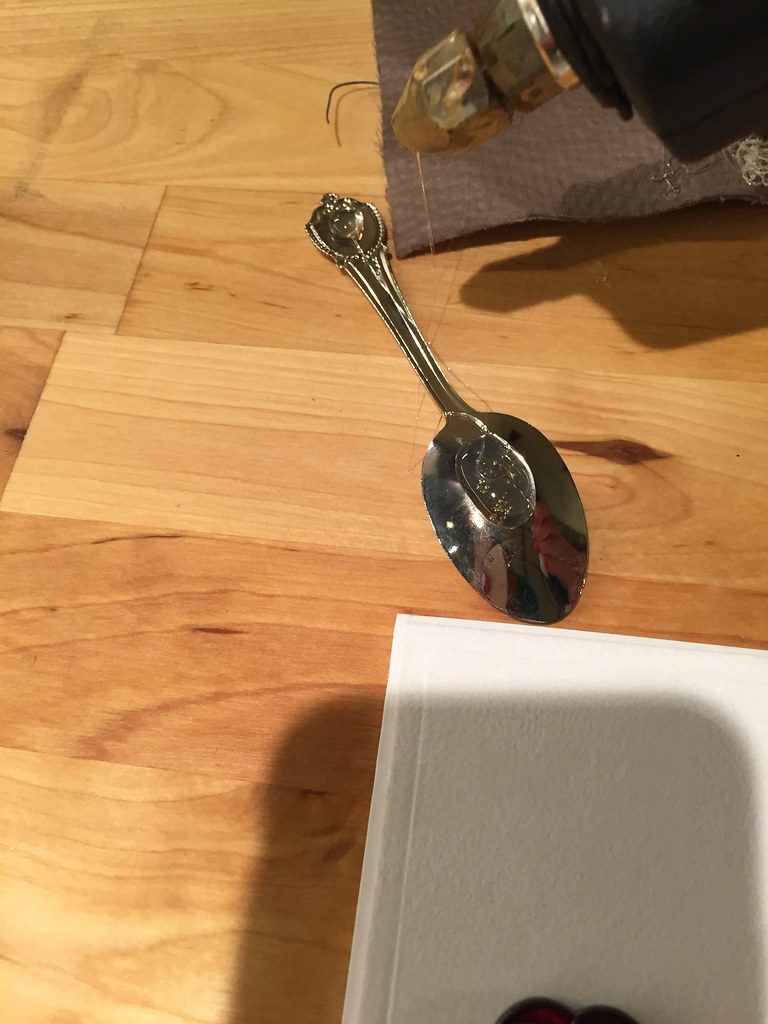 I repeated the process for each spoon, until all the spoons were glued to the matboard. Then came the process of cleaning up all the little hot glue boogers and strings. This was fairly tedious, looking for mostly translucent pieces of glue against a white background. I had the most success when I pointed an adjustable floor lamp directly at the matboard. The hot glue strings would create shadows on the matboard, and I was able to clean off even the less obvious pieces. 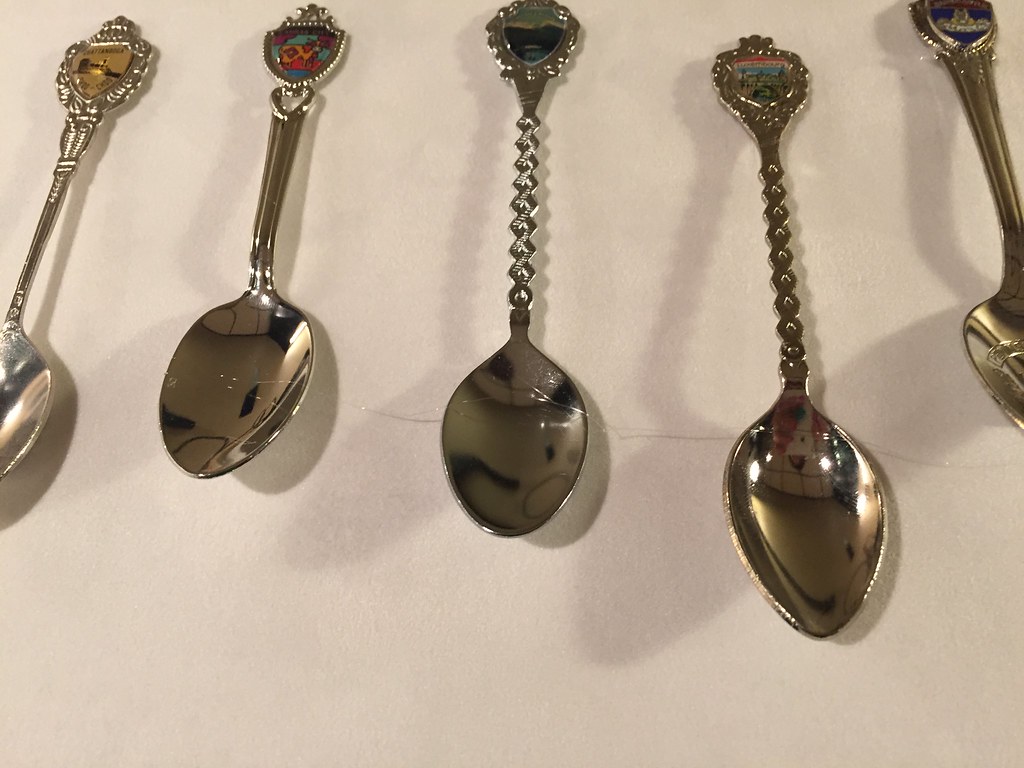 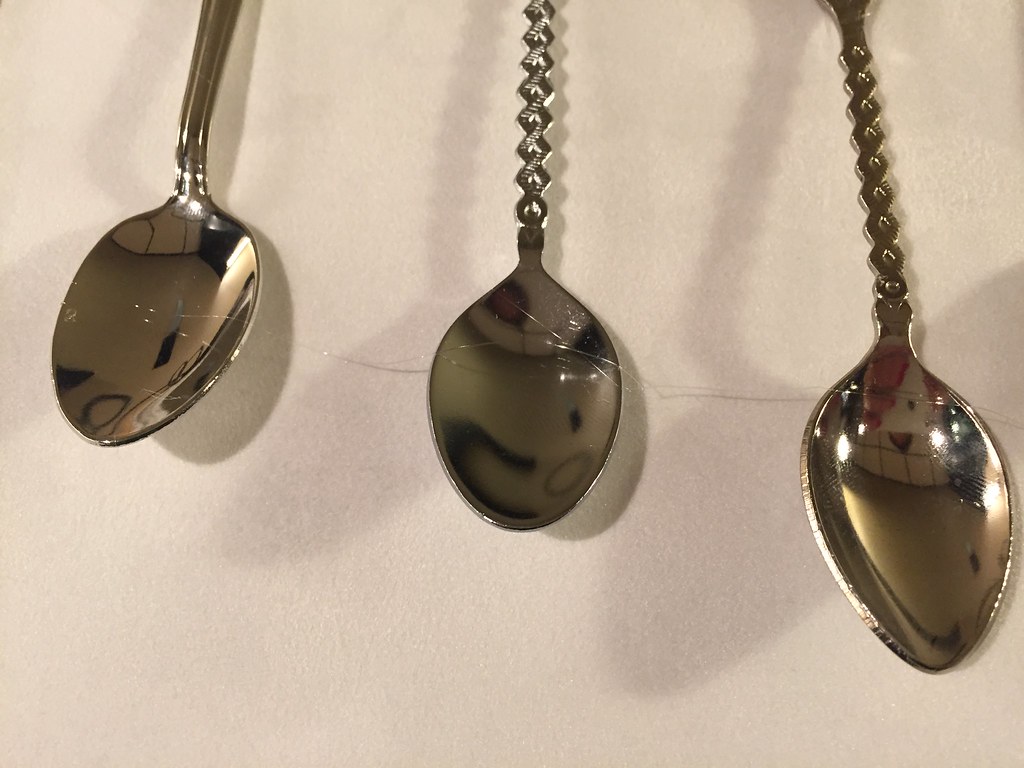 I bought two total shadowboxes, which are at different spots around the house now. Here’s one leaning on a ledge shelf in our basement. Pretty snazzy! 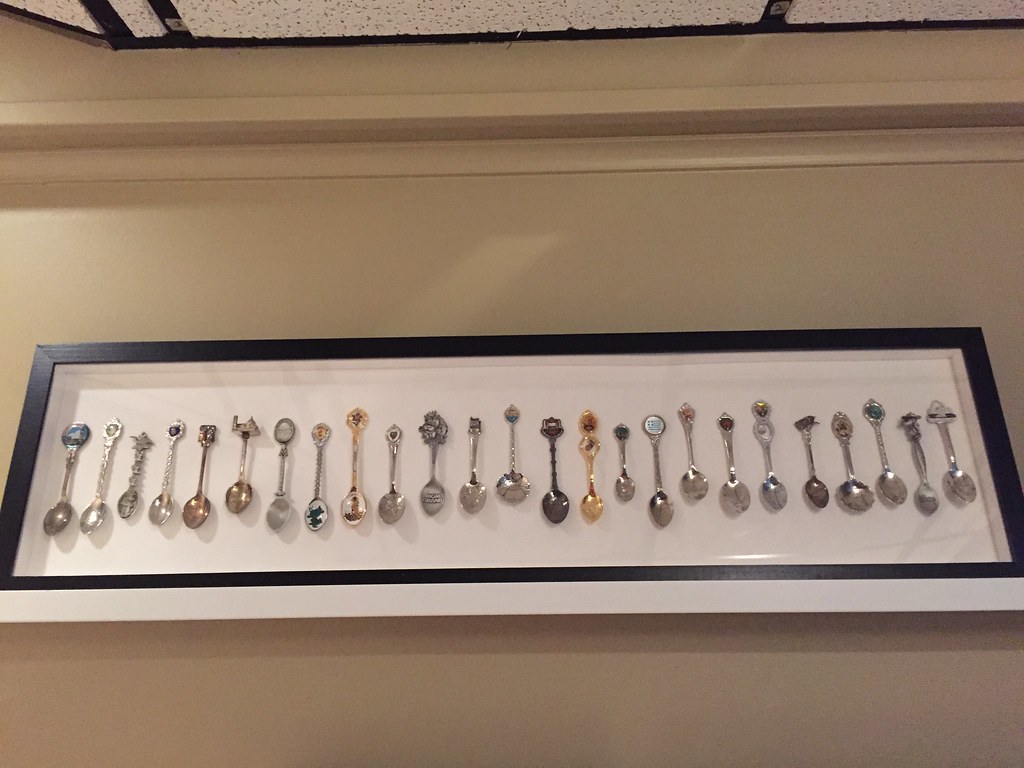 And much better than the old display, don’t you think? 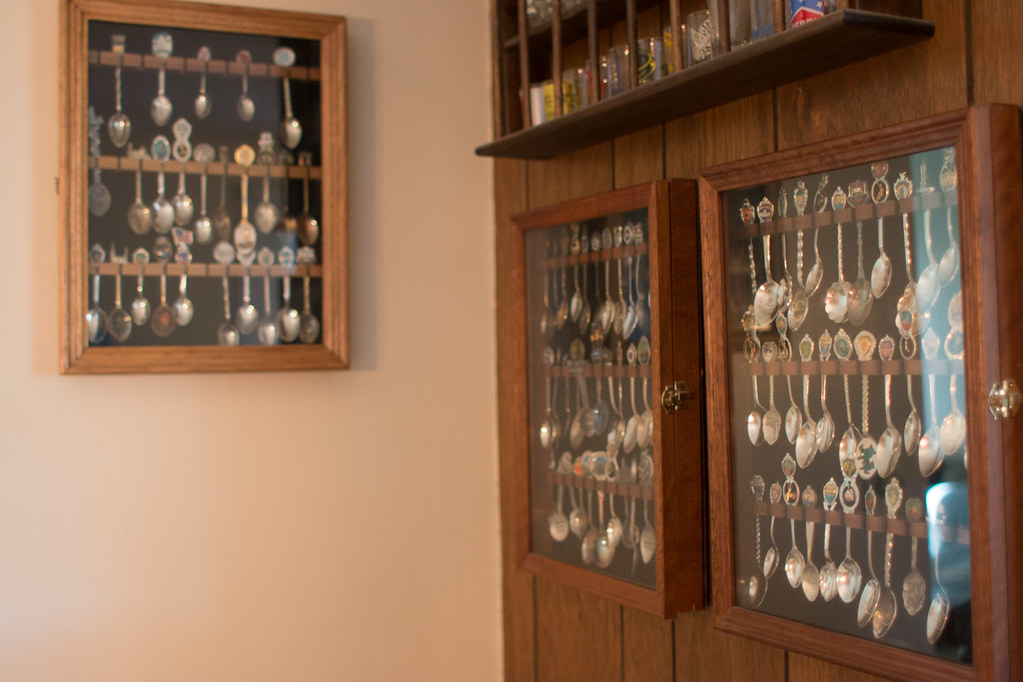 How I decided what materials to use

This project took me FOREVER to finally implement. Mostly because of how many options I mulled to mount the spoons.

In the inspiration image that I shared, it looked like the spoons were mounted using some sort of clips. Well, after searching high and low, I did finally find and order something that looked similar. Unfortunately, the clips were way too big for most of the spoons that were narrow.

Next, I tried an option that I hadn’t been crazy about … hot glue. I was so afraid of permanently damaging my spoons. Or, if I ever wanted to disassemble the frames, bending or ruining the spoons if I tried to remove them from the matboard.

So, what I did was I looked for a spoon that didn’t have much sentimental value. It was from a location I had never visited, and had probably been given by a family friend who had gone on vacation somewhere. I couldn’t even remember who would have given it, so clearly there was no sentimental connection to the spoon. I used some hot glue and glued that spoon to a scrap piece of matboard. And, I let it dry. A few days later, I was able to easily “snap” the spoon off the matboard. Yes, it ruined the matboard, but not the spoon. And, I was also easily able to scrape off the hot glue on the back of the spoon without damaging it or bending it. I tried it for all the other remaining spoon materials, like the pewter spoons too. Zero damage to the spoons, all very easy to remove.

So, I was sold. No, I don’t know if there might be very long term damage thanks to the hot glue, but that’s a risk I’m willing to take to put my spoons on display!

I was wondering If the spoons were showing any type of damage from the hot glue?

Nope! Like I mention in the post, I’m definitely no archivist, and wouldn’t recommend this for anything that absolutely couldn’t be marred. But, after my first few experiments, I was able to “pop off” the hot glue from the back of the spoon pretty easily.

Hi there I am collecting spoons as well and I am planning to discay it soon in my kitchen. I am wondering where you got that kind of shadow box? Is it custom made? I can only find small ones. Thanks

Yes, details about the shadowbox is in the 2nd paragraph in the “tutorial” section. I ordered it in a custom size from PictureFrames.com

Your display looks fantastic! I have Welsh Love Spoons I want to display. They are hand carved wooden spoons. I’m not sure how to attach them to the mat without damaging the wood and haven’t seen any tutorials that might help me. In your search for display ideas, did you come across any tutorials that might be helpful for my project? I spoke with a framer at Michaels and she suggested clips or threading. Can you tell me where you found the clips you mention? Thanks in advance for any tips you may have.

Sure, it didn’t work for my needs (the clips were way too big), but here is where I bought them: http://www.mighty-mounts.com/Spoon-and-Object-Holder.php. It’s called a Spoon / Object Holder Mount.

Love how your spoon display looks! Would like to do something similar with mine, but find that they tarnish easily and I have to clean them several times a year. Do you have any problems with tarnishing or did you treat the spoons with something to prevent that problem?

Hi, I generally don’t worry too much about the tarnishing. I think it adds character! But, most of my spoons are not “real” silver, so the tarnishing is not nearly as bad as someone with an actual, valuable spoon display. But, I think if you took the spoons out of the frames (leaving them attached to the backing), that you could do some light buffing while they’re still attached.

Did you buy 2 inch deep shadow boxes or 3?

Hmm, you know, the depth isn’t on my order confirmation. I’m guessing it’s the 2 inch deep.

Love what you did with your spoons. It’s perfect. I’d searched the internet looking for a display case that would house all of them and found it limiting and there are some of odd sizes as well. My neighbor started my collection over 30 years ago with a trip to Poland to see the Pope. I’ve been collecting ever since. She recently passed away and reorganizing and re-displaying the spoons would be a perfect honor to our precious friendship and my memories of the best “Neighbor” in the World.

Thank you so much for sharing the whole tedious process. ESPECIALLY your hot glue test. I call my spoons my old lady collection and love them. I also get spoons from exotic locations I just get normal spoons usually from coffee or tea sets but of course there is no way to tell where they’re from. What I love, is with your method I can lable where their origin.

Love your post Melissa, at last a Pinterest topic with the How-To, good on you, wonderful.
I have just started gathering, not quite collecting, (yet) spoons, I had the same attitude growing up as Amina did, only old ladies, here we are!! go figure?
Quick tips from you and maybe other readers, I’m in Australia so often yours/our store supplies will differ, but I am at the stage of handling the spoons and cleaning them, I’m a bit inclined to use some for display and maybe sell, not sure yet.
I have seen the bi-carb, aluminium foil and hot water method, just wondering how that goes with the stuck on designs?

Lovely to just spend time pouring over the wonderful designs and appreciate the ideas.
regards
Bryan

PS
I had the idea of cleaning and then storing the cleaned spoons, looks like I need to get some of those cabinets, as a temporary storage idea, then sell or keep them.

Awesome job Melissa…. love what you did.
I’m a 50 something racing driver and collect spoons…. so just goes to show, hahaha
Cape Town, South Africa.

I’m in the process of displaying spoons and came across your display – looks great! I’ve been hesitant to use hot glue and bought some ‘Scoth Removable Mounting Putty’. I’m curious if you tried this method and how long the spoons would stay stuck?

I have not used it, so I’m not sure how or if it would work, sorry! But, I’d say you could always start with a small scale experiment. Use the putty to mount one spoon on a cheap frame, and see if it holds for a while. Good luck!

Hot glue, you are a genius. I have a collection of old pins and broaches several without the pin part that I’ve been wanting to mount in a shadow box. I was at a loss how to do it. Will be hot gluing in a day or two when I get all the supplies together. Thanks