Two weeks ago, Ken and I spent a long weekend in New York City. I had been hoarding a lot of points recently, and decided it was time to redeem some of them. Plus, I had really been itching for a vacation. We went on an amazing Southwest USA road trip for two weeks in Fall 2012. Shortly after our return from that road trip, I redeemed some American Airlines miles for an off-peak award to Belize scheduled for April 2013.

Unfortunately, in between those two trips, tragedy struck our family. My parents were in a serious car accident. My mother died on the scene, and my dad was airlifted to a trauma center where he thankfully survived. Needless to say, both Ken and I took a lot of time off work. So, we decided to cancel the April trip to Belize, and I had our AAdvantage miles refunded.

In the subsequent months, I had tried to plan other long weekend trips, researching places like the Bahamas Out Islands and Key West, but I had one family emergency after another that prevented me from being able to go somewhere and relax. Although we typically take a long vacation in the fall, we decided to skip a big fall vacation for 2013, since we already had our Russia trip planned for February 2014.

By July, I was getting anxious to plan some sort of vacation, and we decided that New York City would be a fun weekend getaway. Although we had both been there before (albeit separately), we were both broke college students during our previous visits. So, it would be nice to actually afford to go to museums like the MoMA! (Spoiler alert: We never actually made it to the MoMA.) New York was also close enough that I could return home in case of some other family emergency. We picked out a weekend in the Fall, when the weather would be crisp and the foliage beautiful, and started making reservations! 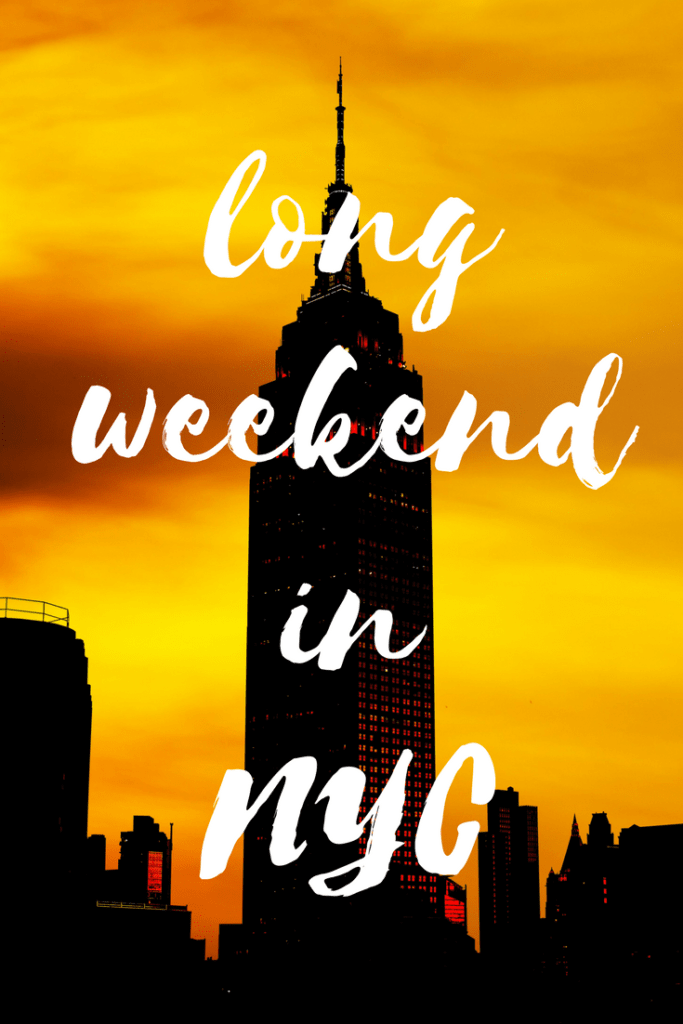 Next up were transportation options. The easiest transportation between DC and New York City is Amtrak. Trains to New York were very reasonably priced for our desired Thursday evening travel, so it didn’t make any sense to use points. We just paid the $49 per person and booked our tickets. The Sunday night return, however, was much more expensive, approaching nearly $200 per person for just the Amtrak Northeast Regional Train.

Since part of the fun of points is redeeming them for new and fun experiences, I decided to book our return train in Amtrak Acela First Class. I’ve never taken an Acela train before, let alone Acela First Class. And since Amtrak Acela First Class tickets were about $350 per person, so I thought it would be a fun indulgence. I tempered my expectations though, as many people complain that the Acela trains, which are touted as high speed, really aren’t that much faster than the regular Amtrak trains. I’ve taken high speed rail in both Japan and Europe, so I knew that Acela would be no Shinkansen. But, I still wanted to give it a whirl.

Amtrak is also a 1:1 transfer partner of Chase Ultimate Rewards. I knew that there are a handful of weekends that Amtrak excludes points redemptions, so I double checked that our desired travel date wasn’t one of the blackout dates. I made sure to do this because Ultimate Rewards transfers are not reversible once they are made. For instance, if I had transferred my Ultimate Rewards points to my Amtrak account and then was unable to redeem them for my travel date, I would not be able to “return” the points to my Ultimate Rewards account. They would have to stay in my Amtrak account, which would be unfortunate because I don’t travel Amtrak much. After confirming that our dates were not on the blackout list, I took the next step. One way Acela First Class tickets are 12,000 points per person, so I transferred 24,000 Ultimate Rewards Points to my Amtrak Guest Rewards account. Then I immediately made our reservation.

Of course, like any draft itinerary, things changed as our trip progressed, and there were a few things we had to skip, but overall it was very successful!

My Experience Applying for Global Entry and TSA Pre-Check

[…] were planning a trip to Belize (which we had to subsequently cancel.  I talked about that briefly here), and since many of those hotels were going to require non-refundable deposits, I was going to […]