It’s been a scary few weeks here on the homefront.  Two weeks ago, I went for my routine annual physical.  It went fine during the physical. Exercise more, try to lose ten pounds by next year, all the standard stuff.

The doctor also ordered bloodwork labs, which he does every year.  Well, everything came back normal except for one big outlier – my platelets.  They were pretty low.

Platelets should be in the 140-400 range.  Mine were 34.  I’ve never had platelet issues before.  (For reference, my platelets were 297 during my 2017 physical, and 300 during my 2016 physical. In all prior years, they’ve hovered around that same amount plus or minus 30 or so).   Apparently some consider it a medical emergency if platelets drop below 20, as it can cause spontaneous bleeding or hemorrhaging within the body. So, with mine being at 34, I was pretty concerned.

Dr. S (my primary care physician) called and asked me if I had had any recent viral infections or had started any new medications recently.  I told him the only infection I had had recently was a bacterial one. I had a UTI about a month earlier, and had been prescribed a 5-day-course of the antibiotic Macrobid.

Dr. S said okay, sometimes antibiotics can affect platelet counts, so come back in to have the bloodwork redone in ten days to see if my platelet count improves.  I said okay.

I don’t think I could use another search phrase to make the term “Leukemia” appear in Google search results any more than “low platelets.”

And, I learn that low platelet counts has a more formal name.  Thrombocytopenia.

The next ten days were torturous.  At a certain point I just stopped Googling things because there were too many unknowns:

Upon learning these things (through my random Google searching), I stopped all alcohol imbibing, stopped drinking soda, and cut out all caffeine as well.  I decided to eat super healthily and hoped that it would have an improved effect on my platelet count.

I was really hoping that it was perhaps just a combination of the Macrobid and recent wine drinking that kept my platelets low.  And hoped that that, as time passed, my platelet count would improve.

Torturing Myself with Speculation

But, in the back of my head, I knew that the Macrobid/Wine combination probably wasn’t the reason.  Because, the more I thought about it, the more I remembered the appearance of unexplained bruises on my thigh and knee that I was pretty certain pre-dated my Macrobid round.  They were completely painless bruises which I thought was unusual, but not enough to raise any red flags.

Then I thought back to a few months earlier and doing Yoga.  During certain poses, like downward dog and cat/cow, my nose would start to drip this orange-tinged runny mucus.  It had never happened before. I convinced myself that it was just because I had had a cold a few weeks earlier and that it was probably some weird post-nasal drip thing.  I had told myself that if it continued for more than two weeks or so, that I’d see my ENT doctor. It sounds gross, but I actually filmed it when it was happening just so I would be able to show it to my doctor because I didn’t want to have to do downward dog in a examination room to show him. But, the orange nose dripping thing went away within two weeks and never came back.

So, again, I’m not sure if that was related, but I was just racking my brain trying to think of other random “symptoms” I might have been having these past few months.  I had also noticed in the past few months too that it seems like I’ve been losing more eyelashes than usual. But, that was just something I had chalked up to getting older, and perhaps a formula change in one of my eye makeups.

Getting the Bloodwork Re-Checked

I went back in to have my platelets re-checked at my primary care doctor. Lo and behold, they were even lower this time, down to 28 from my count of 34 ten days earlier (again, platelets should be in the 140-400 range).  My doctor referred me to a hematologist, and I was able to get in for a same day appointment.  I’m writing this particular section in the hours before my appointment later this afternoon.

The day after I had gotten the initial low platelet results, I started to have a fairly dramatic pain in my right side.  You might remember that I had a kidney stone back in 2013. This pain definitely felt “different” from that kidney stone, but it was still painful.  The pain, coupled with the alarming test results of the day before, led me to imagine horrific internal bleeding that was causing the pain. So, around midnight on a Friday night, Ken and I are driving to the ER.  They did a urinalysis and and a abdominal CT scan, and didn’t find a kidney stone. On the upside, the CT scan found that all my other abdominal organs were normal too. I had read that Thrombocytopenia can cause things like an enlarged spleen, or may also been seen with liver inflammation.  But, both the spleen and liver (and everything else) were all good. So, in a way, the CT scan and trip to the ER calmed my fears a bit. But, just a bit, not much.  The ultimate diagnosis was that I likely just had some muscular pain. 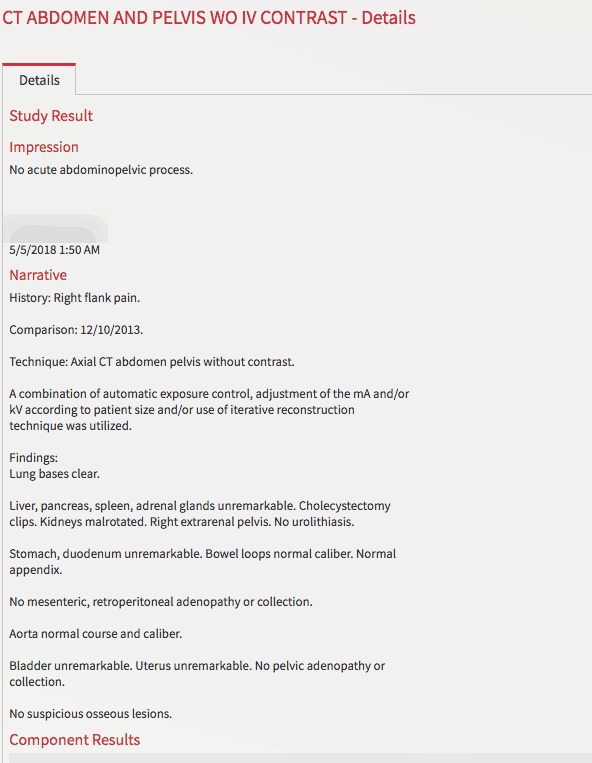 Okay, I’m back from my Hematology appointment. That is literally the longest I’ve ever sat face-to-face with a single physician in my entire life. We probably had a 40 minute discussion. She basically wanted to hear about any change or symptom that I have experienced, no matter how minor.  I told her about seeing an ophthalmologist back in 2016 for an ocular migraine (I thought I had blogged about this in a Friday Randomness post, but I guess not!).

I told her about seeing an optometrist last year for some sudden and dramatic dry eyes and some increased “halo” vision, especially at night. I told her about being in contact with my dad in the days prior to his diagnosis with a antibiotic-resistant bacteria called ESBL. I also told her about the other things I mentioned up top, like the painless bruises and the UTI. (Although those are fairly regular occurrences for me). I get one every few years it seems like), the weird nose drips, and the eyelashes falling out.

It’s funny, typing these things out here all make me sound or seem very “sickly.”  But in general, I feel fine. And, many of them I just contributed to the joys of getting older.  Obviously, for the symptoms I thought might have been concerning, like the dry eyes and other vision issues, I saw a doctor within a few weeks of its onset, and was given a treatment plan (warm compresses and large doses of fish oil) and the all-clear from the optometrist.  And, after my dad’s diagnosis with ESBL, I asked his doctor if I should be concerned about my contact with my dad, and the doctor said no. So that was good enough for me.

The hematologist also wanted to know all about my family history. I told her that my mom had a breast cancer diagnosis at 52, that my paternal grandfather died of colon cancer at 62, and that my dad has rheumatoid arthritis (an autoimmune disease).

The hematologist said that since my platelet counts were quite low at 28, that she was starting me on a treatment — 40mg of dexamethasone, a oral corticosteroid, per day for four days.  Since the largest dose of dexamethasone available is 4mg, that means I’d have to take ten pills at a time. I’d have to come back on day three of the treatment for a another CBC (Complete Blood Count) blood test to see if the medication was improving my platelet counts. 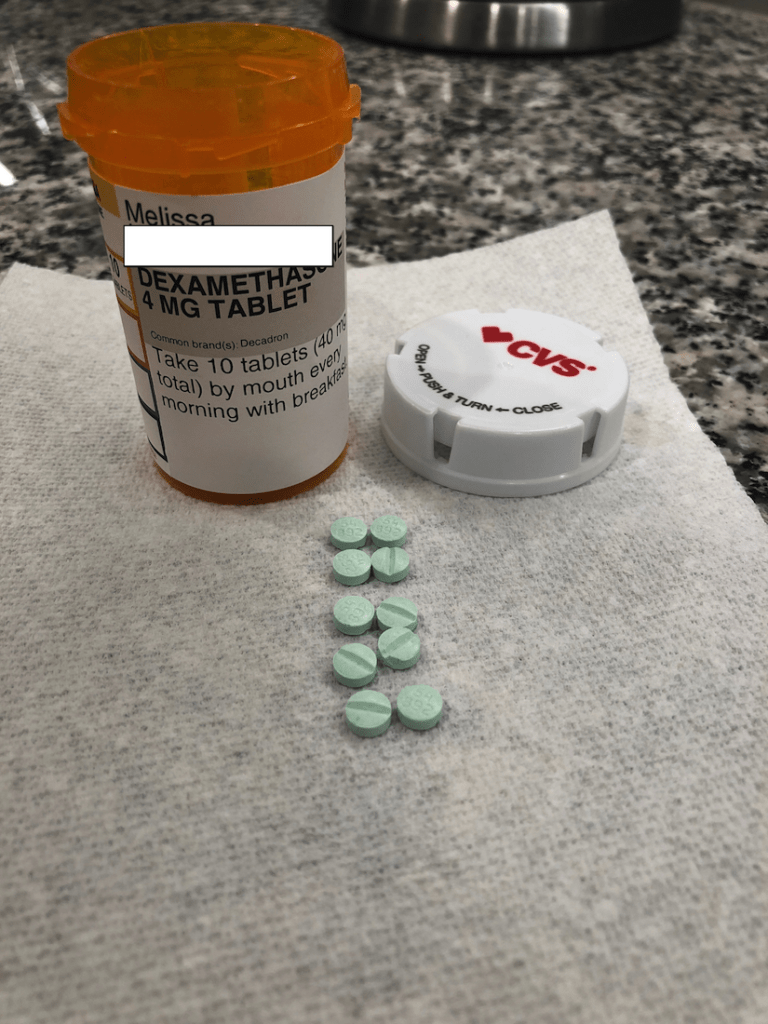 Then, the Hematologist did her own physical exam.  Listened to my chest and back with a stethoscope, pushed on my abdomen, examined my lymph nodes and examined my skin briefly.

I asked her if there was anything I could do diet-wise to improve my platelet counts.  Like any particular foods I should avoid or increase. She said no, at least not until we have a better handle on the root cause of the platelet issue.

The doctor ordered TWELVE VIALS of blood to be drawn.  Here were all the stickers printed that went on the individual vials of blood: 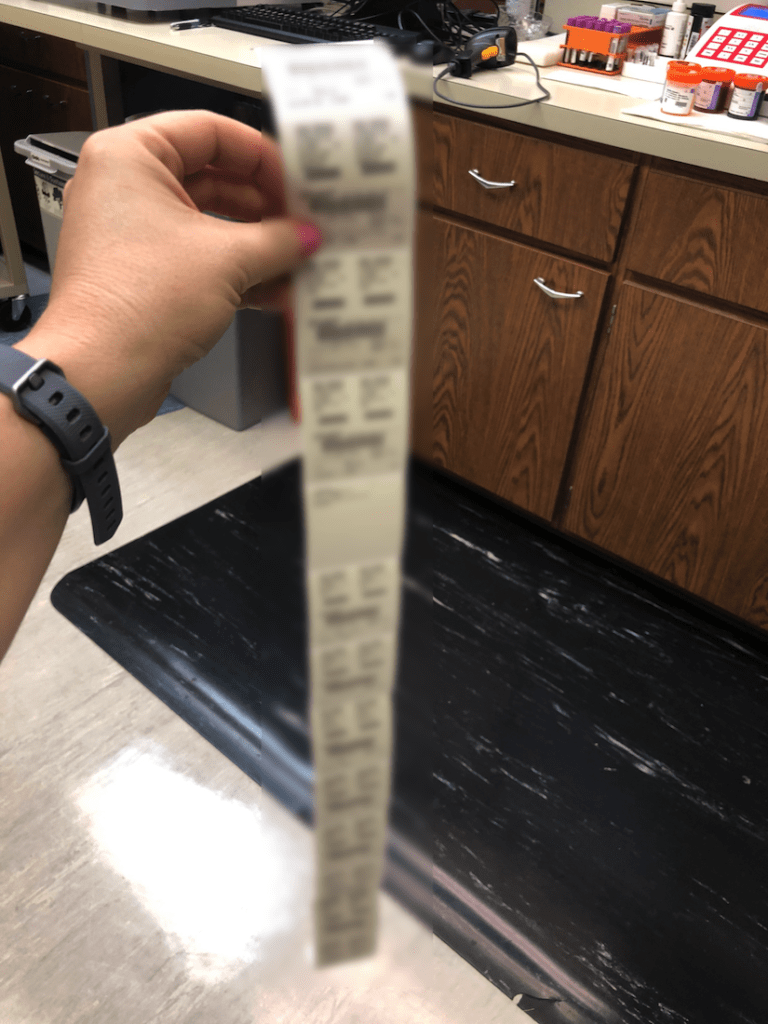 The hematologist went through general explanations of the types of tests she was ordering.

And now, I wait.  And be thankful for how amazing science and medicine is.  When we were on our way home from the hematology appointment, Ken said, “You know, it’s kind of amazing.  You’re only sick on paper.”

And that really stuck with me for some reason.  Here I am feeling fine. No fatigue or fevers or anything else that I would consider strikingly “wrong.”  The only reason I know something is wrong with me is because some results from a lab tell me that something is wrong.  And I think that’s pretty amazing. Because whatever it is, serious or not, that gives me enough time to start to beat this thing with a stick before it actually becomes symptomatic.

Have you ever had scarily low platelet counts or other scary things in your bloodwork during a physical?  How did yours turn out?

Yet Another Low Platelets Update – Is it...

An Update to my Low Platelets Scare