Ken and I have lots of ongoing projects in our house.  Which means we have a lot of STUFF. Small parts, large parts, short cables, long cables, spare computer parts, and normal tools and hardware. 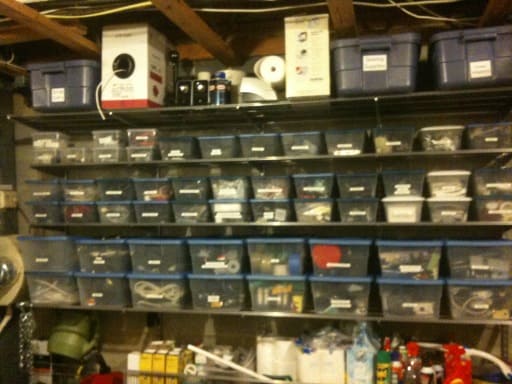 But I will say that there was one pivotal moment that helped us get our “stuff” organized.  Ken and I had been living together for over a year (about 3 months in his one-bedroom apartment, and after that in our town home), and I realized that I never knew where anything was in the house. Ken had his “system” for organizing stuff, and typically he knew where things were.  So if I needed an extension cord or a screwdriver, or whatever, I always had to ask Ken it was.  And it drove me NUTS.

He kept things in large blue bins and some Ikea baskets on Expedit shelving (pictured below), but there were always multiple categories of things in each bin or basket. And there were countless “miscellaneous” bins.  I felt completely helpless and reliant on him if I needed to find something.  He concurred that his system was not optimal, but described himself as too lazy to fix it. So I stepped in.

In June 2010, I just started dumping out all his bins and baskets and organizing things into piles. Unfortunately I don’t have any photographs of the process, but it took about a month, working on it mostly on the weekends.  I organized things that looked similar into piles. I also had a “WTF pile” containing things that I could not figure out.  And Ken would help me categorize and organize the WTF pile.

Here are some of the Ikea Expedit baskets in the laundry room when our system was less than optimal.  While it might not look terrible, inside each basket was a disorganized mess.  Plus, the Ikea Expedit shelving was not very efficient because we have surprisingly tall ceilings in our laundry room, so the low shelving wasted a lot of that vertical space.  We also had some cheap plastic shed type storage things that were also completely inefficient. The pegboard was a great solution that we added early on, and the small red drawers were also great, but the drawers lacked labels. 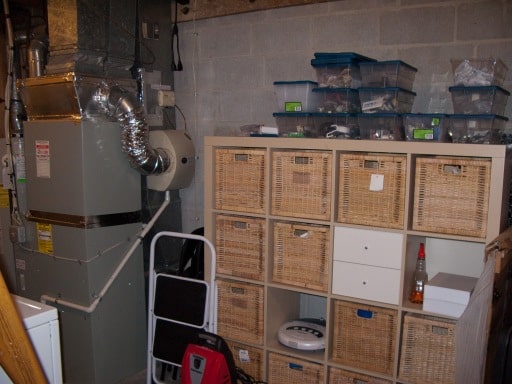 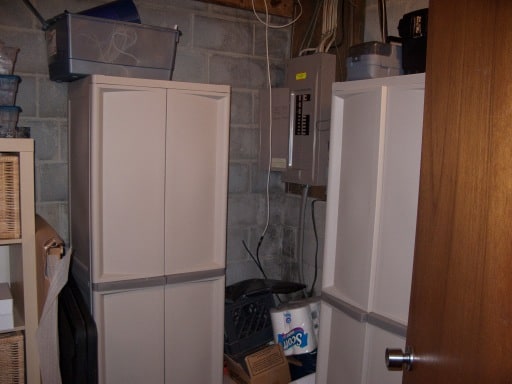 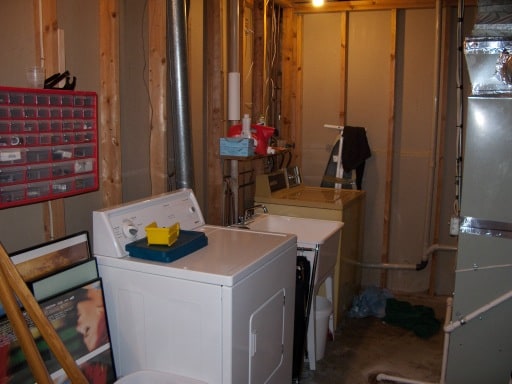 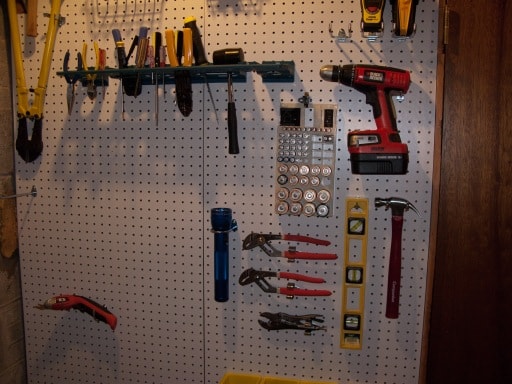 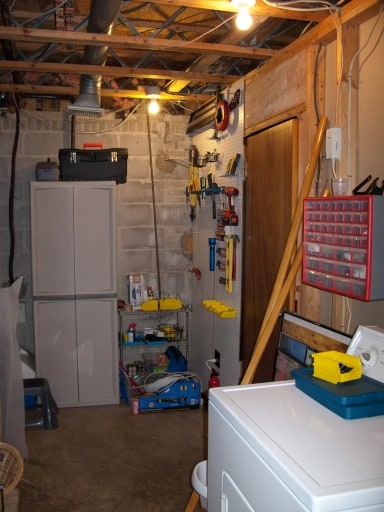 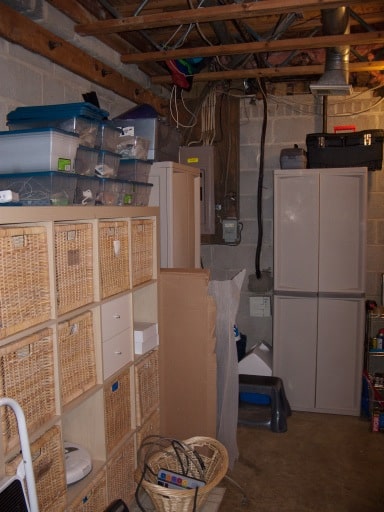 And here are some photos of Ken’s blue bins that took over our guest bedroom, both on the bed and in the closet. 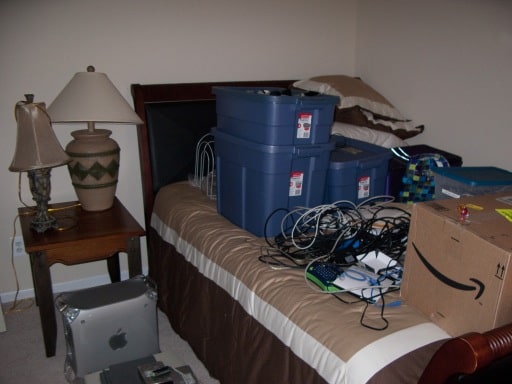 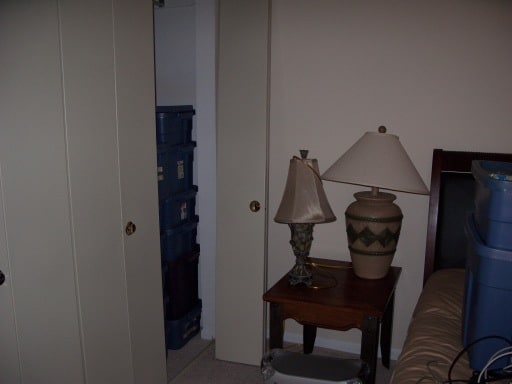 All of those photos were taken in late 2009.

We decided that we would create a shelving system in our laundry room to store our items.  We also realized that the blue bins, even the smallest ones, were too large for most of our needs. We converted our storage to smaller bins from Target, and only used the larger Rubbermaid Roughneck blue bins for much larger items.

We took a trip to the Container Store, and bought an Elfa shelving system, which we were already familiar with because I had an Elfa system desk and closet in my home office.

This was how our shelving system looked when we first put it together in the summer of 2010 and added all of our newly organized bins to the mix:

ONE MILLION TIMES BETTER than the old system, no?  (Forgive the crappy cell phone quality. I only have iPhone photos of the system from this iteration of our system).

That was in June 2010.  Over the years, we have tweaked our system and added even more shelving to our laundry room along the perpendicular wall.

We’ll talk more in future posts about what types of bins we use, what we keep in the bins, how we manage to stay on top of keeping everything organized, and how our organizational system has evolved. 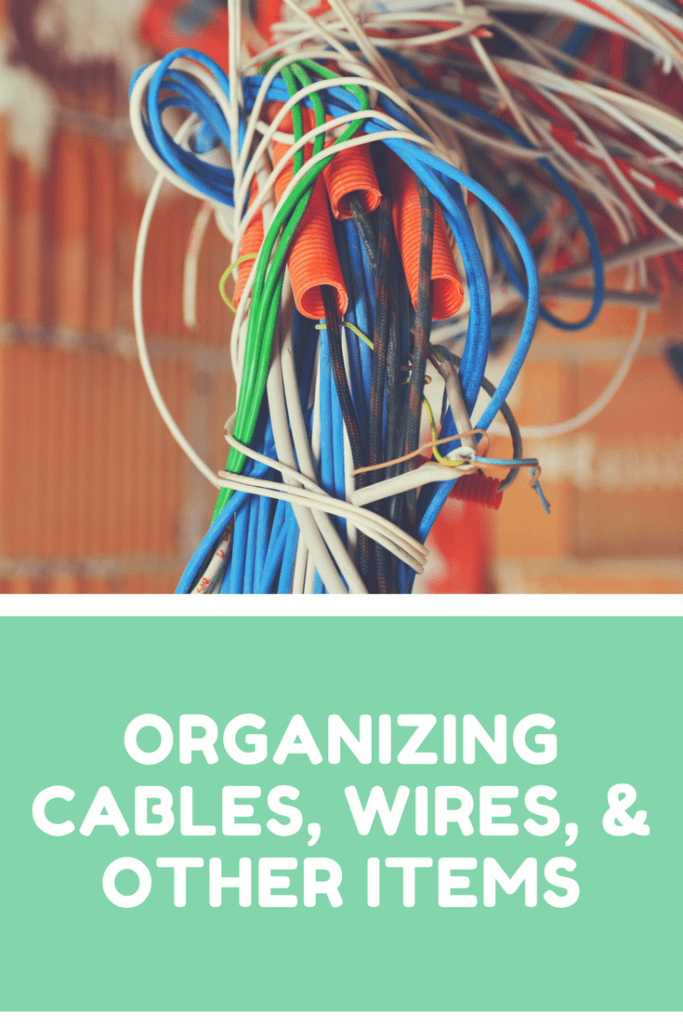 Celebrating One Year of our New Kitchen!

[…] of equipment that comes with an owner’s manual or user’s manual, I usually take it an put it in a bin that I have designated for manuals.  I don’t spend much time, (err, really any time) […]